As a new empire rises, the incumbent inevitably declines as a result. And so as Daniel Humm of Eleven Madison Park ("EMP") takes over the mantle as arguably the most influential chef in New York City, one would expect Thomas Keller to start fading away. This is not a controversial notion, after all, Thomas Keller has dominated the US fine dining scene since the opening of his flagship French Laundry in Yountville, Napa in 1994. Moreover, with the passage of time, some of the alumni from his kitchen have become giants in their respective geographies, notably Corey Lee of Benu in San Francisco, Grant Achatz of Alinea in Chicago and Rene Redzepi of Noma in Copenhagen. A changing of guard is a natural progression of things, and it was against such a backdrop that we visited New York City this year and had the chance to dine at both EMP and Per Se again (in 2012 when we were last here, Per Se was the top dog and EMP was the young upstart, having just won its third Michelin star).

This seemed to be further confirmed by the damning review from renowned New York Times ("NYT") critic, Pete Wells, in his uncompromising article in his paper in January earlier this year, where he unceremoniously dropped two stars from the four which Per Se had probably taken as a birthright for the last decade (the NYT ranks restaurants up to a maximum of four stars, in a rating system which is regarded in New York as having more credibility than the Michelin Guide). So when we got our reservation to have lunch here this time, we were both curious and trepidatious in equal measure: curious to see if and how Per Se would respond to the most public of dressing downs, and yet afraid that we would be wasting both time and money and be bitterly disappointed by the experience. 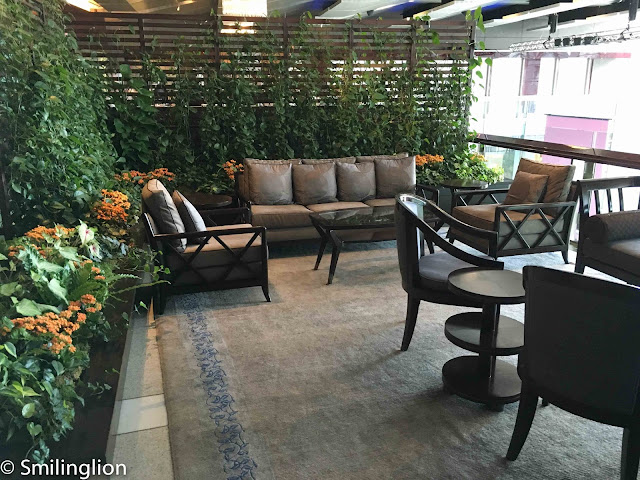 The last time we dined here, it was dinner and the ambience was quite different. Then, there was a very formal and older crowd, with the crackling fireplace (it was during the depths of winter) providing warmth in a toasty and dimly-lit dining room. This time, it was a gloriously bright and warm early autumn midday, and the atmosphere was much more relaxed, with a few tables even seating young children. We had asked for and were given a table with a nice view of the New York skyline and overlooking Central Park. 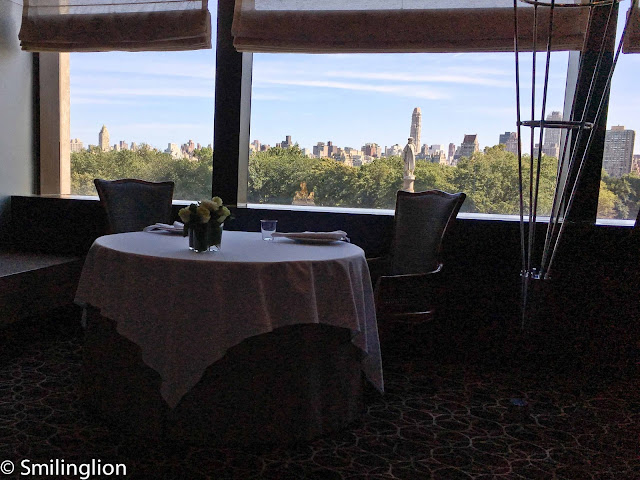 One of the subtle differences we noticed in our dining experiences in New York this time round was that all the fine dining restaurants we have been to no longer automatically offer champagne at the start of the meal. This could be a movement away from the usual French formal style of dining, with New York restaurants eschewing the snobbery associated with soft-pressurising guests to spend $40 on a glass of bubbly even before they have a chance to look at the menu. In fact, it also surprised us that most of these restaurants even offer tap water without being asked, which is a far cry from the days when the waiter would look upon a guest asking for tap water as if he was Oliver Twist asking for a bowl of soup.

Nonetheless, there is a time and place for champagne, and in a classy restaurant like Per Se and on a day as perfect as this one, we felt that it was appropriate to start off with a glass of Blanc de Blanc. With our champagne, we were served one of the French Laundry and Per Se classics, the cornet with salmon tartare and crème fraiche. 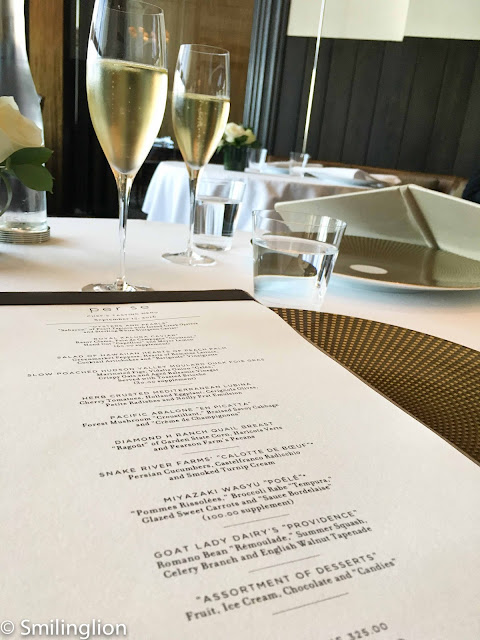 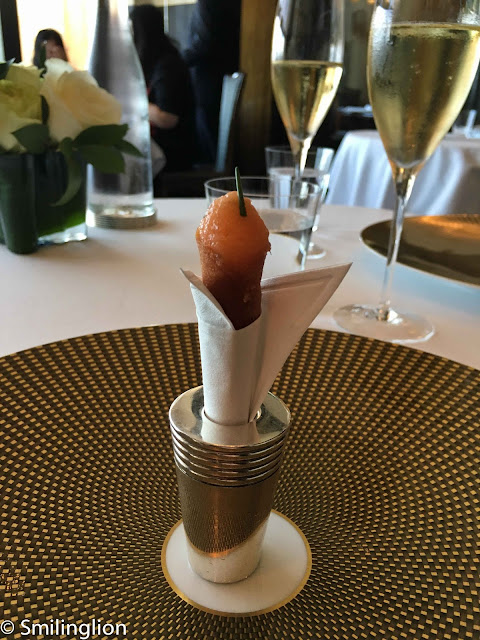 One of the recent innovations in fine dining is the use of the iPad in place of the traditional wine list in a book. Aside from the fun I usually have handling a phone directory-sized encyclopedia of wine, when I go through the list, I sometimes keep my finger on a few pages which have wines I have identified, so that I can go back to those pages when I need to decide. I can't do that with the iPad, annoyingly so. But I digress. The Per Se wine list (though it comes in an iPad) is very impressive, and reassuringly contains a wide selection of American wines from which I selected a 2007 Spring Mountain Napa Cabernet Sauvignon which was an excellent wine. One thing which has surprised me on this trip is the relatively small number of American wines in most wine lists (Per Se being the exception), which seem to be dominated by French and Italian labels. 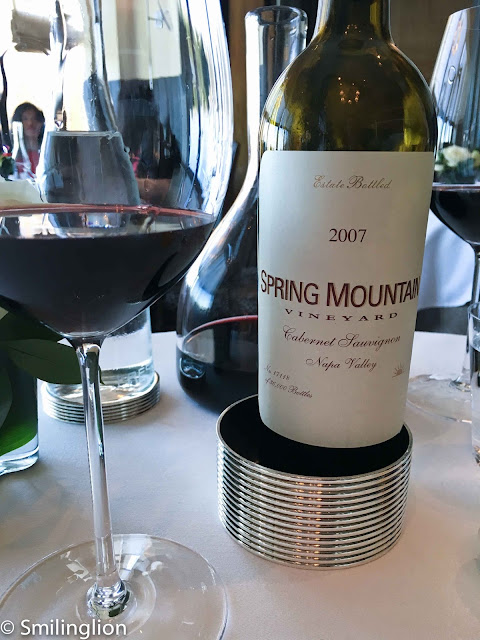 The first course was a choice between the famous Oysters and Pearls, which we have had before twice, and the Royal Kaluga Caviar, which we opted for this time. This was an amazing dish of the most generous dollop of caviar, on a bed of razor clams, Pain de Campagne "Croutons", hand-cut "Cappellini" and Meyer lemon. 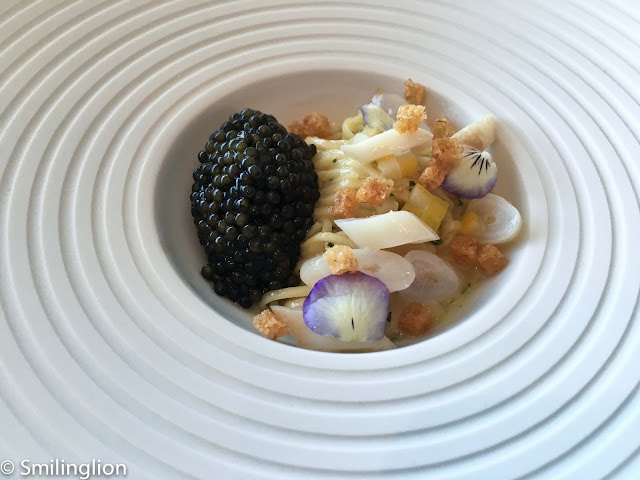 Another old favourite was the Slow poached Hudson Valley Moulard duck foie gras. This was paired with a delicious chocolate brioche and six kinds of salt (each one of which we tried with the foie gras). This time the foie gras had less pungent flavours than we were used to; it tasted a bit more like a chicken liver. The marinated figs, Visalia onion "geleé"; crispy oats and aged balsamic vinegar were  appropriate accompaniments to the liver. 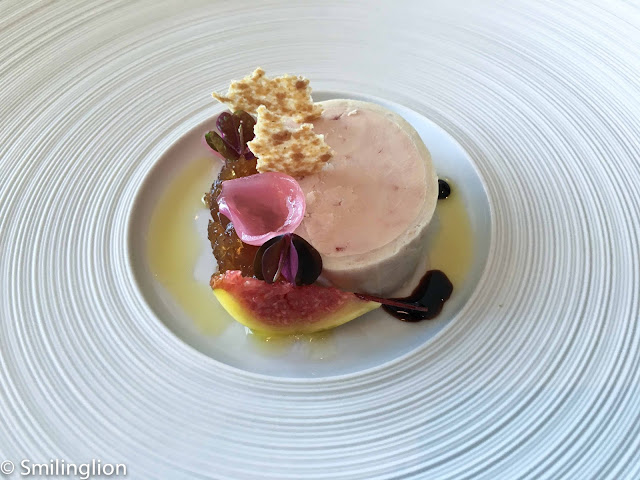 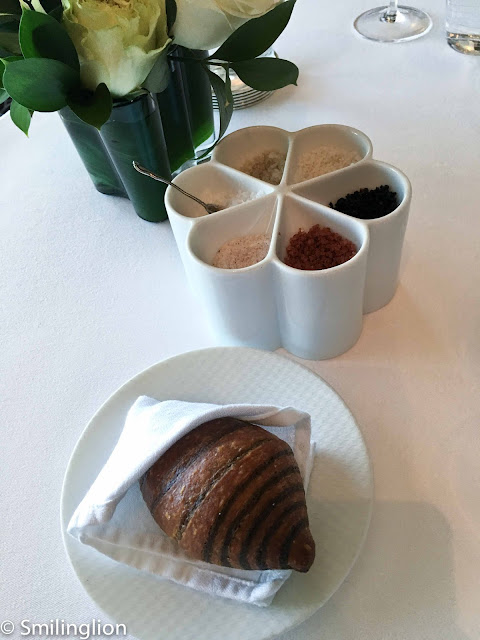 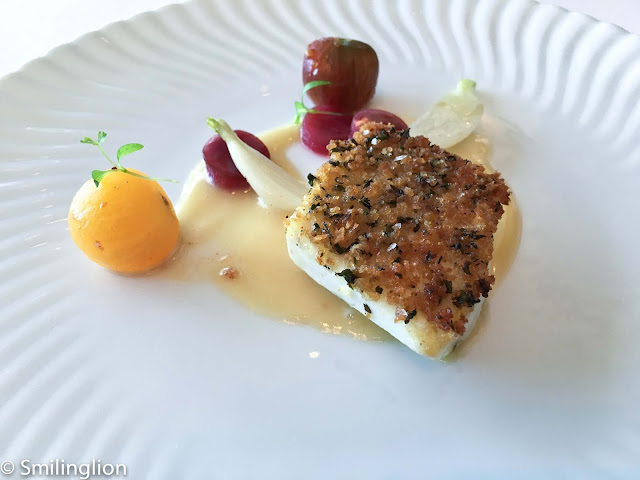 One of the highlight of the meal was the impressive Pacific abalone "En Picatta". The abalone was so soft and fresh without being too chewy, and the earthy flavours brought about by the "Créme de Champignons", the sourness provided by the "Braised Savoy cabbage" and the crispiness from the Pacific Mushroom "Croustillant" completed the perfect dish. 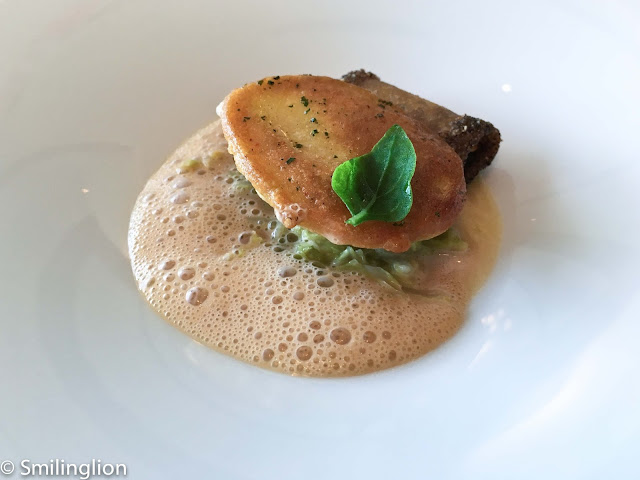 The meal got better with the incredible Diamond H Ranch quail breast which was tender and juicy on it own but was brought to another level by the deep umami flavours of the deglaze, the "ragout" of Garden State corn, Haricots Verts (fancy term for green beans) and Pearson Farm's pecans. 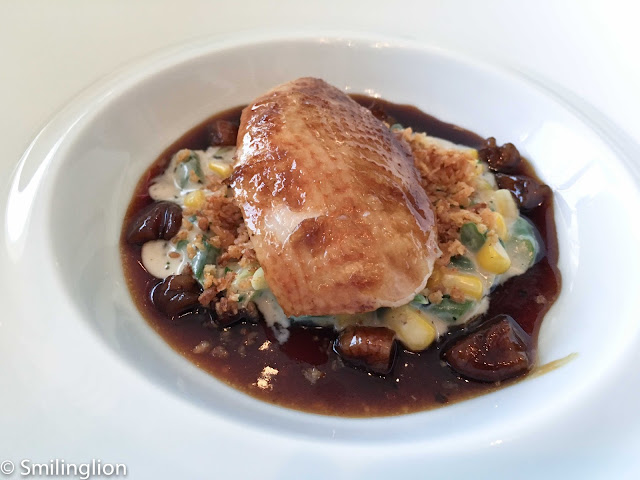 The Snake River Farms "Calotte de Boeuf" was a rough cut of beef which was so full of flavour and jus that the accompanying Persian cucumbers, Castelfranco radicchio and smoked turnip cream seemed to be added to restrain it. This was brilliant, and together with the quail dish, was able to bring out the best in our Napa Cabernet Sauvignon. 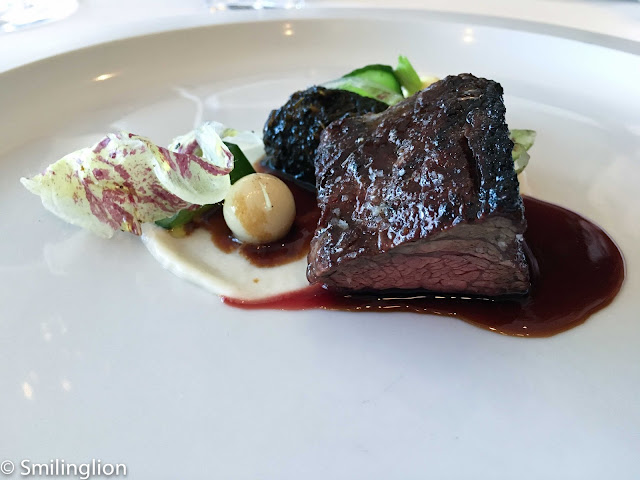 From memory, neither Per Se nor French Laundry do the traditional cheese course whereby we get to choose what cheese we get. Instead, 'cheese course' here means a curated course of one type of cheese (usually cheese from a neighbouring area). And so it was here as well. This was a Goat Lady Dairy's "Providence" with Romano bean "Rémoulade", summer squash, celery branch and English walnut tapenade. 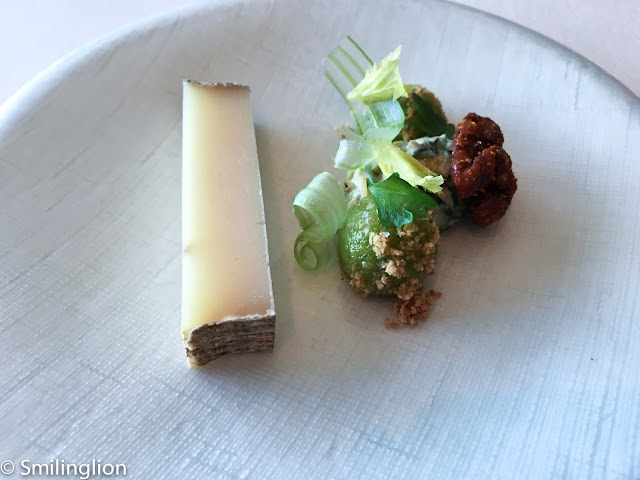 Desserts this time seemed a bit more casual than before. Instead of course after course of elaborate creations, this time, all three desserts were served in small plates at the same time. Not that we minded, the first was a madeline with blueberries and pear, the second was a peanut butter ice-cream sandwich and lastly a raspberry-glazed hazelnut praline. They were all very good. 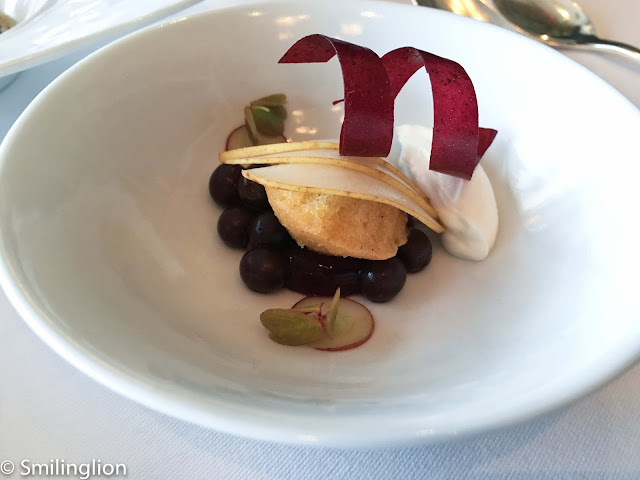 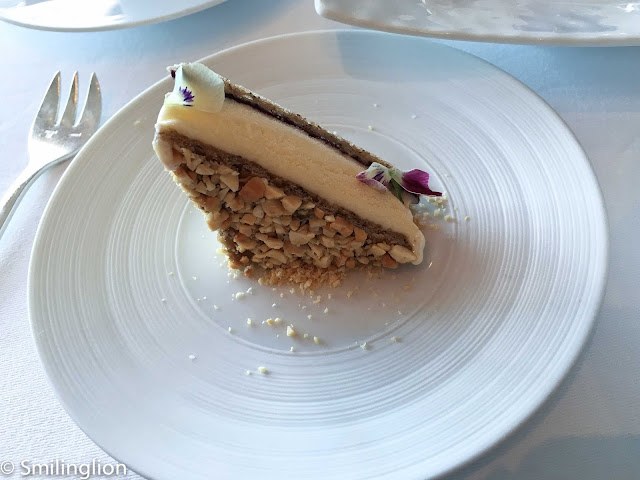 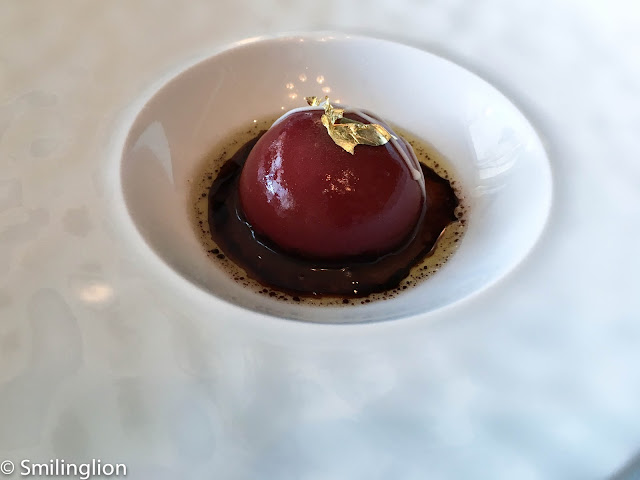 Coffee was accompanied with the old favourite of "Coffee and Doughnuts", and a choice of chocolates and pralines from an impressive selection. This was the end of a hugely enjoyable meal. True, the food was not as cutting-edge as Atera, neither did it push the boundaries like EMP, but Per Se did familiar flavours with such finesse that we would describe the meal as flawless. But it wasn't just the food. The service levels throughout our time there were at peak levels; the service staff weren't just precise and professional, they were warm and friendly as well. A few of them were able to engage us in interesting conversation which spoke of their genuine desire to provide their guests with a comfortable and involved dining experience.

When we left New York in 2012, our most memorable meal during that trip was at Per Se. As we leave New York again this time, Per Se is once again the most outstanding meal this time. If this wonderful experience is the direct result of the January NYT article, then we owe Pete Wells a nice meal. 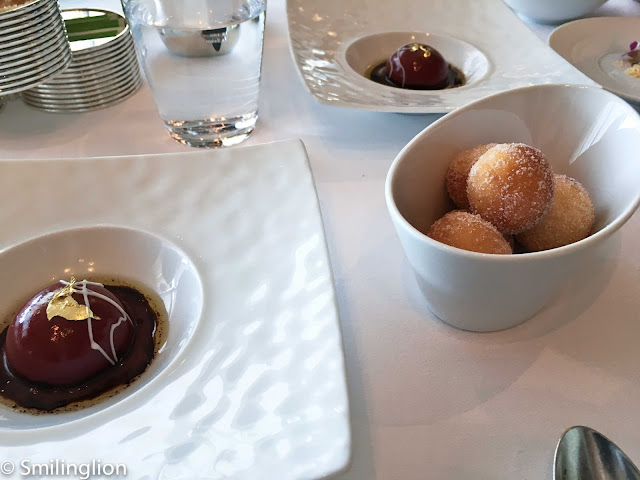 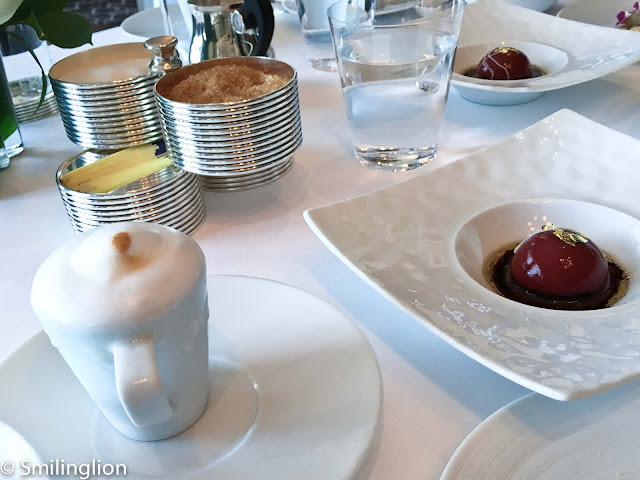 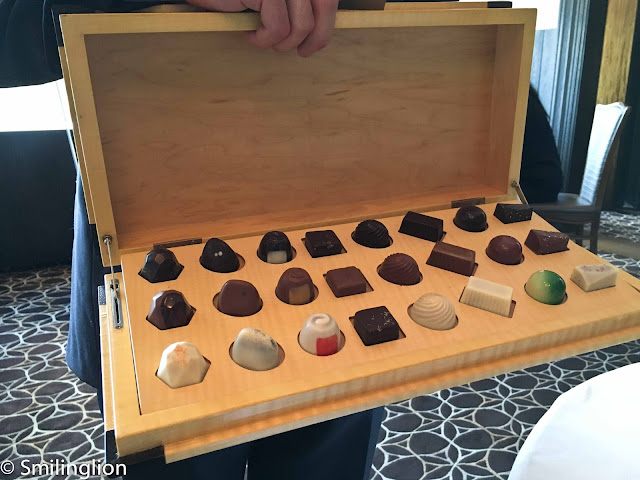