Atera is a niche restaurant in Tribeca which focuses on creative modern european cuisine. It is located in the Tribeca neighbourhood of Manhattan and takes up a small first-floor space in a shophouse which also accommodates a vet and dog daycare centre. A holder of two Michelin stars, it survived a change in chef when the previous maestro Matthew Lighter left last year to pursue other opportunities. New chef, Ronny Emborg, a Danish national who cut his teeth in El Bulli, Mugaritz (where he actually worked in the same kitchen as Matthew Lighter) and AOC, took over during the middle of last year.

The 15-seater counter-only restaurant can be a daunting stage for any new chef, especially one as young (he is in his early thirties) and foreign as Chef Ronny. This is particularly because all the cooking and plating is done in that small open kitchen (unlike many other restaurants with similar counter dining concepts but with a separate or separated 'wet' kitchen area for heavier cooking). With a single tasting menu only, Chef Ronny and his three chefs and one sommelier work in that confined space to serve up dinners which stretch to almost twenty courses, decant and serve the wines and prepare the tea and coffee under the scrutiny of the guests. 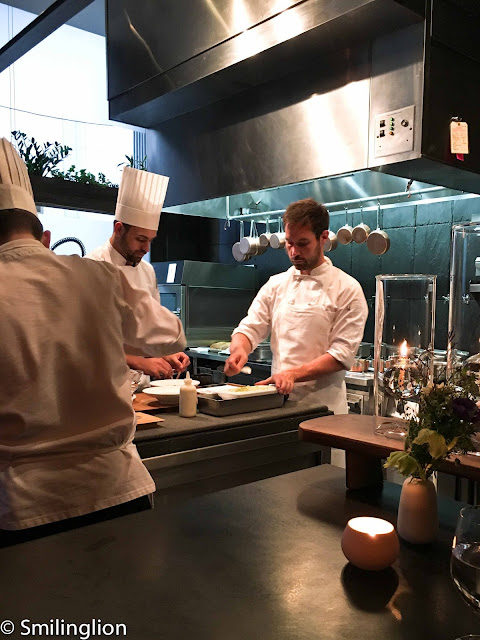 Despite the all-counter seating, we were very comfortable in our high-chairs throughout dinner. The atmosphere was quite relaxed, with a well-curated contemporary soundtrack of music which was played at just the right volume to create the ambience of a discreet lounge. But in contrast, there was an intensity in the kitchen staff which demonstrated their extreme focus in preparing and serving the food in a military precision to ensure that all the dishes came out exact. It was like watching a surgical team performing an open heart surgery. But this intensity was not without style. Chef Ronny and his team exuded a swagger of a group of professionals who excel at their tasks and know it, against the backdrop of cool music. It didn't hurt that the entire team was, without exception, good looking and über cool (especially the ridiculously cool maitre d with the ponytail).

All these would be sheer vanity if the food wasn't any good. But the food was good, by Odin was it good. For the next two hours, we were treated to a meal of the highest quality and imagination. Chef Ronny's manipulation of flavours, textures and even temperatures was masterful, and every course was finished off by us with relish overtaken only by our anticipation for the next dish. And the service was slick, with interesting touches of originality like using a shaving brush to sweep breadcrumbs off our tabletop (clearly they don't need it for anything else given that a beard is a requirement for employment in this restaurant if you are a man).

Dinner commenced with a shot of juniper and lime essence. This was followed by the next four courses of Waffle - mushroom, summer truffle, Foie gras - corn, lemon verbena, Olives Grapes (which was actually black grapes which looked like olives but were covered with olive oil) and Golden Osetra caviar - pistachio, beer. They were superb but the caviar stood out for the brilliant pairing of of the luxurious roe with pistachio ice cream. 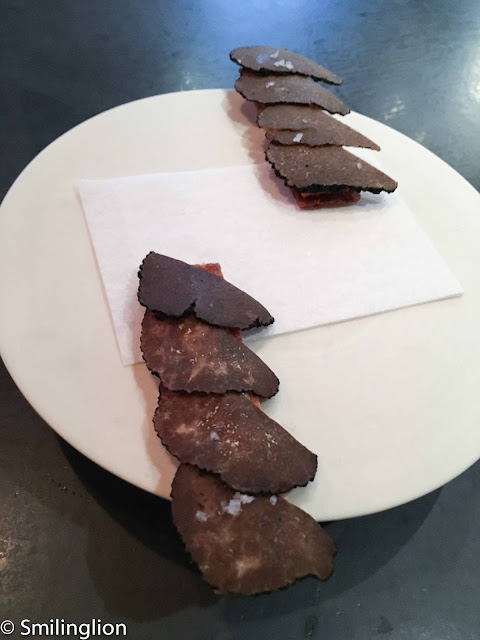 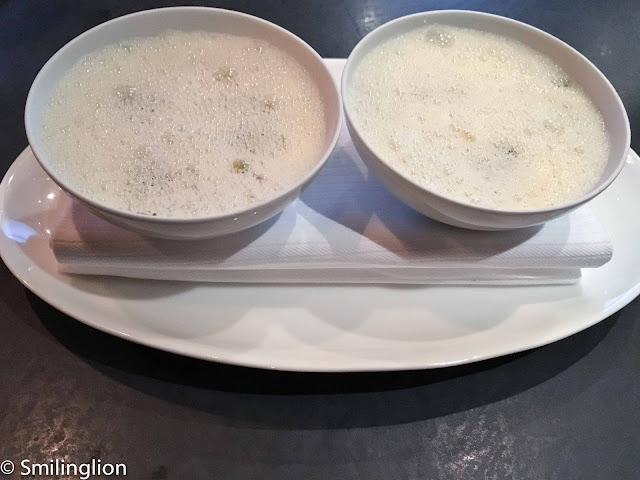 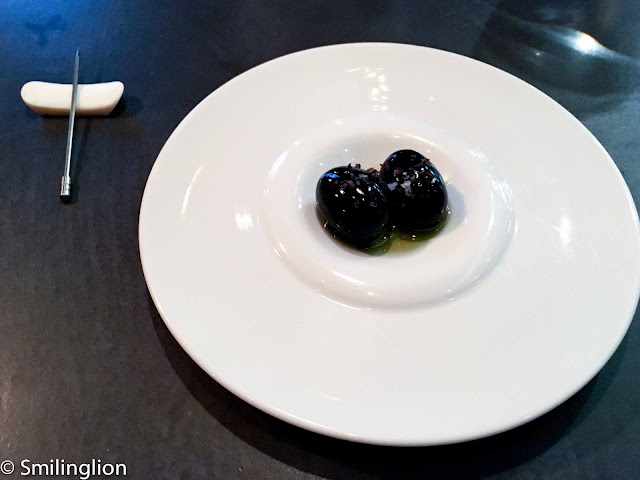 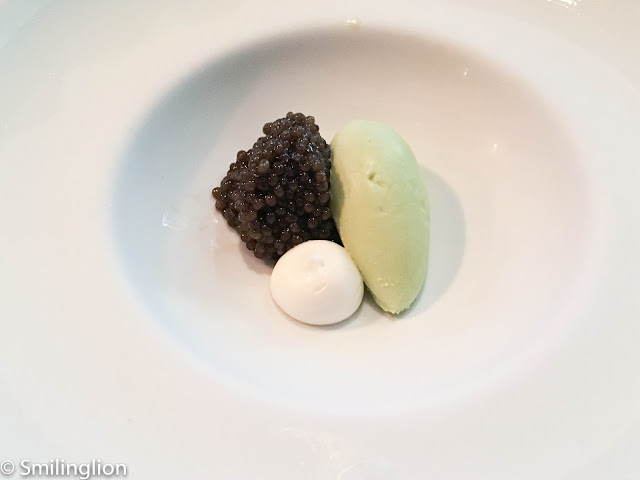 Despite the availability of various type of beverage pairings, including wine pairings, a temperance pairing (i.e. non-alcoholic pairing of juices) and even a tea pairing, we went old fashioned and ordered a Burgundy in the form of a 2012 Vosne Romanee 1er Cru Les Suchot from Mongeard-Mugneret, which we have had before and worked like a treat again for this meal. 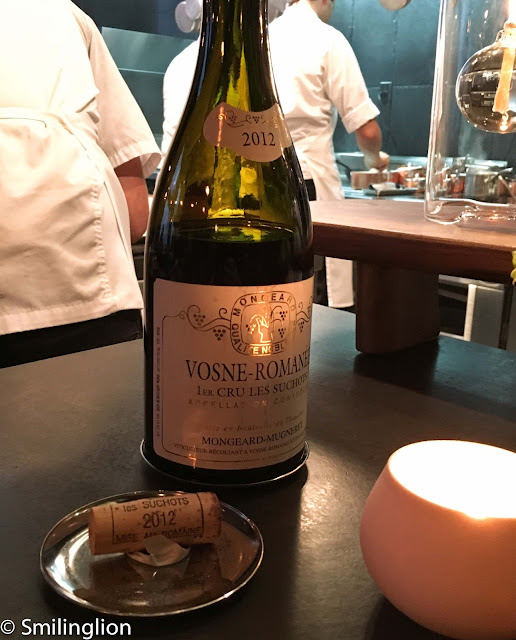 The Mackerel - cucumber, horseradish was a dish full of umami, with the warm dashi, cucumber sorbet and horseradish powder a demonstration of the successful pairing of flavours, textures and temperatures. 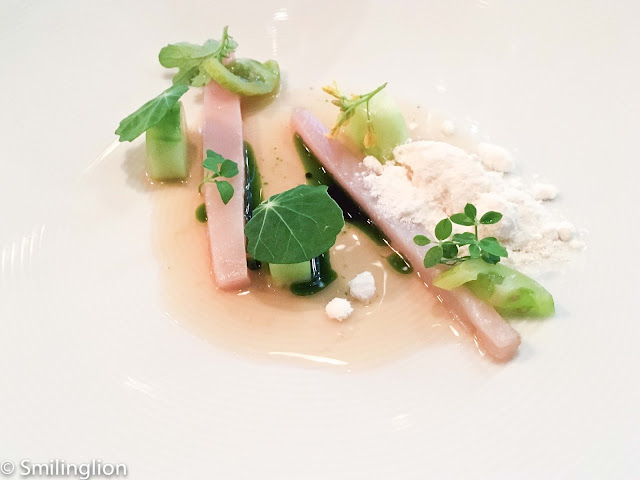 The Oyster - Kohlrabi, thyme and Lobster - celeriac, yuzu continued the theme of light seafood dishes with splashes of brine and distinctive sauces balanced out by the use of fruit (green tomato in the case of the oyster and yuzu for the lobster). 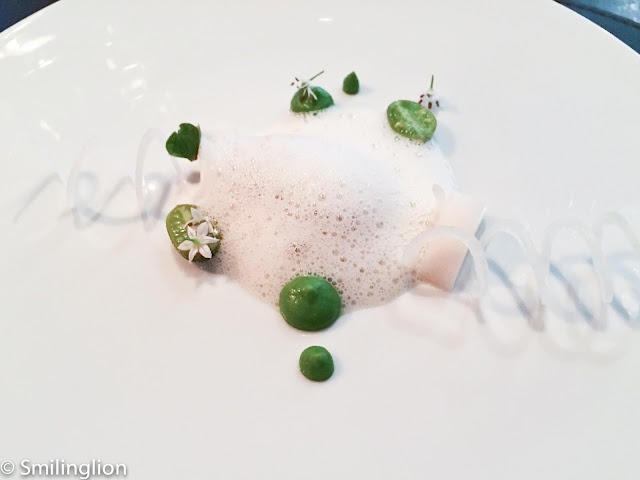 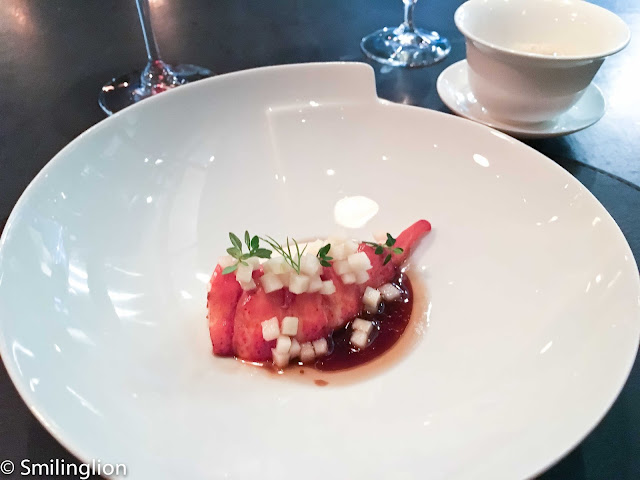 The accompanying bread was sourdough and unsalted butter with cheese flakes and a cream which had a curd-like texture. 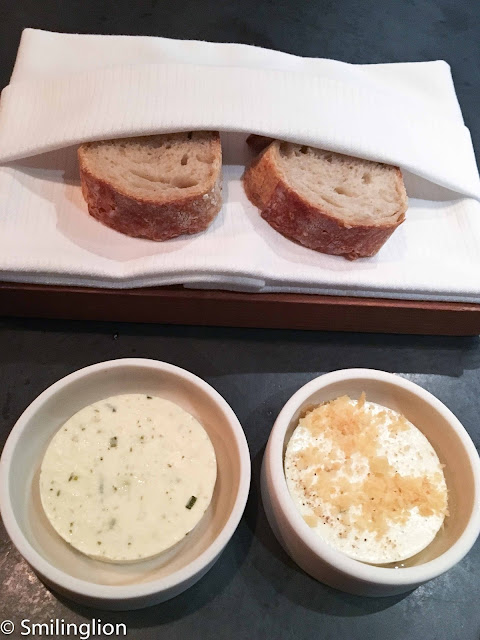 The meal reached its crescendo for the main courses. The Summer vegetables - yolk, cheddar was a  single quail egg yolk on a plate of vegetables. The chef poured a light cheddar cheese sauce onto it, making it resemble a fried egg. This was simply divine. 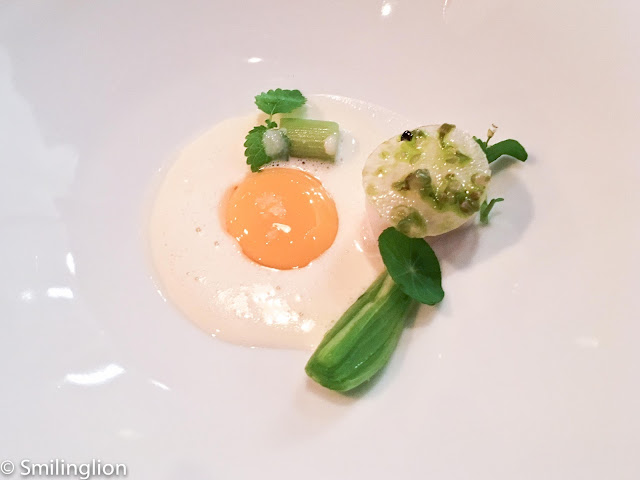 The Squab - green bean, blackcurrant was probably one of the best game dishes we have ever eaten. The use of the blackcurrant jelly sheet to take the edge off the gamey flavour of the bird breast was quite genius. 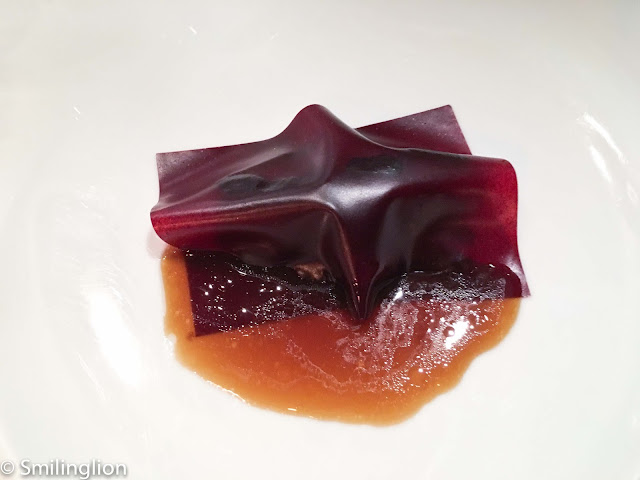 And finally, the Beef - zucchini, Allium which was perfection in itself. 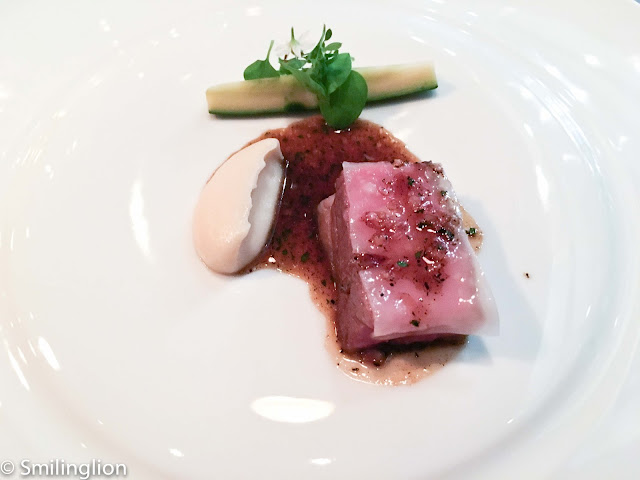 The desserts were no disappointments either. The Toasted hay - raspberry and Blueberry - lemon, elderflower were my favourite type of light fruit-based desserts. 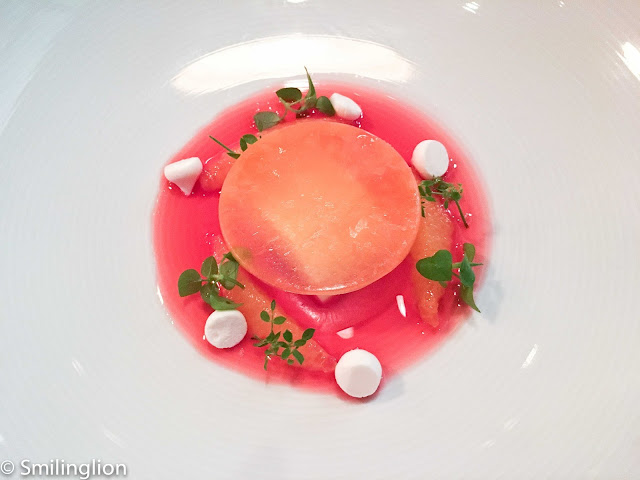 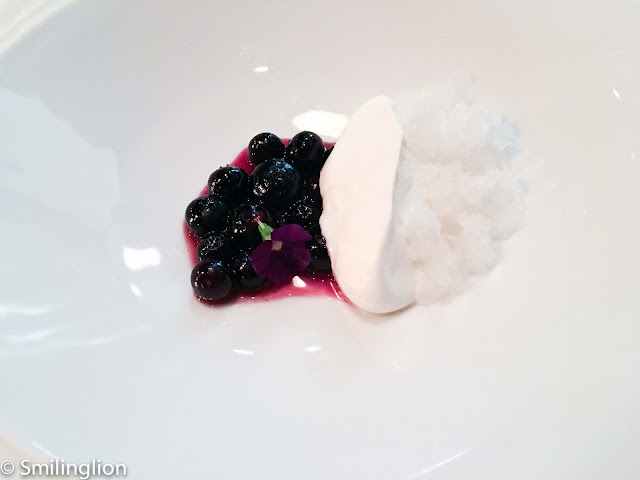 Even after the main dishes, the meal did not let up. The Peach flower and Miso caramel, Flødeboller (a Danish chocolate-covered marshmallow) and Strawberry tart showed a lot of effort and creativity by the kitchen. To top it off, a post-dinner order of tea and coffee then resulted in an elaborate tea and coffee-making ritual by the sommelier in front of us, with a level of choreography which would put a traditional Japanese green tea ceremony to shame.

The quality of our meal and the dining experience that night was of the highest order. The attention to detail in each of the courses was very impressive, and given our physical closeness to the chefs in the kitchen and our ability to scrutinise every dish they were preparing, it was as if we were passive participants in a two-hour long performance art piece. I would compare it to being in a small audience sitting around a string quartet on stage watching them perform a technically difficult piece of music for the length of time, where the audience are close enough to look over the shoulders to read the music scores while the players are performing. It is no wonder that the chefs, despite their efforts to be friendly with their guests, looked like they bore a lot of stress in executing their cuisine to perfection and trying to look cool at the same time.

We were impressed at Eleven Madison Park at dinner the previous night but this meal at Atera eclipsed that with its unique dining experience and originality. 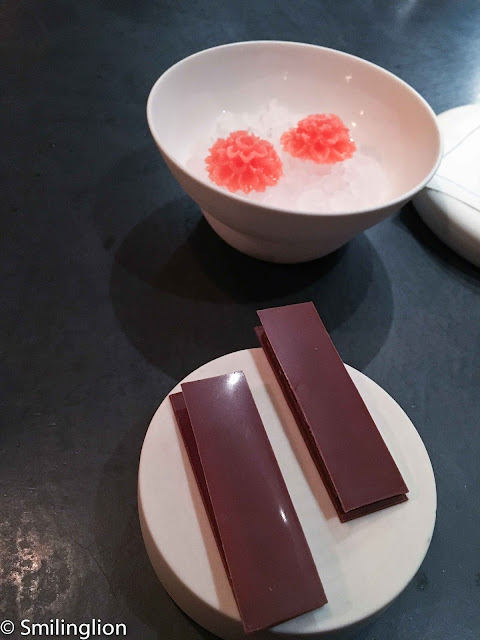 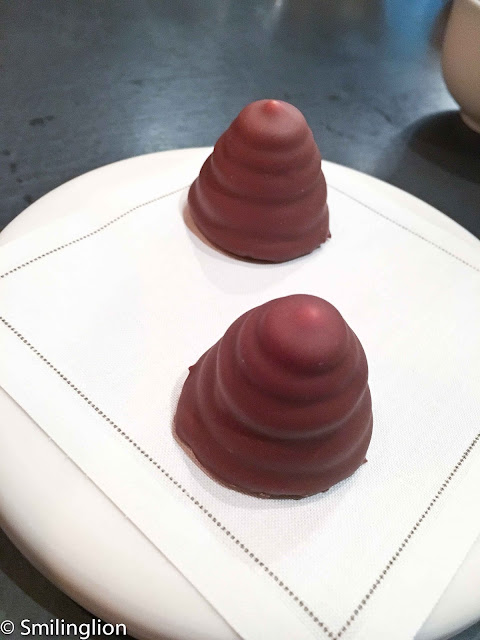 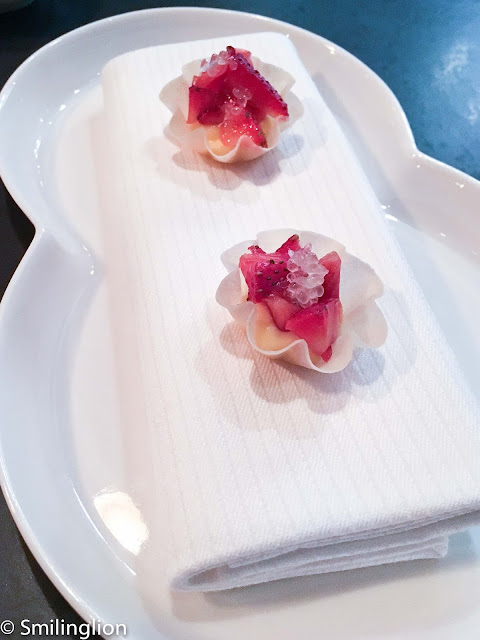 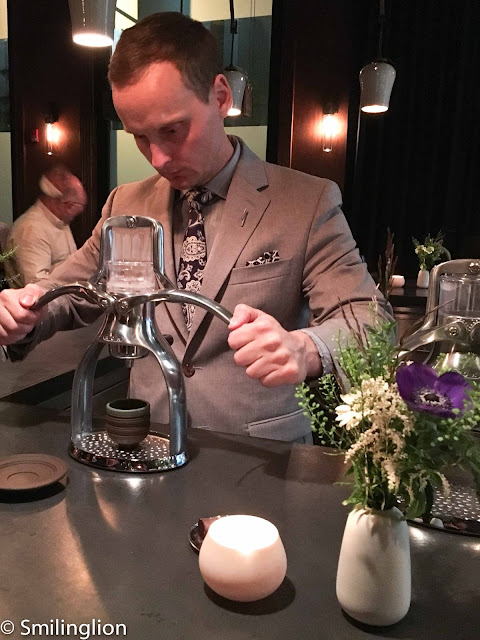