Update: In July, Odette was awarded 2 Michelin stars in the inaugural Michelin Guide for Singapore.

When Julien Royer left Jaan, there was discernible disappointment amongst the local fine dining crowd for the loss of one of Singapore's most promising young chefs. Having taken over the kitchen at Jaan after the high profile departure of Andre Chiang (who went on to set up his own restaurant, Andre, now regarded as the finest European restaurant in South East Asia) about half a decade ago, he very quickly created a cult following of his own, first by maintaining Andre Chiang's very high standards then infusing his own personality on the cuisine to make it his own. One apparent difference between the two master chefs is that Andre Chiang's cuisine tends to be more Asian-influenced whereas Julien Royer's food, though similarly modern and innovative, is stronger in the French tradition.

So when it was announced shortly after that Julien Royer was setting up his own restaurant, Odette, there was a buzz of anticipation, which resulted in his restaurant being the hardest to get reservations when it first opened (around 3-4 months in advance). 9 months on, the waiting list for reservations is no longer that long, though 1-2 months advance bookings may still be required. We held back visiting Odette till earlier this month because we were hoping that the customary new restaurant teething issues would be ironed out, and since then we have dined here three times. 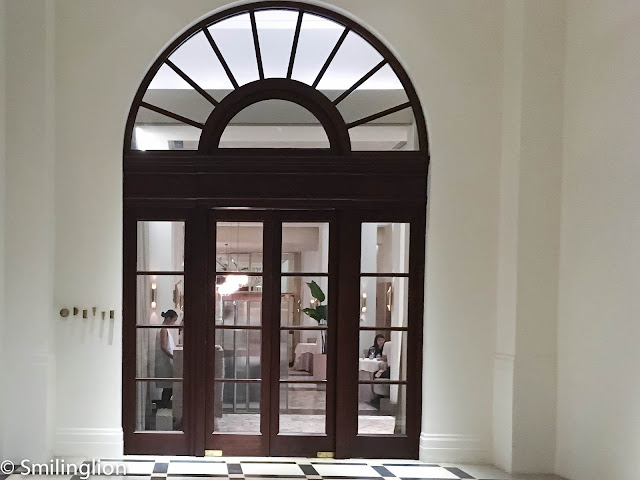 Odette opened at the new iconic National Gallery, which is the refurbished former Supreme Court premises. Its location generated even more hype for its opening given that it coincided with the launch of the much lauded and highly anticipated National Gallery in the 50th year anniversary of Singapore's independence. Inside, a modern white minimalist interior with warm lighting adds to a very cozy and intimate dining environment. 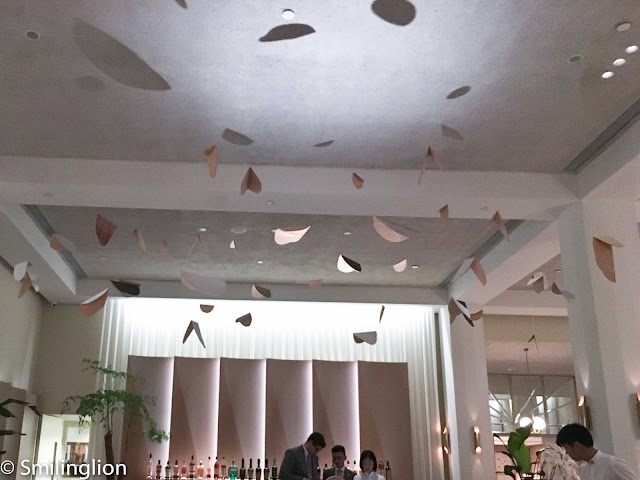 There were only tasting menu options: the 6 and 8 courses and their vegetarian equivalent. The 8 course was what we went with, and our tipple that night was a glass each of blanc de blanc champagne and a bottle of Rhone Cote-Rotie.

We enjoyed the plate of snacks: basil cracker, seaweed pillow, comte puff and cumin tart, which were not at all pointless. The next amuse bouche of mushroom soup was full of rich earthy flavours and would not be out of place in the formal menu itself. 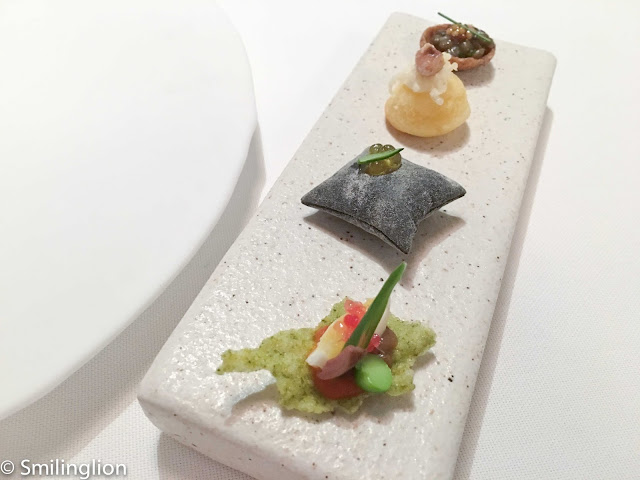 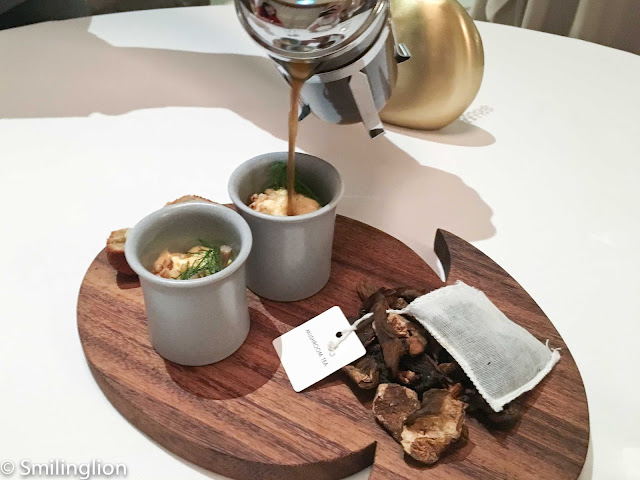 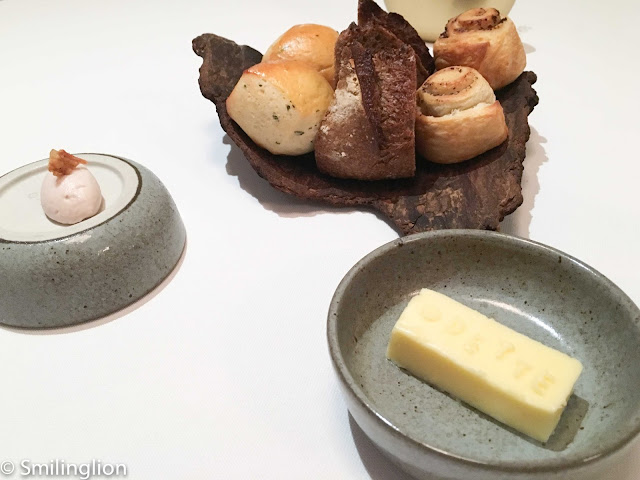 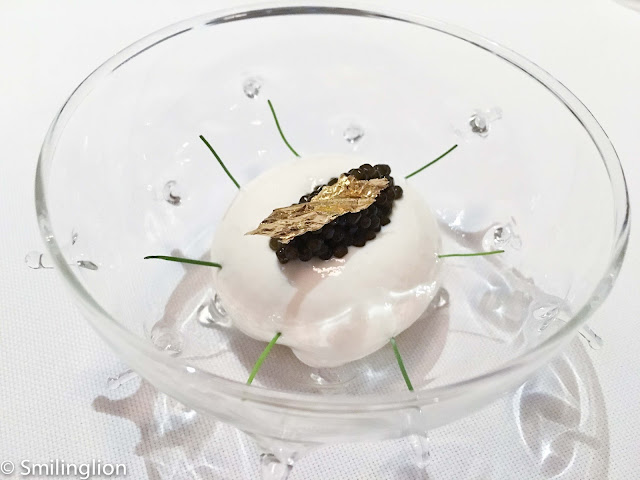 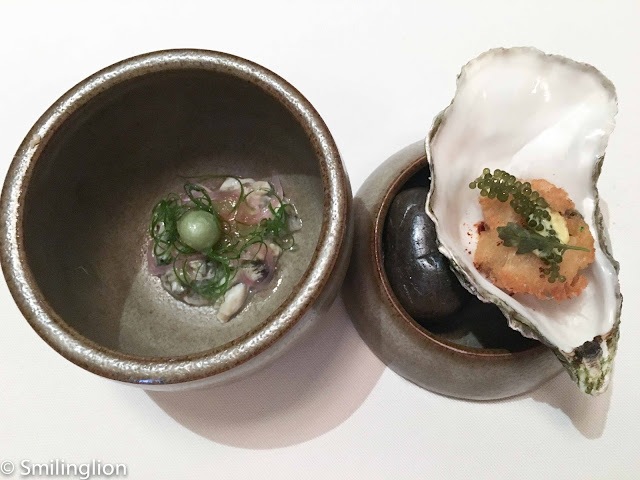 The Heirloom beetroot variation (salt-baked beetroot, stracciatella 'Artigiana', honeycomb) showed the Julien Royer's skill in creating a dish based on beetroot being the leading ingredient. 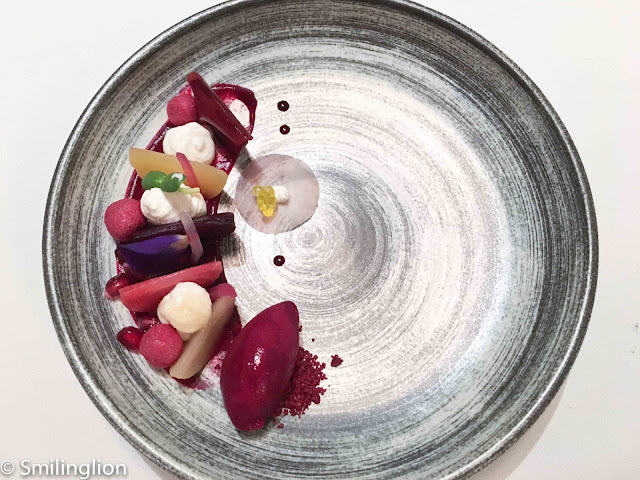 The Rosemary smoked organic egg (smoked potato, chorizo, buckwheat) was an old favourite and is one of Julien Royer's signature dishes, dating back to his Jaan days. The richness of the mushroom-based froth with smooth creamy potato with the crispy buckwheat and Spanish sausage was well complemented by the half-boiled egg and its bright-orange organic egg yolk. 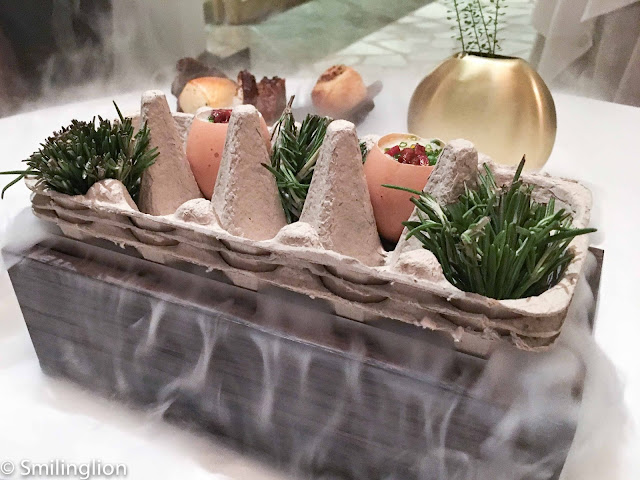 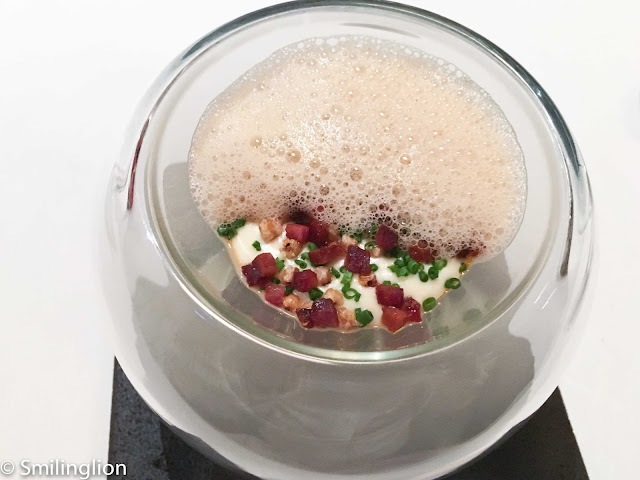 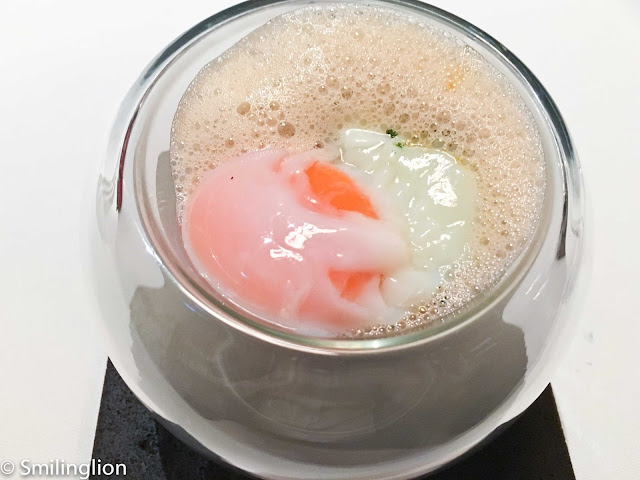 The Seared foie gras (miso caramel, lemon quinoa, gariguette strawberry) surprised us because it looked like a typical foie gras dish but was in fact very unique. The tartness of the strawberry and lemon was an refreshing change from the usual sweet counterbalance to the liver. This was very good and unexpected. 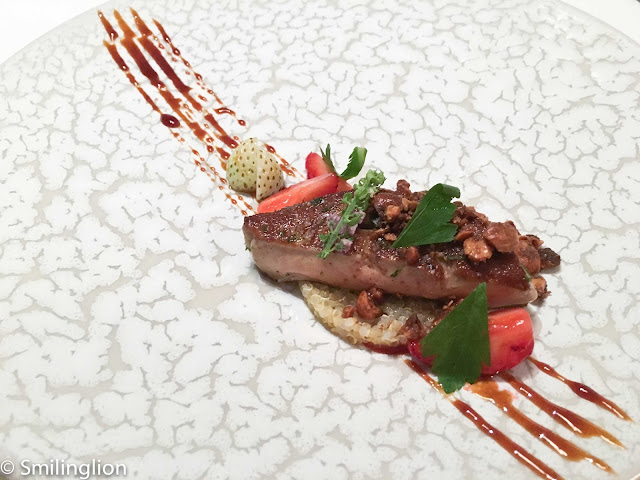 The Crispy skinned kinmedai (charred Fremantle octopus, confit fennel, bouillabaisse) was also excellent and notable because of the restraint in the flavours of the seafood stew sauce, hence avoiding overpowering the perfectly cooked fish. 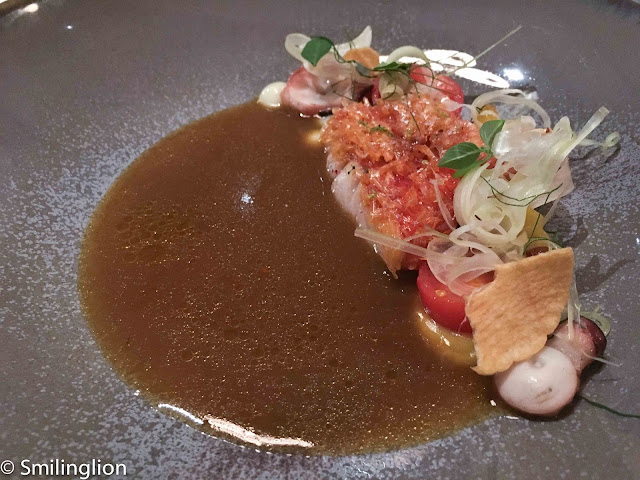 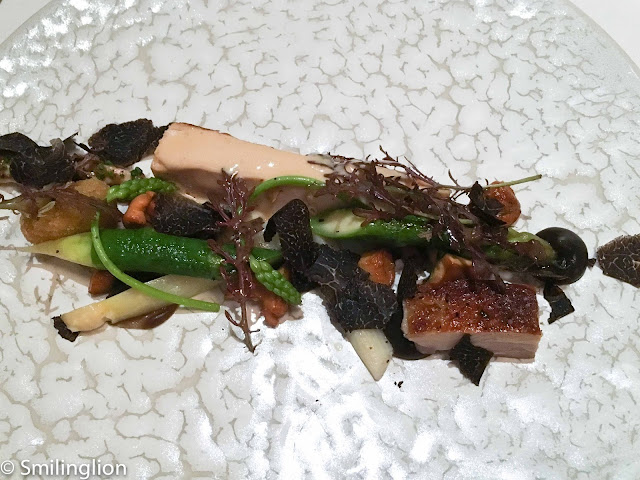 The 'BBQ' pigeon Fabien Deneour (petit pois, roasted porcini, pickled cherry) was also of a very high standard. It was cooked perfectly, retaining its juices without undercooking it. This, together with the chicken main course, demonstrated the Julian Royer's classical French culinary roots. 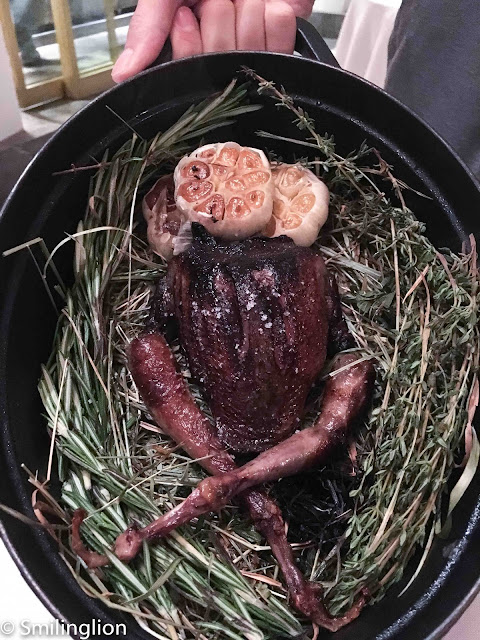 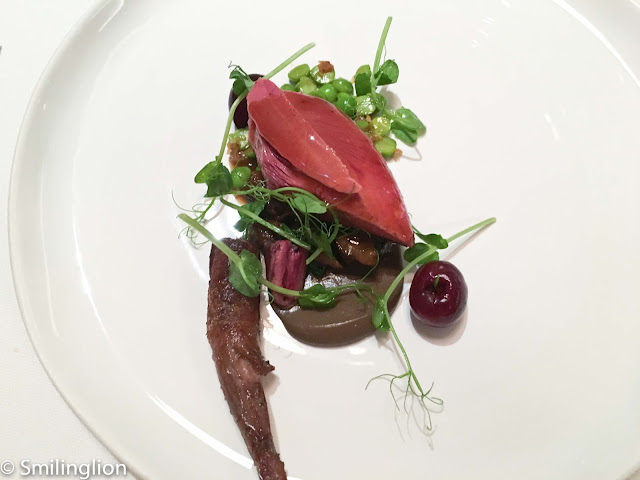 The obligatory cheese course including the usual suspects; the 24 month aged Comte, Munster and Roquefort (though they lacked and Epoisses this time). 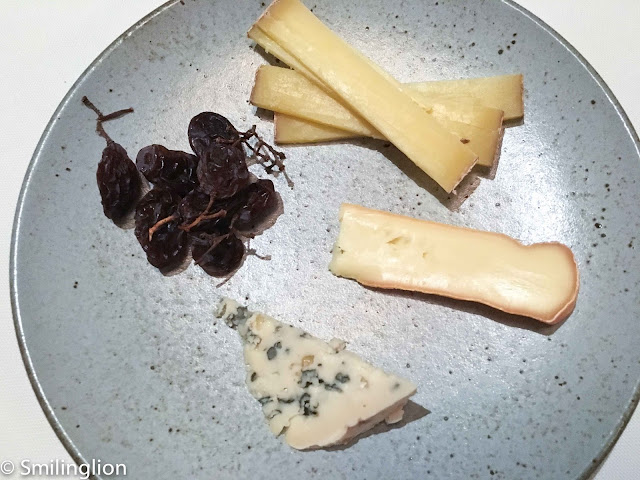 The pre-dessert and dessert of Lime foam and cucumber sorbet and Lemon Tart (organic lemon curd, sable breton, basil) were feather-light and very refreshing. The version of the lemon tart in particular was a very impressive effort. 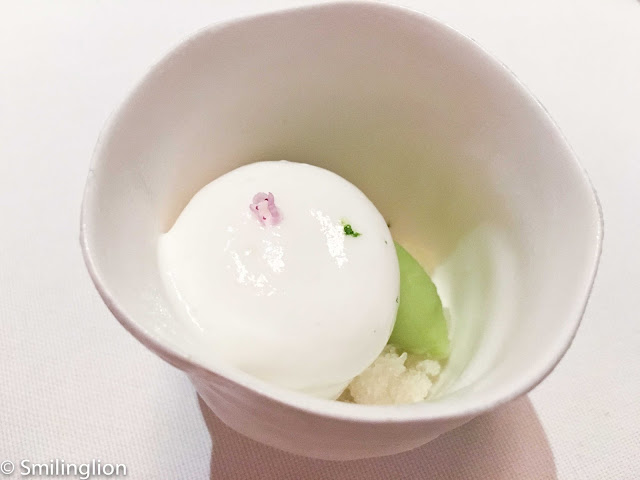 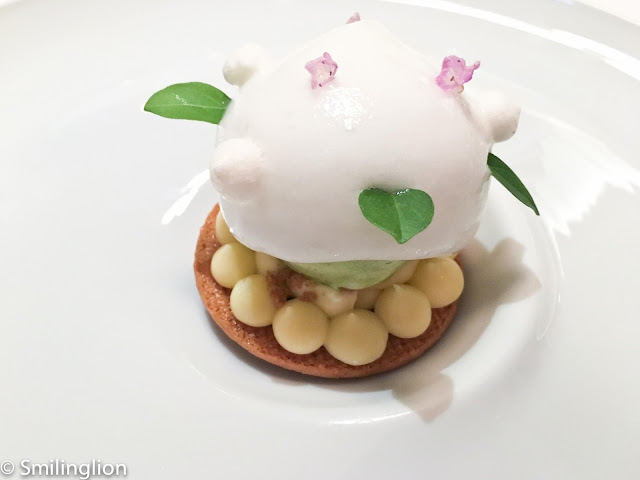 In all this was a superb meal. The food was flawless throughout and the strong classic French influence was apparent despite its tendency to the modern style. The wine list is decent and has the right selection of wines and vintages for a new restaurant. However, there is room for improvement. Service, though ernest and diligent, felt slightly green and inexperienced, but that should hopefully get better over time once the staff matures as the restaurant does as well. 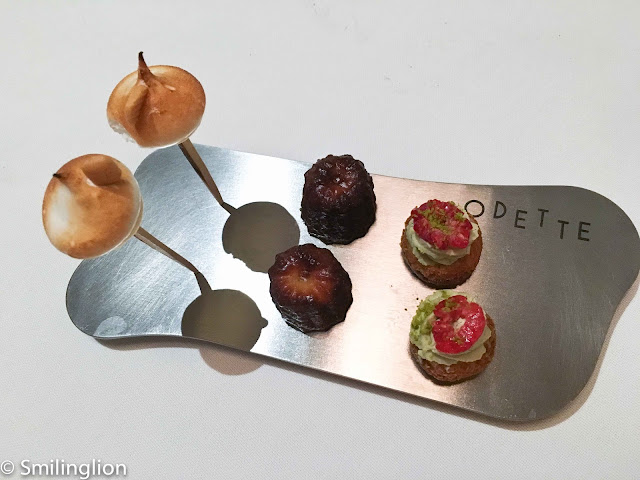