At the time of writing this, Andre already received its two Michelin stars in the inaugural Singapore Michelin Guide, though we dined there two weeks prior to the awards announcement. We had the privilege of hosting our overseas friends who had heard so much of this restaurant, so there was understandably very high expectations from all of us. The first Michelin Guide for Singapore was generating quite a bit of anticipation, hence it was one of the main conversation topics at the dinner. It was our view that it would get at least two stars, if not the only one to get three. We were not totally wrong in the end, although we had forgotten about Joel Robuchon (a flawless restaurant we have to admit, though lacking in soul and originality in our opinion).

We've followed Andre's progress closely, from the time when it first opened several years ago, and have seen his season menu progress and mature (see earlier post: Andre June 13). We even stopped writing about our meals here, until now when renewed interest due to the advent of the Michelin Guide obliges us to take stock and document again our experiences here. 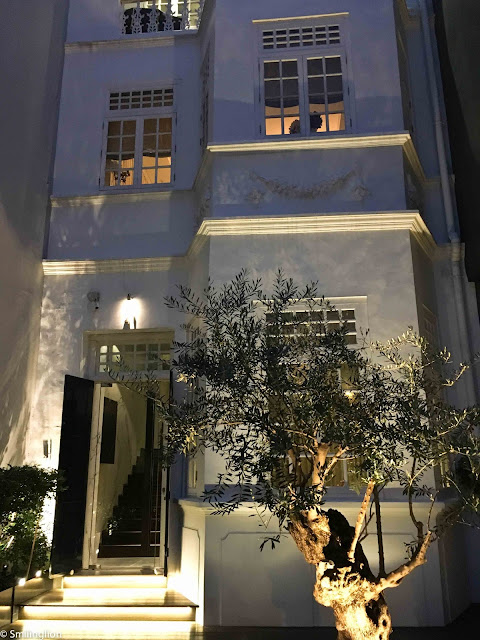 It is a testament to Andre Chiang's burgeoning reputation and self-confidence that he continue to be a trailblazer for the culinary arts in Singapore. Relying exclusively on a menu consisting solely of an eight-word 'Octaphilosophy', there never is a description of the dishes he is only going to serve at each meal, putting his diners solely at the discretion of his inspiration for the day. Of course most of his dishes reflect the general theme and his specific creations for the season, but tweaks are made depending on the availability of ingredients. 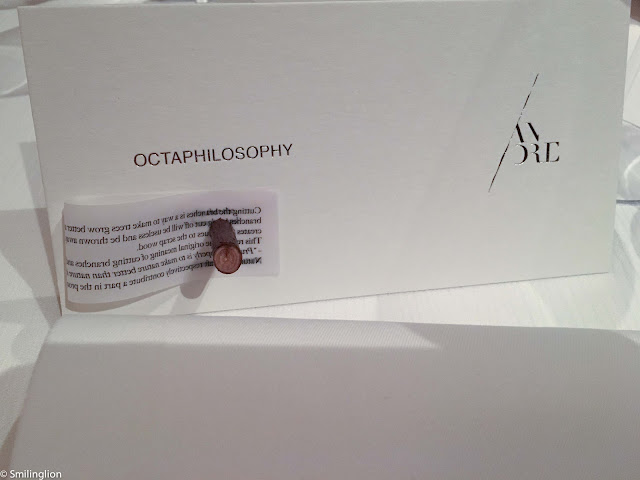 His amuse bouche consisted of a eclectic selection of snacks, including the roasted cumin mushroom mini-tarts, celeriac with a line of miso on a cracker, variety of crisps and the abalone and crispy deep fried prawn heads. They were all very addictive. By this point we had made a curious observation. From the point of time when we sat down till the time we finished our snacks, we were not once asked by the sommelier if we wanted any champagne or wine. This we thought was unusual in our experience. Initially we put it down to tardy service but after observing the other tables, we realised that this was deliberately the case. 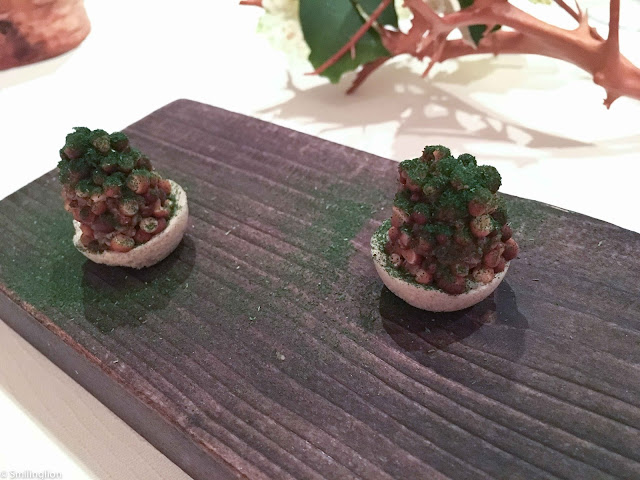 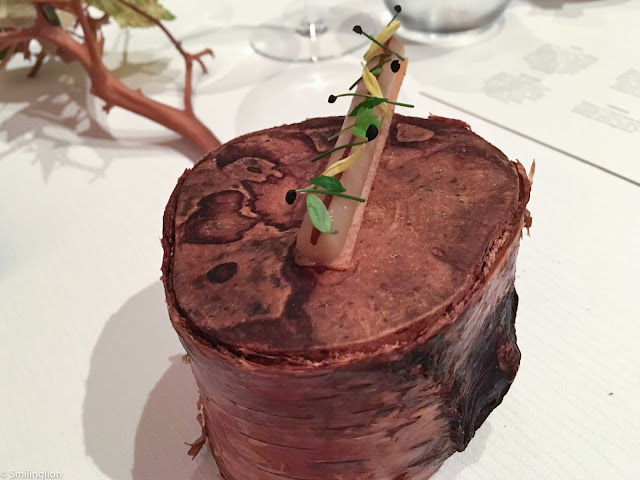 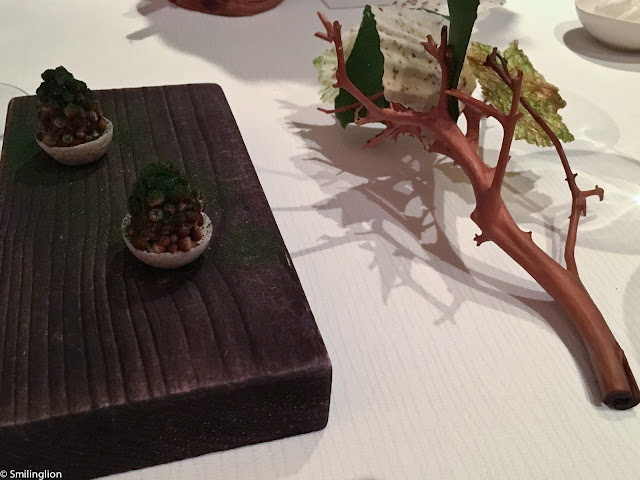 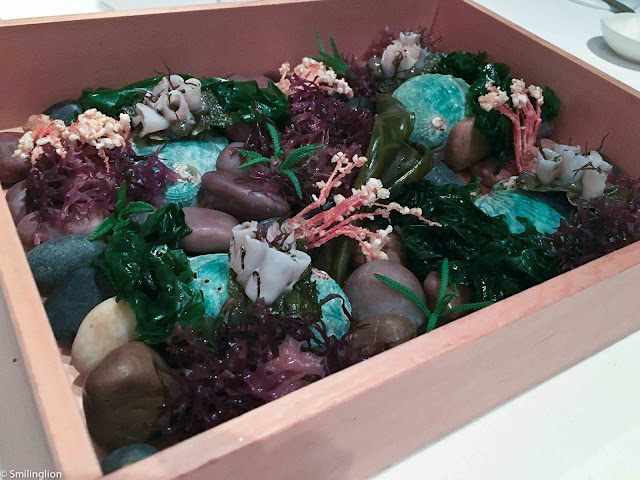 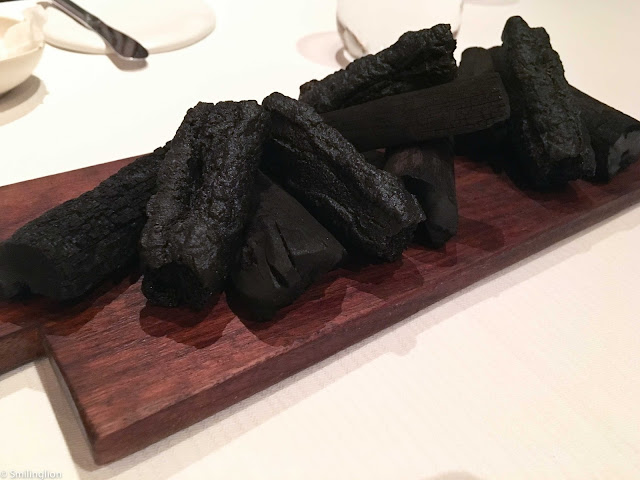 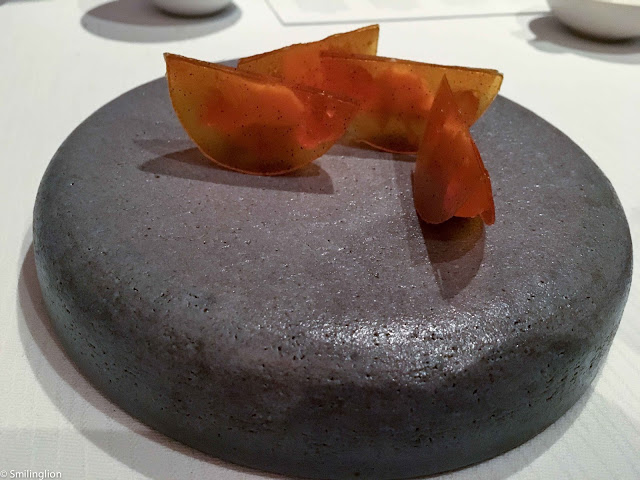 Only after the amuse bouche was done with that we were offered the alcoholic drinks. We opted for the wines by the glasses (there was also an interesting tea pairing for those wanting to stay sober). If we were to have any beef with this restaurant, it is their insistence of carrying only biodynamic or organic wines from small unknown French producers. No fancy or known labels in their wine list. And these so-called healthy and eco-friendly wines were not cheap, pricing themselves at levels comparable with the top French wines without in our opinion being as good. This is another example of Chef Andre's self-confidence that he can continue with this as a matter of his principle.

The first course was a bowl of sweetcorn and almond in horseradish cream. This was mind-blowing. The combination of flavours was unusual yet totally original. It totally overshadowed the next dish, which was the white asparagus and sea urchin with an egg white sauce. The asparagus was, to be fair, a very elegant dish nonetheless. This was followed by the squid linguine with rice crispies and seaweed. This was a well-balanced and memorable dish. 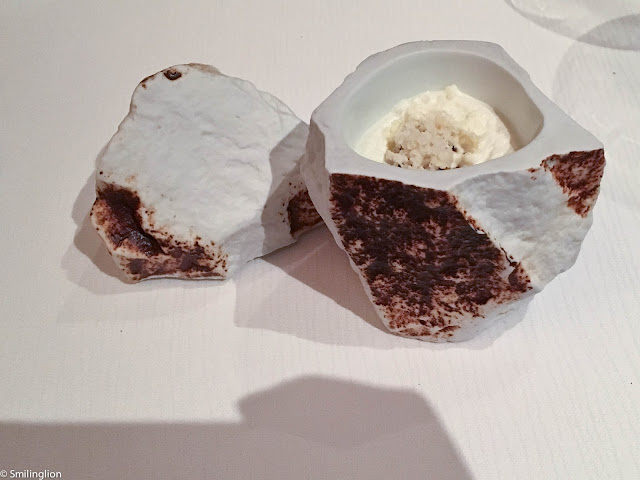 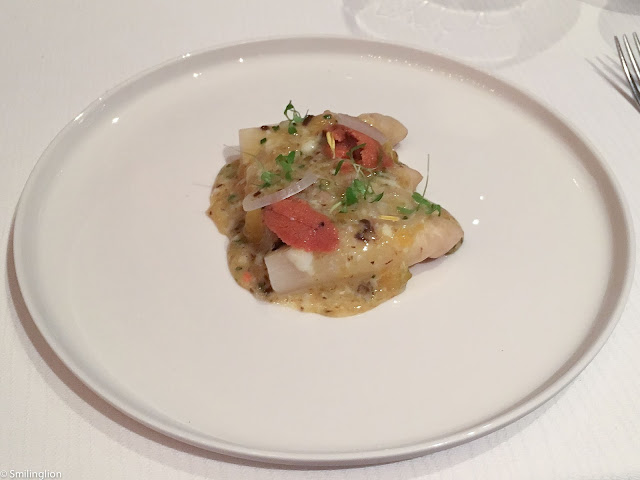 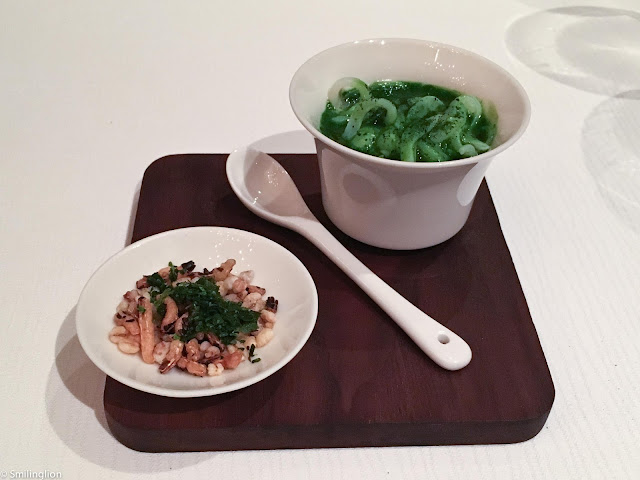 The other dish to blow our minds that night was the seared oyster with scallop skin and watercress foam. This was another very original dish and introduced us to flavour pairings which were new to us. Then the next dish was the horse mackerel in a mushroom and seafood soup which was a restrained demonstration of the umami flavours, followed by a black truffle linguine (we remembered it being good but our minds were still on the oyster dish that we forgot what this dish was about). 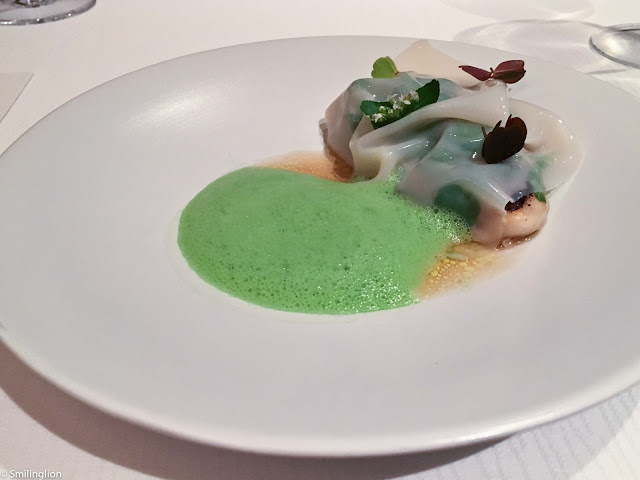 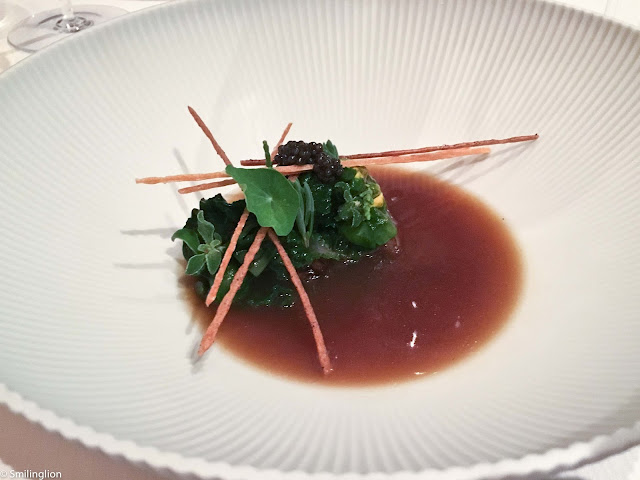 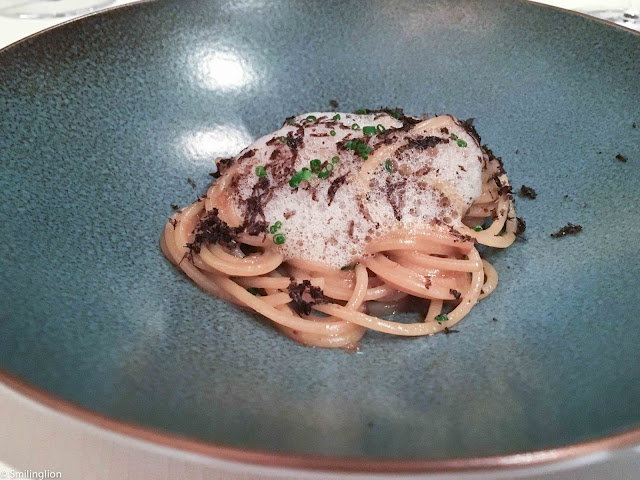 The foie gras custard with black truffle and chives reduction was an old favourite which dated back to the first menu. It was still enjoyable, but we felt that the rest of Andre's food has moved on and that this dish was like a drag on the menu. Maybe it's time to put this one to pasture. 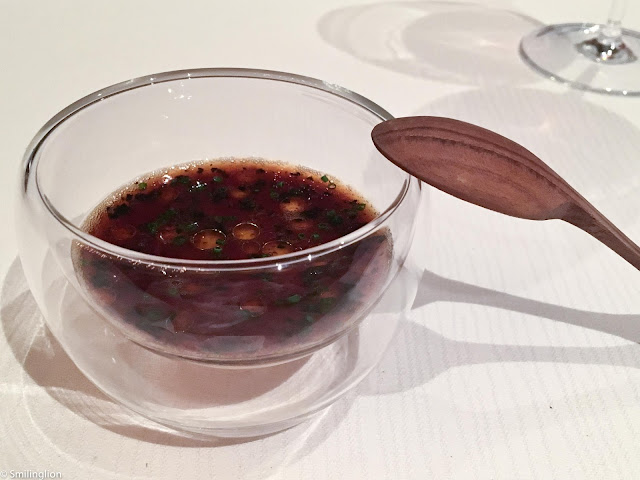 The final main course was the lamb shoulder roasted in coffee seeds with dehydrated onion. It was competent without being a standout dish. 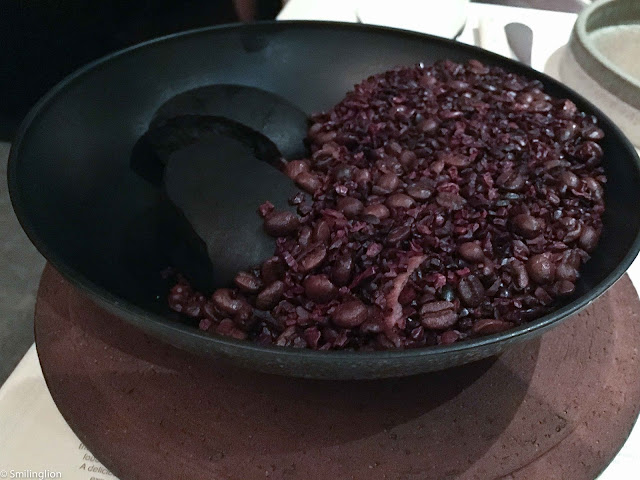 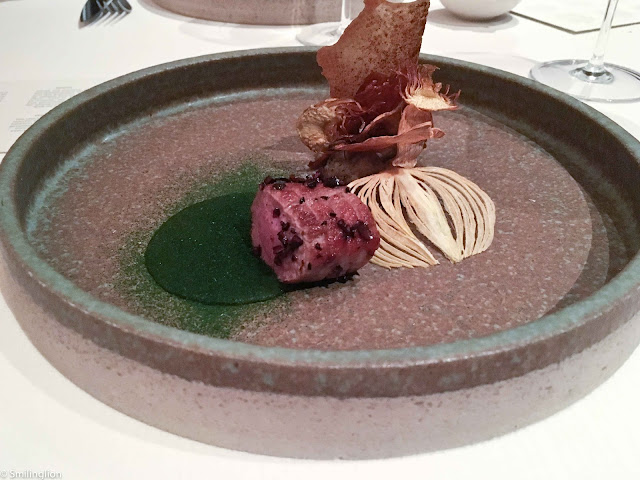 The desserts were what really immortalised this meal. The first being a simple yet incredible milk curd with a spoonful of chocolate and nuts. The fruity dessert was next, the refreshing carbonated grapes and peach parfait with a layer of iced raspberry which was quite sublime. And the final dessert, the deconstructed cake. This was a masterpiece (albeit it was a collection of 'unmixed cake ingredients' - the irony). Mixing up the ingredients gave a dessert which was formless yet perfect in its flavours. 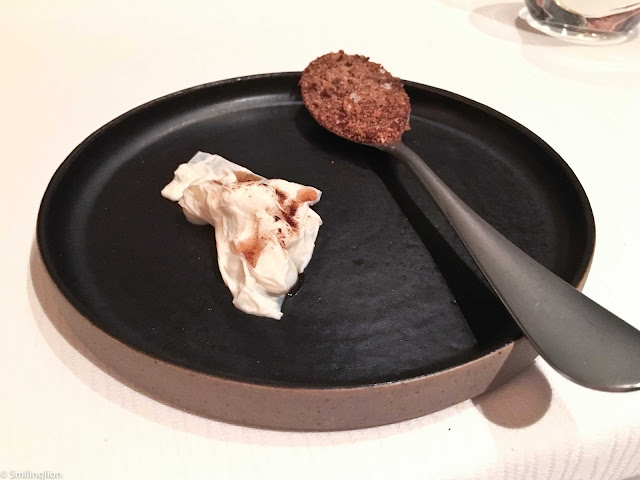 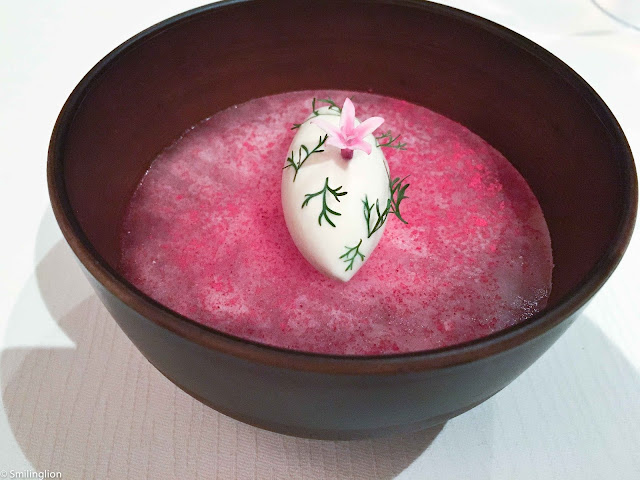 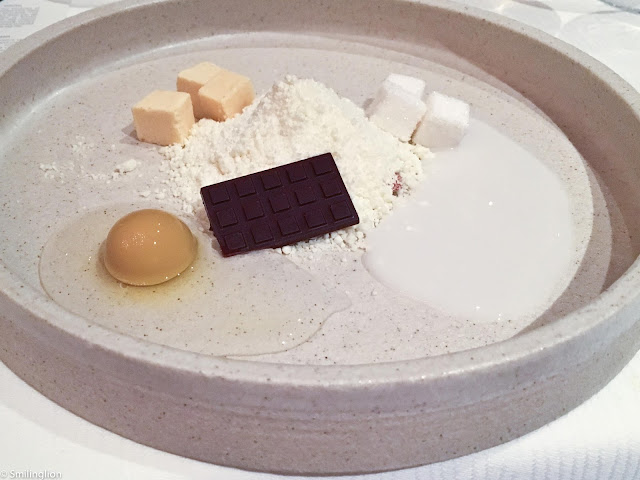 The meal ended off with a more than acceptable selection of petit fours. This will be a meal which will stay in our memories. It was a polished, innovative and daring dinner with Chef Andre introducing new ideas and flavours and being brave enough to step outside the comfort zone of most conventional diners. If anything, dining at Andre is comparable to listening to a Mahler symphony. It is intense and complex, with depth, textures and subtleties which may be lost on a casual audience. Not everyone will get it, but it is a true connoisseur's delight. 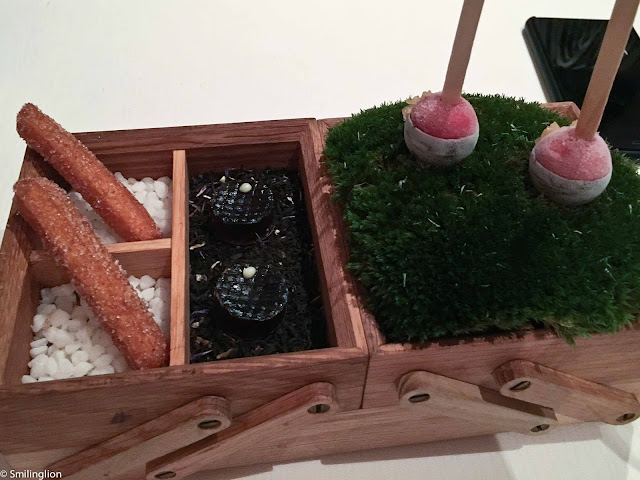 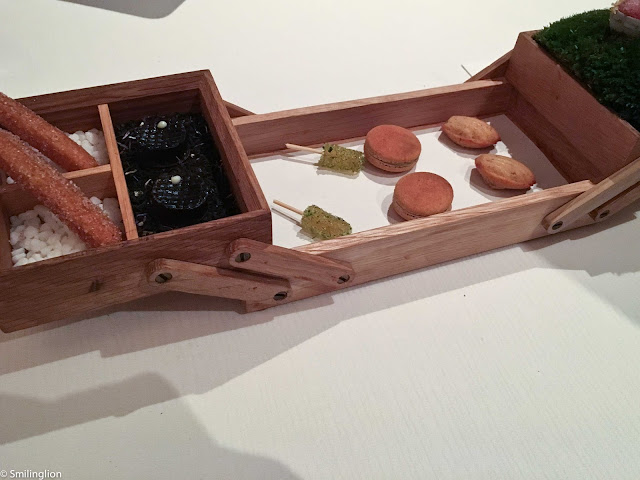