Never has a meal caused us so much confusion as it did at Combal Zero. This gastronomic temple of Davide Scarbin, which during the time when we were there carried two Michelin stars (it lost one star a few weeks after that), was in our bucket list from the time we started dining seriously in Europe, and this time round, we had to create an itinerary which took us to the Western side of Piedmont so as to eat here.

This meal was in almost equal measure sublime and ridiculous, with many moments remembered either fondly or for its infamy. It is for this reason that we have struggled to put our experiences of that evening down in writing for so long, because till today we still cannot agree on whether we had a terrific or a terrible meal that night.

We took a very long 2 hour drive through heavy traffic from Aosta to a small town south of Turin, to an old castle atop a hill overlooking the ancient city. The restaurant can be found in the castle, the Castillo di Rivoli, which was pitch dark that night save for a small lit pathway taking us to Combal Zero. The walk there from the road where we parked our car was surreal. Finding our way through a pitch dark ancient castle overlooking the flickering lights of the city below was an experience in beauty itself. The restaurant was a contrast in modernity: maple wood flooring, red brick walls and full glass windows added an air of cool sophistication. The restaurant was an elongated corridor with tables on each side of the central aisle overlooking either the inner courtyard of the castle or the city lights from the hilltop. 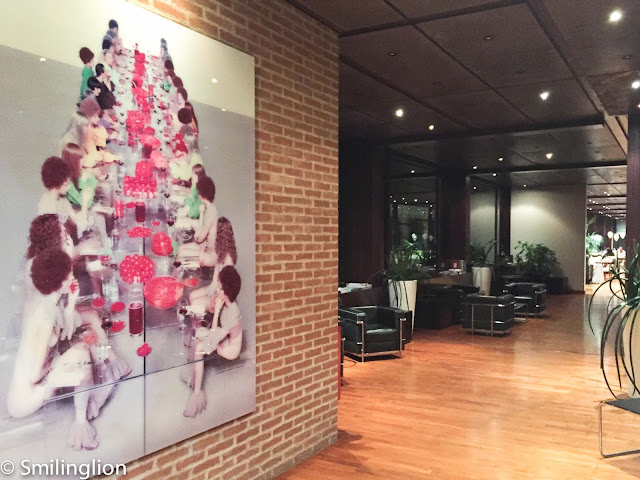 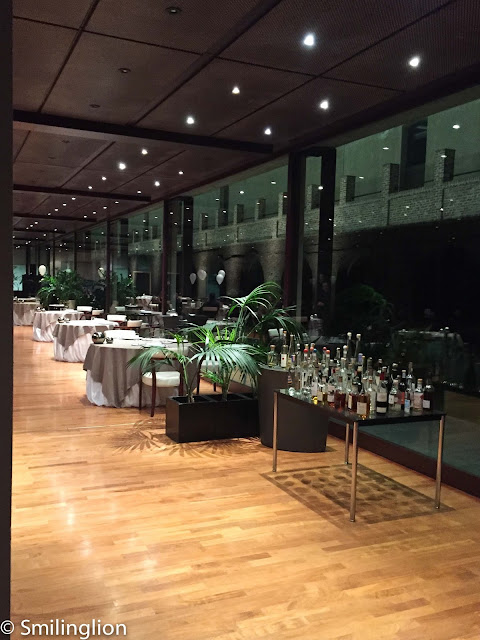 It was a quiet night with only maybe three tables dining that evening, and with Chef Scarbin away from the kitchen it felt that the restaurant was understaffed. Throughout the evening, the service, though at most times of the highest expected standard, struggled with keeping up with the rhythm of the meal with us waiting unusually long for some courses and them forgetting to serve us the wine we had chosen.

We were served the amuse bouche almost immediately after we took our seats, even before we were shown the menu. This was a good relaxing start to the meal as we could slowly browse through the wine list and menu while snacking on the selection of small snacks (and a glass of gin as an aperitif). 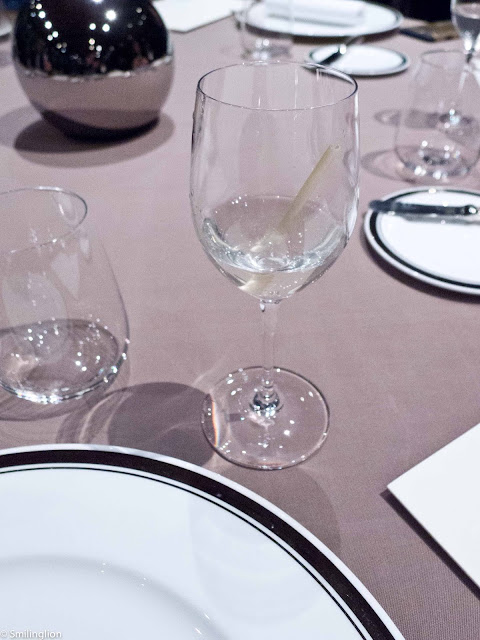 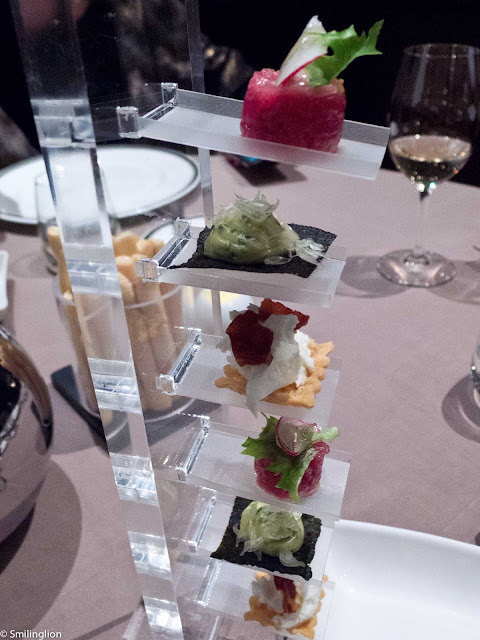 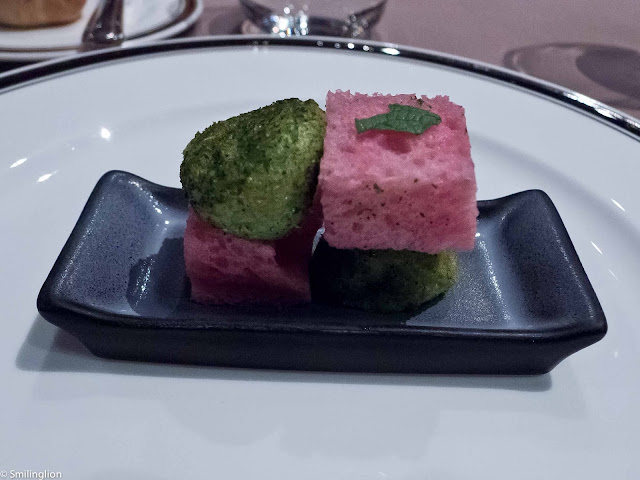 In a development which merits we are still debating till today, we were offered the tasting menu which could be taken in the normal or reverse order (the latter meaning that we started the menu from the main course backwards until the appetisers). This was unprecedented in our experience, and after discussion with our fellow diners, we decided to opt for the reverse menu. One of the factors which drove our collective decision was that in the 2 weeks prior, we had some very large and long dinners to the point when we felt too full by the time the main courses were served, so it would be interesting to try the main courses first while we were still hungry. Another consequence of this decision was that we would have our red wine first (a 2004 Barolo Paolo Scarvino) and then the white wine (a 2007 Batar) which was also unprecedented.

At the start of the meal proper, it seemed that we had made the right decision. The "All'ortolana" Pigeon and Gin & Kidney were brilliant and being as hungry as we were at that time, we gobbled up the biggest dishes and main courses of the menu with relish. 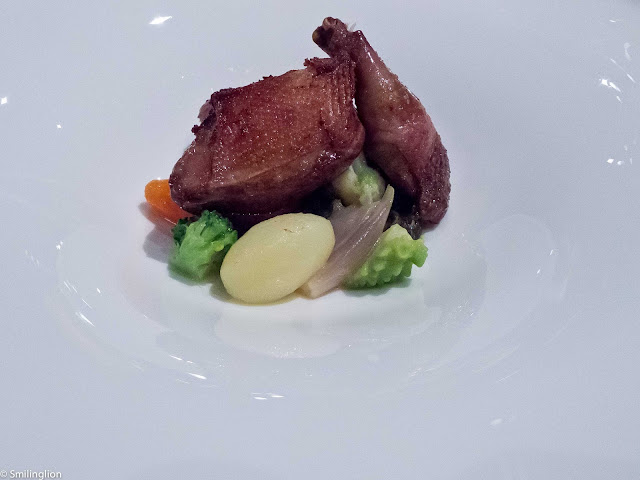 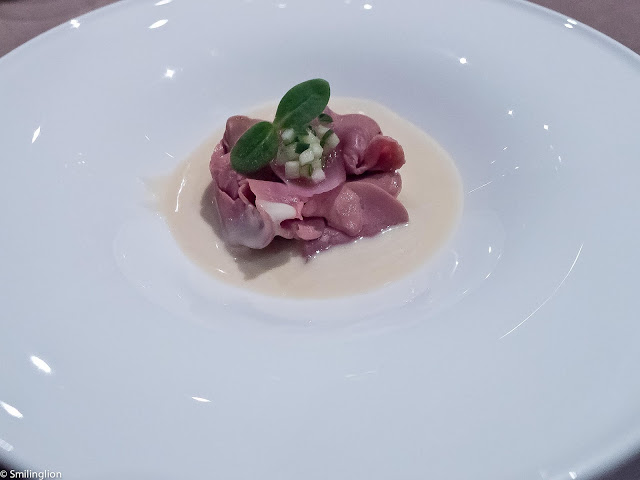 The Saltimbocca - Zero was a tad salty and a letdown (we bizarrely found toothpicks embedded in the dish to hold the ingredients together, which the waiter told us to look out for when we were served the dish). However, the Felicetti "Trick" Spaghetti, Ramen and Squid (we didn't expect to have to use chopsticks here) and Verace Aubergine (clams and aubergine) were excellent. 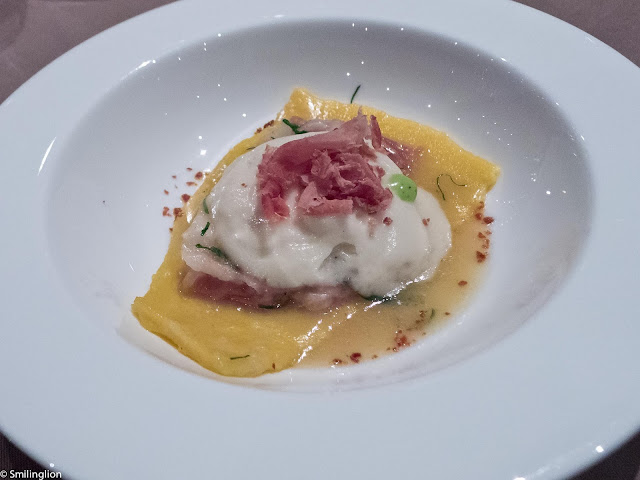 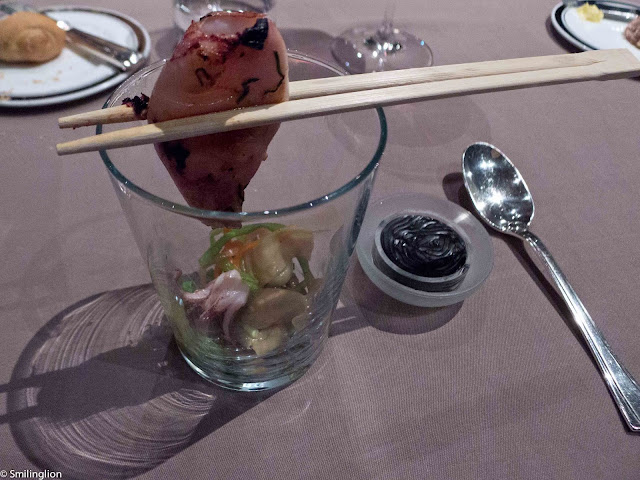 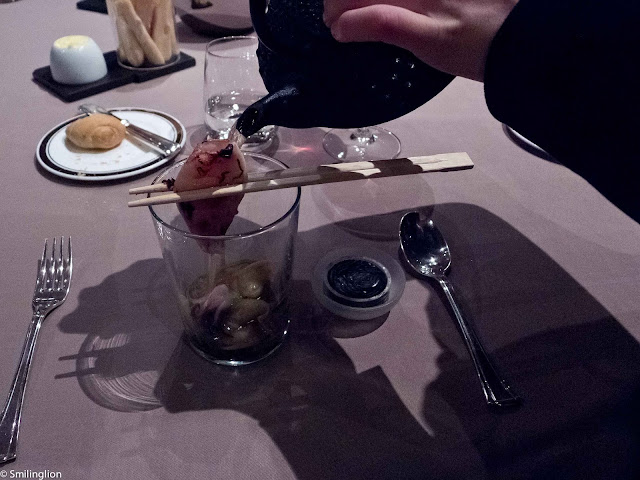 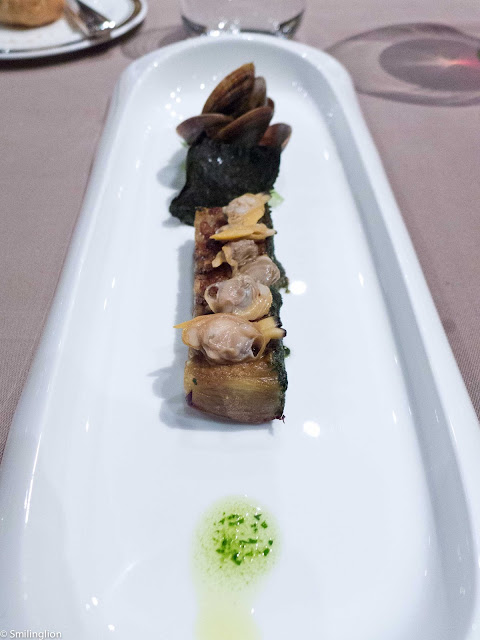 It was at this point when the meal started to get a bit flimsy and whimsical. The "Louboutin" Pepper and Anchovy was a piece of toast with anchovy paste on a bed of egg roe, which, when the toast was used to wipe up the roe, resulted in a 'red sole' which was reminiscent of the cult women's shoe brand. The Bubble Milk was a mishmash of unrelated textures and flavours, with the foam, egg and tempura struggling to make sense of each other. The Scallop 5 Points "Sassoon Vidal" was five pieces of raw scallops which could not be distinguished from one another. 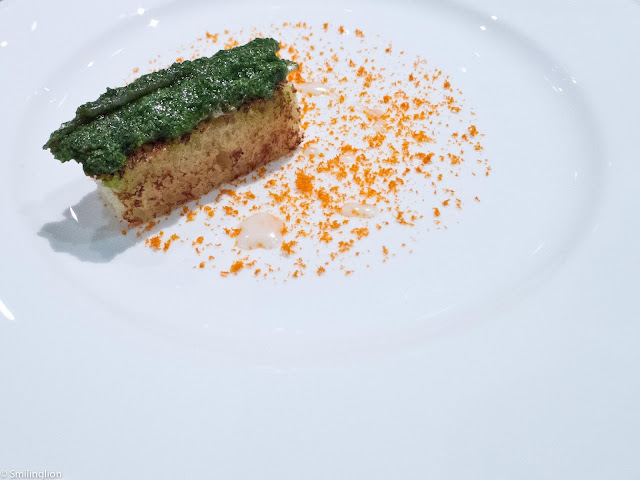 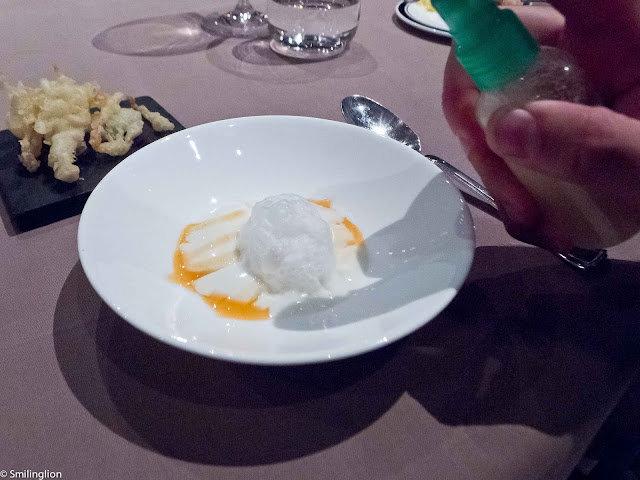 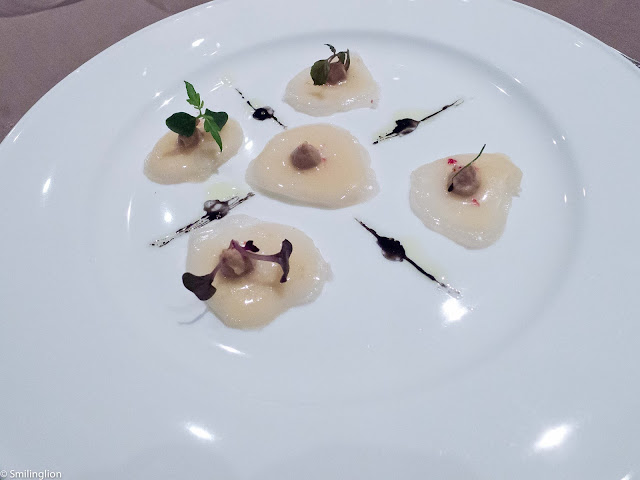 The last course in the reverse menu was the Iced Salad and Oysters. This was a redeeming factor in the meal and was stunning. The dish of frozen vegetables, freshly shucked oysters and iced brine was refreshing in taste as well as in concept. 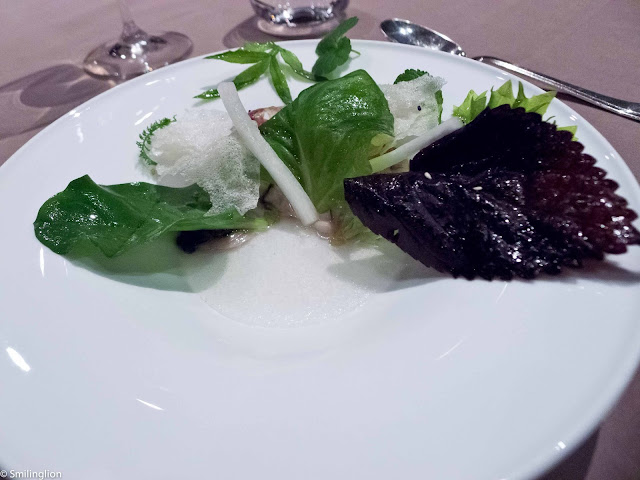 In keeping with the seesaw nature of the dining experience, the cheese course of the rather unremarkable English cheese (Stilton) was quite disappointing. 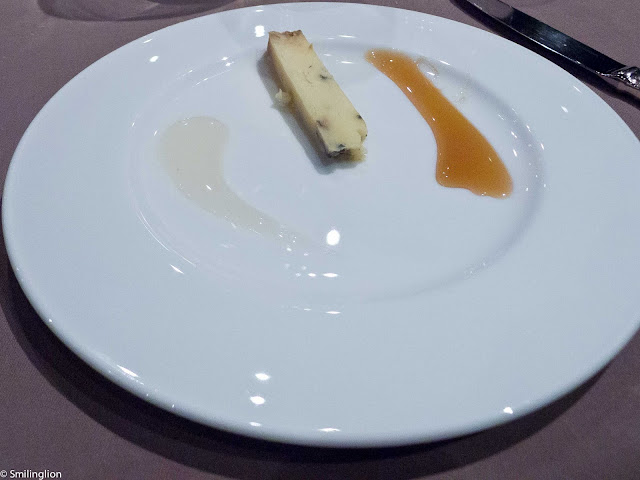 It did not get better from there. The desserts of Little Midnight Doughnut, Chocolate and Cold Fusion - Cyber Elio Campari were uninspiring. Even more strangely, we were then given a helium balloon each attached to a bag of candy, together with the usual mignardises.

At the end of the meal, we couldn't decide if we enjoyed the dinner or not (till today some of us still cannot make up our minds on this). The restaurant premises and ambience were stunningly beautiful, and some of the dishes (especially the main courses) were of the highest order, but there were also a few big misses and the overall lack of enthusiasm by the kitchen and service staff was quite apparent to us. Also, the concept of the reverse menu in hindsight did not really work: after the heavy and rich flavours of the main course, naturally the lighter-flavoured appetisers would taste bland in comparison.

In an era where the 'modernist' style of dining is getting more prominent with the international food critic community (the Michelin Guide being no exception), it was surprising to us that Combal Zero would lose one star. Though our meal here highlighted a noticeable lack of focus and direction in parts of the cuisine, it did show us some glimpses of its potential, suggesting that a return to its past glories may not be very far off. 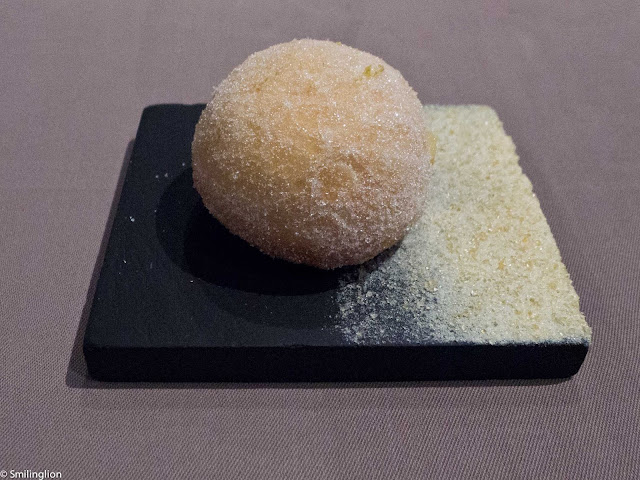 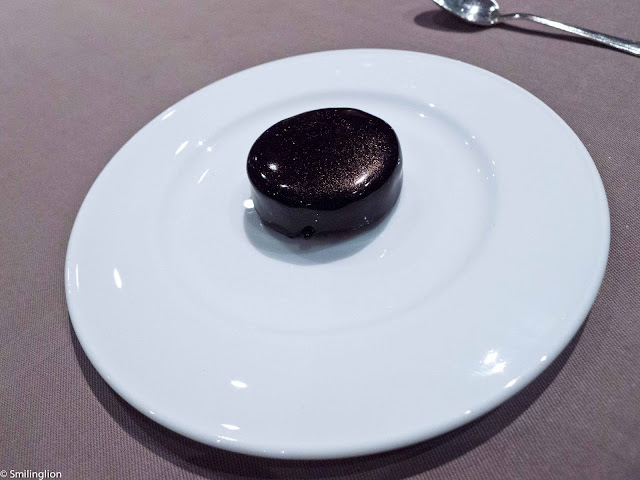 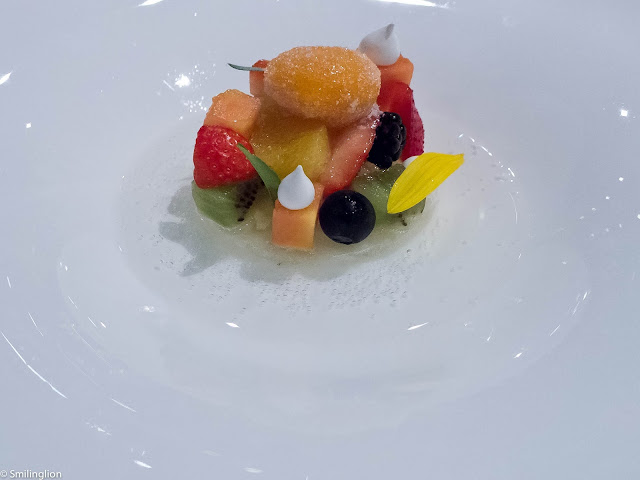 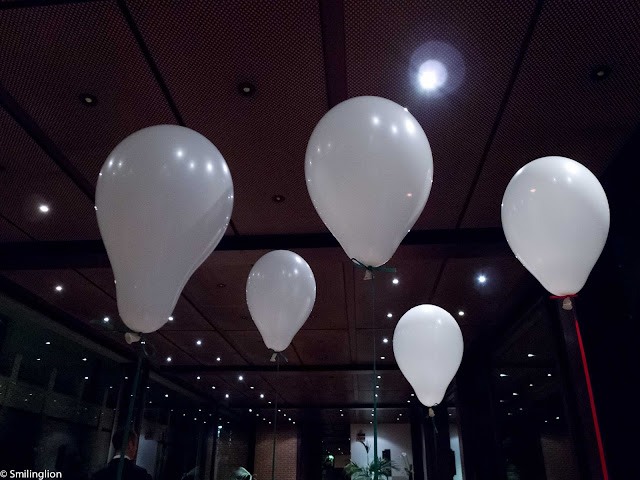 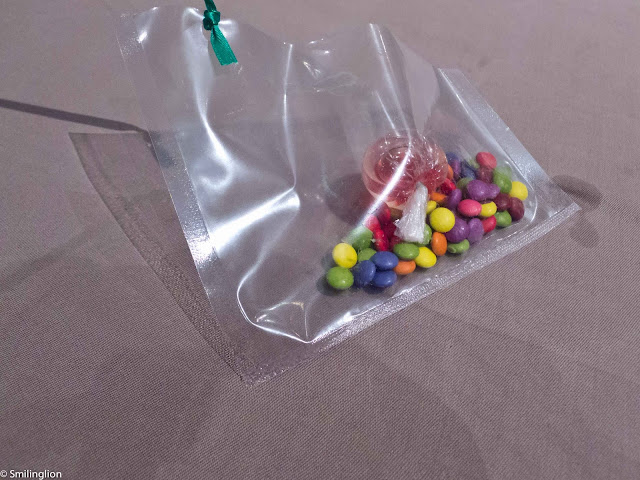 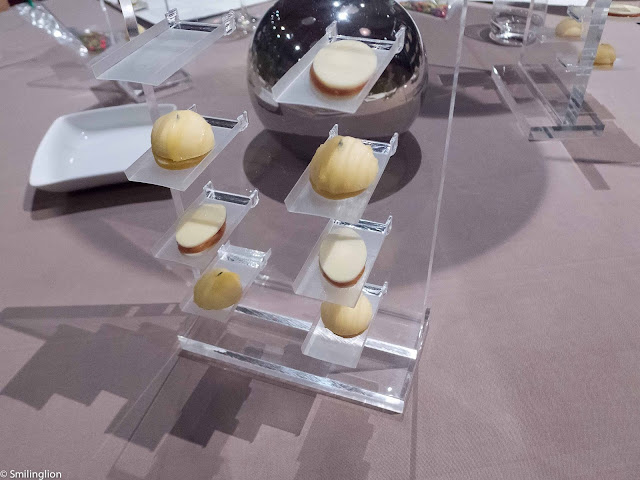