This would be our third time dining at ABAC (see earlier reviews: October 2012 and July 2013). Unlike the previous times, we were here for dinner instead of lunch and were dining in a group for a change. ABAC at night felt very different from the day; the lovely manicured gardens were not visible and we would dine in an austere room surrounded by darkness. The faint whiff of cigar added to the air of chic sophistication and though the restaurant was full that night, the diners all seemed to be afraid to raise their voices above hush tones in fear of piercing the cool vibe permeating the room. 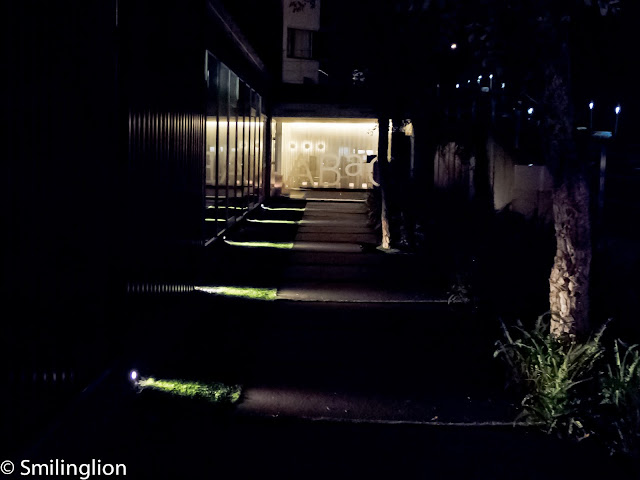 Dining in a group this time, we could be more adventurous in our choices of wine and one of our dining companions suggested to the sommelier a particular white wine which he was interested in (the R.  Lopez de Heredia Rioja Reserva Viña Bosconia). As it turned out, the restaurant only had one remaining bottle of this wine and it was a 1981 vintage. It was probably the oldest white wine I have ever drunk, and it was quite magnificent. For our red wine, we had a very complex 2009 Priorat by Planots which we picked from quite an impressive wine list. 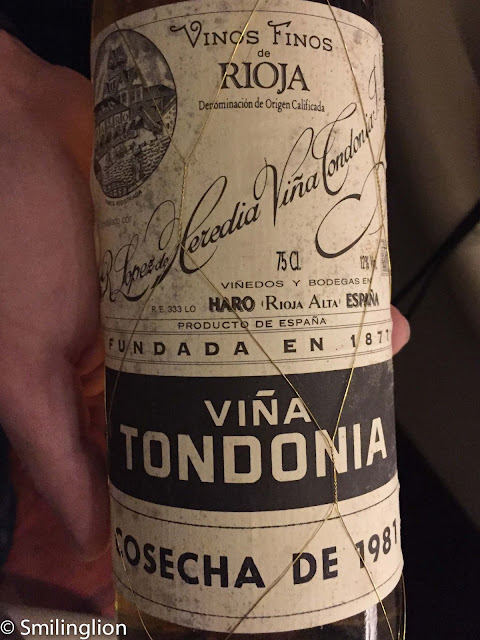 Like our previous meals here, we went for the Grand Menu, which was 16 courses and ambitious for us given that it was already 9pm when we started dining and we didn't have the Spanish inclination for eating past midnight. The restaurant was running at full capacity that night, with a large private event taking place in the private dining room, and as a consequence, we felt that they were slightly understaffed and it took us a while to get the attention of the waiter to take our orders. This was unlike our previous lunches here whereby (perhaps because they weren't full when we dined here then) we were fastidiously taken care of throughout our meal.


The meal started with an aperitif of sorts: the bloody mary on the rocks. This was reinvention of the classic cocktail, with the tomato juice in this case replaced by a concentrated tomato essence and a distinct tabasco after-taste. 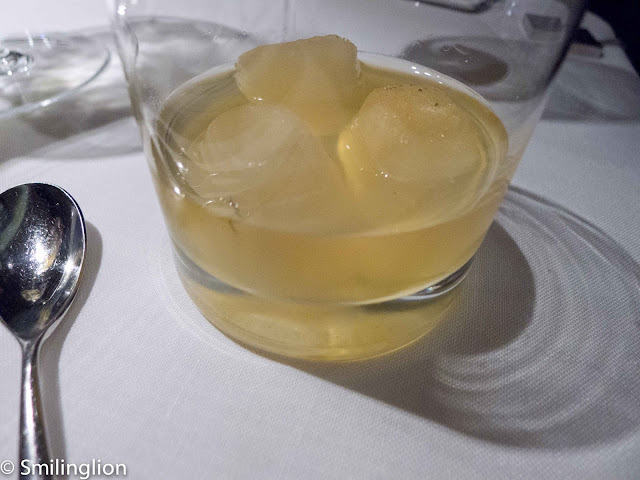 The clams with caviar, lime and sea butter was simple and not particularly memorable except that I tried to eat the accompanying seaweed before realising that it wasn't meant to be consumed. 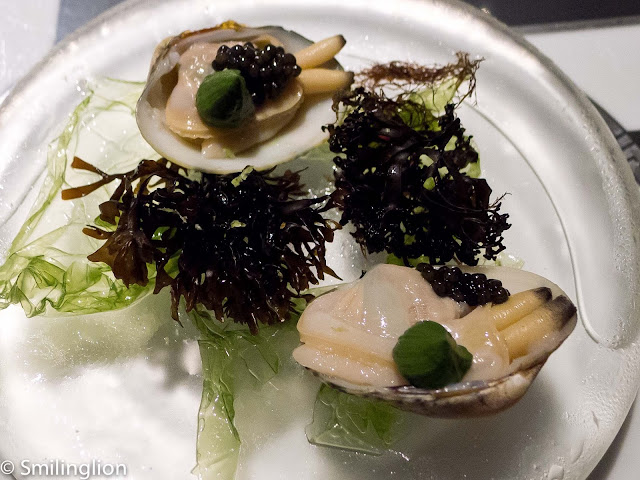 It was when they served the sweet corn taco and foie gras with mole ice cream that the dinner really started to take off. The foie gras in this case was in the form of shavings over the taco and thoroughly enjoyable. 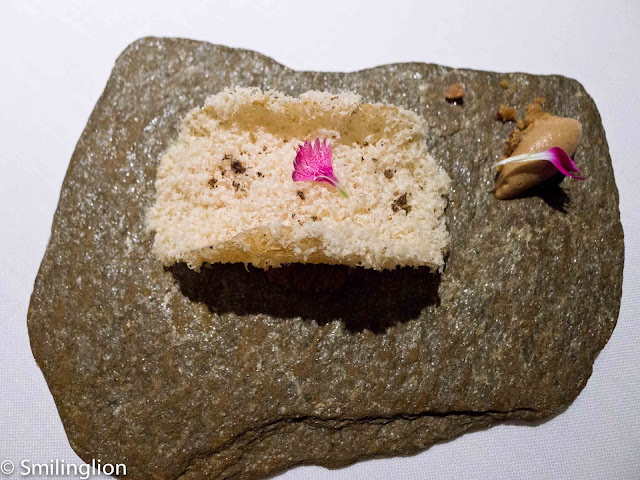 The tartare of battered squid rings with citruses was also very good. The fresh chopped raw squid was paired perfectly with the crispy bits of batter. It was an interesting reinterpretation of the deep fried calamari, in that the batter and the squid were actually separate in this dish. 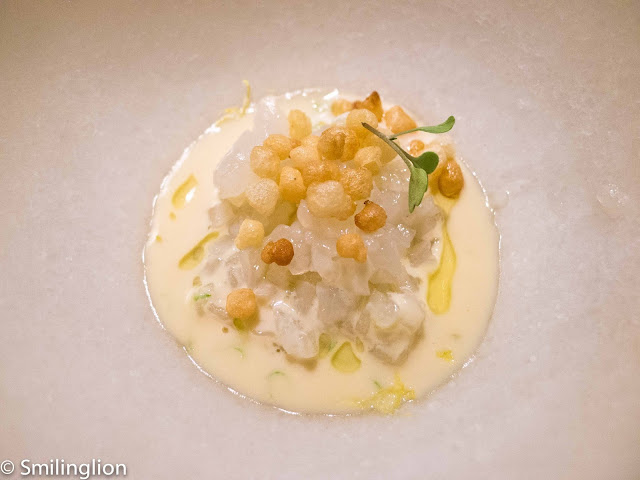 At this point, the meal, still at the amuse bouche stage, was still very light with emphasis on sweet and/or sour flavours. The lulo ceviche with oyster and pisco sour was refreshing though I felt the sorbet tended to overpower the underlying oyster. 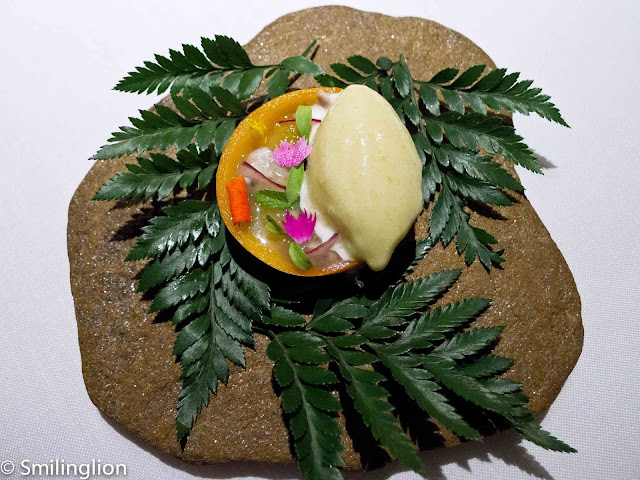 The next dish, our chinese bread, fried brioche, grilled eel, wasabi and smoked aioli was when the meal turned towards more substantial and focused flavours. This was like the traditional deep-fried mantou familiar in Chinese cuisines, but with a piece of grilled eel in it instead of the usual braised pork. It was very good. 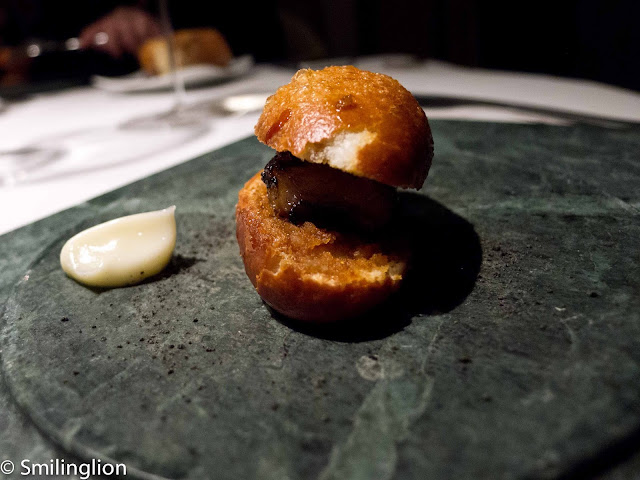 Earlier on in the meal, the waiter poured water over a pot of prawn heads and started boiling it at our table. 15 minutes later, he served the saffron and orange-infused prawn bouillabaisse with plankton bread. We could also suck the flesh out of the prawn heads. Despite the rather simple mode of preparation at our table, the bouillabaisse was intensely rich. To me, this was a statement of intent by the chef, as the prawn stock was an assault on our senses and perked up our taste buds for the rest of the meal. If anyone didn't know the meaning of 'umami', this dish provided the perfect explanation. 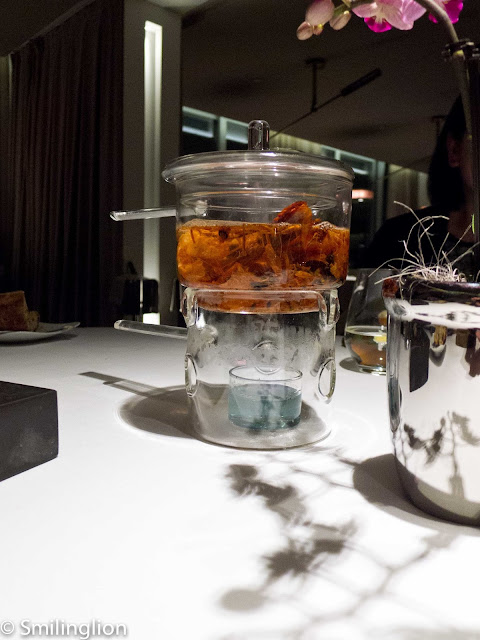 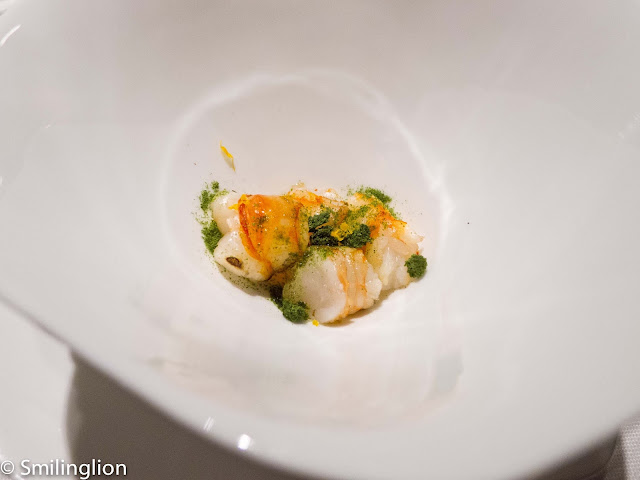 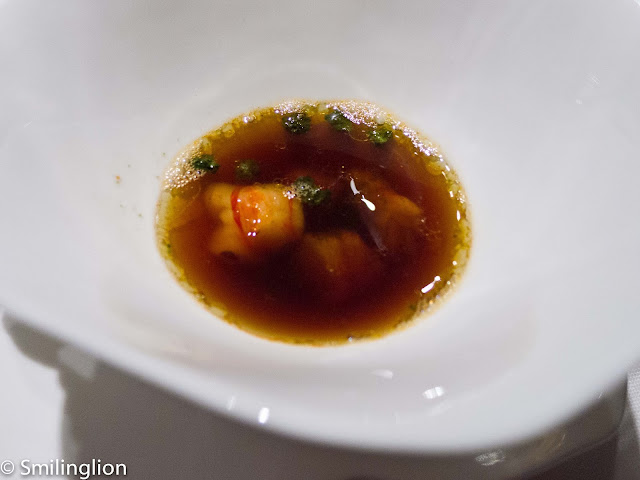 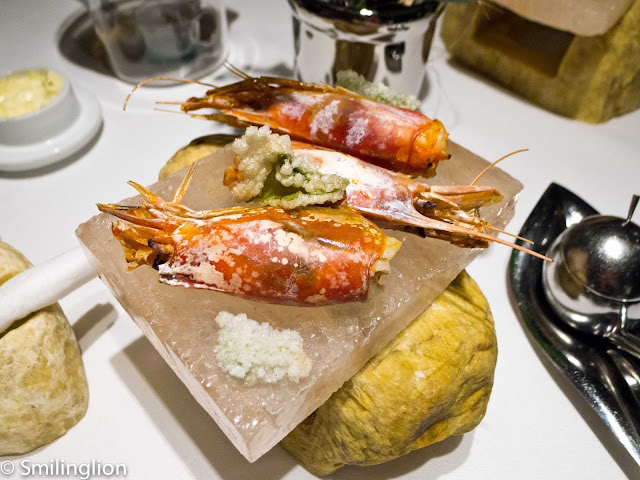 Continuing the umami theme, the roasted lobster with baby radishes and coral emulsion with cabbage chlorophyll was also excellent. The shellfish stock was balanced out nicely by the herbaciousness of the green chlorophyll. 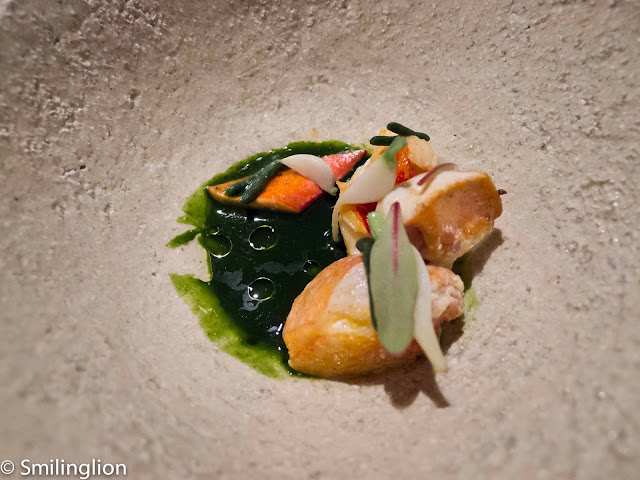 The high notes of the meal continued with the tuna skins rice cooked in eel stock with spring onions pickled in beetroot; the umami flavours this time maintained by the eel stock. This was exceptionally enjoyable. 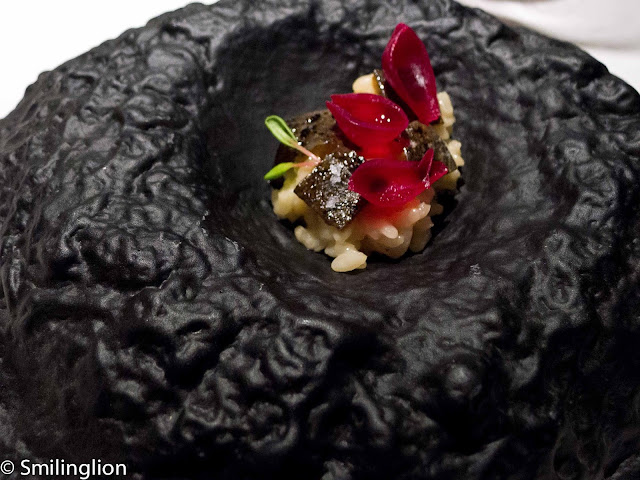 The roasted onion juice with smoked scamorza bubbles, walnuts and orange zest was no let-down either. The rich broth was served in a hollowed-out roasted onion and the cheese was in the form of bubbles which would explode in the mouth. 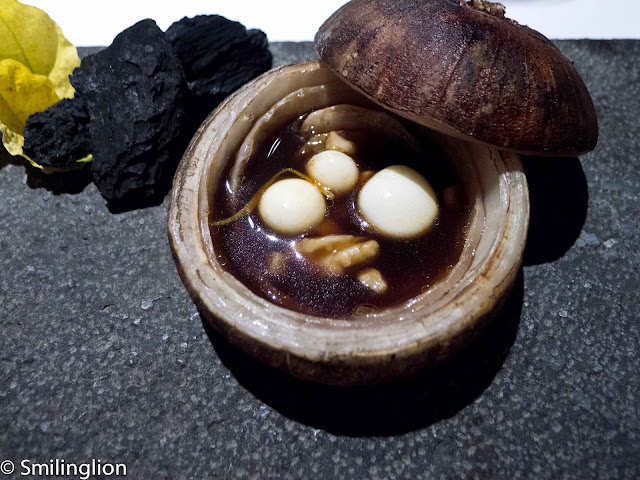 The other dish which the waiter cooked table-side was the seaweed steamed sea bass with fennel, velvet horn and baked fishbones juice. He used a rather innovative glass pot over a glass burner (similar to the one used to make the bouillabaisse) to poach/steam the sea bass for 5-6 minutes before plating it in front of us. The cabbage chlorophyll made an appearance again this time to balance out the very rich savoury baked fishbones reduction. 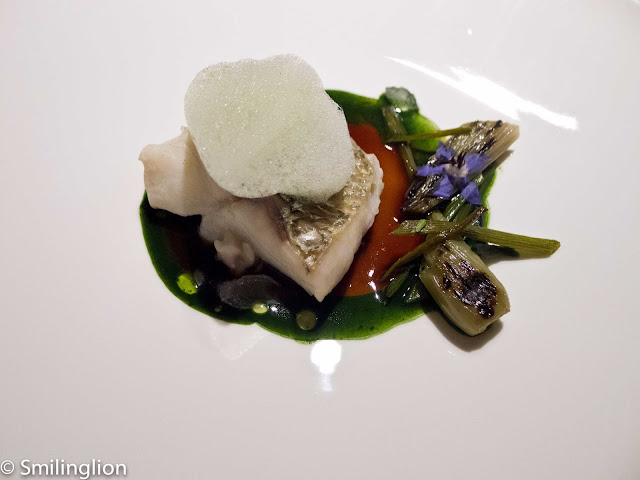 Next was the pine nuts a la carbonara, prepared like risotto, with egg yolk and truffles. This was again another very flavourful and savoury dish, and was cleverly executed. 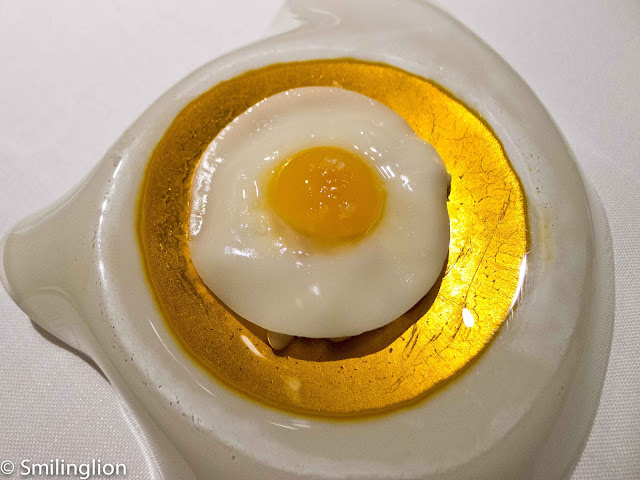 It was already past midnight and we were all fading. As a result, I didn't really enjoy the chicken trimmings with small langoustines, spicy juice and carrots with cumin as much as I perhaps should have if I were not trying so hard to keep awake. But one thing which was noticeable again was the very intense sauce which was used. 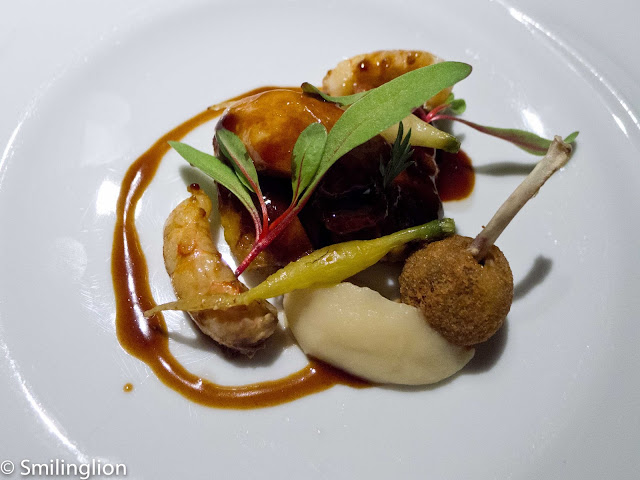 In light of the very impressive courses earlier, in particular the middle part of the meal, the desserts were a relatively tame affair. The tonic bubble with mango, candied lemon and juniper was quite nice and refreshing, and the canolisù (a tiramisu with dark chocolate instead of coffee - in the form of a crispy thin dark chocolate roll stuffed with cream) was very good, but the chocolate and white truffle rocks with cottage cheese, honey and walnuts was a bit of a let down at the end of the meal as it was quite ordinary.

It was, taken in its entirety, a very impressive meal, coupled with some wonderful wines. The experience was somewhat adversely affected by the slower than usual service (this was the first time in recent memory that I have had to wave furiously to get service at a 2 or 3 Michelin Starred restaurant) and the length of the meal stretching into the wee hours of the morning (we finished eating at 1am having started at 830pm) especially while we were still a bit jet-lagged. 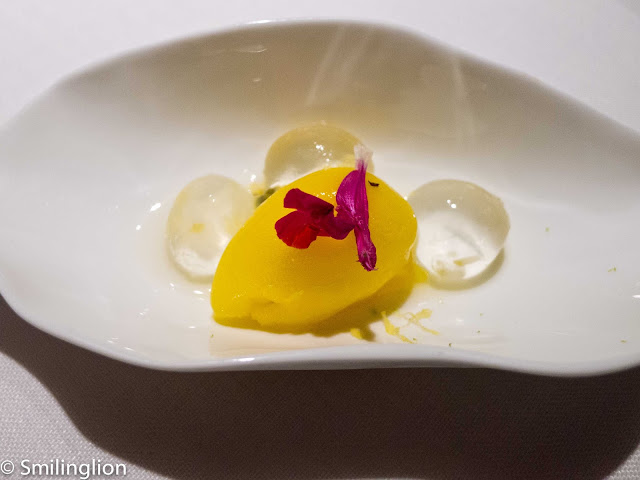 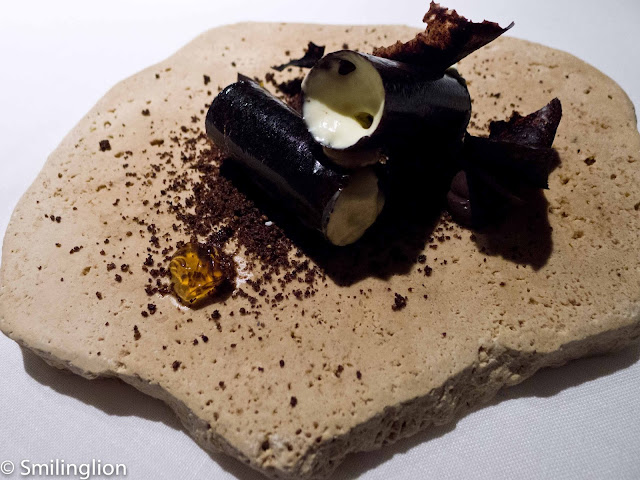 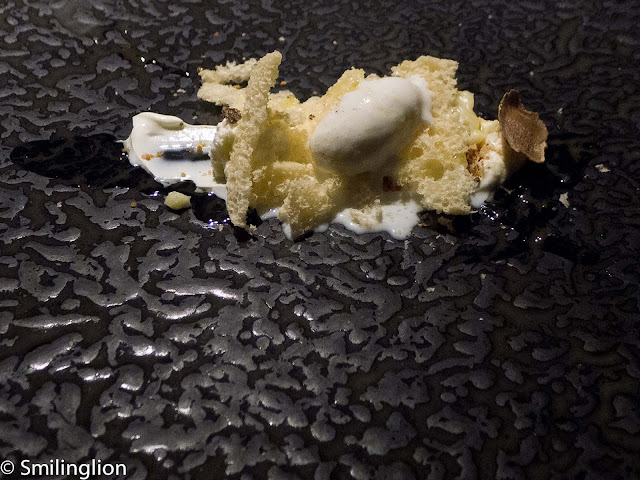