Update: Les Amis was awarded 2 Michelin Stars in the inaugural Michelin Guide for Singapore in 2016.

Les Amis is the grand daddy of high-end French dining in Singapore. Being the oldest independent European fine dining restaurant here, it has survived several global recessions and numerous shifts in culinary trends in this small and highly competitive market. From the days of it being the choice of expense-account-totting stockbrokers to a period of time when it was practically the personal kitchen of notable Indonesian tycoons, to today when it has to compete with younger competitors like Iggy's, Andre, Jaan just to name a few, Les Amis has stood the test of time. It can also claim credit in the shaping of Singapore's fine dining scene, as it can count Justin Quek of Sky on 57, Ignatius Chan of Iggy's, Gunther Hubrechsen of Gunther's among its alumni.

Of all the fine dining establishments in Singapore, it probably has the most enduring brand name, as it is still going strong despite having to rebuild its kitchen personnel several times due to the departures of its prominent head chefs over the years. Its kitchen is now helmed by none other than Sebastian Lepinoy, formerly of the now defunct Cepage in Hong Kong. Cepage was one of our go-to restaurants in Hong Kong and so we were delighted to find out last year that Chef Sebastian had relocated to Singapore. Since then, we have dined at Les Amis a few times and have found that Les Amis under Chef Sebastian has become more approachable and affordable (relatively speaking), and the food has also become more consistent than we remember it to be.


The most recent meal we had here was this month, and it was lunch. Recently, Les Amis revamped its lunch menu to include a S$80 prix fixe 4 course menu where you pick each of the 4 courses from the a la carte menu, which we found to be of good value and variety. Also, we like that Les Amis offers a  small selection of reasonably priced half bottles of wines at lunch. In this instance, we had a decent half bottle Cru Beaujolais Bourgogne which was just right for the meal. 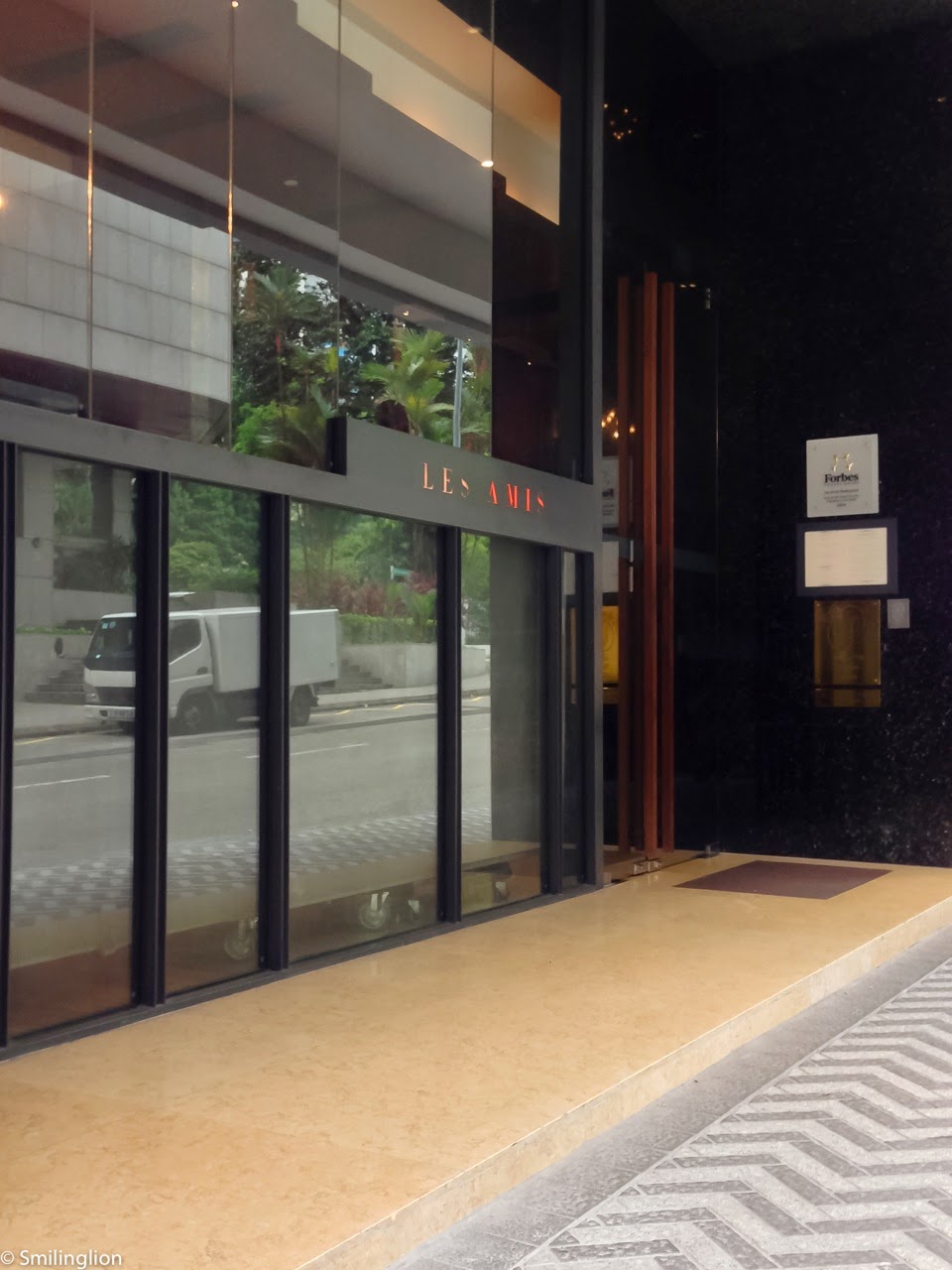 Foie Gras & Anago (millefeuille of anago and fine layers of foie gras, served with a radish and apple matchstick salad):  This was an old favourite of ours here, though this one disappointed us slightly compared to our previous meals here because the millefeuille was overpowered by the fishiness of the eel. Good effort nonetheless though it doesn't come close to the best eel/foie gras millefeuille we've had, which was at Martin Berasategui in San Sebastian. 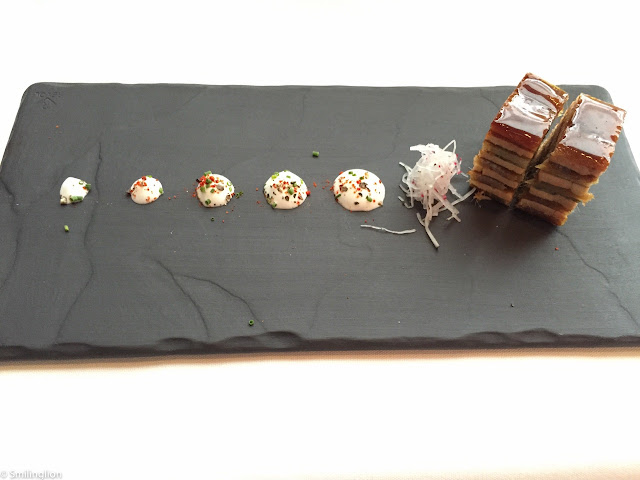 Lobster Bisque (an aromatic cappuccino of lobster with a touch of cognac balanced with celeriac royale and black truffle): The soup was thick and rich with generous chunks of lobster. 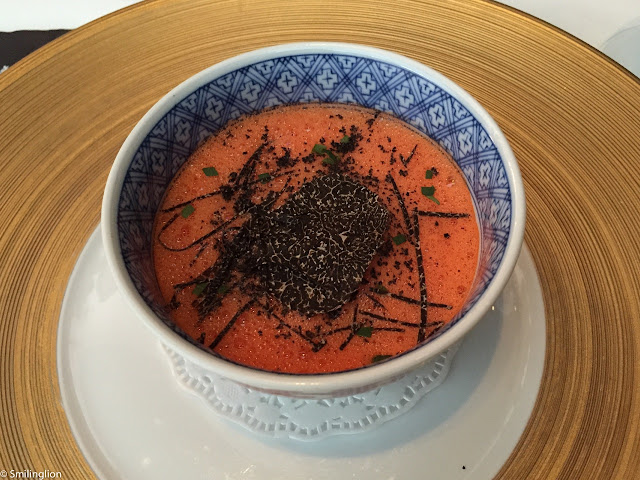 Mushroom Tart (grilled mushroom adorned with eggplant caviar, served on crispy tart and drizzled with extra virgin olive oil): This was a really lovely dish in its simplicity. 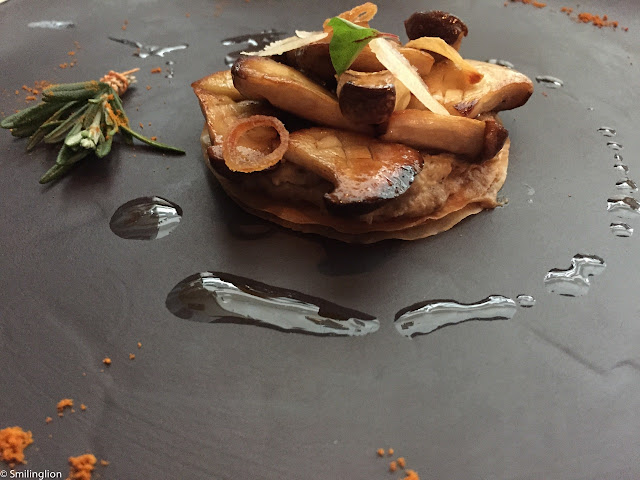 Pork Loin (charcoal grilled pork loin from the carpathian mountains with whipped potato puree and slow cooked carrots with cumin): The pork was grilled to perfection and retained its juices well. 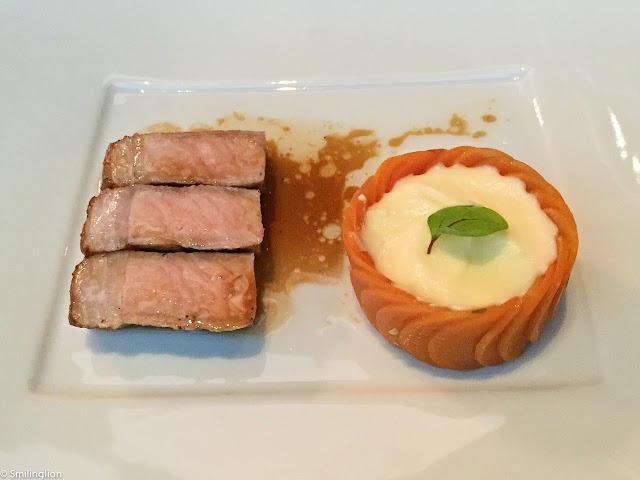 Crispy Scaled Amadai (pan fried amid with olive oil emulsion sauce): My only complaint was that it could have been a larger (the server did warn me when I ordered that it was quite a small piece), otherwise it was an excellent piece of fish in an olive oil sauce which was subtle and did not overpower the rest of the dish. It reminded us of a similarly excellent crispy scaled amadai we had some years back at Robuchon in Hong Kong where Chef Sebastian was the executive chef before he joined Cepage. 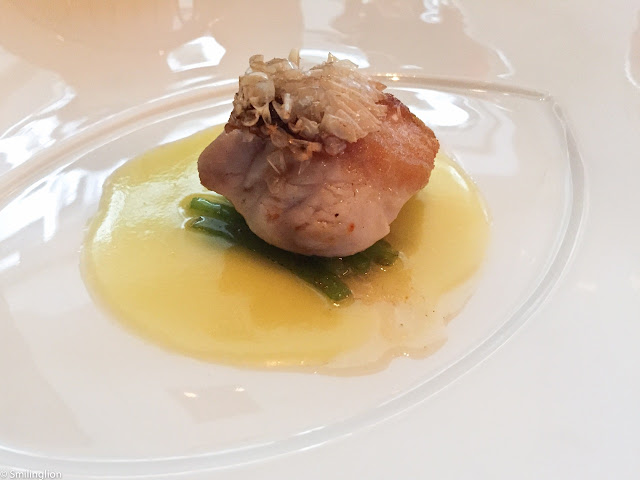 Hazelnut Tart (warm piedmont hazelnut and chocolate tart with praline ice cream): This was quite ordinary and the hazelnut in the tart didn't come out well enough against the chocolate. 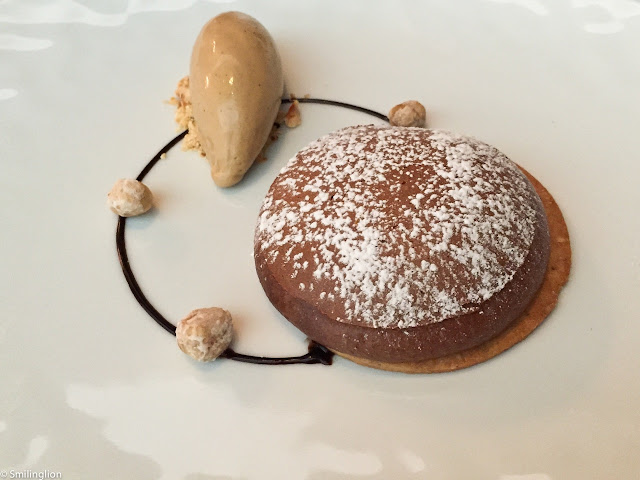 Rum Baba (with a light creme chantilly and blackberry coulis): The rum baba, one of our favourite French desserts, was quite wonderful here. The pastry was light and fluffy and the rum used was not overly bitter. The coulis was also surprisingly muted despite its appearance as I expected it to overwhelm the dish with its fruitiness. 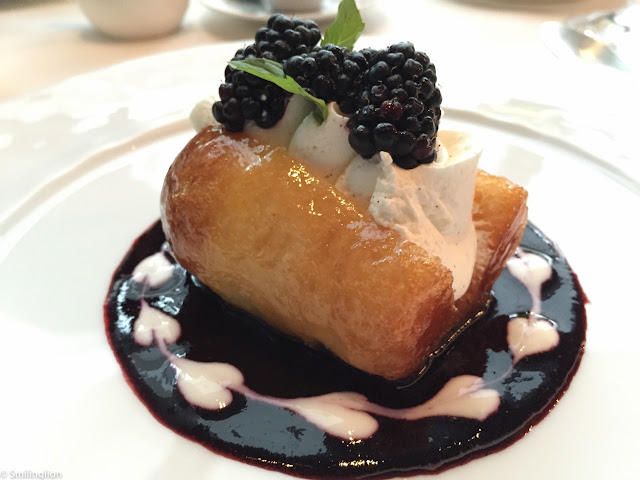 The mignardises this time were quite unimpressive though; they were sweet pastries which we put down after one bite. Bring back the madeleines please. 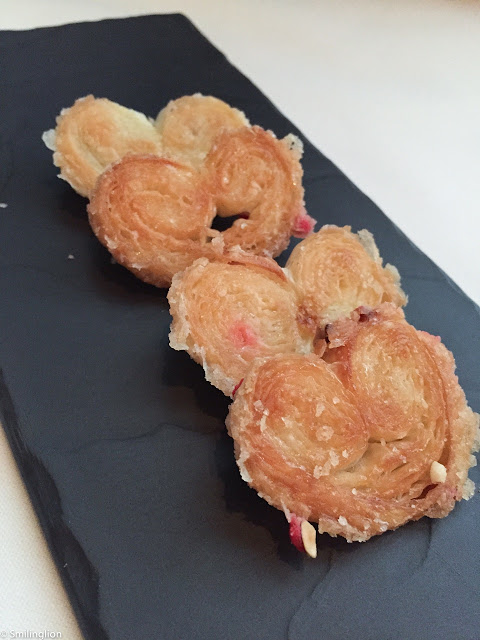 In all, it was a very enjoyable lunch, for what we thought was reasonably good value.

Below are photos from our various other visits to Les Amis (in 2014). We neglected to write about those meals then but looking back, the dishes which made the best impressions were the soft tomato jelly with avocado cream, the cold angel hair with Oscietra caviar, the sea bass and the baked Alaska. 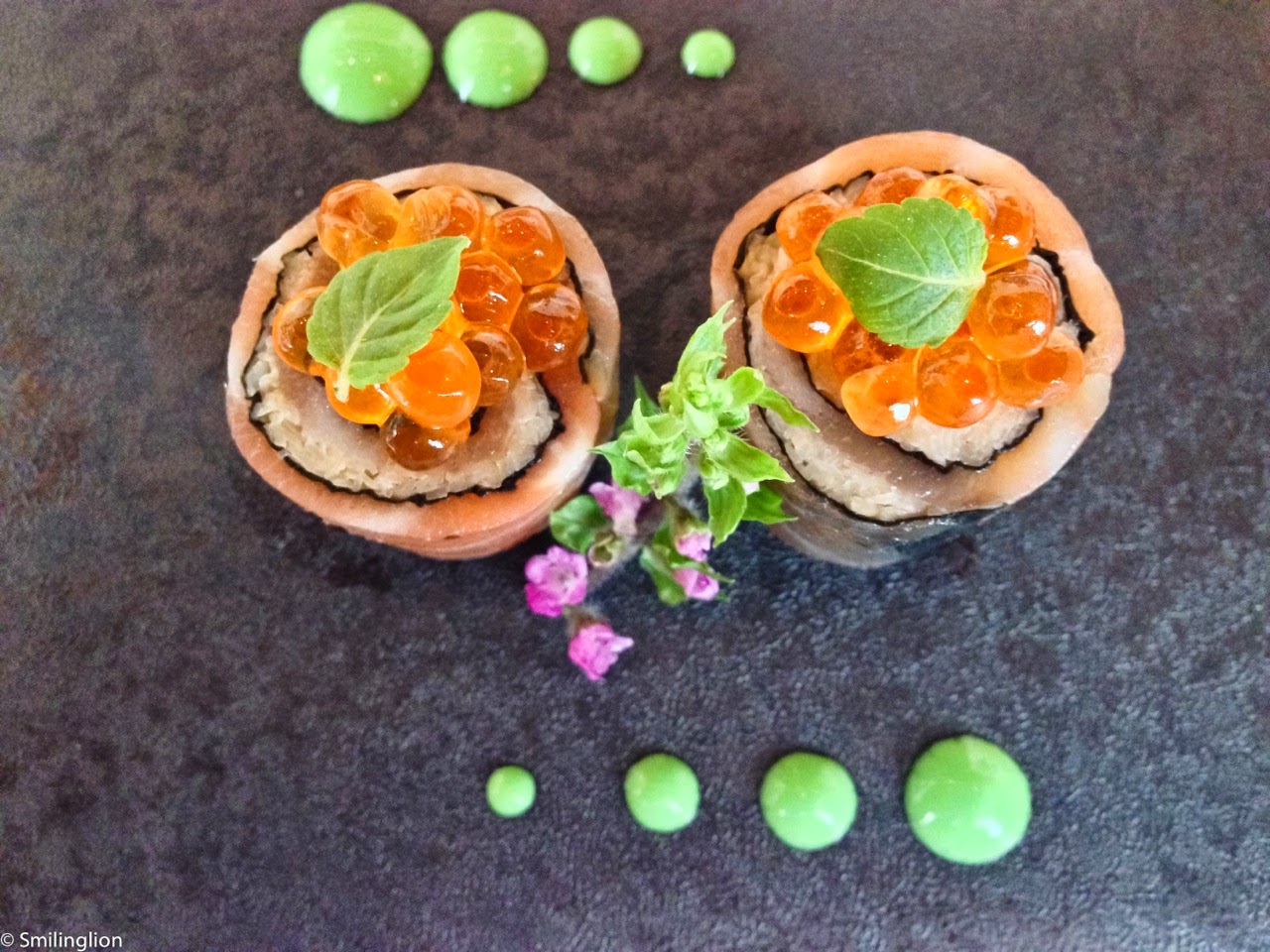 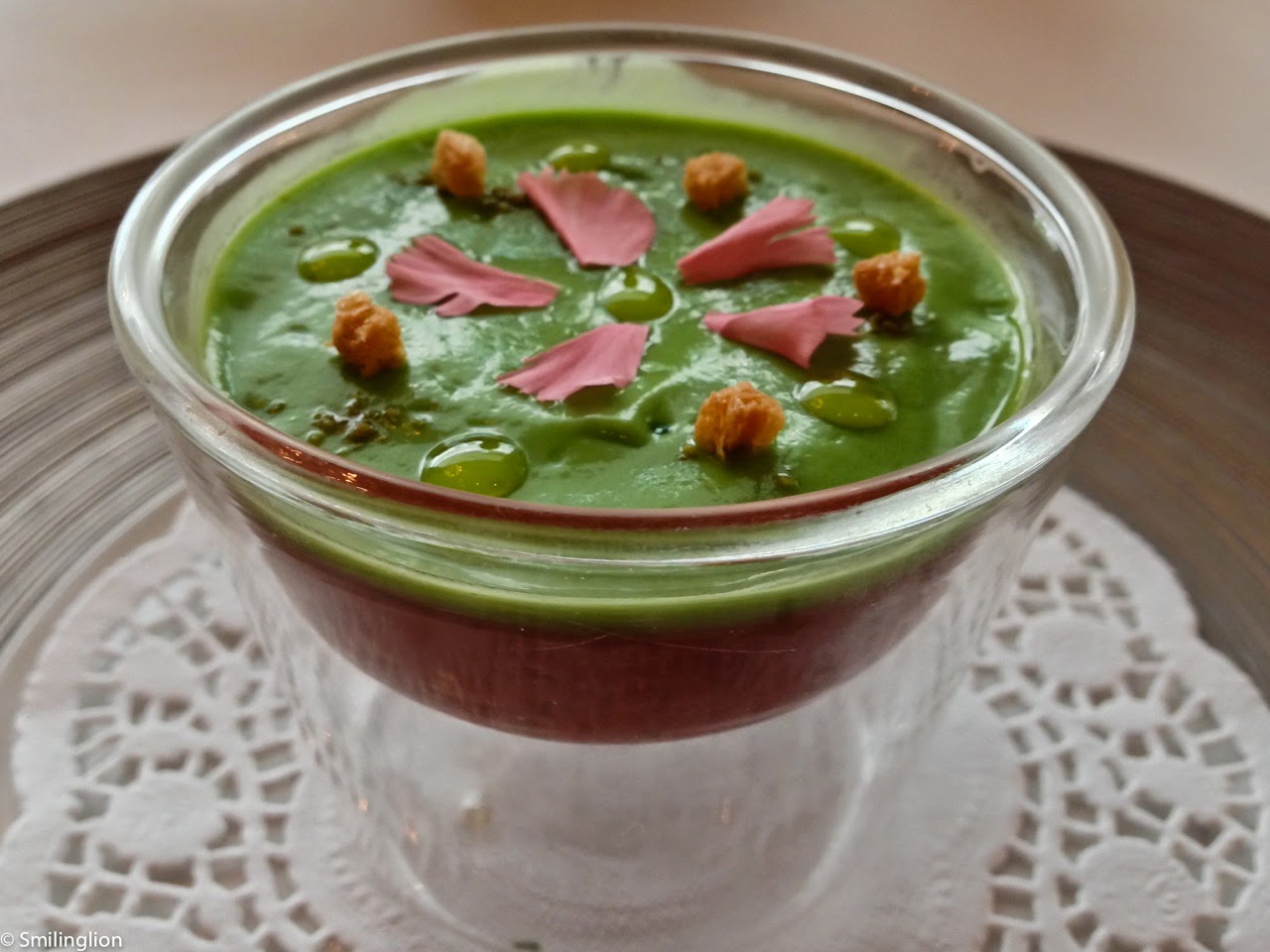 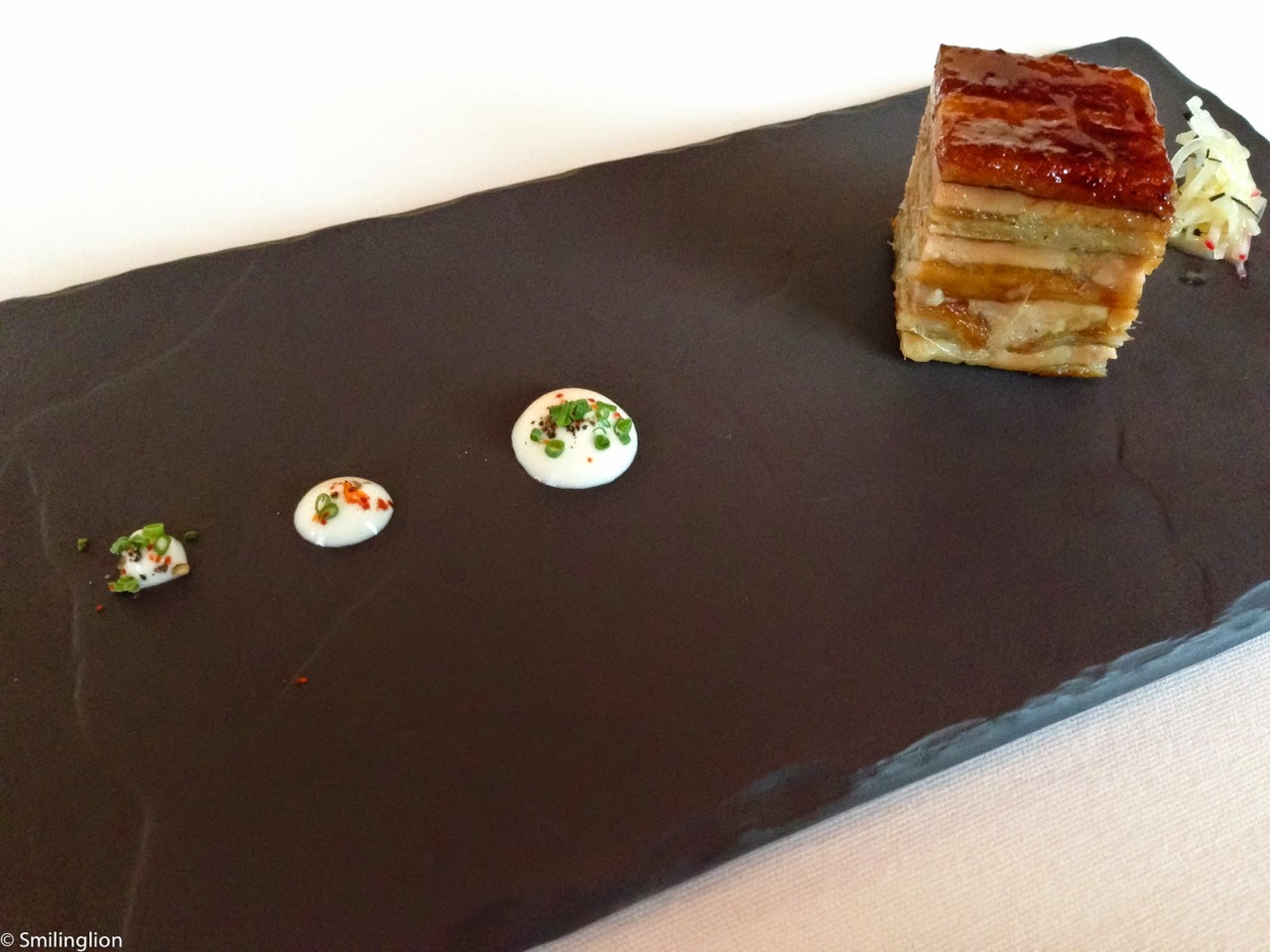 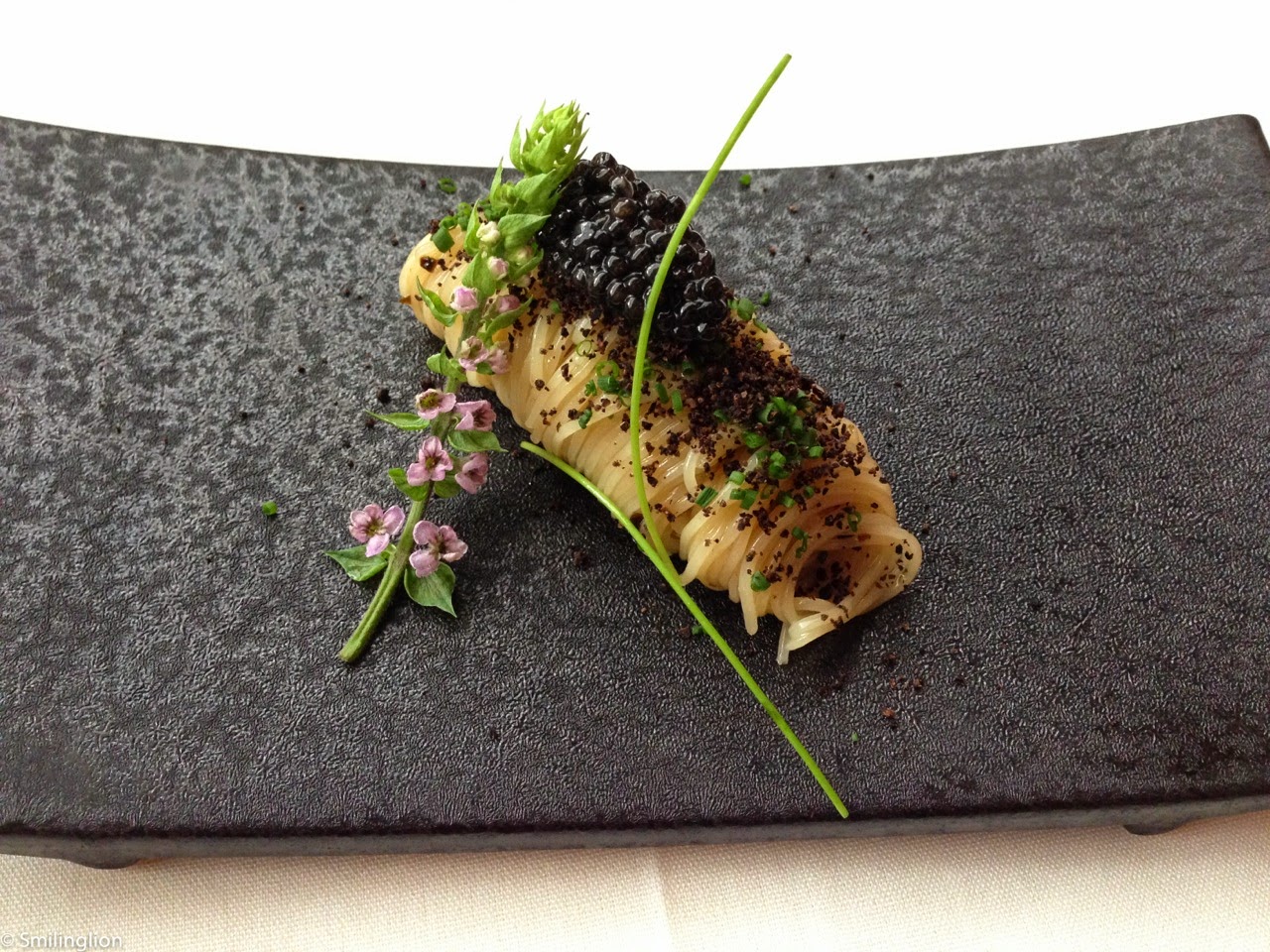 Crispy Cornouaille Langoustine, balanced with a 'Folichonne' side salad. 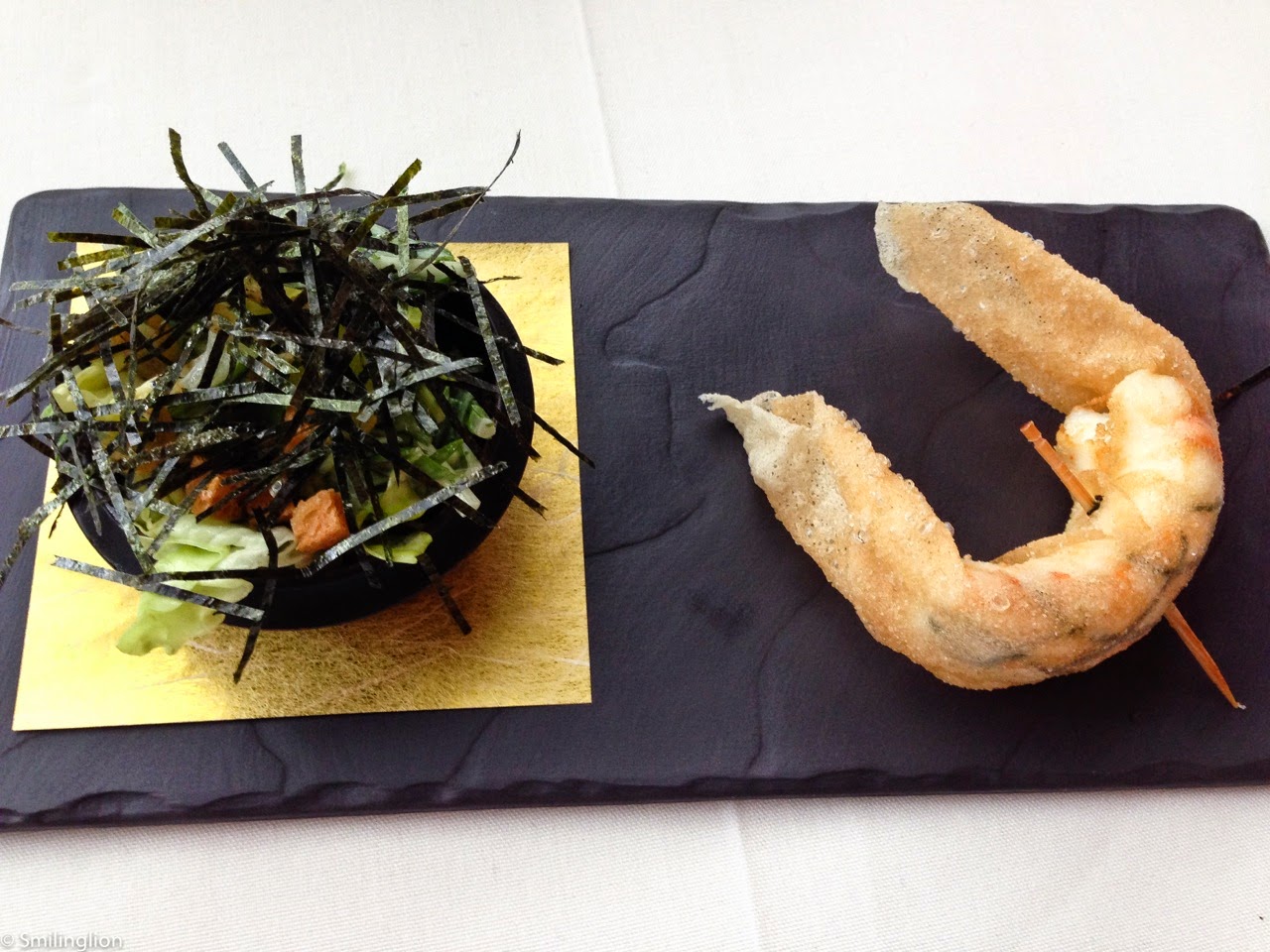 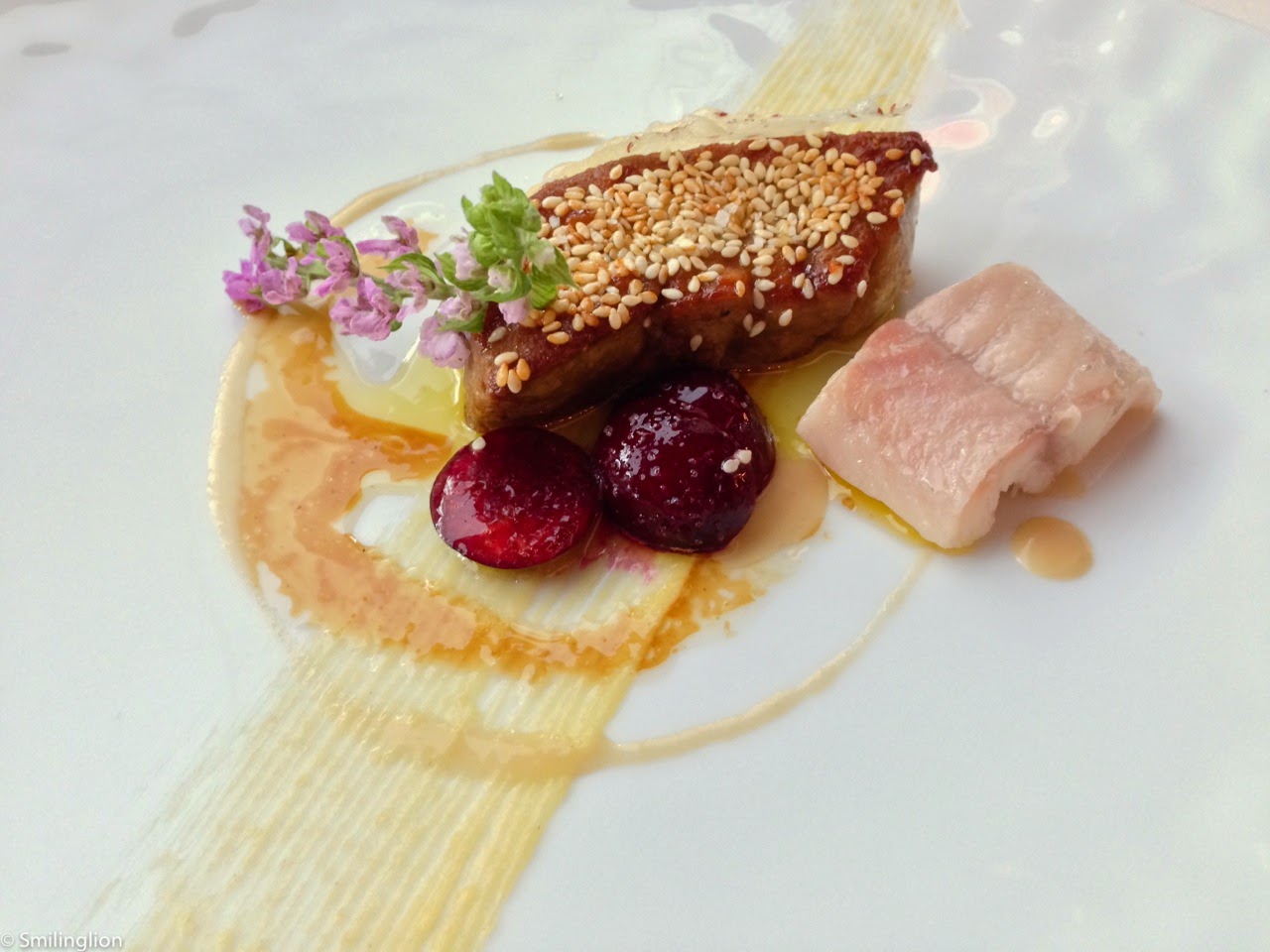 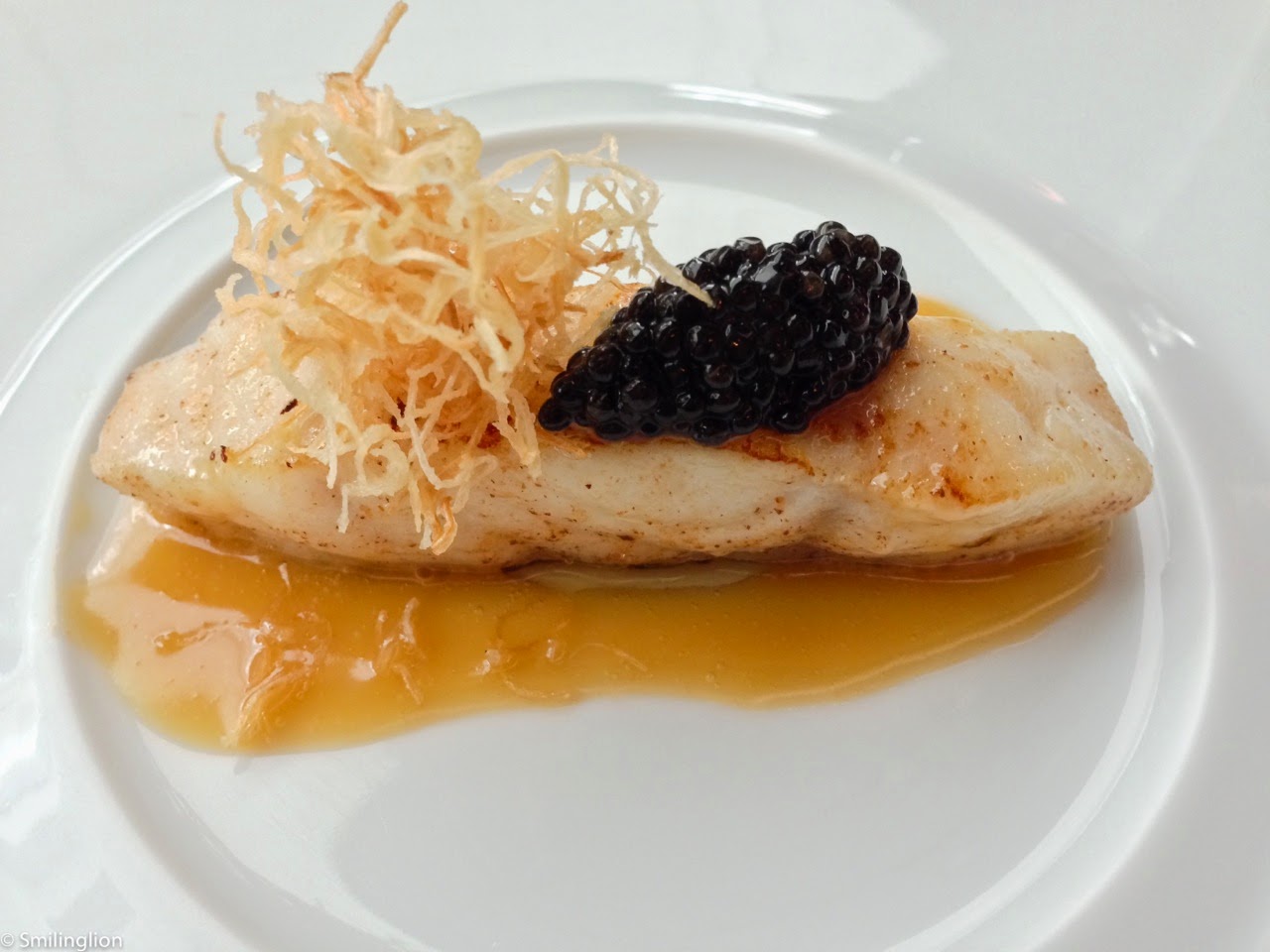 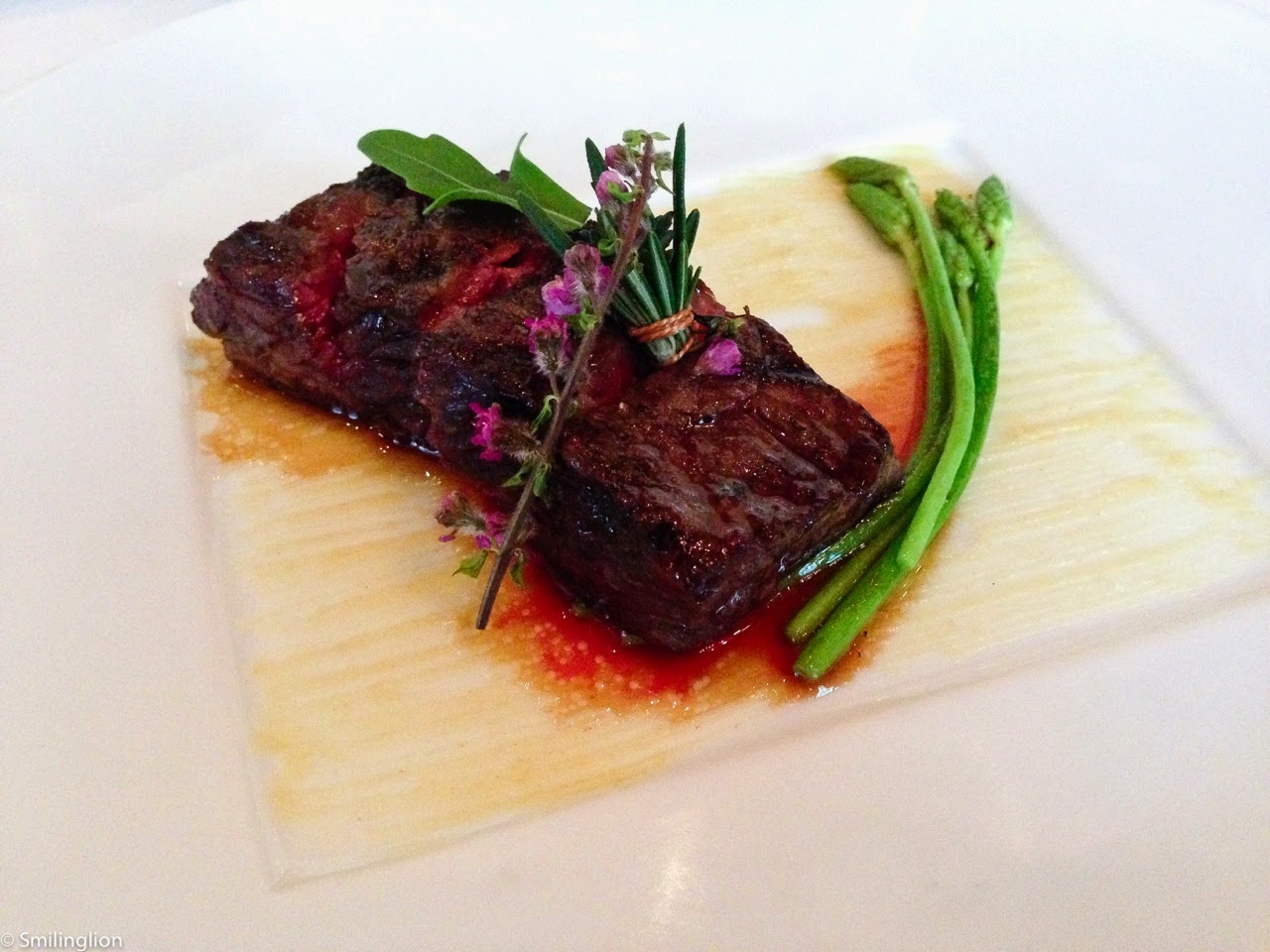 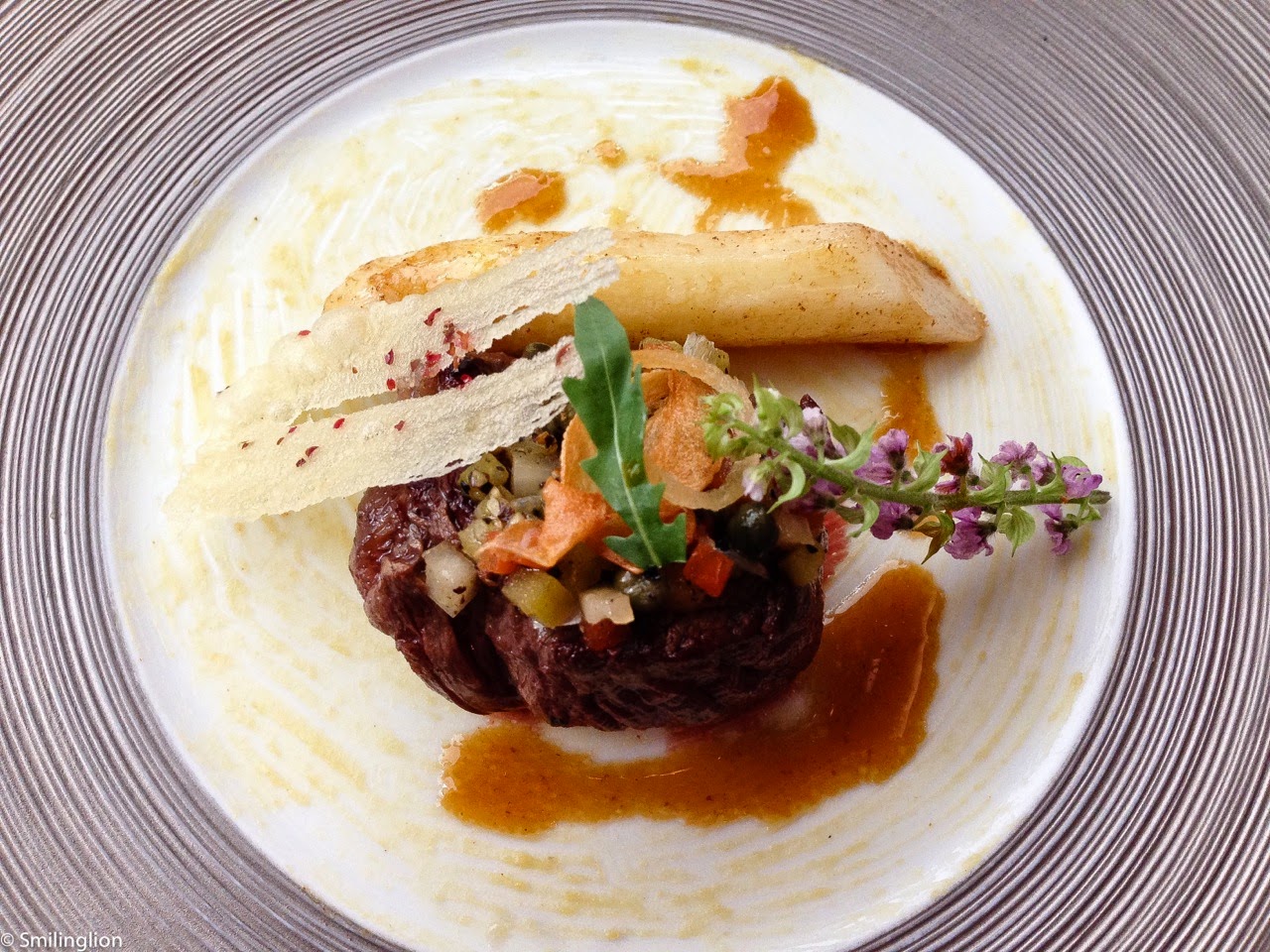 Alphonso Mango on an Almond Sable Tart served with a refreshing "Mango Lassi". 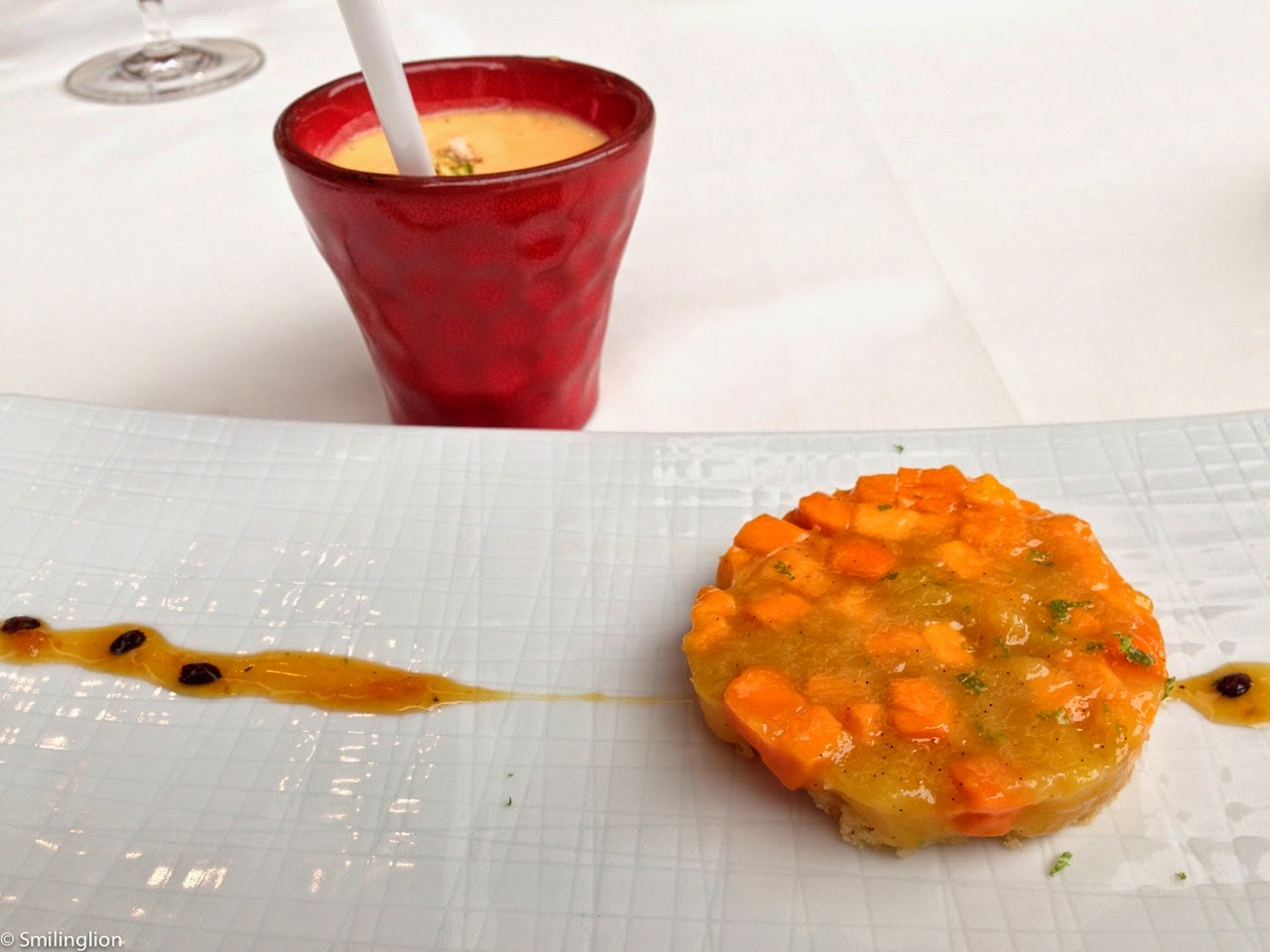 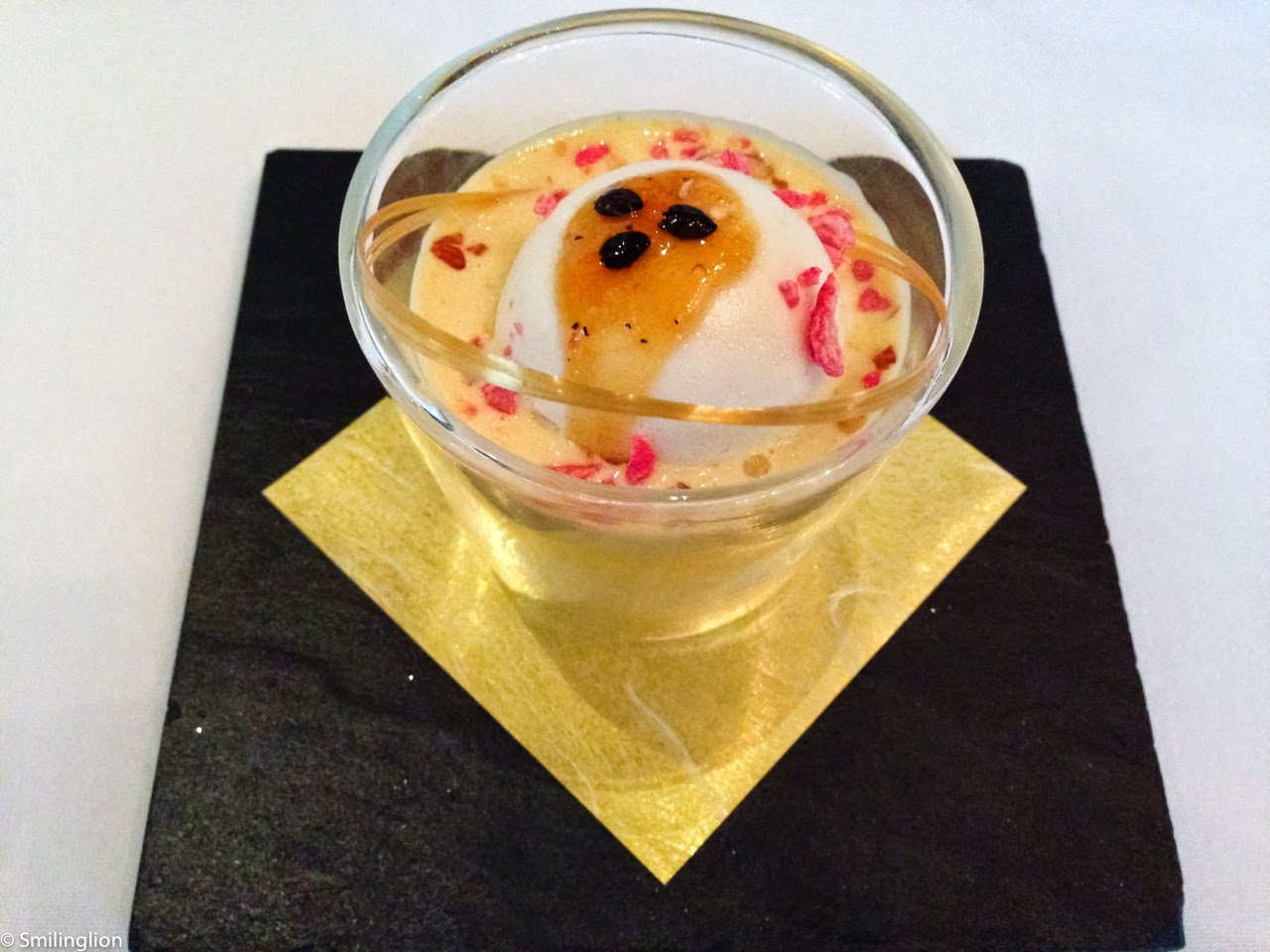 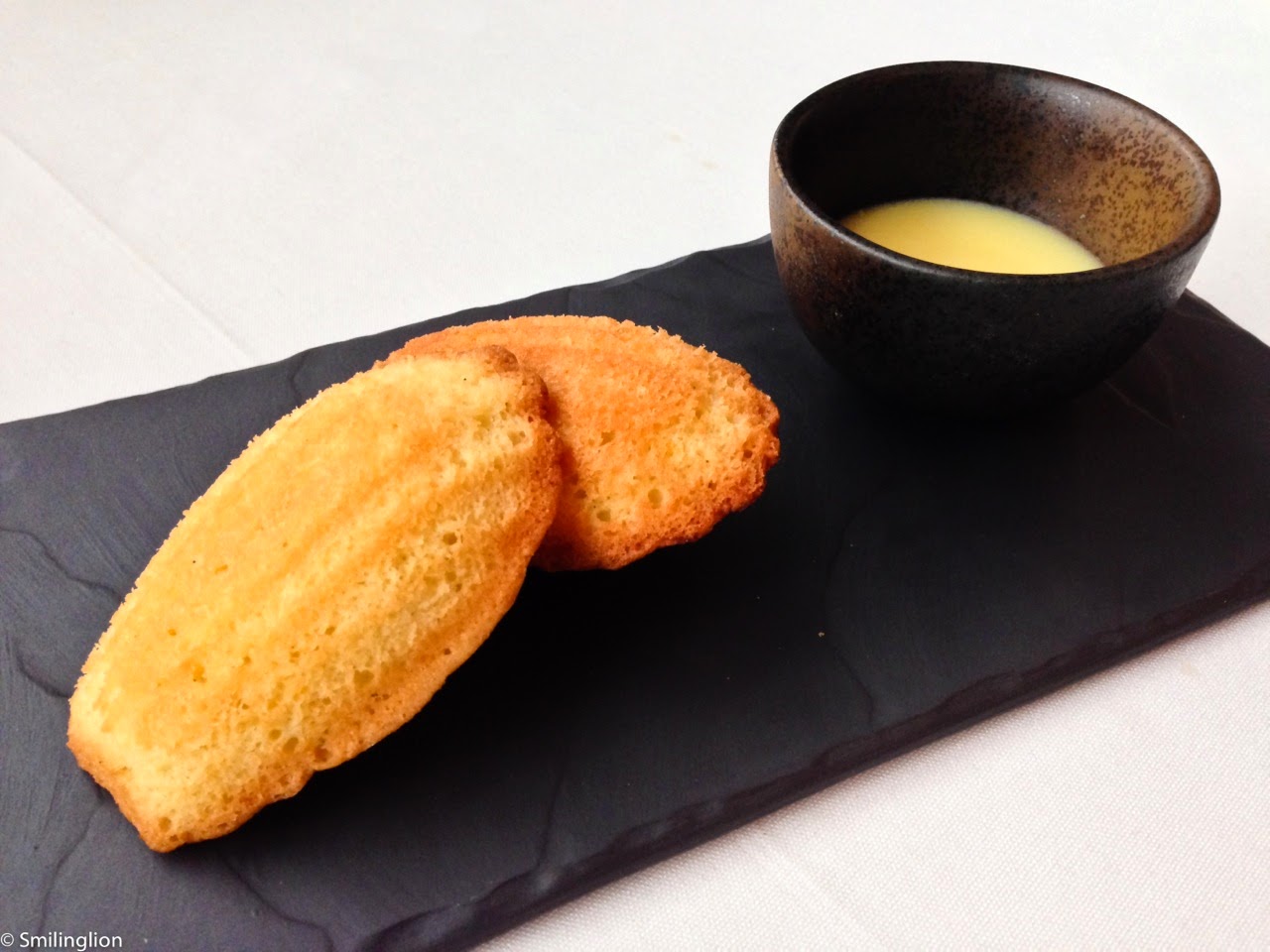