I was visiting Canada for the first time, and finding myself in Toronto for a few days, I was looking forward to having a couple of good meals there to get a sense of the Canadian food culture. Problem was, I had difficulty in my research on fine dining in Toronto; it didn't seem like a widely discussed topic online. Even my friends and colleagues living in Toronto struggled to suggest dining options outside of cafes and Asian restaurants. In the end, my best source of ideas was still chowhound.com, and from the discussions on the topic in the forums, I picked a few places to try.

One of which was Jacobs & Co Steakhouse. I reckoned that when in North America, one should try to have a steak dinner, and this I read was probably one of the best in the city. Located along the fashionable Kings Street West (the 'Fashion District' in fact), Jacobs takes up a standalone two storey building which houses a large bar and pre-dinner drinks area, and an equally spacious dining room. I deliberately booked an early dinner reservation (6pm to be exact; I was afraid my jet lag would kick in if I ate later and affect the enjoyment of my dinner), and was surprised to find that the restaurant was already half-full by then (maybe in the summer, Canadians have dinner really early).  The restaurant was very well staffed and I was very warmly welcomed and shown to my seat. I was dining alone, and conscious of that, my server spent a lot of time at my table throughout the night making conversation and generally keeping me entertained. The service that night was excellent. That might have influenced me somewhat to ambitiously order an entire bottle of wine being fully aware that there was no way I was going to finish it. However, I was looking forward to a nice juicy steak and wanted some good Californian Cabernet Sauvignon to go with it (the wines by the glass were not inspiring and they didn't have any half-bottles). At the recommendation of my server, I picked a 2009 Napa red from Othello which was relatively affordable and very enjoyable. This was accompanied by a warm onion loaf with herb butter. 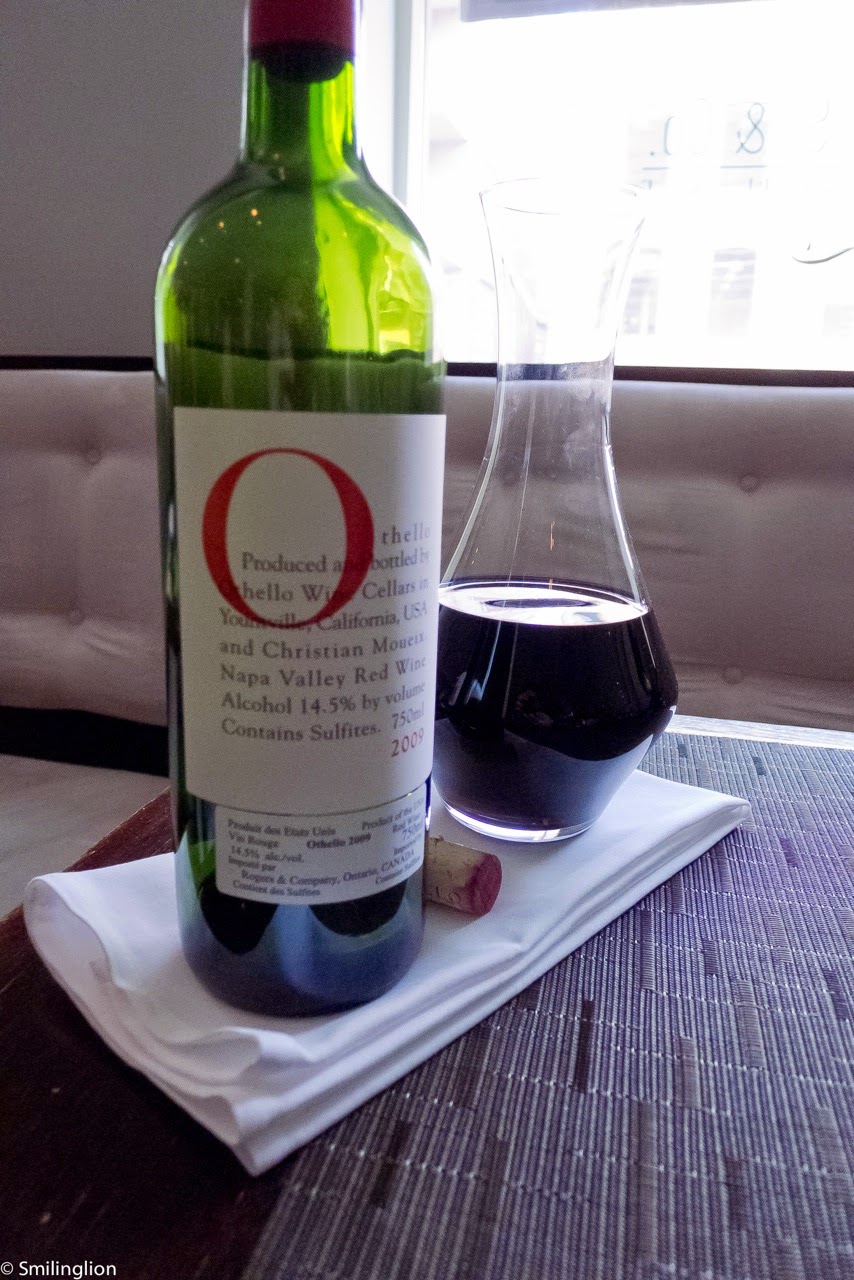 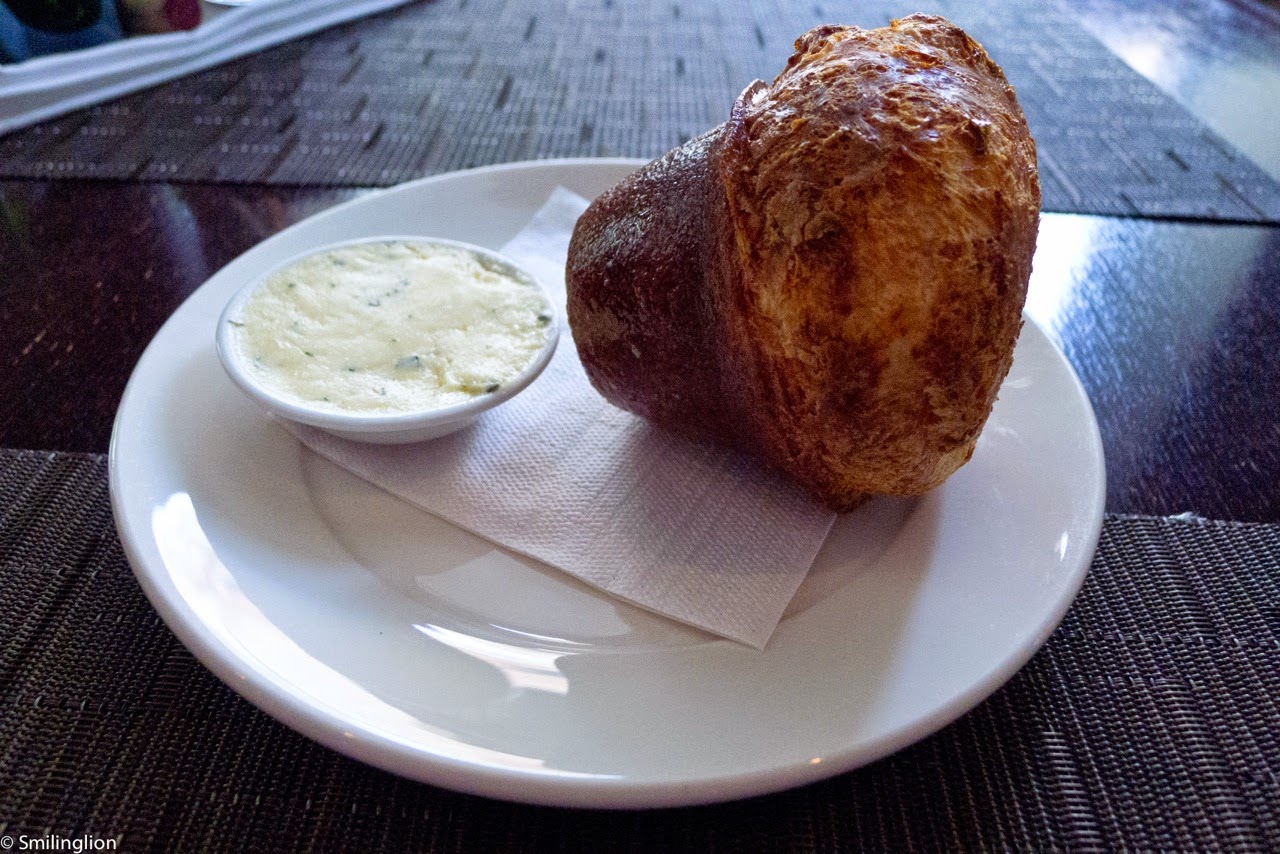 As a starter, I had a selection of Daisy Bay, Shigoku and Kusshi oysters, which were very fresh. I needed to keep the early part of my meal light so as to make space for the beef, which was the main reason I was here. 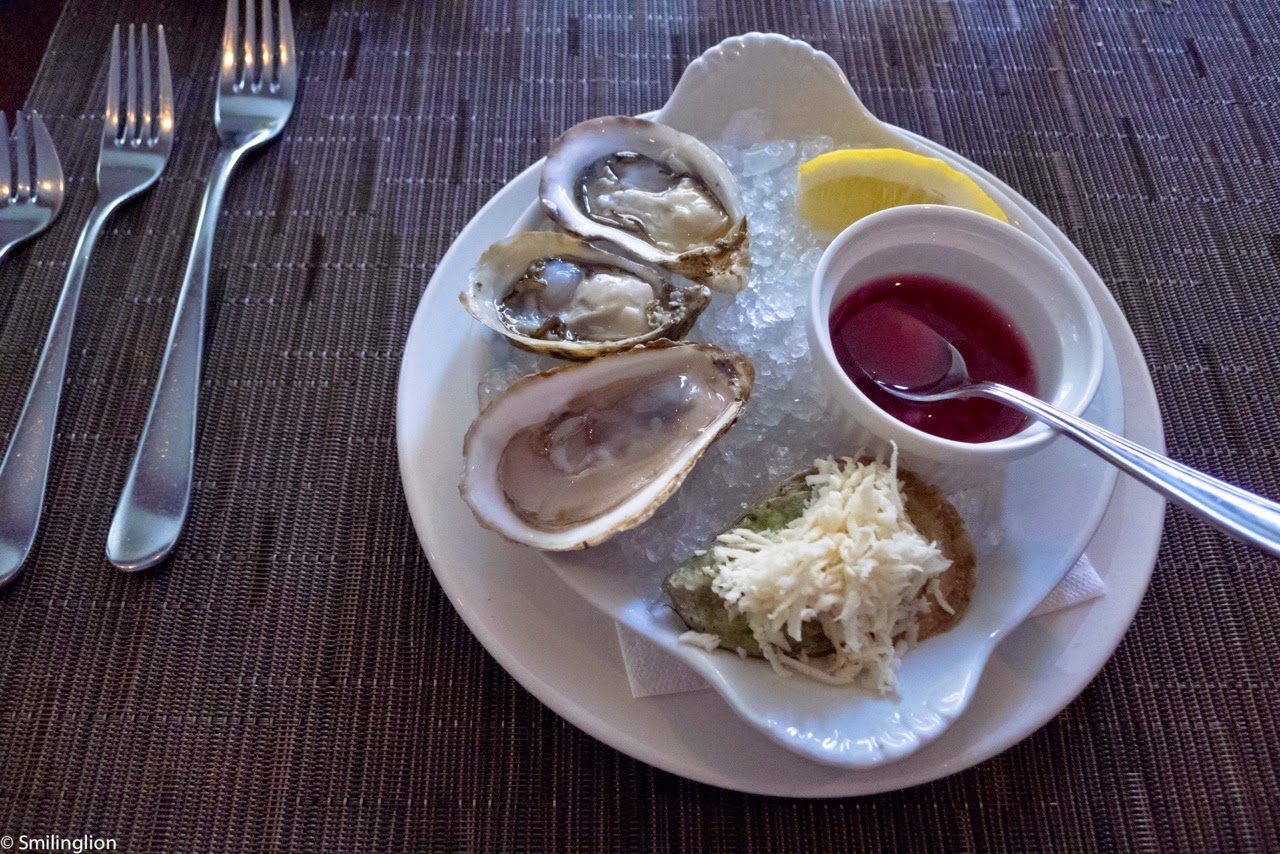 Jacobs had a very good selection of beef. They had different types of Canadian beef of different cuts, USDA prime, Snake River Farms Wagyu and Australian Wagyu. On recommendation (after a lengthy discussion with my server on the different types of beef from the various Canadian farms), I opted for the Prime Angus - P.E.I. (i.e. Prince Edwards Islands, a region in Canada renowned for hormone and antibiotic free beef from cattle responsibly and sustainably reared) 16oz striploin. 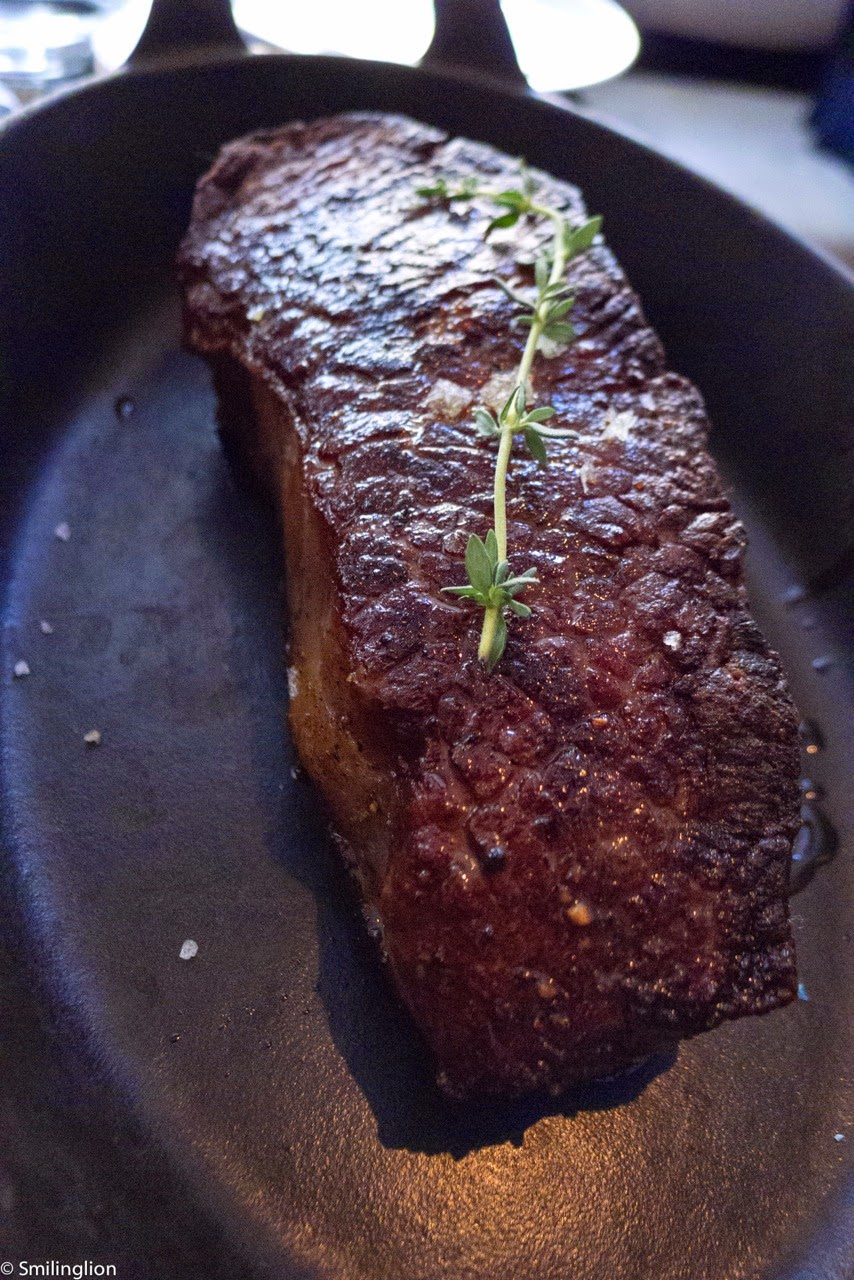 It was served just the way I like it, medium rare on a sizzling pan with no sauce or condiments except for some salt. It was as good as a steak should be; flavourful without being too fatty; firm without being too chewy. With my Napa red wine and my perfect striploin, this was truly a memorable steak dining experience. It helped that Jacobs had a very civilised ambience and the lack of the noise and boisterousness customary in other steakhouses we've been to allowed me to truly savour the meal. 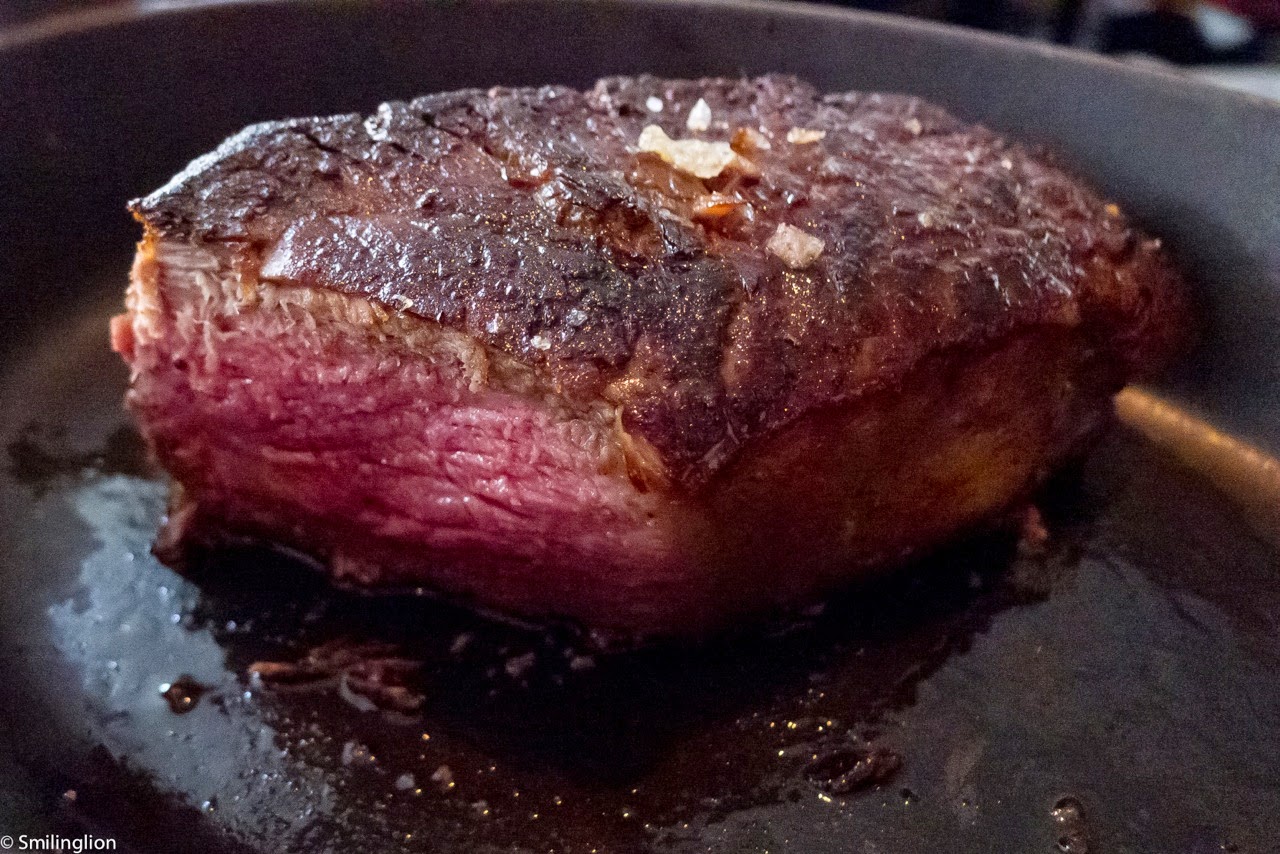 As much as I had enjoyed the dinner, I could only possibly handle a fraction of the mash potatoes (this was just a half portion). I skipped dessert as the 16oz steak, a bottle of wine and jet lag conspired to end my dinner early. This was one of the best steak meals I have had in a while and the experience was made even better by the superlative service and attention I got that night. 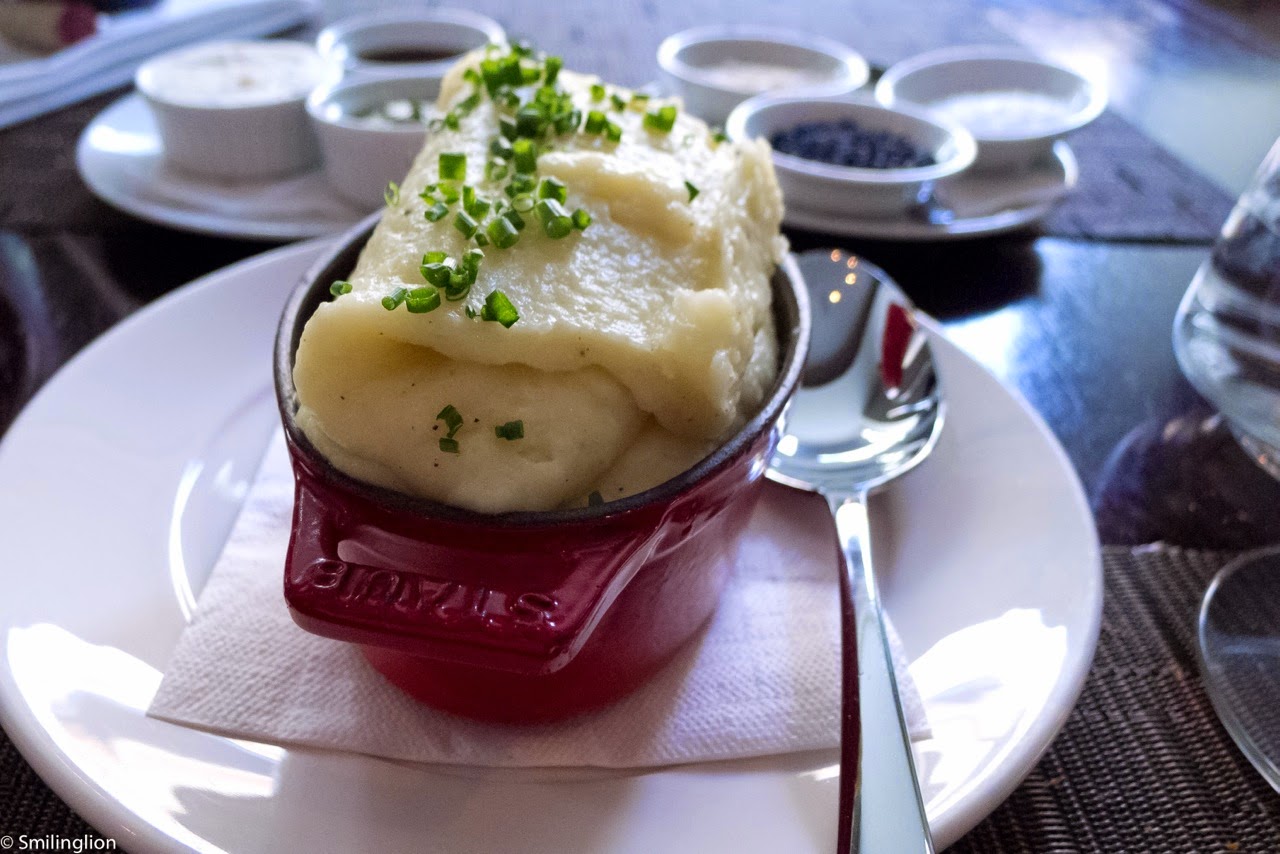