The Square is a modern French restaurant located off the upmarket New Bond Street which for a very long time has held on to two Michelin stars. It belongs to the same stable of restaurants which includes The Ledbury, a fellow double-starred restaurant but one which has garnered much more international acclaim, no doubt in a large part due to its mention in San Pellegrino's The World's 50 Best Restaurants list (it sits in 10th position this year). Nonetheless, The Square (despite its relative anonymity) always has the reputation of being one of the finest restaurants in London and is a favourite of many of our friends who know the London scene well.

Located along the main road and just next to a traditional British pub which is more symbolic of British culinary traditions (till recent years of course), The Square opens up into a predictably square dining room. In the few times we've been there, the crowd had always been quite formal and business-like, and the rather spacious table alignments creates the sense of discretion which perhaps makes it an ideal location to hold confidential business discussions over a meal. Despite the current trend towards informality in some of London's newer and hip restaurants, eating here still feels like a serious affair and the waiters are decked out in crisp suits and have an appropriately snooty demeanour while providing the most professional of service. This place evokes memories of the pre-Lehman banking boom years when it would be customary to find City bankers in their three-piece Saville Row suits sipping their champagnes and discussing the new models of Aston Martins they intend to buy with their next bonus. The same discussions are probably still taking place nowadays, except the players now are more likely to be Russian oligarchs or Chinese industrialists. 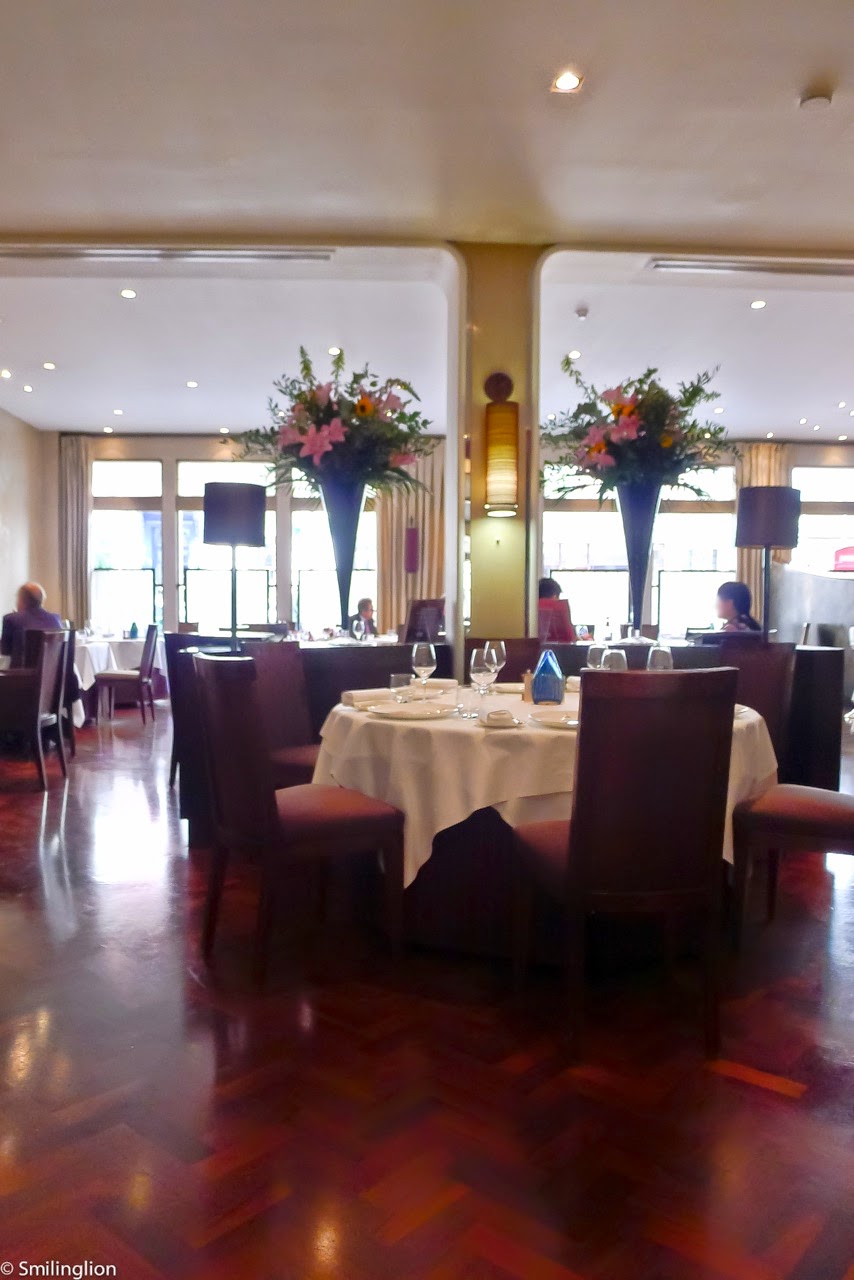 I was here on a work day lunch, hence it was inadvisable for me to go on a bender and have champagne and the customary full bottle of wine. This did not prevent us from having a proper drink, as the rather comprehensive wine list included a very decent half bottle Gevrey Chambertin which was very enjoyable. 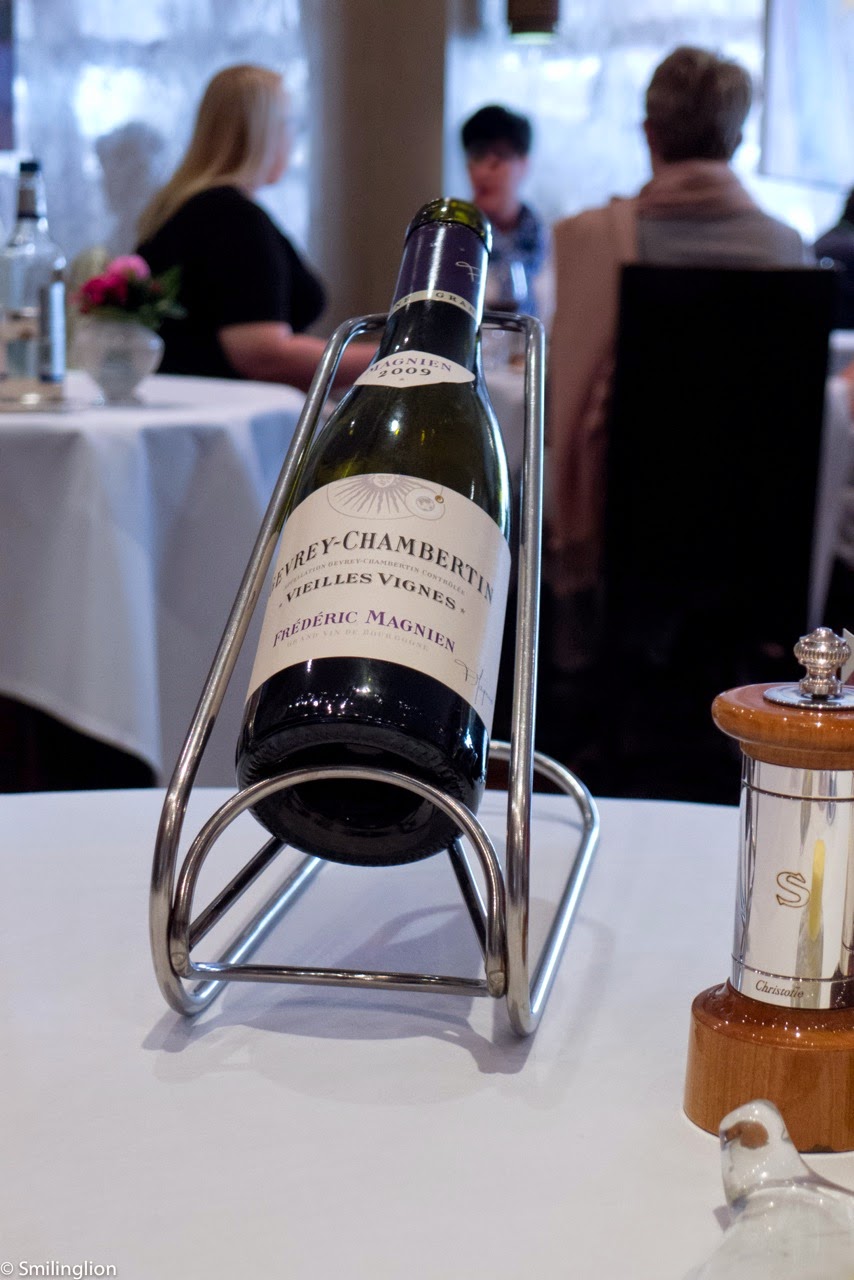 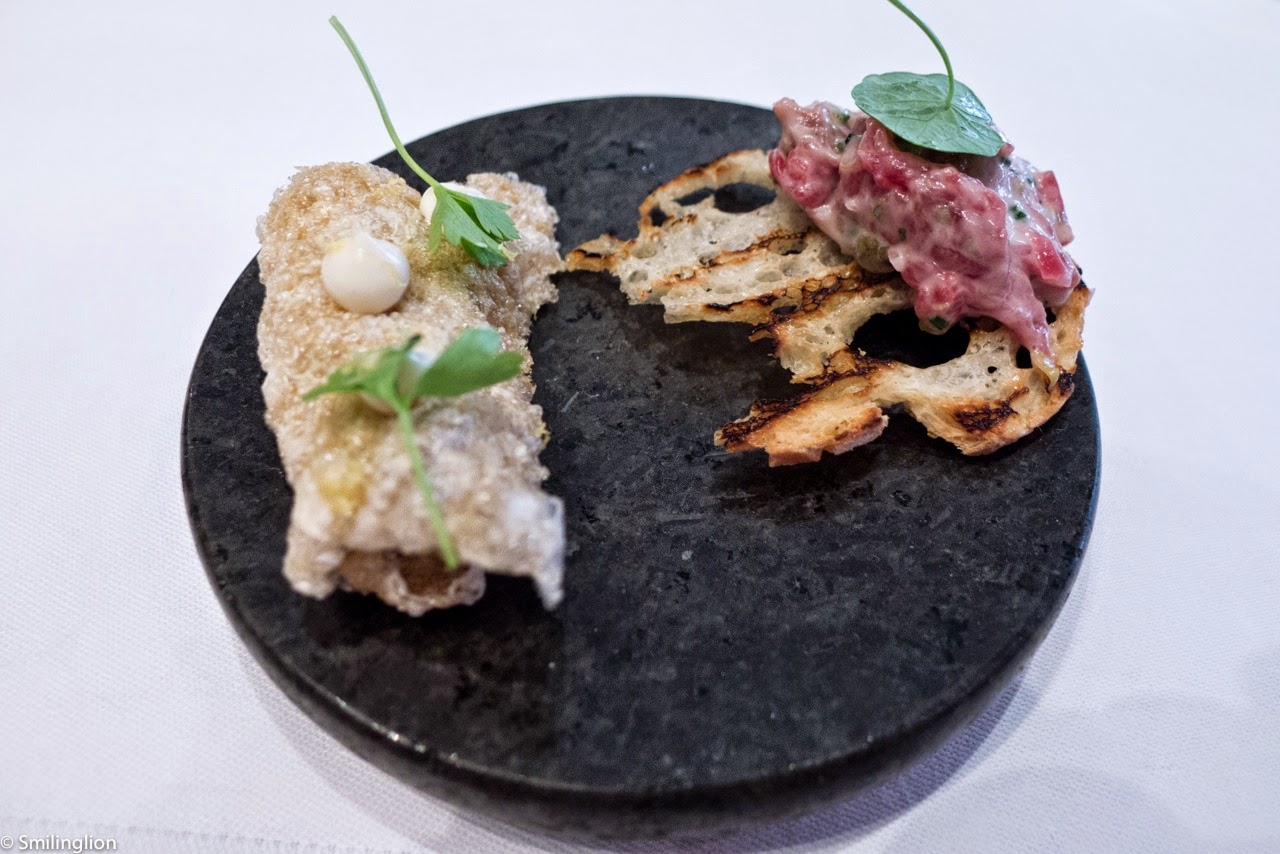 My starter was the salad of cooked and raw spring vegetables with Montgomery cheddar "fondue", crisp quail egg, shoots and flowers. This was very well put together and highly enjoyable, with the cheese fondue (which had a tinge of turmeric flavour) particularly memorable. 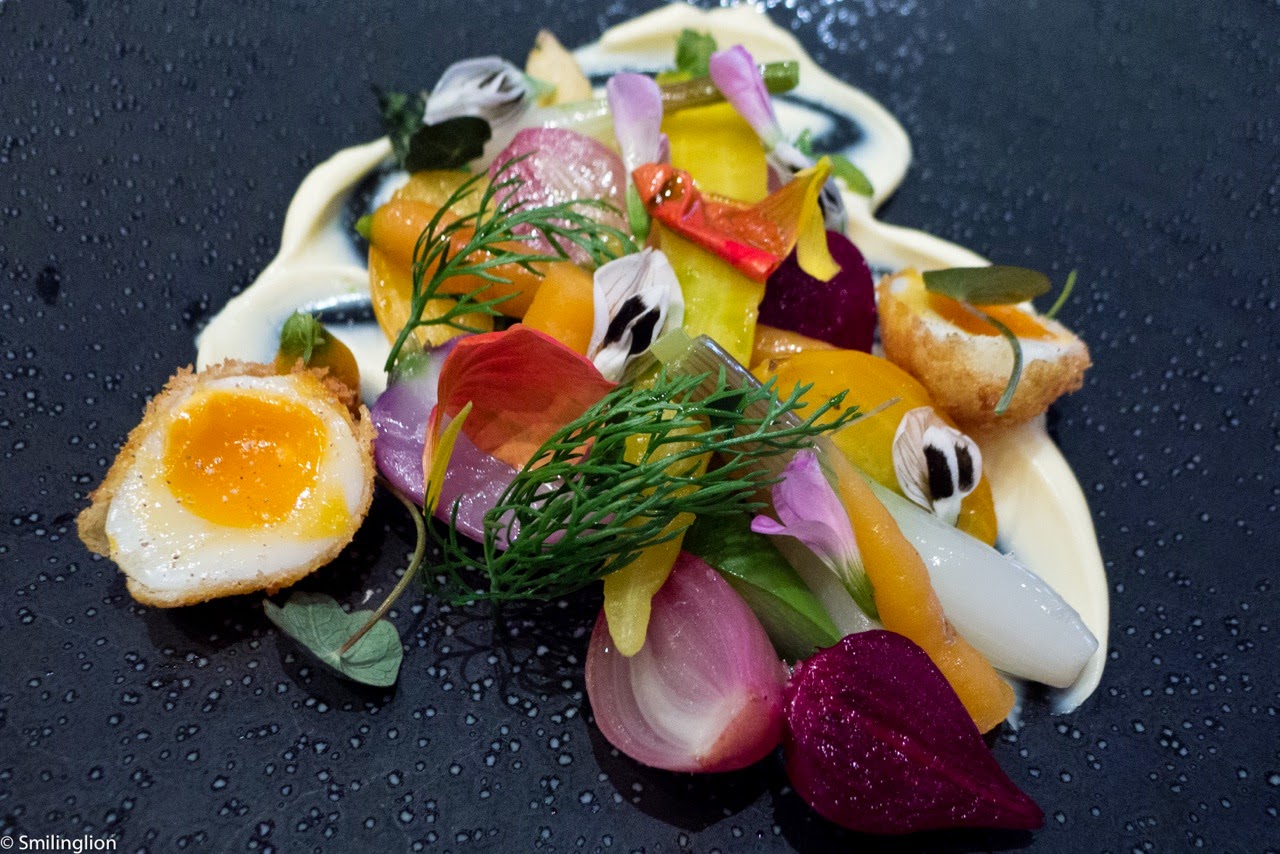 The slow-cooked fillet of turbot with crushed Jersey Royals, pickled celery, mussels and cider was unexpected. Firstly, the fillet was cooked to a lesser degree of doneness which I was used to, and hence did not have the firmness I expected from a turbot dish. However, in this case, it really worked against the backdrop of the mussels and heavy-flavoured mussel/cider sauce. It was as if the main character of the dish wasn't the fish, but instead the fish was a base on which the mussels were able to express themselves. I thought it very impressive. 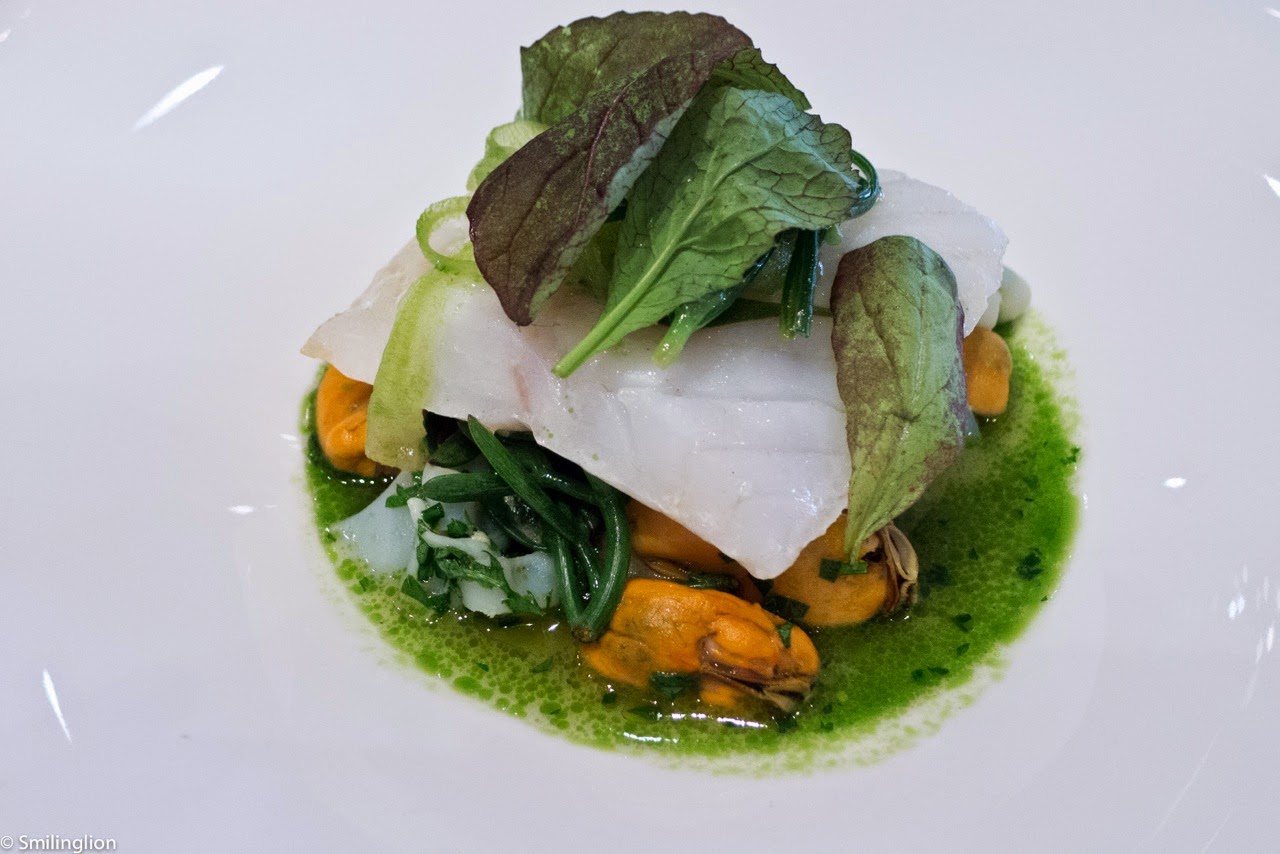 To finish up the wine, a small selection of some of our favourite cheeses were picked from a decent spread on the cheese trolley. 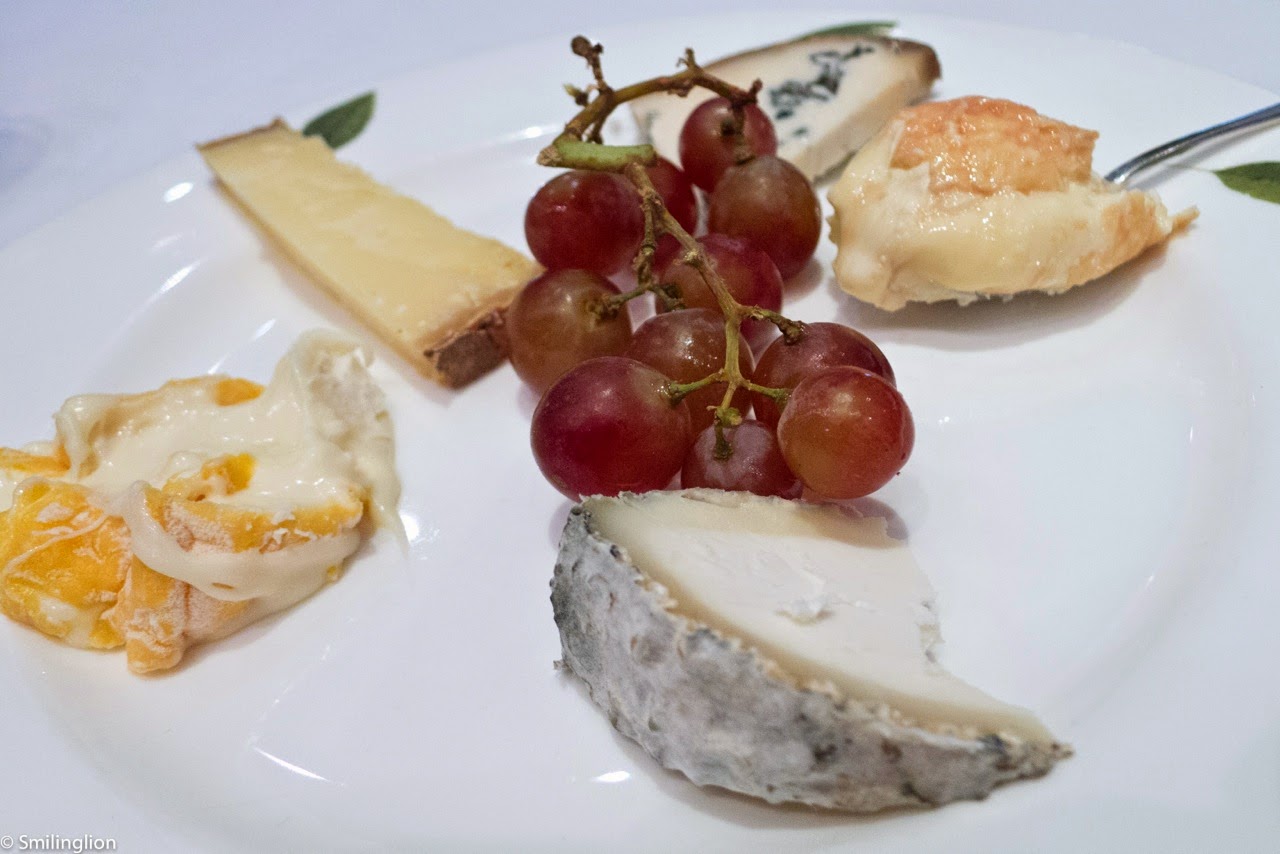 We finished off our very satisfying lunch by luxuriating on the very rich dessert of milk chocolate bar with salted peanuts, praline and banana, and proceeded to polish off the mignardises as well. 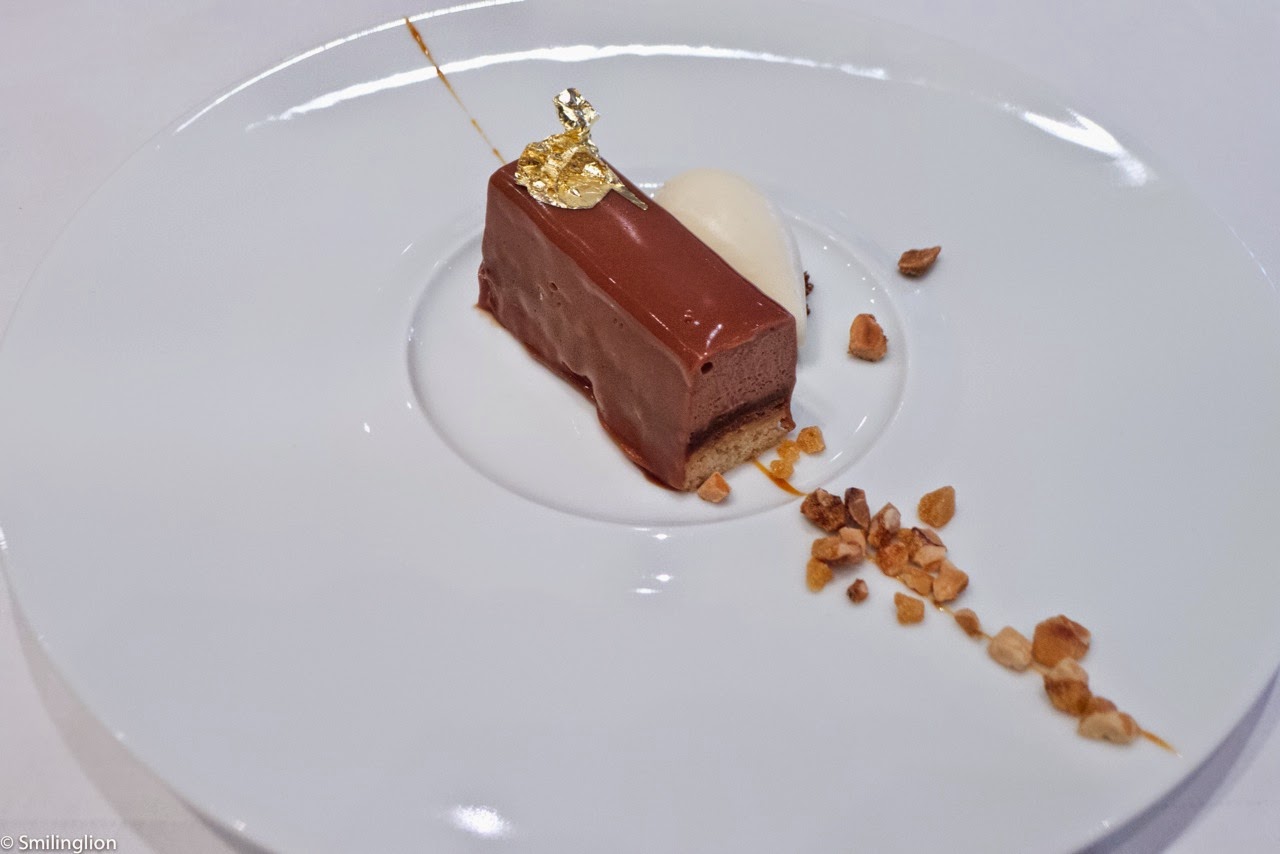 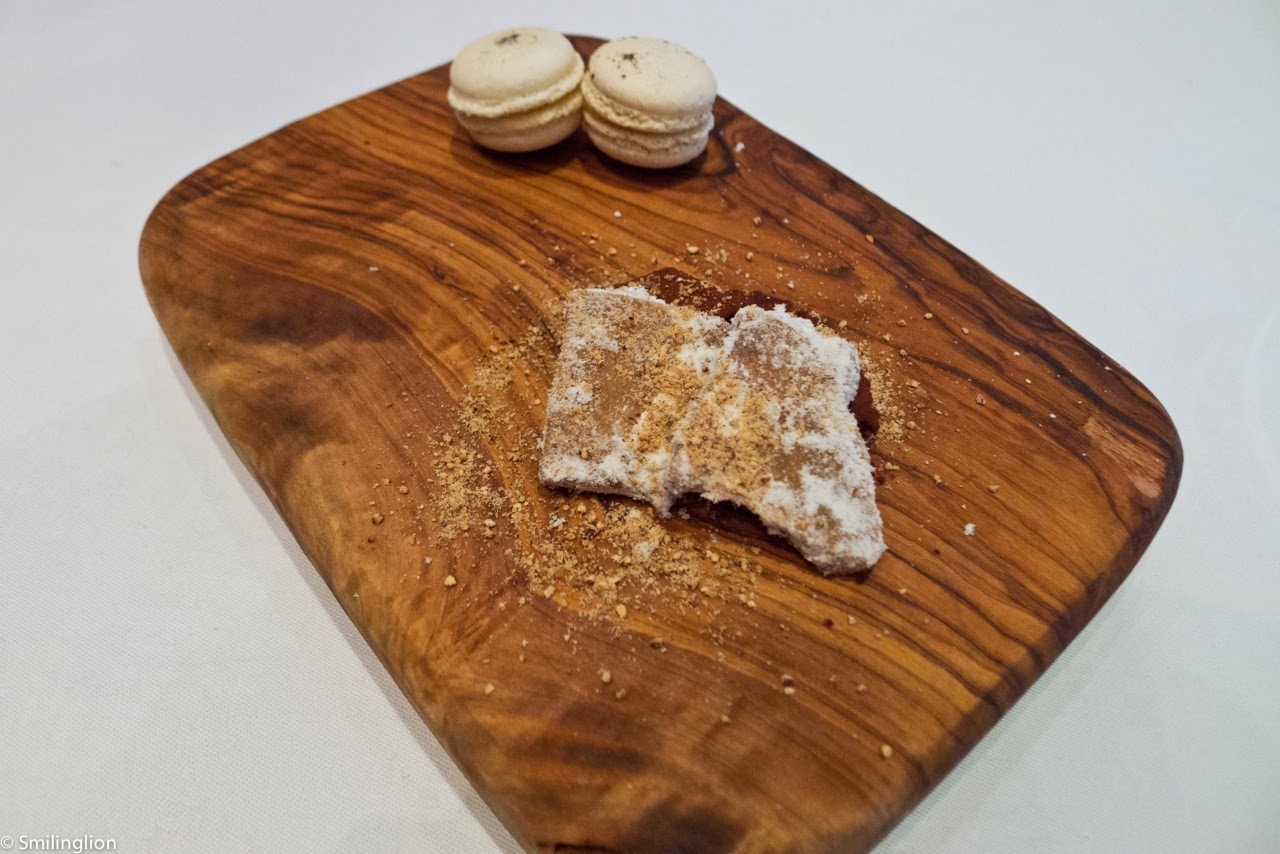