Tucked in a very quiet and secluded part of South France, is a tiny hamlet of Fontjoncouse. No one would ever think of going there except to visit the highly regarded three Michelin Starred restaurant of Chef Gilles Goujon. We drove over an hour from Carcassonne for lunch there, though a mix of motorways and small country roads, across farmland and craggy and rocky mountains alike, which was scenery typical to the Aude at the base of the Pyrenees Mountains. The restaurant is part of a property which has accommodation as well, and is located over a several old wells (hence the name L'Auberge du Vieux Puits which is translated as 'the inn of the old wells'). The floor of the reception area of the restaurant has a glass cover over the opening of one of these wells, but other than that, there was no additional significance of the wells which was of any real interest to us. There was an outdoor patio overlooking the carpark which was a pleasant area to start the meal with an aperitif or to end one with a digestif. 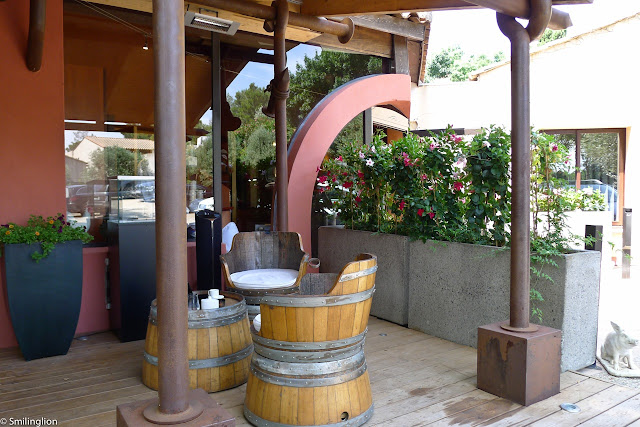 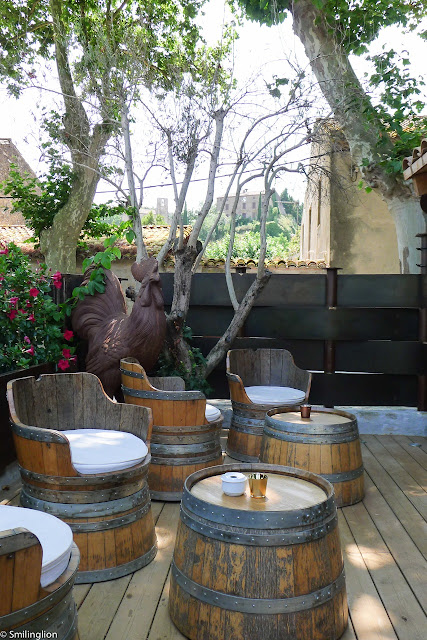 We were initially seated at the reception area and served some amuse bouche, where they also gave us the menu and wine list. The amuse bouche was good, but I thought it was a bit awkward for us to eat and enjoy it while seated on the sofa with a giant leather-bound wine list on my lap. 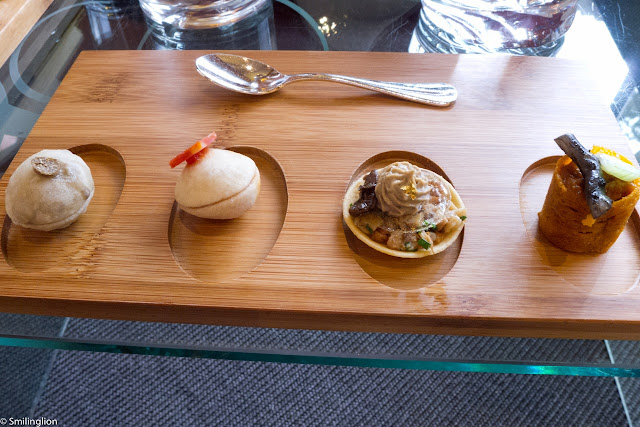 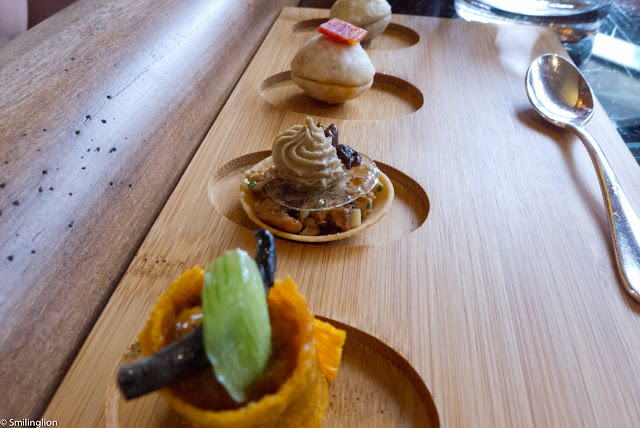 Shortly thereafter we were shepherded to the dining room, which was quite large and roomy, and despite the isolation of the area, it was quite full (two-thirds full) that Friday lunchtime. 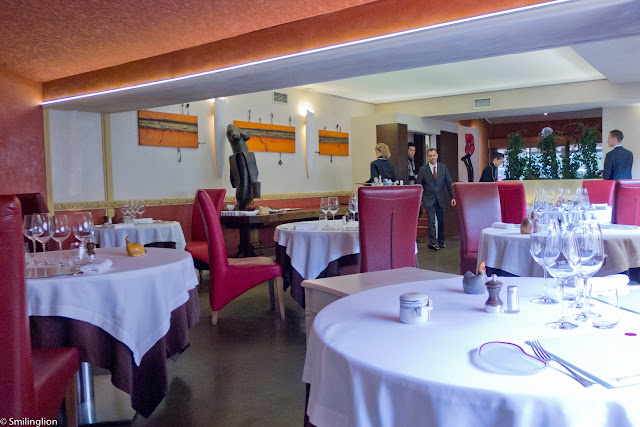 The waiters were initially stiff and stuffy when we first arrived, but warmed up slowly as the afternoon progressed and ended up making conversation with us throughout the meal. But in comparison to the zest and youthful enthusiasm of the staff at Franck Putelat where we had our meal the previous day, the waiters here were more uppity.

We liked the simplicity of the menu. It was a limited choice of appetisers, main courses and dessert and hence made it easy for us to order. As we sat down comfortably at our large and spacious table, our meal commenced with a clear tomato gazpacho with mozzarella, was quite brilliant with its perfectly balanced flavours. 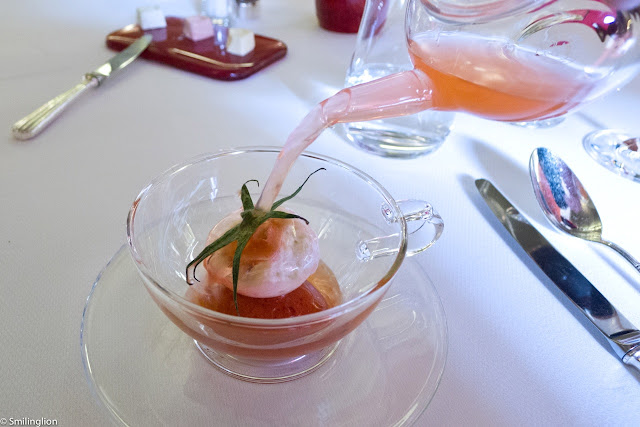 L'oeuf poule Carrus "pourri" de soleil sur une puree de chichoumey, sabayon de lard fume, briochine de pomme d'amour et cappuccino a boire (Local chicken egg on a chichoumey puree, smoked bacon sabayon, apple briochine and cappuccino drink): This was probably the best egg dish I have ever eaten. The egg, which the waiter very proudly informed me was laid in the vicinity, had such a creamy and rich yolk and this was matched perfectly with the bacon cream. The accompanying brioche was very handy to mop up the remnants of the sauce. 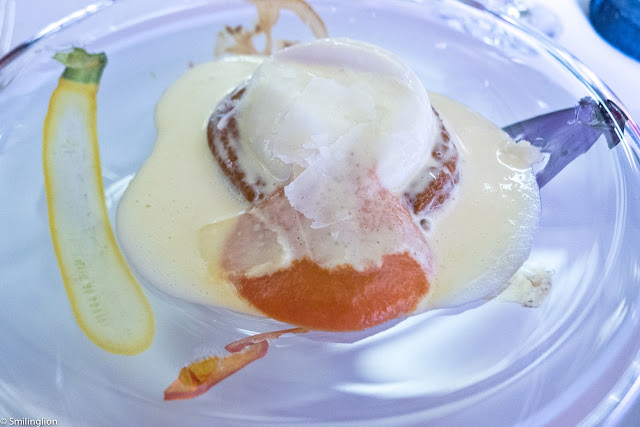 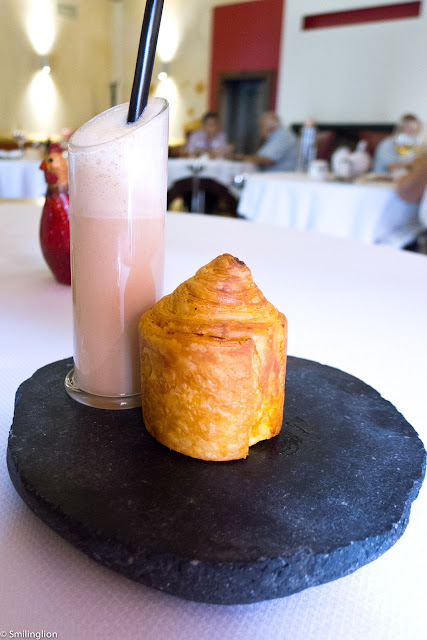 Gambas de Palamos juste raidie sur un crumble de tomate Marmande, vinaigrette d'herbettes a l'huile d'olive et citron confit (Palamos prawn with stiffened tomato crumble, herb vinaigrette, olive oil and lemon confit): My wife had the other signature dish. It was good, but she was disappointed because it was no match for the Denia prawn we had at Quique Dacosta a week before. Also the vinaigrette made the dish too acidic which detracted from the umami goodness of the prawn. The accompanying prawn broth and tomato popsicle were also good but she regretted not ordering the egg dish which I was having. 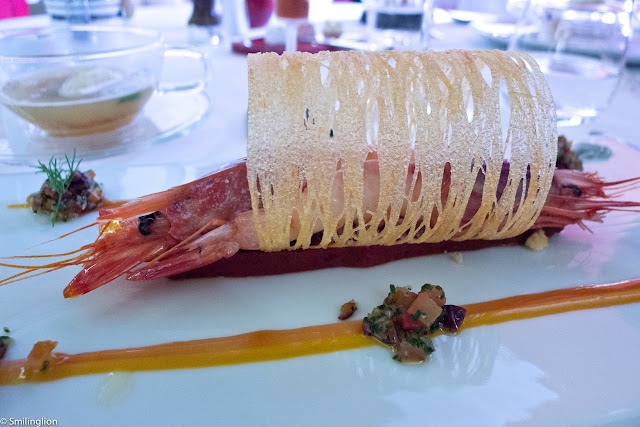 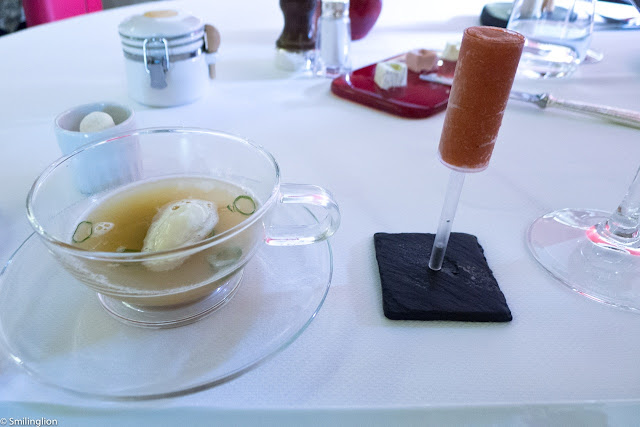 Emince de Boeuf de Baraqueville mature, cuit "Josper", trinchat de legumes "pot au feu" a la moelle, une chartreuse de gardianne aux olives taggiasche (Sliced aged Baraqueville beef grilled in Josper Grill, trinchat of vegetable stew stuffed with bone marrow, with sauce of chartreusse de gardianne and taggiasche olives): We both opted for the beef, which was also excellent. The sauce was to die for, and reminded us why French fine cuisine still occupies such a special place in our hearts over every other European cuisine. 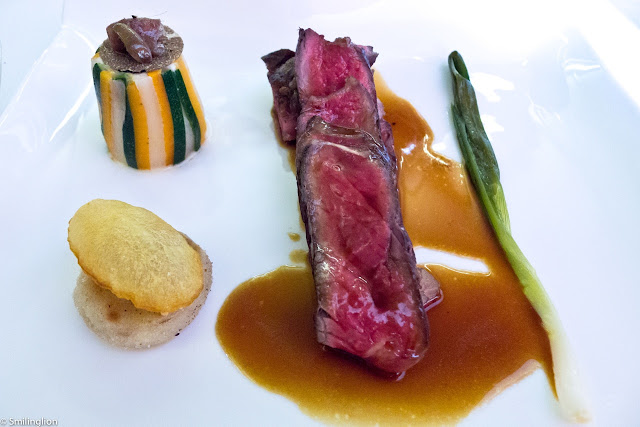 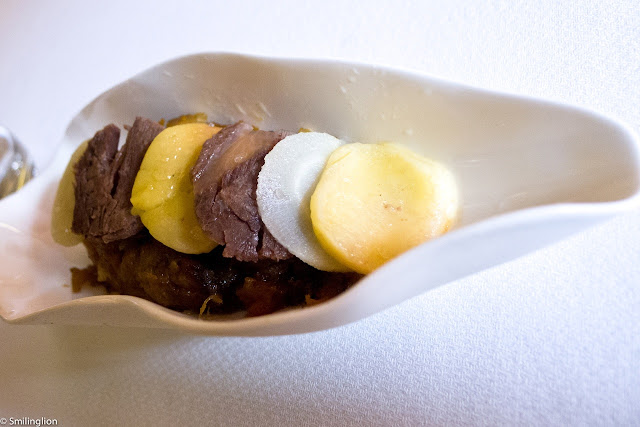 The waiter was very proud of his selection of local (i.e. from the region) cheeses. These were very unfamiliar to us (they didn't have our usual favourite French cheeses) and consisted mostly of goat and hard cheeses. They went down very well with our bottle of the local Languedoc claret. 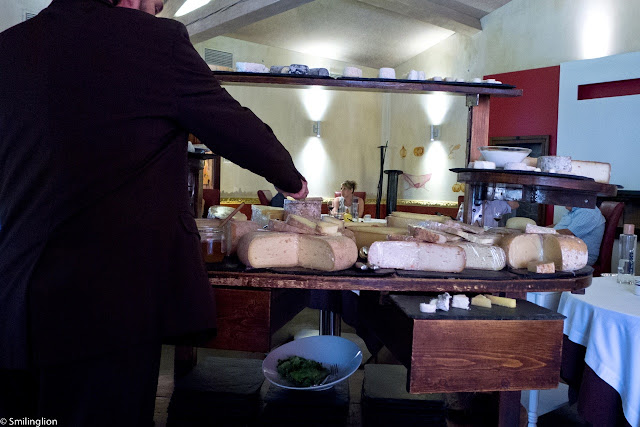 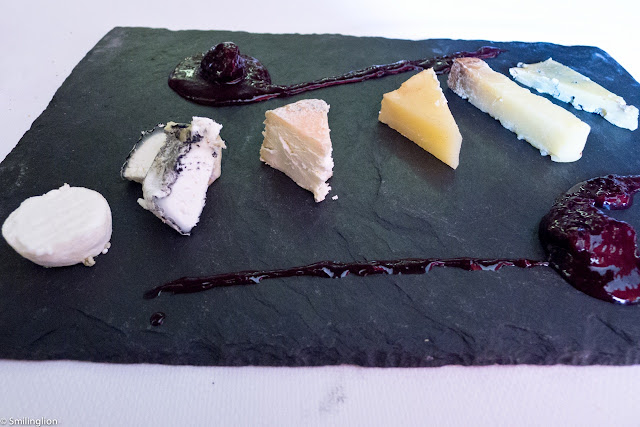 Fausse cerise finement cassante, sorbet noyau, tiramisu mascarpone a la pistache sur un clafoutis sable et jus de melasse a la verveine ("Cherry" with brittle core with pistachio tiramisu inside, on a bed of baked cherry clafoutis): Desserts were next and they too impressed us. This was a very interesting twist to the usual tiramisu, with the cream inside the brittle sugar covering and the crust sitting right below the apple-shaped 'cherry'. 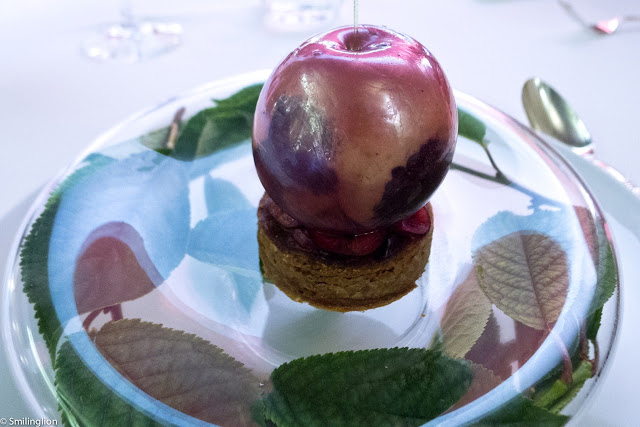 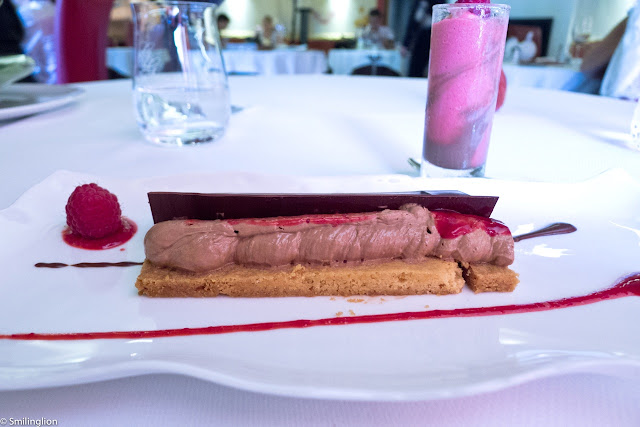 Unlike other top French restaurants we have eaten at, this one didn't overload us with a trolley-load of sweets and mignardises. The meal ended with some very nice canales and chocolates. 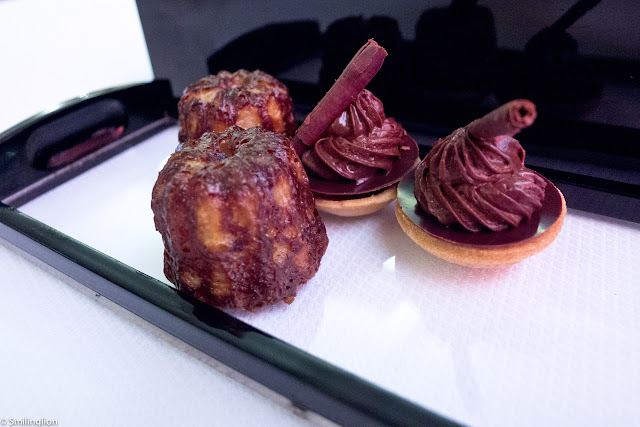 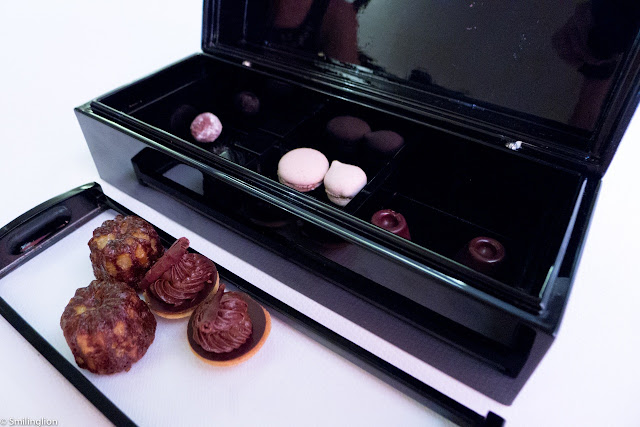 Final Thoughts: We ended our lunch in the patio outside, slowly sipping our wine and enjoying our sweets and coffee. Chef Gilles came out to introduce himself to us and chatted with us for a bit. He came across as a very passionate yet humble and approachable person. Our meal here was an unusual one for a French three Michelin starred restaurant. For once we did not feel like we were going to explode. The menu was short and each course was very well executed, and the kitchen did not feel like it needed to show off too much by trying too many fancy things or overloading us with food. The meal was reasonably priced for the category of restaurant and if not for the relative isolation of the location of this place, the egg dish alone would bring us back here again soon.
Posted by Smiling Lion