Usually, we don't visit wet markets at home or when we travel, but in Barcelona, the La Boqueria market is a must visit. Along the famous La Rambla street, it is a busy and sometimes chaotic place, with shoppers milling around and shopkeepers moving their cargo (sometimes wet and squishy raw meats or seafood) along the narrow pathways. Meats, seafood, fruits and flowers, this market has everything. This is also the famous market where many chefs, including those from famous restaurants in the city, come to shop for their fresh produce in the morning. And these chefs, when they come to do their marketing, often eat at either of the two tapas restaurants located in the La Boqueria. Of the two, Pinotxo is older and more established, but El Quim has over the years garnered much loyal support as well. El Quim is named after the owner, Quim Duran, and it is not uncommon to see him behind the counter manning the kitchen or chatting with the diners (he is the one who looks like Andre Agassi). 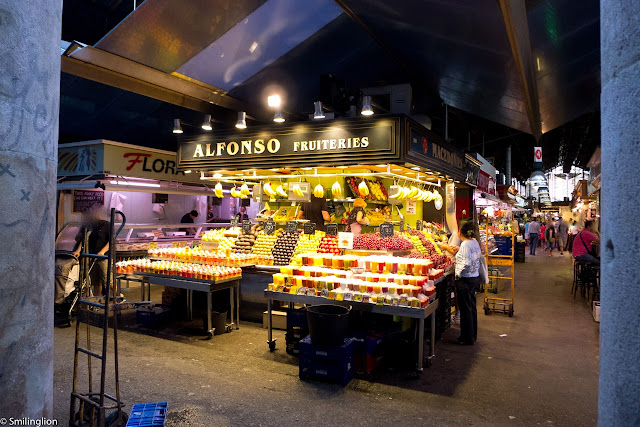 We tried both. Pinotxo (for which we have no photos) is more traditional and it seemed harder for a non-Spanish speaker like myself to order since they didn't seem to have an English menu. Therefore at Pinotxo we had to simply order what the specials of the house were, and in the case when we were there, this was the usual Catalan favourite dish of tripe. El Quim is more tourist friendly, as they have menus in English, Japanese and Chinese as well. 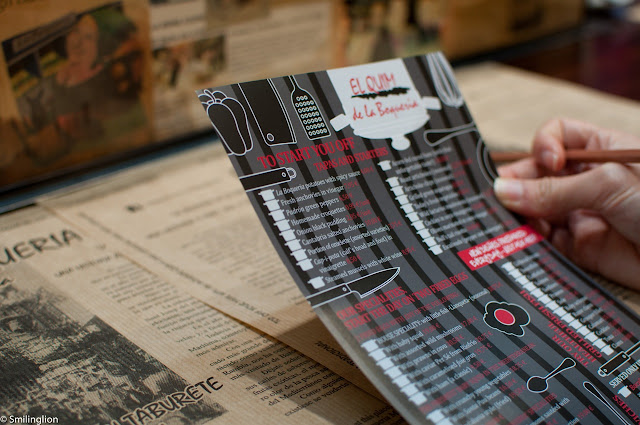 El Quim is set somewhat in the middle of the market, and is a small stall with perhaps 12-14 seats around a bar counter. Not more than 4 guys (but usually only 2 are cooking) are manning the kitchen at any point in time, which always makes us wonder how they can prepare so many different dishes for so many people at one go. 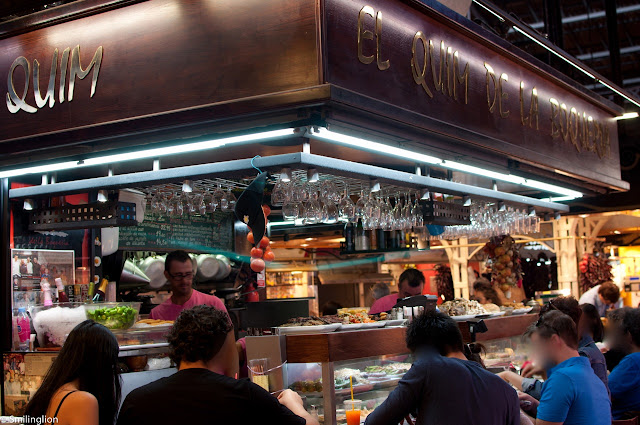 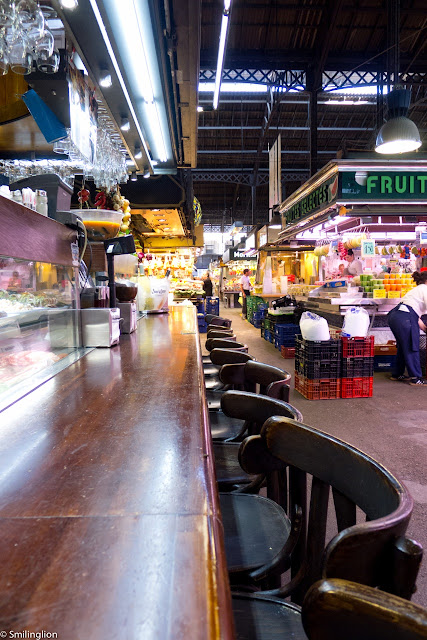 The dining experience in El Quim (and as the case may be for Pinotxo as well) reminded us somewhat of eating at a hawker centre in Singapore, where food is cooked by sweaty men in a quick and often rather unhealthy manner (what with the uninhibited use of oil and salt), and served very casually at the bar where one is expected to eat quickly and give up the seat to the next hungry person. 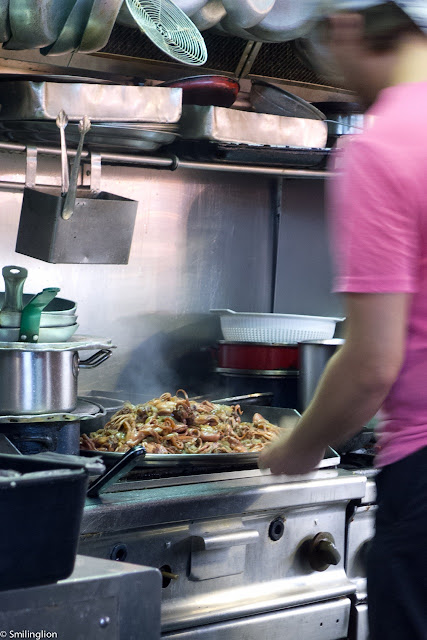 The one thing we learnt eating at El Quim (twice) is that despite being a 'tapas' bar, their food is not served in tapas portions but are usually huge. For two people, it is advisable to start with 2 dishes and work yourselves from there. We made the mistake of ordering three and had trouble finishing them. It is not difficult to order from the menu, almost everything there is good (as most of it is fried or deep-fried).   This time we ordered the squid, the fried anchovies and the patatas bravas with spicy sauce, which were all very good. 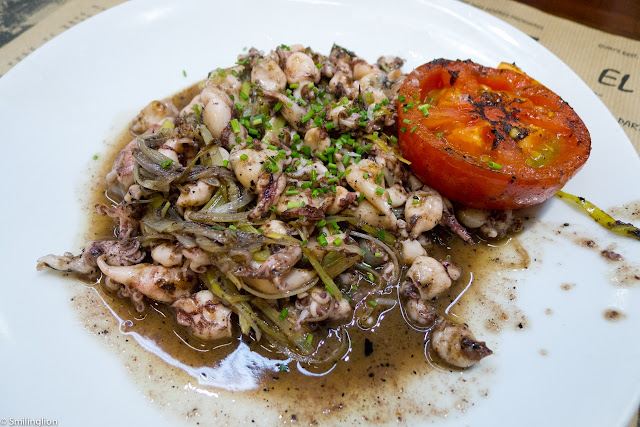 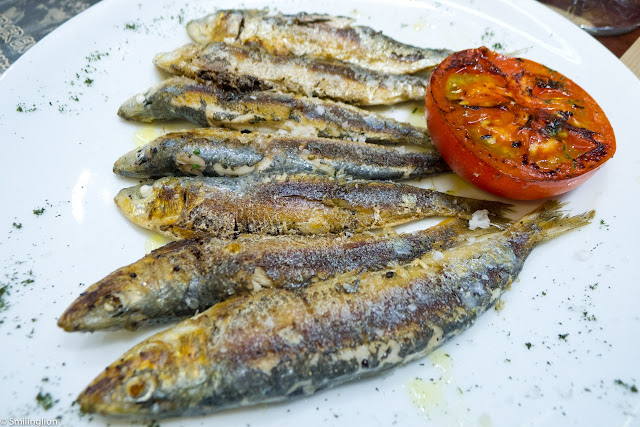 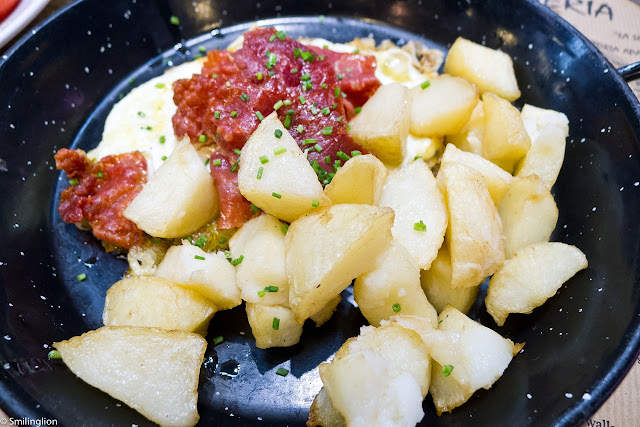 We polished off the meal with a Catalan cheesecake, which is similar to a normal cheesecake except that the cheese is much lighter, much like ricotta cheese. And all these were just for breakfast. 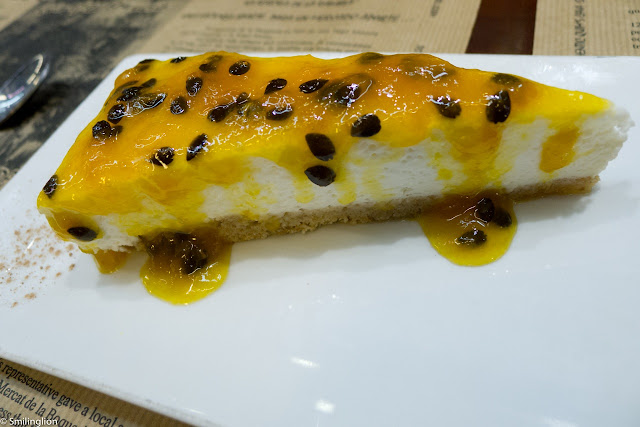 The first time we visited El Quim was last year. Without the benefit of hindsight (which we had the second time we went there), we went there to eat our third breakfast of the day (before we got there, we had eaten at Tapas 24 and Pinotxo, and it was barely 1030am when we sat down at El Quim).

The deep-fried artichokes was the shop speciality and they were quite magnificent. Still piping hot from the frier, they were crispy on the outside and juicy and sweet when bitten into. It was quite a large portion though, and we had trouble making a dent in it despite it being delicious. 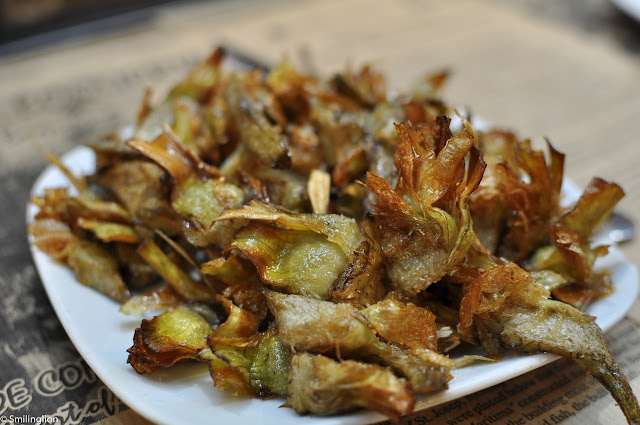 The shock of the portion sizes continued with the unusually gigantic 'baby' squids (which were at least 5 inches in length). Again, delicious. 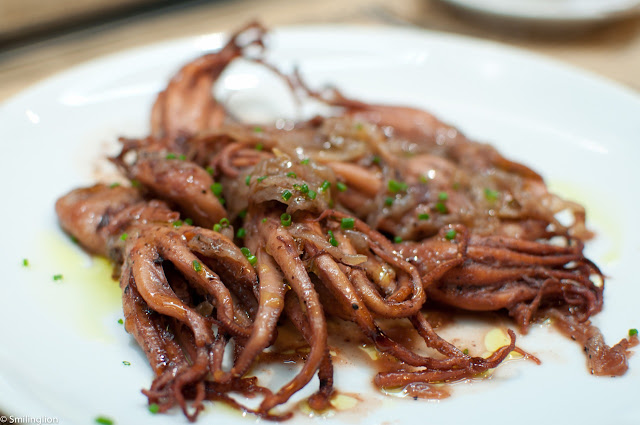 Finally, we ended off with the decadent and heart-clogging foie gras burger (but without the bun), which was dripping in fat, grease and flavour. 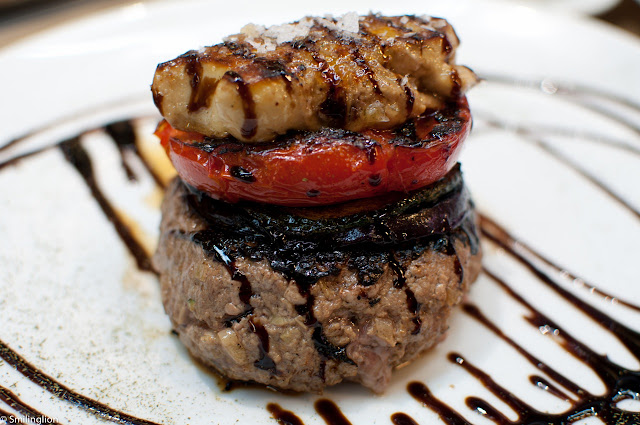 In 2012, maybe because we were one year younger, though we struggled, we still managed to get through most of the above meal, being the third meal of the day (it was barely after 11am when we finished). After that we still had lunch at ABAC and dinner at Tickets. In 2013, we found it much more difficult to eat all that and had to pace ourselves for the rest of the day.

Final Thoughts: For heart-clogging, greasy and messy, yet highly satisfying Spanish tapas (in specie but not in portion size), El Quim is highly recommended. For a casual marketplace tapas bar, the prices were rather high though, and this may have been keeping the locals away, because the last time we were there the entire bar counter was taken by (Asian) tourists only (the legend of El Quim has certainly spread to the Far East).
Posted by Smiling Lion