We found Caro Hotel (Palacio Marquis de Caro) in Valencia as one of the most interesting hotels we have stayed in. It is a very new hotel in a city which has a dearth of new luxury accommodations, and has probably one of the best locations of any hotel in Valencia. It is at the end of a narrow road just metres from the landmark Valencia Cathedral (which incidentally also houses in its museum what is widely regarded as the authentic holy grail, i.e. the cup from which Jesus drank at the last supper), and is an ideal starting point for any walking tour of the city either southwest across the old town towards Mercat Central, south towards Mercat Colon or northeast towards Jardin del Turia and Jardins del Real.

What is unique about Caro Hotel is that it isn't just another boutique luxury hotel. Instead, it has a history which stretches back almost 2000 years. It was opened in 2012 after seven years of renovation and restoration, during which time, painstaking efforts were taken to restore and to incorporate into the modern aesthetics of the design of the hotel, various archeological finds on the grounds of the hotel. These include two-millenium-old Roman structural columns and other pieces (including mosaic tiles) found intact (and some of which belonged to the Roman circus in Valencia), part of the city boundary wall built during the Arabic/Moorish occupation of the city as well as the relatively more recent arches from the Gothic palace built on this site. In fact, these priceless finds have been seamlessly incorporated into the new chic and minimalist modern design of the common areas, the restaurant and even in some of the rooms. Writeups on the history of the place, as well as samples of some of the mosaic tiles and stone and brick pieces (together with written and video-rendered descriptions), can be found mounted on the walls throughout the common areas, making lodging here feel somewhat like living in a museum. 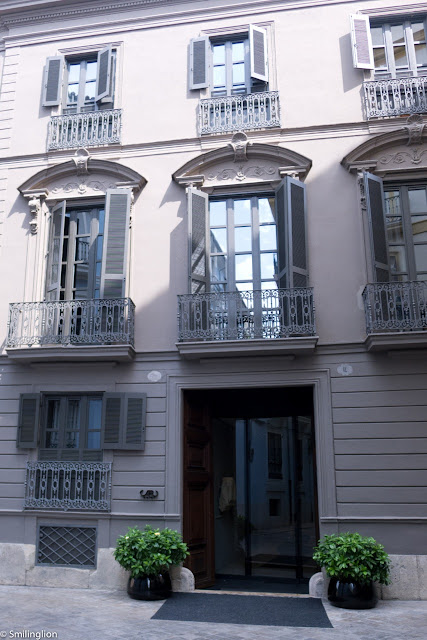 Caro Hotel has a new restaurant located in its basement, and despite its location, had plenty of natural light from the skylight and was designed around the remnants of the old city boundary wall. It also had one of the best value lunch set menus which explained why it was fully packed during the afternoon when we visited it. 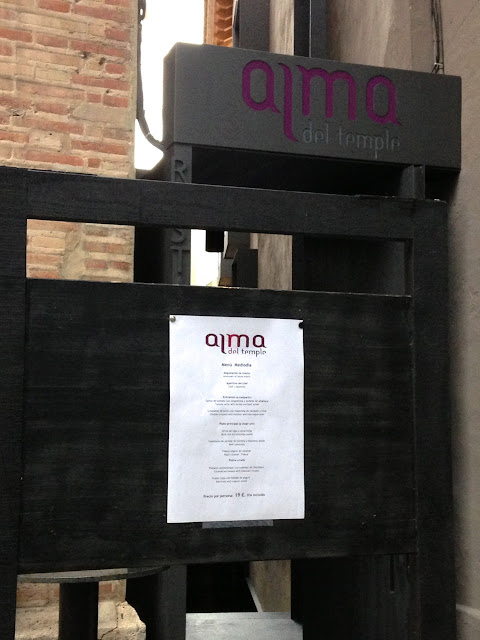 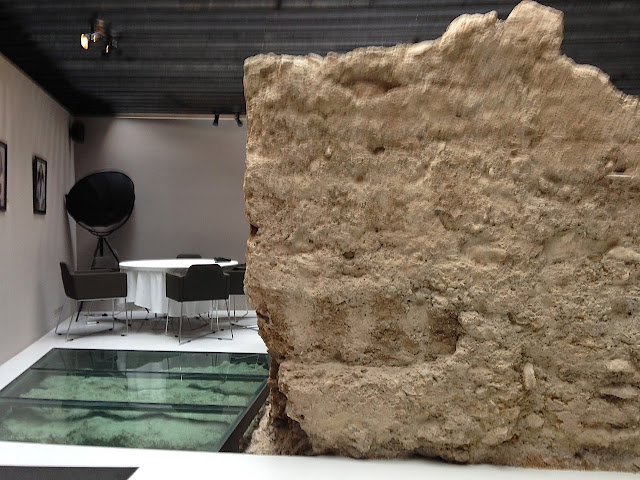 At EUR 19 for a three course lunch (inclusive of a drink - for us this was a glass each of cava), this was an unbeatable offer, especially given the beautiful surroundings and professional service. It was also a very well-adorned, well-lit and comfortable dining room, and was an oasis from the sweltering heat outside. It didn't surprise us that the clientele at lunch was mostly professionals in their power suits and jewelled ladies-who-lunch. 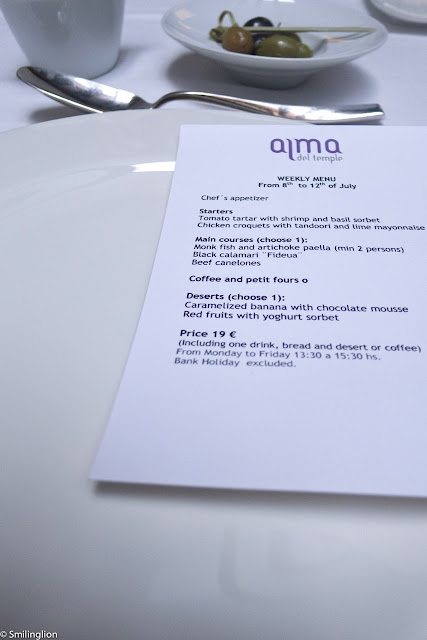 Even for such a low-priced menu, this didn't deter the restaurant from attempting to make a good impression with a delicious foie gras custard with almond flakes as an amuse bouche. 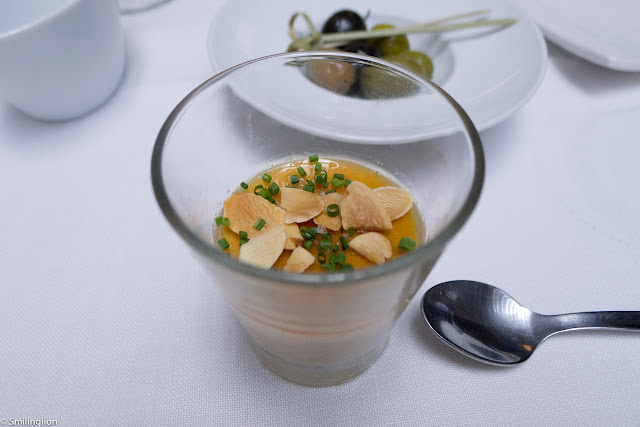 Tomato tartare with shrimp and basil sorbet: For the starters, we had a choice between two starters and we opted for one each. The raw shrimp on a bed of tomato tartare was very good and the basil sorbet was an interesting touch. 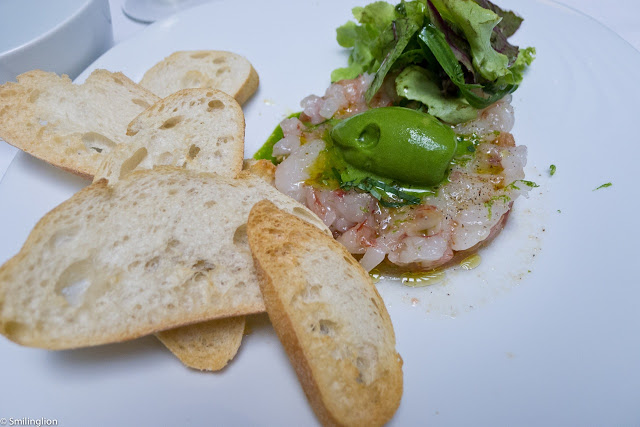 Chicken croquets with tandoori and lime mayonnaise: This was also something unique; the croquets had a very Asian flavour of tandoori which was unexpected and very delicious. 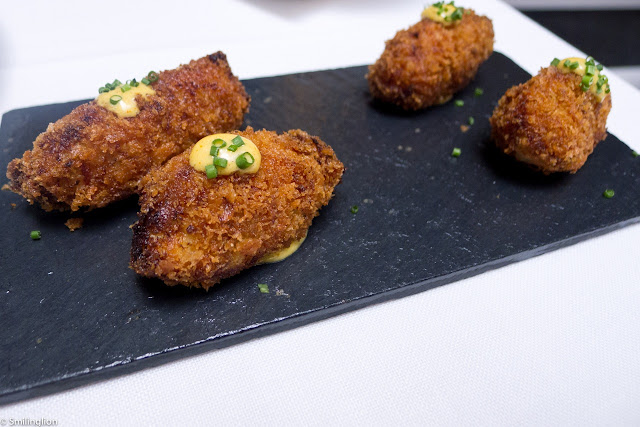 Beef canelones: This was quite the comfort food. The pulled beef was stuffed in a thin wrap and lightly grilled. It was excellent. 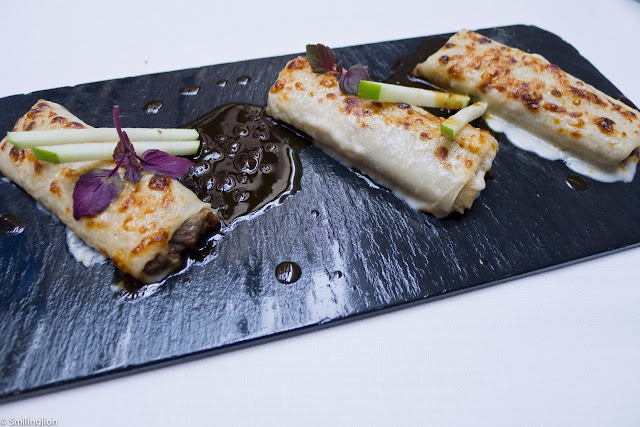 Black calamari "Fideua": A typical local dish and an alternative to the paella, this was short pasta (like cut spaghetti) cooked aglio olio style in squid ink. It was very good. 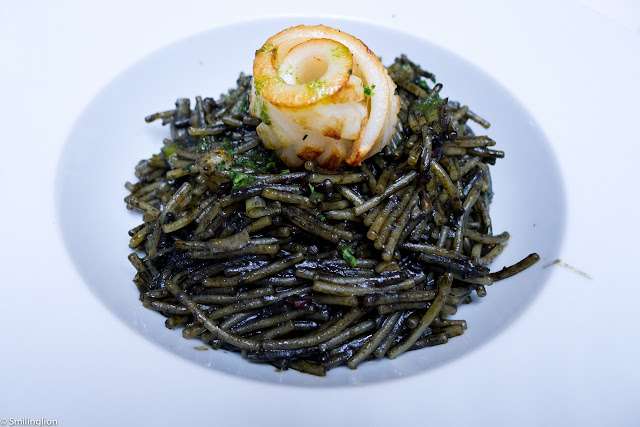 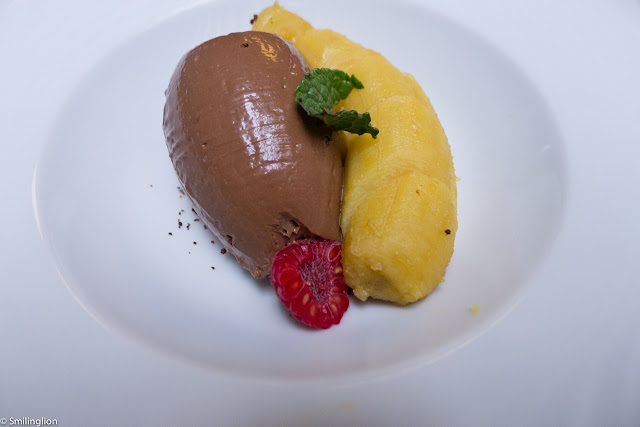 Red fruits with yoghurt sorbet: But this dessert was very good. The tartness of the raspberry and its puree was well balanced by the creaminess of the yoghurt sorbet, resulting in a very refreshing dessert on a hot day. 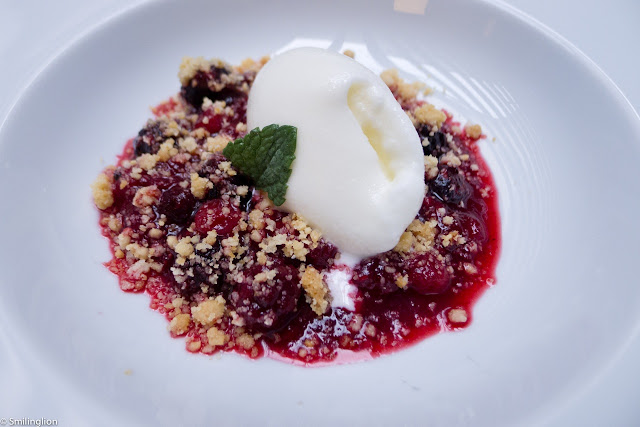 Final Thoughts: Putting aside the fact that this meal cost us EUR 19 each, it was a very enjoyable meal in a lovely dining room where we found ourselves surrounded by parts of exposed masonry which had archeological significance. Service was good if not slightly tardy, and the food was good.
Posted by Smiling Lion