Update: Saison won its third Michelin star in the 2015 Guide.

In 2009, two young men, who between them possessed not inconsiderable food and wine knowledge and skills, started a pop-up restaurant in the grungy neighbourhood of SoMa in San Francisco, which then morphed into a more permanent establishment of what has become known as one of the best restaurants in the city. The obligatory plaudits followed and before long they received two Michelin stars and a big cult following. In 2013, they moved into their new premises (also in the SoMa district but in a more upmarket area) just across from the AT&T Park (the home stadium of the San Francisco Giants baseball franchise). It so happened that we visited them on their opening day of their new premises (we made bookings months earlier before the official announcement of the move and were only informed about the change in venue shortly before the date).

Both men were in attendance that night; the very intense culinary wizard Josh Skenes and his partner, the charming wine savant Mark Bright. There was a palpable sense of excitement coupled with tension for their opening night in what they hoped was (according to one of the servers) their premises "for the next 50 years". There were, as to be expected, certain 'issues' resulting from the move which was yet to be resolved, for example, the guest toilets were not yet open for use (we had to use the makeshift toilet in the staff quarters) and some of the cocktails and wines in the drinks menu were not yet available. They were most apologetic for these 'lapses' which if we were being honest, weren't even that critical to us guests, especially in the context of expected teething problems arising from a recent move. 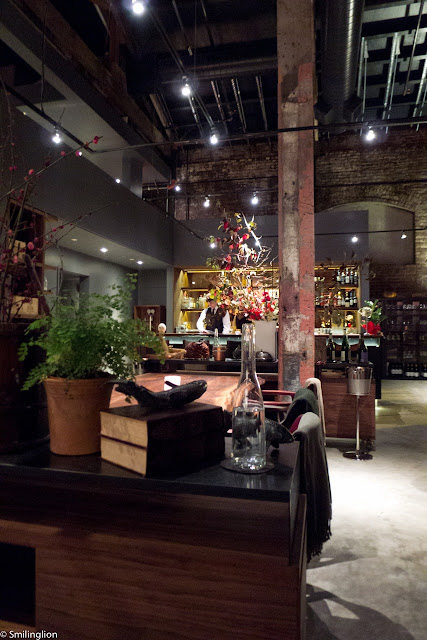 We had not been to the old restaurant, but we were in awe of the new space. A rather nondescript entrance along the side of Townsend Street opened up into a large two-volume loft-like space with exposed brick walls, a concrete floor and a chic industrial and unfinished look. Aside from some bar seating (where they serve a smaller menu with tapas-style food), there were only a total of 18 seats spread out in a relatively large space, and the tables were separated quite strategically by countertops, flower pots and pillars. In this layout, the entire dining room was an extension of the kitchen, as there was otherwise nothing separating the diners from the rows of kitchen countertops and stoves (our table, which was in the centre of the room was just next to a row of fridges and freezers). This enabled us to watch at all times everything which was happening in the kitchen, yet still felt like we were shielded from the other diners by various potted plants and other paraphernalia. 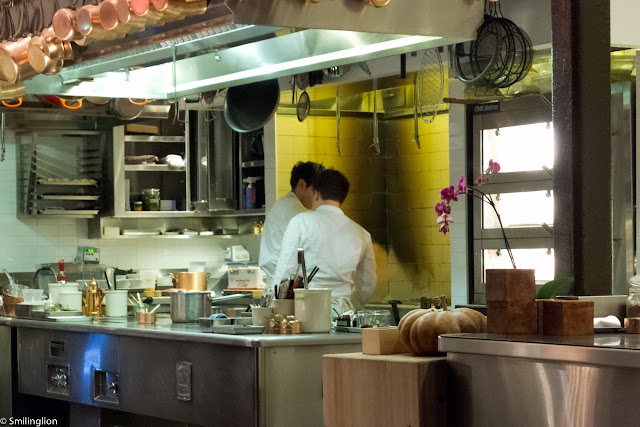 Before we go into describing the meal, it must be said that the entire dining experience was superlative that evening. Taking the food out of the equation for the moment (as this will be covered below), this was probably our most enjoyable meal ever, and this is no mean feat given the number of other fine dining restaurants throughout the world at which we have had the good fortune of dining. And all this originated from Josh Skenes' and Mark Bright's concept of dining at the chef's table, whereby all 18 of us diners, though we were spread out throughout the large dining room, were treated as if we were all part of a large communal table seated around the kitchen (made possible by the very unique and inspiring layout of the restaurant). All through the dinner, although we had an allocated server to take care of us, various different members of the service staff as well as many of the chefs took turns to serve us our food, often spending a minute or so to engage us in conversation, whether about the food, the wine or just making casual chit chat. Even Chef Josh Skenes brought one course to our table and explained the dish (though he was a bit stern and to be honest we were a bit scared of him). In this manner, we had the chance to interact with almost all of the staff during the course of our meal, and it literally felt like we were eating at a kitchen counter overlooking the kitchen, yet retaining the privacy of sitting at a table separated from the other guests (which would not have been possible in a typical chef's table set-up). All these would not have been possible without the highly commendable service by the staff. From the moment we stepped into the restaurant until we finished the meal and stepped out, we weren't just treated like royalty (which is to be expected in a 2-3 Michelin star restaurant); in fact, we were also treated like friends. The memory of the warmth and sincerity of the service that evening will stay with us for a long time.

We were served bespoke cocktails at the bar while waiting for our table, and when finally seated, shown a single tasting menu printed on a sheet of paper. This was the meal for the night and there was no option for a la carte or a shorter tasting menu, and after taking down our allergies and dislikes (for which we had none), we were to have left it all to the Chef and his kitchen to entertain us for the evening. Not knowing what we were going to eat, it also made ordering wine difficult (as we wouldn't have an idea what wines to pair with our food), so we went with the wine pairing option as well, which turned out to be an inspired decision.


Before the food service started, we were served with a glass each of Krug Grand Cuvee, in a Krug champagne glass. It was a statement of intent. The glass of a citrus drink which tasted like limoncello with citrus zest with 2 cute petals coating the rim of the glass was our palate cleaners before the menu commenced. 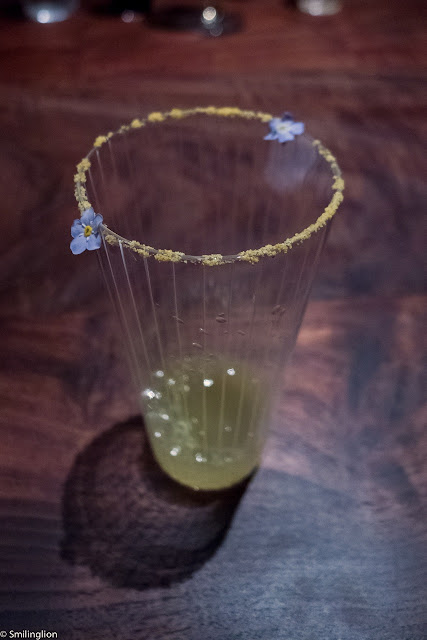 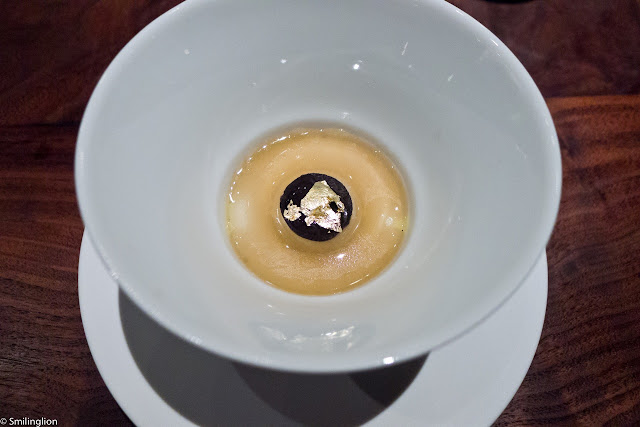 The cocktail glass of a generous dollop of fresh and raw sea urchin and an equally generous spoonful of caviar (which was smoked in the kitchen) was combined with a base of pumpkin which provided the sweetness necessary to bring out the flavours of the exotic seafood. 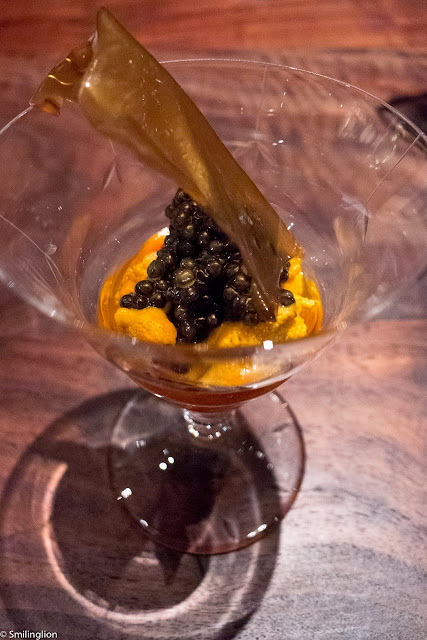 Next, on a solid glass block reminiscent of a small glass cigar ashtray sat a live scallop with a slice of pear. The subtle pairing of the sweetness of the fruit and the cold and clean taste of the scallop was an unusual yet refreshing experience for us. 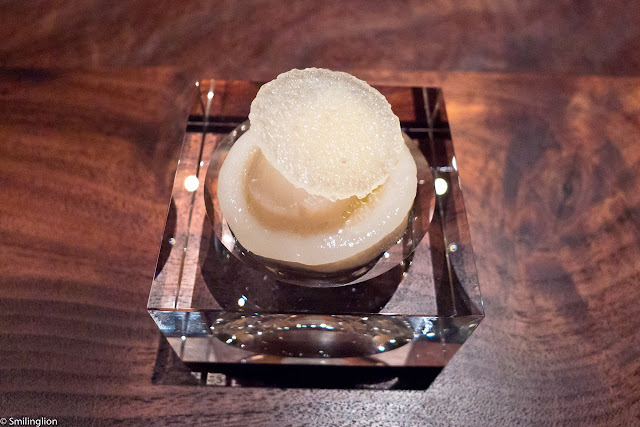 Continuing on the raw seafood theme was the mackerel wrapped with a gelee made from fish bones. The gelee was packed with umami flavour which really complemented that of the raw fish. 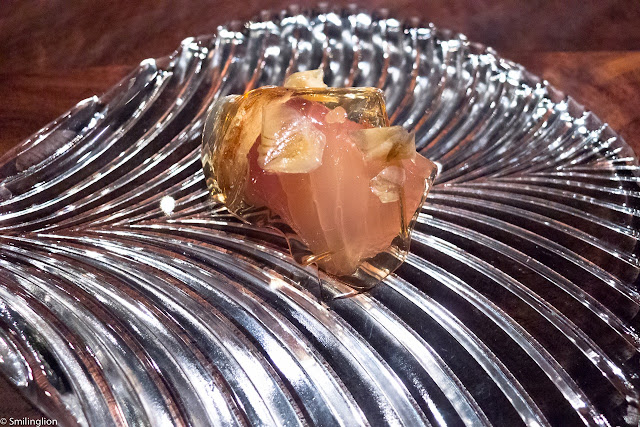 The relatively simple concept of putting lots and lots of fresh fish roe on a fish cracker was in fact one of my favourite moments of the dinner. Putting the entire piece in my mouth, the fish roe exploded releasing cold flavours amidst the dry crunchiness of the cracker. We thought this was a very clever combination of taste and texture yet executed in the simplest manner possible. 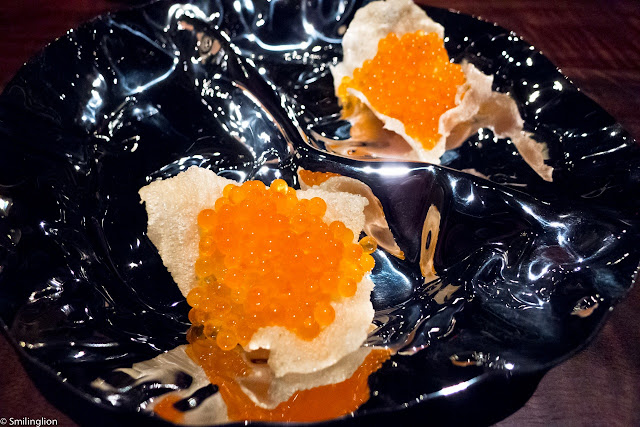 Sashimi-like strips of raw blue fin tuna were then covered with air-dried flakes of sea urchin. It was an interesting idea, but we felt that the sea urchin flavour didn't really manage to hold its own against the dominant taste of the tuna. 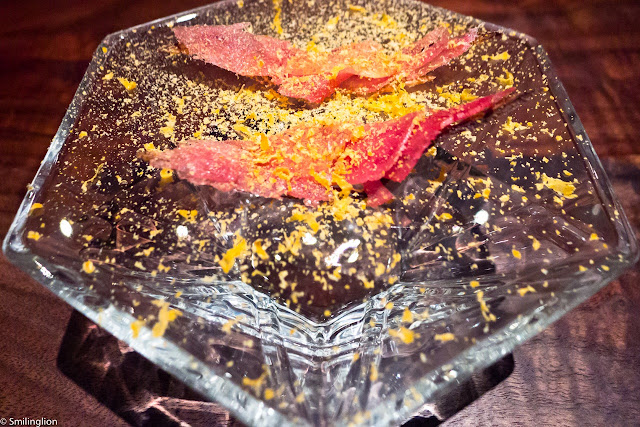 Next was the Monterey abalone with wheatgrass, and it carried on the seafood theme of the evening with a noticeable change in emphasis towards vegetables with a rather herbaceous tasting dish. 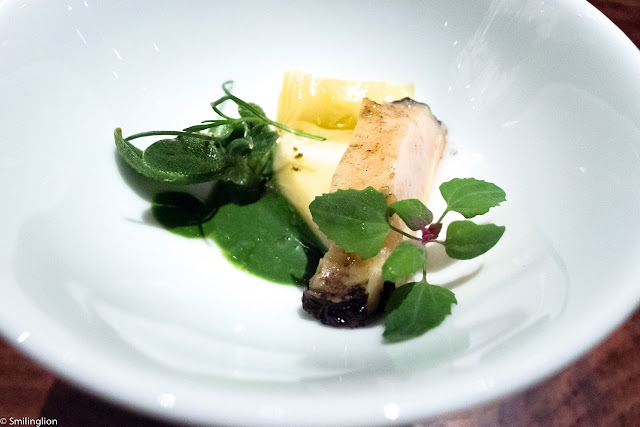 This brought us nicely to the midpoint of the meal, where we were served a wooden plate of various different vegetables each prepared in a different way. We thought it was brilliantly put together and the variety of tastes, textures and temperatures combined to perfection. 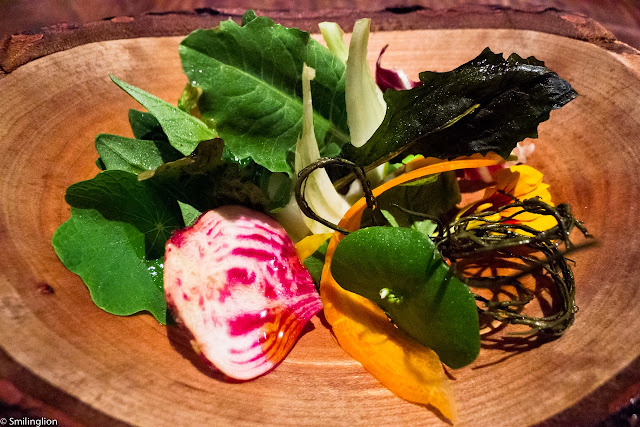 As the meal progressed and each dish was more 'cooked' than the previous, the next was the poached quail egg wrapped in dried brassicas and accompanied by a seaweed bouillabaisse on a bed of barley. It was another unique blend of flavours which worked very well in this case. 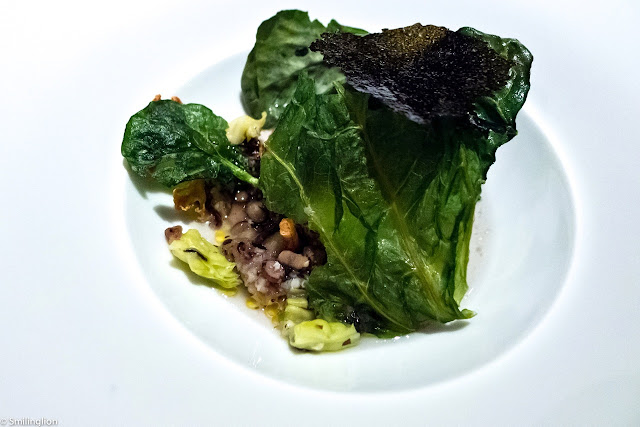 The small but immaculately cooked sea bream with thai curry powder was probably one of our favourite dishes. 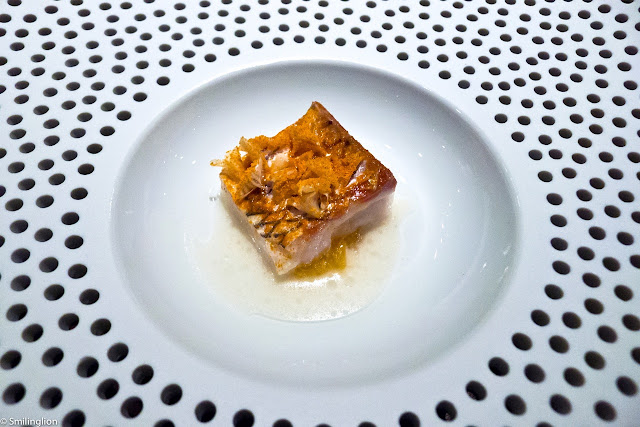 To cleanse our palate as we moved from the fish course to the meats, we had an intriguing chicken liver toffee with beer foam, white chocolate and bits of grapefruit pulp. 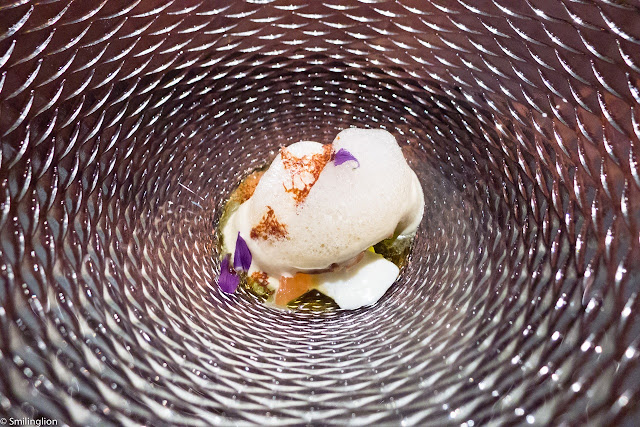 The squab dish was quite spectacular. It was simplicity in itself: the meat, a sauce and a few drops of berry purees to balance out the flavours. 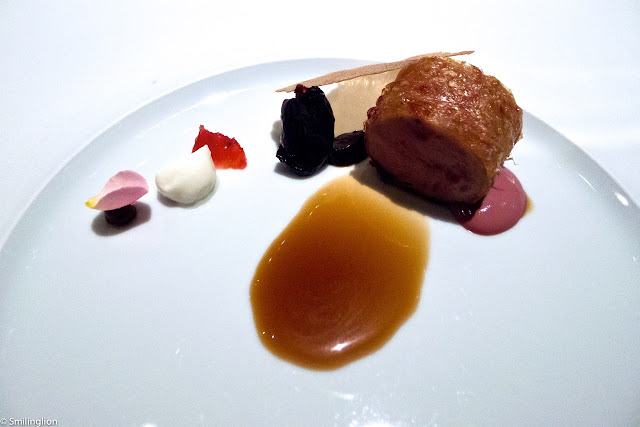 The 50 day aged Sylvia's beef was amazing; full of flavour which was bought out by the subtle sweetness of the accompanying beets. To go with the beef was the 2010 Saison Syrah from Napa Valley which was made by none other than Mark Bright himself, and it was very good. 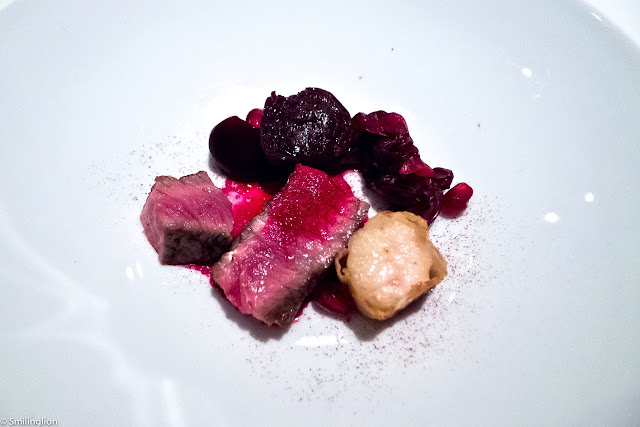 Cheese course was a puck of cheese with a sweetish cracker and a drop of jam on top, accompanied with a glass of 2009 Domaine D'Orfeuilles Vouvray from Loire. 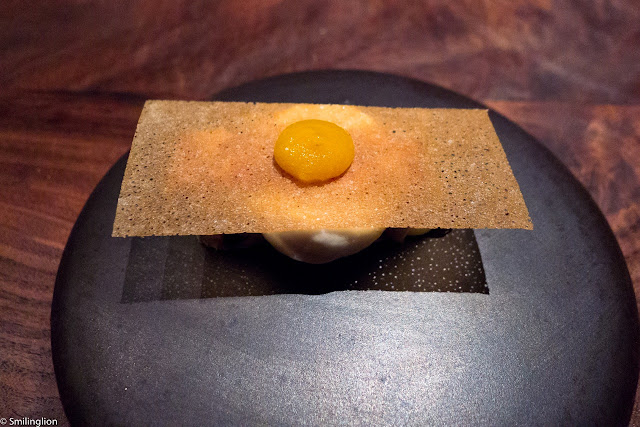 To further clean our palate before dessert, we had the sorbet (looking like it was squeezed out of a tube) and accompanied by slices of lemon meringue. It was very good. 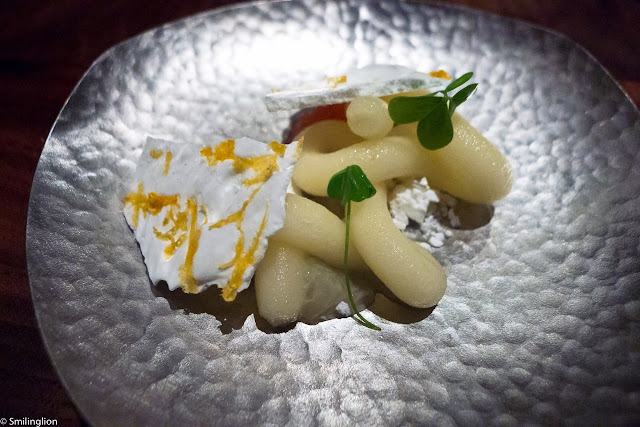 Finally, the pine nut soufflé which must rank as one of the best soufflés we have ever had. This was excellently paired with a sweet wine, the 2005 Chateau de Malle from Sauternes. 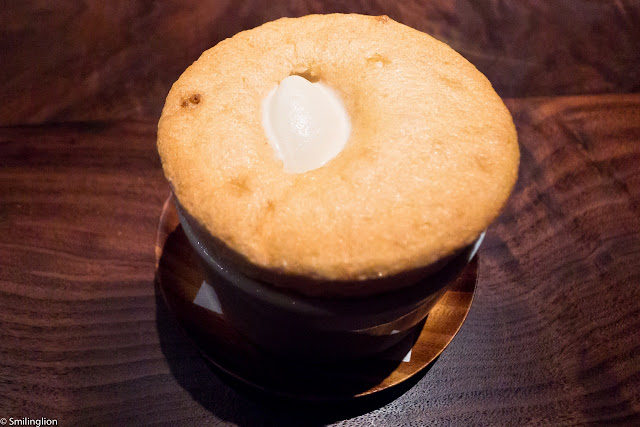 We had some Chinese black tea with our mignardises and canales, and were each given a piece of brioche to take home (for breakfast, which was very handy). 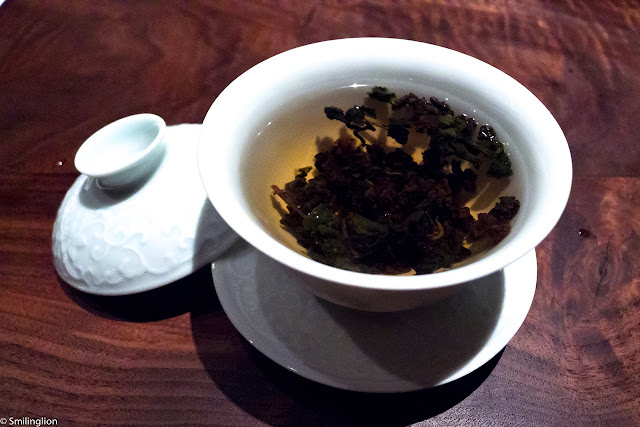 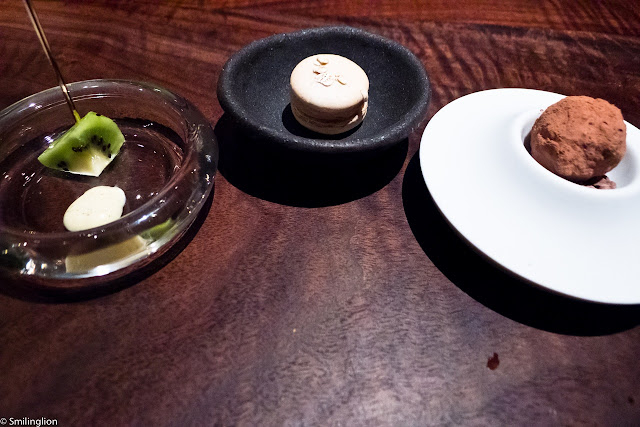 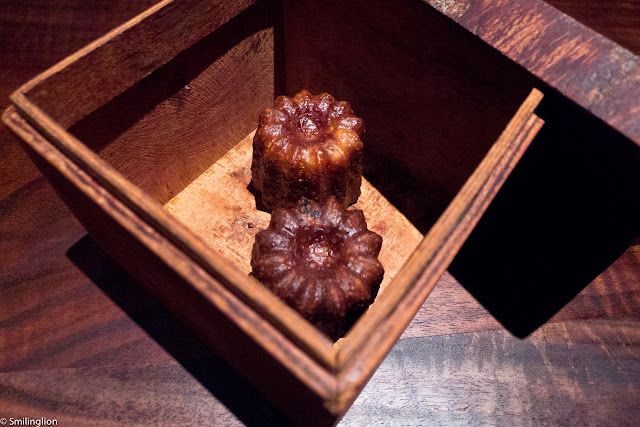 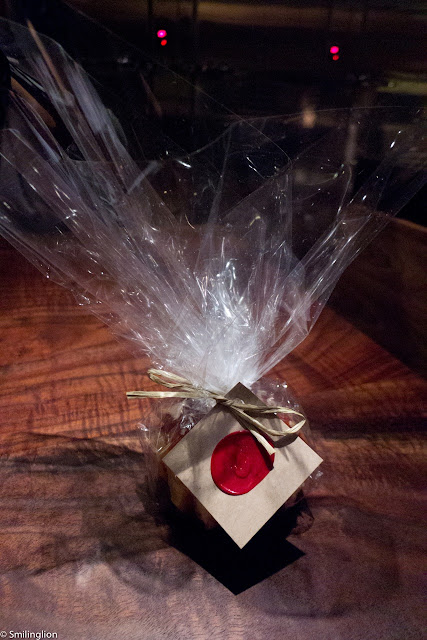 Impressions: If there was ever any instance which demonstrated the importance of the non-food aspects of the fine dining experience, this would be it. The concept of giving diners the personal attention of the chefs yet being seated away from the other guests was new to us and very successfully implemented in this case, and we cannot compliment enough the genuineness of the service that we had received that night. The food was excellent yet what we noticed was the clearly identifiable flow of the menu, from the raw to the cooked, from the seafood to vegetables to the meats and from the cold to the hot. In addition, each dish served was timed to perfection and we didn't feel that any dish came too soon or took too long. Maybe no one dish was the kind which would on its own bring us back here, but the seamless journey which Saison brought us through, in every aspect from the structure of the menu, the execution of the cuisine to the actual service of the food to our table, was in itself an object lesson of the art of fine dining.
Posted by Smiling Lion