In the heart of the Napa Valley wine country about an hour's drive from San Francisco is a tiny town in the rural countryside with a population of about 3000. Yet despite its humble size, Yountville is a place of some import on the culinary map of the USA. Because it probably has the most Michelin stars per capita in the country (5 stars shared between 3 restaurants). It is also the most unexpected place where one can get a good meal at any time of the day (the preserve of the really big and vibrant cities, rarely that of rural countryside hamlets), even late at night. In addition, Yountville is strategically located between Napa town and Calistoga, which are the ends of the key tourist route of the Napa Valley wine region. It is for that reason that we decided to spend four nights in Yountville and use it as our base to explore the Napa Valley region during our recent trip to the USA.

In the centre of Yountville is the very distinctive red brick-clad building which houses Thomas Keller's bistro, Bouchon. This is a one-star eatery which is styled in the manner of a French bistro and is both casual and open till late every day of the week. 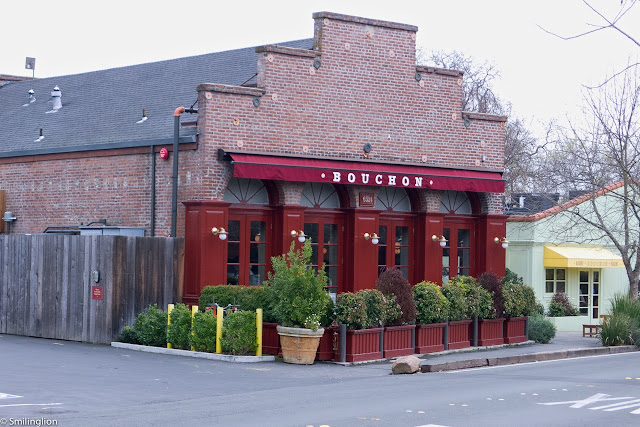 Just next to the red Bouchon Bistro is the equally recognisable yellow facade of the Bouchon Bakery, where Yountville residents and tourists alike queue every morning and throughout the afternoon for its warm bread, sandwiches and pastry sweets. In the town where he made his name, Thomas Keller's fingerprints can be seen all over, and in addition to his culinary temple The French Laundry and the Bouchon bistro and bakery pair, he has a few other casual eateries within walking distance, making it really difficult for one to spend any time in this town and not dine at any of his establishments. 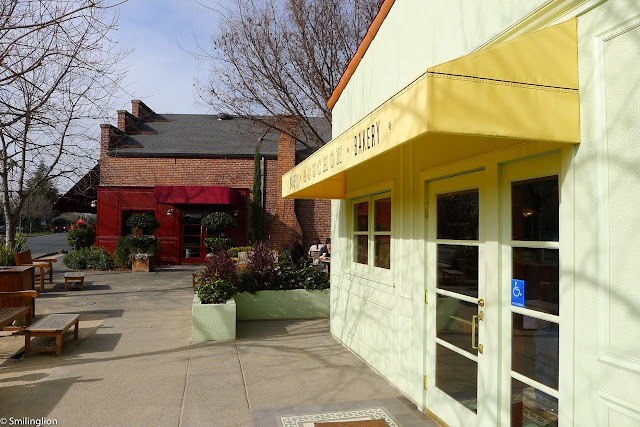 Bouchon Bistro's menu is set out simply on a one-page menu, and includes the usual french bistro fare.

Lobster bisque: This was an excellent soup which was a special dish of the day. The bisque was rich and thick and on it was a large nugget of breaded lobster. 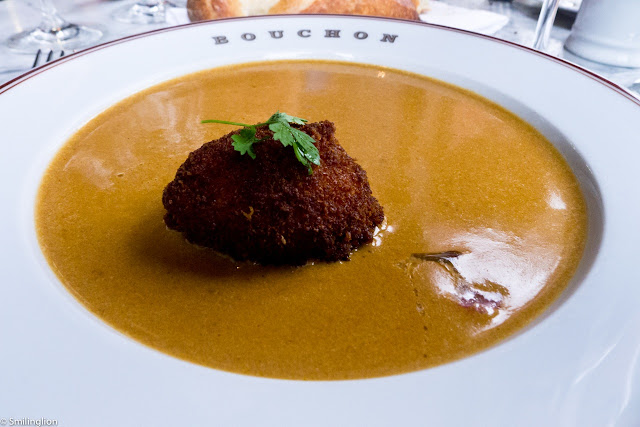 Steak Tartare: Another appetiser off the menu was the steak tartare which was also very good. The pieces of raw beef were cut quite uniformly into cubes and was of a high quality (no tendon or fatty parts). 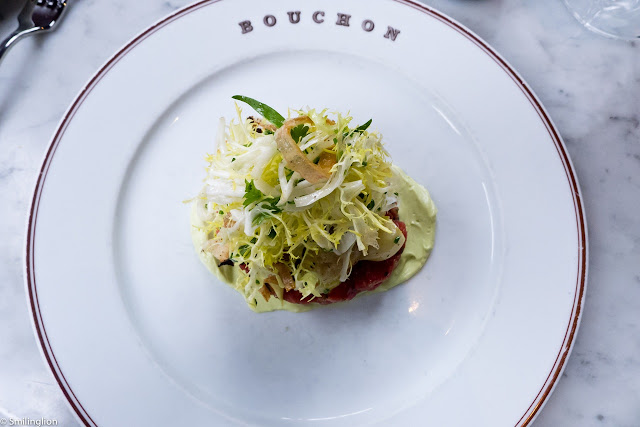 Poitrine de Porc Glacee - glazed pork belly, braised cabbage, bacon lardons and poached prunes with pork sauce: A dish which we ordered off the menu, the pork belly was delicious, and its strong flavours were well balanced by the sourish cabbage. 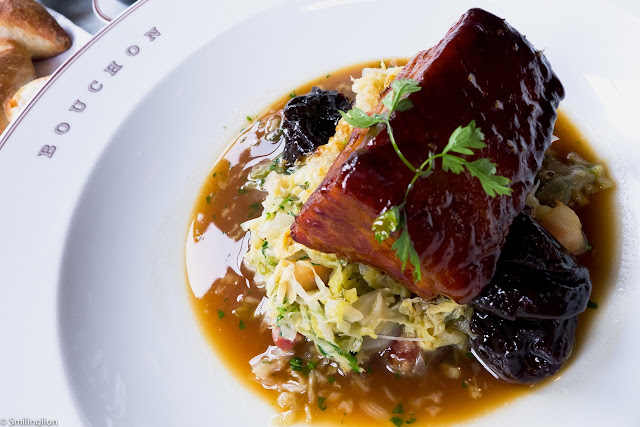 Sauteed spinach: A good side dish of greens to accompany our main courses. 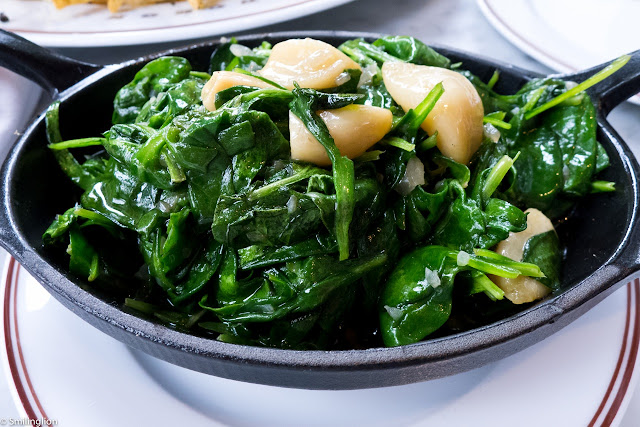 Steak Frites - caramelized shallots, maitre d'hôtel butter served with truffled french fries: A bistro classic, the steak was juicy and flavourful. We opted to top up for the truffled fries but in hindsight the normal fries were probably good enough. The portion of the fries was huge though and we didn't manage to make much of a dent in it. 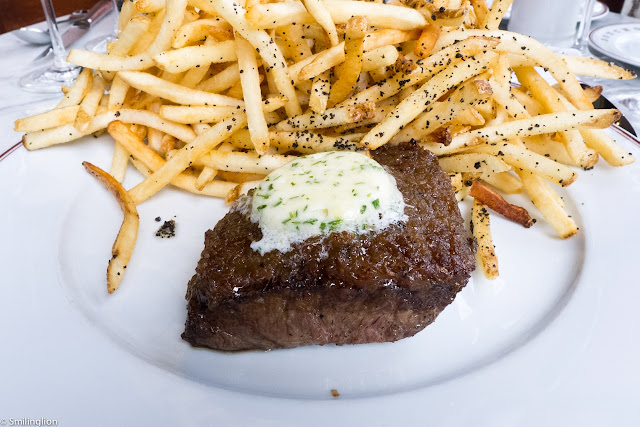 Baba au Rhum - Gosling's rum soaked brioche with creme Chantilly: The rhum baba is a dessert we always order when we see it on the menu and the one here was very good, although this version was a bit lacking in the alcohol. 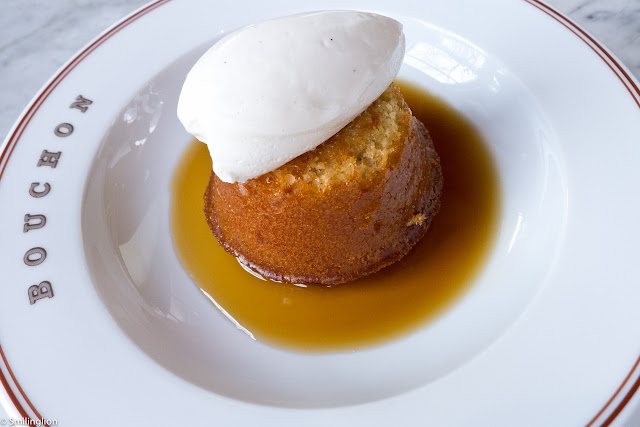 Impressions: The standard of the bistro fare at Bouchon was very high. The food was excellent and cooked with some finesse. This would be a great place to have lunch or to catch a late meal at night, given its casualness and the fact that it opens throughout the day and till late at night.
Posted by Smiling Lion