Update: We visited Ame again for dinner a week later. The post below has been updated to reflect dishes from both meals.

Ame is the collaboration of renowned Chefs Lissa Doumani and Hiro Sone of Terra fame (a restaurant in Napa Valley) in the luxurious St Regis Hotel in San Francisco. Holding one Michelin star and helmed by Chef Randy Lutz, it features a Japanese-American cuisine with a very deliberate use of raw fish in the style of sushi and sashimi. In fact, there is even sushi counter seating at the front of the restaurant where diners can look into the refrigerated glass cabinets where the raw fish is stored and watch the chefs prepare the food. The formal dining room, where we were seated, was very dimly lit to give an air of discreet sophistication (which unfortunately made no-flash photography extremely challenging - we had to push the limits of the ISO settings on our camera). 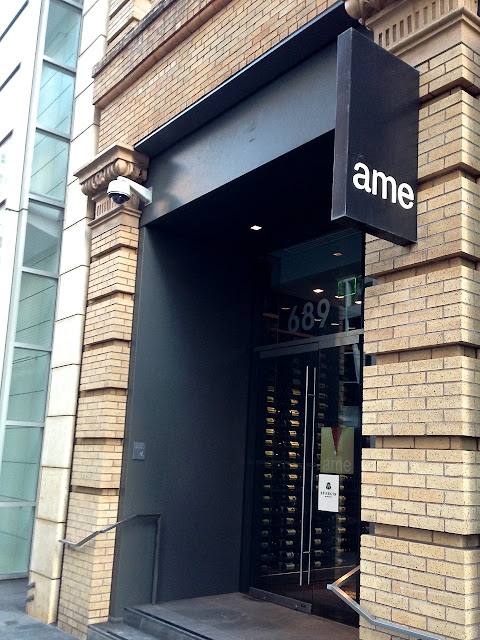 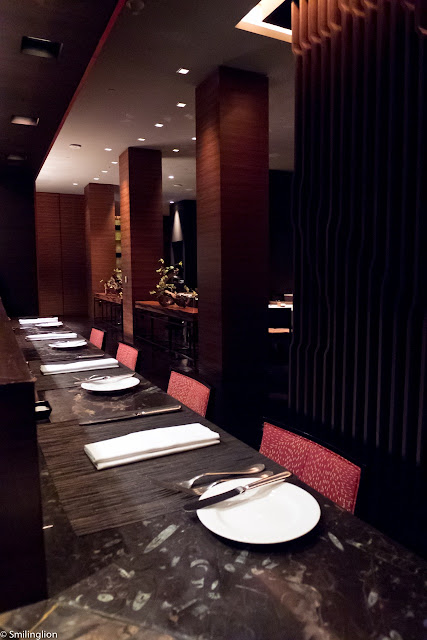 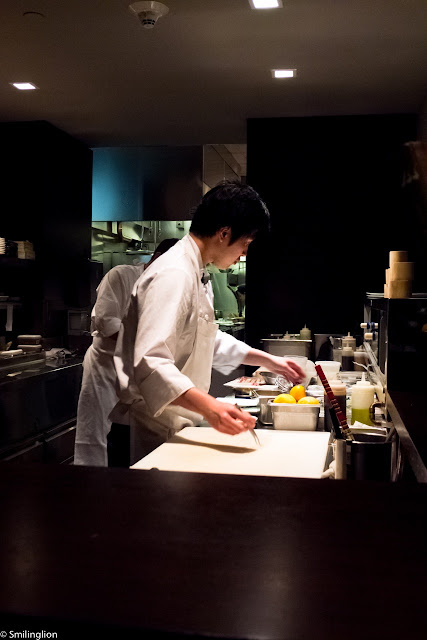 The restaurant had a tasting menu and an a la carte menu (from which we each picked out two appetisers, a main course and a dessert). From a relatively limited wine list, we selected a delicious bottle of Californian Chardonnay from Mount Eden Vineyards which was very buttery in nose and flavour (matching well with our dishes throughout the dinner). 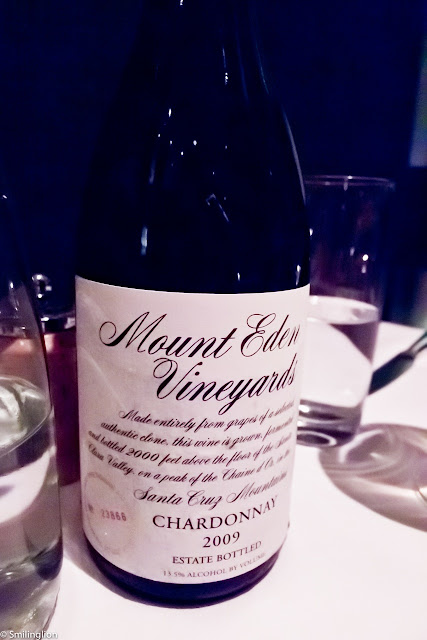 Cerviche of amberjack with avocado, ruby grapefruit, charred fresno chili and lime salt:  These were sashimi-sized chunks of raw amberjack with an amazing mix of ingredients which were perfectly complementary. 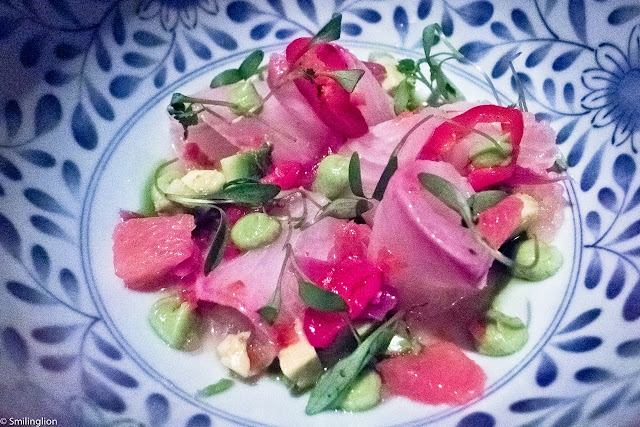 Tempure "poke" with Ogo seaweed, Hawaiian sea salt and green onions: The lightly deep-fried seaweed rolls were slightly disappointing as they were a bit soggy, but were rescued by the addictive mayonnaise. 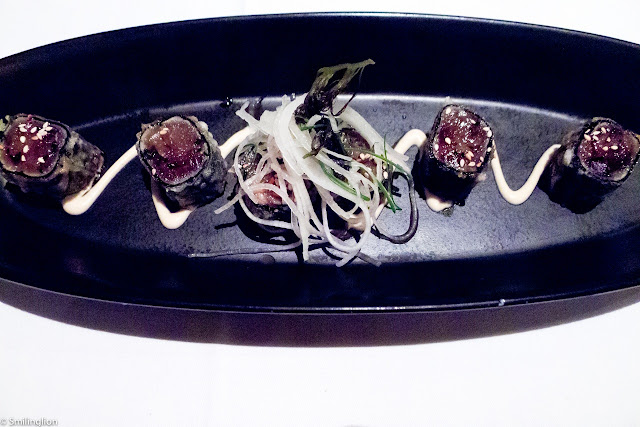 Today's crudo (red snapper and mackerel) simply prepared with extra virgin olive oil, lemon and sea salt: The raw fish was very fresh and the use of crackers with the sashimi was brilliant. 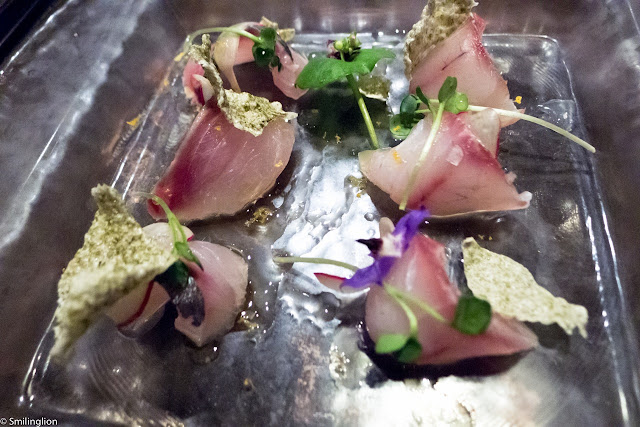 Raviolo of pheasant with forest mushrooms, caramelised cipollini, roasted game juice and winter black truffles: This large singular raviolo was delicious, and the black truffles and game juice sauce was the star of the dish. 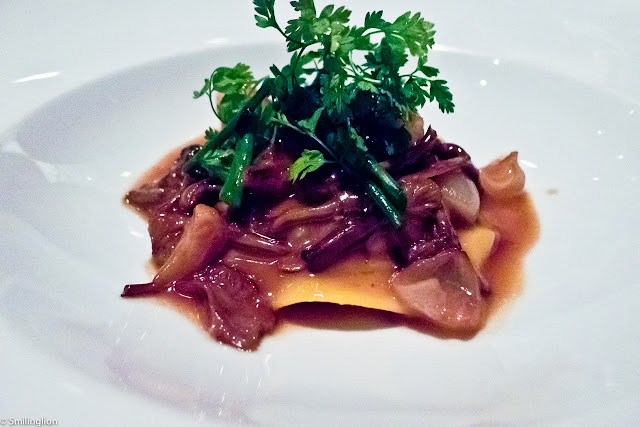 Panko crusted Miyagi oysters on slow-braised pork belly in black vinegar sauce with horse radish cream: An interesting dish of breaded oysters on a bed of pork belly which was elevated to the next level by its sauces. 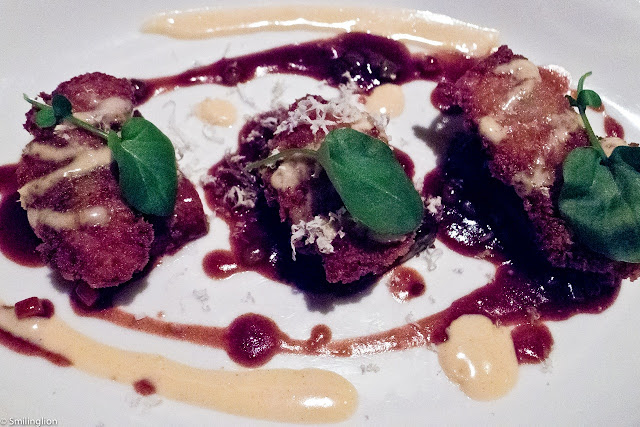 Butter poached Maine lobster and Hokkaido scallops, roasted cauliflower, pickled sultana grapes and curry brown butter sauce: This was a mouthful of buttery goodness and was an excellent main course. 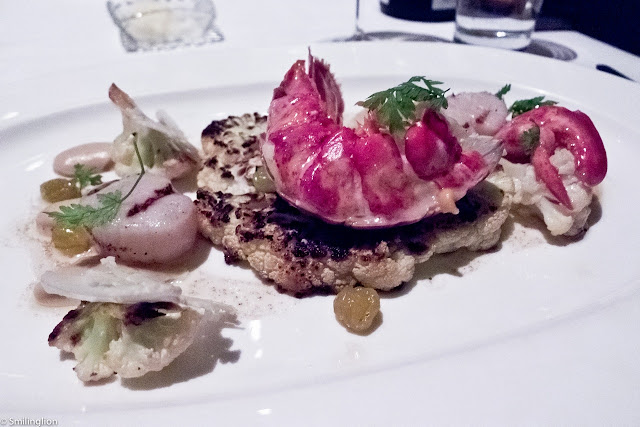 Broiled sake marinated Alaskan black cod and shrimp dumplings in Shiso broth: This was the signature dish of this restaurant and was as good as it was advertised to be. Initially we were concerned that it would taste like miso cod which was so last decade, but surprisingly the marinate and broth had plenty of umami flavours without being too overpowering. We thought this was so good that we ordered it again the second time we ate here. 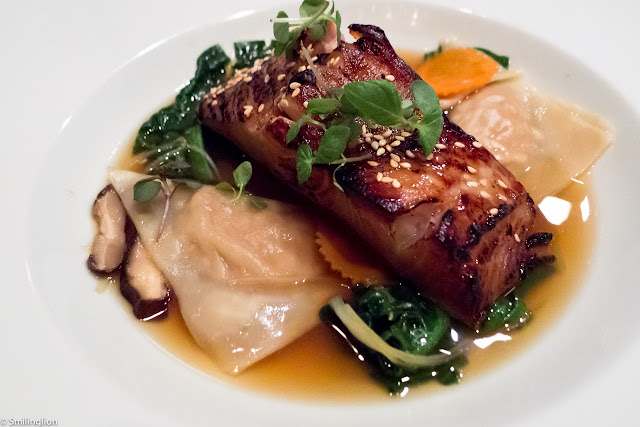 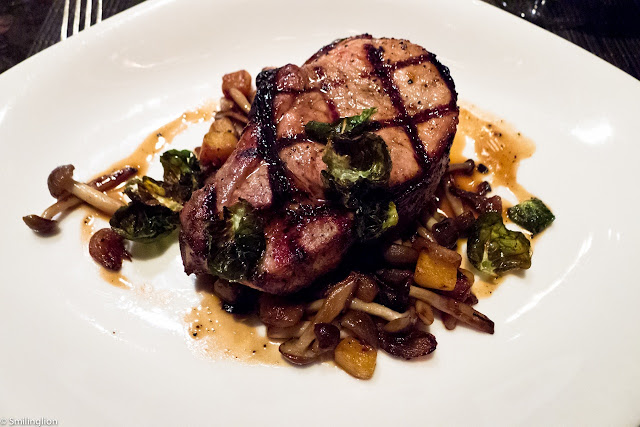 Beer donuts with chocolate stout ice cream and chocolate fudge sauce: Donuts with chocolate fudge? This was a no-brainer. It was superb, though it was a massive dessert to be eaten by one person (which we successfully did anyway). The bitterness of the beer and stout flavours were subtle and served to balance out the otherwise very sweet donuts and chocolate. This was another dish we repeated the second time we were here. 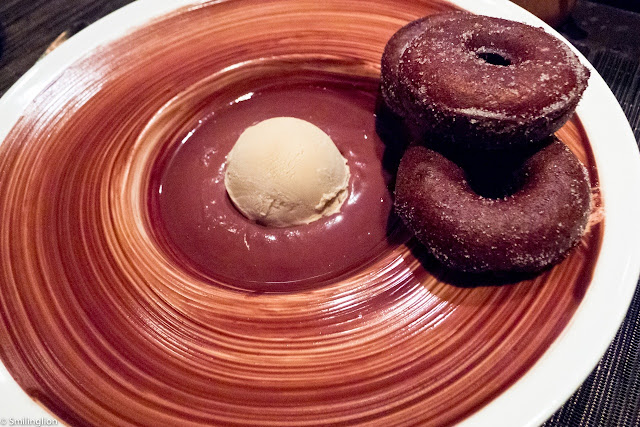 Apple and quince tart with hazelnut ice cream and Fior di Latte ice cream: This wasn't as impressive as the donuts and the apple tart itself was not special but the use of hazelnuts in this dessert made it quite good. 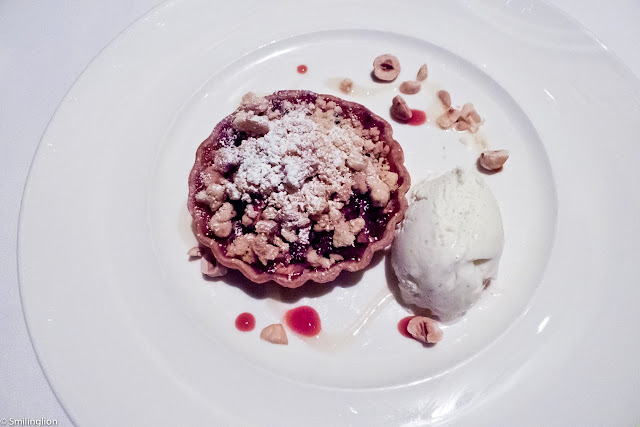 Impressions: Ame pulled off the Japanese-American fusion cuisine quite impressively. Despite being jetlagged and having a reduced appetite as a result, we still finished our food easily. We liked in particular the unique flavours from the use of Asian ingredients cooked in the Western style (especially with the use of the sauces) and presented in a way which was clean and light on the palate. Service was warm, friendly and knowledgeable and we enjoyed a relaxed meal in a comfortable setting.
Posted by Smiling Lion