One of the wonderful things about Barcelona is that despite the fact that people there generally eat and stay out late, with dinners often ending no earlier than midnight, it is very possible to find good food for breakfast in the morning (except for Sundays when generally everything is closed). This is important to us when we travel as we usually try to avoid hotel breakfasts and prefer to get out to eat in the mornings. Hence we were quite fortunate that we discovered Tapaç 24 literally 50 meters from our hotel. Tapaç 24 is a basement Spanish tapas bar which is the smaller sibling of the renowned Michelin starred Comerç 24, the flagship of El Bulli alumni Chef Carles Abellans. 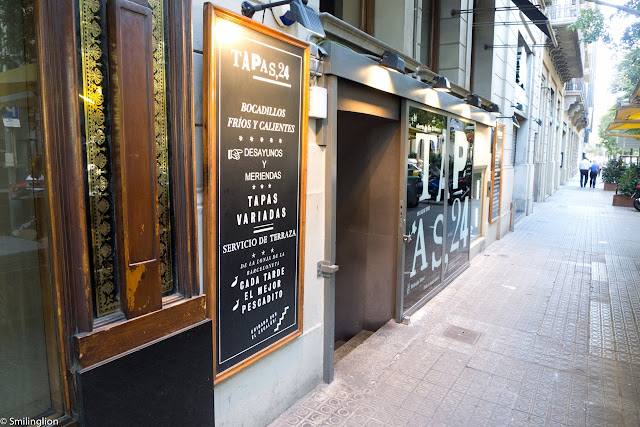 Despite a late dinner at Talles de Tapas along the very scenic Rambla de Catalunya and cocktails later at the Bankers Bar at our hotel, we were up bright and early the next day (probably due to jetlag) and were at Tapaç 24 just after 9am. At that time, the clientele was mostly local and the diners were having what looked like their daily breakfast of coffee and eggs or pastries by the counter, while reading their newspapers. We propped ourselves at the bar counter of a well-lit and cheery basement interior, facing a large shelf of cocktail and aperitif ingredients. But despite the temptation to startup day with a stiff drink, we opted instead for a coffee and some juice. The mixed juices in the menu turned out to be pre-mixed, and in hindsight we should've have ordered the freshly squeezed orange juice instead (the waiter would squeeze the oranges right in front of us). 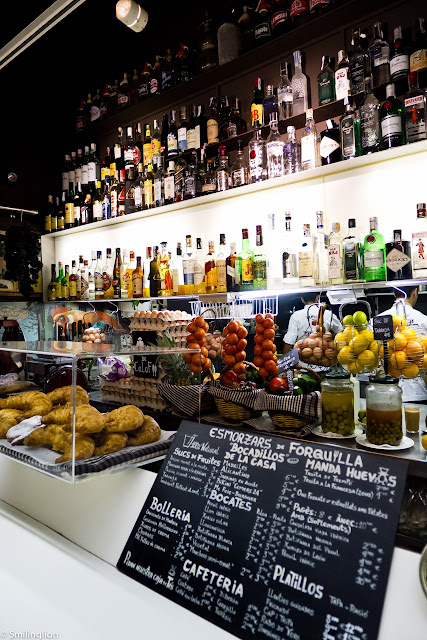 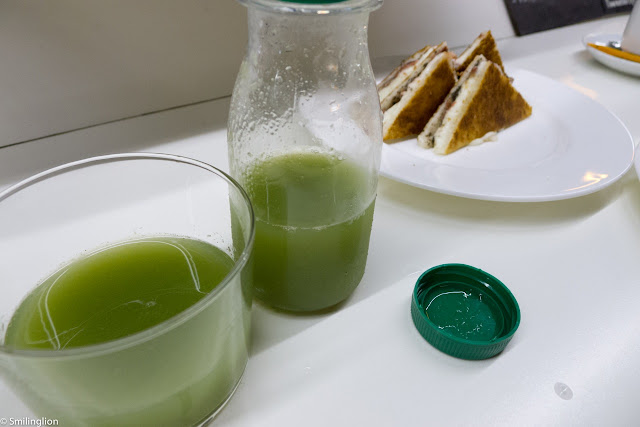 There was a busy rhythm about the place, with people coming in and out after a quick bite and coffee, and the old grouchy but otherwise helpful waiters were constantly occupied taking orders, delivering food and collecting payment. They must then have been bemused by the sight of us tourists, sitting at the bar not looking like we were in a hurry to go somewhere else, looking to order everything on the menu and occasionally taking pictures of our food. 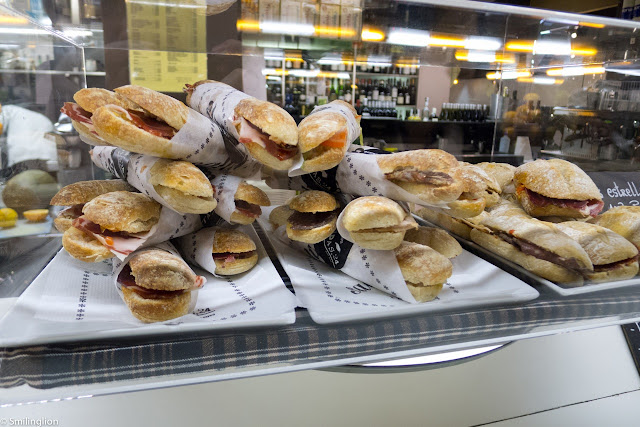 Even though we noticed many locals having the eggs and potatoes, we resisted the urge to do so as we had overdosed on the huevos con patatas bravas at dinner the previous night. Instead, we ordered two of their house specials, the Bikini and the McFoie Burger. The Bikini was the best ham and cheese sandwich we had eaten, and was made up of mozzarella cheese, Iberico jamon grilled in a thin bread with ends removed and some truffle powder. The sandwich would melt in our mouths with a burst of flavour from the ham and cheese, with the bread so thin that it was almost unnoticeable. 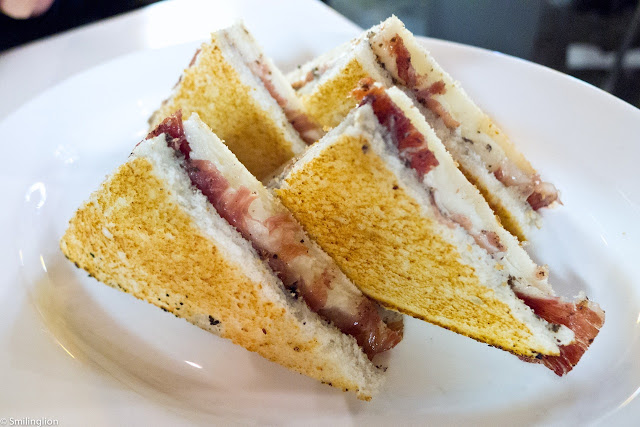 The McFoie burger was also very good (but rather heavy for breakfast). It was a small beef and foie gras burger accompanied by a scoop of foie gras ice cream. 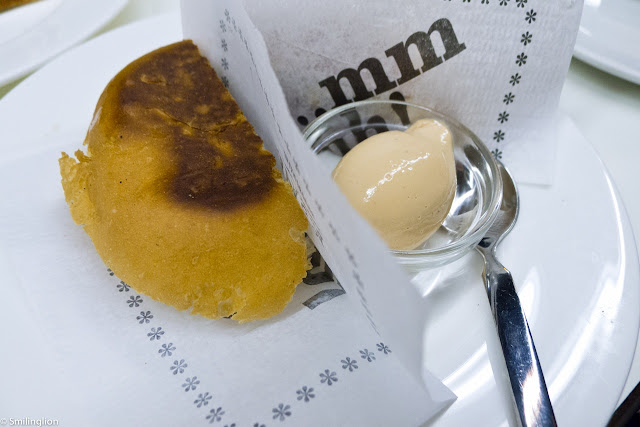 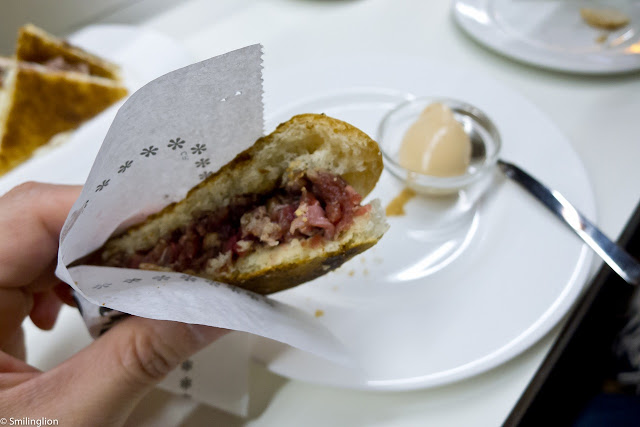 We ended off with some churros. 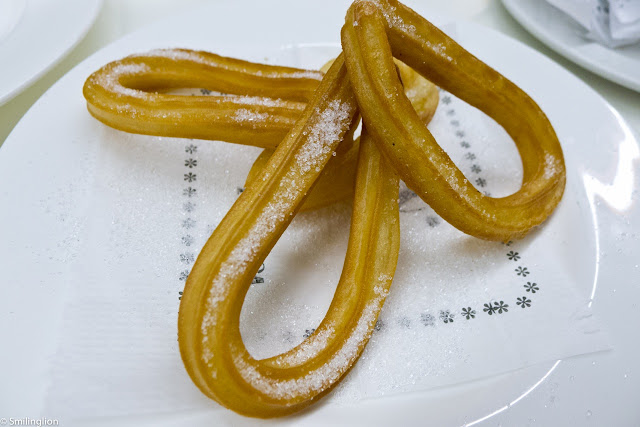 Two days later we came back here again for breakfast, and the waiters were less grouchy this time and treated us somewhat like regulars. We had a croissant-like pastry (chucho) at Pinotxo the day before which was very good, and when we saw it again, we had to order it. It was puffy and airy on the inside and delicately crispy on the outside. We loved it. 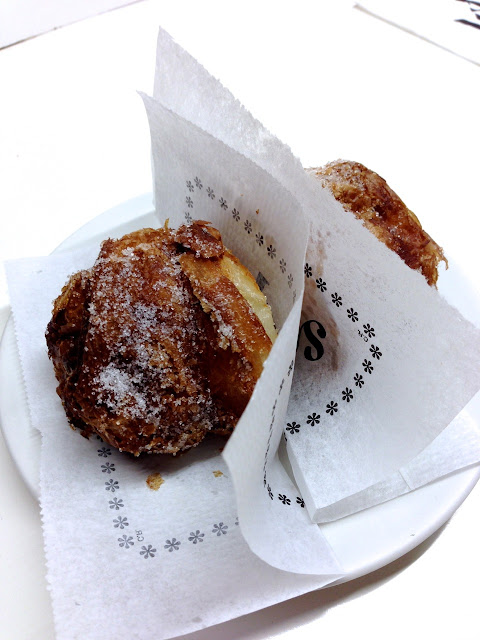 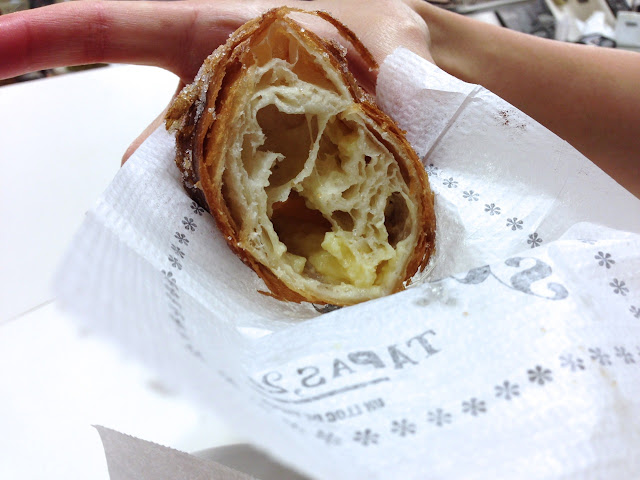 Being unable to resist, we ordered the bikini again (double portions this time). Our meal was accompanied this time by the freshly squeezed orange juice which we should have ordered the last time. 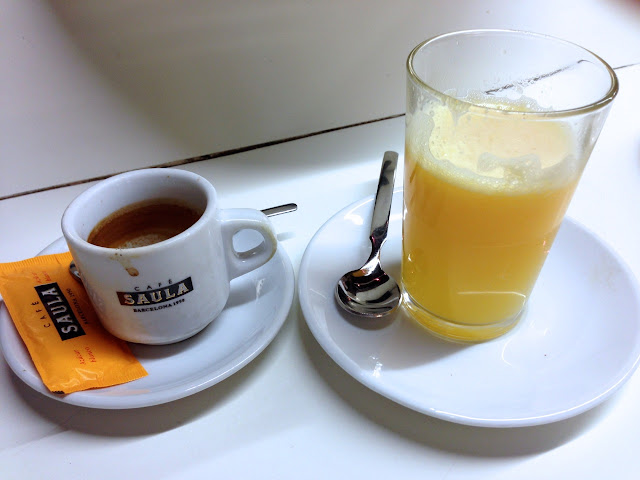 It was supposed to be a light breakfast (we were going to Sant Pau for lunch), but we were about to ask for the check when we succumbed to the temptation to ask for what we saw the locals ordering the last time we were here for breakfast: the eggs and fries. We did not regret. It was a memorable dish, especially optional order of the crispy bacon made from Iberico jamon which raised the bar immeasurably for any other bacon we will consume in the future. 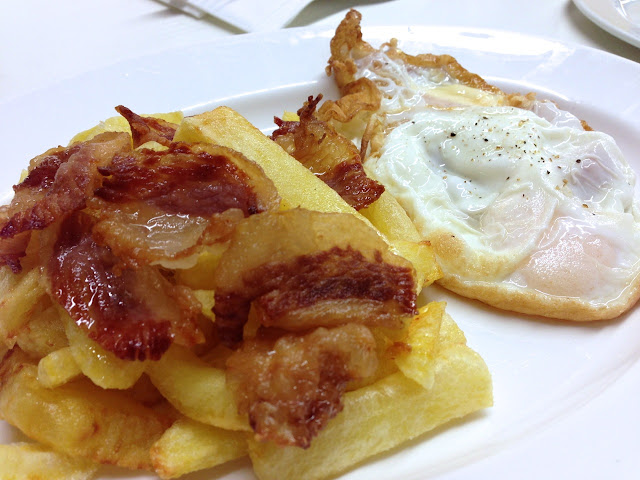 On our last day in Spain, we popped by again for a late lunch (late being 5pm). The menu was quite different from breakfast (though they still had the bikini, which we ordered again). The croquettes (ham and cheese) were very good. 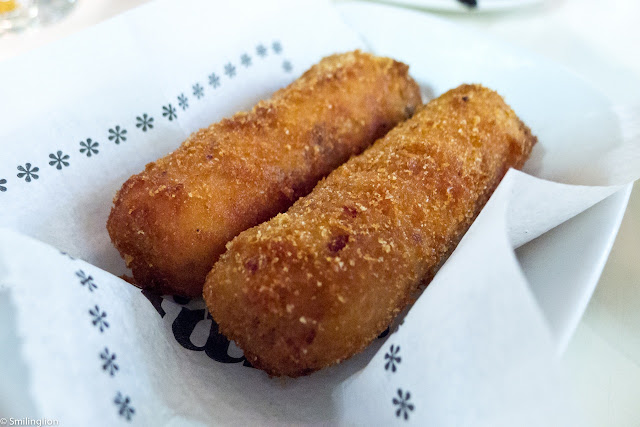 The bombas was nice as well (although we preferred the one at Paco Meralgo). 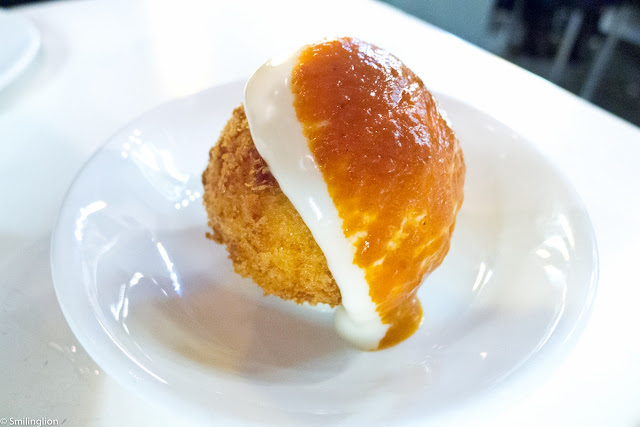 The squid ink paella took a while but was worth the wait. It was seasoned perfectly and cooked to the right doneness without being burnt. There was slices of squid on the top which was a nice accompaniment. 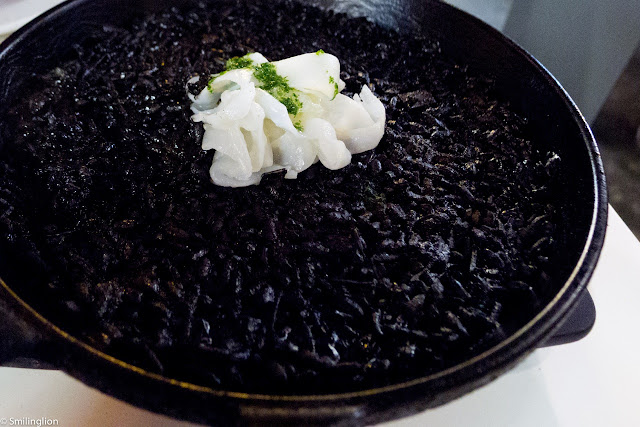 And finally, the grilled squid which was delicious. 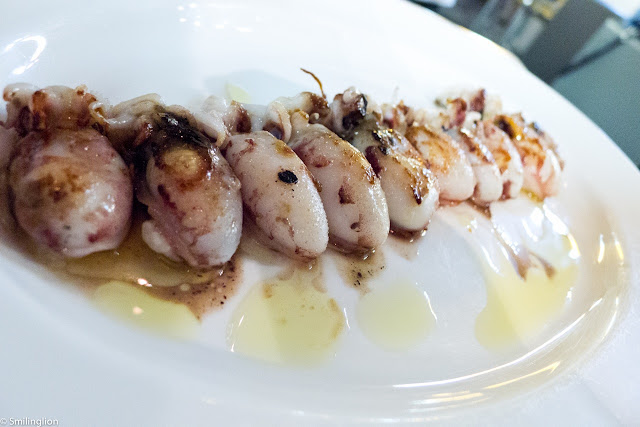 Final Thoughts: We thought the food here was very good, and given its prime location just off Passeig de Gracia, it was very easy to pop by to get a bite when taking a stroll along the main touristy areas (especially as they make a good coffee as well).
Posted by Smiling Lion