What makes people plan a trip which requires them to fly thousands of kilometers, then drive tens or hundreds more to an obscure and otherwise unheard of small village just to have a meal? For us, the answer to that was 'inspiration'. Just about a year ago, we read this post by a blogger we followed, which described his incredible meal at a restaurant in Spain of which we had previously not heard. Granted, Sant Pau was at that time already a three Michelin-starred restaurant but admittedly we were more focused on France and Italy as dining destinations. It was that post which lured our attention to the possibilities of expanding our horizons to the Iberian peninsula, and the one which inspired us to plan a whole vacation to Spain this year. Of the 20+ lunch/dinner reservations we made for Spain even before we booked our air tickets and hotels, this was the first we made, from which all the other restaurant reservations followed.

Restaurant Sant Pau is located about 50km from Barcelona, in a very small seaside town called Sant Pol de Mar. Owned and run by one of Spain's most prominent female chefs, Carme Ruscalleda, it is located in a charming semi-detached house with a beautiful back garden which overlooks the sea. Reservations are rather difficult to come by and we had to make our bookings months in advance We had a lunch reservation there and were lucky to have been allocated a table with a window view. After reading several reviews from diners who have been there, we wisely decided to forgo dinner that night so as to be able to enjoy a long leisurely lunch at a restaurant of such lovely setting. 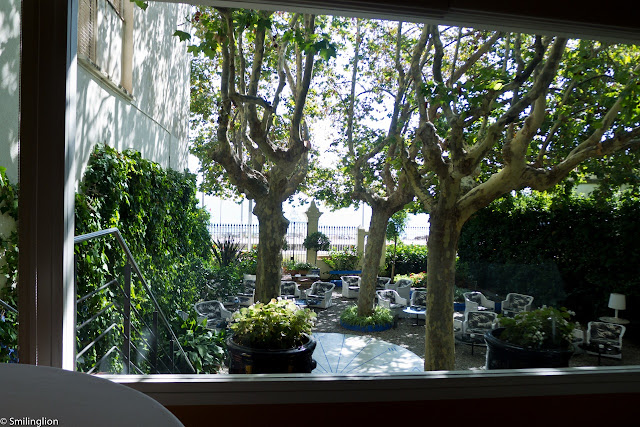 As we settled in with a glass of Cava and some bread, we were given some guidance on what to order and settled on the autumn menu (a daunting 12 course meal) and the wine pairing. We were also served a warm gazpacho which was very refreshing. 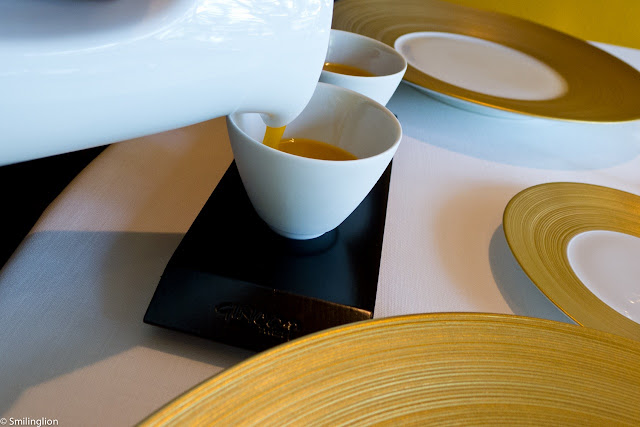 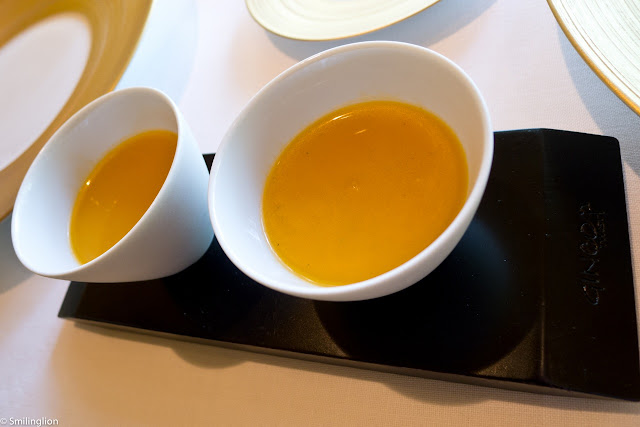 Our appetisers were 'Souvenirs of Mistura', which Chef Carme had brought back from her recent trip to Peru (Mistura was the international gastronomic fair held in Lima, Peru, just over a month ago). Each of the six appetisers were inspired by a chef and restaurant in Peru. 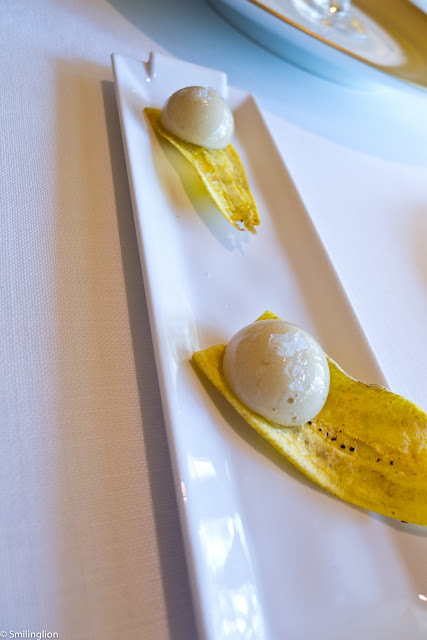 Ceviche de dorada y leche de tigre (bream ceviche and tiger's milk): Inspired by Gaston Acurio and Diego Munoz of Astrid y Gaston. This was cured sea bream soaked in its own marinade (don't think there was any dairy in it despite its name). It was very good. 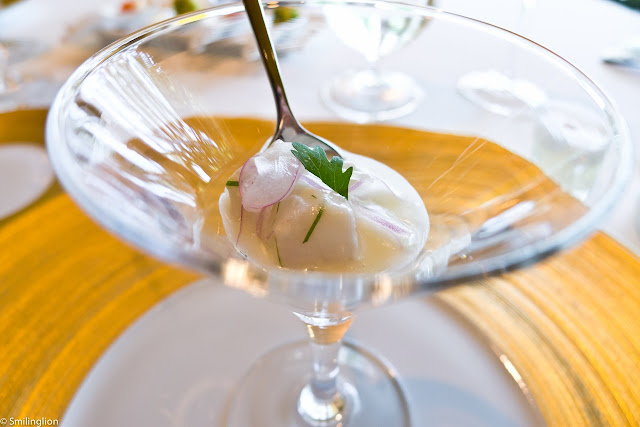 Pisco sour and sanguchito de chancho (pork sandwich): Inspired by Hajime Kasuga of Hache (the Pisco Sour) and Mitsuharu Tsumura of Maido (the Sanguchito). The alcoholic drink was refreshing but the sandwich was ordinary (perhaps it was too small for the flavours to make any impact). 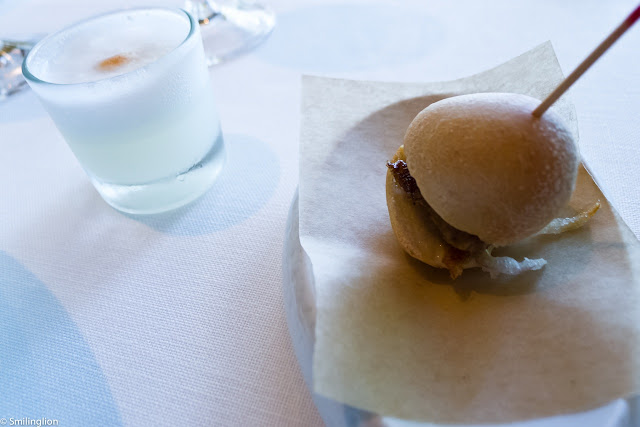 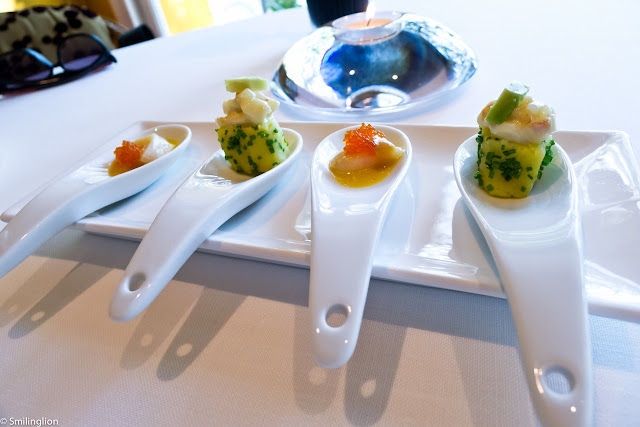 Then came the entrees proper.

King prawn, tomato and strawberries: The combination between the prawns, the fruits and the thick bisque really worked. This was an excellent dish. 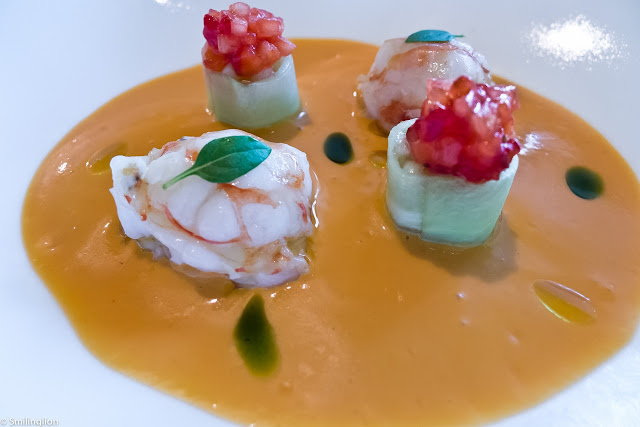 Crawfish tail under greens: This was also very good. It reminded us of a similar dish we had a few days earlier at Alkimia but this was much better. 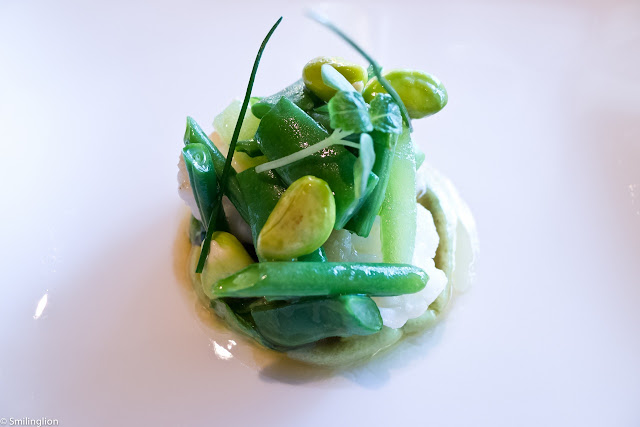 Autumnal cod brandade: This was a light and well executed dish. 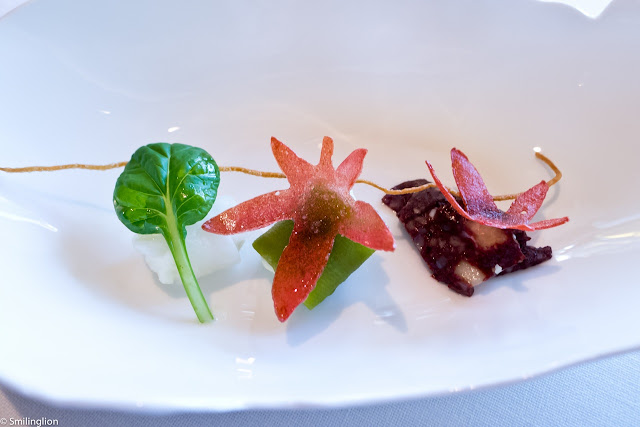 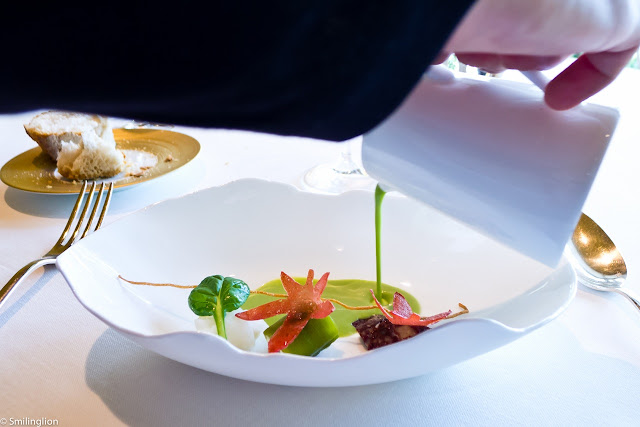 Squid 2012: This was amazing. The squid-ink sauce base was bitter and strong and really brought out the smokiness of the grilled squid. 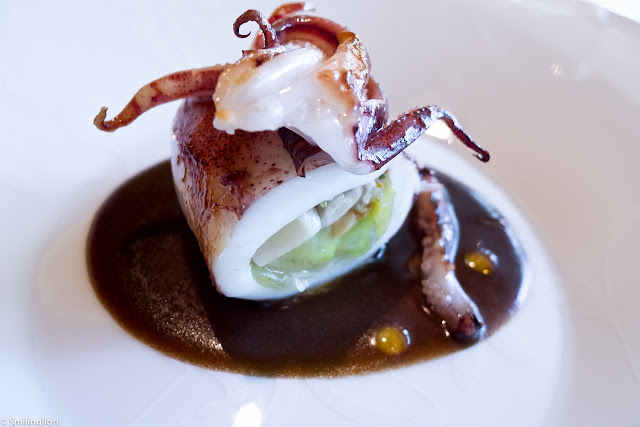 Cleaver Wrasse, curry and salmis: One of their classic dishes, they first brought out a raw parrot fish to show us before serving the actual dish which featured the deep fried version. This was a fish caught locally and looked more like an ornamental aquarium fish than one we'd expect on our plate. The dish was excellent though, the slight hint of curry flavour worked really well with the sweet flesh of the deep fried fish. 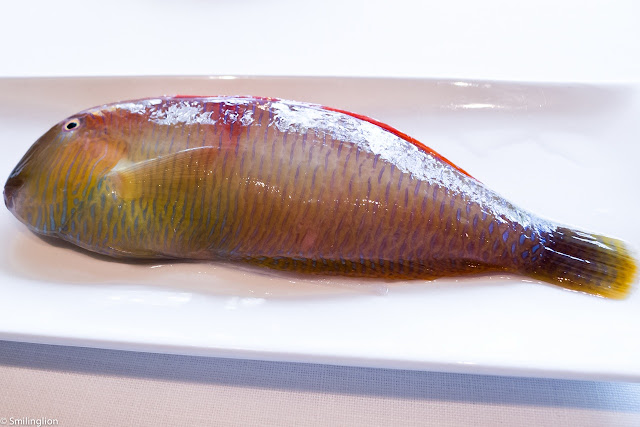 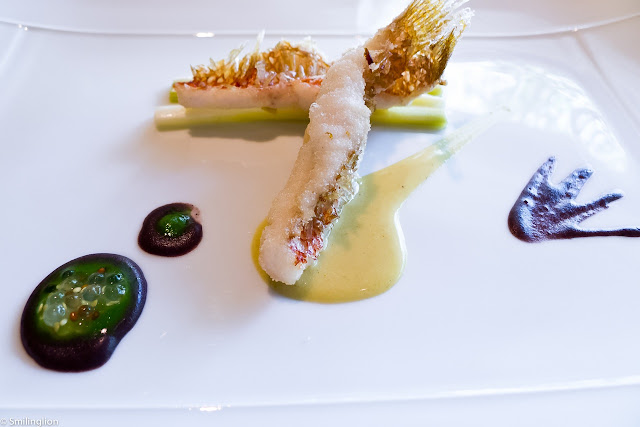 Pluma of Iberican pork: This was a nicely braised piece of pork. 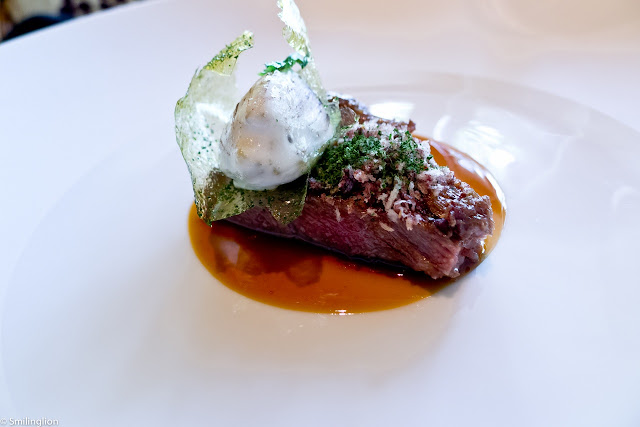 Challans duck and courgette flower: The duck and stuffed courgette flower was also excellent. It must have been a favourite as at the back of our printed menus was the recipe for the courgette flower. It must be the first time we have come across a restaurant giving out recipes of its dishes during the meal itself. 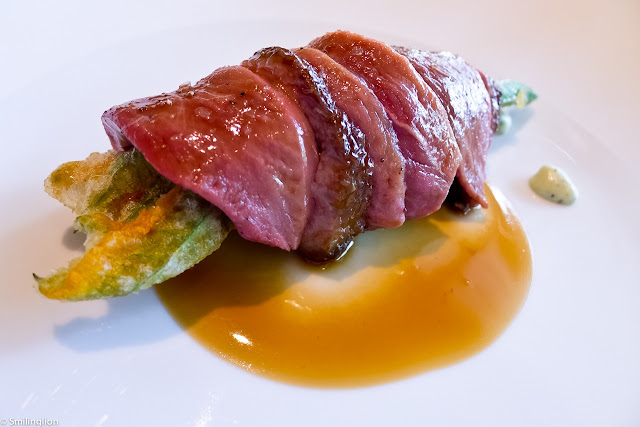 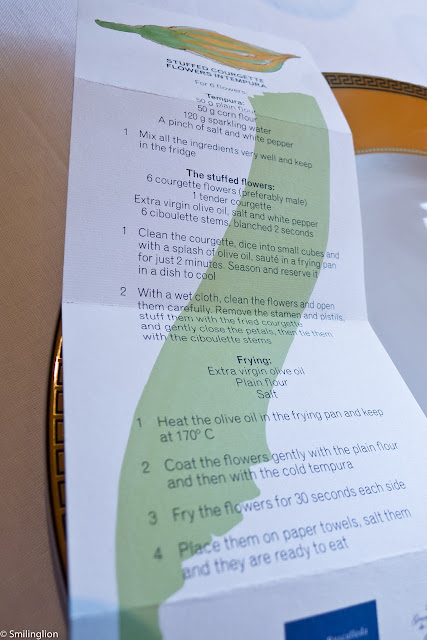 Gamoneu with figs, carquinyolis and anisette: A light cheese dish with only one cheese, a local one of the blue variety, paired with figs. 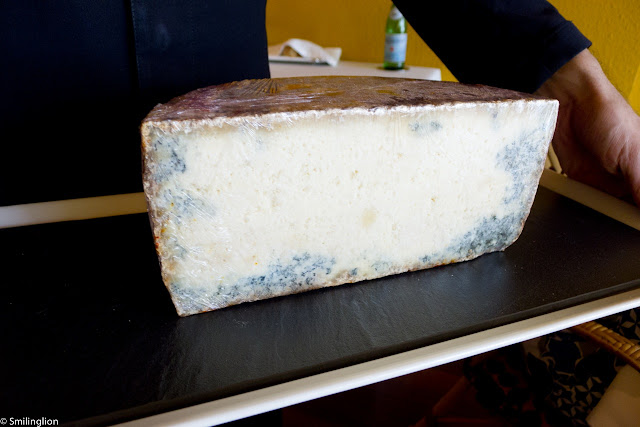 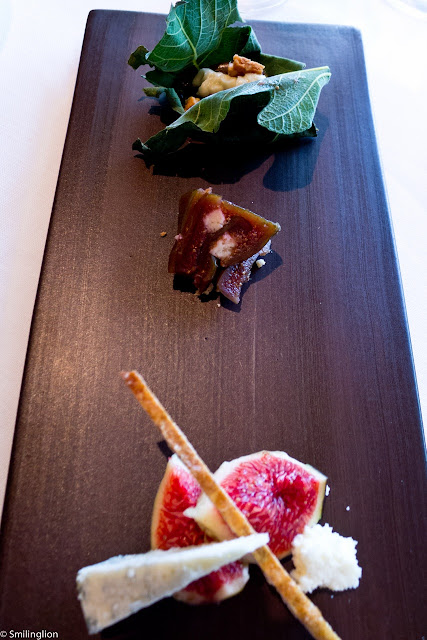 Aromes de Monserrat snow and thyme: This tasted as light as it looked. It was literally foam with a hint of thyme. 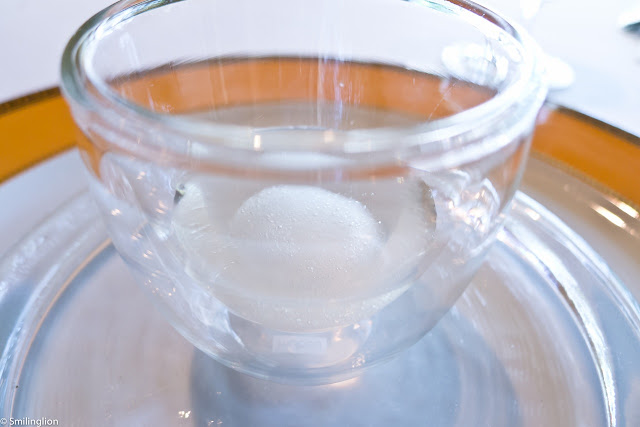 Tender almonds kiss: We really liked the almond mousse. It was surprising not sweet but was drizzled with olive oil, but despite the strong flavour of the oil, this dessert really worked. 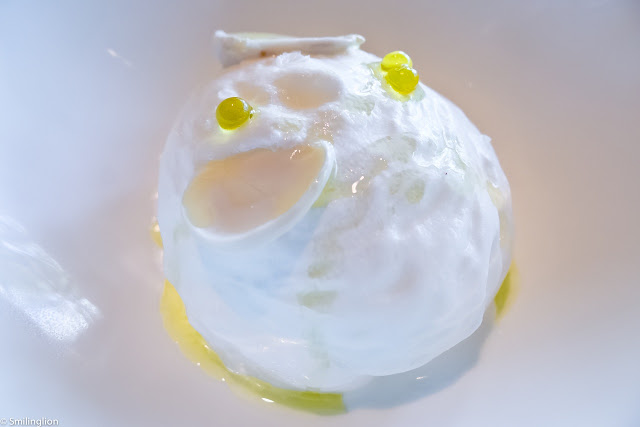 Transparent Cube: Of the 2 optional additional desserts, the cube of different fruit encased in jelly was probably the less exciting of the two. 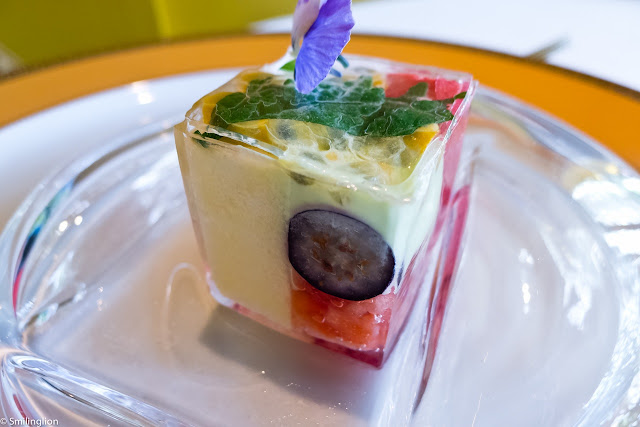 Nacre: The coconut was spectacular. It was simplicity itself, as it was just a thin layer of coconut flesh (how on earth did they manage to cut out such a consistently thin and squarish piece of coconut from a spherical interior of a coconut?) over sorbet. It was as good and as memorable as a similar dessert we had the day before at ABAC. 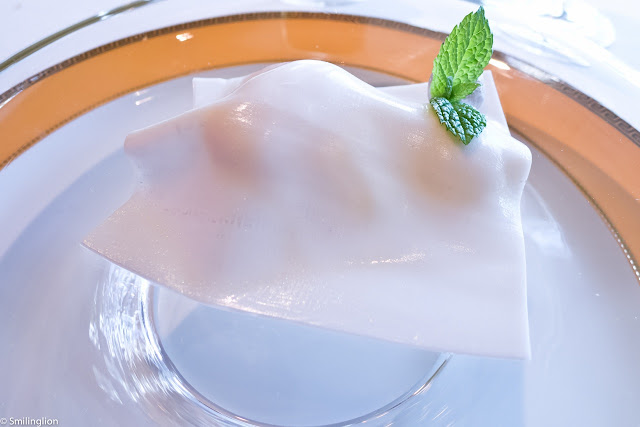 Chocolate, banana, dried nuts: The final chocolate dessert was plated over a glass box (in which there were dried leaves of various colours). It was good. 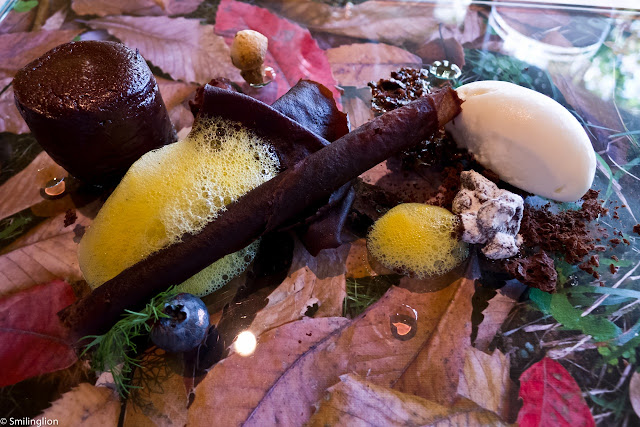 After we had finished our final dessert, we were invited to take our coffees/teas in the back garden. As we made our way down the steps to the garden, we were surprised to find that the kitchen was on the floor below and the chefs had a gorgeous sea-view from the kitchen (what a lovely work environment for them!). 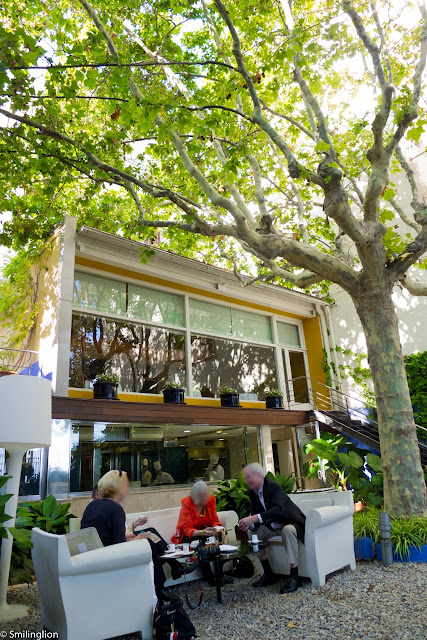 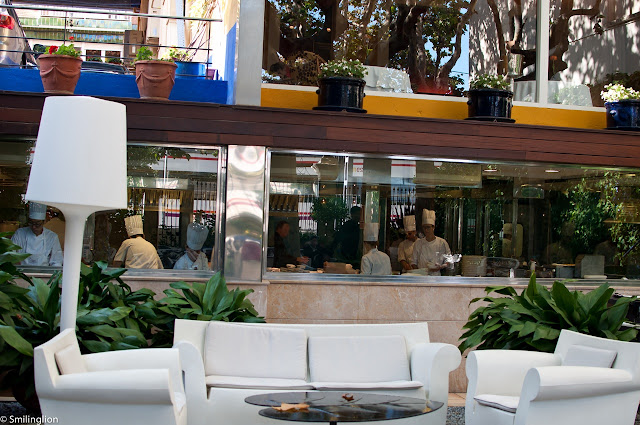 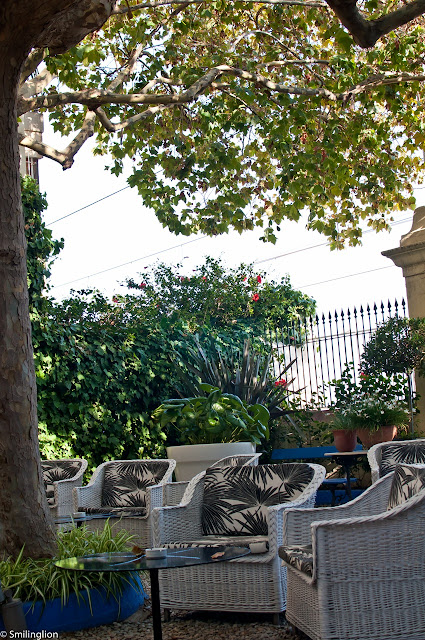 White chocolate, black chocolate, lemon swiss roll, puff pastry cake and pumpkin angel hair, limoncello jelly. raspberry crumble, liquorice and sherbet stick, coconut cookie, maple syrup and almond crunch: The weather was lovely and we lazed about the back garden, picking at the fantastic mignardises (which we finished) and enjoying the breeze and the sounds and smells of the sea behind. 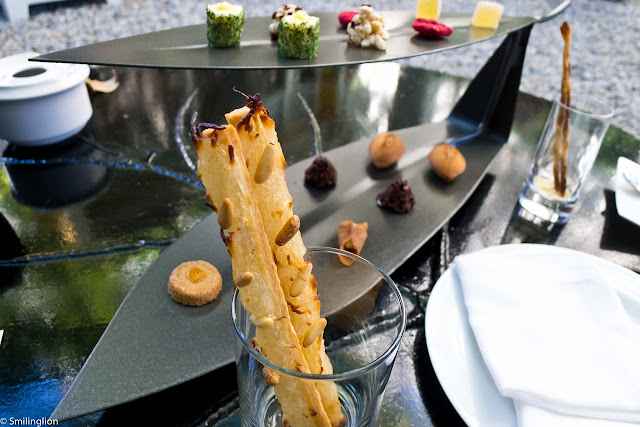 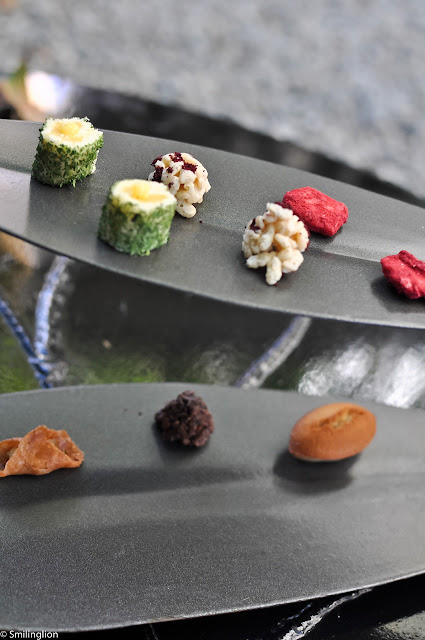 Final Thoughts: This was probably one of the best meals we have ever had. The food was exquisite and the service perfect, but what really impressed us was the utmost emphasis by Chef Carme and her staff on the dining experience of each of their guests, which was manifest in every minute detail, from the food, the printed menus (which was quite detailed and which we could take home), the table setting, the discreet yet attentive service, the brilliant wine pairing,  and the ambience and views. Despite it being a three Michelin starred restaurant, it did not have the haughtiness and self-importance normally associated with restaurants of such ilk, yet no compromise was made on quality. Chef Carme came out to greet us halfway through our meal. She was really charming and we appreciated her effort to speak to us for a while. Our lunch at Sant Pau (nearly 5 hours long) was a real example of what a meal at a top restaurant should be.