Ramon Freixa is a 2 Michelin star Spanish restaurant owned and helmed by the Catalan chef of the same name, located in the luxurious 5-star Hotel Unico in the very posh district of Salamanca in Madrid. The chef, having received one Michelin star at his restaurant in Barcelona (Raco d'en Freixa, which has since closed), then went one better when he opened in Madrid to some acclaim. His signature is traditional Catalan cuisine with a twist of modernity, in a setting which is stylishly grand. 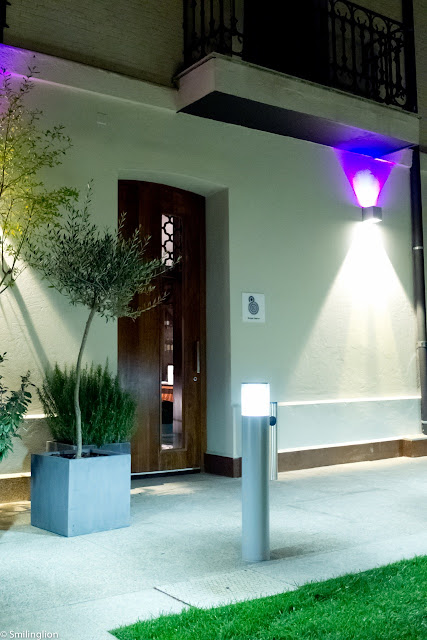 In that respect, the main dining room was quite small yet intimate, very elegantly adorned with large mirrors and lush drapes separating the main room from the private dining areas, and with the main centerpiece being a large screen at the end of the room showing a 3D image of the landmark district of downtown Madrid. We loved the interior and it gave us the expectation that we were in for a special meal. The service was crisp and professional, but slightly rushed we felt, as they started putting out the food almost immediately after we had seated and while we were still looking at the menu. We get slightly annoyed by that sometimes, as it makes it difficult to read a large menu properly when there are plates of food on the table in front of us. Despite the large lunch we had at DiverXo earlier that day, and at the encouragement of the waitress, we succumbed to ordering the Grand Menu. 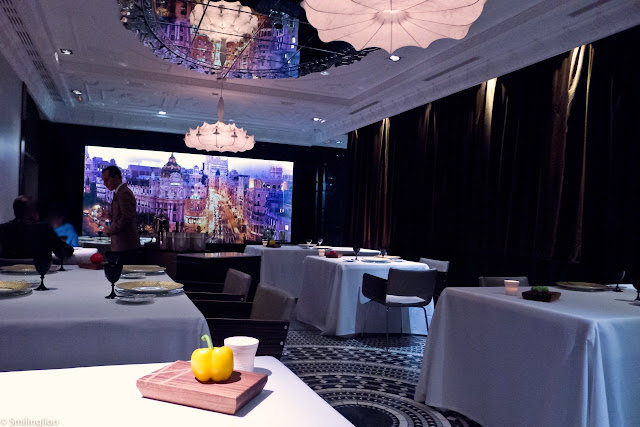 The origins: Bite-sized bread and chorizos were served when we were going through the menu and selecting our food and wines. After listening to the recommendations of the sommelier, we chose a bottle of 2007 Finca Dofi, a Priorat wine, which was good but a bit pricey relative to all the other wines we had in Spain thus far. 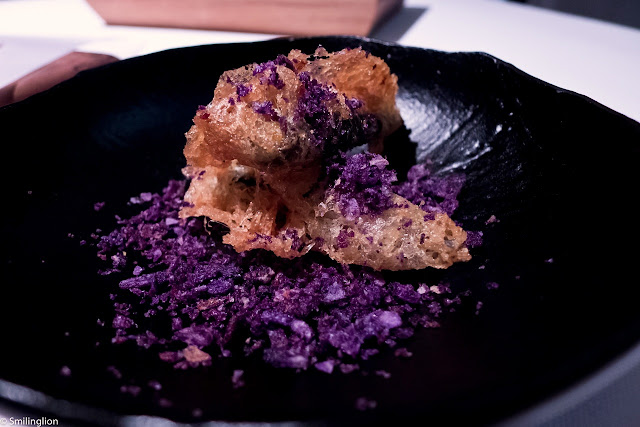 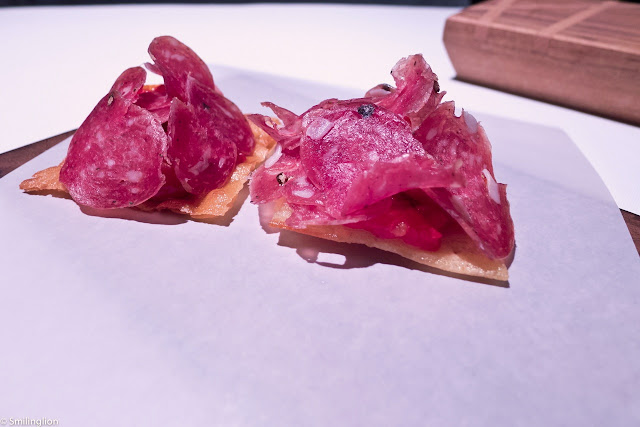 Lettuce heart with anchovies, onion and yoghurt cake, strawberry vinegar bay citrus fruits, black olive stone, apple foie, parmesan cheese and soya choux: The amuse bouche was a plate which contained a diversity of colours, flavours, textures and temperatures. It was interesting in that respect. 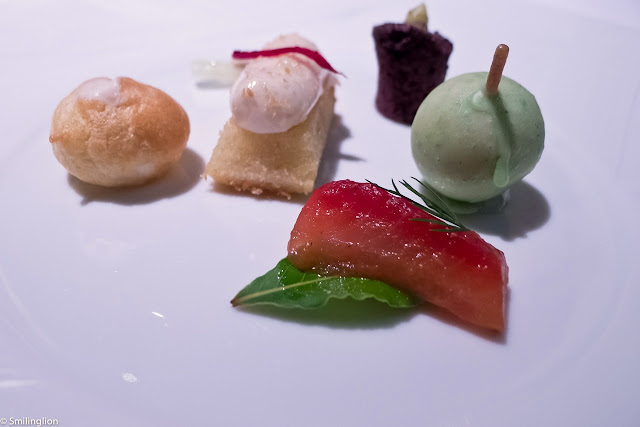 Squid and tasty soup: The first entree was very good and well executed. The squid was a continuation of a common theme throughout our Spain trip and was once again delicious. 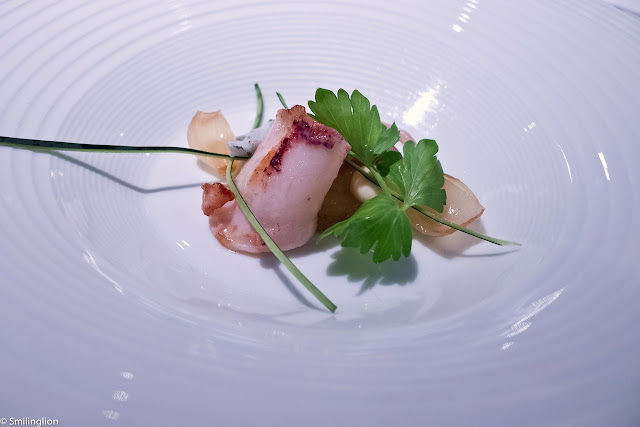 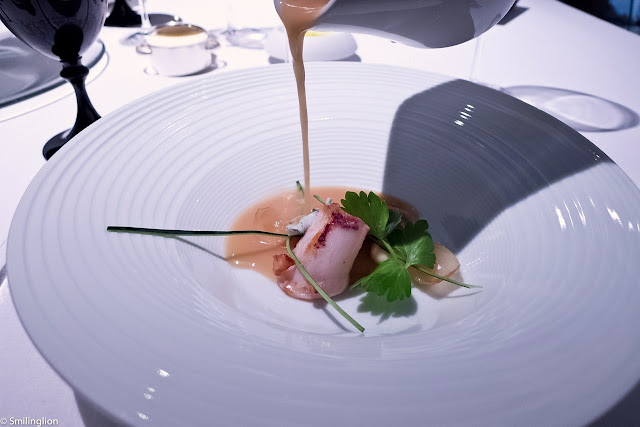 Tomato 2012 - tomato roasted into the wood of bourbon barrels, tomato tartare with beef carpaccio, light tomato soup with parsley ice cream: We didn't like this course. We generally like tomato but this was tomato overkill. Here was tomato done in four different styles but all we remembered was the overwhelming sense of sourness. We also didn't like the fact that there were so many small plates served in front of us at the same time. This made it slightly inconvenient for us to eat elegantly, as we needed to reach out to scoop food from a plate not in front of us and the table was too small for us to move plates around so that we could eat from a plate or bowl directly ahead of us. 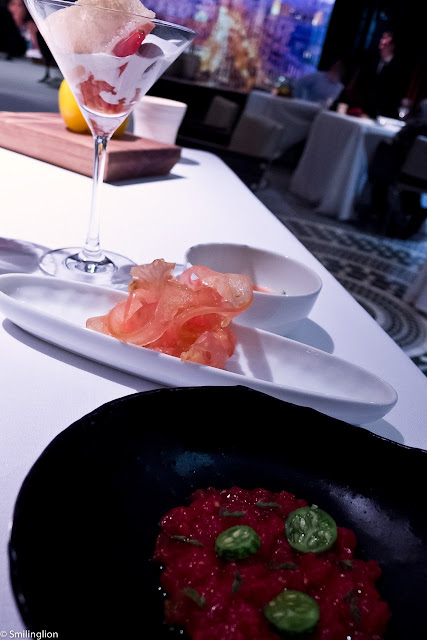 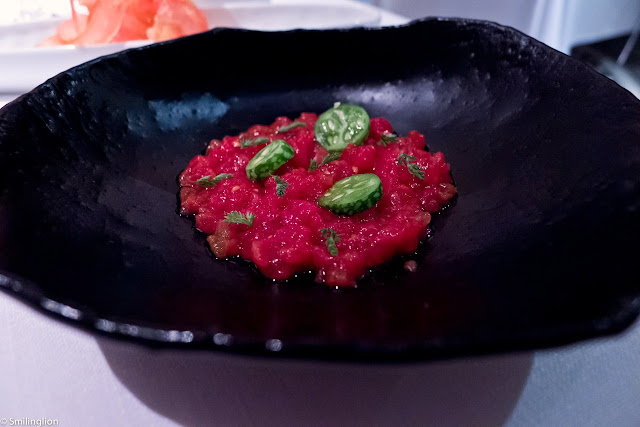 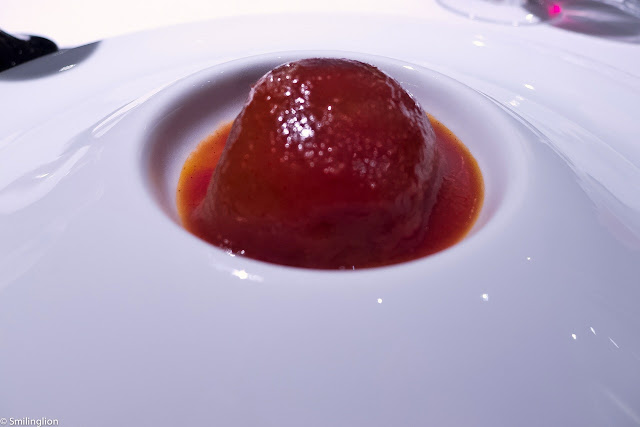 Mountain - rabbit back with noodles and garlic: We enjoyed this dish. The pasta was done al dente and  the very dry garlic sauce (more paste than sauce) had a flavour strong enough to temper the otherwise gamey taste of the rabbit. 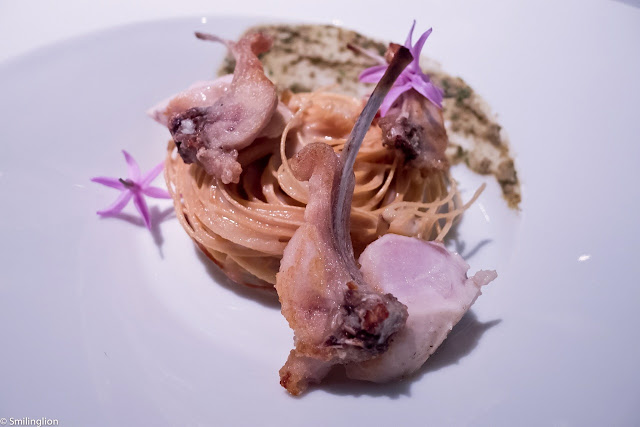 Sea - ray with spiced onions: This was a forgettable dish, we didn't really understand what this dish was about. 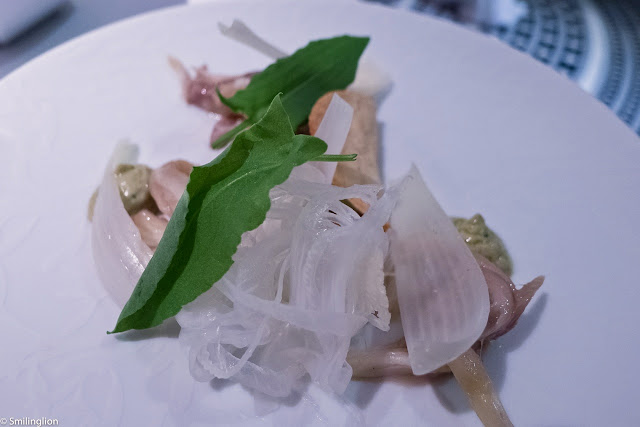 River - frog haunch with parsley: The frog and gnocchi were nice but the dish was too small and could have done with bigger portions. 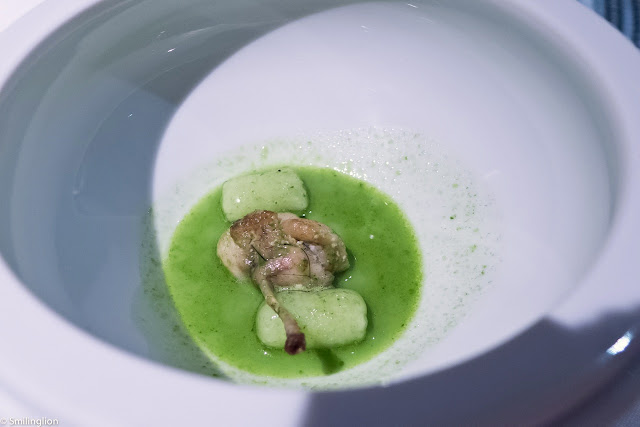 Fried monkfish, cultivated mushrooms and toasted butter, the almond, fennel salad: The monkfish was the best dish of the evening. It was breaded in the style of 'fish and chips' but the flesh was juicy and sweet. It felt slightly casual in comparison to the rest of the dishes and the setting of the restaurant, but it was very good nonetheless. 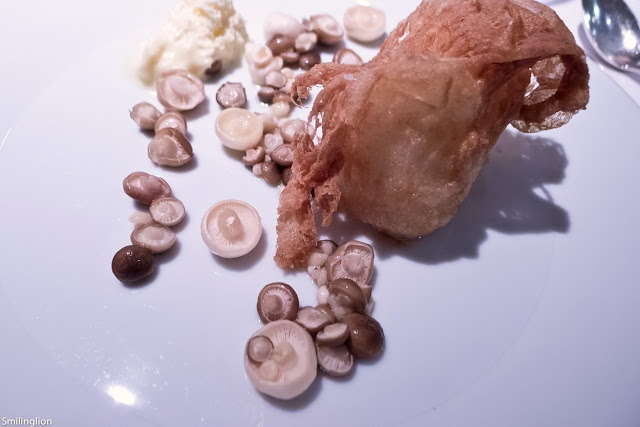 The almond 'tart' accompanying the monkfish was served in a separate plate. We thought it was tasteless and didn't understand it. 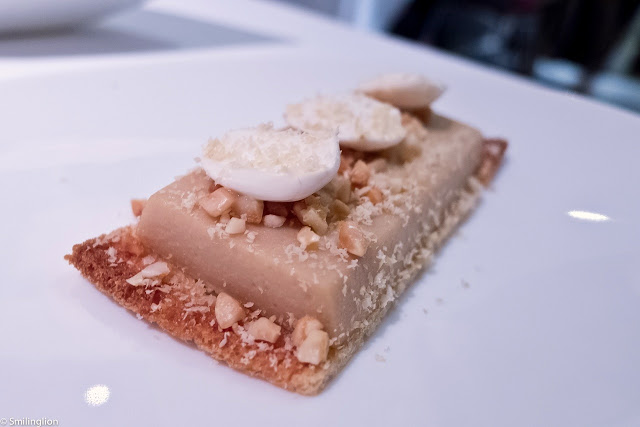 Similarly, the fennel salad also came in a separate plate, and tasted more like garnish than deserving of a plate of its own. 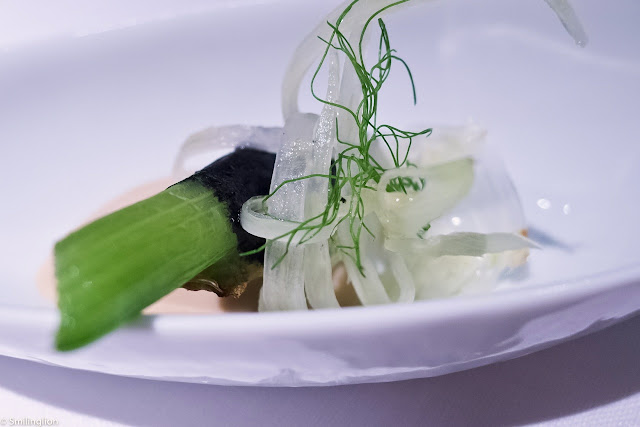 Lamb shoulder roasted with sobrasada and honey semolina, puff pastry with confit peppers, pisto Gaudi, green bean carbonara: The lamb shoulder and accompanying cous cous was quite good, but once again the course was over-cluttered with separate plates of other unremarkable food. We just could not understand why for each course, everything couldn't be served on a single plate, but instead, the chef had to distract us by putting so many plates of food in front of us at the same time, and what's worse was that all the dishes didn't even have a discernible common theme. 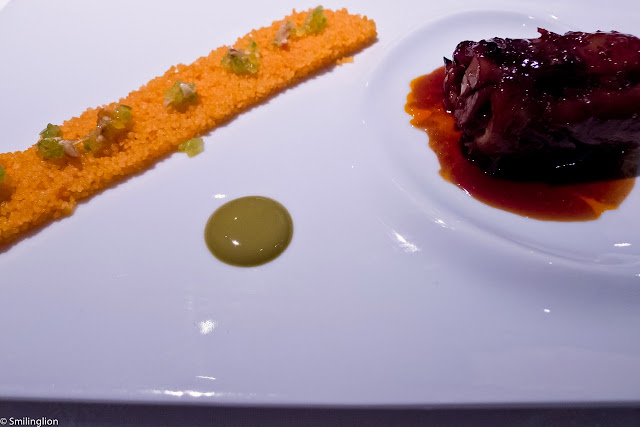 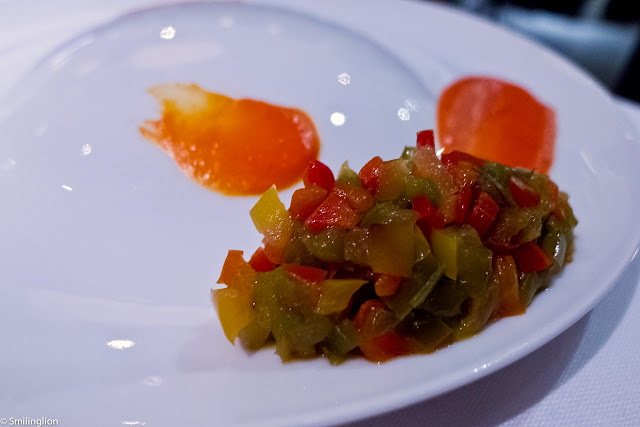 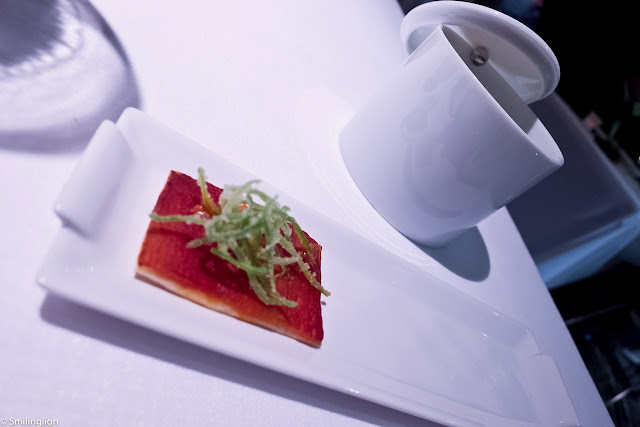 Cooked cheese selection, Tou dels Til-lers creamy with pear and passion fruit, Bauma Carrat with mushroom and spicy marzipan, Torta de Pascualete into a prune with wine and pine nuts, Stilton croquette with chocolate: Give us a proper cheese platter any day, and not a procession of cheese derivatives which in this case, did not impress us. 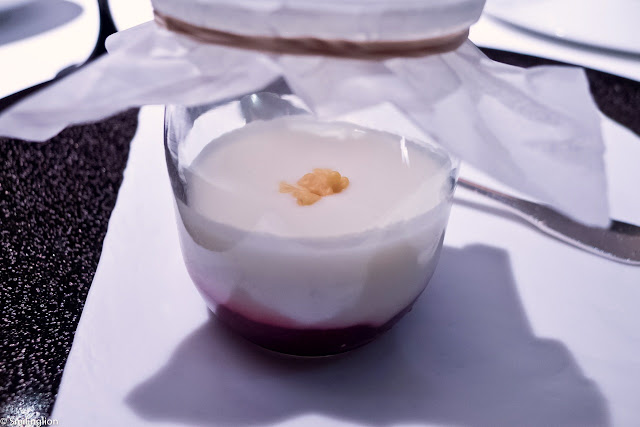 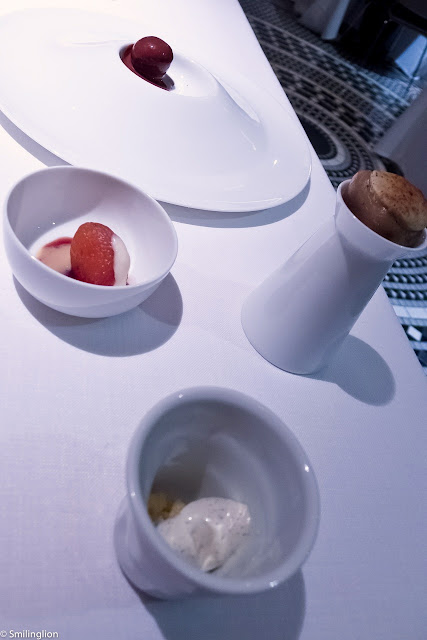 Sacher cake, tutti frutti jelly, chocolate shot with passionfruit, golden apple, chocolate muffin, lavender panna cotta, strawberry filled with green tea: As it turned out, the mignardises (served before desserts in this case) were so much more memorable than the desserts themselves. 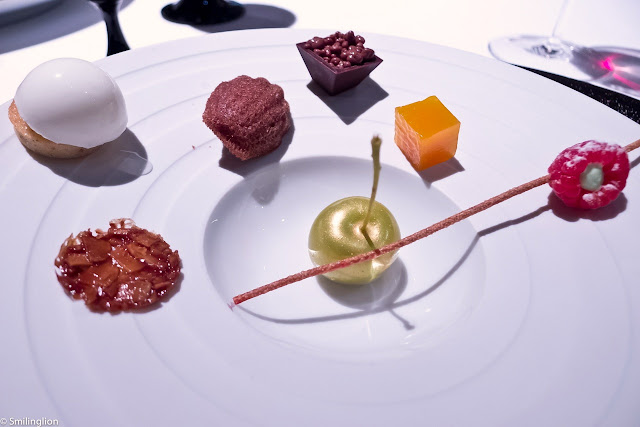 Frx x 5 Momento Dulce: There was a giant macaroon and roasted pineapple which we really did not like it. Everything else was very ordinary. This was probably one of the very few times when we did not finish the dessert course, and it was also one of the most disappointing dessert courses we have had in a restaurant at this level. 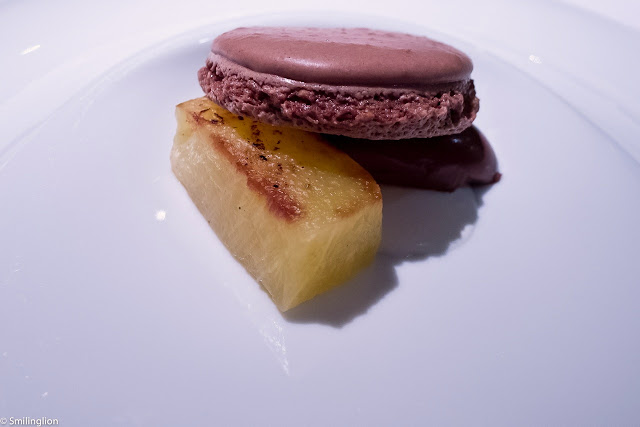 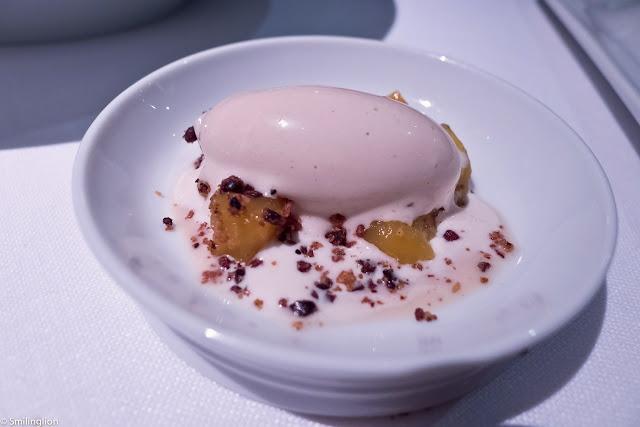 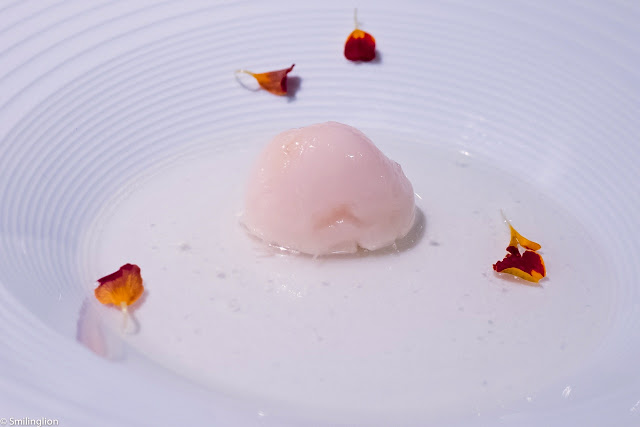 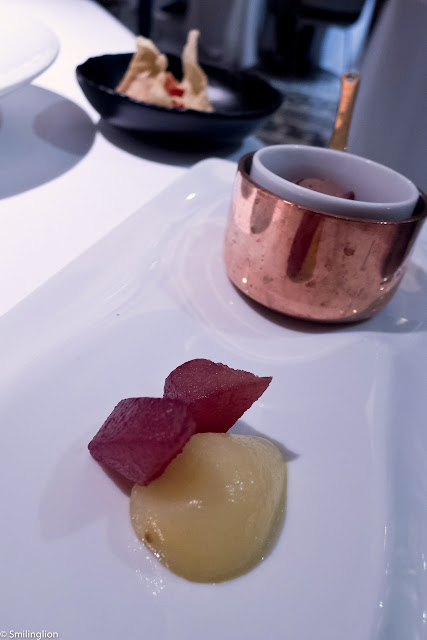 After our meal, we took our coffee/tea and finished our wine out in the inner courtyard. It was a cool and pleasant night, and we were able to relax and unwind under the stars while slowly digesting what was a very heavy dinner. 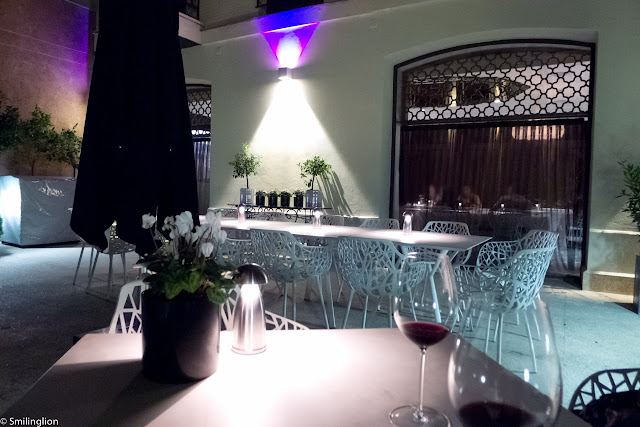 Final Thoughts: What started out as quite a promising meal got progressively less so as the night wore on. We just could not understand why the restaurant had to serve us so many different plates of food at the same time (and many of which did not even go well together). It just felt like a very uncoordinated effort and that the chef just wanted to smother us with a large variety of food. The interior and the setting of the restaurant were lovely and the service good, and we really wanted to like this restaurant, but it was ultimately a rather disappointing meal. Some dishes were very good and but there were just too many ordinary dishes (many of them side dishes) which tarnished our impression of our dinner there.
Posted by Smiling Lion