On our drive between Madrid and San Sebastian, we couldn't miss a visit to the famous wine region of Rioja, which straddles the states of Basque, Aragon, Navarre and Castilla y Leon and sits on a plateau of high altitude, where the noble Tempranillo grape thrives in the dry and arid environment. We were surprised by the desert landscape, as we would have expected a more green and fertile land for such a major wine region. The scenery was beautiful though, with the area surrounded by mountain ranges and small hamlets springing out around old churches. 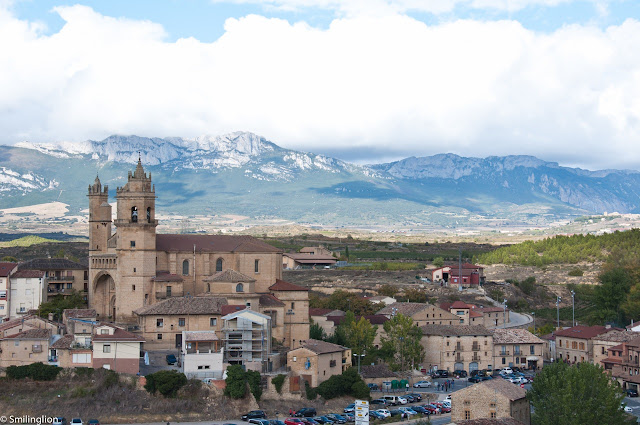 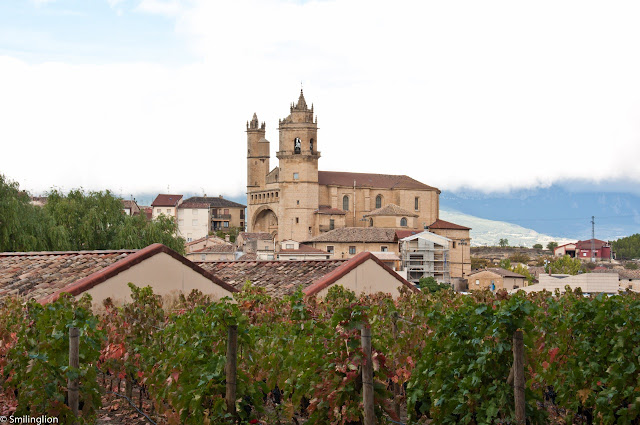 Nestled in the heart of Rioja country, with its curved and shiny steel structure dominating the landscape, is the Marquis de Riscal Hotel and Restaurant, an establishment which is part of the renowned wine producer of the same name. Designed by the famous architect Frank Gehry, it is incongruous with the ancient surroundings yet daring in its design. The five star hotel is a member of the Starwood Luxury Collection and the one Michelin starred restaurant is helmed by young Chef Francis Paniego. We didn't have the privilege of staying here this time but was certainly looking forward to lunch at the restaurant. 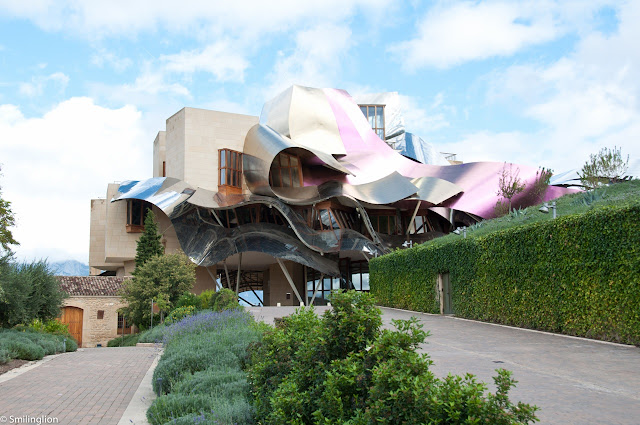 In line with Frank Gehry's tendency to shock the senses, it was no surprise to us that the interior of the restaurant was all red, with acute corners (which actually served the purpose of creating many private dining spaces) and unsymmetrical windows. It was a no-brainer for us to order the 'in-house' wine, and we picked the special anniversary edition of the 2001 Reserva produced by Marques de Riscal. 2001 being one of the best vintages for the Rioja wines, this bottle didn't disappoint, and furthermore was a steal at EUR50 only. 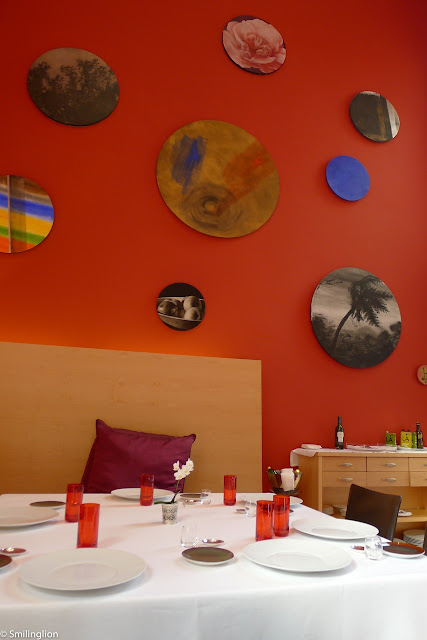 Seed tile and black olive bread: The seed tile was amazing, it was sunflower seeds on a thin breadstick and we couldn't have enough of it. 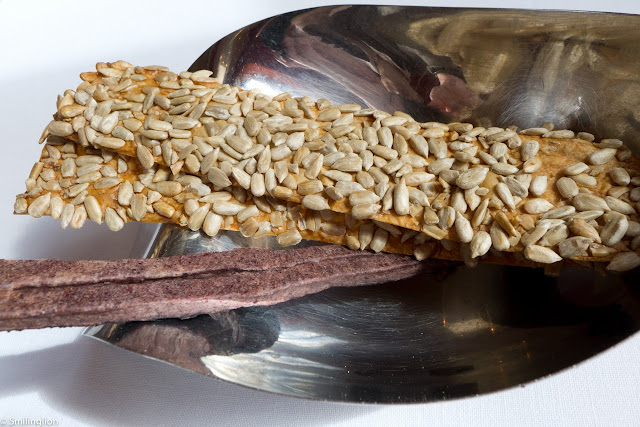 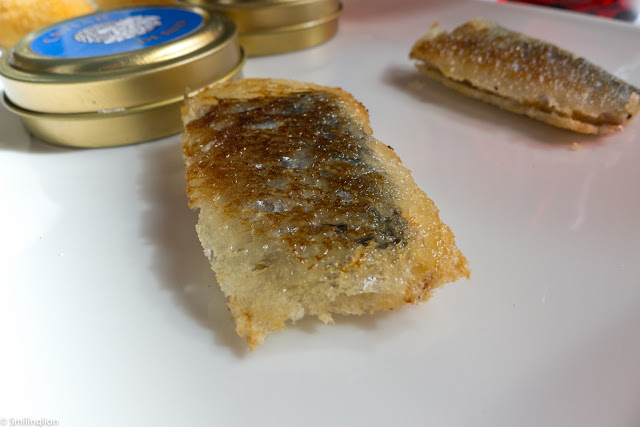 Tomato juice presented as a small beer, the "Eschaurren" croquettes: This was a unique take on the clear tomato essence, as it was frothed like beer. The croquettes were a classic tapas dish which was also very good. 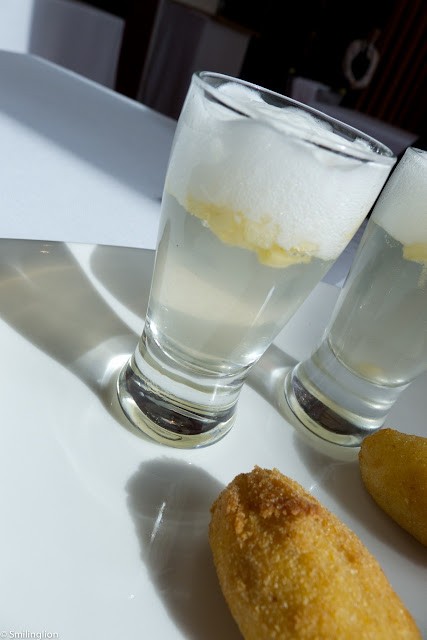 Red wine caviar: The red wine cavier on a bed of foie gras was a brilliant appetiser. 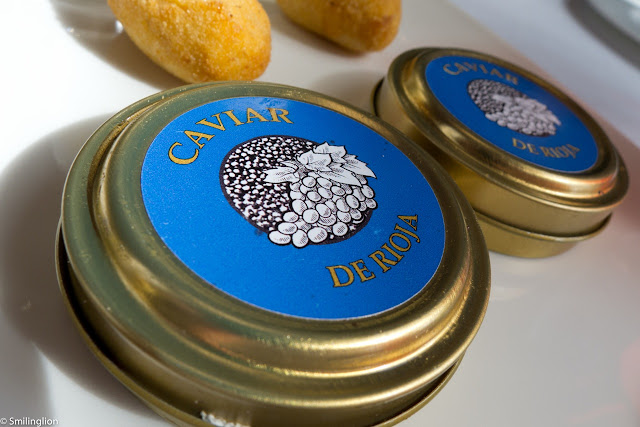 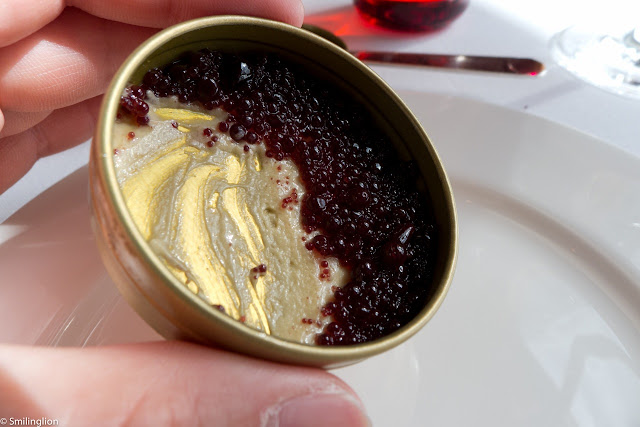 Red shrimp carpaccio over a tomato tartar and white garlic sauce: The combination of the three layers (garlic, tomato and raw shrimp) topped by some red wine caviar was quite inspired. 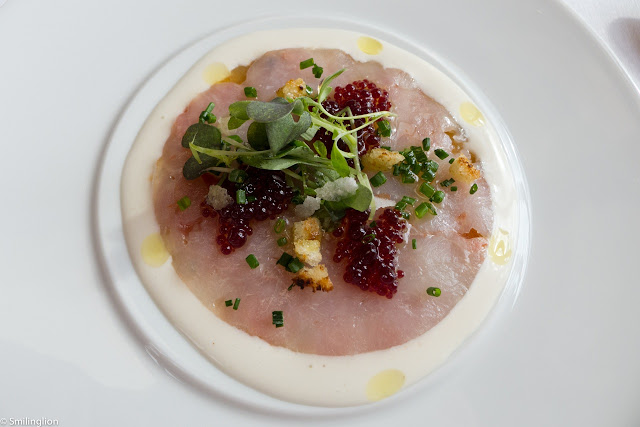 Under a dry leaf blanket (representing a walk through the forest): This was an earthy dish of mushrooms and a variety of ground herbs. It was very well put together and was a good representation of the name of the dish. 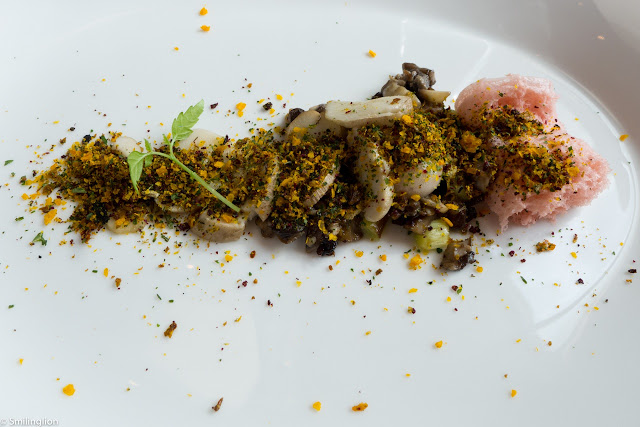 Galician lobster with roasted leek and its own clarified broth: We thought the clear lobster broth was interesting and it complemented the lobster and leek well. 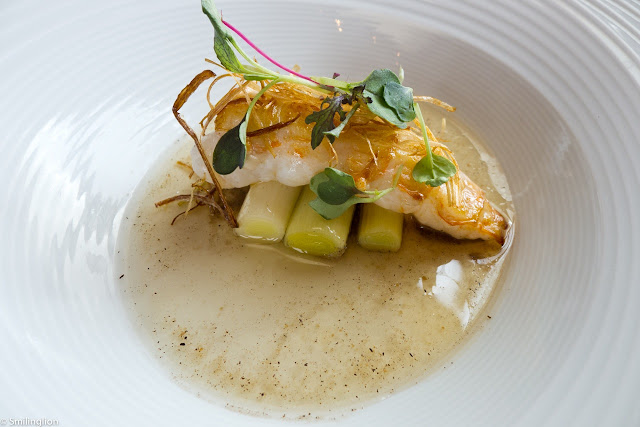 Ghery's farm egg - Candied crystal peppers, farm egg coked at low temperature and gold pepper's nectar: This was poached egg with candied sheets which were of the colour scheme of the building. 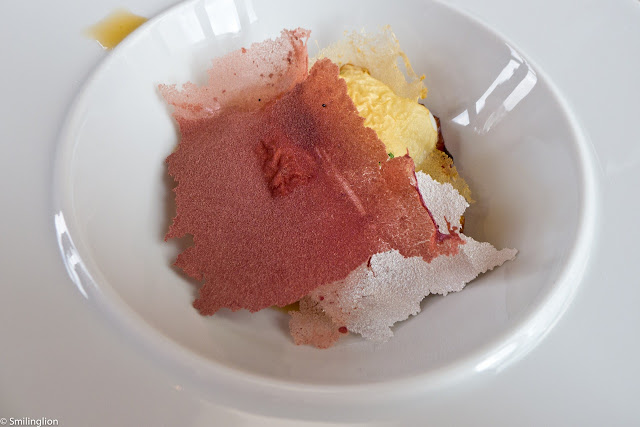 Phi-phi cod, over candied green pepper and onion with pasteurized yolk: This was a decent fish course, although we felt that it was a bit too mushy and lacked structure. 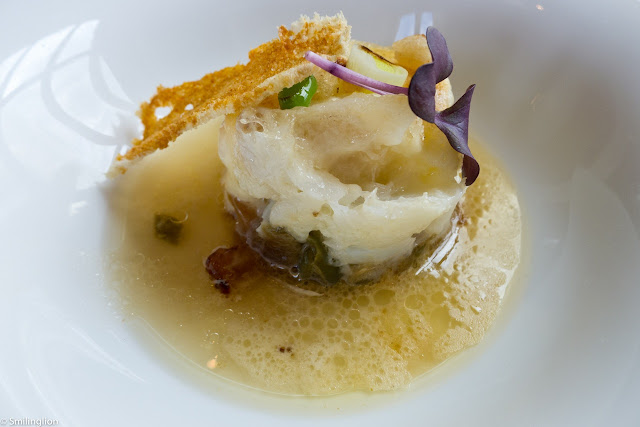 Roasted young pigeon over pear and lime concasse: The pigeon was good but we felt the fruit pieces were a bit too tart and slightly overpowered the meat. 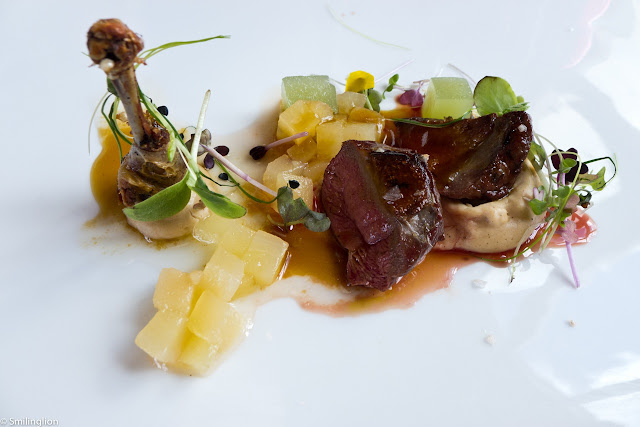 Mojito with banana and mint: Lime and mint sorbet which was refreshing. 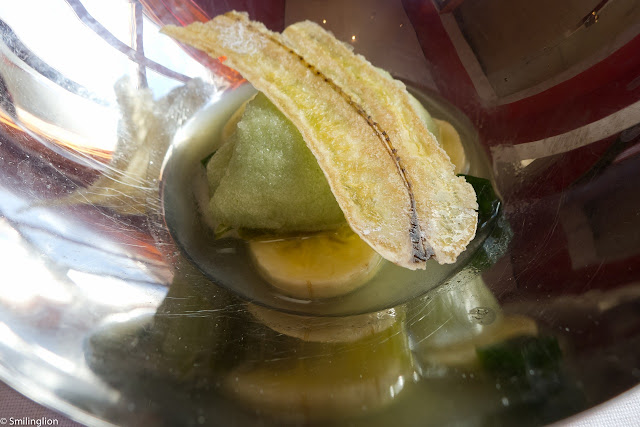 Sweet toast with "Cameros" cheese, green apple and honey ice cream: This was an amalgamation of the cheese and dessert courses, and it worked quite well. 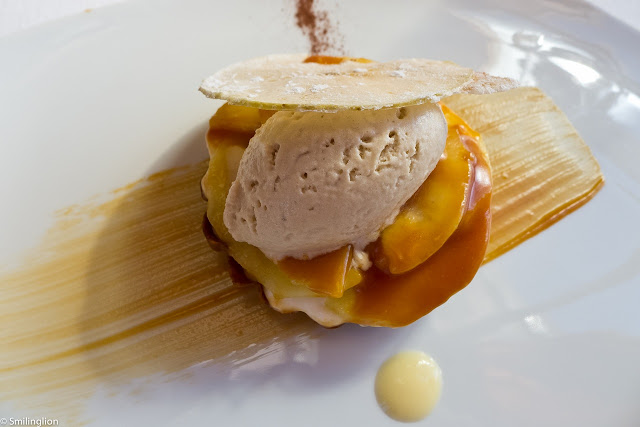 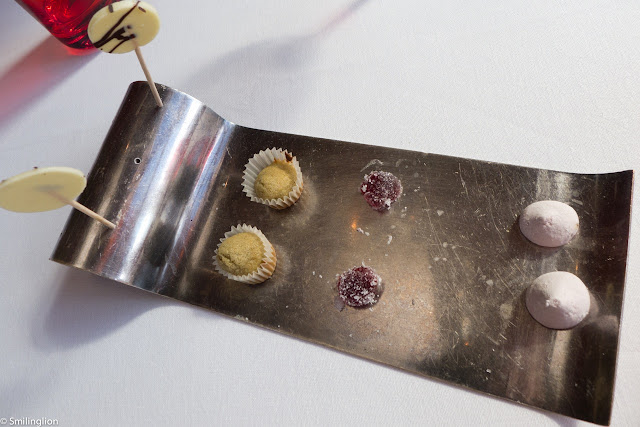 After lunch, we were brought upstairs to the rooftop terrace to enjoy our coffee. The views from the roof of the countryside were spectacular. 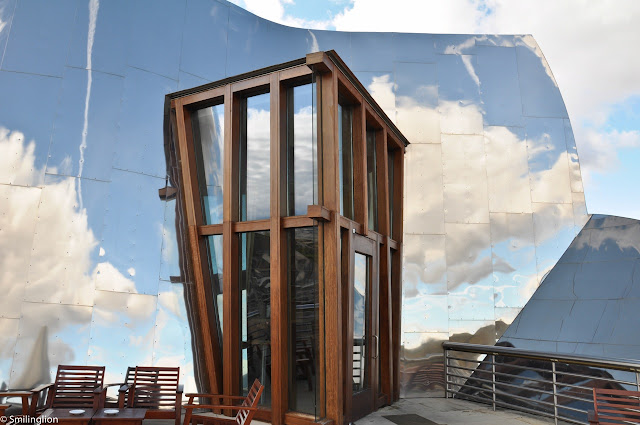 Impressions: It was a very enjoyable meal, and though the main courses were less impressive than the appetisers, overall we thought the quality of the cooking and the excellent service we received that afternoon were of a high standard. It was quite an experience dining in such a landmark of cutting edge design, in an otherwise desert-like area sparsely populated by old towns and dusty roads. A stay at the hotel will definitely be in our agenda the next time we are here.
Posted by Smiling Lion