Update: DiverXo won it's third Michelin star in 2014 and has changed premises.

Buried in a leafy suburb of central Madrid is a highly acclaimed fusion restaurant which is notoriously hard to get a seat in. They start taking reservations only a month prior and the tables go fast. Having read rave reviews about DiverXo, we were determined to eat there and camped out at their website till they starting taking reservations for the date we wanted, and within minutes managed to secure our table for lunch.

From what we had read, Chef David Munoz is renowned for his Spanish-Asian fusion cuisine, and in a departure from the more established French-Japanese fusion styles commonly found nowadays in top restaurants throughout the world, Chef David attempts to do fusion with a variety of Asian cooking influences. Being Singaporean Chinese with a passion for our own local cuisine, we were a bit skeptical about that, having no good experiences with similar experiments in previous meals we have had in other restaurants. In fact, when we arrived at the restaurant (it can be quite hard to find), the exterior and interior reminded us of the tacky decor of a ubiquitous Chinese restaurant in London or New York (deliberately so, we surmise, as part of Chef David's humour). When we were seated, we were surprised to find chopsticks on our table, which led to our dawning realization that we were about to pay significant money for a Chinese meal cooked by a Spaniard in a two Michelin starred restaurant in the middle of Spain. 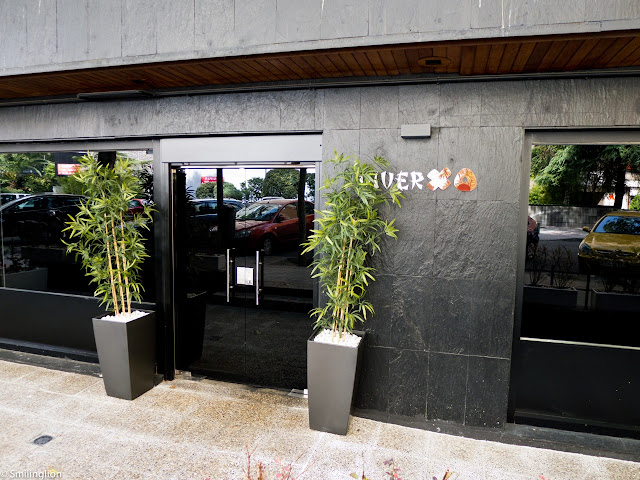 Another quirk about DixerXo from what we had read was that they forbade photography in the restaurant, which is why we were prepared to go for the meal and leave without any photos to remember our meal by. However, when we were there (the restaurant was full for the lunch seating), the local diners were happily snapping away with their giant SLRs (even using their flash) with nary an objection from the staff, so we thought it acceptable to take photos with our iPhone as well (we weren't prepared to take photos with our usual camera because we didn't expect to be able to take photos at all). Fortunately the lighting in the restaurant was good and so the photos taken with the iPhone turned out alright. 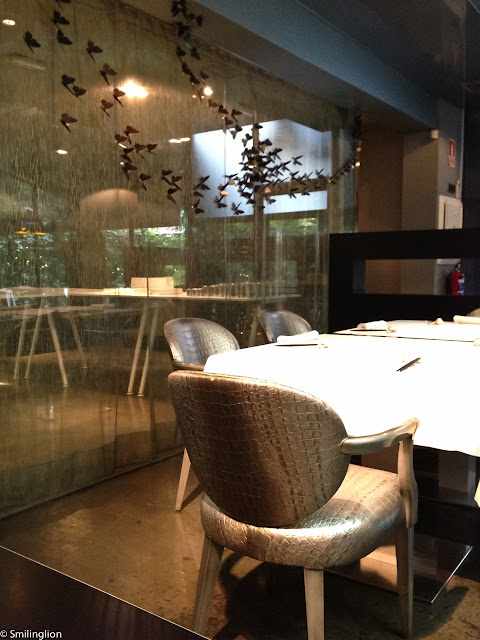 There was no a la carte menu at DiverXo but three tasting menus of different sizes. We opted for the second one of nine courses (the smaller one had seven and the larger one eleven, as we recall). As an amuse bouche, we were served a plate of edamame and jalapeno, which we were expected to share and eat by hand. This was a very classic Japanese snack (but with the twist provided by the jalapeno sauce and ground pepper), and was very addictive and fun to eat. 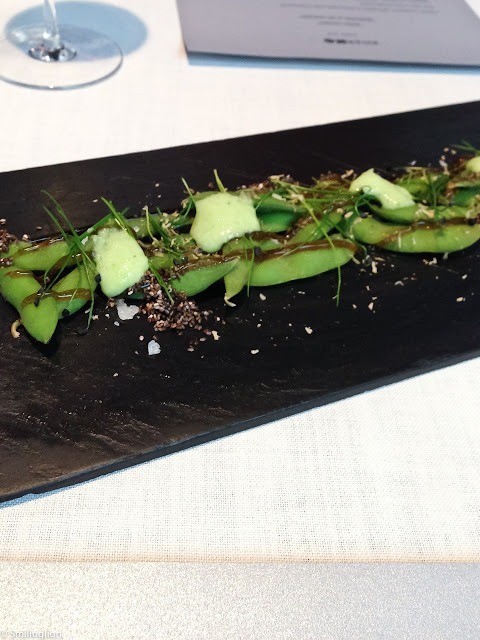 'Laksa' with scallops, sea urchin, chickpeas, clams, egg roe, accompanied by crispy fish bones, frogs legs in paprika, 'ikan bilis' and 'keropok': We were surprised that our first course was a staple from our home country. Laksa is a Singaporean/Malaysian favourite and is a noodle soup typically made with coconut milk and curry. In this case, DiverXo served it in a half coconut shell and added ingredients such as chickpeas, scallops, sea urchin, clams and egg roe (none of which are found in the usual laksa). Recreating a traditional dish like that has it pitfalls and my wife didn't like it very much (she is a big fan of laksa). I on the other hand, don't like laksa that much (and consequently am not that familiar with it) and so I thought Chef Munoz's take was quite nice. A metal spoon was provided to scoop up the coconut meat from the husk and eat together with the curried coconut milk and other ingredients, and they all tasted great together. Maybe if Chef Munoz didn't name this dish 'laksa', both of us would have enjoyed it more. 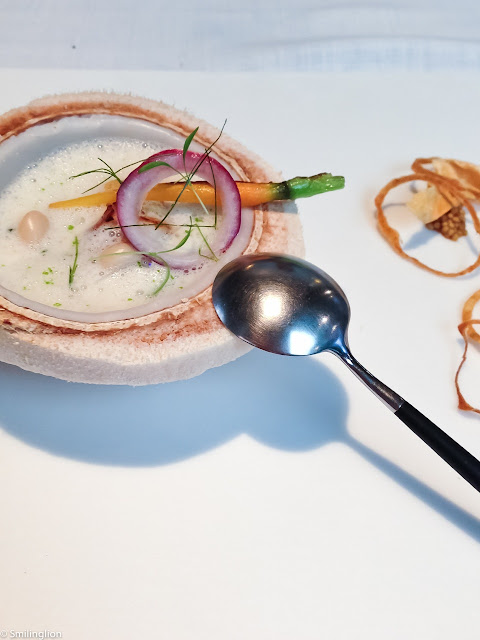 Accompanying the laksa were a few other pieces of food. The paprika frog legs were good and the deep fried fish bones, ikan bilis (deep fried anchovies) and the keropok (fish/prawn crackers) were also traditional Singaporean/Malaysian snacks. 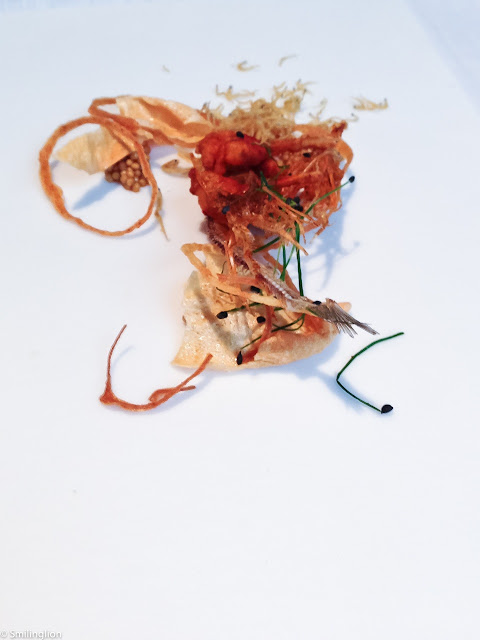 Potato balls, mussels, miso and uni: The next dish was Japanese-influenced. The potato balls were made with the brown bean paste (miso) and these went spectacularly well with the thick uni (sea urchin) reduction and mussels. It was a fantastic creation. 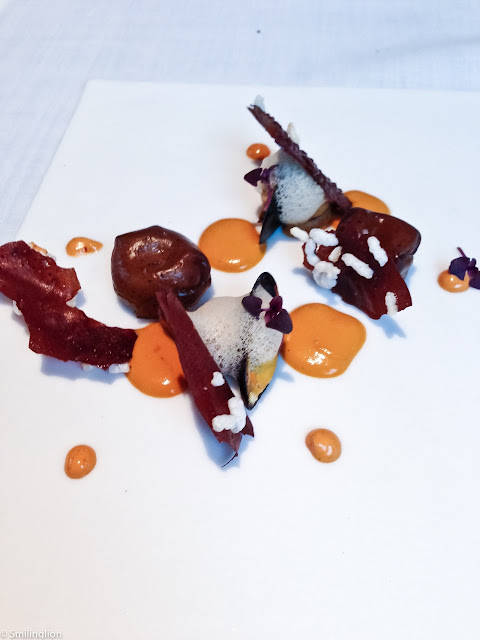 'Dim sum' 'otak-otak' with Thai curry, shrimp with beer foam, crest of guinea fowl and prawn head with beer foam: In this dish, the otak-otak (spicy fish cake typical in Singapore/Malaysia) was wrapped in a very thin skin like a Chinese 'har gao', and accompanied by a thai red curry sauce and a piece of shrimp with beer foam on top. It was very good. Impaled on a metal pike was a crispy and deep fried crest from a fowl (apparently a local delicacy) and in a separate cup was the prawn head which we were supposed to pick up and suck the juices out from (not sure if they do this in Spain but it is something we do back home in Singapore). Overall, the dish was very clever and very good. 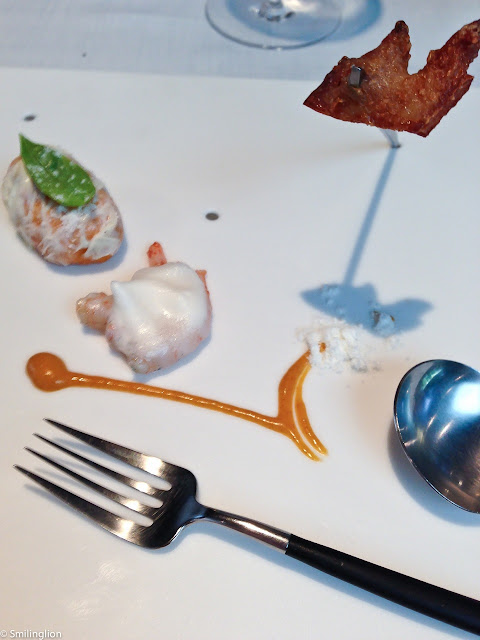 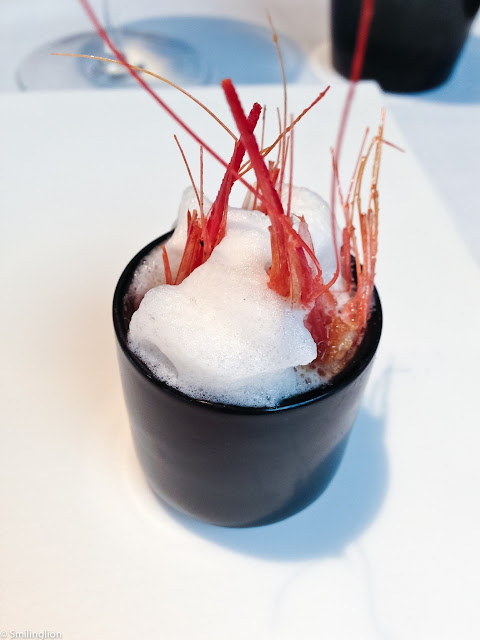 Baby squid in strawberry kimchi: Now on to Korea. The traditionally grilled squid had a sauce of pickled strawberries in the style of the Korean kimchi. It was the first time we had encountered this flavour-pairing and it worked really well. 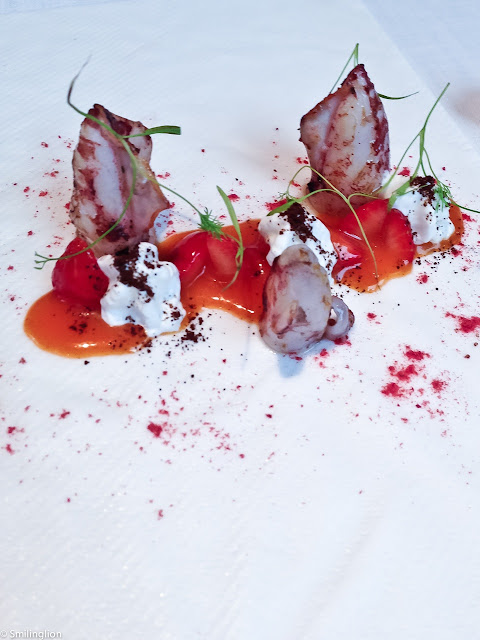 Smoked bonito: A fish commonly found in Japanese cuisine, the bonito (a kind of mackerel) was beautifully smoked in this case. It was an excellent main course. 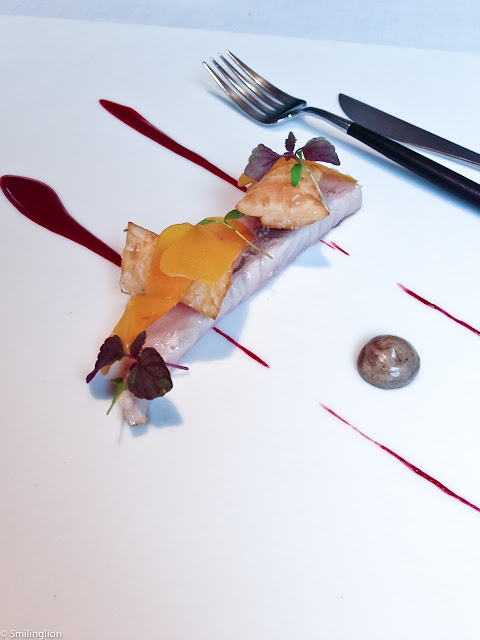 Pike with foie gras, truffles and fish roe: We didn't really catch what this dish was all about. There was a gooey beige paste over the fish (looked like melted cheese but tasted fishy) and there was a hint of foie gras on it, but overall it was quite delicious. The truffles were a nice touch to it. 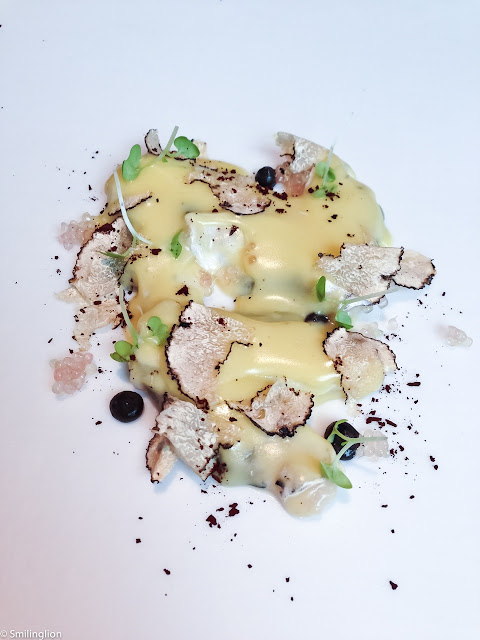 Cod and white boar: Fish and red meat rarely go well together on the same plate but this dish was surprisingly good. 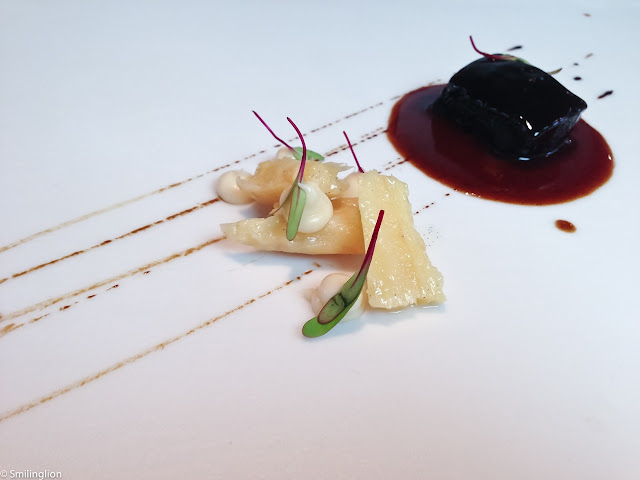 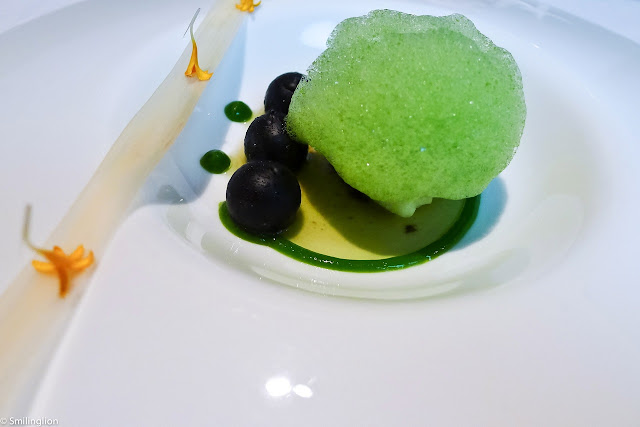 Wasabi, smoked green tea, chocolate and yuzu: The final dessert had three Japanese ingredients, which went well together with the milk chocolate wedges. It was a fitting end to a very good meal. 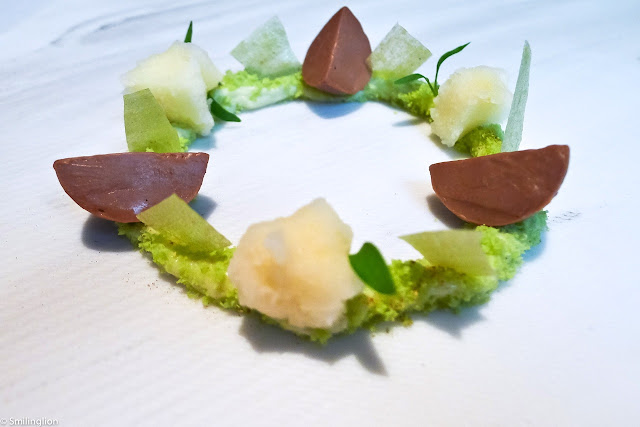 Final Thoughts: Judging by the difficulty in getting a seating here and the majority of local Spanish clientele (at least during the lunch when we were there), it seems like the Madrilenas have taken to fusion food with strong Asian influences. It was slightly bizarre for us to go to a two Michelin star restaurant in a Madrid suburb and have dishes which reminded us of home, but it was an excellently executed and thoroughly enjoyable meal. Chef David Munoz and his team managed to maintain a consistency of quality throughout our meal and successfully delivered a fusion of Western cooking techniques with Asian ingredients which was both entertaining and delicious.
Posted by Smiling Lion