Update: Can Fabes announced its closure in August 2013, due to the worsening economic situation and their inability to stay afloat.

In 2011, with the arrival of the 'Celebrity Restaurants' in Singapore in conjunction with the opening of the mega casino complexes, we were first introduced to Spanish haute cuisine by Santi Santamaria with his eponymous restaurant in Marina Bay Sands. Santi Santamaria was one of the top chefs in Spain and was considered a godfather of fine cuisine in his homeland. His flagship restaurant, Can Fabes in Sant Celoni just outside Barcelona, was one of the temples of fine dining and his other restaurants, notably, Sant Celoni (of the same name as the town where Can Fabes is located) were also very highly acclaimed.

We ended up visiting Santi Singapore a few times (see earlier reviews: Santi 1 and Santi 2) and it was at that time, the best restaurant in Singapore in our view. Sadly, Santi Santamaria passed away in Singapore on the day of the grand opening of the restaurant and a year later, the Santi Singapore closed its doors. This was seen as a huge loss to the dining scene in Singapore (though this coincided with the sudden boom of Spanish eating establishments in Singapore in 2012 with several new Spanish restaurants and tapas bars opening up). So therefore when we planned our trip to Spain this time round, Can Fabes was high up in our list of restaurants to visit. 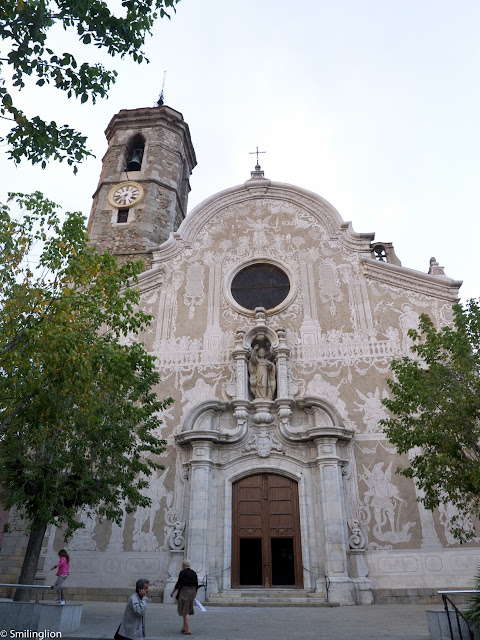 Can Fabes was the first Catalan restaurant to receive three Michelin stars and held it since 1994 till recently when it lost one star (quite likely because of Chef Santamaria's passing). It is located in a small town just a half hour's drive from Barcelona, and is in a house which apparently has been with the Santamaria family for two centuries. The town itself is tiny and aside from a church in its middle,  we didn't find anything else interesting to see. The premises also has luxurious accommodation (it is the smallest Relais & Chateaux in the world with only a handful of rooms), at which we stayed for 2 nights during our tour of the region outside Barcelona (which included day trips to Girona, Llanca and Sant Pol de Mar). The room we had was lovely. 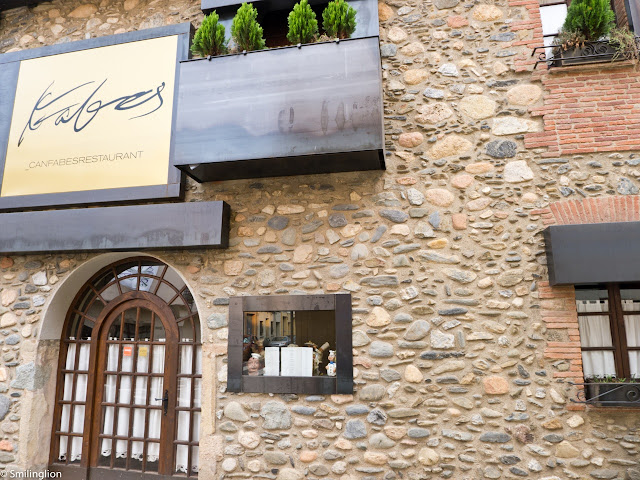 After being extended several times over the years, the house now has many 'wings' and spaces which have been designed differently from each other. The original dining room, which features stone walls and rough cut wood furniture, was where we were seated for our dinner, though we had our breakfasts in the other rooms which have modern and avantgarde designs. For the food selection, we were offered a grand tasting menu and a separate a la carte menu. We had intended to go for a la carte, since we had just finished a very big meal at Miramar for lunch, however, the a la carte menu was essentially a 'tribute to Santi' menu and contained only the dishes for which Chef Santi was famous. With the taking over of the kitchen by highly acclaimed Xavier Pellicer (most recently of ABAC fame, who is also previously worked at Can Fabes), we were keen to try the food of Chef Xavier and so for that reason had to take the grand tasting menu instead. 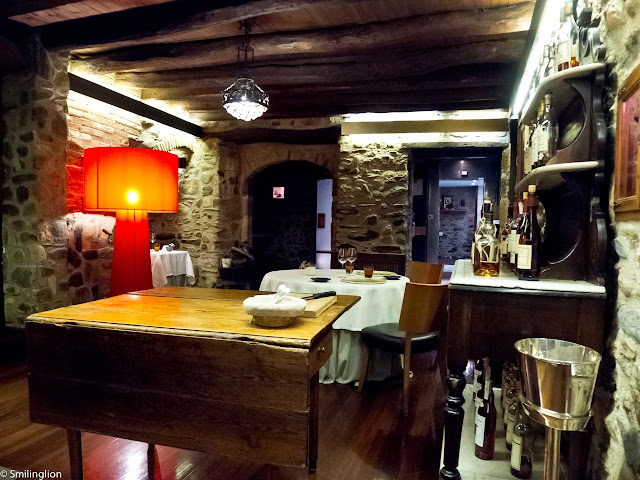 Radish, smoked butter homemade: This was a raw radish coated with butter. It was crunchy but we didn't particularly like it. 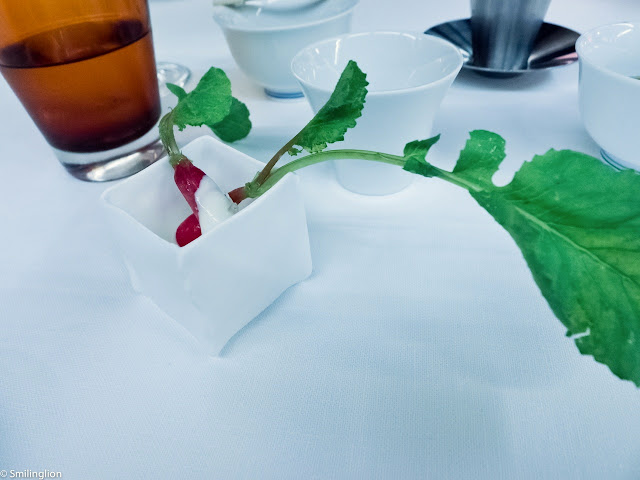 Peach marshmallow: It was slightly mushy and didn't have much taste. 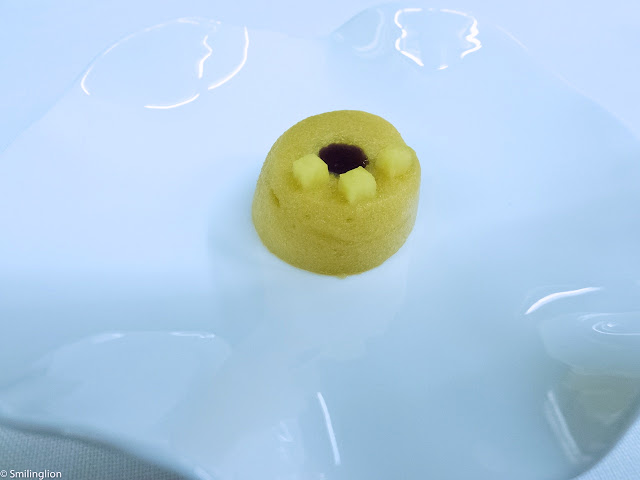 Mussel: This was very good. The mussel was filled with egg roe and sprinkled with specs of wasabi. 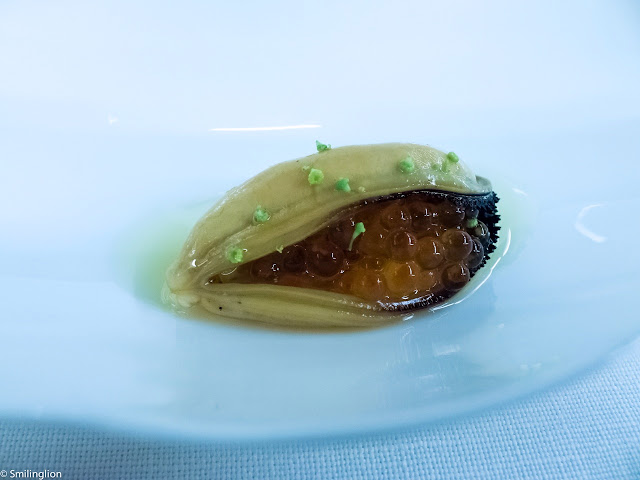 Mackerel fish with vermouth sauce: This was like a Japanese saba (but was very tender). The vermouth sauce was a nice touch. We enjoyed this dish. 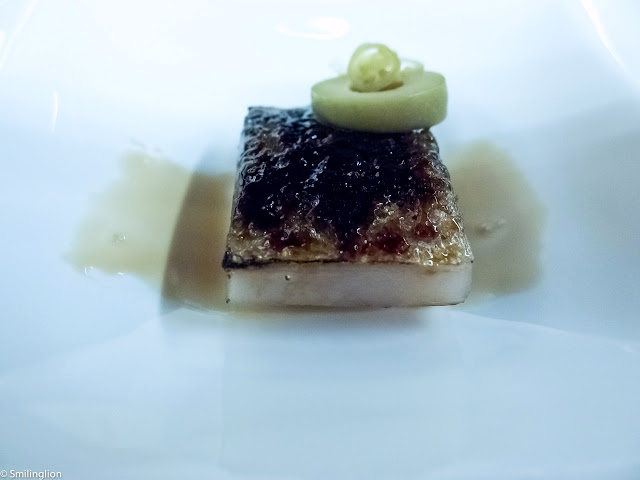 Tomato, yuzu: Another raw vegetable dish which was unremarkable. The yuzu foam added nothing to the raw tomatoes (which were very sweet and juicy). 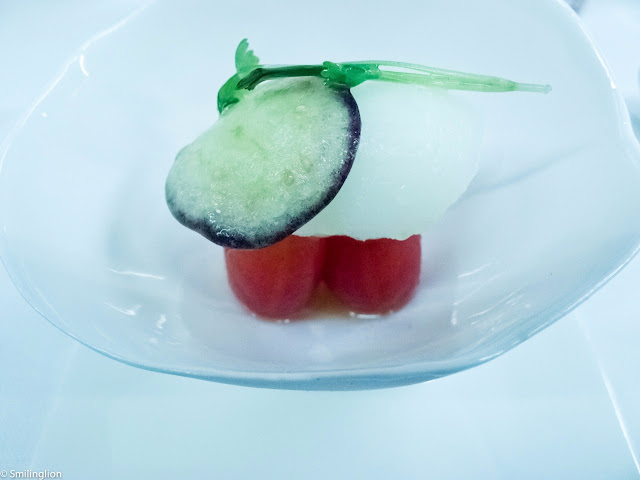 Potato omelette, caviar: This was quite good. It reminded us of the fried eggs and patata bravas we loved at the tapas bars. 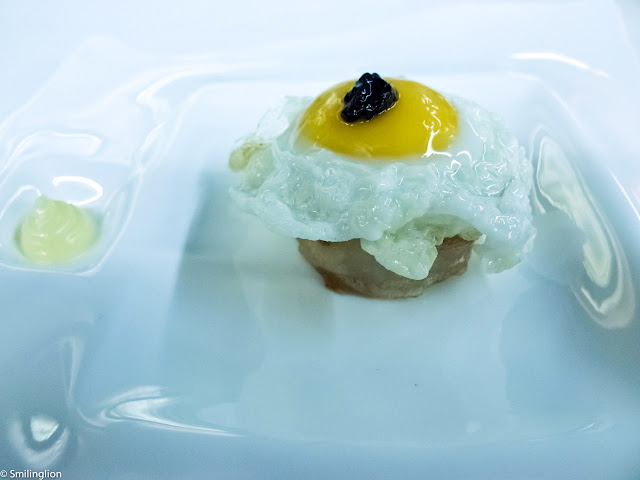 Vegetarian pizza: Pizza without the bread (i.e. a slice of raw tomato, some chunks of mozzarella and some rocket leaves). Clever but in actual fact very plain. 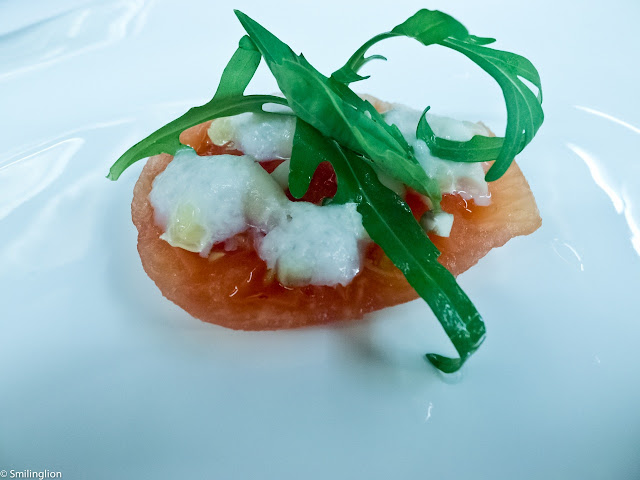 Corn cream, foie: This was quite good, though the sweetness of the corn quite overpowered the taste of the foie gras. 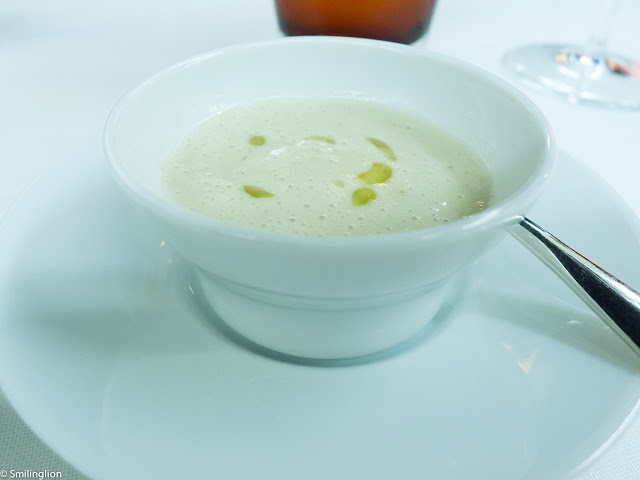 Santi's signature shrimp ravioli: The kitchen was very kind to serve us off the menu a small complimentary portion of one of the restaurant's signature dishes (found in the a la carte menu). This was a ravioli but with the shrimp sliced into a thin sheet and used to wrap the ingredients as a pasta replacement. It was very good. 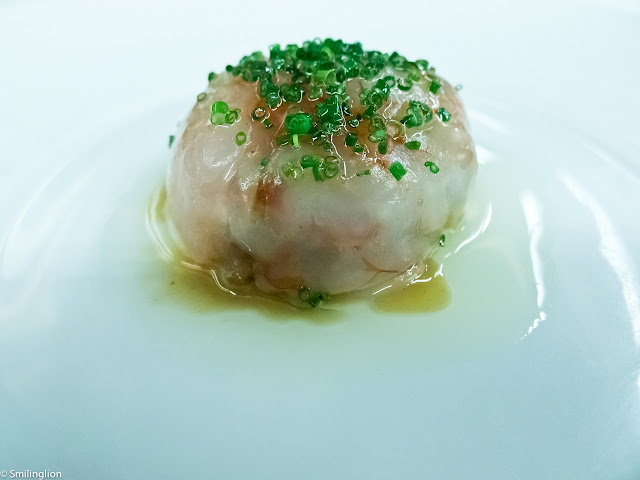 Squid from Blanes market, figs and salad: We loved the grilled squid. The sweet figs went well as the squid's accompaniment. 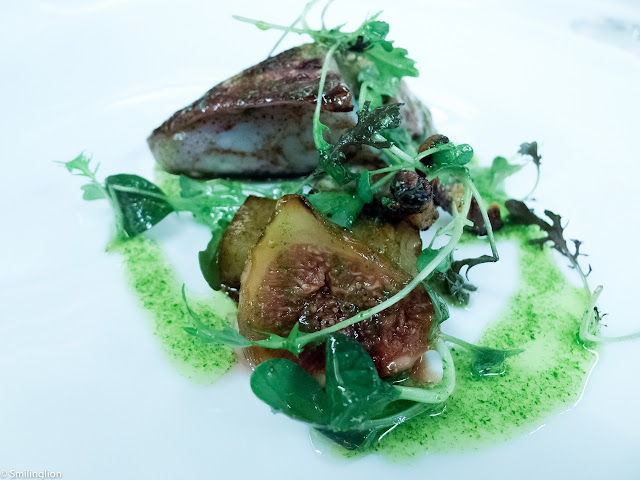 Sea anemones, in gratin: This was an unusual dish. The sea anemone was crispy on the outside but mushy inside (somewhat like the texture of sea urchin, but without the flavours). Other than the fact that anything deep fried is generally nice to eat, this was otherwise unremarkable. 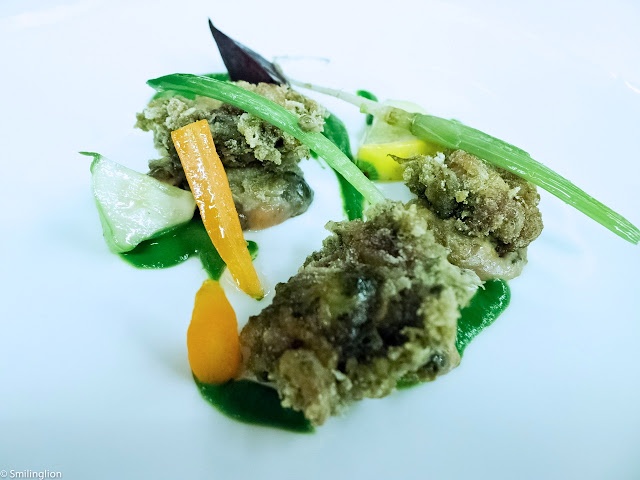 Sea cucumber, "ilaminera" green beans, garlic zabaglione: The sea cucumber here was very chewy (it was very hard to cut with the fish knife we were given) and devoid of taste. We were very disappointed by this. 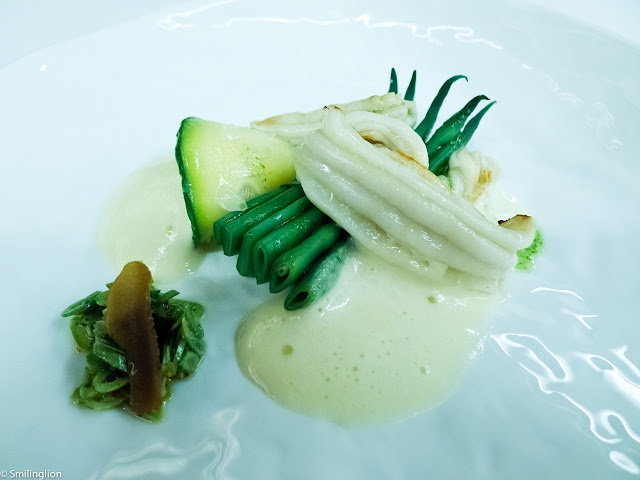 Razor clams, comb and sweetbread: This was not bad, the sweetbread and sauce saved the otherwise chewy and tasteless razor clams. 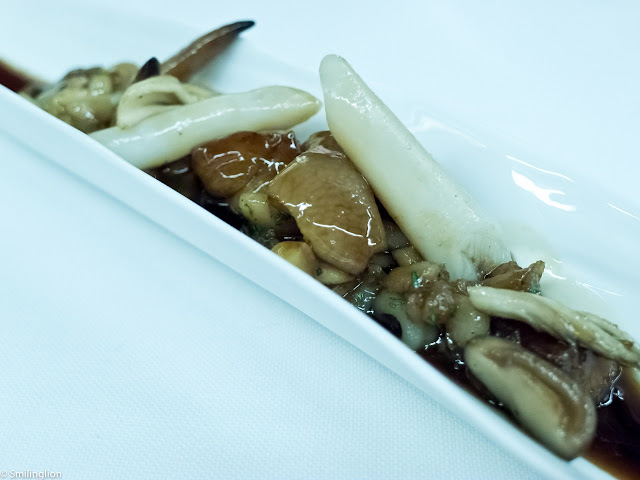 Crustaceans suquet: We did not understand this dish. It was one plate, with so many ingredients which did not really complement each other, and all soaked in a consommé which only served to make the other things on the plate (i.e. the fish, prawns and the thin crisps) soggy. 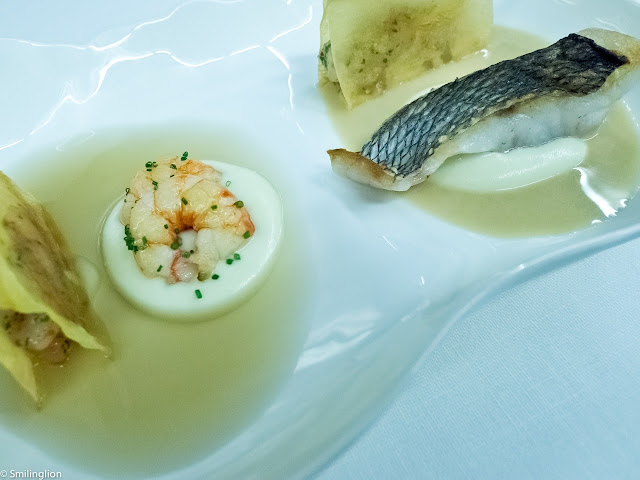 Goatling, preserved and laquered: The final meat dish was the baby goat which was delicious, although it came with a separate glass of goat's milk which tasted odd and totally unnecessary. 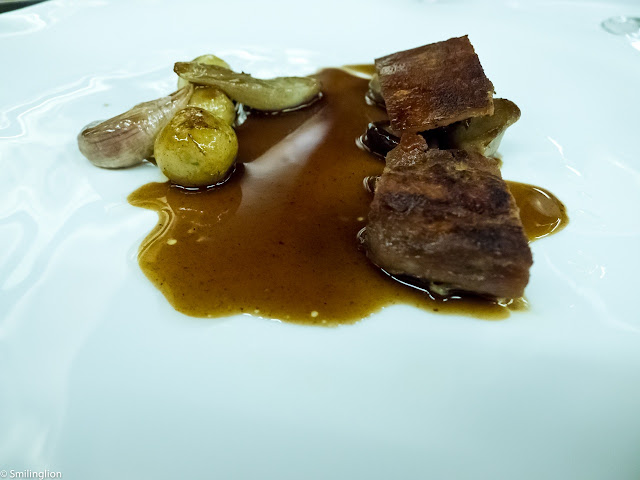 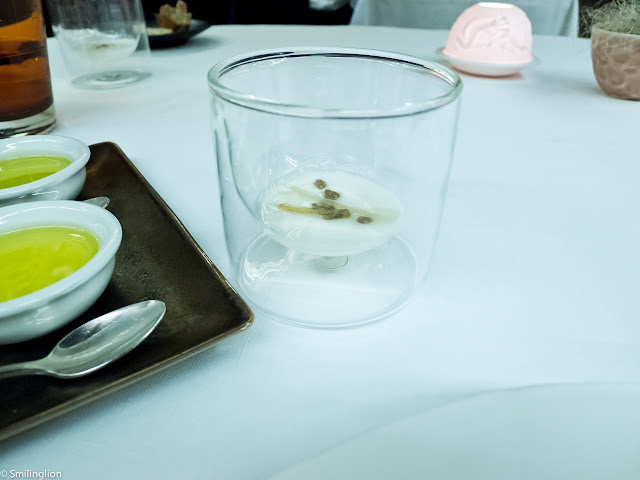 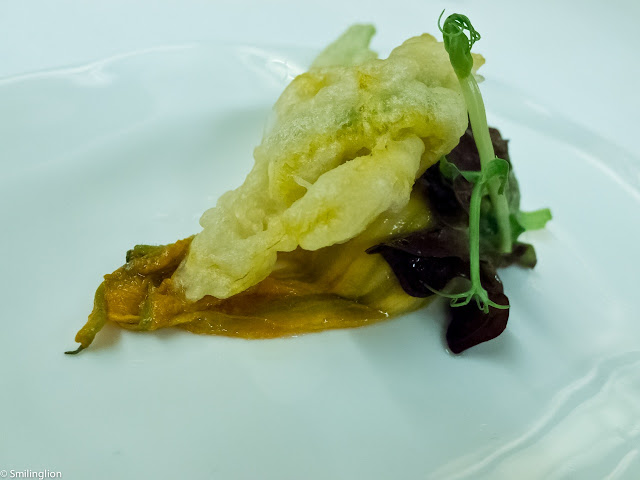 Apple and thyme: The apple sorbet on a carbonated thyme soda was interesting and refreshing. 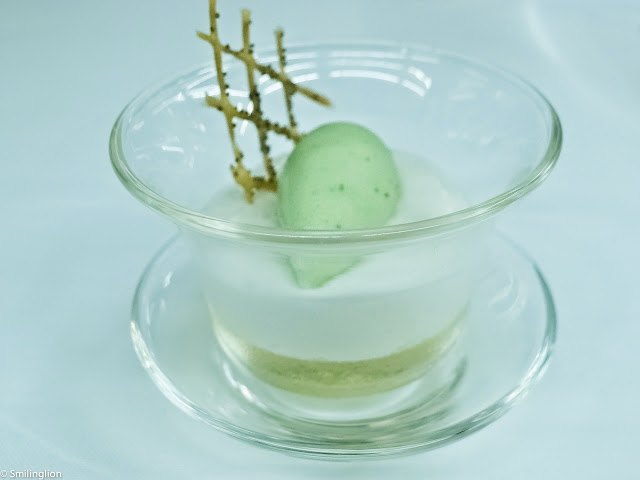 Musical symphony: We thought that the dessert was merely ok, though we couldn't comprehend why it was named as such. 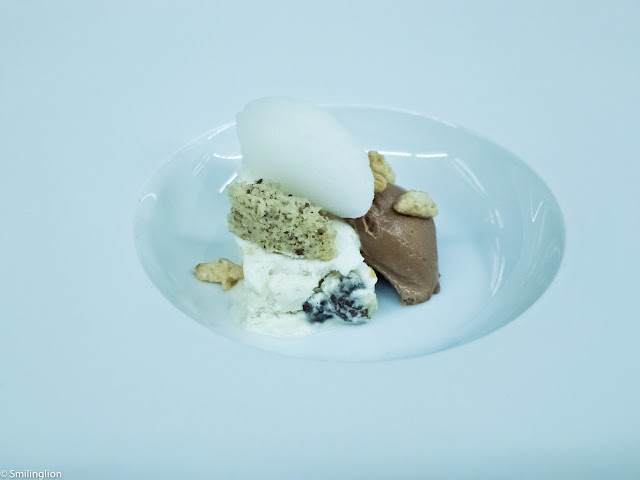 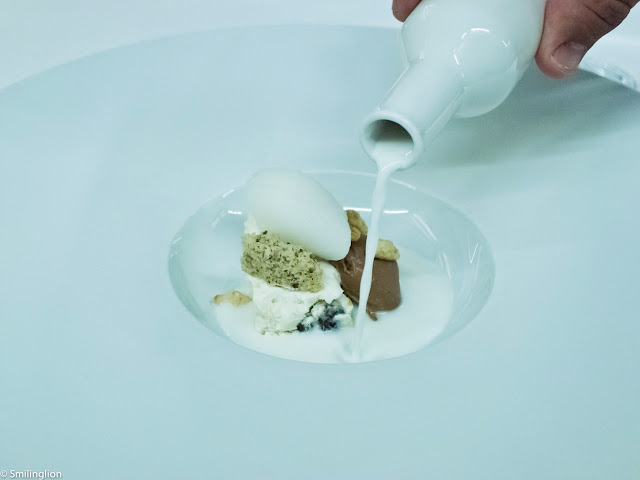 This being our second grand tasting menu of the day, we were not able to touch even one of the mignardises. 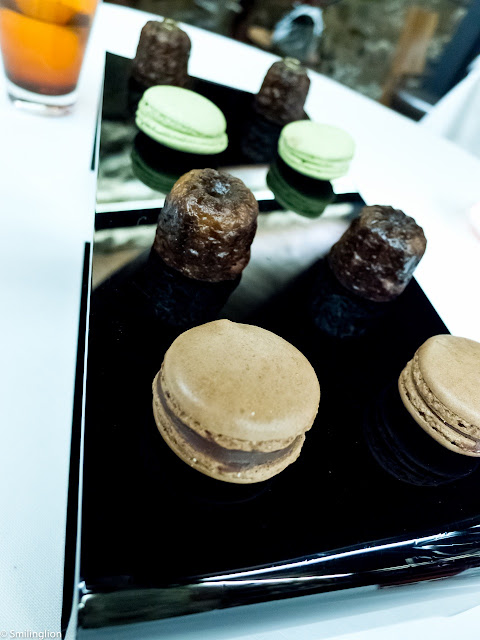 Final Thoughts: With this meal, we finally understood the recent (less than flattering) reviews on this restaurant and also probably why it lost its third Michelin star. Despite this being the flagship restaurant of the Santamaria restaurant empire, we remembered enjoying our meals at Santi Singapore more. Service was attentive but quite morose and the food was good but not good enough for a restaurant of this standing. We thought that with the losing of one star, they would go all out to try to regain it but instead it felt like they were still paralyzed by Chef Santi's passing. It didn't help that at every corner of the building there was a memento of Chef Santi, whether a picture, a book, a drawing or a kitchen implement, which made Can Fabes feel more like a Santi Santamaria museum than a fine dining restaurant. Despite the return of Chef Xavier Pellicer to shore things up, the restaurant still felt like it was getting over the recent death of Chef Santi. In fairness, Chef Xavier probably needs more time to impose his own personality and style on Can Fabes, but it's telling that we felt that our meal at ABAC (which Chef Xavier left to take over Can Fabes) two days before was much better than our meal here.
Posted by Smiling Lion