ABAC is a newly-minted 2 Michelin star modern Spanish restaurant located on the fringes of the centre of Barcelona. It is a restaurant of some repute, having previously held 2 stars which it then lost when its previous chef, Xavier Pellicer, left. But the emergence of Jordi Cruz, its new chef, has led to its re-establishment as a tour de force in the Barcelona dining scene and it regained its second star this year. Although the restaurant is housed in a boutique luxury hotel of the same name, we couldn't find the driveway to the hotel and instead, enclosed in a private estate, its entrance was a nondescript (except only where the name of the restaurant/hotel was printed in large letters) locked wooden gate along the main Plaça Kennedy roundabout, and we had to ring the buzzer to be let in. 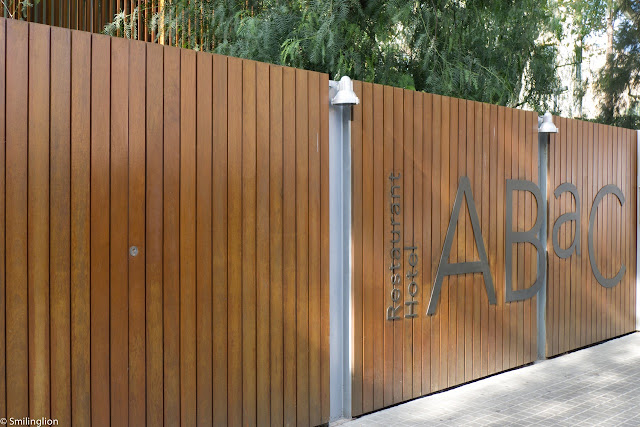 ABAC sits on well-manicured grounds with a very zen feel. The restaurant is on the ground floor and overlooks the garden. Despite the hustle and bustle of the main street outside, it manages to retain an air of tranquility and cool about it. We were there for Tuesday lunch and it was relatively quiet, with only 3 other tables occupied. 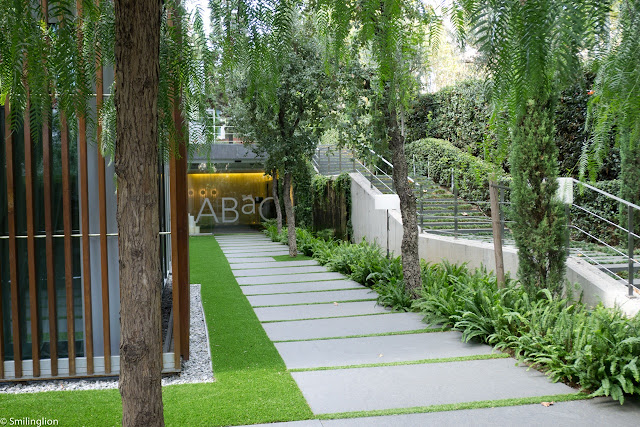 We were warmly welcomed and excellently served throughout our meal. Because we had 2 breakfasts that morning (at Pinotxo and El Quim), we opted for the smaller of the 2 tasting menus, with a wine pairing as suggested by the sommelier. 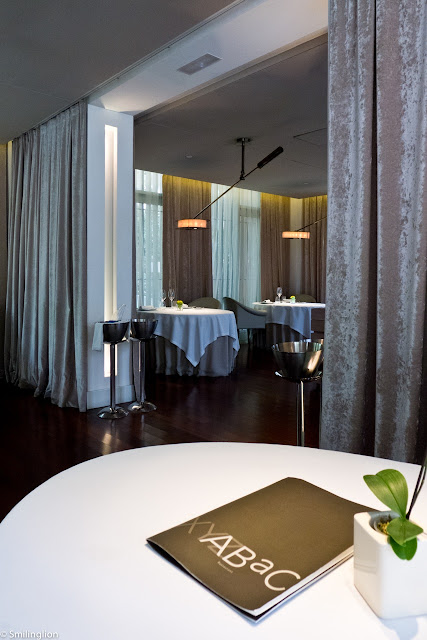 Melon Mojito: A refreshing cocktail glass of mint sorbet, a slice of syrup-soaked melon, rum jelly and a stick of sugarcane (which we had to chew to release the sugar flavour). 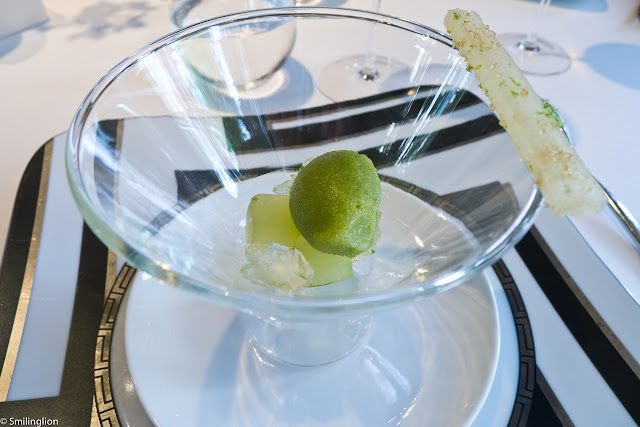 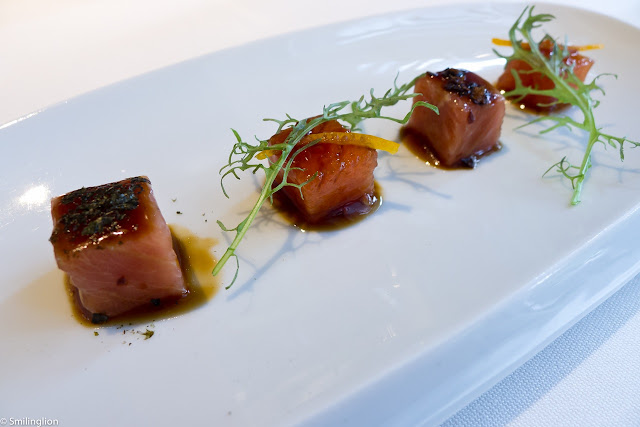 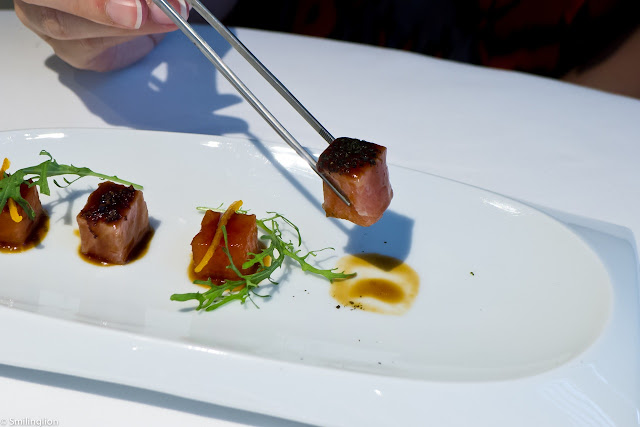 Liquid parmesan gnocchi in citric butter with nuts, lemongrass and truffle mushroom infusion: The gnocchi was a sphere of liquid cheese which burst with flavour when put into the mouth. This was very good. 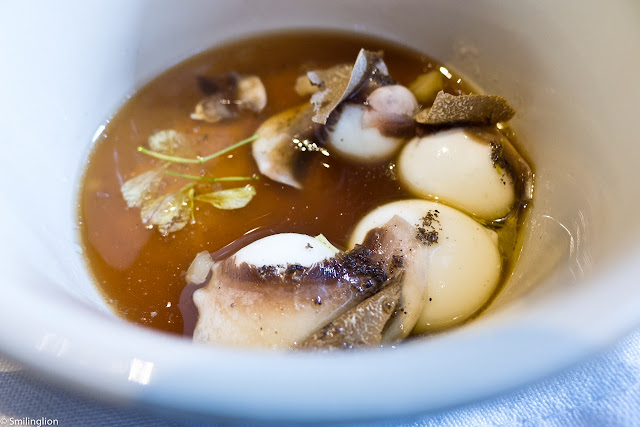 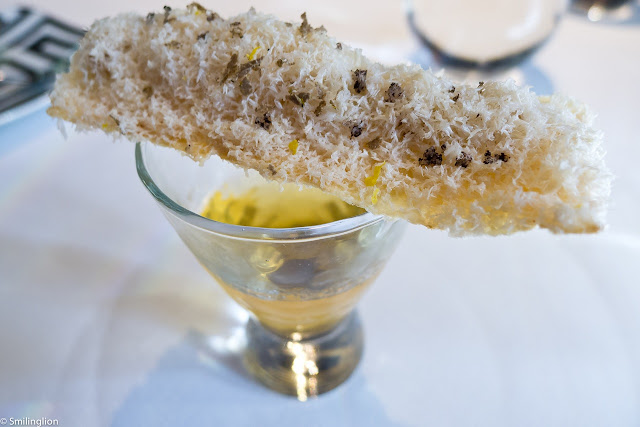 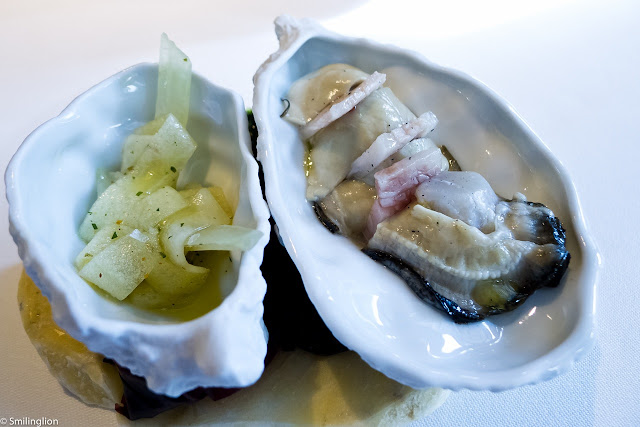 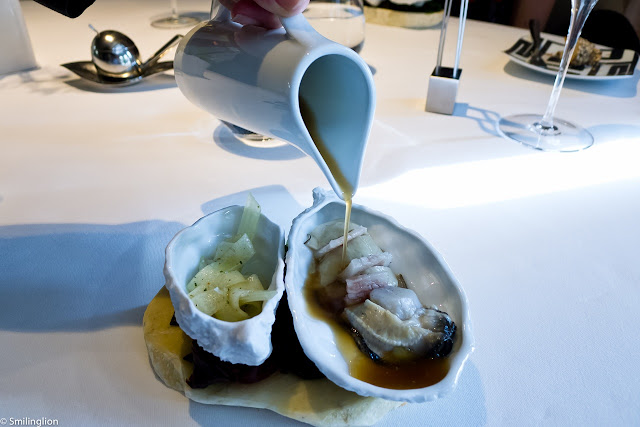 Smoked steak tartar, seasoned snow-like beef, cooked egg yolk, veil of mustard and pepper bread brittle: This was a more refined version of the usual steak tartar as the beef was chopped more finely than usual, and had the customary ingredients of egg and mustard. The crunchy zucchini flower was a nice touch. 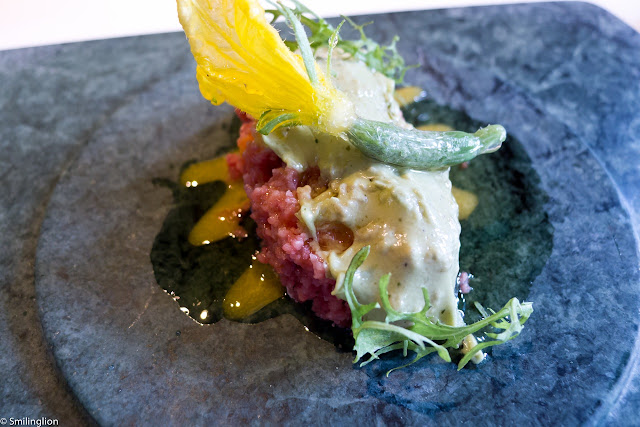 Prawn with hazelnuts looking like chickpeas, Fideua juice, Iberian tears and citronella's aioli: The prawn was served on a hot stone with a flame flickering over a bed of salt below. The hazelnuts were soft and tender and had the texture of chickpeas. This course tasted good and was very clever. 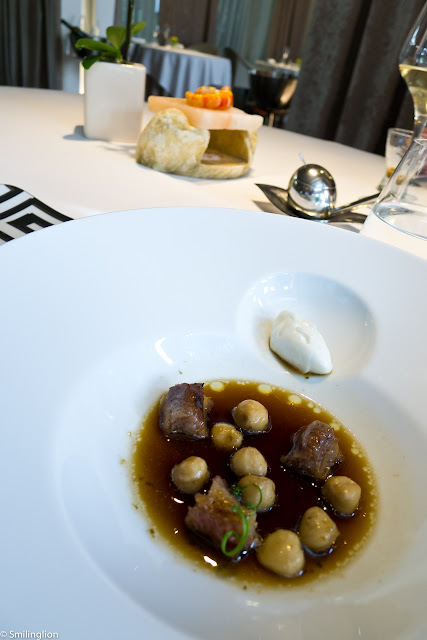 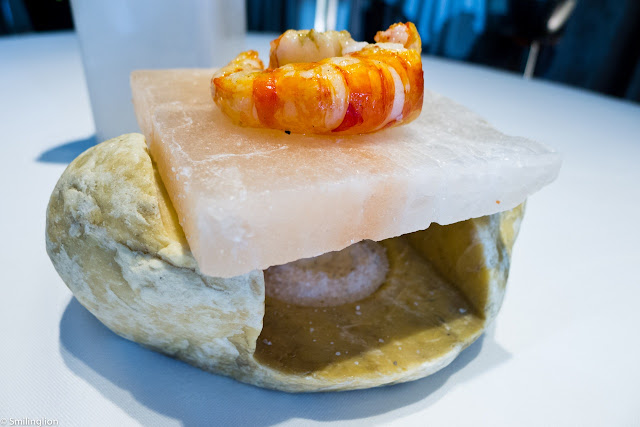 Rice of velvet and edible crabs with ponzu macaroni: This was also brilliant; the crabmeat rice with some tanginess brought about by the ponzu macaroni. 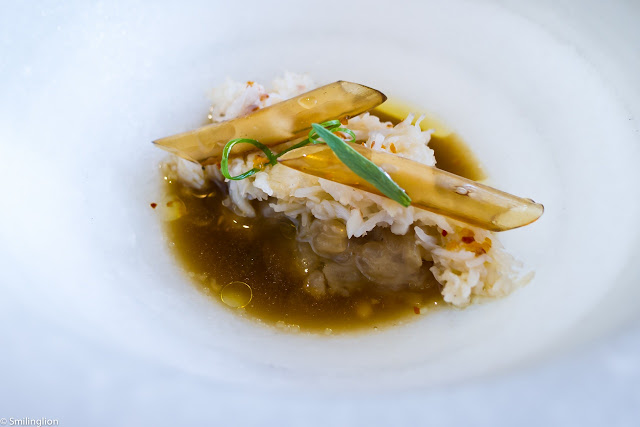 Fried Mediterranean "Lorito" fish, served with onions, garlic toast, tomatoes and lemon basil: The fish course was very light. The fish had its skin perfectly crisp and the meat sweet and tender, and the sauce and accompanying ingredients complemented the fish well. 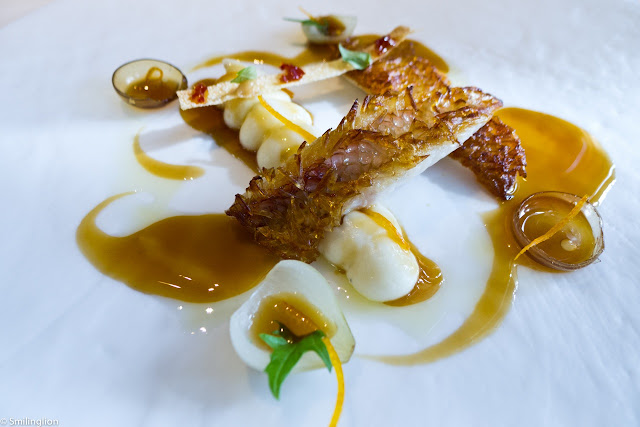 Pigeon a la Royale, stewed stuffing, roasted meats, foie-gras with livers, pineapple juice, blueberries and pine nuts: This was the chef's take of a stuffed pigeon but in this case, with the stuffing on its own. It was a very good dish. 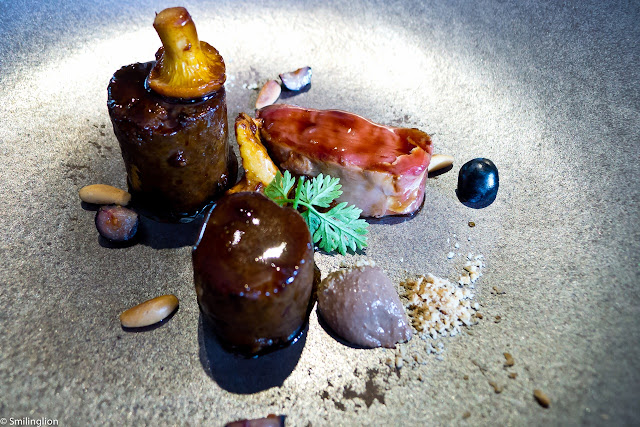 Wild strawberries with coconut, lime, yoghurt and roses: Our favourite course was this strange looking pre-dessert. It looked like the strawberries were covered with cream or some glaze but in fact the white covering was a large thin slice of fresh coconut. It was fantastic. 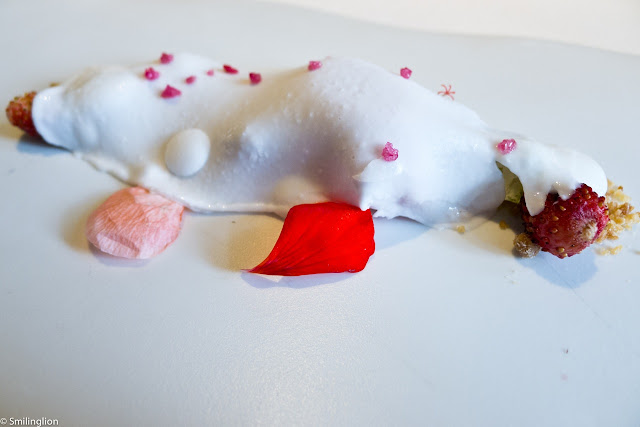 On a bed of smoked bread brittle, roast biscuit, banana, coffee, vanilla and bourbon: This was caramalised bread presented in a mist of bourbon, and the other plate of roast biscuit crumbs, banana, vanilla cream and coffee cookie was spritzed with some bourbon as well. A very good dessert. 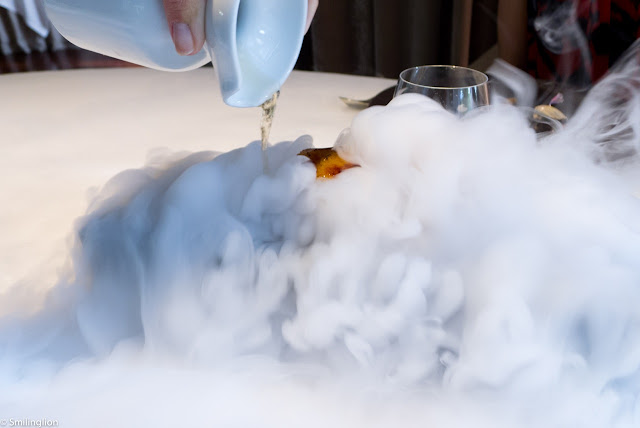 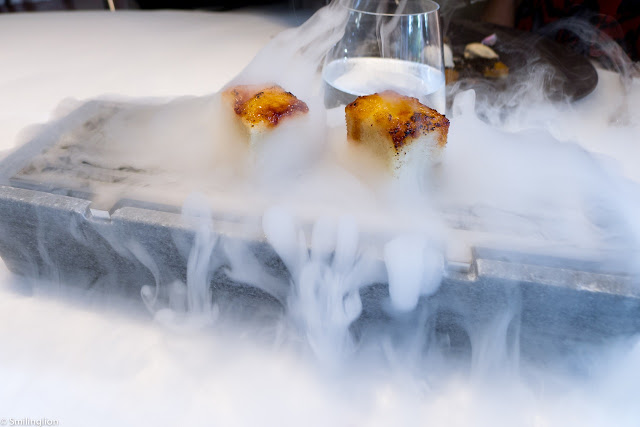 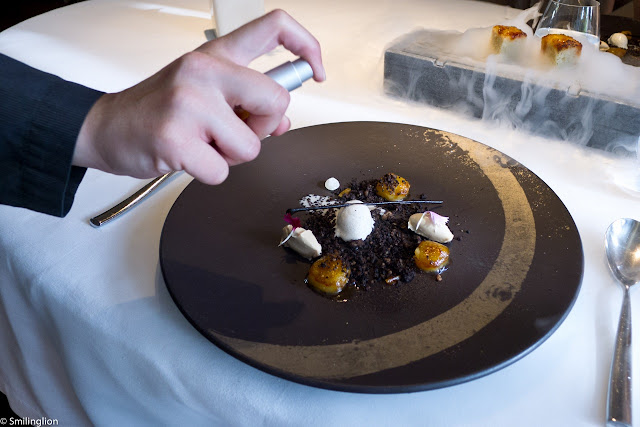 Post dessert mignardises were rather unconventional. Aside from the usual tray of chocolates, jellies and sweets (no pictures unfortunately), we were also served a refreshing yoghurt granita in a glass jar (reminded us of something similar at Andre). 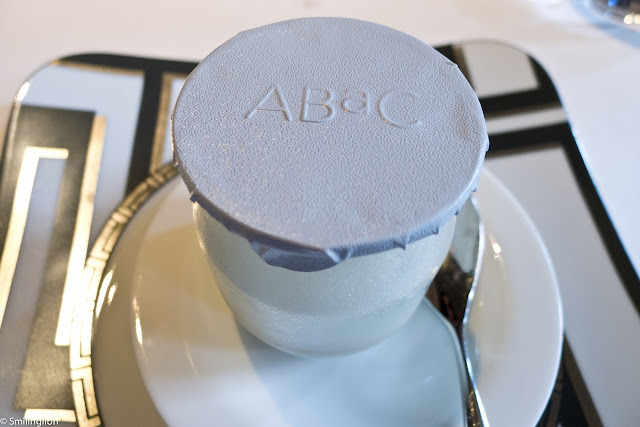 More interesting was the lipstick of raspberry popsicle which was a quite delightful to a truly memorable meal. 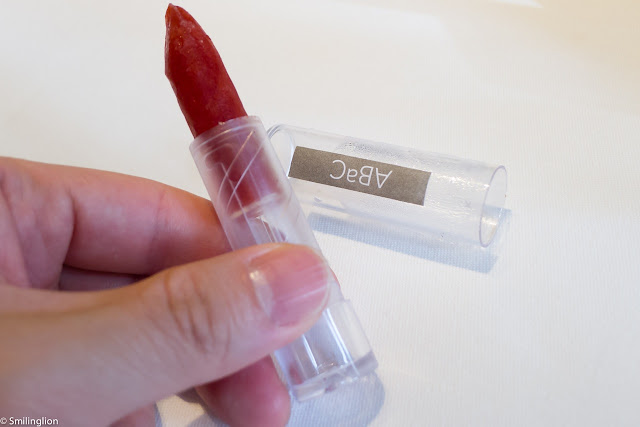 Final Thoughts: We enjoyed every dish served at this restaurant, and coupled with the beautiful dining room and surroundings, the good wine pairing put together by the friendly sommelier and the excellent service, it was one of our favourite meals in recent times.
Posted by Smiling Lion