What a treat! Two meals at Jason Atherton restaurants in a space of a week! After our enjoyable lunch at Pollen a few days ago, we decided to try to get a table for lunch at Esquina. This restaurant is probably the first of the recent wave of modern tapas bars sprouting up all over Singapore. One could credit Esquina for starting the trend of Spanish cuisine in the past year, except that in our view, for Esquina, 'tapas bar' is probably more a description of its concept rather than its food, as the fare they serve may be more accurately termed as high-end gastro-pub food mixed with some familiar Spanish favourites. 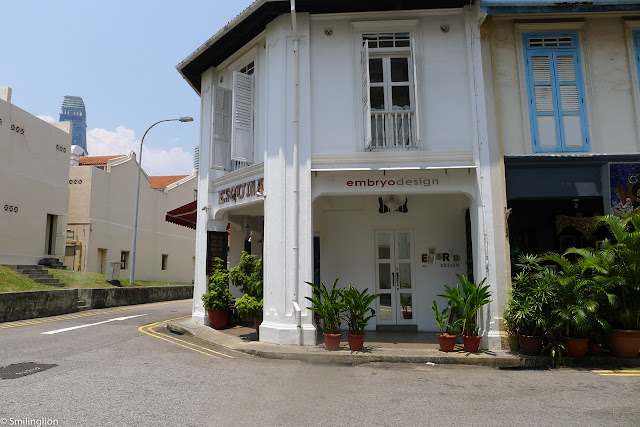 Esquina is located at the corner of a quiet side-alley off the bustling Keong Siak Road, a former red-light district in Chinatown now rehabilitated into a hodge podge of dining and drinking establishments. It doesn't take reservations, which is a standout trait for a popular upmarket eatery in Singapore (and not necessary one which is positively viewed by the dining public). The few times we tried to go there for dinner, by 6pm there was already a crowd waiting, and any later and we would have had to stand outside to wait 2 hours while the diners in the restaurant finished their meal and the tables could be turned over. The high tables outside were more easy to secure, but the action was always inside and on a warm night it wasn't the most pleasant experience to be outdoors. 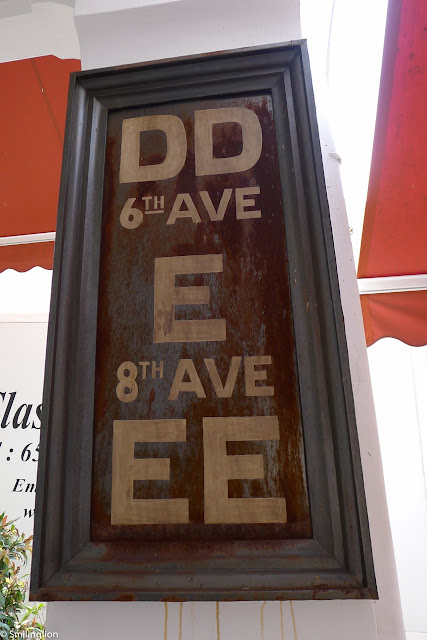 It was with this in mind that we decided to try for lunch instead. This time we were there by 11.30am (even though the restaurant opened at noon), and managed to secure a seat at the bar counter when they opened their doors. They had quite an extensive menu of food from which we tried to pick out as much as possible. 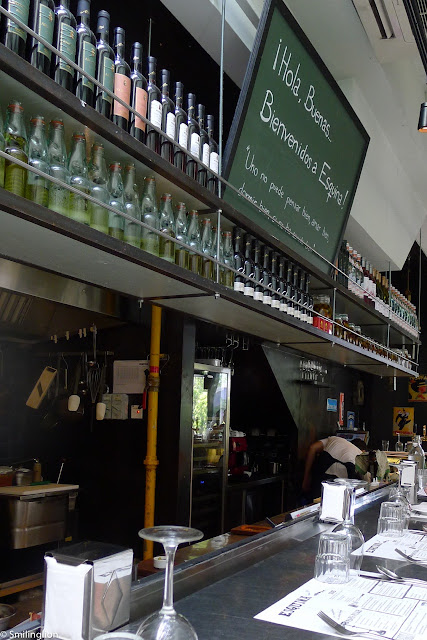 Barbecue roasted corn: The ultimate bar snack, the roasted corn looked like and had the crunchiness of a peanut. A healthier alternative to nuts? 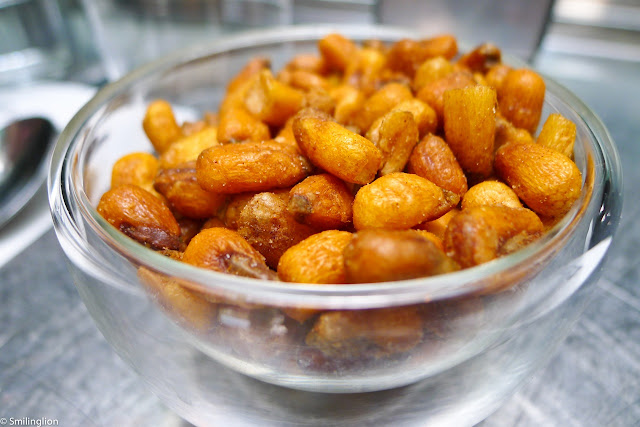 Potato fries with rosemary garlic, salt and chorizo ketchup: The fries were quite good but in hindsight, with such other good food to be had here, it seemed a waste of our stomach space to have fries here. 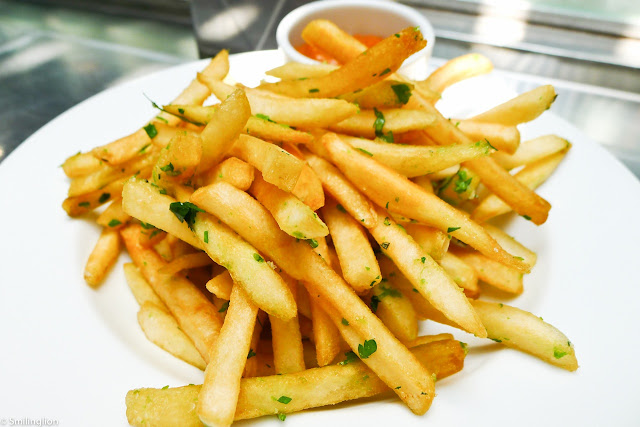 Spanish breakfast - slow-cooked egg, bravas sauce, potato and crispy iberico: Excellent dish, but very similar to what we had at Pollen a week ago. 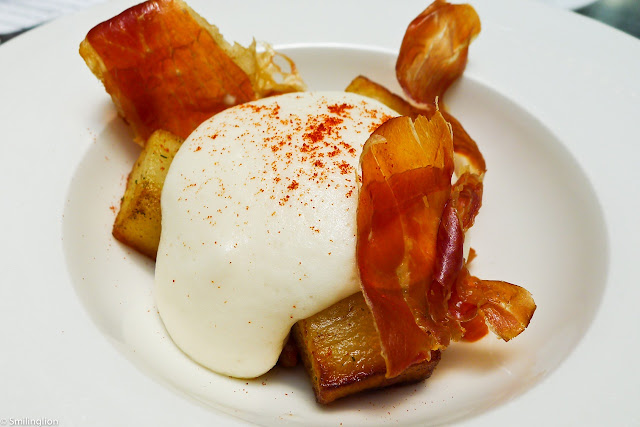 Smoked haddock, spring onion and manchego omelette: One of our favourites that day, this was a creamy baked fish and egg omelette which was silky smooth and delicious. 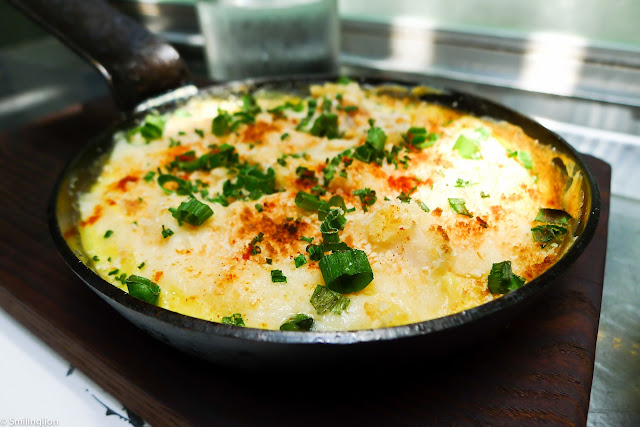 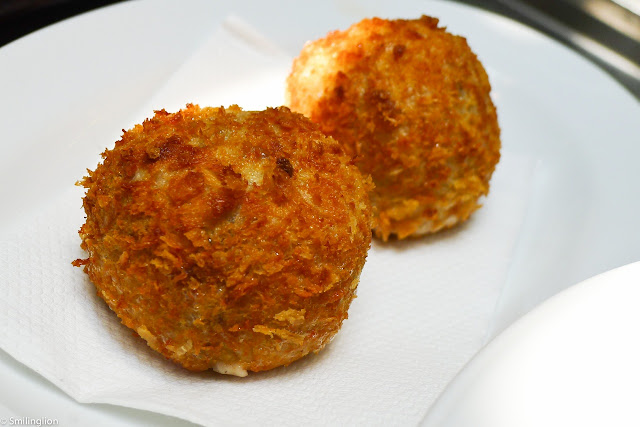 Roast pork belly, crispy skin, chorizo octopus bolognaise: Another dish which quite resembled the main course we had at Pollen. The pork belly was equally good and the crispy skin equally superfluous. 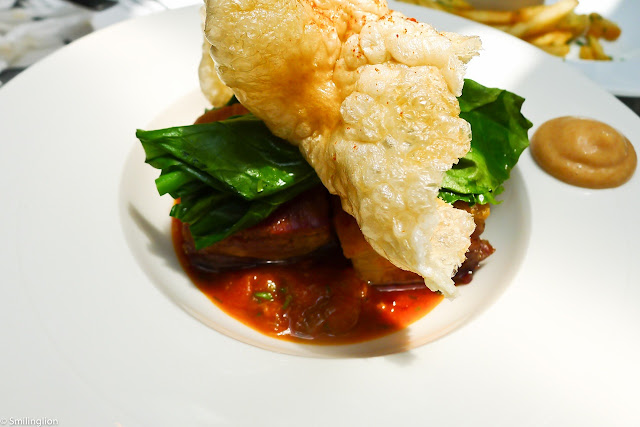 Salt and pepper squid, black ink aioli: This was supposed to be a signature dish here, but although quite tasty, this wasn't as special as we had expected it to be. After all, it was just deep fried squid with salt and pepper. 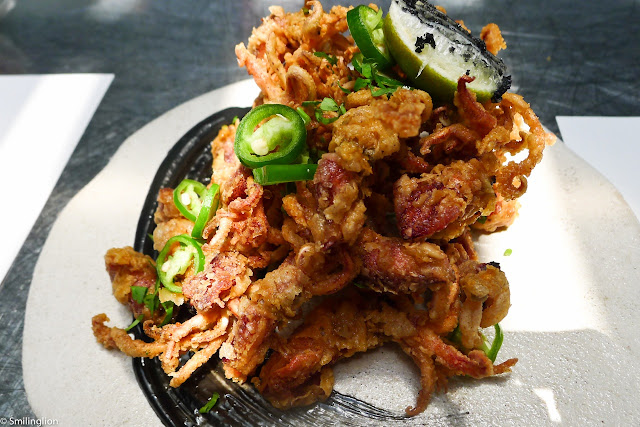 Gambas with chili garlic and potato dumpling: This was a good dish, and in particular, the gnocchi was a nice touch. The sauce was seafood-based yet had an Asian tanginess to it. 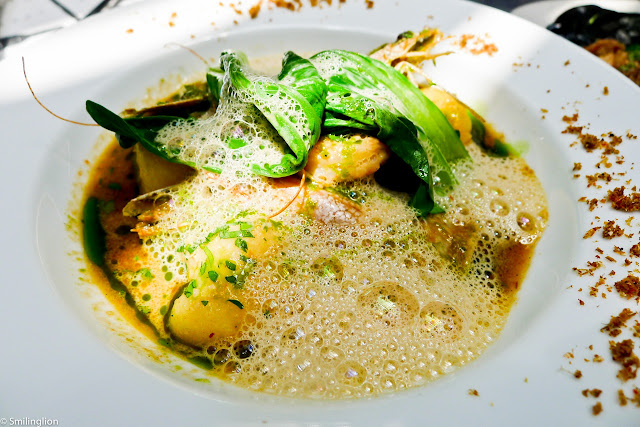 Marinated beetroot salad, honeycomb burrata, pinenut crumble: It was apt that this 'salad' dish came at the end, just before dessert. It was also one of our favourites of the meal. The cheese was so creamy and the beetroot so sweet that it tasted more like an exquisite dessert than a salad to be had at the beginning of the meal. 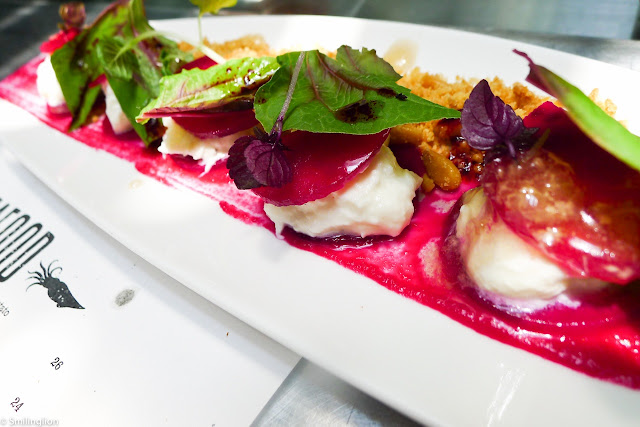 Seville orange and rosemary ice cream, burnt meringue, citrus curd, marmalade toast: A tangy dessert which was a very good epilogue to a rather filling and very enjoyable lunch. The meringue mounds here reminded us of the dessert we had at Pollen, except that this one here was done right (baked fully so that it was crispy). 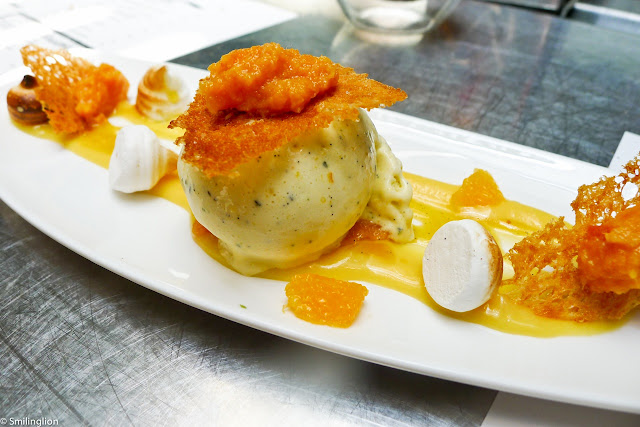 Final Thoughts: This tapas bar doesn't take reservations which continues to be highly annoying (when we came for dinner twice, each times we had to wait (standing outside) almost an hour and in both cases we settled for an outdoor table which wasn't half as enjoyable). However, it should not detract from the fact that the food was highly accomplished this time we were here (although when we first came here when it just opened, the food wasn't yet at this level). This time the service was prompt and the food came out in a timely fashion. We'd love to have a proper dinner here but are not prepared to take the risk of not being able to secure a seat for the evening (and don't fancy standing around for an hour waiting for one).
Posted by Smiling Lion