Update: Regrettably, Cepage has closed. Its lease ended in June 2013 and there are currently no known plans by the Les Amis group to re-open something similar in Hong Kong.

Another Hong Kong trip and another customary visit to one of our favourite restaurants there. For some reason we have grown to love this rather non-descript fine dining joint at the hip edge of Wan Chai. This time we were there early enough to have a drink at the roof top bar (the last time we were there it was during winter and the wind was too cold and strong). 'Roof top' as a description though factually correct was rather ironic given that we were on the fourth floor of a row of shophouses and surrounded by tall skyscrapers. That said, chilling out in the open concrete jungle with a flute of champagne was a uniquely Hong Kong experience. 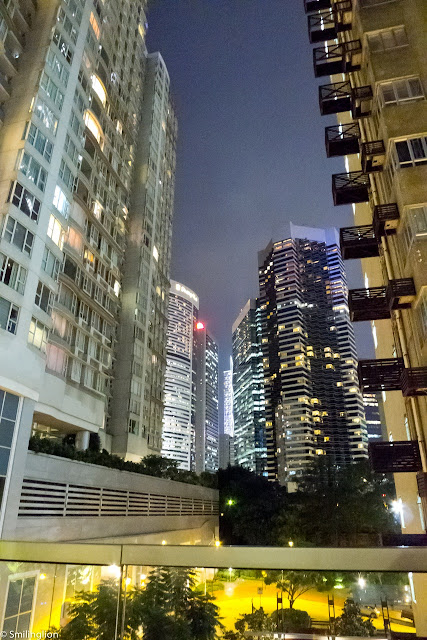 We have always felt comfortable at this one Michelin-starred restaurant (we joked that this is because Cepage is our favourite Singaporean restaurant in Hong Kong (in actual fact it is part of the Singaporean Les Amis Group)), and despite its formal setting, we have enjoyed its discreet yet warm service and ambience. So despite the fact that it cannot claim to have the best food in the city (and can be rather pricey), we have found ourselves coming here more often than any other restaurant in Hong Kong (see earlier reviews: Cepage 1, Cepage 2, Cepage 3). It certainly has one of the best wine lists here (mainly because the Les Amis Group is also a prominent wine retailer), boasting a wide selection of French wines in particular.

To accompany our dinner, we selected a Gevrey Chambertin (Vieilles Vignes, Bernard Dugat Py 1998) and a Chateauneuf-du-Pape (Les Quartz, Clos du Caillou 2003). The Burgundy was drinking beautifully but the Rhone was still quite young and tannic. 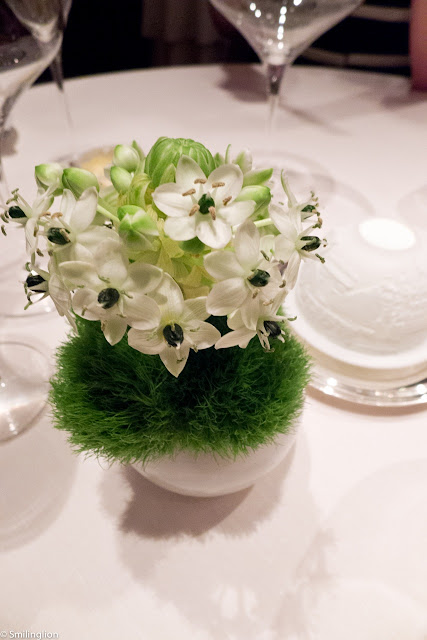 Simon Martin - "Guijuelo" Spanish Iberico ham: Cepage has never disappointed with its Spanish ham and it was no exception this time. 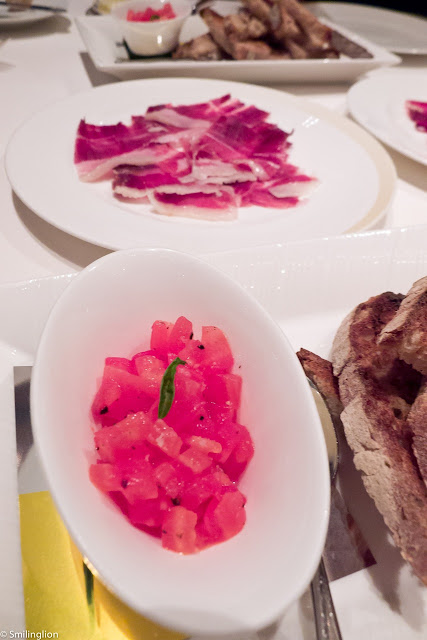 Amuse bouche - raw scallop wrapped with black truffles and black truffle consommé: The most memorable dish for this meal was surprisingly the amuse bouche, which was unusual in concept and presentation but utterly divine in taste. Black truffle can be quite tasteless at times (especially when compared with its more luxurious cousin, the white truffle), but this dish managed to bring out the essence of its flavour. 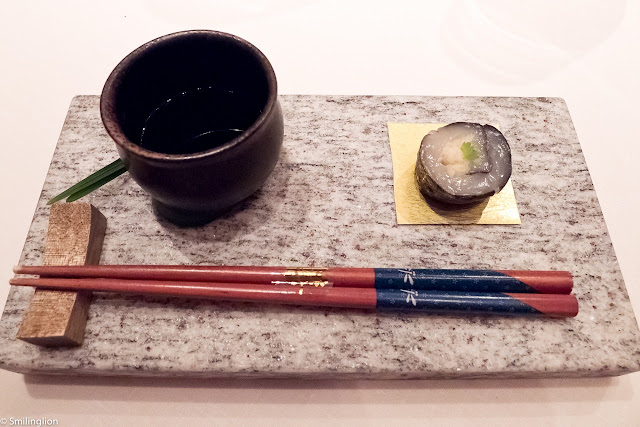 Le Homard - Lobster suspended in an oxtail and black truffle jelly, accented with the "Belle de Fontenay" cream: An interesting dish and one with many different contrasting yet complementary tastes. I enjoyed the first half of it but started to get bored of it thereafter. This would have been an excellent amuse bouche if served in a smaller portion. 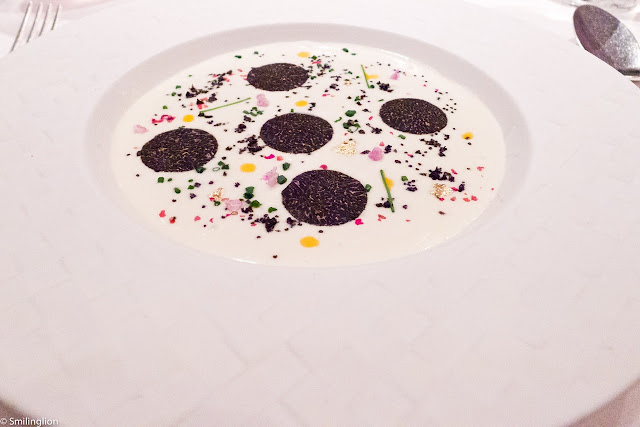 Le Foie Gras - Pan fried foie gras with pre-summer cherries: This was a classic dish done without fuss and was excellent. 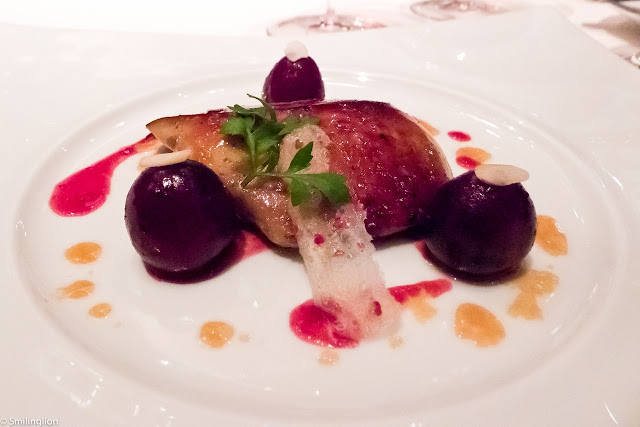 Le Veau - Veal chop from the region of Limousin, France, grilled over charcoal, served with Japanese white asparagus: We had looked forward to this for a while (having had this previously here) and we actually 'pre-booked' this days before we arrived (not that this was necessary, we just didn't want to be disappointed). The white asparagus and black truffles were a welcome addition to the dish, though we missed the pesto pasta which accompanied the veal the last time (and which was superb). 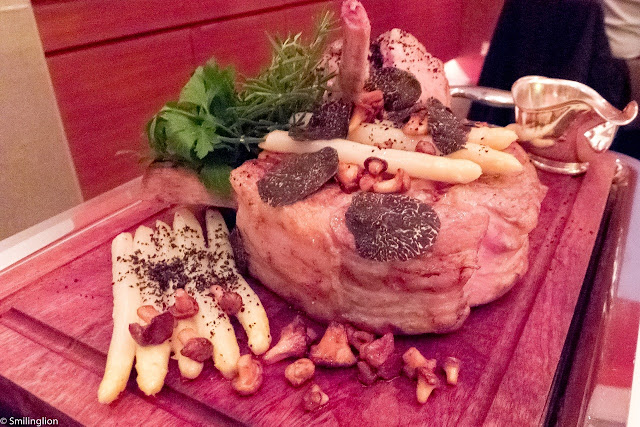 We ordered 2 portions, which was sufficient for the 4 of us. The meat was carved table-side. 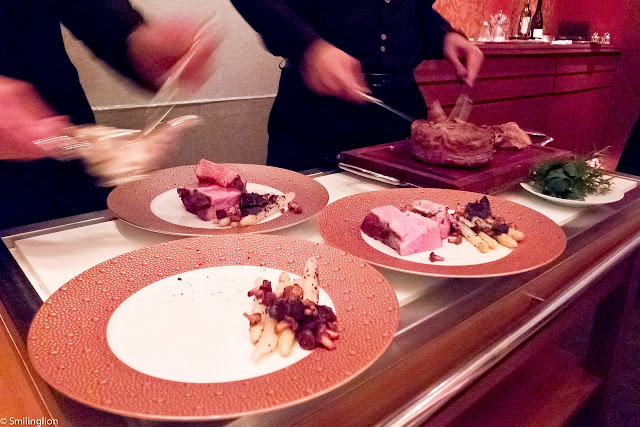 Admittedly the meat was better than it looks in the photo below. I was (unfortunately for me) given the fatty bits of the veal. My friends had the nicer looking cuts. 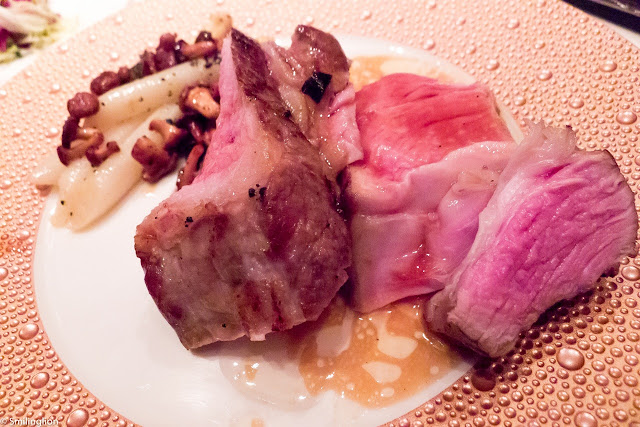 Selection of French cheeses - Selles-sur-cher, 24 month aged Comte, Epoisses and Roquefort: We picked a few of our favourite cheeses from a good selection, but made the amateurs' mistake of eating the Epoisses first (it was so tempting, being nicely put on a spoon) and hence overpowering the goat's and hard cheeses when we ate them subsequently. 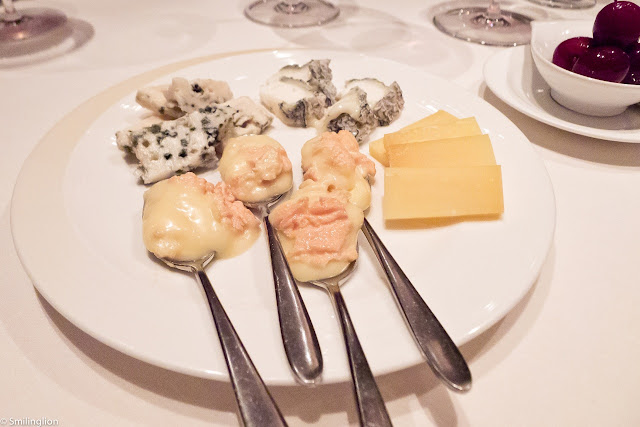 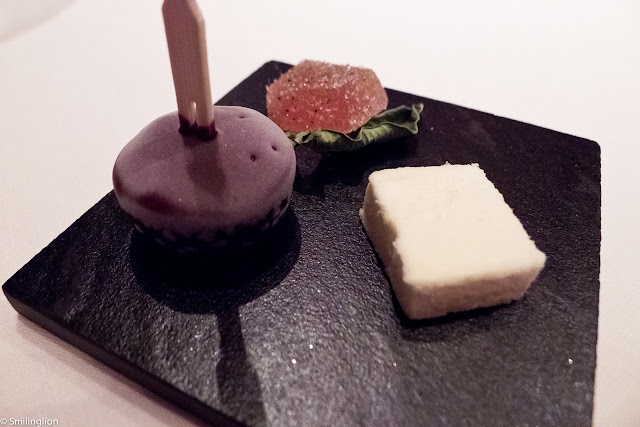 Le Mais - Trilogy of sweet corn symphony soufflé, ice cream, caramel popcorn and La Peche - White chocolate sauce and fresh Japanese mono: The peach was tangy and refreshing but otherwise unremarkable but the corn soufflé was unbelievable. It was served with an equally excellent corn ice cream and pop corn. This was a new flavour for us and we hadn't thought that corn would be such a great flavour for dessert. 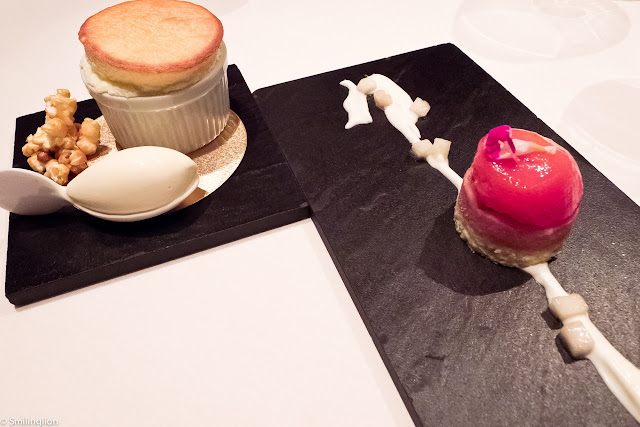 Petit Fours: For the earlier diners, they had the benefit of choosing from a large tray of eclairs, but we were amongst the last diners at the end of our meal, and the four eclairs we got were probably all they had left.  Despite how full we felt at that time, these were good enough for us to further burden our stomachs. 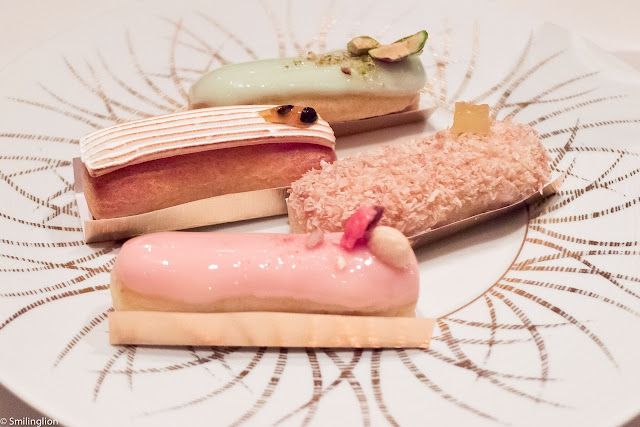 Final Thoughts: Classical french fine dining without the stuffiness and in a relaxed yet elegant dining environment. This remains one of our go-to places in Hong Kong if we don't want to think too hard about where to eat or fail to get a reservation at one of the more popular places in town.
Posted by Smiling Lion