The last time we were at the three Michelin-starred Caprice for dinner, we didn't really have much of an appetite and I was, that night, constantly distracted by work calls which required me to leave the dining room to take calls frequently (see earlier review: Caprice). Despite that, we had a very good meal here and wanted to come back to try to have a proper uninterrupted dinner here for once. Similar to last time, we were given a really nice table by the window overlooking Hong Kong harbor and Kowloon. The iconic ICC building on the Kowloon side had constantly changing colored lights as its skin which kept us entertained for much of the evening. It was a Sunday night but despite that, the restaurant was well patronized. 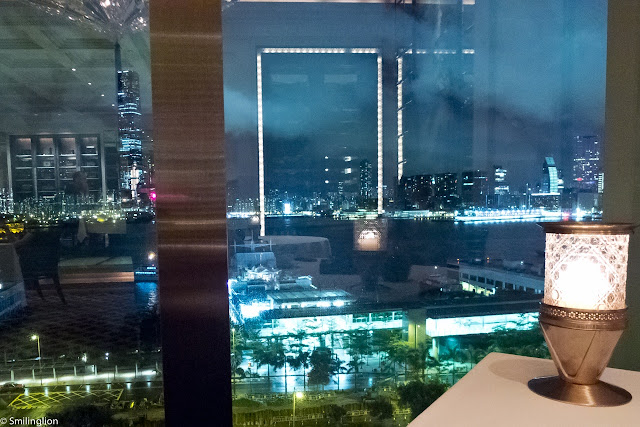 We opted for the degustation menu this time round (as we were feeling sufficiently hungry despite having the Amber Sunday Wine Lunch earlier that day). From the wine list, we picked a Morey-St-Denis which was surprisingly well-rounded and mature. We were served some gourgeres which were more like caneles with their springy and chewy texture. 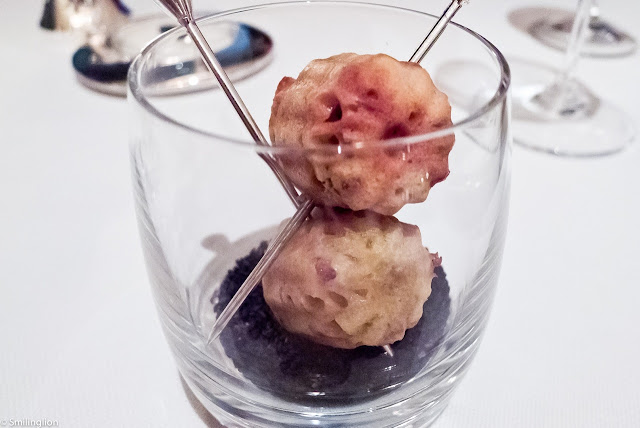 Veal Tartare Cannelloni, Marinated Vegetables and Caviar Imperial de France: The veal was excellent, although the caviar was overpowered by the raw meat and hence did not have the impact it was intended to have. We are generally not big fans of pairing caviar with red meat as the briny taste of both usually clash. 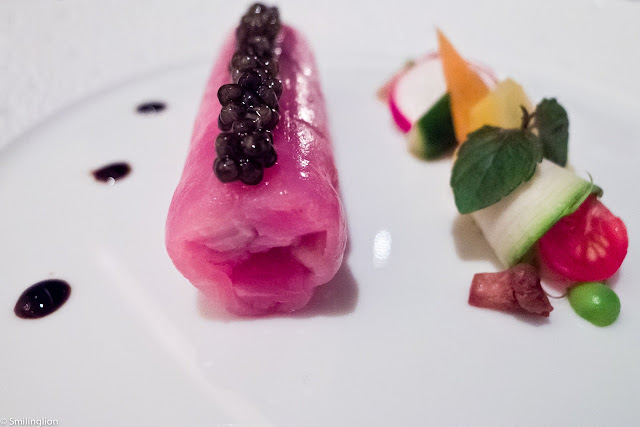 Tourteau Crab Tiramisu, Fruity Marinate and Tandoori Spices: Because of my allergy to beef (and by extension veal, although sometimes I make exceptions and suffer the consequences later), I requested to change the first course in the menu from the veal to this crab tiramisu. It was an inspired decision on my part as this was absolutely incredible. The crab meat was sweet, was topped off with a creamy foam and accompanied by a variety of fruits and fruit purees which brought both sweetness and tanginess to the dish. 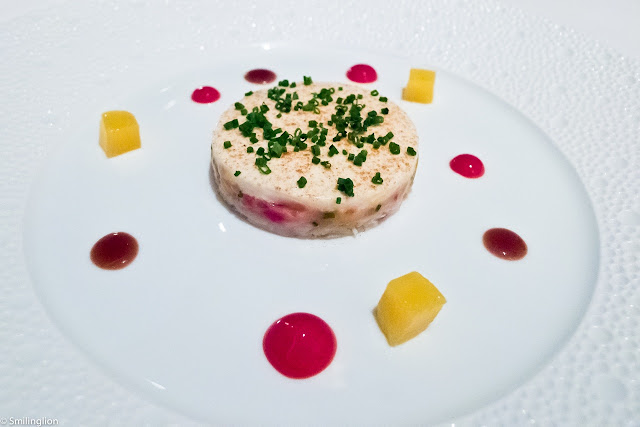 Brittany Lobster, Lemon Tarragon Mousse, Shellfish and Tomato Jelly: Generous chunks of lobster were perfectly matched with a light shellfish and tomato emulsion (not sure where the jelly was - perhaps it was a thin film at the bottom). It was a very well executed and an excellent dish. 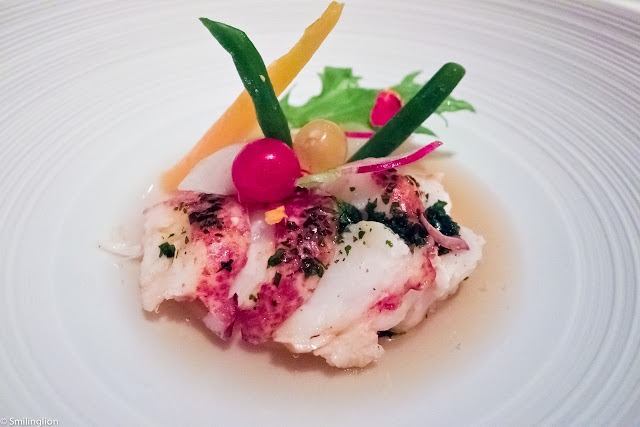 Watercress Veloute, Frogs' Legs and Onion Confit Bruschetta: Another dish which we loved. The watercress veloute was unique and the frogs' legs were juicy and succulent. Unusually, the onion confit was a flat disc sitting below the bread, which we didn't see till we picked the bread up, and it looked like it was put there to keep the bread from sliding around the plate. 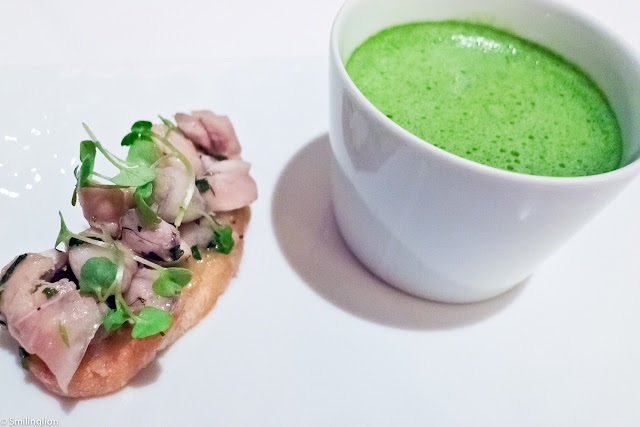 Wild Sea Bream, Trumpet Zucchini, Nicoise Black Olives and Sea Urchin: The fish was cooked immaculately, being nicely charred on the outside and soft and juicy on the inside. Each of the ingredients wasn't very special on its own (in particular the sea urchin, which was cooked), though when eaten together, the myriad of flavours came together wonderfully in the mouth. 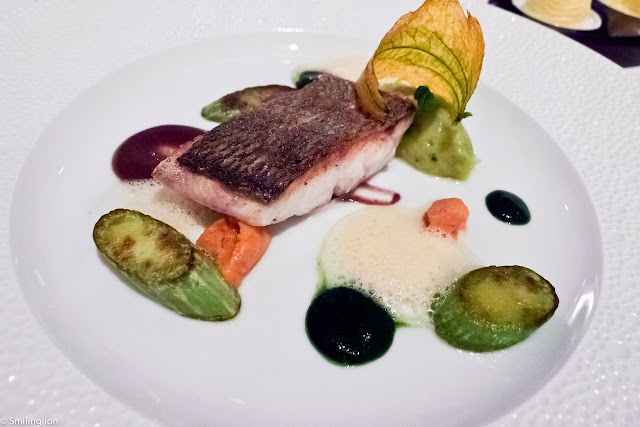 Stuffed Lamb Rack with Fennel, Sweetbread and Chanterelle Mushrooms: The sweetbread was wonderful and the chanterelle mushrooms were a favourite, but the lamb, though classically and well cooked, was rather boring. This resulted in the dish being slightly unbalanced as the sweetbread, rather than the lamb, took the headlights when it should be the other way around. That said, I'm being too critical as it was nonetheless a very good main course. 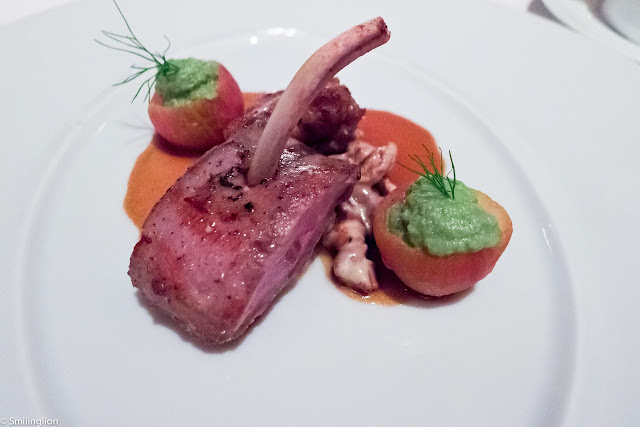 Challans Duck Fillet, Parmentier, Jardiniere Vegetables and Apple Chutney Sauce: The duck fillet was fantastic, especially with the apple chutney sauce which balanced out the otherwise gamey flavour of the bird. The parmentier was a kind of shepherd's pie served separately in a bowl, and was essentially a layer of rich and creamy mashed potatoes over shredded duck meat. 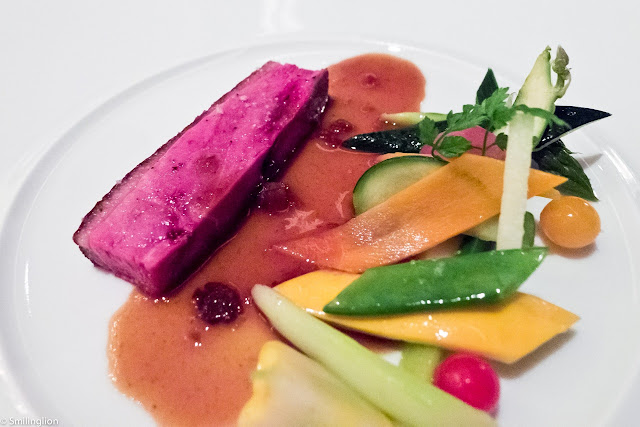 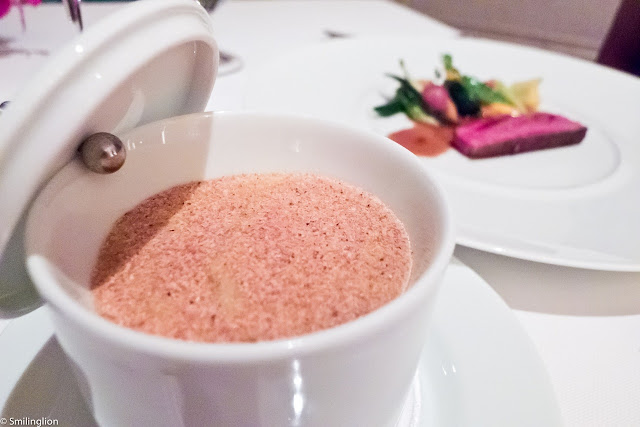 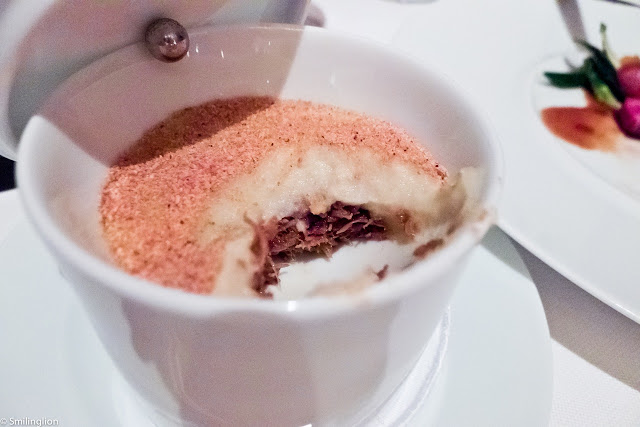 The Caprice cheese plate is acclaimed to be the best in Hong Kong (Caprice gets its cheese from Bernard Antony, a renowned cheese supplier) and it did not disappoint, especially the 48 months aged Comte which was probably one of the best we've ever tasted. 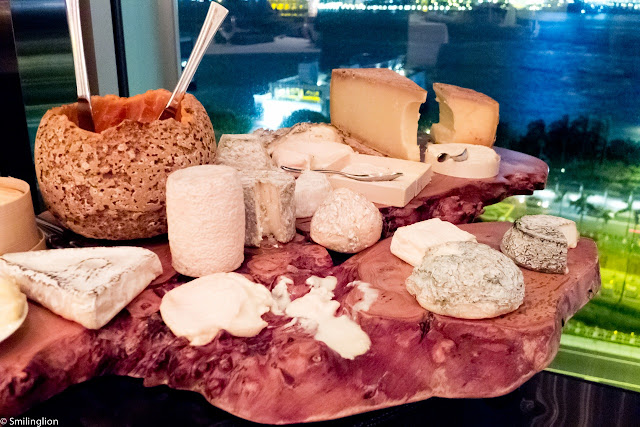 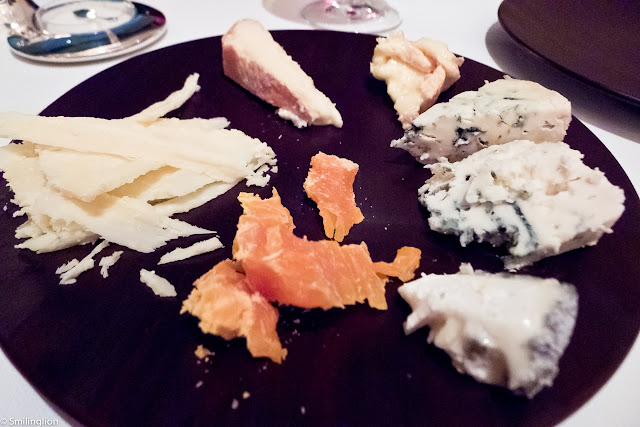 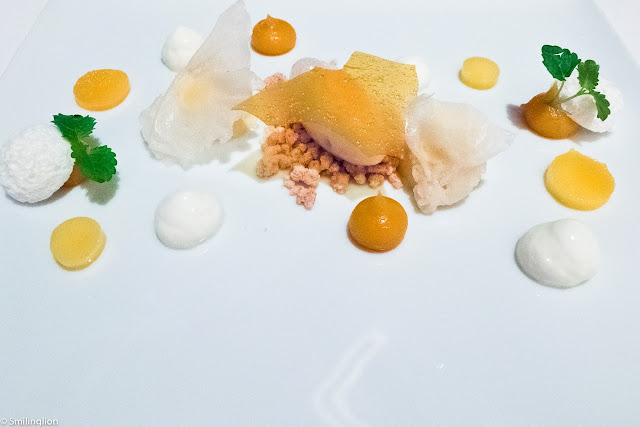 Jivara Chocolate, Apricot and Aromatic Thyme: An elegent dessert, the chocolate was encased in a crunchy casing sitting on a (slightly too sour) apricot square. 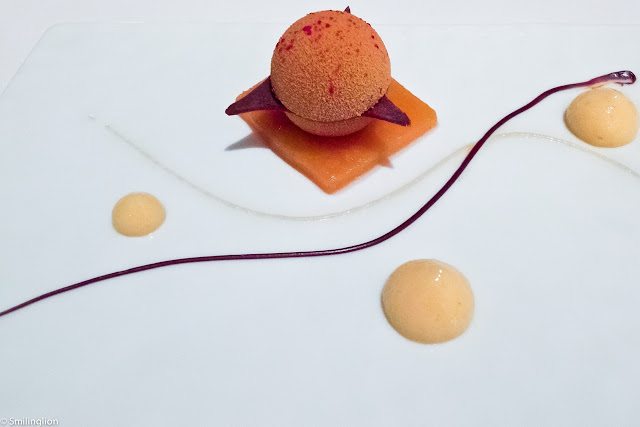 Mignardises were served together with coffee/tea to round of a superb meal. 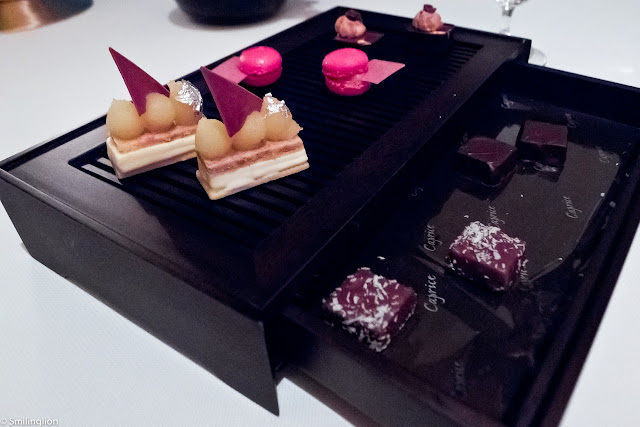 Final Thoughts: We felt that our meal here was truly of three Michelin star standard. Every course was excellent and solid, the service was impeccable and the views out of the window from our table were spectacular. Yet the restaurant wasn't stuffy and dining here was a really enjoyable experience.
Posted by Smiling Lion