Update: Cut was awarded 1 Michelin Star in the inaugural Michelin Guide for Singapore in 2016.

This was the second time for us at Cut. The first was within the first month after it first opened, almost 2 years ago. Being put off by a variety of things, namely the high price, snooty service and loud music at the restaurant during dinner, we stayed away for a while, but given the passage of time, we thought it warranted another dinner there to see if our initial impressions were fair.

To a large extent, we were pleasantly surprised by how much more we enjoyed our dinner there this time. One of the reasons was perhaps that the music levels were lower this time than we remembered it (or maybe we were getting deafer by the years). Cut is a modern New York steakhouse, which means that it is expected to be a cross between a hip bar and a restaurant. Contemporary pop or house music is customarily blared through its speakers, and it is as common for guests to be sipping their cocktails as it is for them to have their red wines with their steaks. Loud chatter can be heard all around as people inevitably find themselves shouting at each other to be heard over the volume of the music. The problem we had the first time here was that the music was just too loud. We couldn't talk to each other properly but worst still we felt that it interfered with our ability to taste our food. This time it was a lot better, and we were able to enjoy the music a lot more without feeling that we were going deaf. 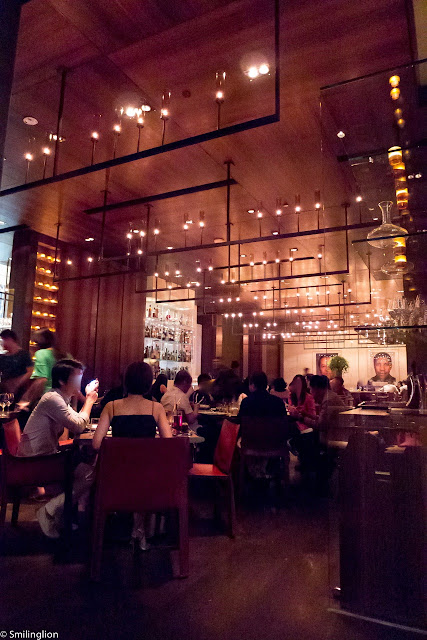 Service-wise, we felt that this time was much better as well. Perhaps the initial hype during the opening of the restaurant (with its celebrity veneer) could have played a part in the way service staff carried themselves in the early days, but we felt much better taken care of this time (service was prompt, friendly and helpful this time round), with our waiter being patient enough to explain items on the menu and to help us pick the wine. Before we ordered, we were served with some cheese puffs (gougeres) and bread sticks, which went well with the excellent cabernet sauvignon we ordered (the 2006 Meteor from Napa Valley). 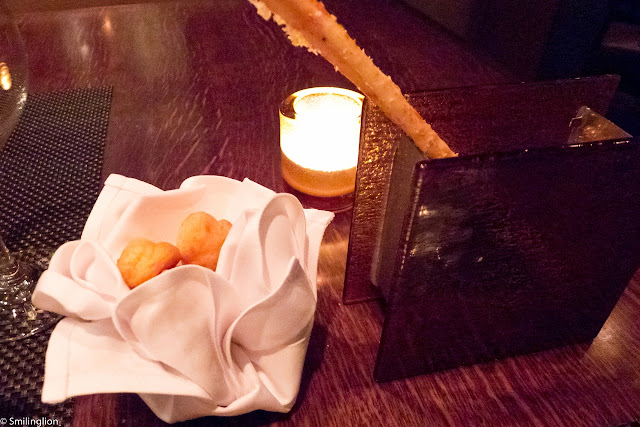 Our food choices this time were with the benefit of hindsight. In the spirit of a traditional steakhouse, the menu was on a single sheet of paper, which included the starters and different cuts of steak. The last time we tried the steak tasting menu which we thought was disappointing, and we realised that we are not big fans of wagyu beef cooked in the style of a New York steak, as it does not bring out the best of such a cut of meat - for example, cooking the very fatty and tender wagyu at such high temperatures burns the meat too easily. Also, we found that the smaller pieces of beef (the tasting menu consisted of three smaller pieces of sirloin steak, i.e. the USDA Prime, the Snake River Kobe-style and the Shiga Wagyu) tends to be more easily overcooked than a regular-sized steak. We feel that Japanese beef is best expressed by cooking it on a teppanyaki grill, and in smaller portions, as the meat is usually more fatty and tender (so does not do well when cooked to high temperatures and may be too overwhelming if served in large portions). 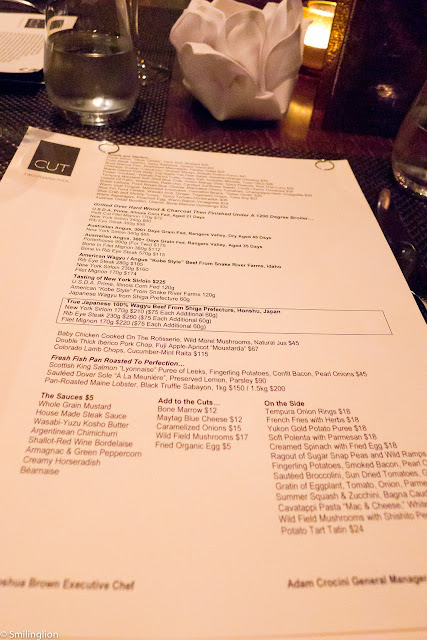 The bread served was of a high standard, and not out of place in a fine dining restaurant. The brioche in this case was particularly good. 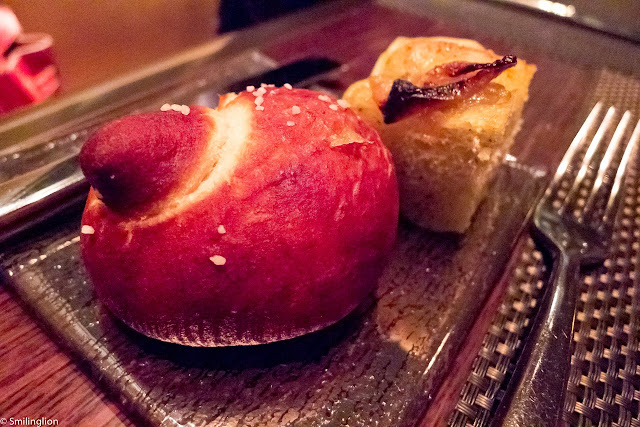 For the starters, we had the Prime Sirloin Steak Tartare with Herb Aioli and Mustard (accompanied by a raw quail's egg), which was very nicely done. The meat was quite finely chopped and very fresh with the right balance of mustard and lime without overpowering the flavour of the raw beef, and the chopped onions brought sweetness and some crunch to the dish as well.. 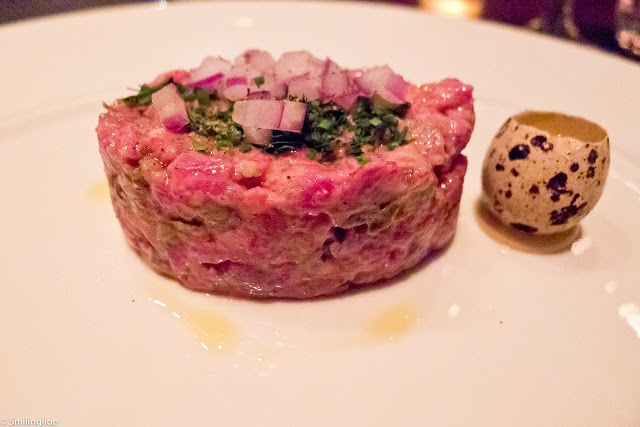 We also had the Butter Lettuce, Point Reyes Blue Cheese, Marinated Cherry Tomatoes and Champagne-Herb Vinaigrette which was well put together. 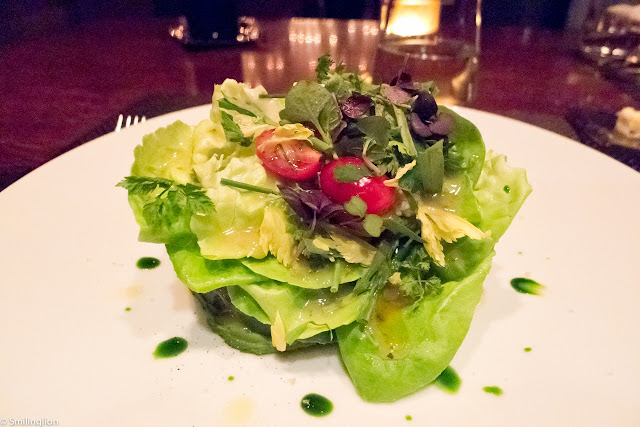 The point of the entire dinner was the steak, and it was a good cut of USDA Prime New York ribeye, quite substantial of size (just under 400g) and tender and juicy. The ribeye was grilled and finished over a 1700 deg C broiler. However, we found that the surface was too heavily charred by the broiler resulting in the outer crust of the steak being too bitter (and had to be scraped off before eating). For that reason we would have preferred it not to have been charred too black. The side order of cream spinach was excellent though. 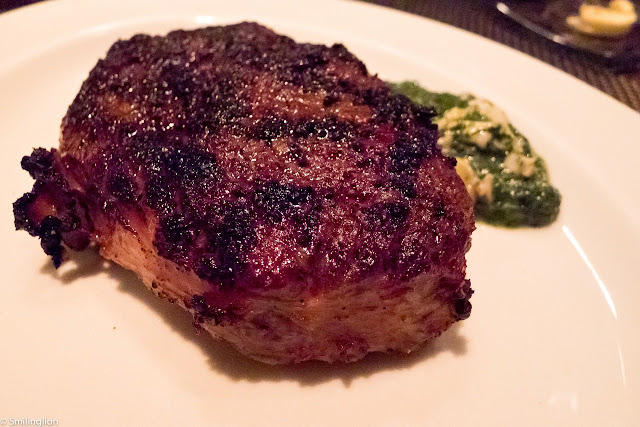 For dessert, we had the Strawberry Millefeuille which was slightly flat, in our opinion, The pastry was too thick and rather moist, and though it was overall acceptable, it wasn't terribly exciting nor memorable. 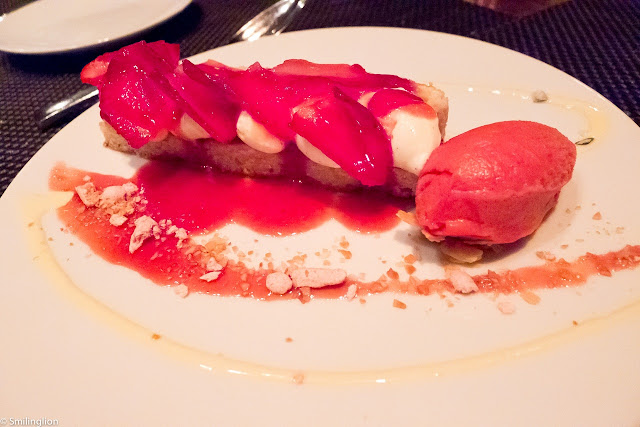 Final Thoughts: We had a good meal here this time, and enjoyed the music and cool contemporary vibe about the place. The food was good (though rather expensive) and our dinner was enhanced by a good choice of claret (with the recommendation of the sommelier). But to be critical, we felt slightly let down by the way the steak was cooked. Maybe it just wasn't of a style to our liking, and for the steak alone we prefer the ones done at Morton's.
Posted by Smiling Lion