It was the most curious thing to find a French fine dining restaurant like Pierre Gagnaire in Seoul, where we had the impression that European fine dining hasn't really caught on. Our last visit to a supposedly top high end modern restaurant in Seoul which was mentioned by the San Pellegrino World's Best 100 Restaurants of the World website, Elbon the Table, though decent enough, was underwhelming if compared against the best restaurants in Asia.

In addition to that, our rather poor experience at Pierre in Hong Kong, despite the fact that Pierre Gagnaire was there himself that night, made us cautious about setting our expectations too high. There also seemed a lack of any good reviews on the web about the Seoul Pierre Gagnaire, so we 'bravely' took the plunge into the 'unknown' to see if there was any good reason why no one seems to be talking about this restaurant. 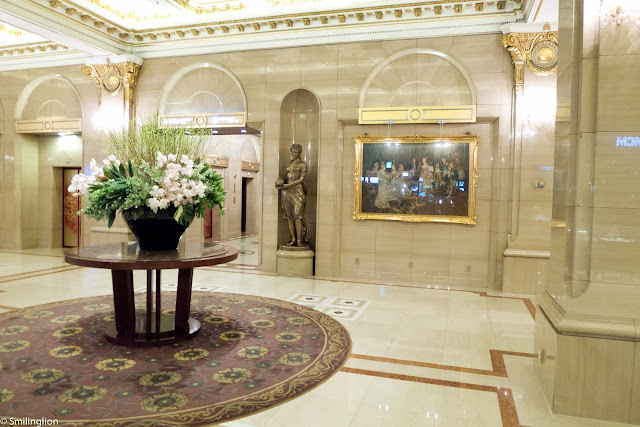 Like the Hong Kong one, Pierre Gagnaire Seoul is located on the top floor of a luxury hotel with great views over the city. The Lotte Hotel sits at the heart of the bustling Myeongdong area of Central Seoul, and the restaurant can be found on the 35th floor of the new wing of the hotel. Andy Hayler (a prominent food blogger) has written that the higher up the restaurant is, the lower the food quality tends to be. We hoped that this would prove an exception to that saying.

Interestingly, in Seoul apparently people have dinner relatively early, and guests are encouraged to start dinner between 6-7pm with last orders at 9.30pm. Our initial reservation was at 8.30pm but after we learnt of this practice when we got to Seoul, we changed our reservation to 7pm instead. We are generally quite used to eating late (when we were in New York for our previous trip, some of our dinners started past 10pm!) and in Seoul we had to adjust our entire eating schedule to accommodate an early dinner (which meant earlier lunches and less late afternoon snacks!). 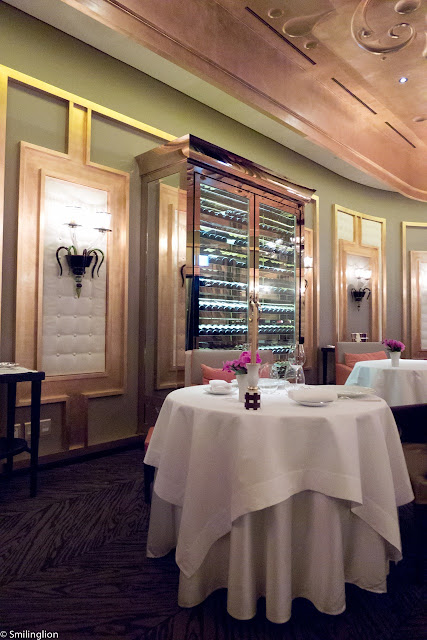 When we got there, the restaurant was empty with only one other table occupied. We were very warmly welcomed by the restaurant staff and led to our table, which was a large window-facing one; easily the best seat in the house. The views overlooking the city were spectacular and the interior of the restaurant was no less stunning; gold colored walls and ceilings with glittering chandeliers gave a sense of opulent luxury. The staff consisted of English-speaking Koreans with one French maitre d' and service throughout the night was flawless. The wine list was not very impressive though, it lacked depth and the markup was quite high. I picked out one of the cheapest wines on the list, a Vosne Romanee Premier Cru (which was still rather expensive) and it was decent enough to accompany our dinner. 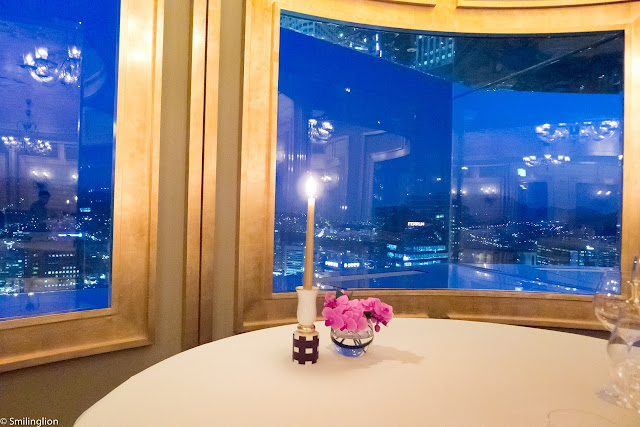 One feature of our experience here was that the food came out at a very brisk pace (which we like), although this could be influenced by the fact that there were only 3 tables throughout the night (unusual for a Friday night, we would have thought). Barely seconds after we sat down, the many amuse bouche and canapés were served. These included things like savoury cream puffs, beetroot tarts, puff pastry with deep fried scallop, peanut ball and spanish ham. 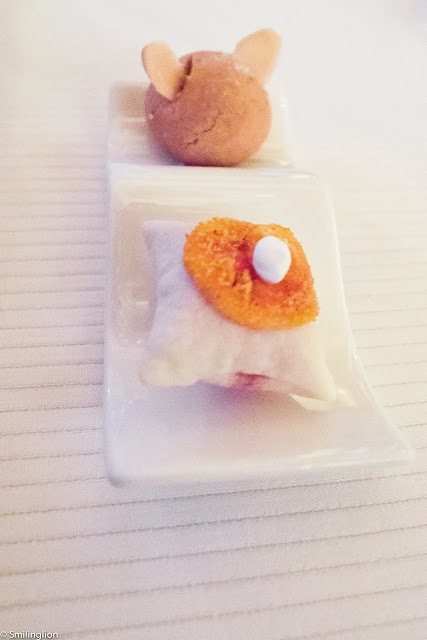 We thought the long metal spoon on which the spanish ham was served looked familiar. It was similar to the one serving the popcorn at Andre. The amuse bouche, together with the large glass of champagne we were served (the Bollinger Brut), were lovely. 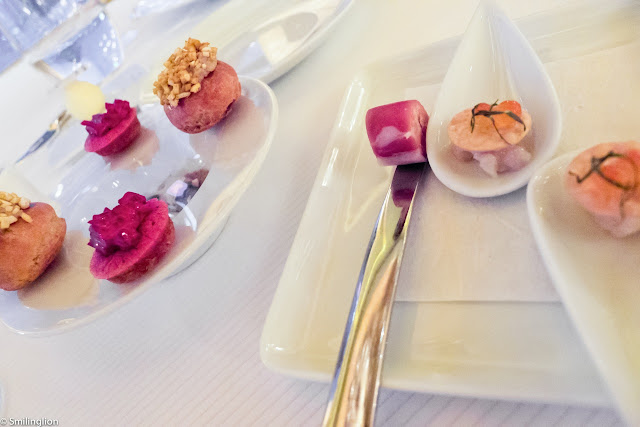 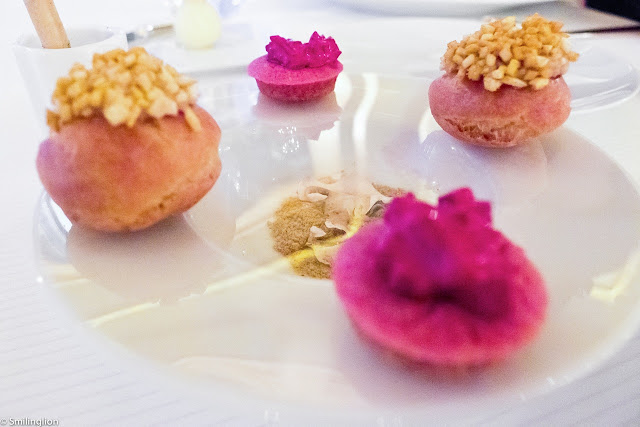 The bread was quite accomplished, especially the sliced English muffin and the brioche. 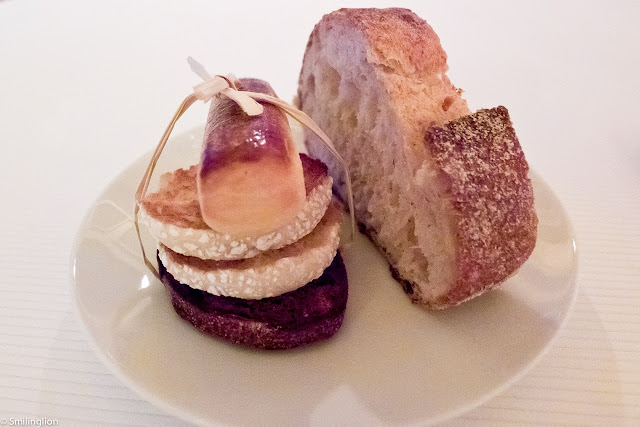 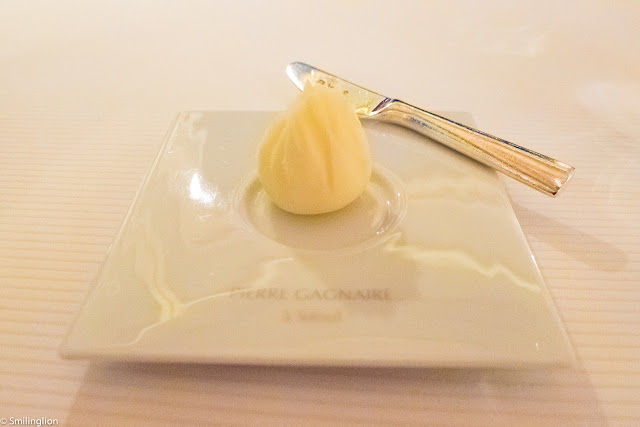 It seemed that the Pierre Gagnaire style (we haven't been to the flagship Paris one though), was to serve multiple dishes at one go for each course, and this was a theme consistent throughout the evening. Unlike some chefs who may have 2 or 3 different things on one plate, in Pierre Gagnaire, each item will appear on different plates (usually 3) which when taken together is supposed to form one course. Although this means that the chef is not constrained by space (which would otherwise be the case if everything needs to fit on one plate), it results in our table feeling quite cluttered and it is quite messy eating from 3 plates at the same time. The question arises whether you finish one plate, and switch the empty plate with the next one or adjust your body to eat at each plate without moving them. All too complicated and inelegant for a fine dining experience. To give an example, the next 3 dishes were served all together on relatively medium to large plates/bowls next to each other. Fortunately we had a large table.

Bang oe corolla coated with sesame paste: This was a very exquisitely prepared raw fish carpaccio with an interesting sesame sauce and crunchy raw leaves which looked like they were frozen. 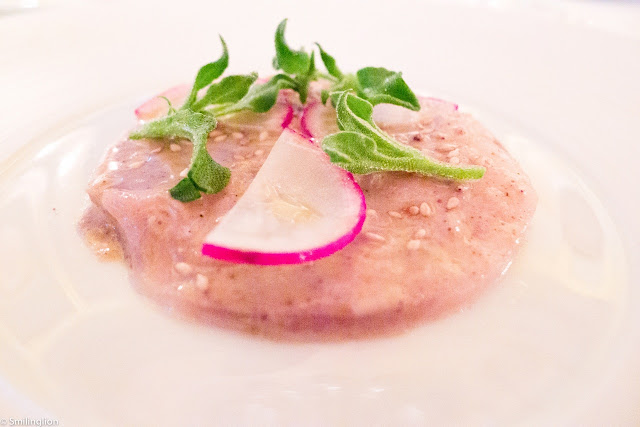 Crab meat, smoked adji, celeriac remoulade with turmeric: Nicely put together, with the smoked mackerel adding a savoury touch to the otherwise sweetness of the crab meat. The hint of turmeric brought an Asian flavour to the dish. 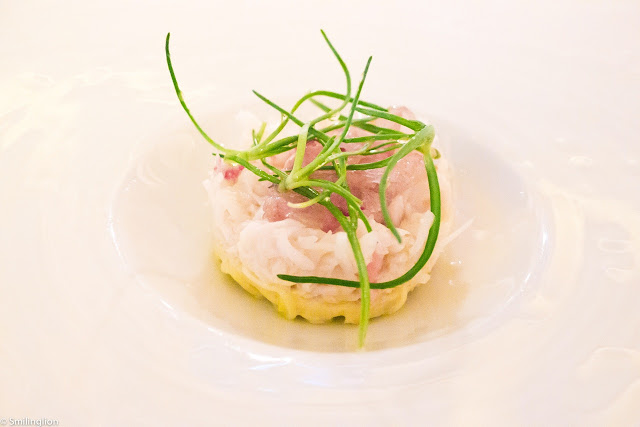 Scallops with Korean beer mariniere: Not our favourite dish. The scallops lacked punch and the beer sauce, though with an interesting frothy texture, didn't create enough flavour for the otherwise bland scallops. 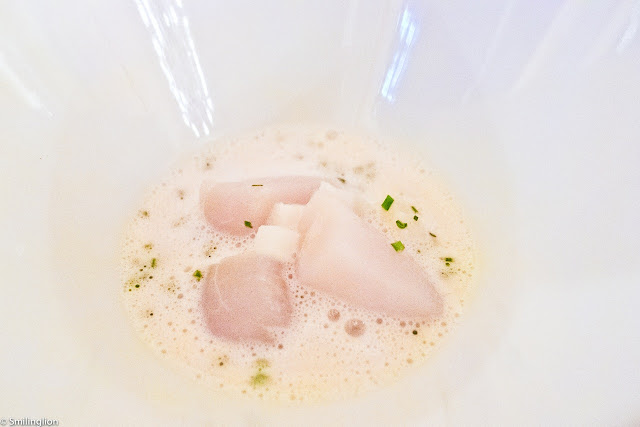 Thin slices of lobster seized in a nut-brown butter, baby carrots with golden celery glazed in apple cider, nutmeg cauliflower cream: A wonderful dish. Vegetables cooked in a delightful cider sauce, with a perfectly butter-poached lobster and an interesting cauliflower cream which at first glance looked like a dollop of oatmeal. 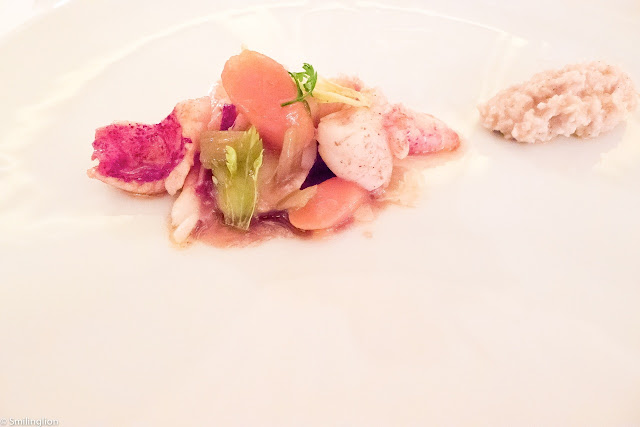 Coral cauliflower sommites: To carry on the cauliflower theme, a smaller plate accompanied the lobster dish, containing some sauced cauliflower on a thin crepe. 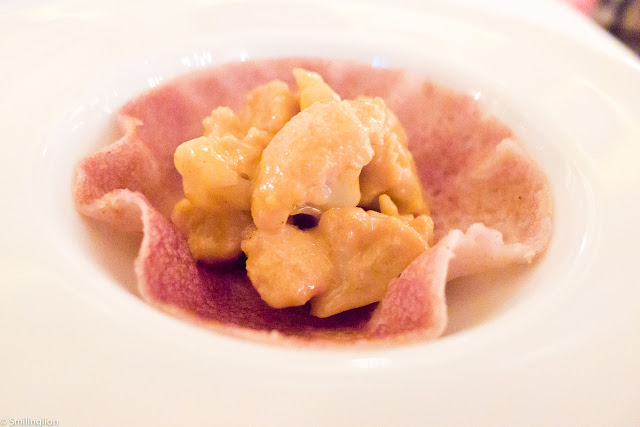 Tandoori veal sweetbread, melted endive, pineapple and confit lemon, thin slice of date: The sweetbread was tender and delicious, and the tandoori flavour, though apparent, did not overpower the dish. The lemon confit served to temper some of the gamey taste of the sweetbread. A very good main course. 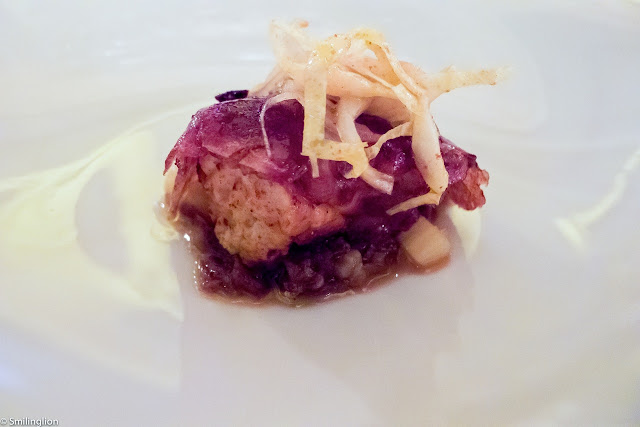 Poached wild sea bream in oven, crispy avocado, Seoul condiment: Perfectly poached sea bream with the right firm texture yet not overcooked. The 'Seoul condiment' was a bed of Korean vegetables and sauces which went very well with the fish. The tempura avocado was also an interesting addition. This was our favourite dish of the evening. 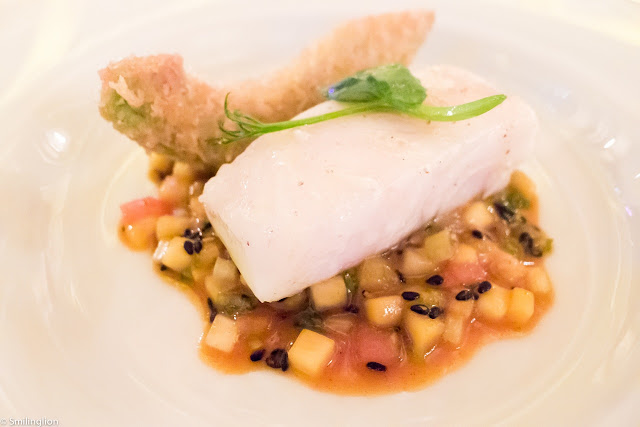 Grilled beef fillet, wrapped in black pepper, split peas veloute, baby spinach: A close second for the best dish of the evening. The beef was tender and juicy, with a rich pepper and red wine jus redux and a subtle pea veloute beneath it. 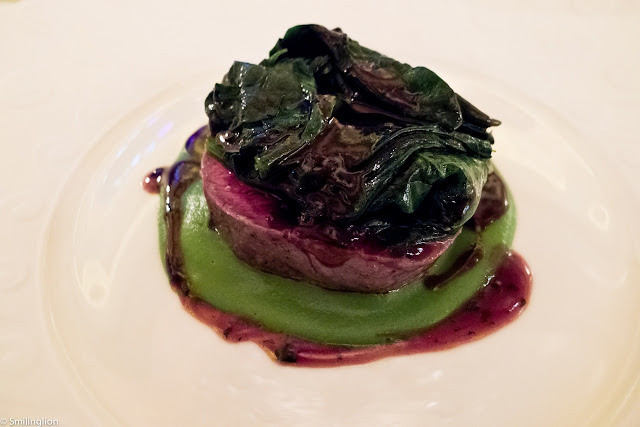 Julien's potatoes (marrowbone, snails): Accompanying the beef was a side dish of snails and bone marrow sauce (hidden in the photo under the thinly sliced potatoes) which was worthy of being a standalone course. 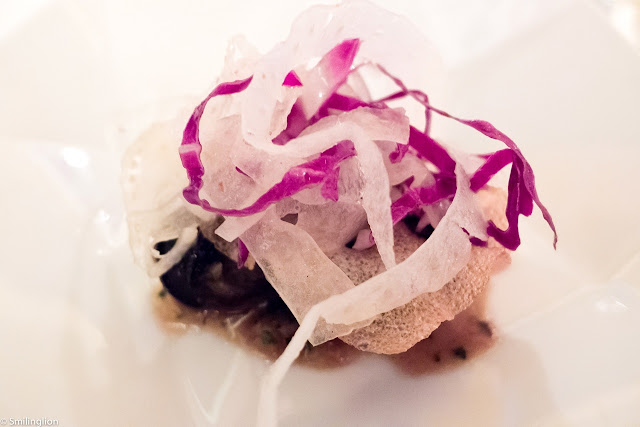 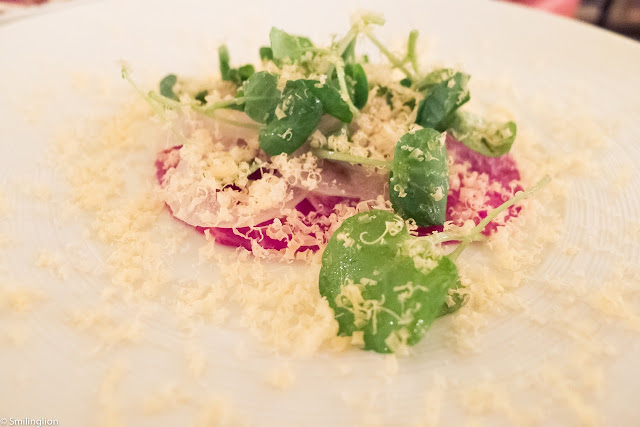 Gruyere cubes, coconut milk yogurt, white chocolate pearls: Instead of the traditional cheese board being brought out, we were instead presented with a trio of cheese creations. The first was a very interesting glass bowl of gruyere cheese cubes and white chocolate bits, a curious combination which worked. 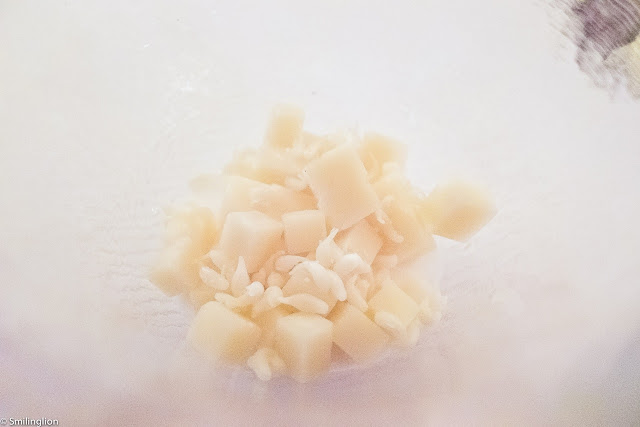 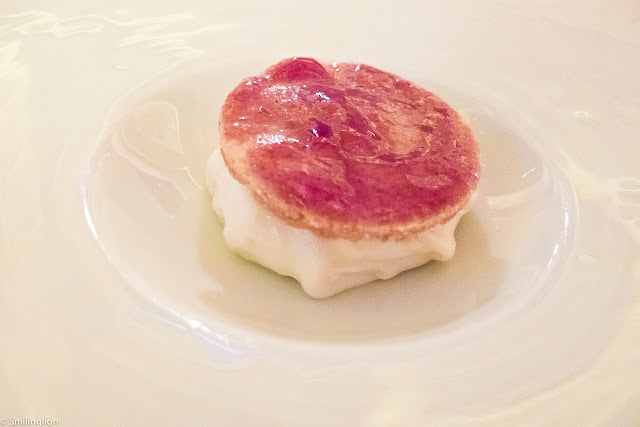 Bleu d'Auvergne terrine, litchi; clementine orange syrup: The third cheese, the blue cheese with orange syrup was a bit of a disappointment as the syrup was unbearably sour, especially bringing out the natural acidity of the blue cheese. There wasn't enough litchi (or lychee) on it to counter the sourness with sweetness. 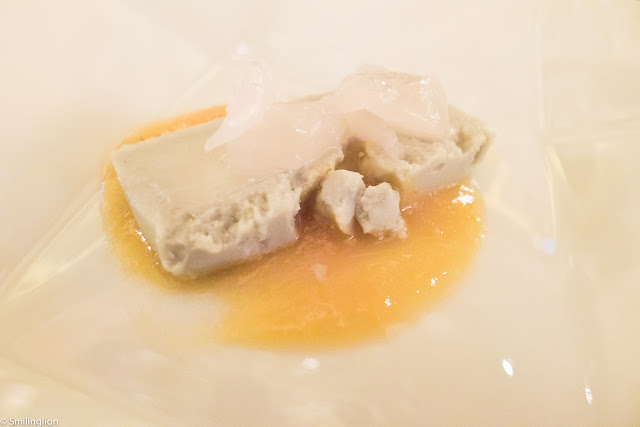 Desserts were named simply as 'Pierre Gagnaire's Desserts', about which we were apprehensive because of our disappointment with the similarly named desserts at Pierre in Hong Kong. However, our fears were unfounded this time because the series of desserts this time was excellent. Once again a trio of dishes were served at the same time, starting with the green tea and pistachio macaroon. 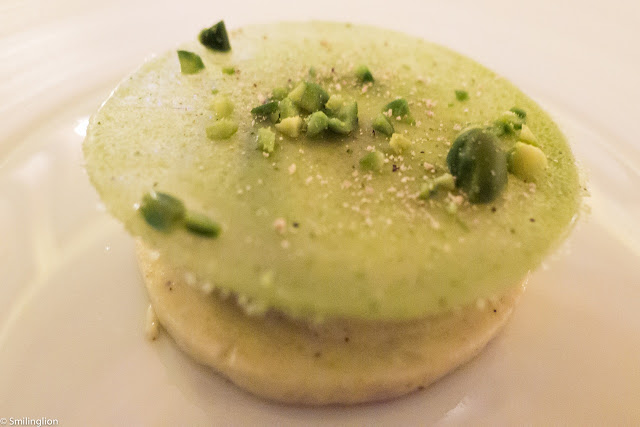 The second was the poached pear with raspberry sauce. 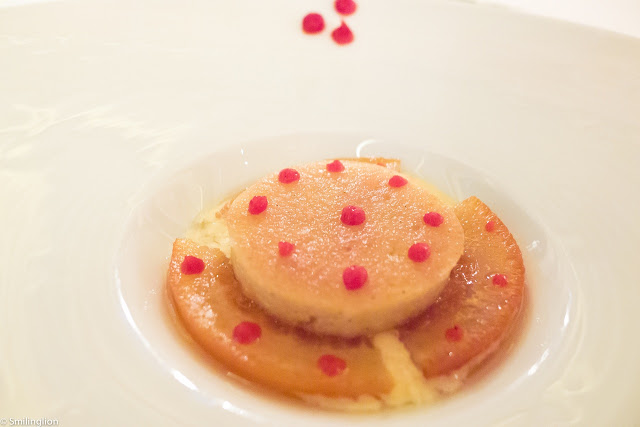 And rounded off with the refreshing yet exotic ginseng ice cream with cookie crumble. 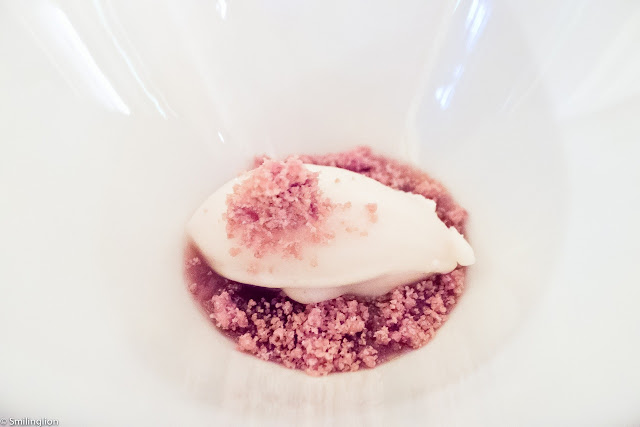 Next was a standalone dessert of pineapple and meringue. 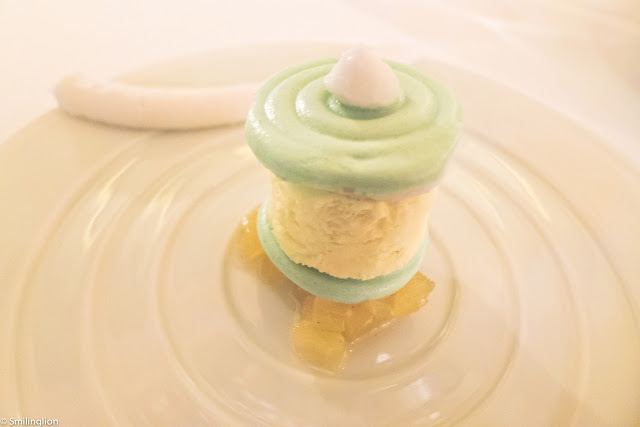 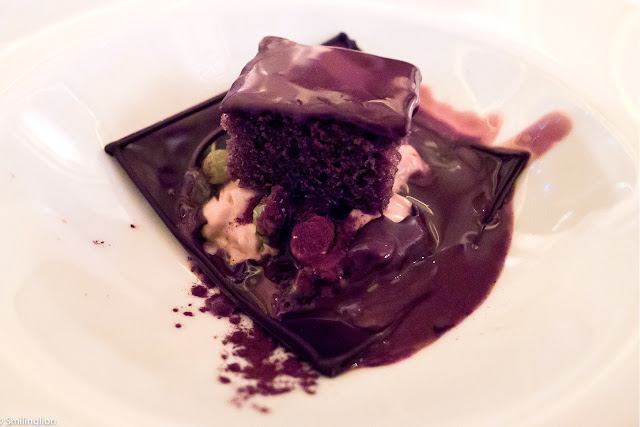 Petit four was accompanied by a herbal tea with an after-dinner mint floating in it (quite an interesting concept). 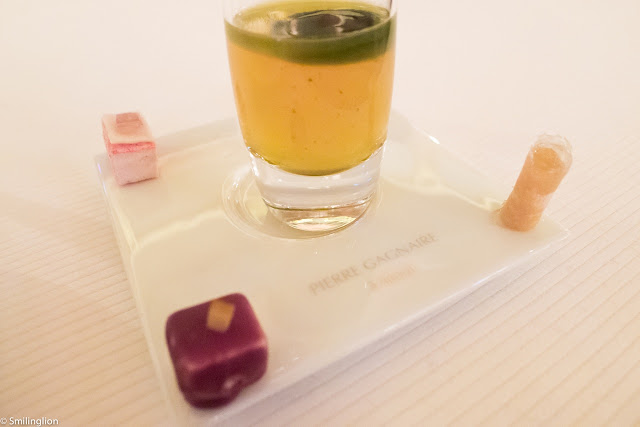 Final Thoughts: This was a thoroughly enjoyable dinner with most of the dishes of a very high standard. Many of the dishes were very clever and managed to incorporate local ingredients and tastes. Service was impeccable as well and we could enjoy the views overlooking Seoul from our table. From our experiences alone, we thought that this was so much better than the Hong Kong Pierre (even though you could argue that the Hong Kong one has better views, i.e. overlooking the harbour). We were surprised that even though it was a Friday night, the restaurant was less than half full. For a restaurant of this standard, in any other developed city, tables are very much sought after especially for a weekend dinner.
Posted by Smiling Lion