Said to be one of the newer and hippest dining destinations in Seoul, Jungsik brands itself as a modern Korean restaurant serving Korean food prepared with European cooking techniques. It is named after the chef himself, Jungsik Yim, who trained at the CIA (Culinary Institute of America) and worked at several New York restaurants before returning to his roots in Korea and opening this restaurant. Ironically, we did not know about this place until we read a review about his second restaurant which he opened in New York, in one of food blogs we follow (Donuts4Dinner). That writeup had marvelous pictures of the food there and a raving review of the meal, so it was a no-brainer that we were to try the original Jungsik while we were in Seoul.

Located in the hip and grungy yet high-end district of Sinsa-Dong just off the Rodeo Drive of Seoul, Apgujeong-dong, it is situated on the third floor of a low rise industrial building with no signs on the outside. In Korea, knowing the road names and unit numbers could be useless unless you know how to decipher them, and it's best to get the taxi driver to put in the address into his GPS to ensure that you get there after all. Suffice to say, even after we were dropped off in front of it, we had to walk around to ask the locals for directions as we didn't know which building this was in.

The interior was quite simple and sat a relatively small number of people (perhaps 30-40 persons) with a few small private dining areas. Its menu concept was not unlike that of Eleven Madison Park in New York, whereby aside from the usual tasting menu, there was also a design tasting menu. Of the five courses of Appetiser, Rice/Noodle, Main, Main and Dessert, you get to choose one of four or five choices from each category. Unlike Eleven Madison Park though, which asks what you would like to eat and what you prefer not to have for each dish (leaving some element of creativity from the chef to prepare something somewhat customized to your tastes), there is no such choice for the dishes you pick at Jungsik. 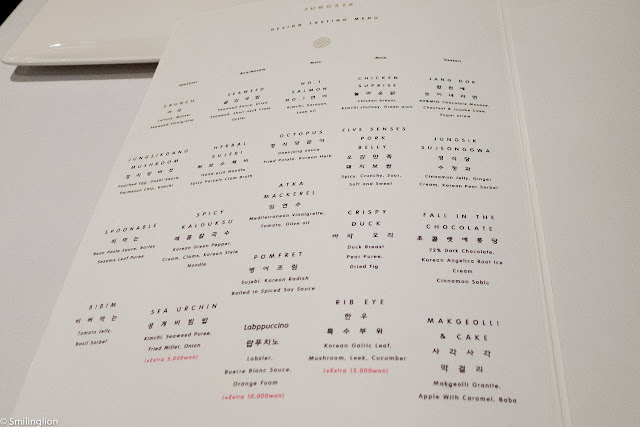 The amuse bouche was a very impressive start to the meal, both visually and gastronomically. The first was a glass bowl of smoked salmon in yoghurt and korean pickles, which was very nicely balanced. 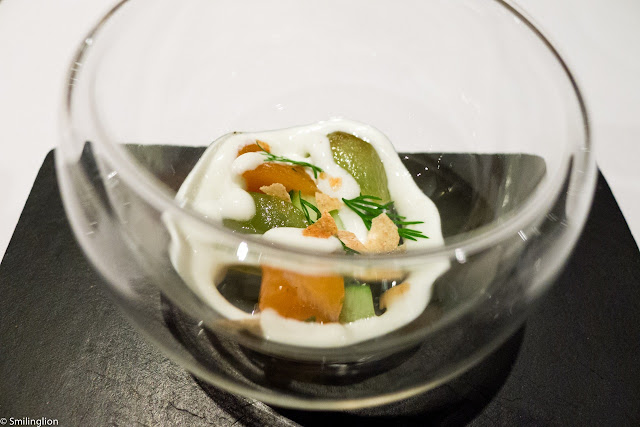 Then the millefeuille with foie gras cream, which was stunning. The pastry in particular was baked with the high standard expected of a pastry chef trained in the French tradition. 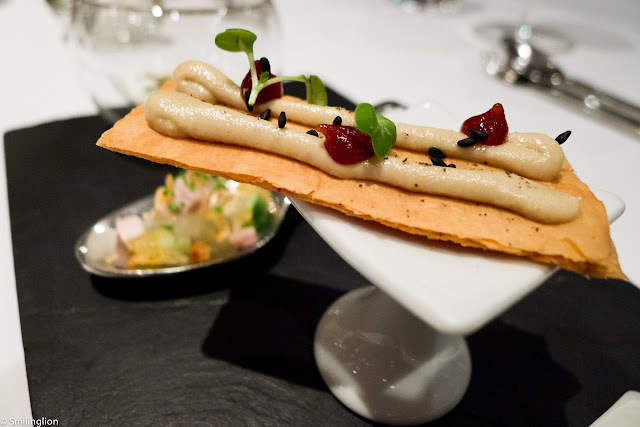 The bulgogi mini burger was a reminder of the Korean roots of this restaurant, although the memorable part of this burger was not the beef (which was very good nonetheless), but the burger bun which was very airy yet firm. 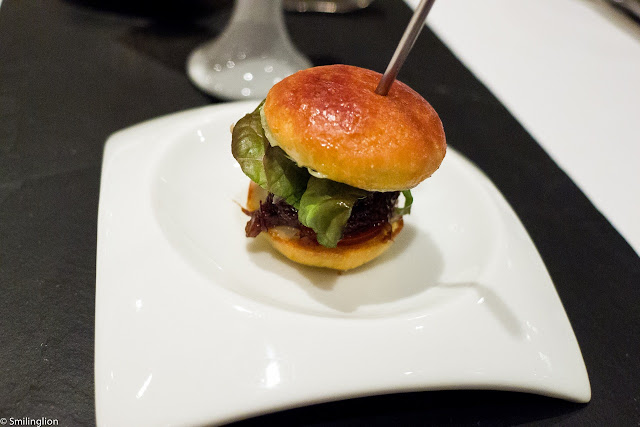 Finally, a spoon full of solidified chicken soup with some croutons and chives, an attempt at molecular gastronomy. This one wasn't that special. 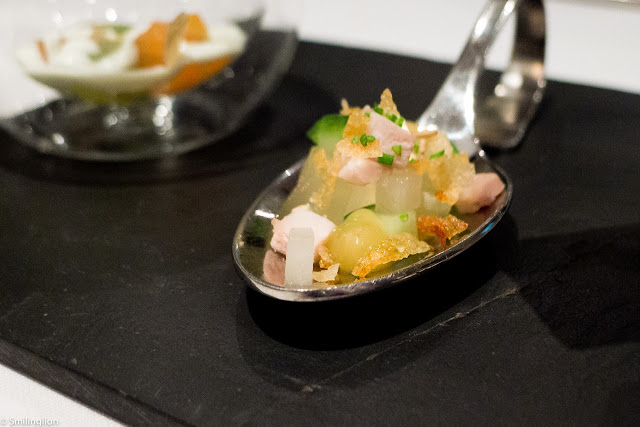 They had a decent enough wine list for a Korean restaurant, although the mark ups were high. We picked out a Chassagne-Montrachet Premier Cru which turned out to be a very good wine and paired well with our food. 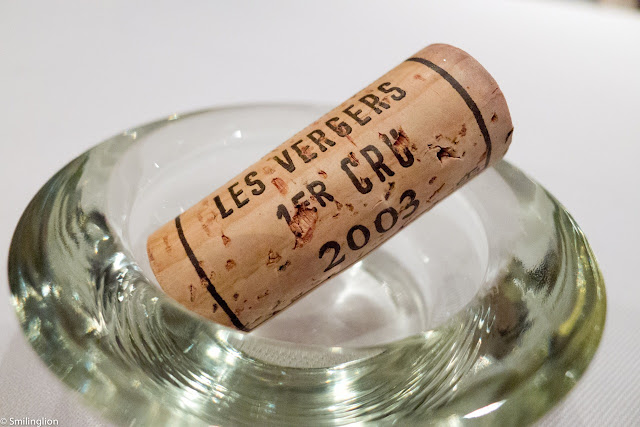 Despite amuse bouche being served, they were to serve another starter dish before they commenced our meal. It was the mung bean jelly with crustacean clear soup, which was very good. 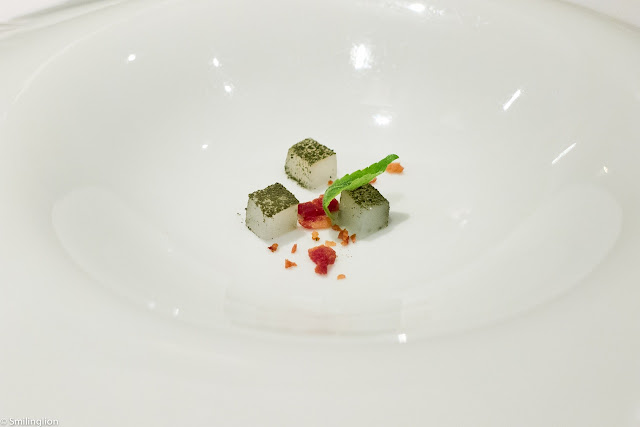 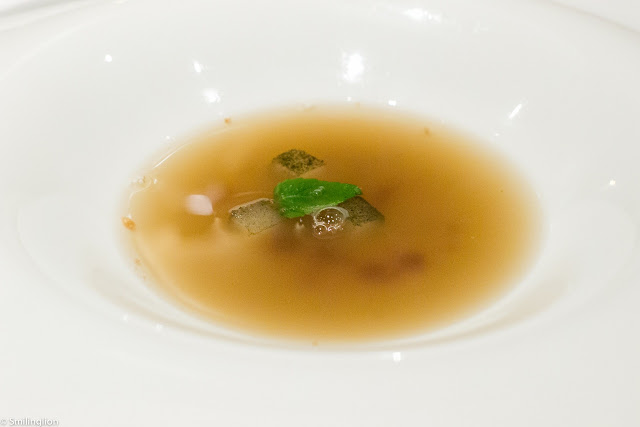 Jungsikdang Mushroom - Poached Egg, Dashi Sauce, Parmesan Chip, Kimchi: We both had the same starter (always a sucker for poached egg). It was a very good dish. 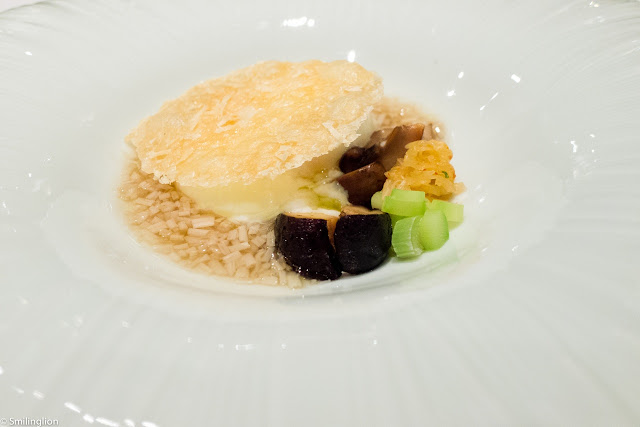 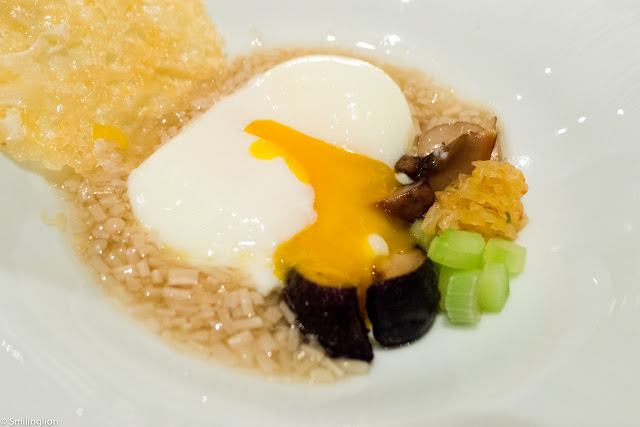 Spicy Kalguksu - Korean Green Pepper, Cream, Clams, Korean Style Noodle: This was quite nice (not spicy enough in my wife's view) but we couldn't help but think that the same noodle by the street side might taste better and more authentic. 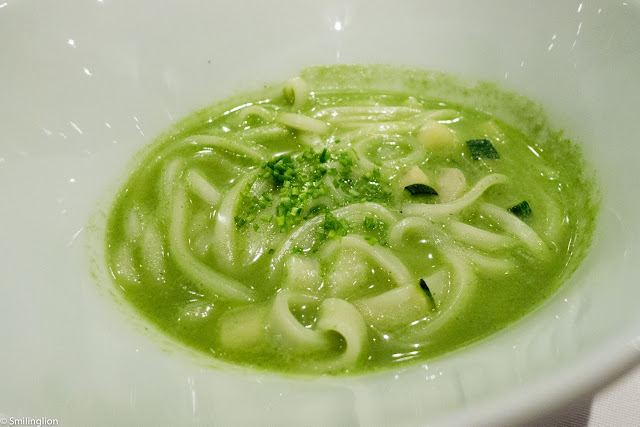 Herbal Sujebi - Hand Picked Noodle, Spicy Parsley Clam Broth: My dish was similarly colored (the green was from the basil) and the clam broth was quite nice, but with flat squarish noodle instead. But similar to my wife's noodle dish it didn't seem to belong to a menu of such high-end food. 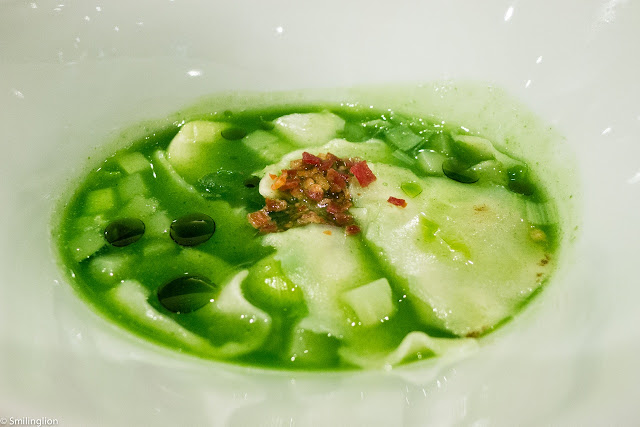 Pomfret - Sujebi, Korean Radish, Boiled in Spiced Soy Sauce: This was my wife's first meat dish. It was good if not particularly special. 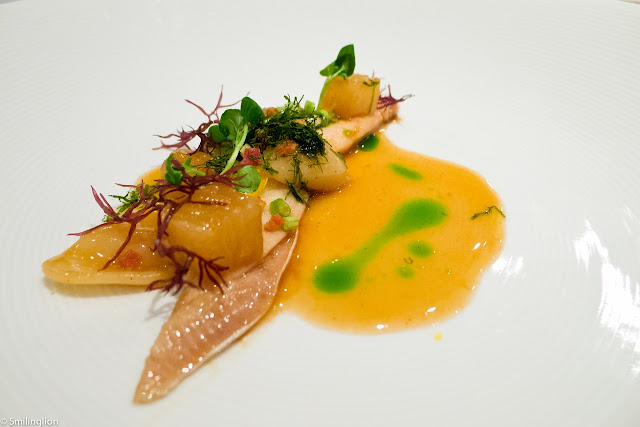 Octopus - Doenjang Sauce, Fried Potato, Korean Herb: This was my first meat dish. It was absolutely delicious. The octopus was grilled to perfection and this reminded me of a similar dish we had at Marea in New York recently (no faint praise for Jungsik, indeed). 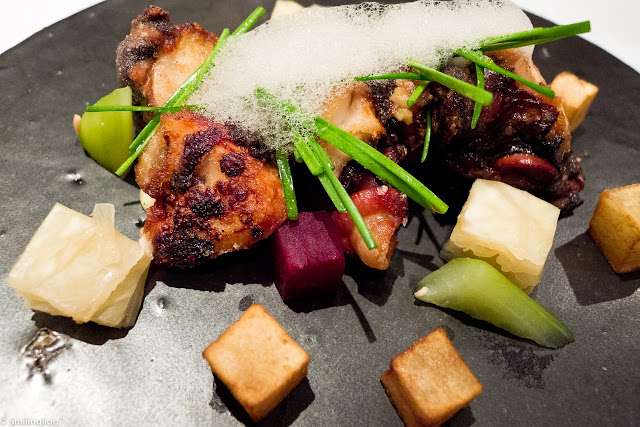 Five Senses Pork Belly - Spicy, Crunchy, Sour, Soft and Sweet: This was Jungsik's signature dish (with the goat's cheese foam) and it was every bit as good as was advertised. 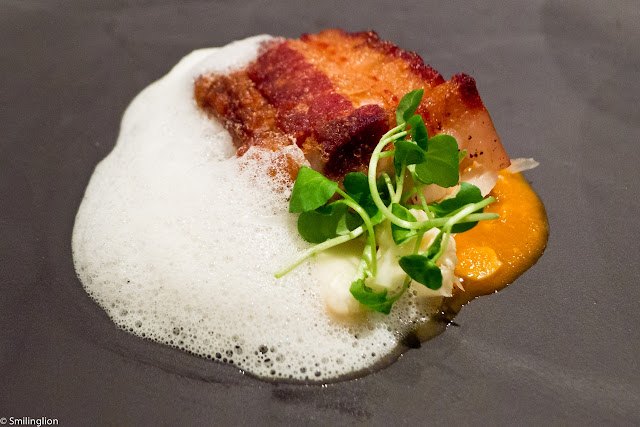 Crispy Duck - Duck Breast, Pear Puree, Dried Fig: I was being adventurous in ordering the duck breast. This is usually very risky as only the top restaurants can cook duck breast perfectly without causing it to be too overcooked and chewy. Suffice to say, I was very happy with my dish, and sauce in particular, was something I'd expect in a top French restaurant. 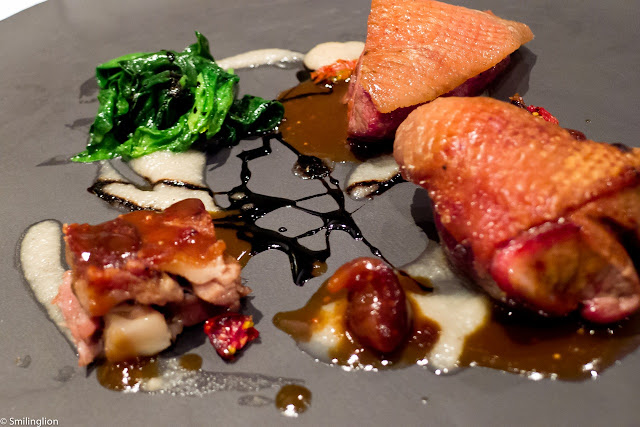 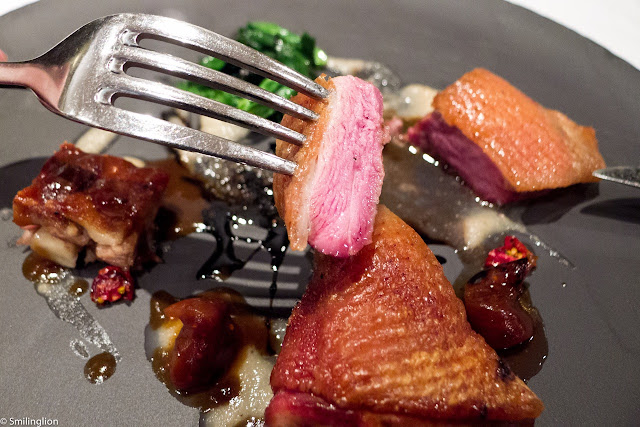 Pre-dessert was a very nice strawberry and yoghurt base and passionfruit and pineapple foam. 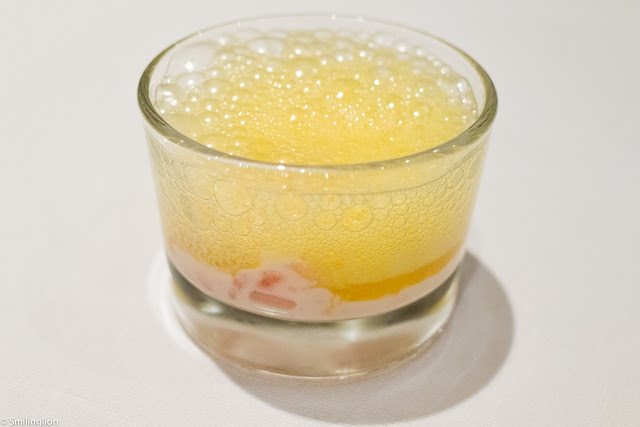 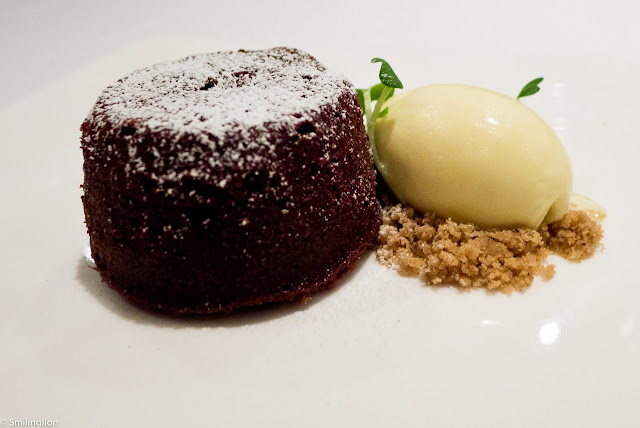 Jang Dok - 40% Milk Chocolate Mousse, Chestnut and Jujube Cake, Sugar Straw: Visual pretty dessert (looking like 2 eggs in a bird's nest), this tasted as good as it looked. All in all, we were very impressed with both the desserts. 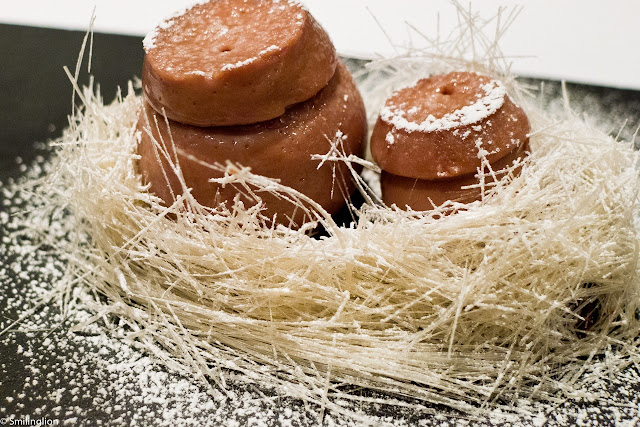 We were then served coffee and tea and I opted for an interesting Korean herbal tea from one of the leaves in the large test tubes presented to us. 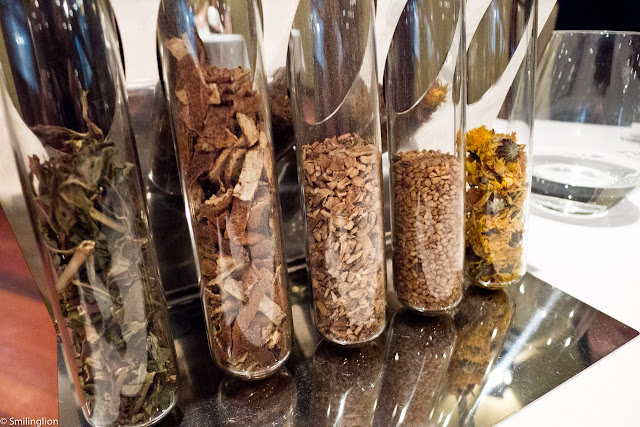 Petit four was a selection of Korean desserts prepared in a western manner and was a great end to the meal. 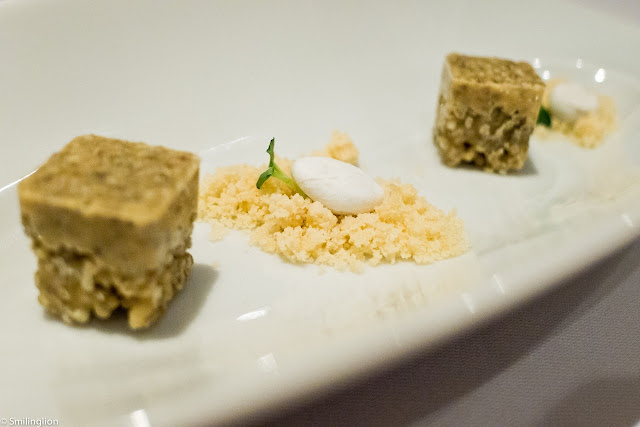 Final Thoughts: This was a superb meal prepared by a very talented kitchen. Service was also excellent and all the staff members spoke English well (rare in Seoul). Aside from the 2 noodle dishes, the other dishes wouldn't look out of place in the menu of a Michelin star French restaurant. Ironically, though Jungsik professes to be a modern Korean restaurant, if the same food (other than the noodles of course) were served in a restaurant like Astrance or Pierre Gagnaire or any of the other famous French restaurants, this could easily be deemed to be modern European with a Korean touch, such is the classical European techniques employed for the meal.
Posted by Smiling Lion