Update: Joel Robuchon was awarded 3 Michelin Stars in the inaugural Michelin Guide for Singapore in 2016.

It was our second visit to Joel Robuchon at Resorts World Sentosa Singapore, about 7 months after our first visit when we were quite impressed by the whole fine dining experience (see earlier review: Joel Robuchon). This is probably the most luxurious dining establishment in Singapore and has the quality of food and wines to match. We were also doubly excited about this dinner because we had just got our new camera (the Leica D Lux 5) which was supposed to be a low light and macro specialist and were very eager to try it out. 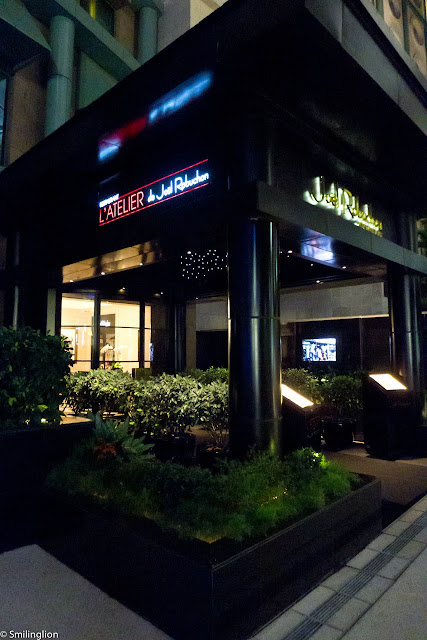 Joel Robuchon spared no expense in making its interior has elegant as possible. It seemed to us that the main theme of the interior was crystal: from a large crystal chandelier dominating the ceiling, to a variety of crystal vases and sculptures scattered across the room, to Baccarat crystal table lamps and glass crystals sprinkled on each table. In addition, the use of black and shiny lacquered surfaces of the walls and the table, paired with push cushioned chairs and the adornment of the dining room and each table of fresh large orchids completed the look of indulgence and opulence. 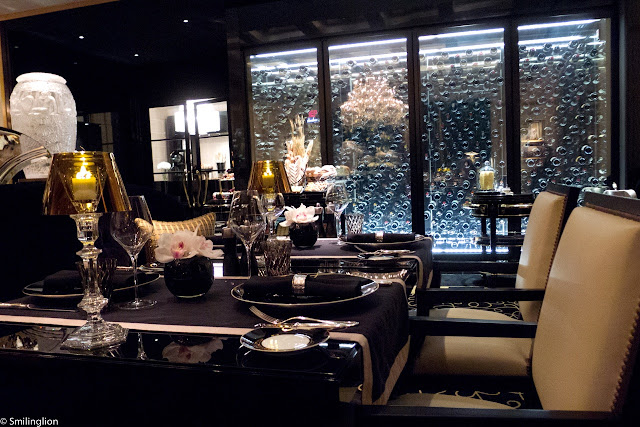 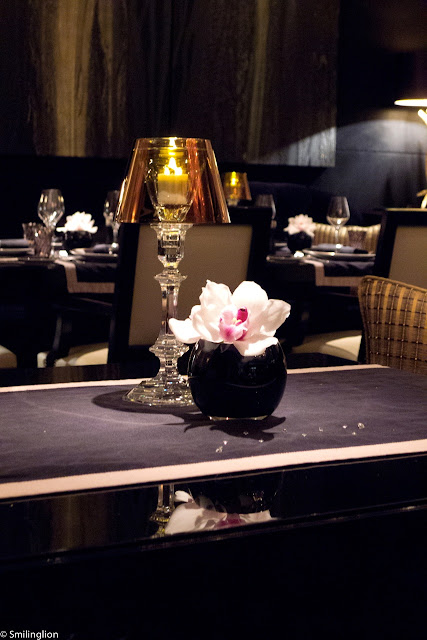 The corner booth tables with the L-shaped sofas were the most private areas and we resolved to try and reserve one of them the next time we eat there. 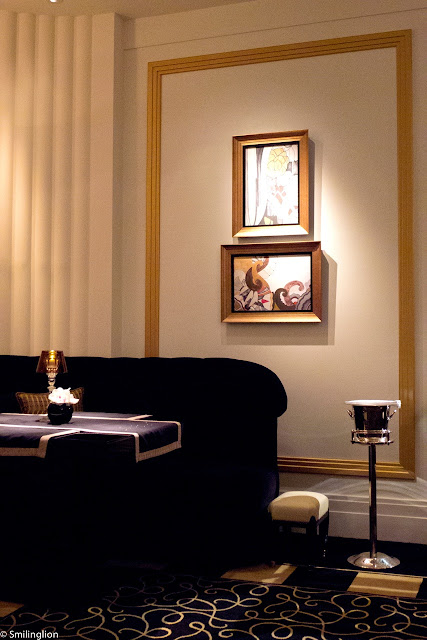 Robuchon is one of the few restaurants in Singapore to take bread very seriously. The selection of fresh breads offered at the table was simply staggering. We felt that the hard breads were a bit too tough but the soft bread and brioches were fluffy and delicious. As is always the case at a Robuchon restaurant, we ended up gorging ourselves on their breads. 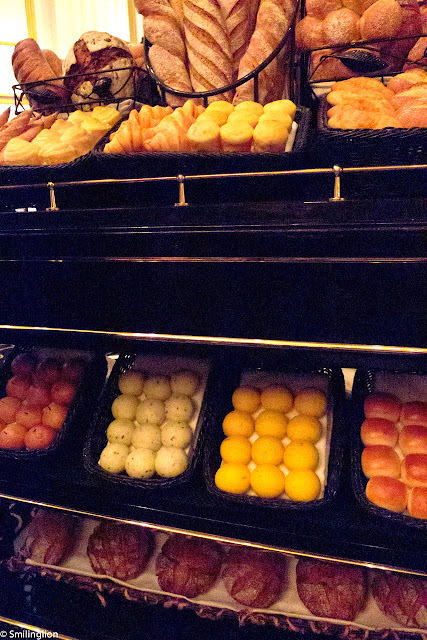 The butter we were offered was unsalted but had some salt which accompanied it. We generally prefer salted butter with our breads but the brioches which we had were so good that they didn't really need any butter.

We were served a glass each of the Bruno Paillard Brut champagne (a champagne which we have come to be very familiar with as it is served in all Robuchon restaurants, as well as the Boulud restaurants in New York and, as it turns out, Per Se as well), and we picked out a fantastic 2002 Gevrey Chambertin Premier Cru Combe aux Moines from Louis Jadot. 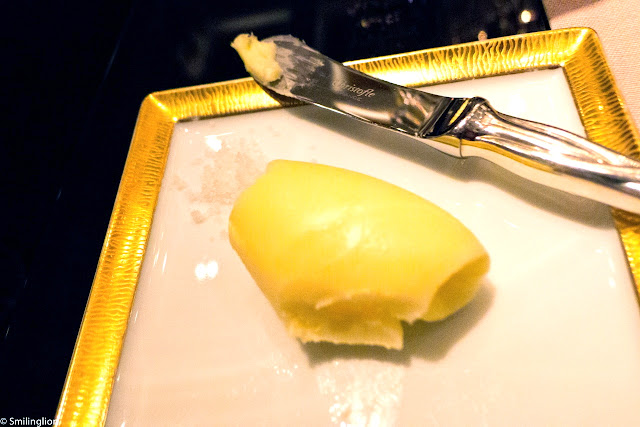 Amuse bouche of lobster jelly and caviar: It seems to be a tradition at Robuchon wherever we have eaten to start dinner with caviar. In this case, it was a bowl of lobster jelly with a generous portion of caviar at the bottom. This was a highly extravagant amuse bouche and was excellent. 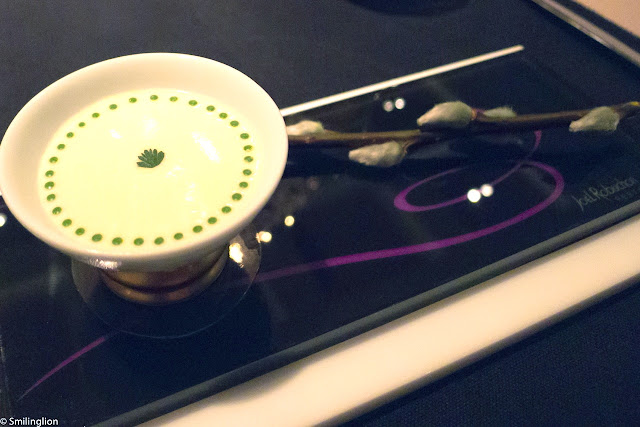 Le Foie Gras - silky symphony of foie gras with a thin gold leaf gelee: Our starter was another jelly. But this time, it was foie gras custard covered with a film of veal stock jelly topped off with gold leaves and black truffles. Knowing the price of gold nowadays, we wondered what the cost of all that gold on our plate was, but as the gold leaves were themselves tasteless, they served no other purpose than decorative. But that could not detract from the fact that this was simply a divine dish. It was served with pavé (a kind of milk brioche) which we gleefully used to mop up whatever was left of the plate of foie gras. 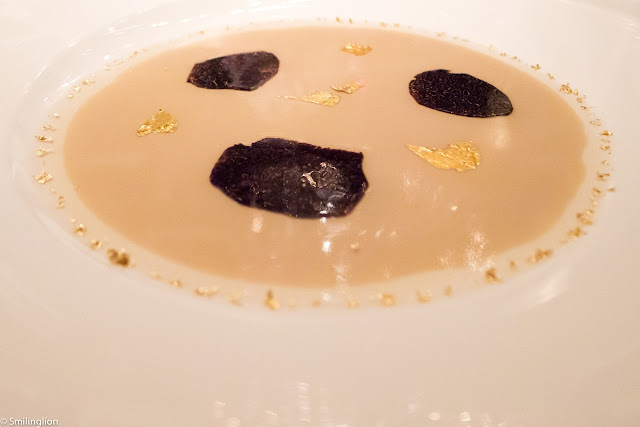 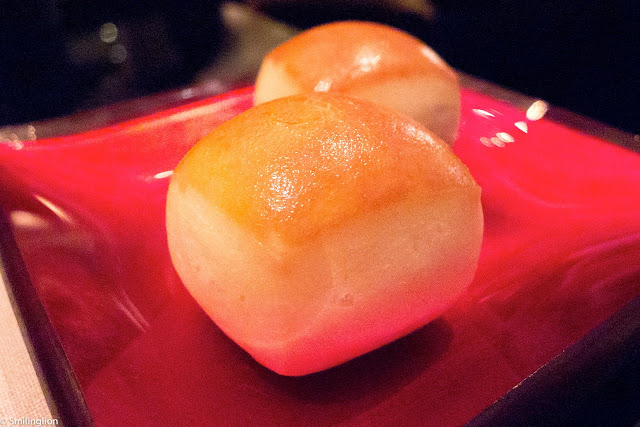 Le Champignon - mushroom simmered in a broth of veal shank: Following on from the veal jelly, veal stock was next used for the mushroom soup. This was an amazing soup, clear like a consommé under a frothy creamy surface, with champignon mushrooms which were meaty and delicious. 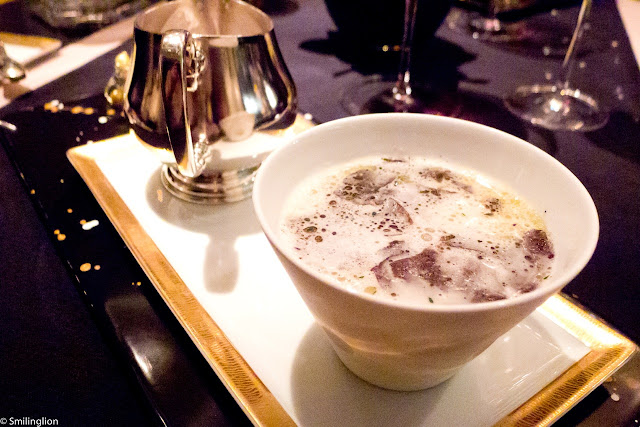 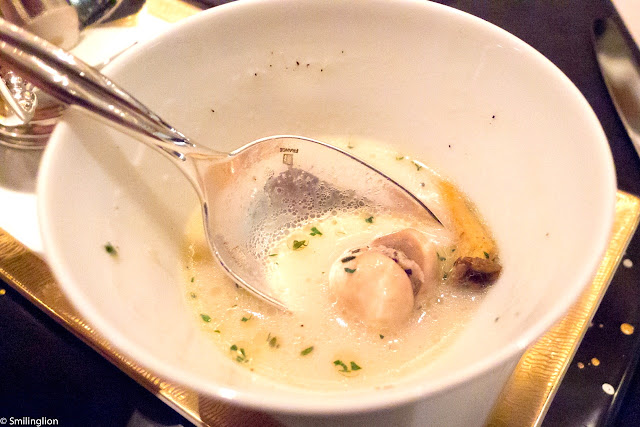 Le Boeuf - beef ribeye, wasabi spinach and a medley of bell peppers: This was a similar dish to the one we had the last time we were here. The stock and vegetables had the taste of Chinese stir fry and the wasabi spinach gave the flavour of mustard to complement the beef, but this time, we felt that the quality of the beef itself was not that great, as it was not very tender and was quite bland. 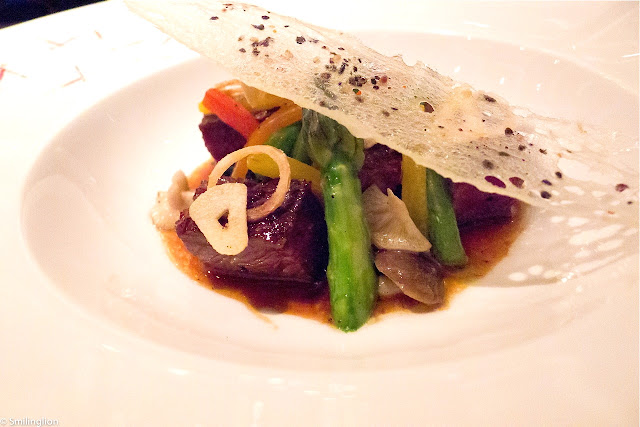 Served with the main course was a dollop of the signature mash potato which was every bit as good as we remembered it. 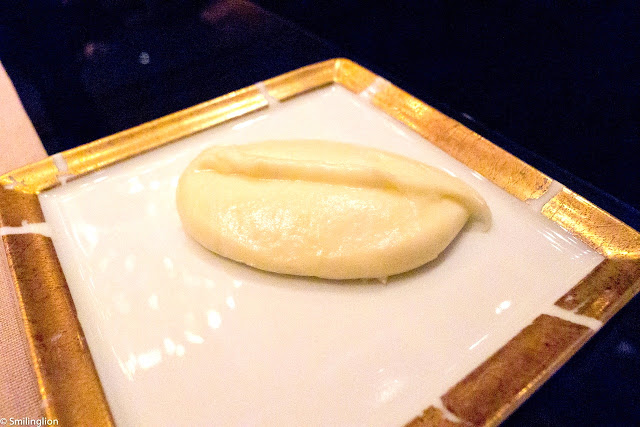 Le Porc Fermier - farmer pig caramalized with condiments and mushrooms: We found this dish much better than the Le Boeuf. The pork was cooked to perfection, being cooked through yet retaining its moisture and tenderness. There was liberal use of olives, peppercorn and mushrooms which brought out the flavour of the pork. 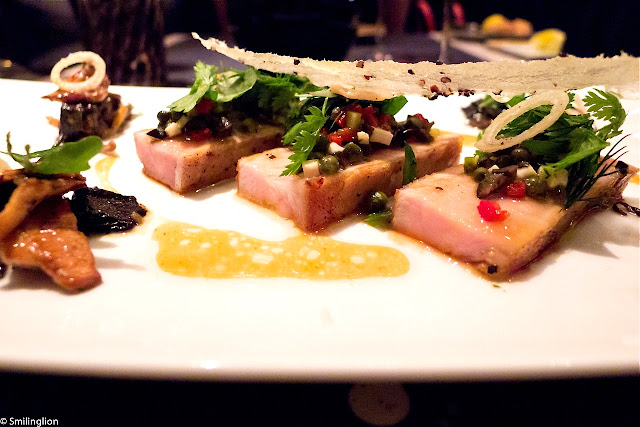 Cheese platter - goat cheese, 24 month aged mimolette, 24 month aged comte, epoisses and roquefort: The cheese this time was much better than we remembered it. The aged mimolette and comte cheeses were phenomenally good, as their aging brought out a particular sweetness and a mellowing of their otherwise savoury flavours. The epoisses was also less pungent than many others we have tasted. 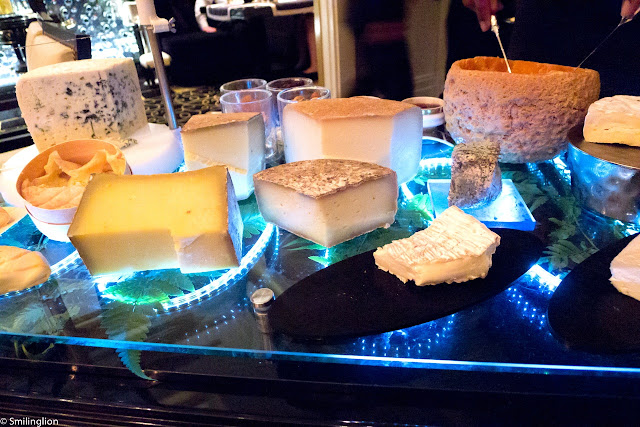 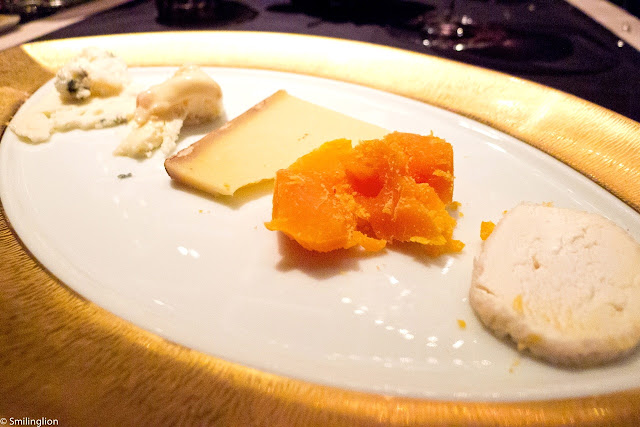 Tendance - Araguani creamy chocolaté, cocoa sorbet cookie oreo: the dinner continued at a very high standard with the desserts. The oreo cookie-inspired dessert was a combination of a ring-shaped chocolate disk covering a rich cocoa cream topped with cookie crumbs. It was very enjoyable. 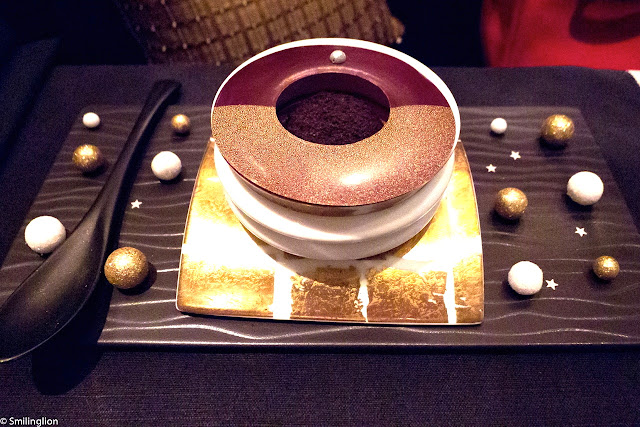 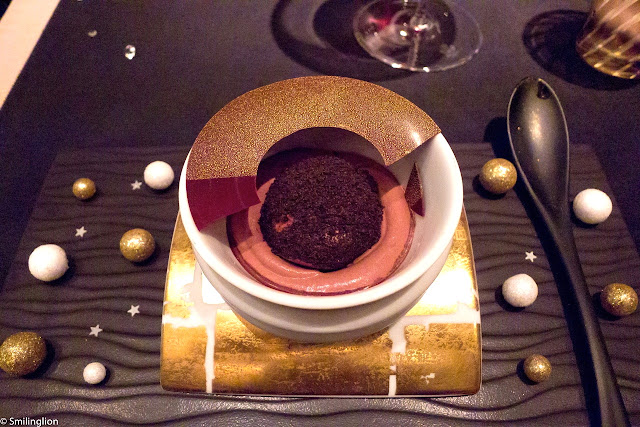 Dahlia Rouge - dome chocolate caramel on hazelnut biscuit: The red dome looked like something very sweet but when cut open, it was a soft sponge biscuit with hazelnut nougat in the middle, all this while surrounded by chocolate caramel sauce. It was very elaborate and very good. 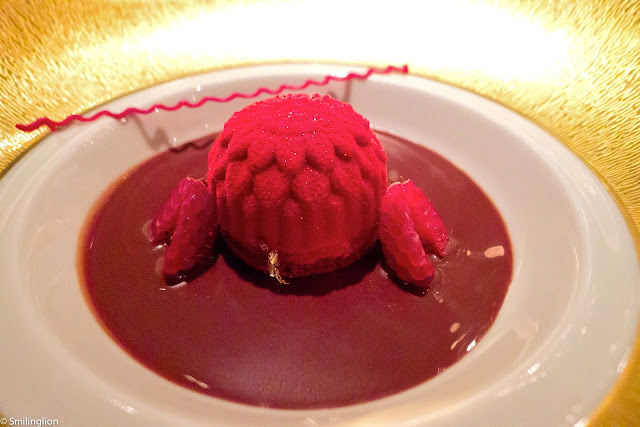 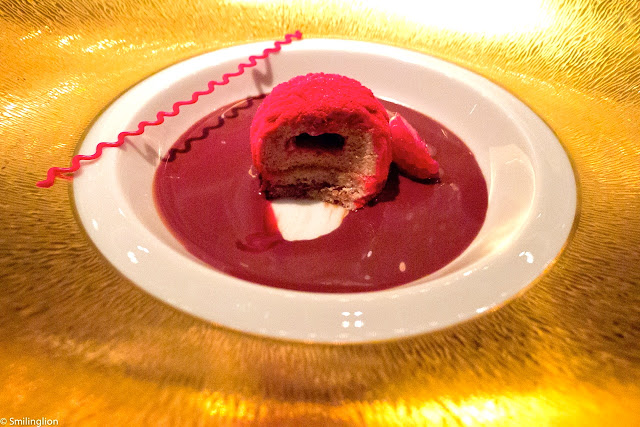 We had spied the dessert trolley near the door but somehow they didn't bring it by. Instead we were served a small tray each of mignardises to go with our coffee. Just as well that they didn't tempt us to eat even more (even though we thought that we still could). 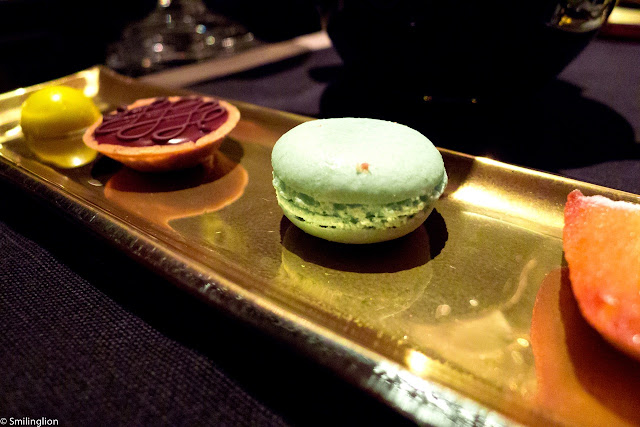 One observation we had was that Robuchon prefers to use gold-themed chinaware for almost all its dishes, and though the chinaware is very pretty, visually it takes something away from the appearance of the food itself. Generally we prefer if the food is served on clear white plates so that the chef can use them as blank canvasses to express his/her artistry by arranging the food (and also brings out the colours of the food themselves), but we noticed looking back at all our photos at Robuchon restaurants that visual appearance of the food has often been affected by the colour of the plates or the addition of inedible decorative items on the plates (e.g. the pussy willow branch with the lobster jelly and the gold and silver marbles on the oreo dessert).

Final Thoughts: Another superb dinner at Robuchon. Service was excellent and the wine list was very good. It was heartening to know that in the month that Santi is shutting down in Singapore, fine dining standards here remain just as high if not more so.
Posted by Smiling Lion