Tucked rather discreetly along an old street of shophouses in Tanjong Pagar dominated by bridal salons, Korean restaurants and KTV parlours is a relatively new French bistro opened and run by a French couple, Frederic and Charlotte Colin. The entrance is a pale green wooden door which is always closed and the first time I went there I actually walked past it without finding it, and had to backtrack after looking at the unit numbers. The restaurant was tastefully decorated in the style of a traditional french bistro, with a bar counter at the entrance and the dining room set further back into the space. Tables covered with starched white sheets were quite tightly packed (the diner behind me brushed against my back with his elbow twice that evening - that's how close he was sitting to me) but there was an energy about the restaurant, brought about by the boisterous diners (especially during dinner time). For each time that we have been here (including a weekday lunch and weekend dinners), there was always a healthy crowd of French-speaking diners, which gave us comfort that the French food here was probably quite authentic (because it certainly wasn't cheap). 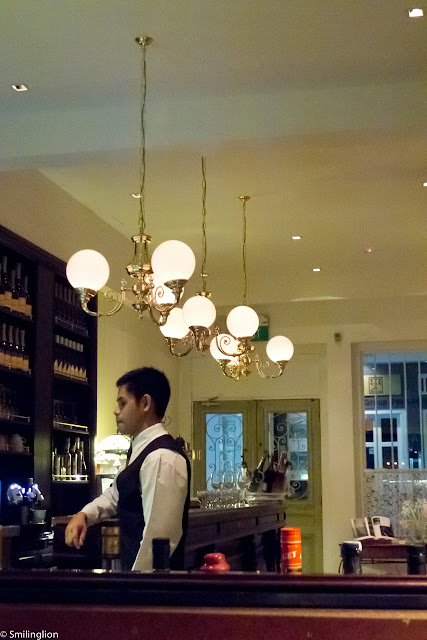 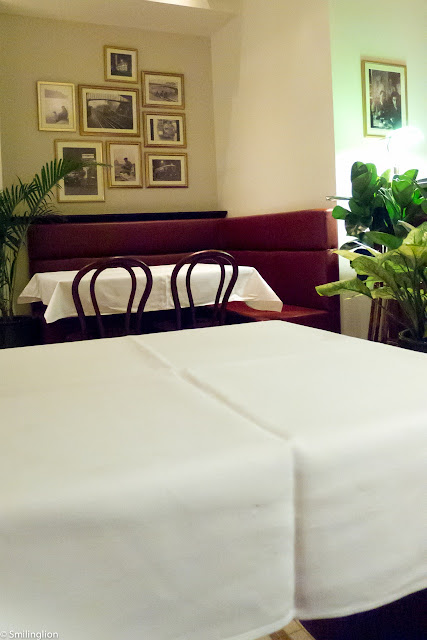 Specials were presented to us by way of a small chalkboard placed on our table. We found it quite interesting. The chef likes to serve salad with blue cheese as it was one of the specials that night and there were another 2 salads in the a la carte menu which were similar (one of which, the endive salad, I tried before and liked). 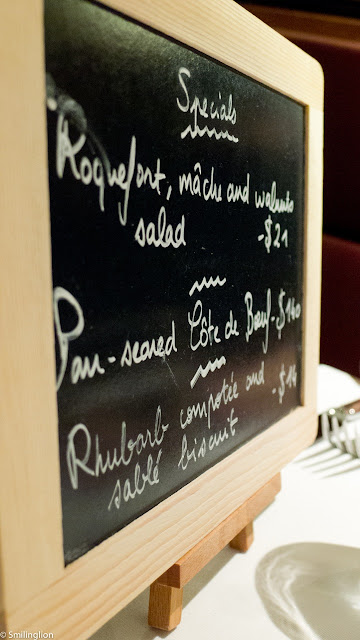 While we were considering our food options, we were served gougères which was a very nice touch and gave the place a slightly more upmarket feel as opposed to the regular bistro (our love for cheese puffs is apparent from the title of our blog). They were a bit starchy (compared to those we've been used to) but putting things into perspective, they weren't that bad. 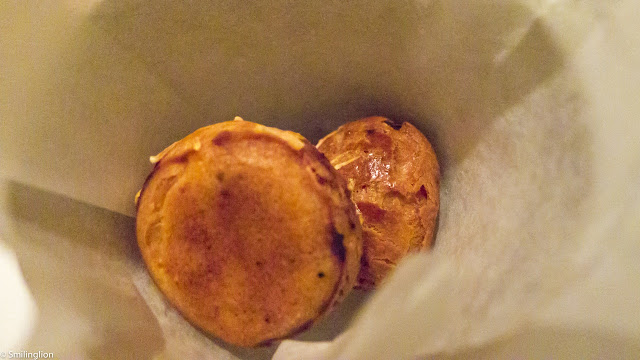 "Tsarskaya" oysters from Brittany: We started dinner with a half dozen of these rather large oysters which were fresh and briny. 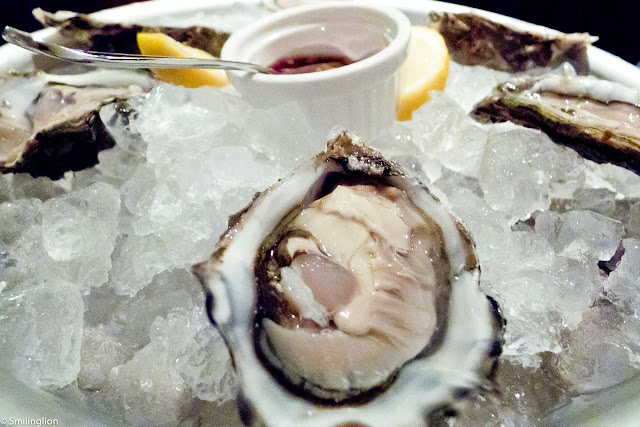 Bone marrow on Poilane bread with garlic confit: A daring choice but one which turned out to be a great one. Bone marrow can sometimes be hard to eat if not cooked properly but this one was done very nicely (it was scooped out of the bone) and served on a crispy thick slice of bread with a rich garlic spread. A very nice combination (though it left me with a killer garlic breath for the rest of the evening). One complaint was that the salad accompaniment was too damp and doused too heavily in vinaigrette (resulting in it being unbearably wet and sour). 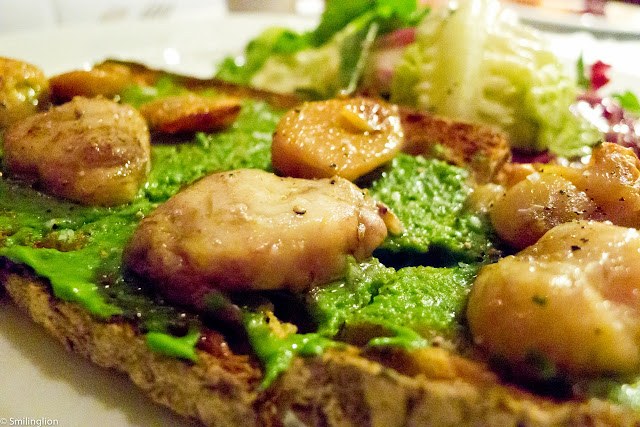 Grandpa Henri's baked pork terrine with duck liver: The duck terrine was of the right consistency and flavour. The hot toasted bread was delicious too and though there was a compote on the dish, the terrine didn't need it at all. 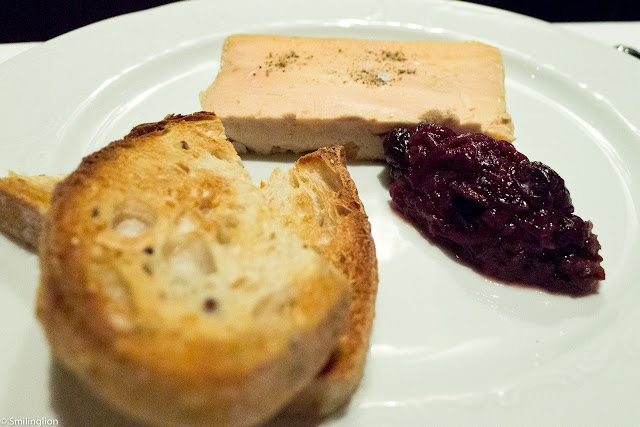 Hand-cut Angus beef with condiments and French fries: Essentially, a steak tartare, which is something I rarely find in Singapore (perhaps raw beef hasn't really caught on here). I love a good steak tartare and this was pretty good, although I felt that the beef was too rough cut and could have done with being chopped more finely. Once again the salad was too sour and was unnecessary for this dish. 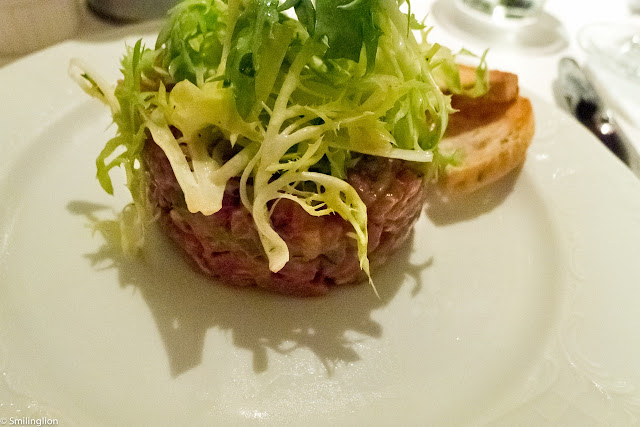 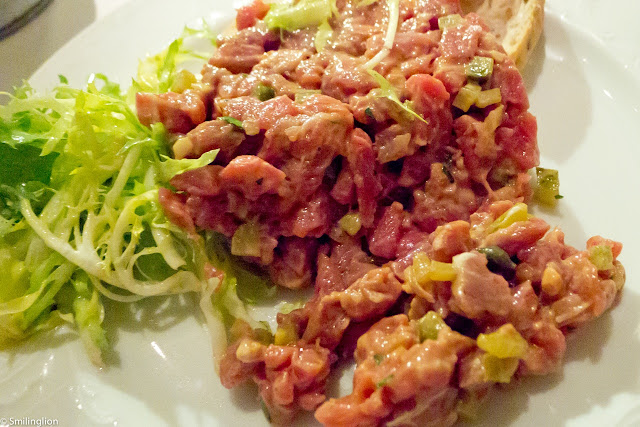 The fries accompanying the steak tartare were excellent. We've tried the fries here at other times and it has always been good here. 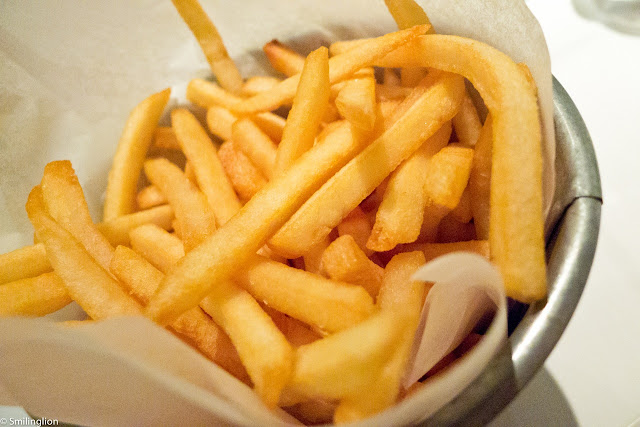 Pan-seared white tuna with Provencale ratatouille: This was supposed to be sea bream in the menu but because they ran out of the fish, it was replaced with white tuna. We are not the biggest fans of tuna done in any way other than raw (i.e. sushi/sashimi), but this was very good. 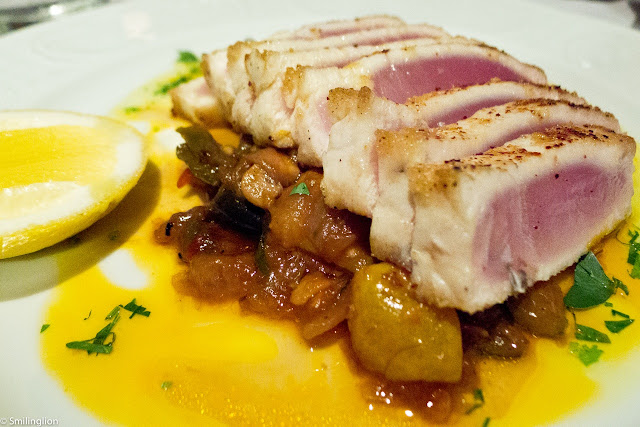 We then ordered a cheese platter which was to be followed by the dessert but somehow they ended up serving both at the same time, which was quite awkward as cheese and strawberry millefeuille don't go well together, so we'll chalk this down to a 'miss' by the service staff.

For the cheese, they were 3 classics: camembert, livarot and roquefort. What was puzzling was the reappearance of the over-vinegared salad again, which was a totally bizarre addition to a cheese course. It was as it the kitchen had a 'salad guy' (i.e. a person who's sole job was to make the salad; albeit in this case, badly) who insisted on putting his salad in almost every dish, even though it didn't really go. 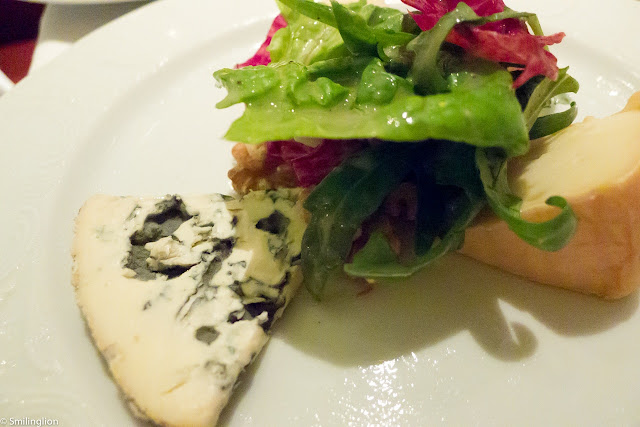 The strawberry millefeuille was excellent though. The strawberries were sweet and the cream was thick and fresh. The pastry had a nice crispy texture without being too doughy or oily. The raspberry sorbet was also very addictive. This was a high quality dessert for a bistro. 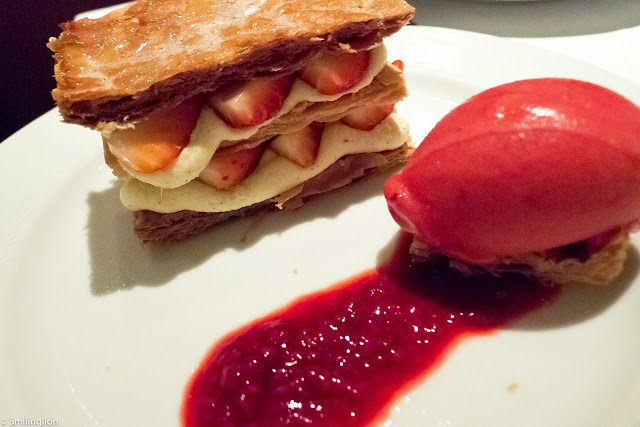 A nice touch was the madeleines. At the end of the meal, the waiter brought out a tray of freshly baked madeleines served on the molds themselves. They were perfectly made with the soft and spongy interior and slightly burnt and crispy ends. This was another example of something extra which we didn't expect from a bistro. 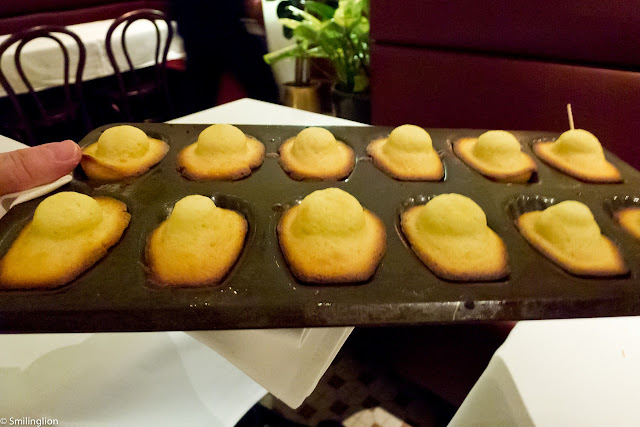 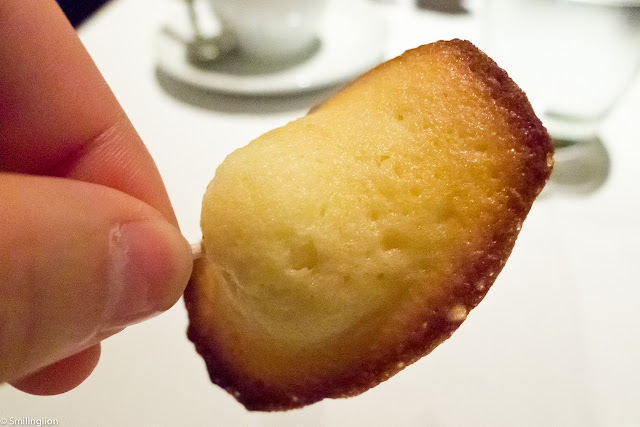 Final Thoughts: The food here was not cheap and when placed in context that this was supposed to be a bistro (from its dining concept, its decor and it's menu), it may have seemed over-priced. However, the food here has been consistently good in the times we have been here and the menu is very adventurous with some french classics which may not be for the typical Singaporean palate. We think we'll probably find better and cheaper steak frites elsewhere, but for the less common delicacies of bone marrow, quenelle (the fish foam dish we had during our last dinner here) and steak tartare, they are probably amongst the best we've had in Singapore. Service can be bistro-style (i.e. rushed and curt at times) but some thought has clearly been put in the wine list and the wines here are quite good.
Posted by Smiling Lion