After our last dinner here (see earlier review: Andre Nov 11), where we enjoyed the innovative and creative cooking of Chef Andre, we were longing to see if he can keep the standard up this time round. We were able to get a table here with just 2 weeks' prior booking (unlike last year when we had to book a month in advance). It did surprise us that the restaurant was not fully booked (it was a Friday night), and wondered if this was an issue specifically for this restaurant or for the fine dining scene in Singapore generally (after all, Joel Robuchon wasn't full either when we went there a Saturday ago). Despite the global economic slowdown of the past 6-9 months, we didn't see a slowdown in spending (especially when restaurants were still very full) last year, but perhaps the effects of the economic crisis are beginning to show now.

When we got there it was still early evening and the second floor dining room was bathed in the warmth of the sunlight of dusk. We loved the simple yet elegant set up of the interior, with its black and white themes and clean lines. 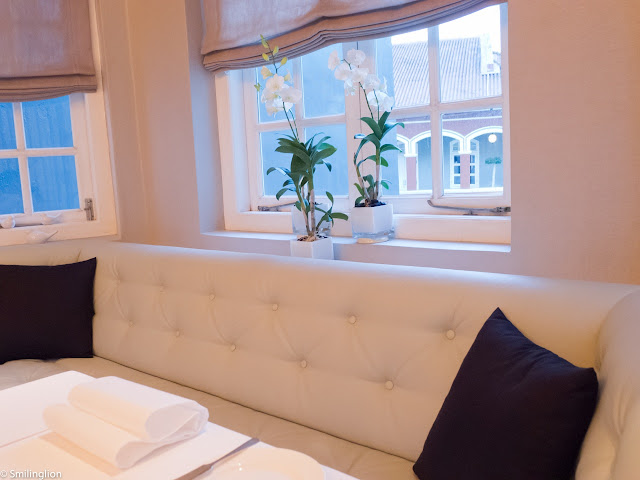 Chef Andre's 'Octo-philosophy' is set out in his sparse menu, which simply sets out the eight themes of his menu (no a la carte menu but only one tasting menu for the evening). They are: Unique, Pure, Texture, Memory, Salt, South, Artisan and Terrior (the one below in his menu is in French). We were aware that his Octo-philosophy was fixed but we hoping that his dishes would change. For wines, we were served different wines from very interesting vineyards in France throughout dinner which matched well with our food. 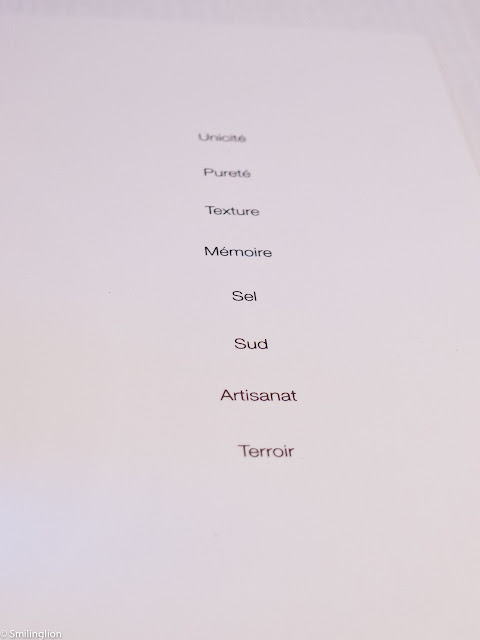 On that note, we were slightly surprised when our amuse bouche this time was almost exactly the same as the one we had the last time (except the shape of the dried mushroom which was flattened this time). Again there were the mini baked potato and fish and chips on 'soil' (i.e. biscuit crumbs and nuts), crispy chicken skin, popcorn and salmon tartare wrapped in paper. 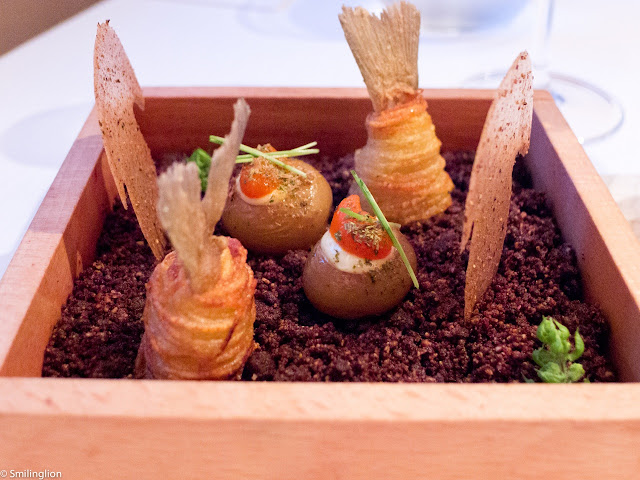 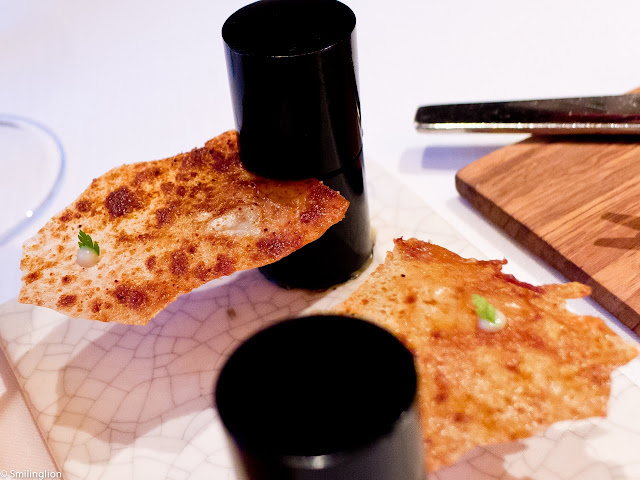 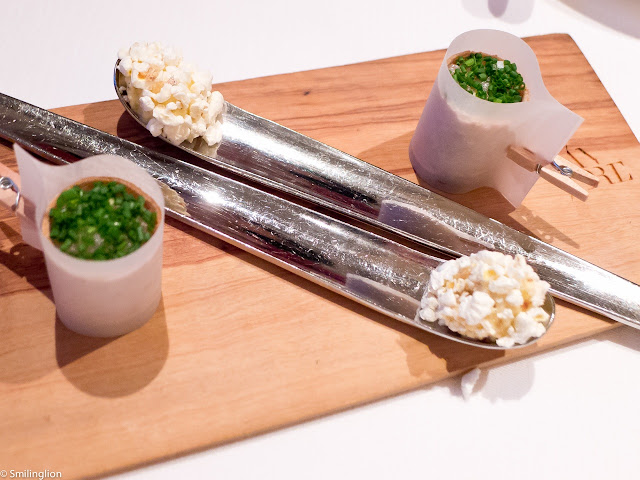 Pure: raw shrimp, clams, zucchini, caviar prepared with no seasoning. This was an excellent mix of seafood and vegetables and an appropriate combination of flavours. It was light and refreshing yet had a complexity of tastes from the diverse ingredients. 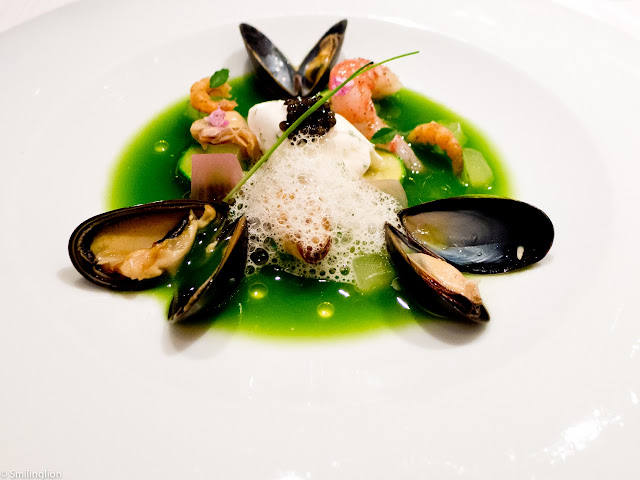 Salt: seaweed and raw oyster with granny smith apple foam and surrounded by mini apple and cucumber cubes. The oyster was fresh and the foam pleasant, but this was one dish which looked better than it tasted. We felt that the apple didn't really match well with the oyster and the rather chewy texture of the seaweed adversely dominated the dish. 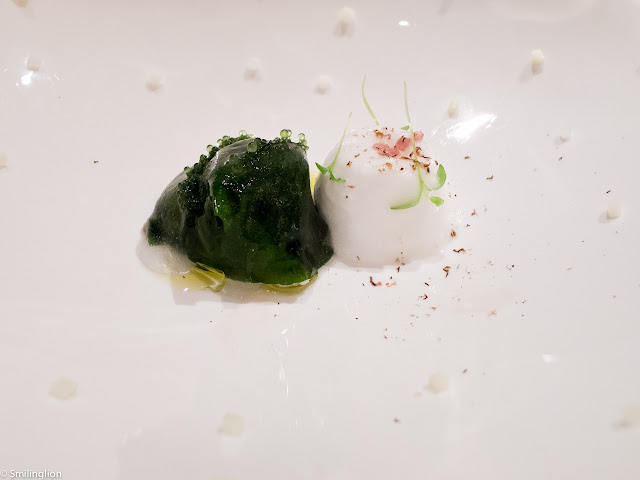 Artisan: aubergine with duck tongue, and salsify chips with macadamia powder on a bed of mash aubergine, served with black sesame powder. This was almost exactly the same dish that we had the last time. But we felt that this time it tasted better. The duck tongue was well marinated and its taste and texture complimented the earthy flavours of the aubergine. 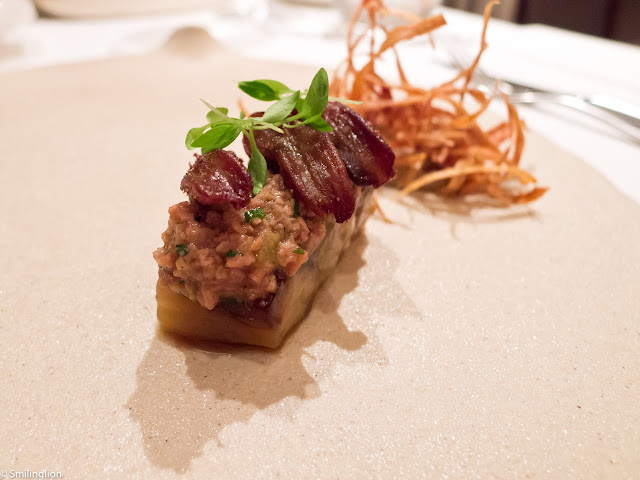 South: two plates, one with raw flounder sashimi-style with white peach and tomato, and the other with seared amberjack and raw shrimp on a bed of rice. Again this was a repeat of our previous meal with some small changes. This was very good as was the last time. 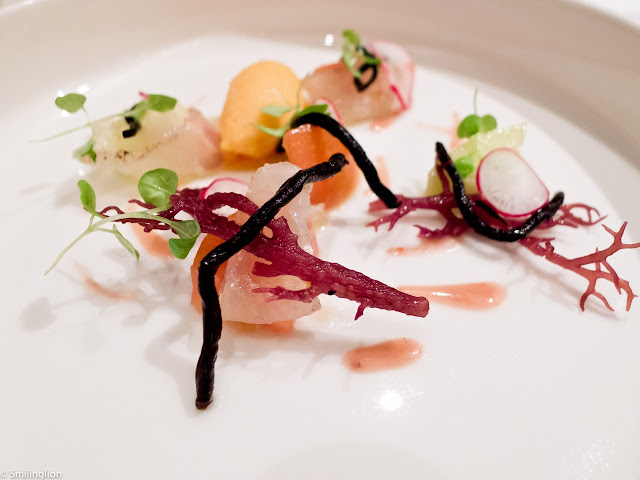 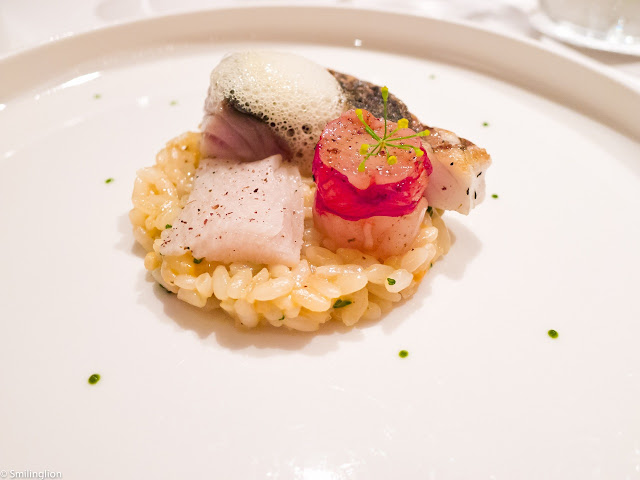 Texture: potato, petit pois and grilled squid. This was identical to our previous meal, except that we we recall it, this time the squid was slightly charred giving it a nice burnt flavour, and the chili flakes were not as prominent. Still very enjoyable. 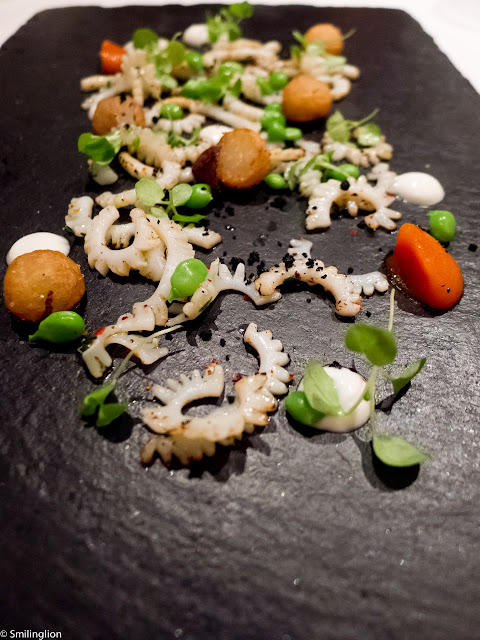 Unique: grilled barracuda, artichokes and apple with oyster leaf. A fourth main course in a row which was identical (except for the oyster leaf). The leaf was fun and the fish well cooked. This was a well executed course. 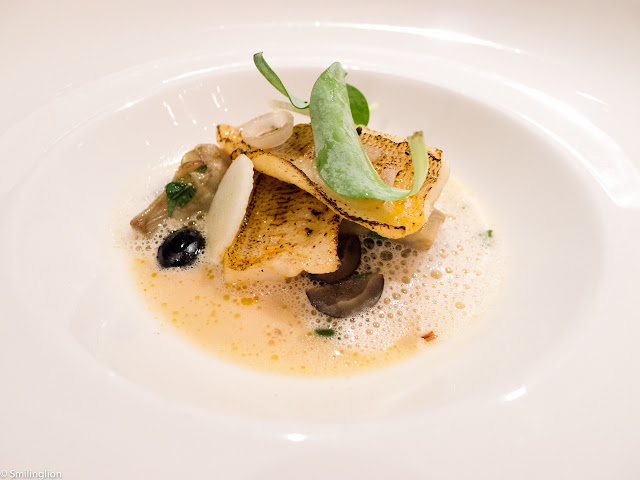 Memory: foie gras with black truffle reduction. An Andre classic which still tasted marvelous. Another repeat from previous courses but one certainly worth having again. 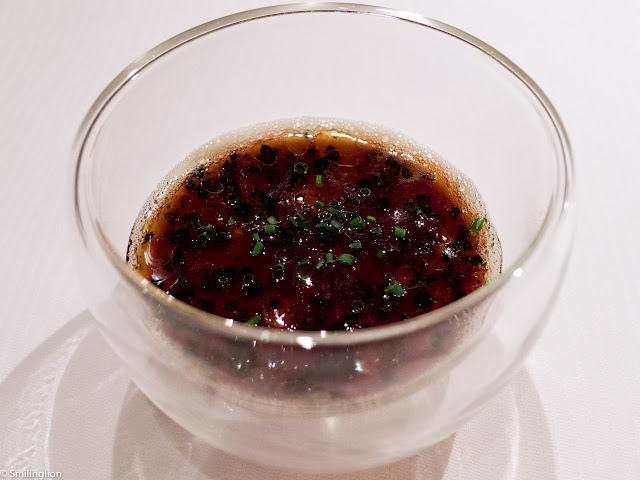 Terrior: Lapin (French for rabbit) with petit pois and mustard seeds. It was getting slightly disconcerting that this was also a repeat of our previous meal (and that more than half of what we'd had this time was a repeat (albeit with minor deviations) of our last meal here almost 4 months ago. This was as good as we had remembered it, and the mustard seeds were in particular a very clever touch, as it gave a crunchy and nutty flavour to the rabbit. 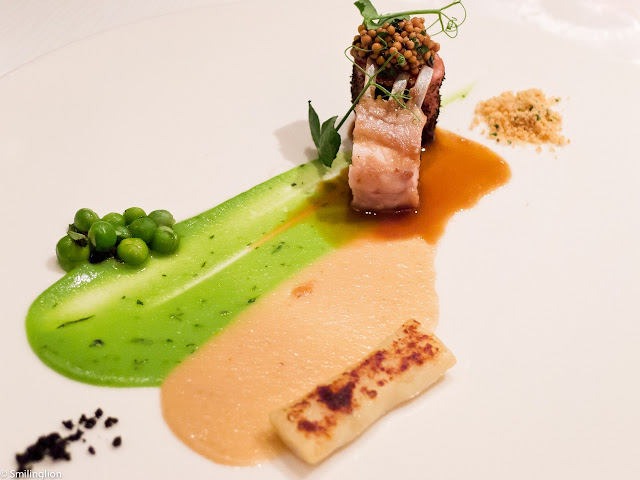 Cheese course (which was shared between us) was light with 2 soft cheeses (one cow and one goat) with a small wedge of mimolette. We thought that they could have given us more. 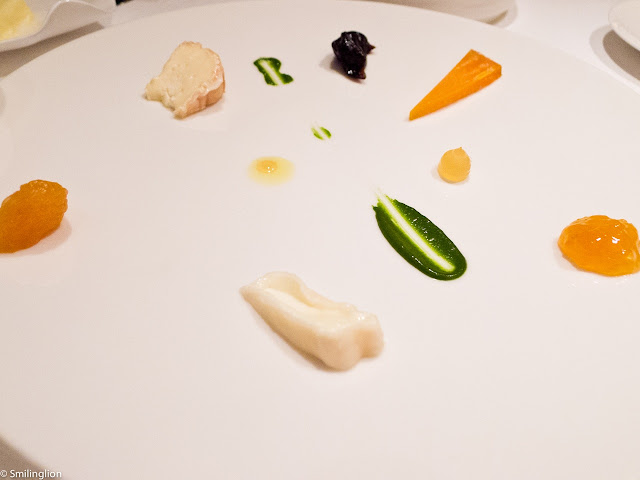 The cheese course came with an interesting bread bowl which had 2 types of crispy breads on a bed of crushed peanuts (which we ate a lot of). 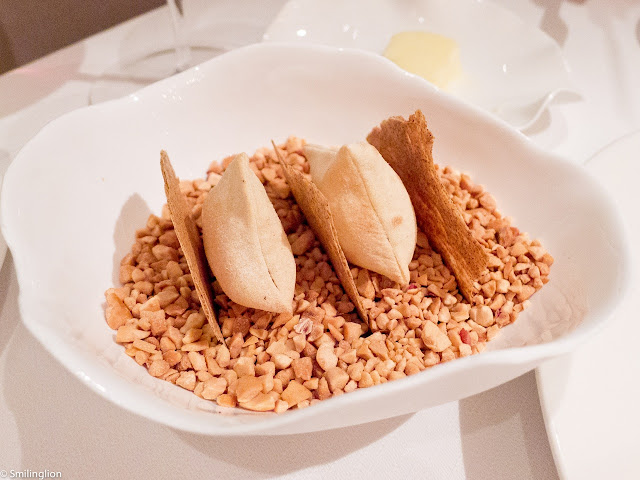 Pre-dessert was the strawberry yoghurt granita, which merely served as a palate cleanser and was once again the same as what we'd had the last time. 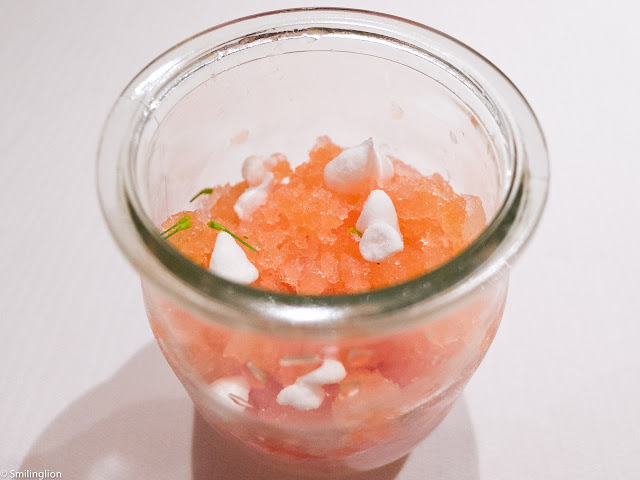 Fortunately, dessert was this time different. It was a collection of ice cream and crushed nuts with a moist caramel bread and a chocolate dome which, when put into the mouth, would break and release molten chocolate (reminiscent of the filling of a chocolate fondant). This was very good. 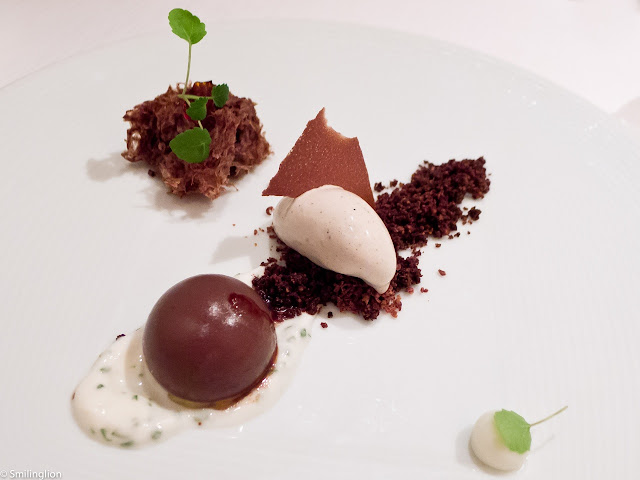 Mignardises included madeleines, marshmallows, jellies and popcorn, which were a nice way to round off the meal. 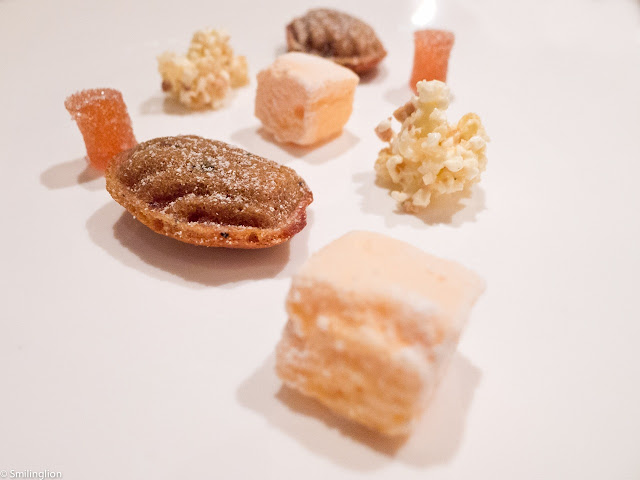 Final Thoughts: We thought the food this time was better than during our last visit. Service was certainly much better and we had a lot of very friendly attention from the staff, who were knowledgeable about the food and wines. Each course was promptly served and there was a good flow about the dinner that night. However, aside from the dining experience, we were disappointed that four months after last coming here for dinner, we were to be served almost the same food as last time. This is a similar issue we have with Gunther's, which also rarely changes their menu, but at least at Gunther's they have an a la carte menu and daily specials which give the diners a choice. There's nothing wrong with having a few classic dishes which appear always in the menu, but in this case there were just far too many repeats. Maybe that's the reason why the diners that night were mostly first-timers or tourists; local regulars like ourselves will be less keen to make repeat visits if we know that the menu is not going to change. We resolved that next time when we make reservations, we will also state what we had the last time so that Chef Andre will have the chance to prepare something different for us.
Posted by Smiling Lion