Having grown up continuously hearing and reading of rave reviews about Thomas Keller and French Laundry (and having used the French Laundry cookbook as one of my favourites), it has always been a dream of mine to somehow have the chance to dine there. However, given that I have never had cause to fly halfway across the world to the US West Coast, this was one which remains unfulfilled. Hence, it was with quite some excitement that we managed to secure a reservation at Chef Keller's newer (and arguably more in-vogue) restaurant in New York, the 3 Michelin star Per Se.

The restaurant was booked solid for an entire month from the time we had finalized our trip to New York, but fortunately, our concierge at our hotel, the Mark, was able to get us a table, albeit one at 5.30pm. In preparation for what we had heard was going to be a very large meal, we skipped lunch that day to save space for the early dinner. 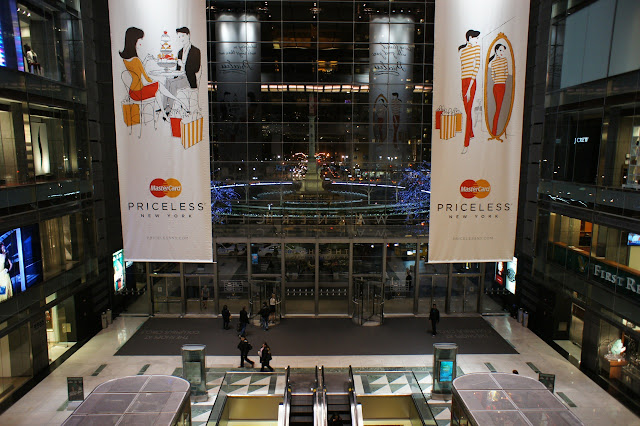 Per Se is located in the Time Warner Centre at Columbus Circle on the top floor of the atrium. We thought we had arrived there early as we tried to open the blue wooden door and found it locked. It was only 10 minutes later when another group of diners arrived and walked through the sliding glass doors on the side of the blue wooden door that we started to feel slightly foolish! Fortunately, during the time we were standing outside, we saw Chef Keller arrive (looking quite grumpy, I have to say) with his flustered assistant in tow and enter his restaurant through the back kitchen door. It was an exciting moment for us not because we were thrilled to see him per se (pun intended), but because he was going to be in the kitchen hence our expectations for the food that night were raised. 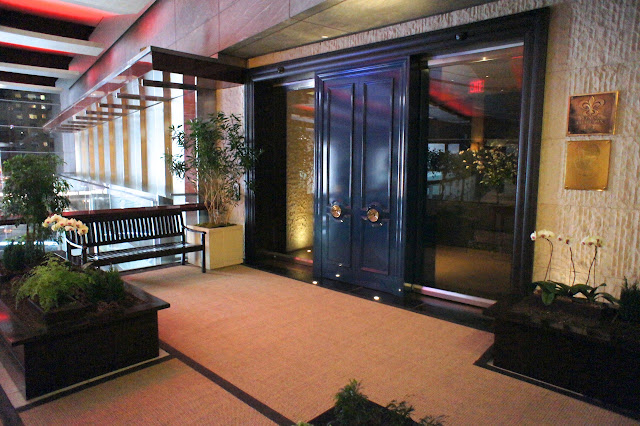 The dining room was smaller than we had expected, and consisted of a row of tables by the windows (giving guests a gorgeous view of New York's skyline, Columbus Circle and Central Park) and more tables on a raised platform nearer the kitchen. The centerpiece of the dining room was a cozy fireplace which gave the room a warm and homely feel despite its otherwise swanky interior. We had been given a table away from the windows, which though didn't have any views, but felt more private (the tables by the windows were alongside the corridor and hence had to bear waiters and guests walking by quite frequently). 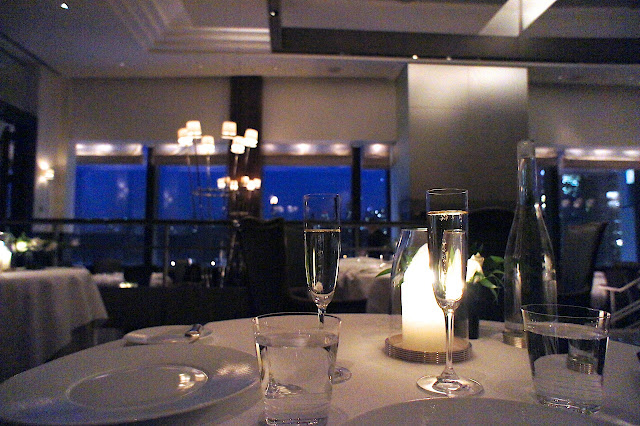 While we were going through the menu and wine list, we were served some canapés; namely gougeres and the salmon tartare cornets (which were straight out of the French Laundry cookbook, I remembered). 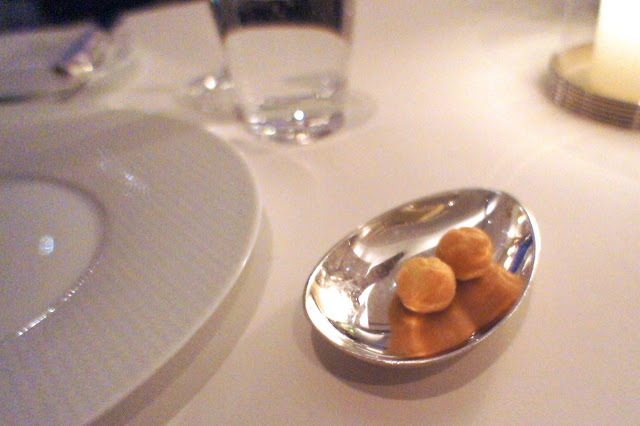 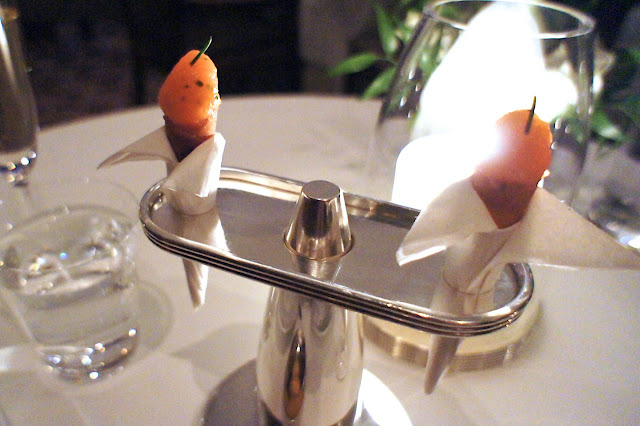 Despite a winelist dominated by big french names and numerous American ones as well, I found at a reasonable value a familiar wine, the Paolo Scarvino Bric Del Fiasc. Moreover, it was a very good year of 1996 (which we also feel is better value than the 1997 which tends to be overpriced). True to form, it was a very big wine despite its age and got better as the dinner went on. 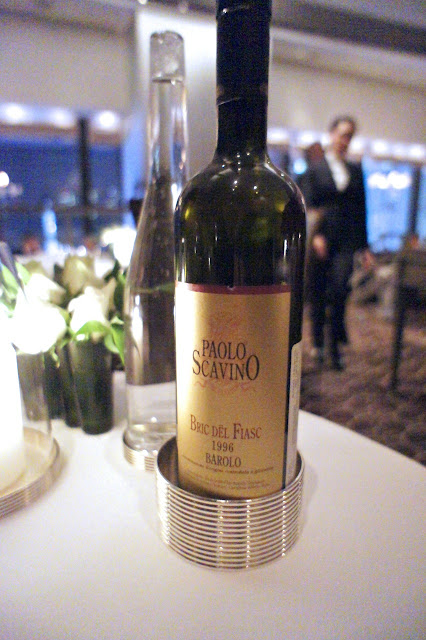 The one thing which struck us very early on in this restaurant was the level of service. Generally we think the service levels at New York's top restaurants are very high, but Per Se's was just that much better than anywhere else. In addition to being knowledgeable about the food and the wines, the waiters were genuinely sincere and attentive, made the appropriate amount of small talk without being bothersome and served the food and cleared the tables with such little fuss and no little skill in such way that did not interrupt our conversations and dining experience. They would also constantly refresh our bread to ensure that we had warm and fresh bread at all times, which were divine, especially with their butter. 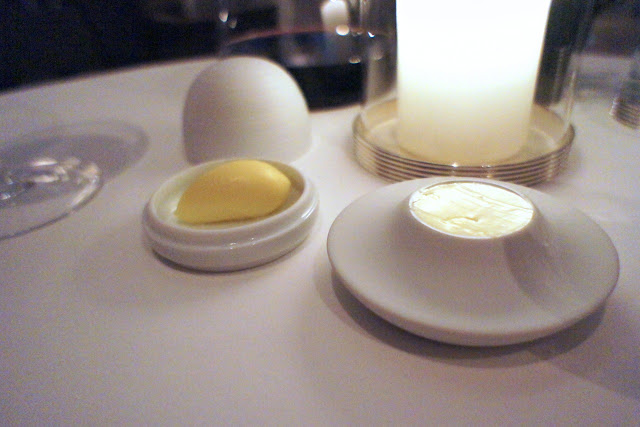 We were only given one tasting menu for dinner that night, which included a few choices and supplements. I don't think we saw or were given an a la carte menu. Not that it was any inconvenience as we had intended to have a big meal in any case.

"Oysters and Pearls" - "Sabayon" of Pearl Tapioca with Island Creek Oysters and Sterling White Sturgeon Caviar: This was simply superb and an excellent start to the meal. 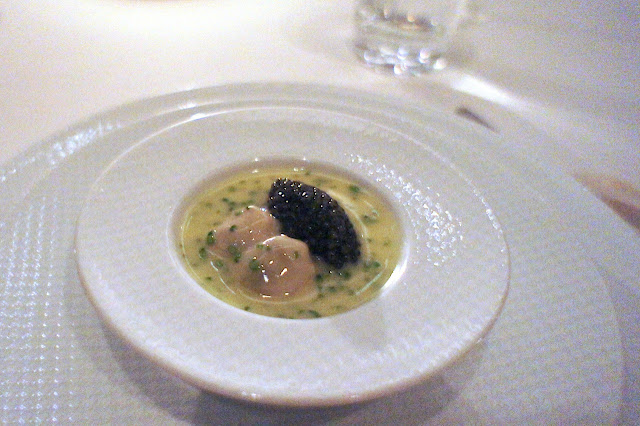 "Terrine" of Hudson Valley Moulard Duck Foie Gras - Navel Orange, Endive Marmalade, Black Walnut Puree and Red Ribbon Sorrel: This looked like a classic au torchon from French Laundry and tasted as good as I would have imagined it. It was accompanied by 6 different types of salt for flavour, and a buttery and sinful brioche. We paired this with a glass each of Sauternes. 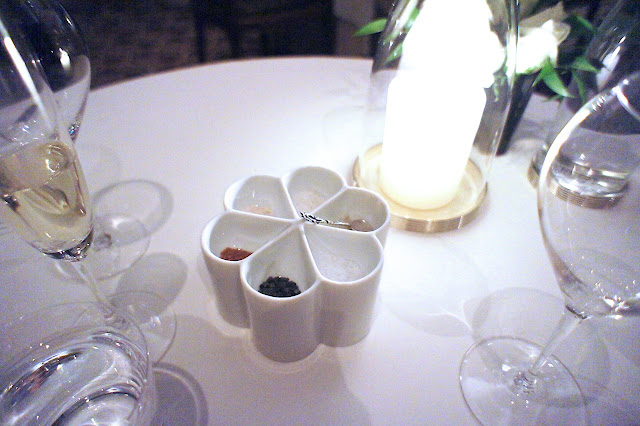 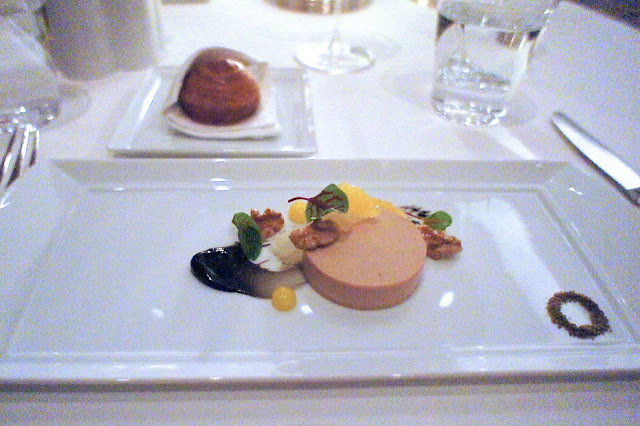 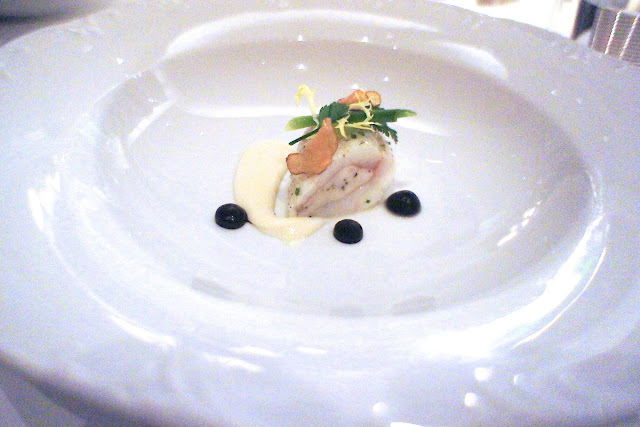 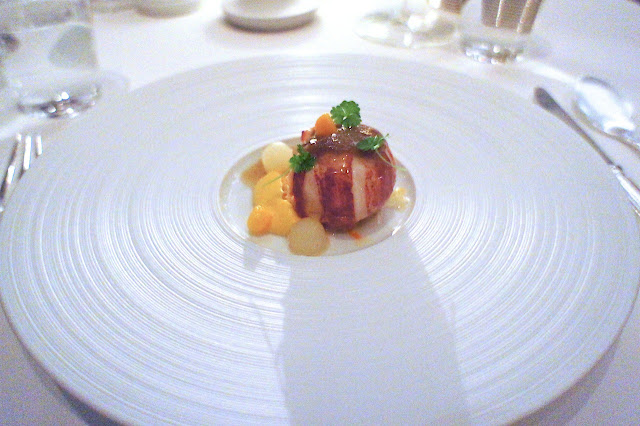 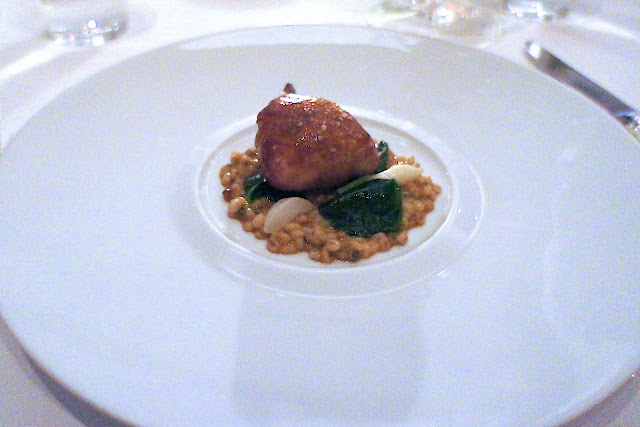 Rib-Eye of Elysian Fields Farm's Lamb - Per Se "Falafel", Romaine Lettuce Puree, Pickled Heirloom Carrots and Cilantro Shoots: Another gorgeous piece of red meat which was as good as it could be. 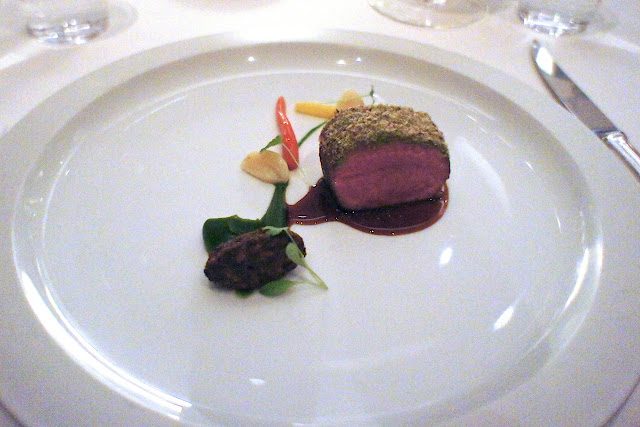 "St Haonnois" - Medjool Dates, Pistachio, Cauliflower "Florettes" and Golden Pea Tendrils: A rather simple piece of cheese with some fruits and nuts on it. 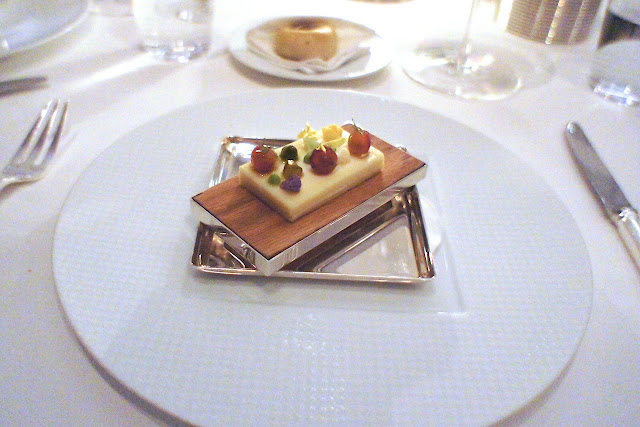 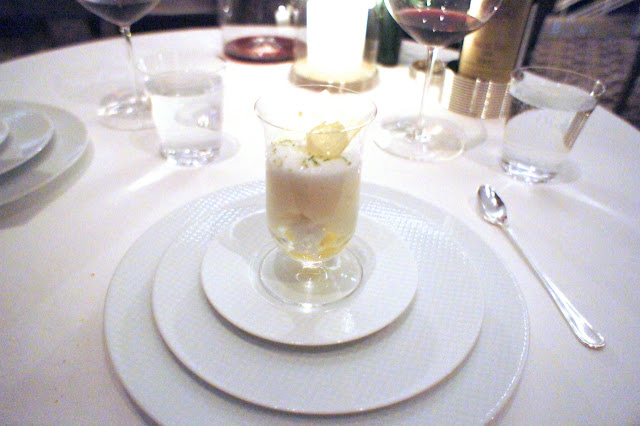 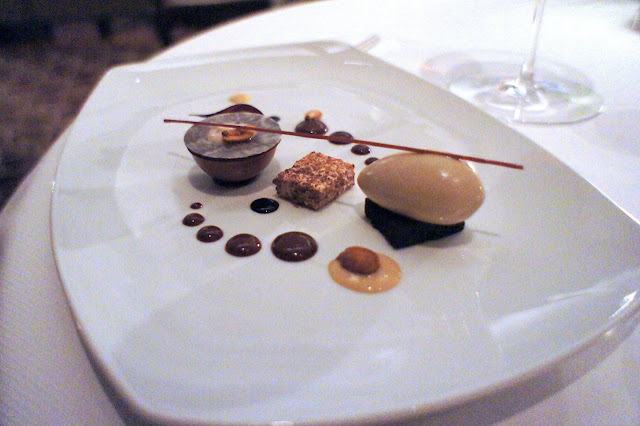 "Champagne Apples" - New York State Apples, "Sable Breton" Champagne "Parfait" and Bay Leaf Juniper Ice Cream: This was my pick. I felt that the apples were slightly sour and this overpowered the rest of the dessert. Should have gone with the chocolate peanuts dessert my wife had. 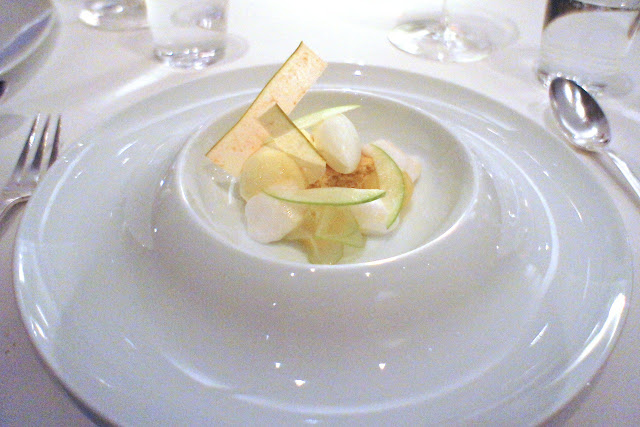 Just when we thought that we couldn't possibly eat any more, a box of chocolates was brought out for us to pick the ones of our choice, and then it was followed by a large bowl of chocolate truffles and a multi-tiered tiffin box of macaroons. And despite our best efforts, we couldn't even put a dent into it. 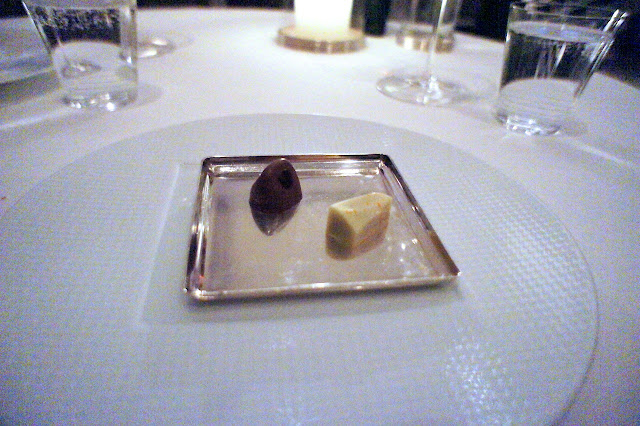 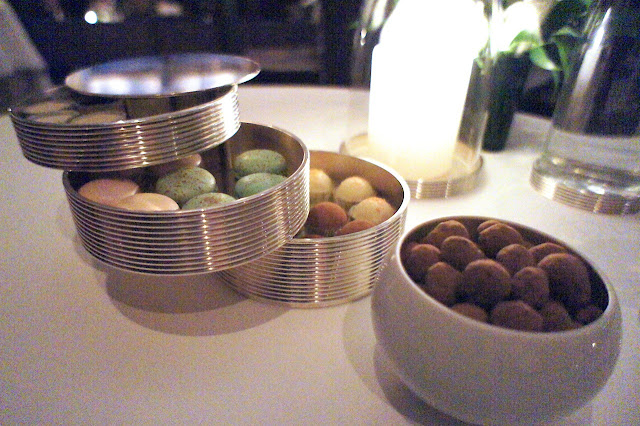 And to round it off, we were served French Laundry's famous 'Coffee and Donuts' which was a fitting end to a fantastic meal. There was a good pace to the dinner, and despite the knowledge that there was going to be another seating probably at 9 or 9.30pm that night, we didn't feel at all rushed even though there were many courses. We finished our meal comfortably and was about to leave at 8.30pm (and headed off to Dizzy's Club next door for some live jazz). 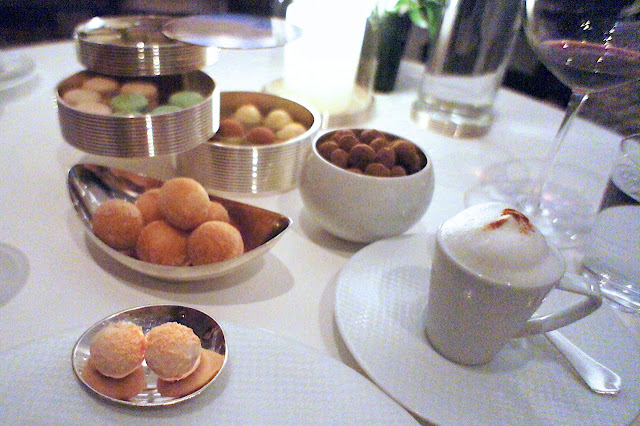 Final Thoughts: Despite being wary of its hype, we were nonetheless pleasantly surprised and highly impressed by the quality of our dining experience, from the interior to the service, to the wines and of course with the food. Though it may have been the most expensive meal for us in New York on this time round, it was still very much worth the trip. Every course was perfectly executed and was well thought through, and this was complemented by the superlative service we received that night (though it is interesting to note that this was the only restaurant on our visit to this city which automatically included a 20% service charge into the bill; but because the service was so good, we left an additional tip). This was probably our best meal in New York ever (only very slightly shading Eleven Madison Park).
Posted by Smiling Lion