Update: Chefs Lawrence and Gary have both left Hinoki.

Nestled rather anonymously at the fringes of Singapore's financial district (i.e. at the far end of China Square just across the road from Hong Lim Complex), Hinoki is a year-old Japanese restaurant opened by Singaporean chef Lawrence Chia and his sidekick Gary Ng (both formerly of Kome in Keppel Club). Hinoki did not have the most auspicious of openings; shortly after it did so, the Japan Tsunami hit and understandably many diners (ourselves included) shunned Japanese food for a while after that. It was only towards the end of last year that we finally started eating Japanese raw fish again, and Hinoki has quickly become our favourite place in Singapore for omakase. 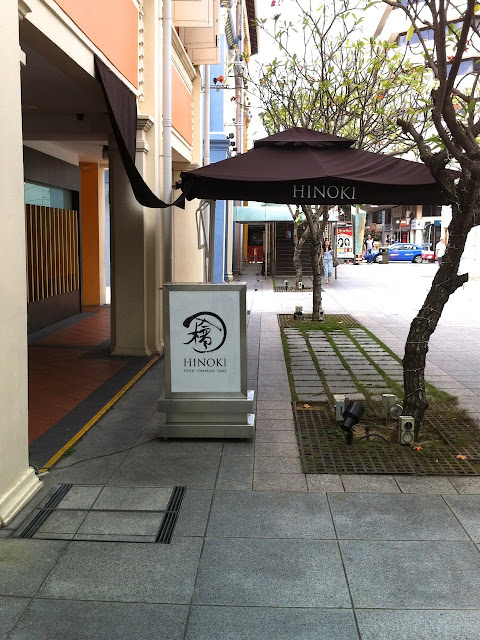 Lawrence has always been the most earnest of chefs (we have been patronising him since his Kome days), and he has, in our view, always managed to maintain a high standard at decent prices. His strength has always been in sushi making, but he has had to also serve typical main street bento and set meals in order to maintain a flow of business in his restaurant. The way to get the best of Hinoki is to book a seat at his sushi counter and let the chef decide what to serve to you within your pre-set budget. For that you'd get some starters, sashimi, some cooked food and of course, sushi (and dessert too).

We went for lunch this time and for starters, we had the very refined tara shirako (the sperm sac of wild cod - yes it sounds disgusting but had the taste and texture similar to that of tofu, albeit a bit more savoury), and a side of edamame with truffle oil and sesame seeds. 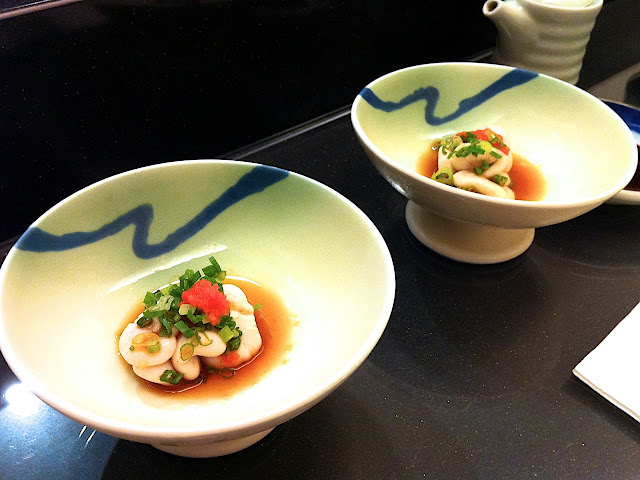 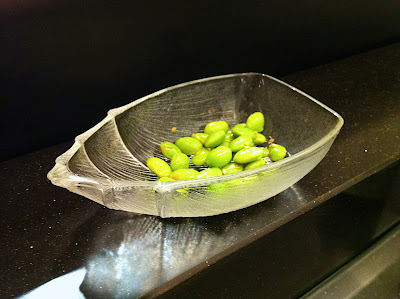 Lawrence does aburi (seared) raw fish very well and the next course was a large seared hotate (scallop) topped off with seared foie gras, which was very decadent and excellent. 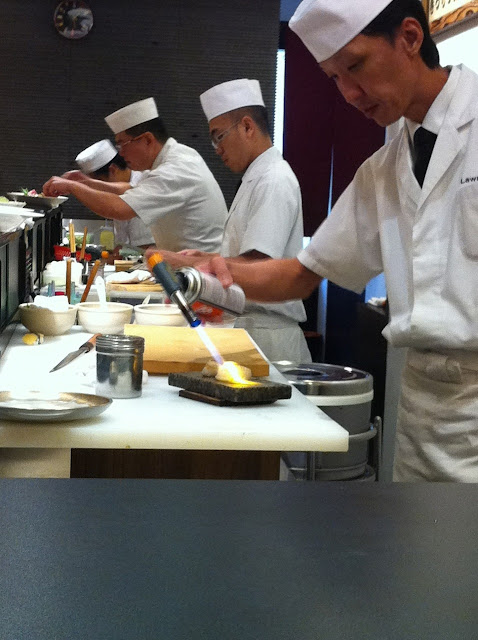 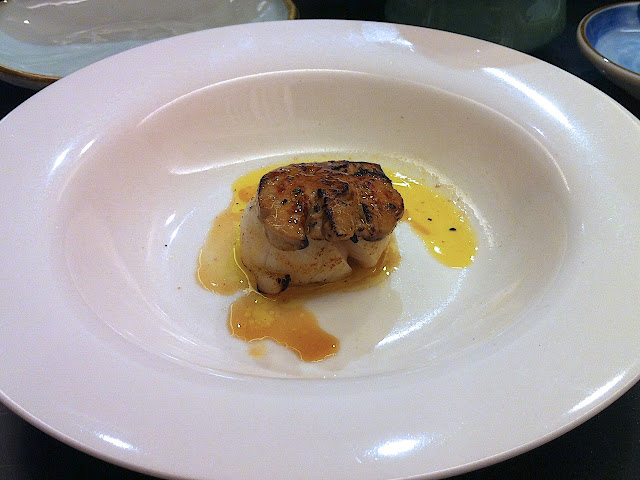 A sashimi platter was next, accompanied by strips of dried fish and a dollop of mayo. The sashimi was very fresh and well cut. Hinoki uses freshly grated wasabi and not the green mustard which many main street Japanese restaurants use in replacement thereof. 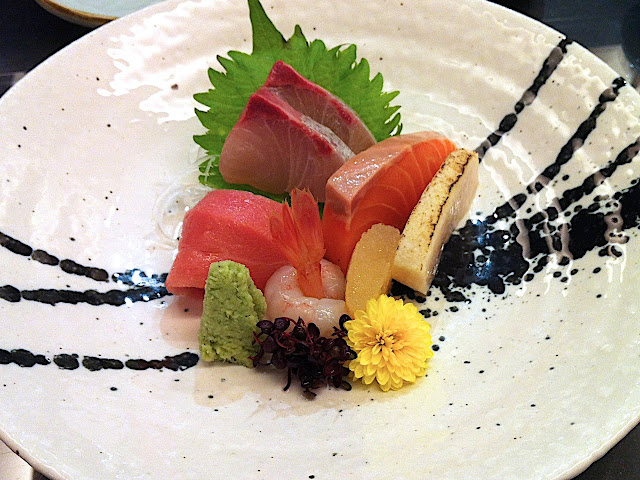 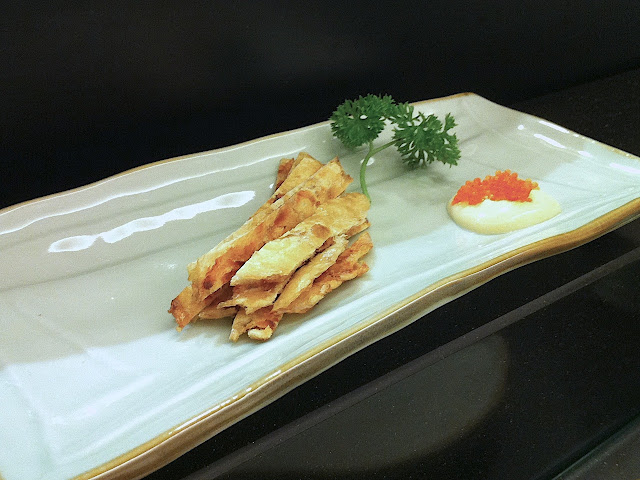 The tempura was the very unusual baby fugu (puffer fish). The fish was very fresh and tasted a bit like cod. The batter was also light and fluffy and not very oily. 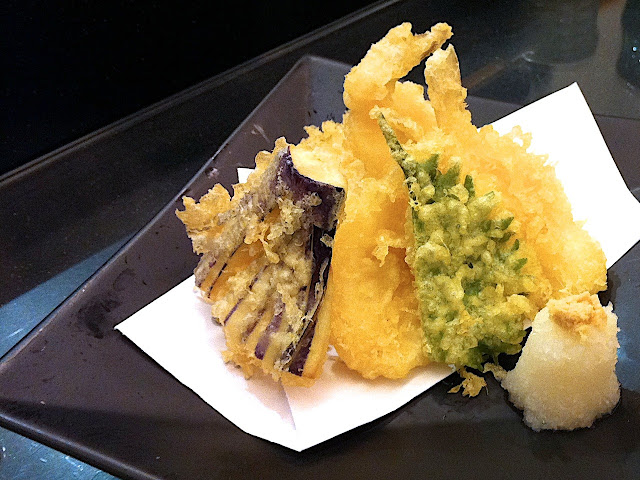 Simultaneously with the main courses, we were served our sushi piece by piece. The first was the uni, which was very fresh. The sushi was accompanied by some dried figs as a palate cleanser. 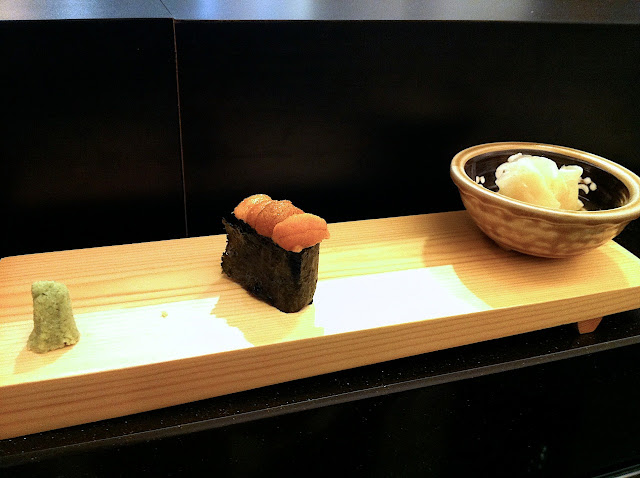 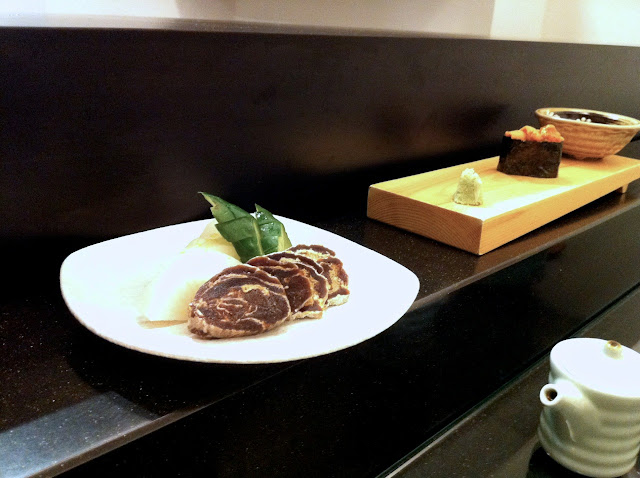 The grilled yellowtail was a very large piece (to be shared by 2), and it was cooked and seasoned to perfection. 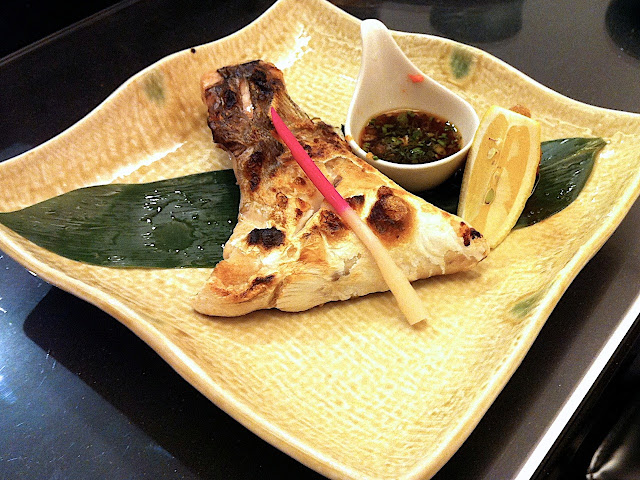 The next few pieces of sushi were the anago (seawater eel), aji (horse mackerel), hirame (flounder), seared sake (salmon) belly and hamachi (yellowtail), all of which were masterfully prepared with each grain of rice in particular at a standard you'd expect to find in a proper sushi restaurant in Tokyo. 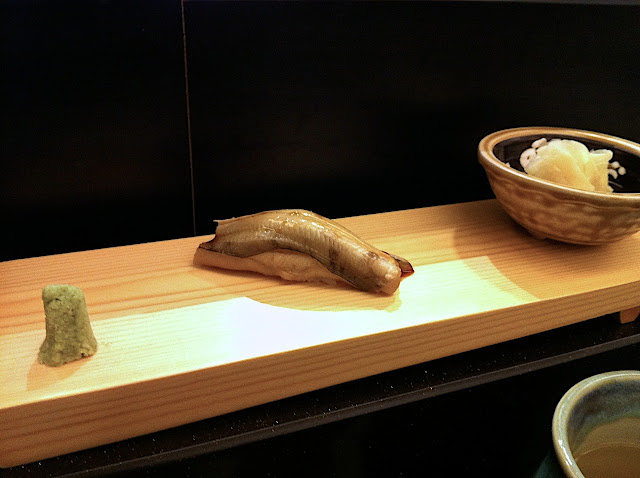 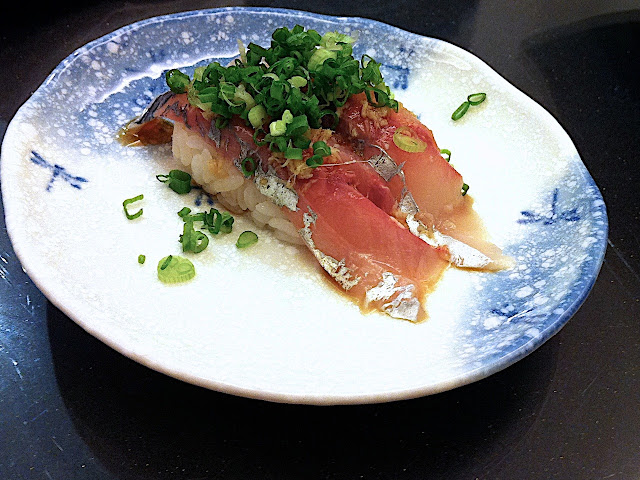 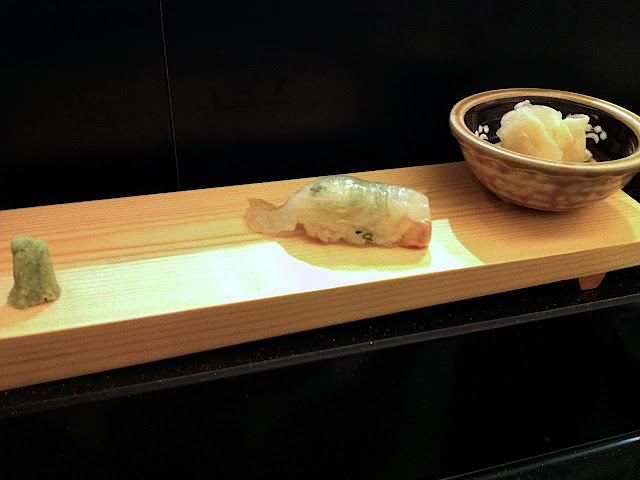 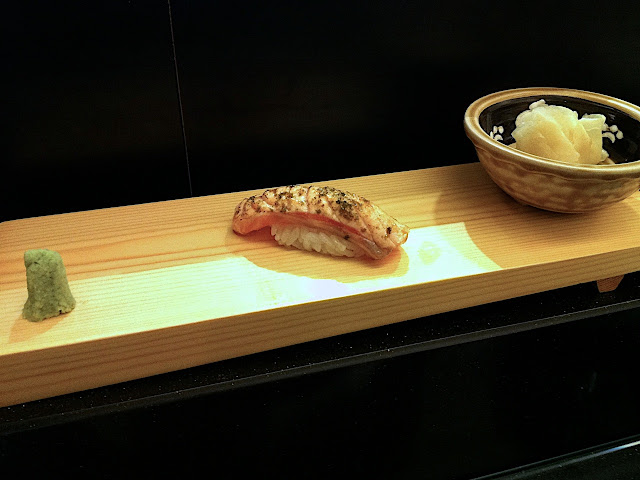 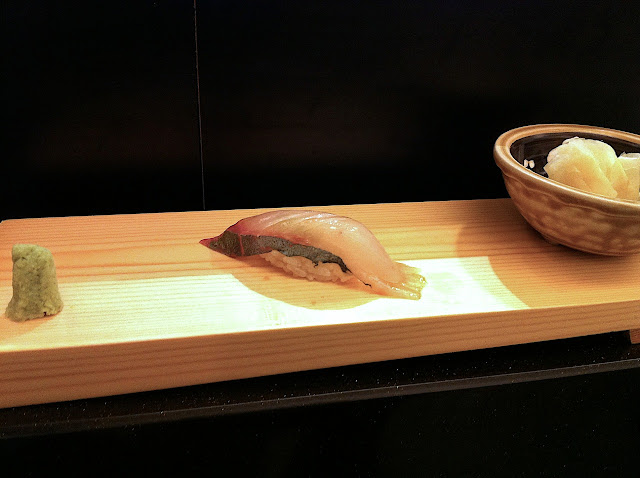 An old favourite of ours was the udon with truffle oil and Lawrence duly obliged (even though this wasn't on the 'menu' at that time). 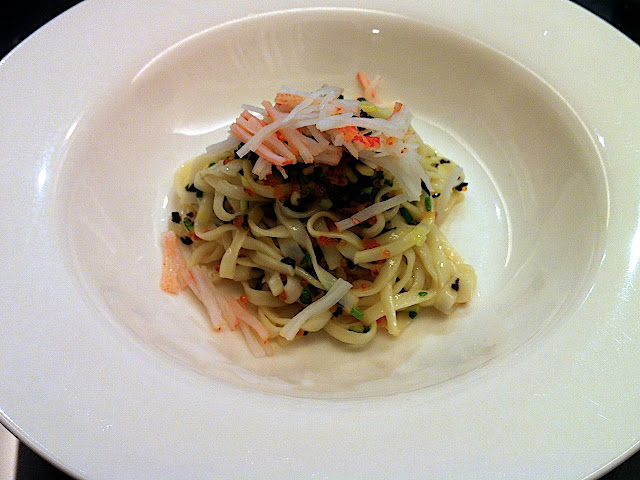 After a particularly full meal, we asked for a clear soup and was presented with a refreshing wakame (seaweed) soup (more like a seaweed-infused tea). 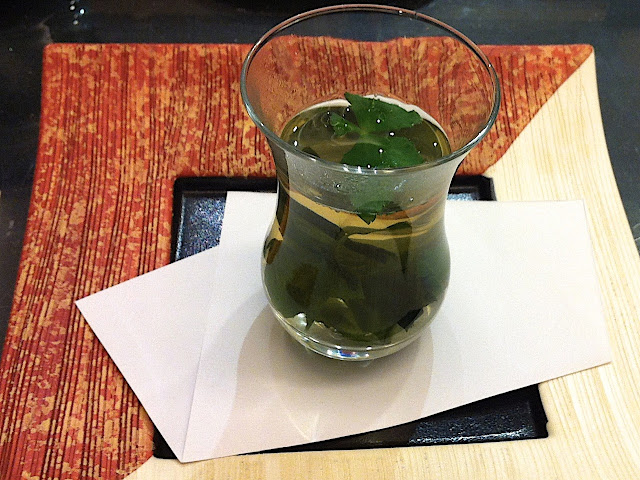 To further indulge myself, I had the champagne grape sorbet which I enjoyed thoroughly. 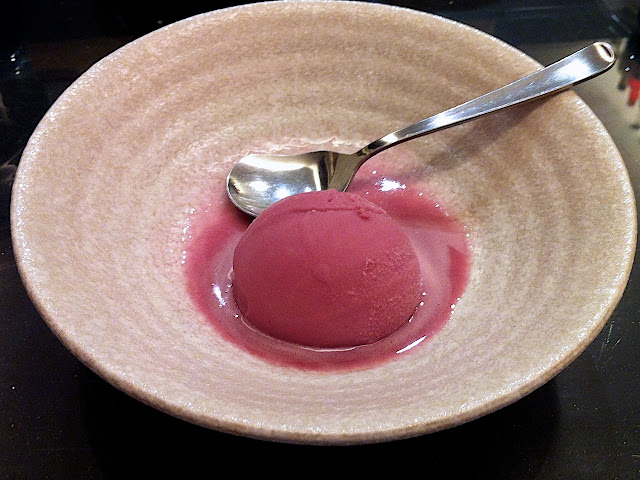 Final Thoughts: We feel that Hinoki is a hidden gem in Singapore and has reached a level where it deserves some mention. It may not have the snob appeal of some of the upmarket omakase places in Singapore and sometimes the kitchen (for cooked food) may be a bit inconsistent (though we've always found the sushi to be of high quality), we've always had a good meal here at excellent value. There are better sushi counters in Singapore, but though they may be twice the price of Hinoki or more, they are unlikely to be twice as good.
Posted by Smiling Lion