Gramercy Tavern is a one Michelin star American restaurant and another one in Danny Meyer's stable of eateries. It has an impressive bar area at the entrance (which serves food as well - no reservations for its tables though) and a fine dining restaurant at the back. Despite being named as a 'tavern' it has the decor and vibe which corresponds more to a upmarket wine bar than the traditional beer hall. 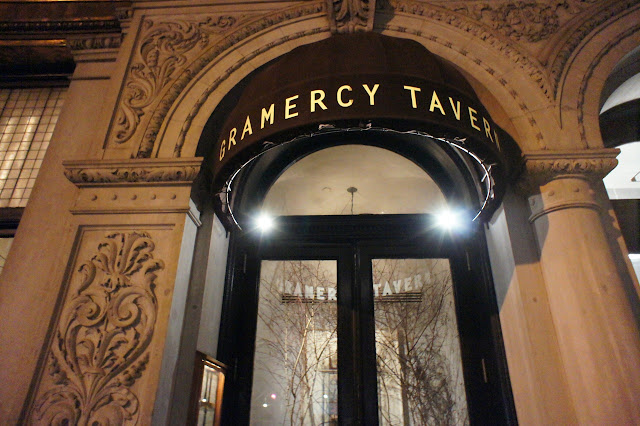 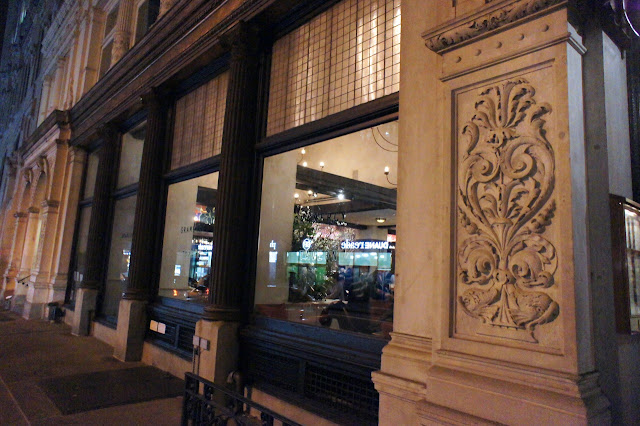 The restaurant was comfortable but we were started getting annoyed with the gruff and condescending manner of the wait staff, as well as a bread waiter whose english we couldn't understand. Service at our table was quite hurried and brusque that night.

This was a Sunday dinner and we had already lived through three Sunday breakfasts/brunches by that time and feeling the worse for it. And it was a godsend that the restaurant had a vegetable tasting menu which would have allowed us to take it easy on our stomachs after the past week of non-stop eating.

We were served a single cheese puff with some cheese shavings each, which looked a bit lonely on the plate. It was a quite cold and hard. 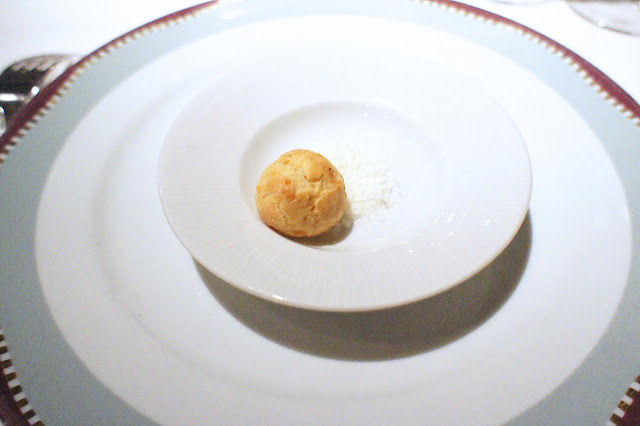 Winesap Apple - sorrell, buttermilk and horseradish: This was a cold dish which was all fruit and vegetables. It was a good palate cleanser but was surprising served as a first dish (when we thought that it would work in between two heavier dishes). 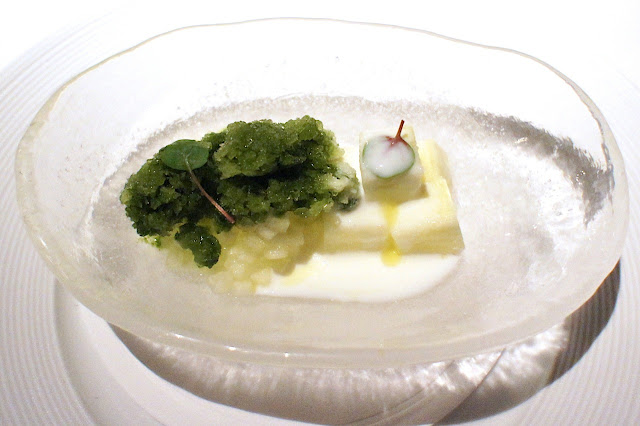 Kabocha Squash and Endive Salad - spicy maple dressing: I liked this salad quite a lot. It was quite well put together. 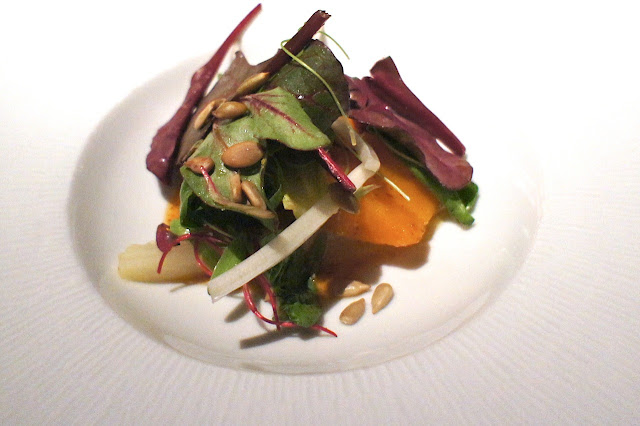 Sunchoke Soup - belgua lentils, lobster and parsnips: We were surprised to see lobster in our soup (given that this was a vegetarian tasting menu) but the soup (with the lobster in it) was very good nonetheless, so no complaints. 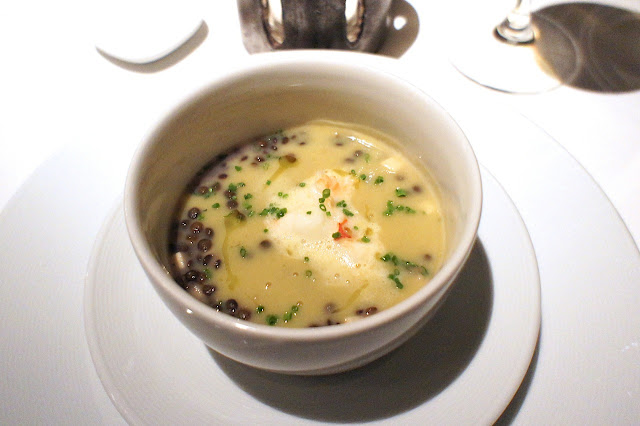 Ruby Crescent Potatoes - celery root, radish and trout roe: The potato puree at the base to the plate was quite a nice touch to the dish. The vegetables were fresh and crisp and the ingredients went well together. One concern we had was the rather careless manner in which this dish was served on our table, such that the sauces were sliding off the dish. Not sure what the chef would have thought of that after spending time arranging the food on the dish. 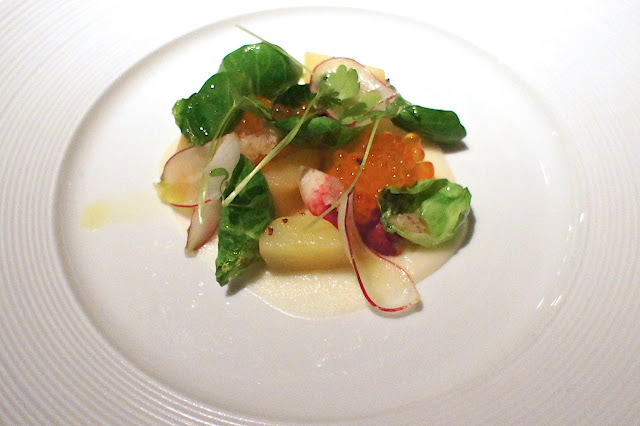 Spinach Fettuccine - shiitake mushrooms and chili: We did not understand this dish. The pasta was soggy and it tasted homemade (but not in a good way). 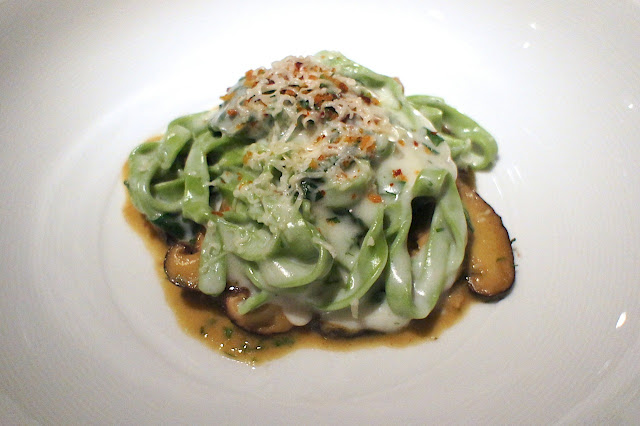 Tasting Dessert: the pineapple sorbet as pre-dessert and the coconut and passionfruit ice cream as the main dessert were very executed and we enjoyed them. 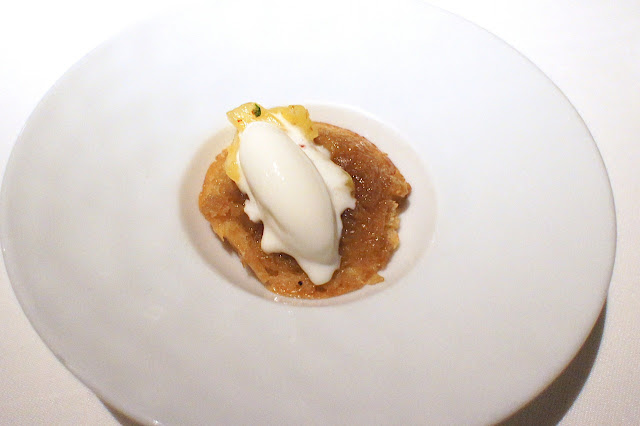 Petit four was decent with a nice selection of chocolate and macaroons. 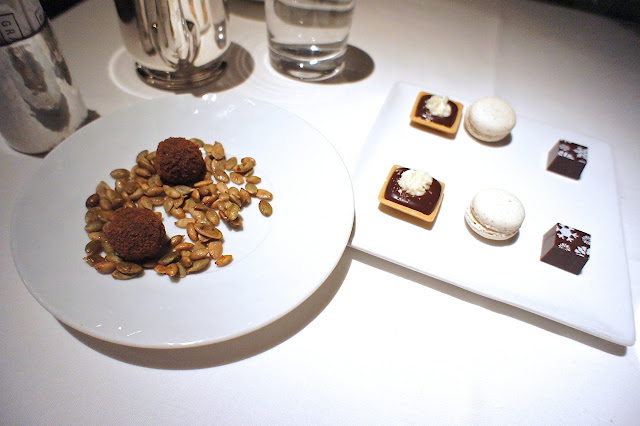 Final Thoughts: Less than satisfactory service marred this dining experience for us. The food was good but not exceptionally so and despite this restaurant being promoted as a 'tavern', the atmosphere was inexplicably snotty. We had read that the bar menu was better but the bar seating did not take reservations and as it was a Sunday night, we did not want to take chances. In hindsight, we should have tried to eat at the bar area instead of the restaurant.
Posted by Smiling Lion