Everyone has been raving about Manhattan's latest three Michelin star restaurant, and we couldn't wait to eat there during this trip. Dinner reservations were understandably hard to secure at such notice but we were fortunate to be able to get a table for a mid-week lunch. Housed on the ground floor of an art deco skyscraper next to Madison Square Park (where the famous Shake Shack is located - worth a separate blog post on this), Eleven Madison Park is the crown jewel of restauranteur Danny Meyer (who also owns Shake Shack, Gramercy Tavern and Untitled amongst many other restaurants in New York) and is helmed by Chef Daniel Humm. 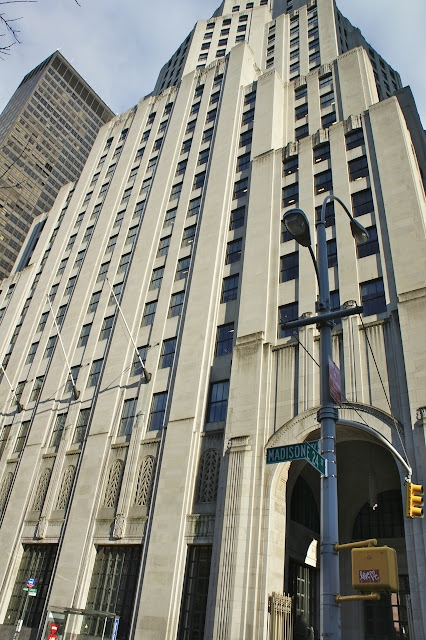 Entering through a revolving door on the ground floor, we found ourselves in a cavernous dining hall with very large windows (letting in lots of natural light). This restaurant appeared to be very heavily staffed, and service was highly professional with clockwork precision.

Eleven Madison Park had two menus for lunch, a unique four course lunch and the full degustation menu which was essentially the dinner menu. The four course lunch had an interesting concept: you had to pick four different items each representing an ingredient from a list, and after giving the waiter some guidance on some of your preferences, the chef will create a dish based on your request. We thought this was quite a daring and undoubtedly work-intensive idea by the chef, as it meant that he had to constantly be innovating to meet customers' requirements yet maintain a high standard of creativity and execution. As intrigued as we were by this idea, we decided instead to opt for the degustation menu (as we didn't have the opportunity to have dinner here and hence wanted the full dining experience in this restaurant while we were in New York). Being unable to do both the full degustation menu and the usual amounts of alcohol for lunch (also because we had a dinner reservation at Le Bernardin later that same day), we stayed sober with a glass of champagne and a glass of white wine each. 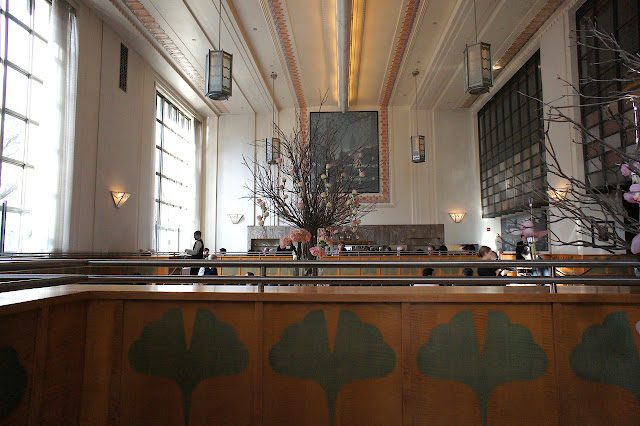 We were started off with some gourgeres (cheese puffs) which were quite nice (but not as good as those at Alain Ducasse at the Dorchester and Beige Alain Ducasse). They were great accompaniments to the champagne. 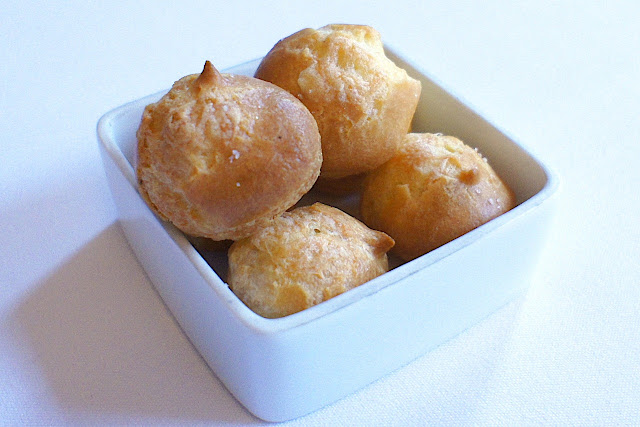 Then came a selection of amuse bouche: the roasted apple and celery tea with egg yolk tart with crispy bacon (picture below) and greek yoghurt lollipop with lentils and chick peas cerviche (next picture). The tea was very interesting while the tart and cerviche were unremarkable. The lollipop tasted like a Uncle Toby's muesli bar and was quite good. 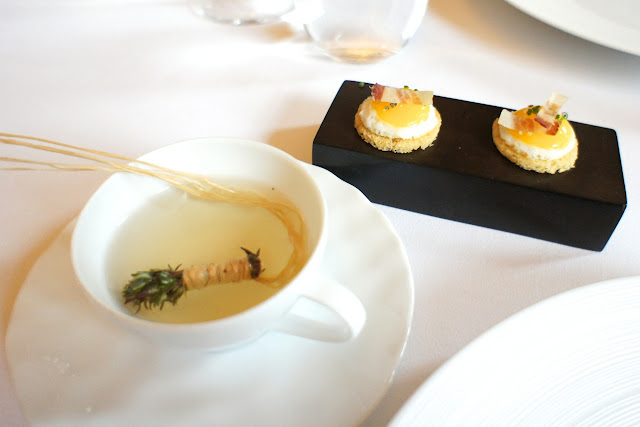 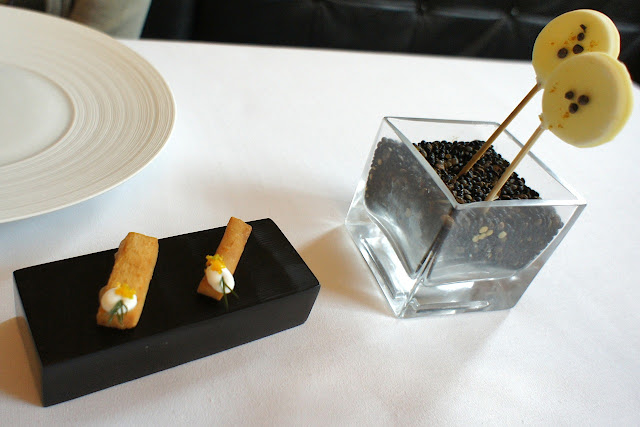 The standout amuse bouche was the sturgeon sabayon with cheese in egg shell. This was amazingly rich and delicious. 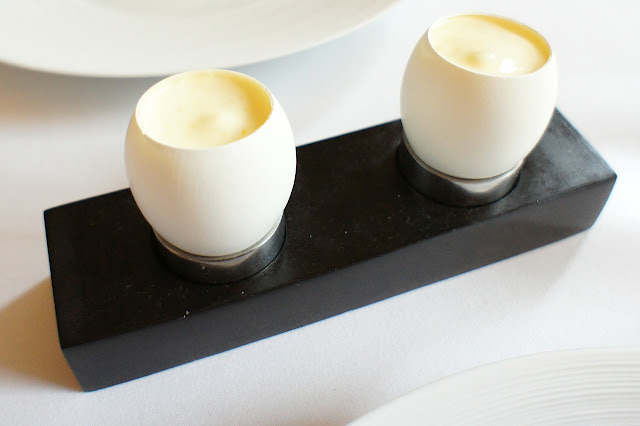 And as if it would never end, a flurry of additional small snacks were served, with a boiling pot of clam chowder, surrounded by plates of chorizo madeleines, clams with apple and clams with ham. They were all very good (but we were starting to get quite full by then!). 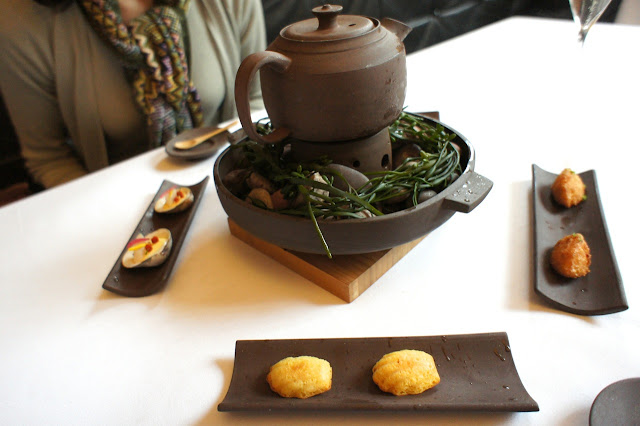 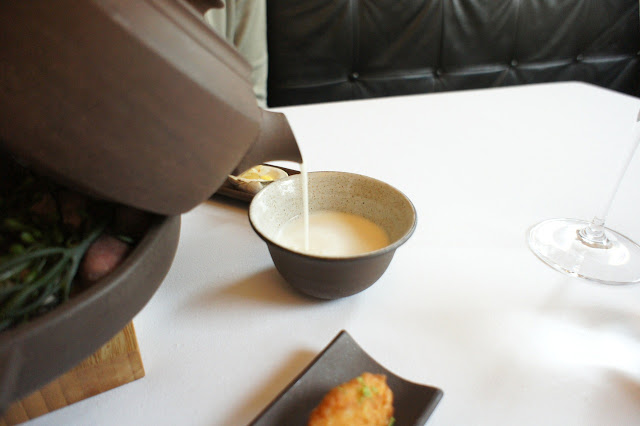 We were served goat's milk and cow's milk butter and some sea salt, together with some croissants (which were nice but I felt were quite oily - it got my hands really greasy). We loved the goat's milk butter though. 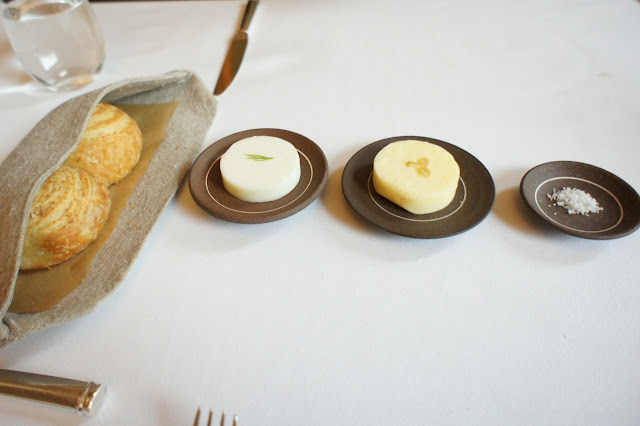 For the first appetizer proper, it was the puntarella salad. We were not familiar with this vegetable but the combination of the greens, together with the salad cream was very good. 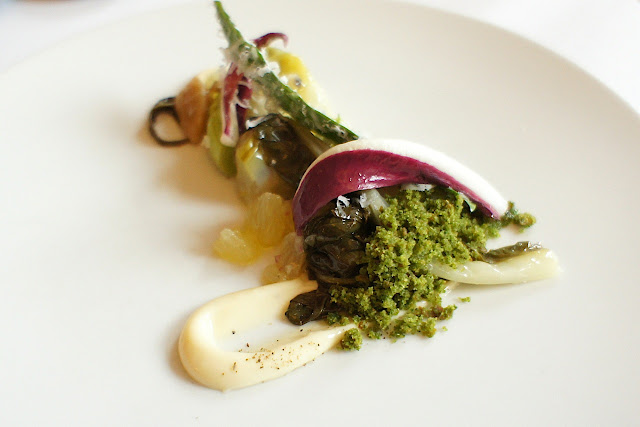 Next was the foie gras terrine with black truffle sauce, which was excellent. 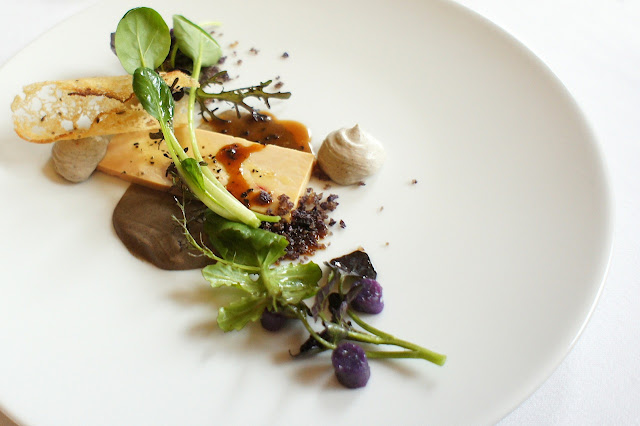 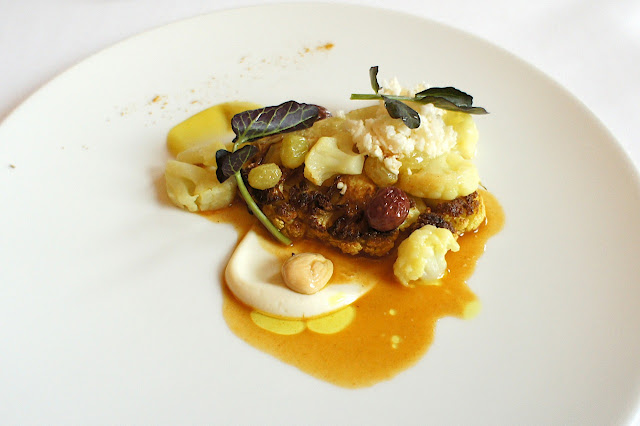 Lobster and leek was next and it was superb. The lobster and leek puree was particularly good combination and there was visual creativity as well with the dried leek leaves with roots still intact, and black balsamic meringue crumbs which simulated soil. 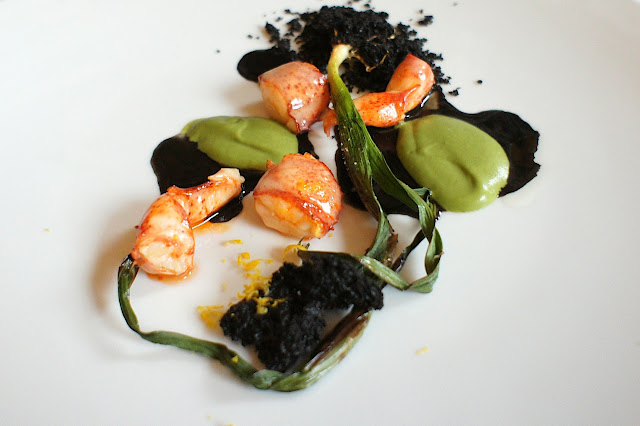 Perhaps the best dish of the lunch was the squab which was cooked to perfection and was paired beautifully with the beet and its puree. 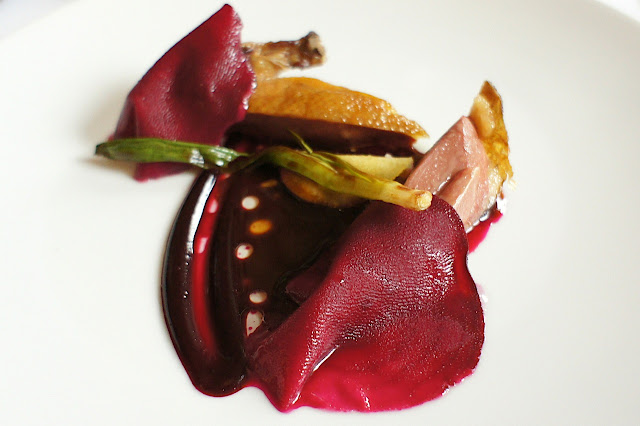 The cheese course was a light yet elegantly presented trio of plain, apple-flavoured and pumpkin flavored American cheese. 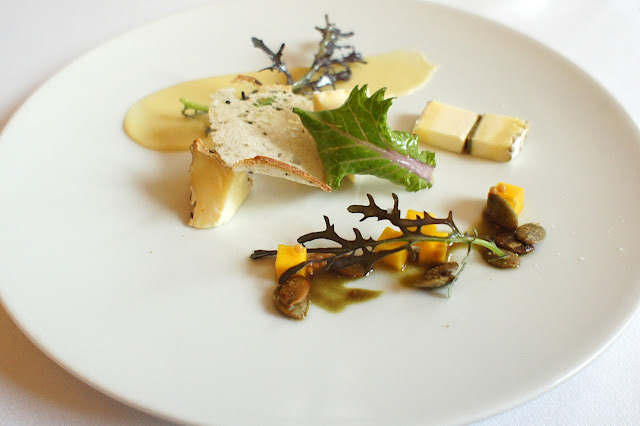 This was followed by a table-side preparation of an interpretation of the classic New York egg cream (made with chocolate-infused milk, orange liquor and spritzer soda). It was fantastic and is something I still think about from time to time. 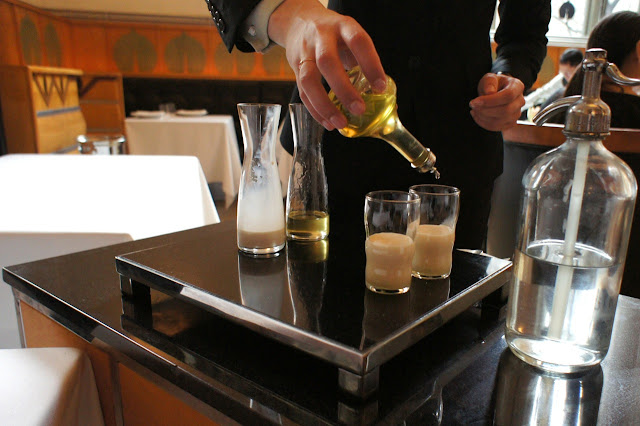 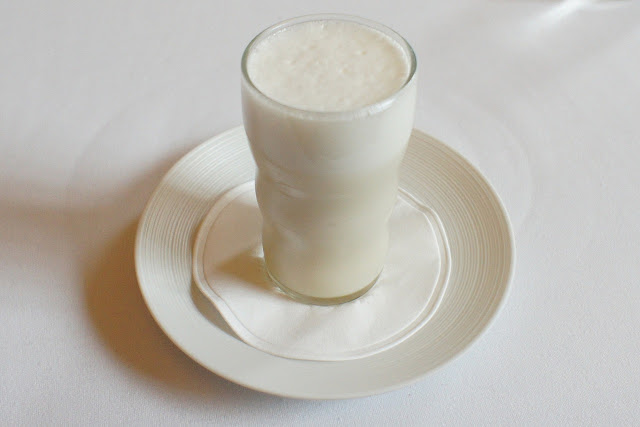 The first dessert was the deconstructed New York cheesecake and it was very good. 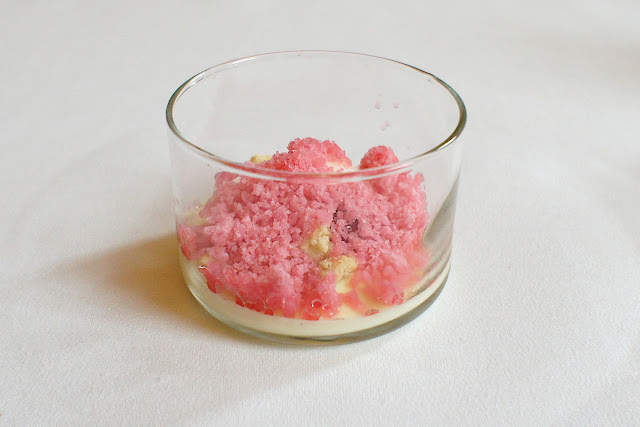 And finally, the chocolate dessert with dark and white chocolate. To be honest, this was slightly disappointing after the meal we had (or perhaps because we were too full to really enjoy it by that time). Also, just about this time, Chef Humm came out of his kitchen and we had a little chat with him at our table, hence distracting us from this dessert course (it was, though, heartening to know that the chef himself was in the kitchen cooking that day, and it showed in the food). 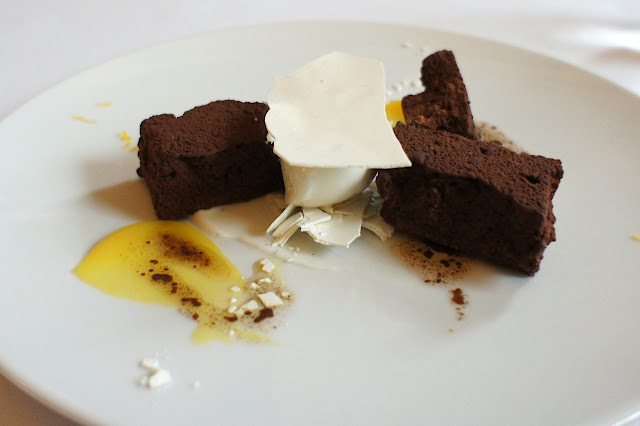 To end off, some fancy black truffle tarts in lieu of the typical petit four just to remind us of how special this restaurant was. 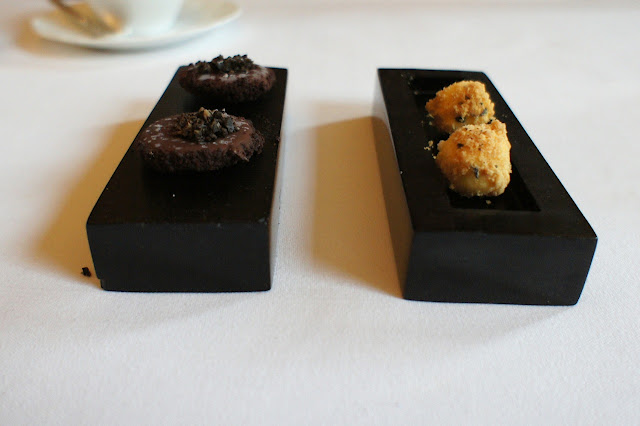 Final Thoughts: Brilliant meal, almost every course was flawlessly executed with impressive creativity to match. It was a feat to have finished this entire meal over lunch but it was worth it. We actually had a negative impression of the dining room as it was too large and made dining here feel quite cold and impersonal (perversely, it reminded us of eating in a school canteen), though this was compensated by the very friendly service we got throughout our meal. Perhaps at night under dimmer lighting, the ambience would be cozier.
Posted by Smiling Lion