So it was back to Andre for our long-awaited dinner (after the lunch I had here a few months ago piqued my interest - see earlier review: Andre Sep 11). It took us a while because of our long Italy trip in October and the fact that this must be one of the hardest restaurants in Singapore to get a reservation. Despite many efforts, we were not able to secure a table even 10 days in advance (we typically find it hard to book anything further than that as our own schedules are quite fluid). However, I had put my name and contact details with the restaurant manager, Stepan, such that he will contact me whenever he has a last minute cancellation and he can sit me for the evening.

It was indeed one such Friday that I received an email from Stepan about an available table, and we weren't about to turn it down. Having eaten there in the daytime, I was quite curious how the dining room would look in the evening (in the day, there was a strong reliance on natural sunlight through the windows and I was concerned that at night it would be too dark). However, as it turned out, the main dining room which could accommodate 6 tables of 2 pax each was very well lit (a little too well lit I though, but this was good for my photo taking so no complaints there).

At Andre, there is no a la carte menu for dinner but only a prix fixe menu which describes the 'theme' for each course as imagined by Chef Andre Chiang. The waiter will take instructions on preferences and allergies but all else is left to the Chef. I was quite surprised that we weren't shown a wine list though, and in that respect it was a bit disappointing. They did ask if we wanted wine with our meal (to which we said yes of course) and they proceeded to pair our courses with different wines (which to be fair were very well chosen). 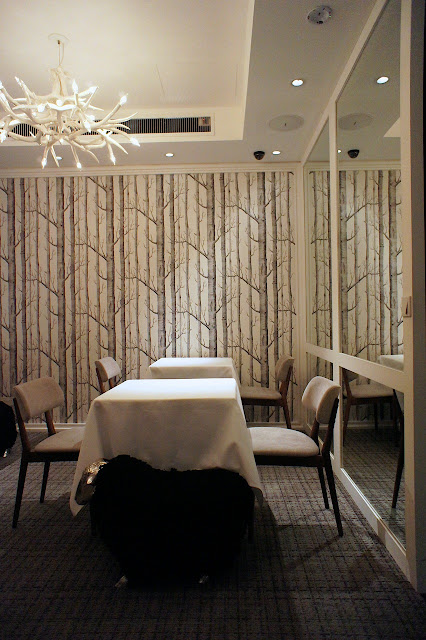 Service at the beginning was unusually slow, and they left us unattended for what felt like a long time before even asking us if we wanted an aperitif (we'd expect that this should be the first thing they ask when we are seated). The food also took a while, but once it came, the remaining dinner took on a reasonably brisk pace.

We started with an interesting selection of amuse bouche. It was a selection of different bite-sized for d'oeuvres. This was reminiscent of how they did it in Piazza Duomo in Italy.

These consisted of the garden of deconstructed fish and chips and baked potato which was quite interesting. 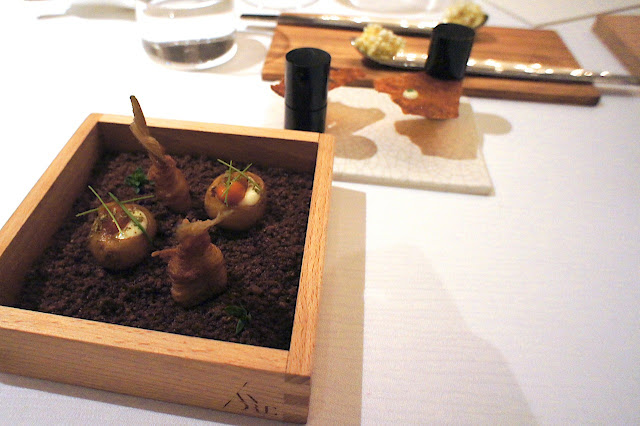 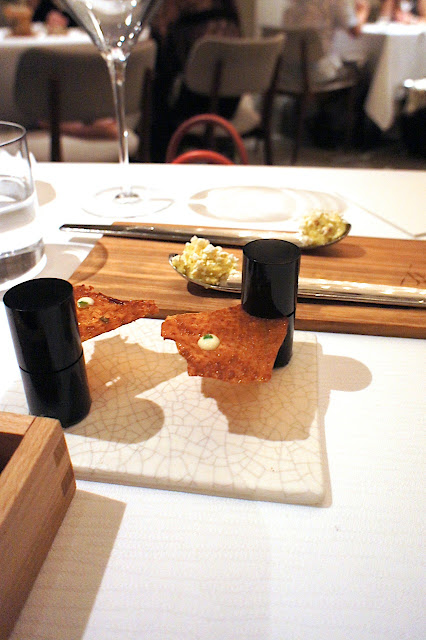 Then there was the popcorn with vanilla cream on a metal spoon, which was sweet but was quite lost on me. 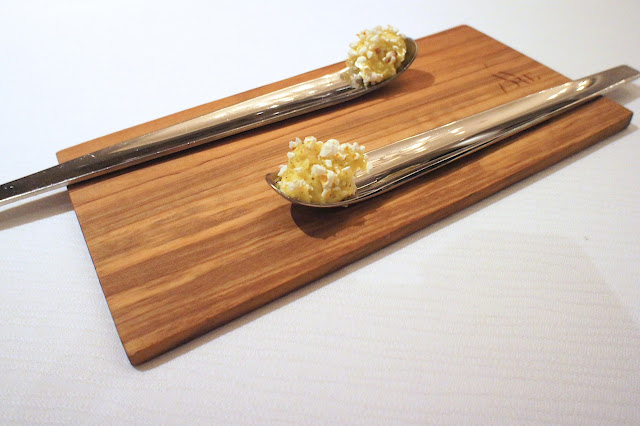 My favourite was the mushroom crisp (I had this during the lunch here as well) but salmon tartare (wrapped in paper secured by a wooden clip, which had to be removed before eating it) was quite ordinary and we didn't understand the whole wrapping thing. 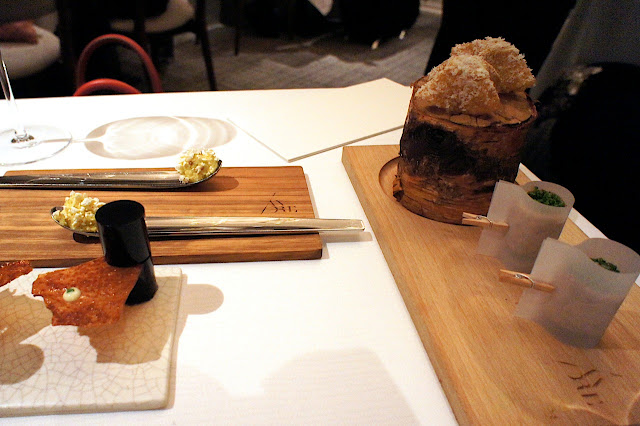 Pure: assortment of various flowers and vegetables with kaffir sauce. This was the first course, and was quite a good mix of ingredients. The kaffir lime was a good touch and brought some pleasant acidity to the dish. 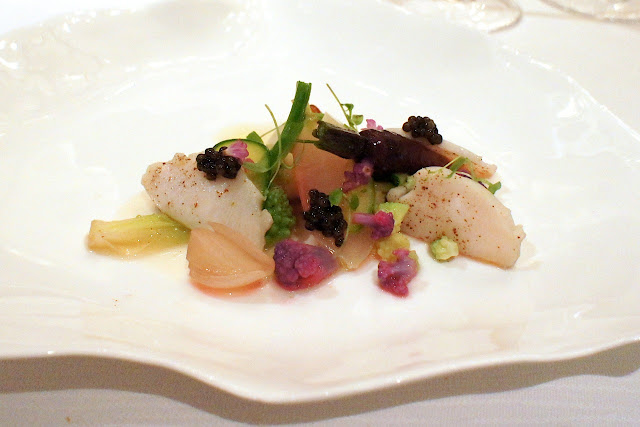 Salt: 'seawater' mash with deep-fried oyster gnocchi. The breaded oysters were very good and the mash decent, but we didn't think the 'seawater' taste really came out of the potatoes (other than the fact that it was salty). 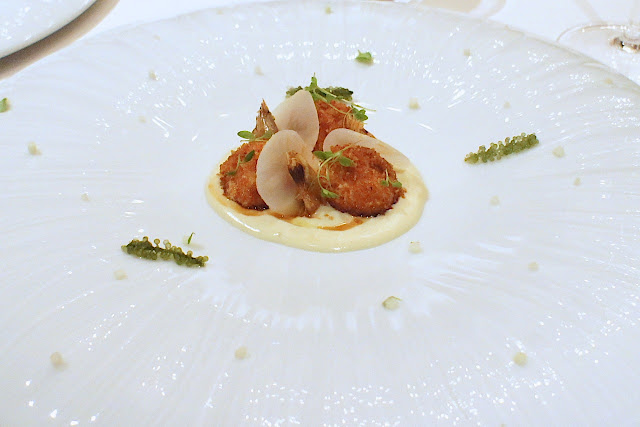 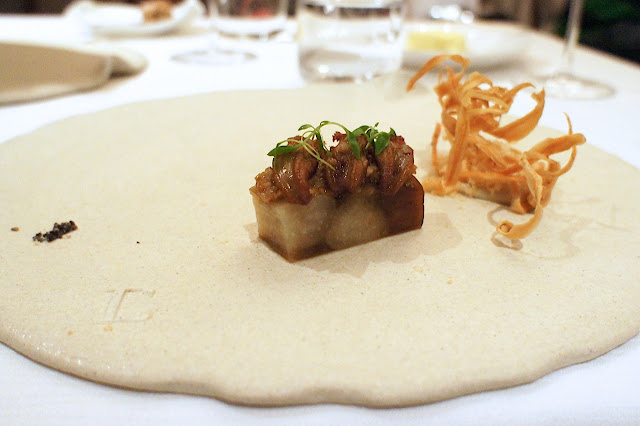 South: raw fish with sorbet, japanese rice with grilled turbot, raw prawn, raw mackerel. It was at this point that the dinner started to get seriously good. The sashimi and sorbet combination was superb and the 'chirashi' of raw fish on japanese rice was simply divine. 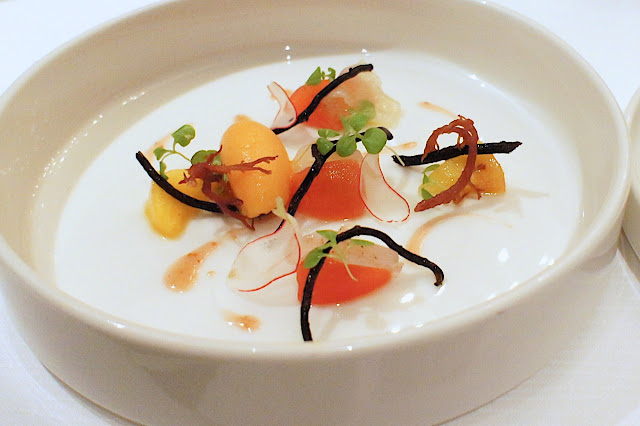 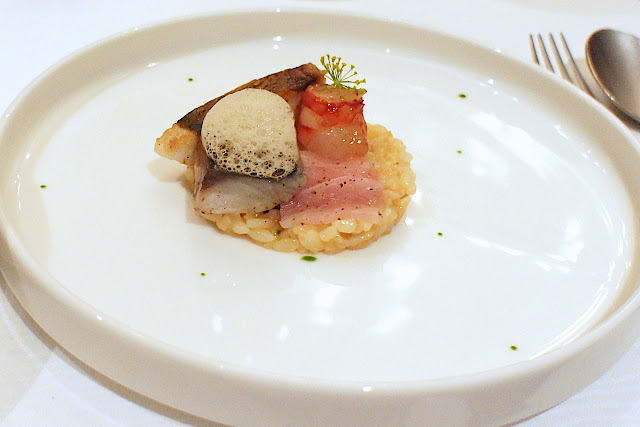 Texture: potato in different ways, with squid, petit pois and chili flakes. Next was a very clever and visually stunning creation of squid, chili flakes and pea, accompanied by potato puree and potato puff. This tasted fantastic, though we took issue with the description which implied that the potato took centre stage (when it was merely an accompaniment to the squid, we felt). 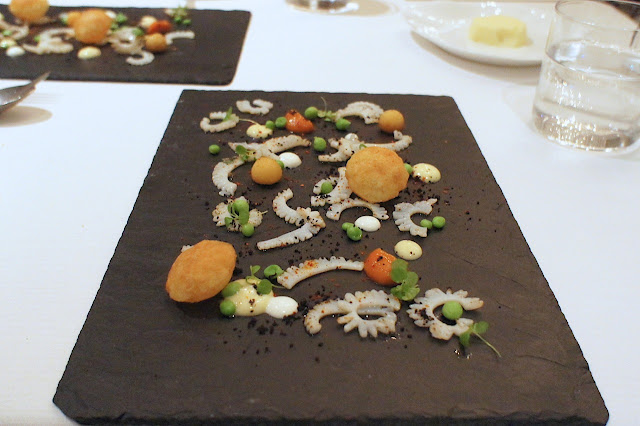 Unique: barracuda with beurre blanc sauce. A very french style fish dish but asianised by the use of citrus to give it a tangy flavour. We thought it was very good. 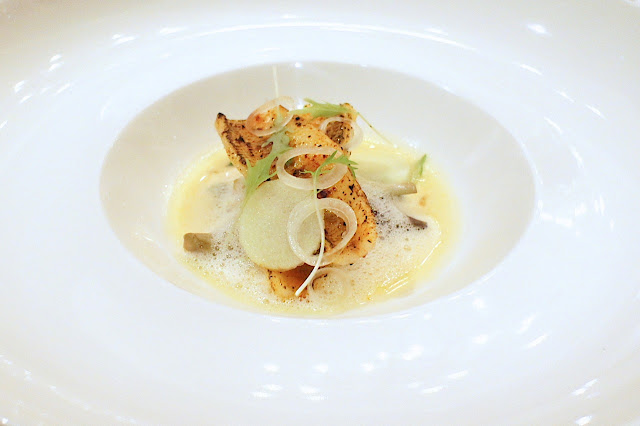 Memory: Foie Gras with truffle jus. This was my favourite (and it was the one dish I had at the previous lunch which convinced me to return). Rich and decadent, and I could not have enough of this. 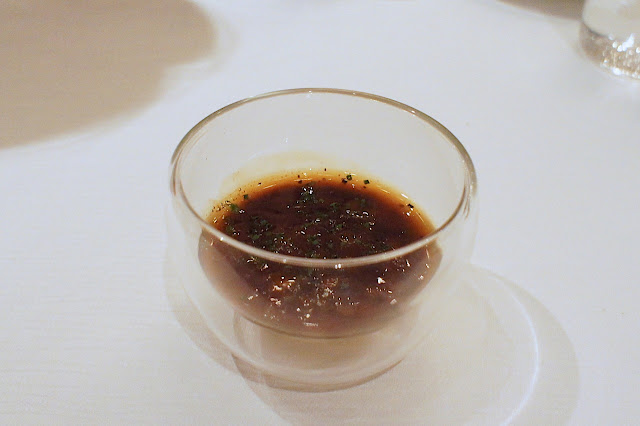 Terroir: Rack of rabbit with mustard seed, petit pois and root. The main course was a very light yet tasty rabbit meat which was cooked very juicy and tender. I don't usually get good experiences with rabbit which tends to be overcooked, dry and bland, but this was very good. We thought the mustard seed was a nice touch as it added a touch of sophistication to the dish. 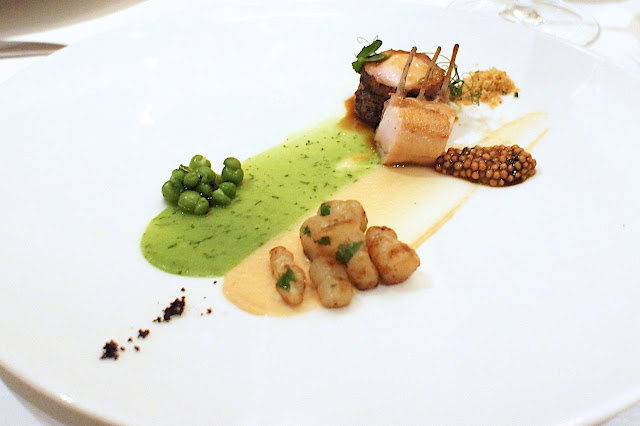 Pre-dessert of Burrata ice cream with milk skin and rice crisps. This was an 'unsweet' dessert which was quite a good idea as it was a bridge between a savoury meat main course to an actual dessert which is bound to be sweet. The rice crisps provided the fun and the milk skin gave it the texture. 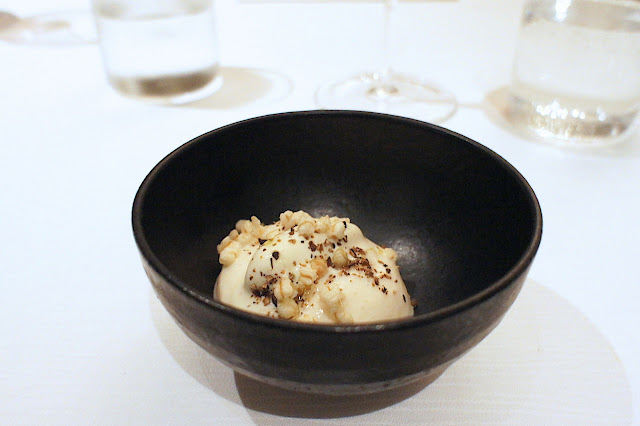 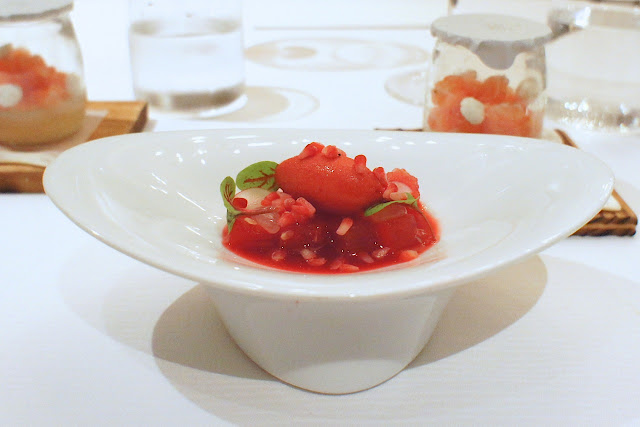 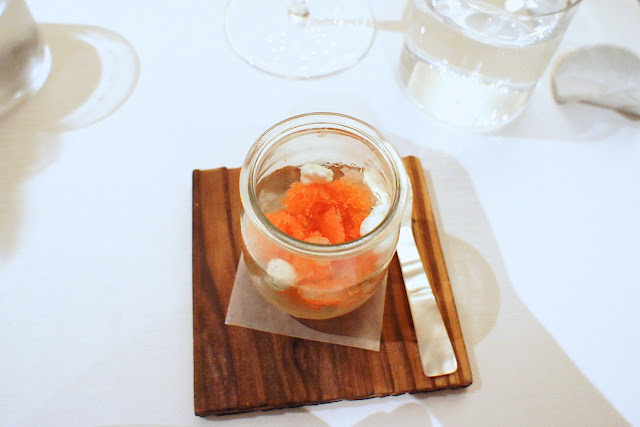 Deconstructed snickers bar. Dessert 2 was the house specialty, a mix and mash of the ingredients found in a snickers bar, i.e. nuts, caramel, chocolate. Delicious. 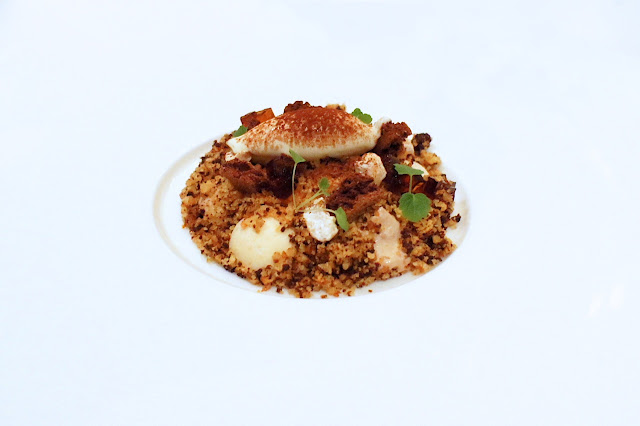 Petit four was surprisingly good with a selection of marshmallows, popcorn, madeleines and sugared jelly. 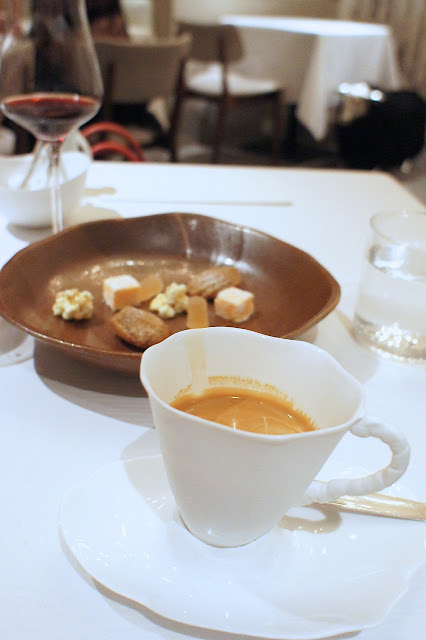 Final Thoughts: We felt that this restaurant lived up to its hype, though we'll probably need to come here again a few more times to see the range of Chef Chiang's repertoire to form a proper view. His creations were mostly very interesting and well executed, and we didn't feel that he sacrificed the cooking for visual effect. Service levels (aside from the delays at the start) were high but it's a pity that they didn't show us the wine list (perhaps they don't have one). In our view, it is probably the best restaurant in Singapore outside of the celebrity restaurants at the 2 integrated resorts.
Posted by Smiling Lion