I finally ate at Andre. I've been holding off going there for a while for a variety of reasons but this was a birthday lunch treat by a friend so there were no excuses this time. I ate at Andre Chiang's restaurant at Jaan at the Swissotel Singapore many years ago, and though the food was excellently prepared and presented with high technical precision, I was not sufficiently wowed to join the stampeding masses in trying out his new restaurant. With due respect to Singaporean restaurants, I am typically very cautious of hype, as it is my experience that fine dining in Singapore can (up till recently with the entrance of the celebrity chefs like Tetsuya, Guy Savoy, Joel Robuchon and the late Santi Santamaria amongst others) be over-publicised to the extent that the quality of the food and dining experience is overshadowed by the desire by diners to be seen eating in such a restaurant. Fortunately for all of us, the new celebrity chef restaurants have raised the bar for Singapore fine dining such that marketing and publicity is no longer sufficient to ensure that a fine dining restaurant is highly regarded in Singapore.

It didn't help that there was a lot of hype about Andre. There has been countless profiles in the magazines and newspapers about his new restaurant, and he himself appears frequently on TV. Hence my skepticism. A bit unfair, I admit, which is why I was looking forward to trying out lunch here to prove myself wrong.

His new restaurant (not that new anymore, it was open almost a year ago) is located in an old conservation shophouse next to the New Hotel Majestic, in a space formerly occupied by the hotel bar. It is has a narrow and long layout, which, as a bar was not very practical (when crowded, it was difficult to get from one end to another), but as a fine dining restaurant, perfect, since booths or tables can be stacked in single file ensuring privacy for the diners.

Andre is essentially a modern French restaurant, and Andre Chiang has a very impressive CV, having worked in the kitchens of some of the most illustrious French chefs like Michel Troisgros, Pierre Gagnaire and Pourcel brothers amongst others, and so his technique and philosophy would be well-honed. He demonstrates a broad philosophy with regards to the overall dining experience, which is evident from the moment you step into his well designed restaurant. His wall paper, light fixtures, cutlery and tableware are deliberate inclusions in his philosophy, which complements his signature "Octaphilosophy" (i.e. eight food characteristics). In many ways, his restaurant and food philosophy (though not necessary his food) reminds me of a 3-Michelin star restaurant in Italy, La Calandre (see earlier review: La Calandre) in that the chef, Massimiliano Alajma also draws, paints and personally designs his furniture, restaurant interior and tableware.

Lunch here was a 5-course affair, and there was only one prix fixe menu. Fortunately it didn't look like the typical set lunch menu with simple easy-to-mass-produce-quickly dishes customary at some fine dining restaurants catering to a busy business lunch crowd, but what looked like a condensed version of what could be a more extensive dinner menu. 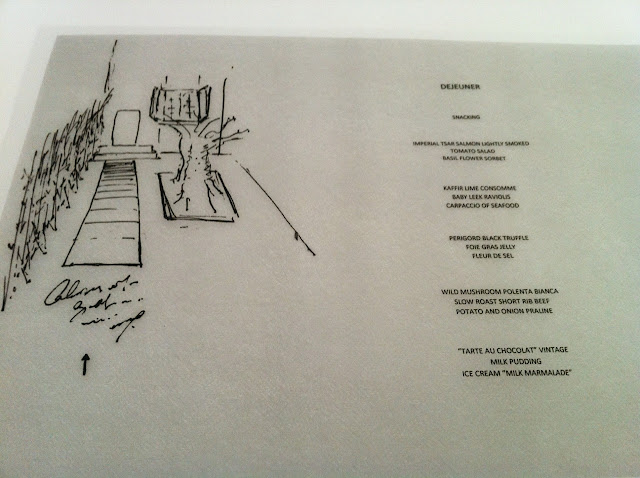 Amuse bouche was a very tasty mushroom crisp, which truth-be-told, I would have bought a bag of it if Andre sold it in pre-packed form. 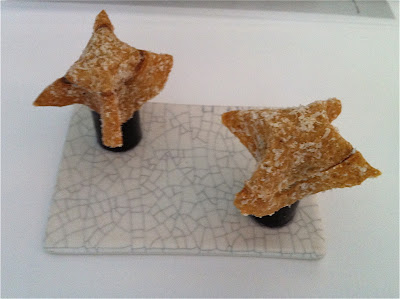 Imperial Tsar Salmon Lightly Smoked, Tomato Salad, Basil Flower Sorbet - this was simple yet well put together. It tasted very light and refreshing (especially with the help of the basil sorbet which was delicious) but was balanced out by the savoriness of the smoked salmon. There was a good mix of flavours and textures: soft raw fish, cold sorbet, sweet tomatoes, crunchy radish and sour cream. 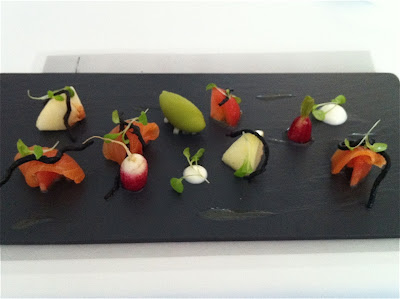 Kaffir Lime Consommé, Baby Leek Raviolis, Carpaccio of Seafood: I really loved this dish. The consommé was amazing, as the kaffir lime flavours really came out strong. It was one of those dishes where I was tempted to lick the bowl dry after that. The three pieces of seafood (seared snapper, grilled scallop and raw yellowtail) added substance to this dish but it was the consommé which took the plaudits. There were 3 tiny raviolis at the bottom, there were so small I couldn't really taste them. Not sure if the raviolis really added anything to this dish. 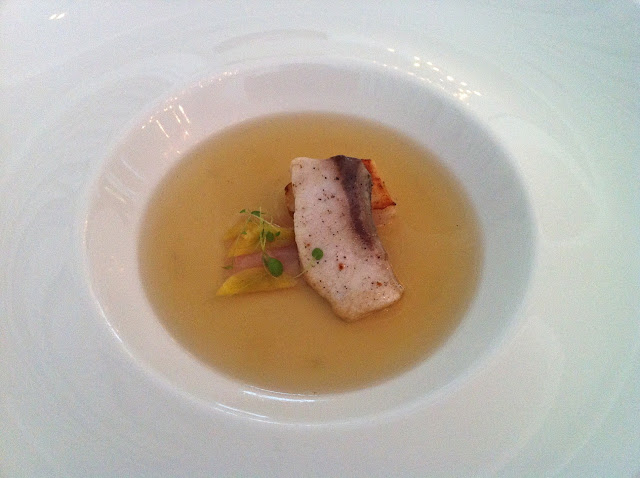 Perigord Black Truffle, Foie Gras Jelly, Fleur de Sel - this was another superb dish. There wasn't so much foie gras as to overpower the entire dish and the combination between the foie gras jelly and the black truffle sauce was amazingly rich and satisfying. 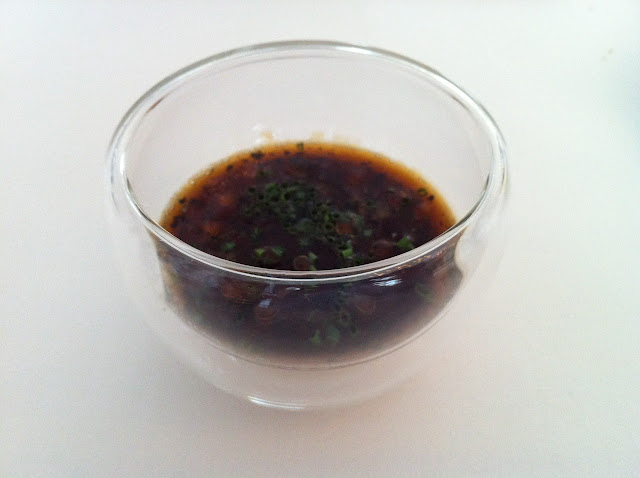 Wild Mushroom Polenta Bianca, Slow Roast Short Rib Beef, Potato and Onion Praline - the main course was also highly enjoyable. The beef short rib was cooked to perfection and was both succulently juicy and delectable. Not forgetting the wild mushroom ragout which was also very good. 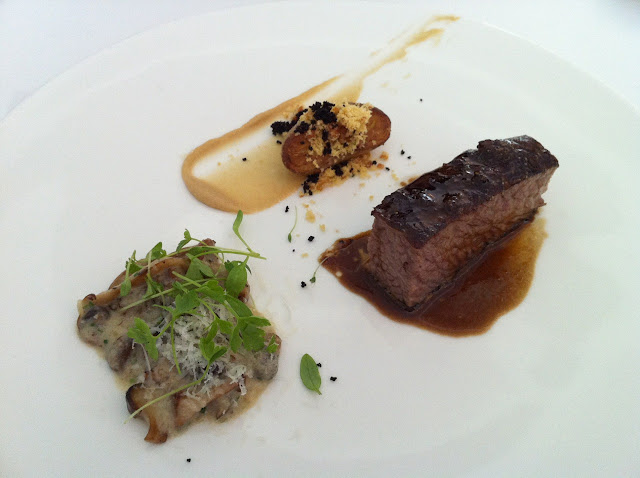 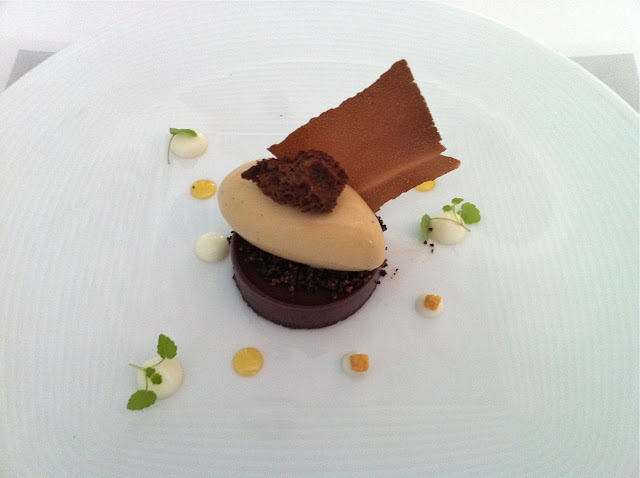 Even the coffee was served on a uniquely designed coffee cup, though I have to warn that the cup itself does not have a flat bottom but it's round base sits (rather precariously, in my view) in a mold in the plate, hence it is possible for the cup to tip over rather easily. It's all in the creative design of Andre. I wasn't really prepared to take good photos at this lunch (hence had to make do with my iPhone) but I hope that the lighting at night for dinner is conducive for proper photo-taking. 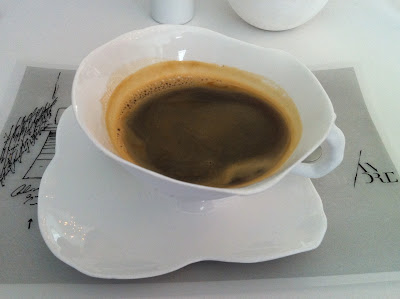 Final thoughts: I seldom write so much about a lunch, but this was a superlative lunch at a restaurant which I may have pre-judged unfairly. That said, I am now trying to make a booking for dinner and will have a better feel of the place after a full dinner here.
Posted by Smiling Lion