Update: Tim's Kitchen Macau lost its one Michelin star in 2013.


Tim's Kitchen is a 2-Michelin star chinese restaurant in Macau and is the sister of the similarly named restaurant in Hong Kong (see earlier review on Hong Kong's Tim's Kitchen: Tim's Kitchen Hong Kong). This is supposedly the better of the two, as Chef Lai Yau Tim has been known to spend more time at the Macau restaurant in recent years. Our experience at the Hong Kong restaurant did not impress us too much, but with our friends and third party reviews raving about Tim's, we felt that we should give it another try to see what the fuss was all about.

We came here for lunch, in the same hotel we were at the previous night for dinner at Robuchon. The decor is not impressive, as it was simple and quite old. Even the entrance was quite plain, with sakura floral prints adorning the sign board making it look at first glance like a low-end Japanese restaurant. We were given a large corner table by the window with good views of the lake (though the air quality in Macau was very poor and the views were partially obscured by the smog). 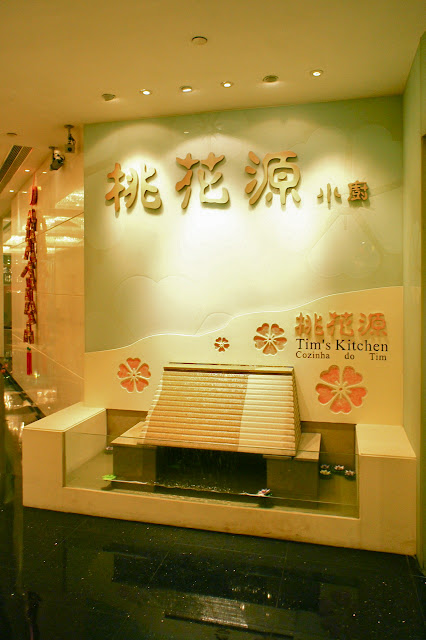 We asked for the wine list and was pleasantly surprised when the waitress came over with the same massive wine list as in Robuchon. But this time, I was not offered the iPad and had to flip through the large book to pick up a 2008 Puligny-Montrachet Premier Cru Les Folatieres from Henri Boillot, which was a very nice Chardonnay complementing the Chinese food well. 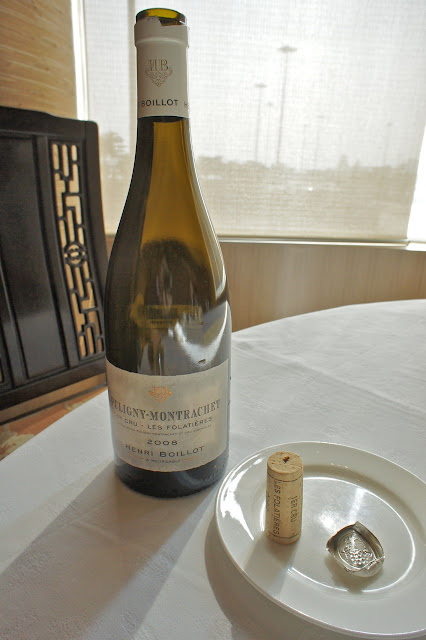 We were initially quite keen to order some dim sum, but fortunately we were told by the very friendly male waiter (who spoke excellent English) that the restaurant outsourced the dim sum to the Hotel Lisboa cafe and it was not made in Tim's. Initially, one of the waitresses came over and recommended most of the dishes we had the last time in HK, to our great reluctance. The male waiter then came over to our rescue again and helped us pick some of Chef Tim's other specialty dishes. We each started with the crystal prawn (accompanied by a slice of pork jerky, which strong taste balanced out the subtle prawn), which was a large portion for one person. The prawn was snow white and was quite exquisite. 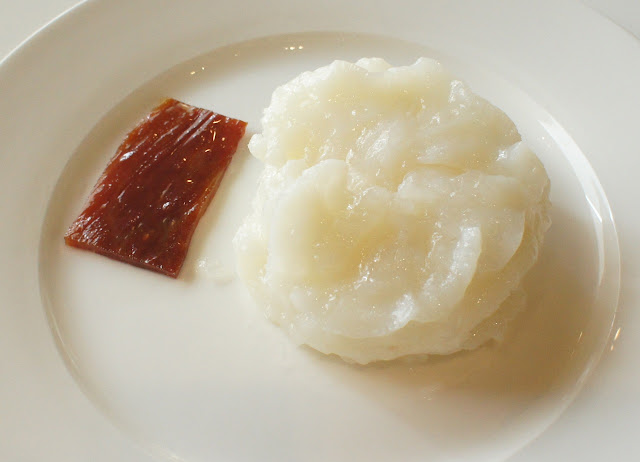 Next, we each ordered the deep-fried crab claw with peppercorn, which was another superb dish. This was one to die for. 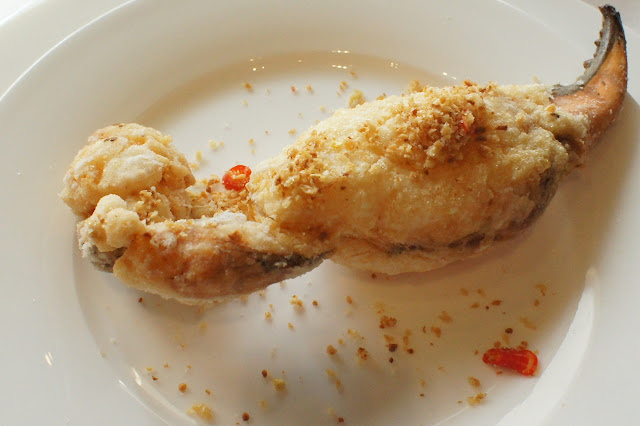 I had to try the snake soup with shredded snake meat, while my wife could not muster up the courage to try it and picked instead the black chicken consommé with sea whelk. Her soup was very good, while mine was also excellent. The snake soup and snake meat tasted like shark's fin but with a stronger taste. It was an intense soup which made me feel warm all over almost immediately (and caused me to have a sore throat after 2 hours). 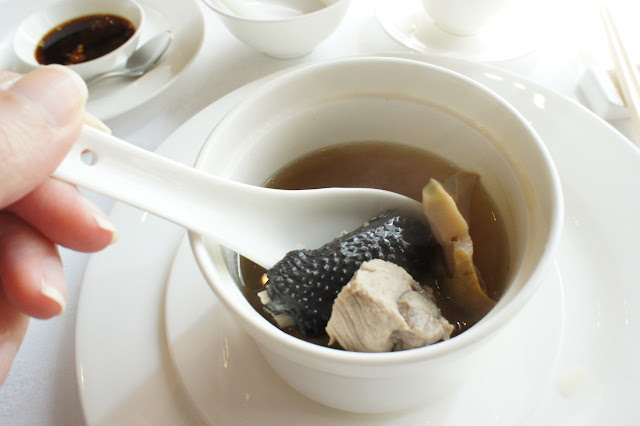 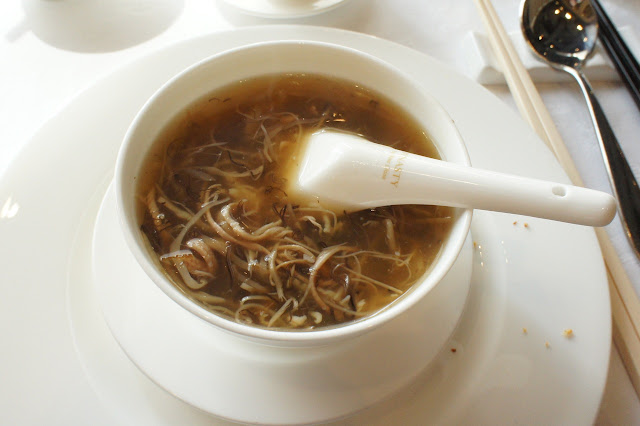 After that, we had the sliced beef with vegetables and the pork pie with salted fish (which in particular went very well with the wine) 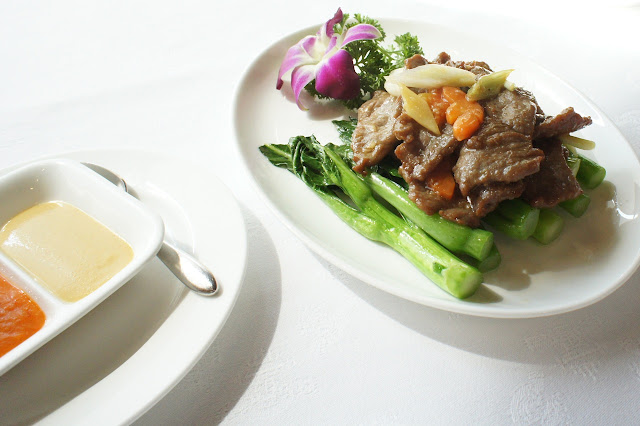 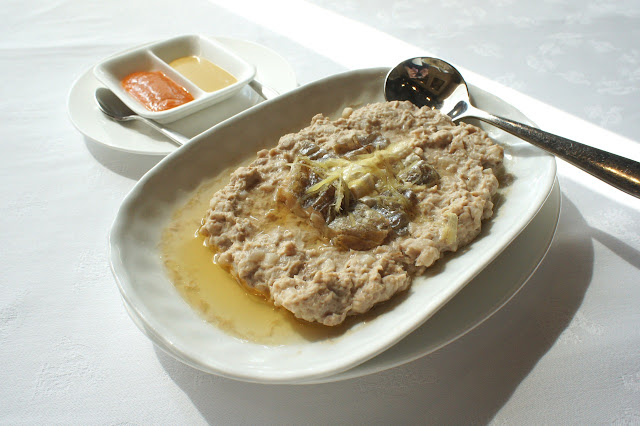 For dessert, we ordered the egg custard bun and papaya soup, which were also very good. The papaya soup was especially helpful in cooling me down after the very 'heaty' snake soup. 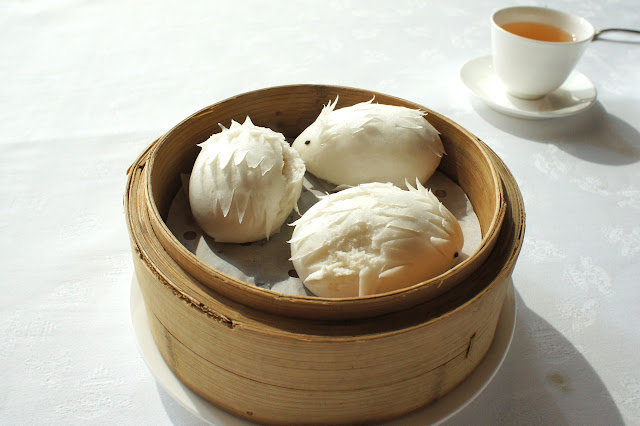 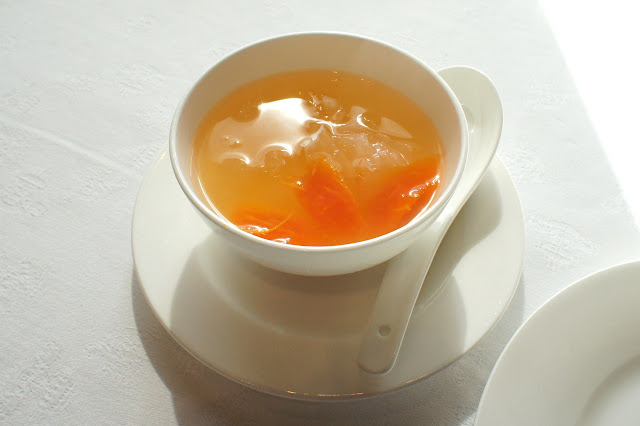 We really liked this restaurant. It was a simple and unpretentious place but with delicious food and an impressive wine list. It was much better than the HK one (I managed to get the waiter to admit that it's not the first time he's heard this said as well).

Food: Superb, restored my faith in Chef Tim
Wines: Exactly the same wine list as Robuchon upstairs, what can I say
Ambience: Nothing to crow about, looks like any other Chinese restaurant but interior is quite old and tired
Service: Very good, especially in helping us pick our dishes