Update: It was just announced recently that Santi will be closed from early March 2012. This was not a surprise development especially after the passing of Santi Santamaria as his family has decided to consolidate and concentrate on the restaurants in Spain instead. It is a great misfortune for the Singapore dining scene with the withdrawal of such a good restaurant and the standards it has set during its time here.

With the opening of the Marina Bay Sands and Resorts World Integrated Resorts (politically-correct way of describing a casino nowadays), the dining scene in Singapore has been taken up a whole new level with the flood of 'celebrity chefs', each jostling to make an impression in a new market. At Resorts World, Kunio Tokuoka from Japan is already open while Robuchon will be here later this year. At Marina Bay Sands, lineup of celebrity chefs is even more impressive; from the much talked-about Waku Ghin (by Tetsuya) and Guy Savoy, to Santi, Cut (by Wolfgang Puck), Mozza (by Batali) and DB Bistro Moderne (by Daniel Boulud).

As a result, the fine dining standards in Singapore have been redefined, and the few local fine dining establishments which have monopolised the market in the past decade will be forced to shake themselves out of complacency or be left behind.

We went to Cut a month ago but as the place was too dark (it has the setting of a club, with loud clubby music and a distinct lack of lighting), we could not take any meaningful pictures to post, hence our first review of a 'celebrity chef' restaurant in Singapore will be Santi, which we dined at in January this year. 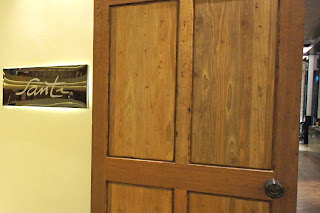 Of the stable of celebrity chefs in Singapore, Santi Santamaria is probably one of the less well-known in Singapore. He is one of the top chefs in Spain with a couple of very highly regarded restaurants in Spain, but this is his first foray into East Asia. His restaurant here is located on the second floor of the Casino, and our take of the decor was 'country chic' with wooden floors and exposed brick walls. At first glance, it did not appear to be a very luxurious setting, but once we were seated, the tableware and glassware, as well as the service, were of the standard expected of a top restaurant. 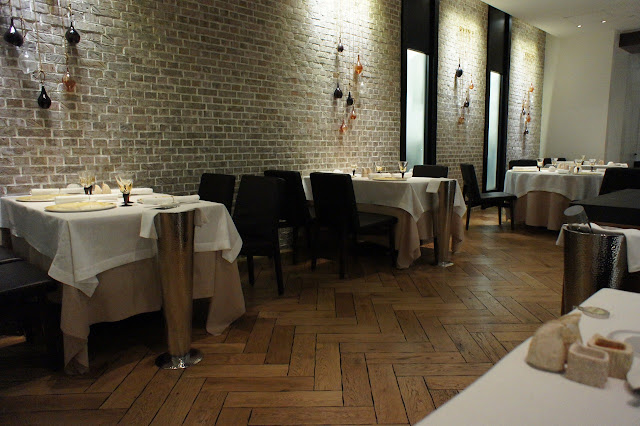 We were given a table next to the glass window overlooking the shops below, which was rather distracting (during dinner we were watching what we assumed to be a hotel guest take a jog around the shopping mall complex). For our next visit, we will be mindful to make a reservation for one of the booth tables which is more cozy and private. While we were going through our menu, we were served with some chips and dip, as well as some champagne. The wine list here is moderately extensive but not overpriced by Singapore restaurant standards; we ended up picking a 2007 Gevrey Chambertin Premier Cru (can't remember which vineyard though) which was reasonably priced (relative to the rest of the wines on the list) and paired very nicely with our meal. We opted for the 8 course degustation menu which showcased some of Santi's signature dishes. 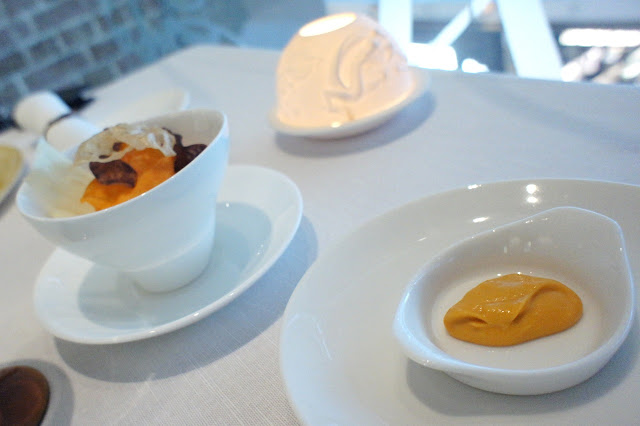 We started out with an amuse bouche of cold artichoke soup with sea urchin (uni), which was a refreshing and elegant start to the meal. The first course was the oyster escabeche with clementines, cous cous and cauliflower puree. This was very well put together; the oyster was very fresh and was complemented very nicely by the cous cous. 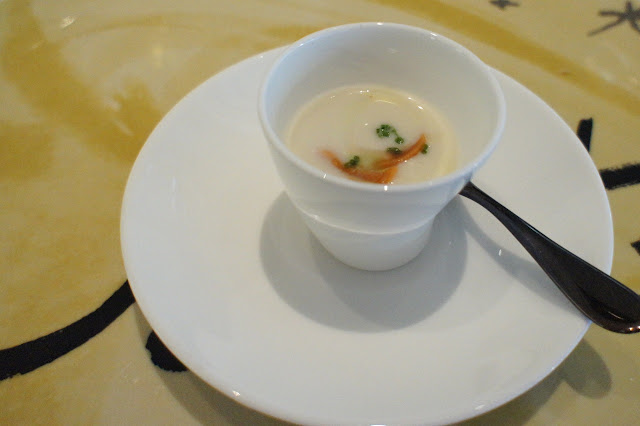 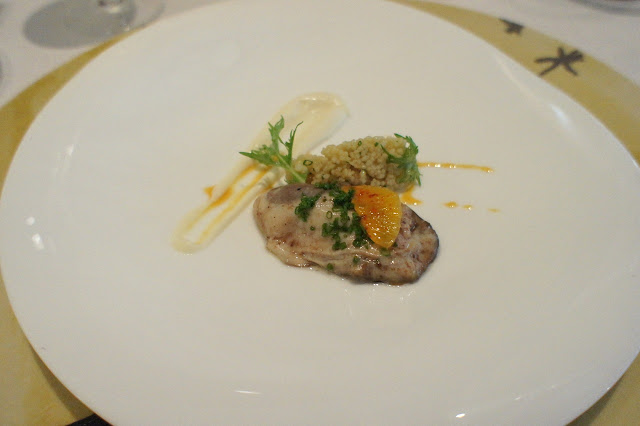 The next dish was the best of the lot: the surprise truffles "Santi Santamaria" style, which was, needless to say, Santi's signature dish. This was foie gras au torchon covered with black truffles and accompanied with a crunchy leaf and chopped radish. The foie gras/black truffle combination was simply divine. 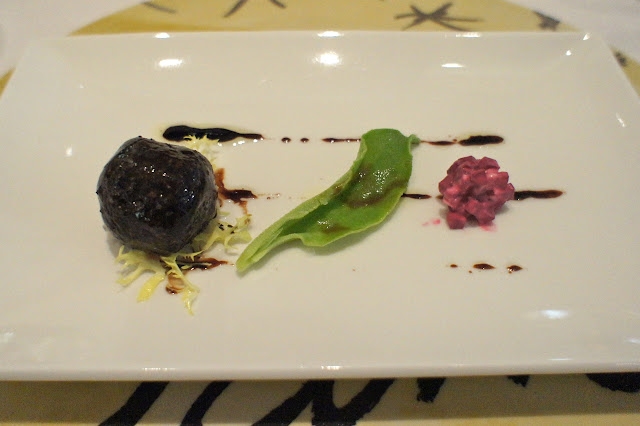 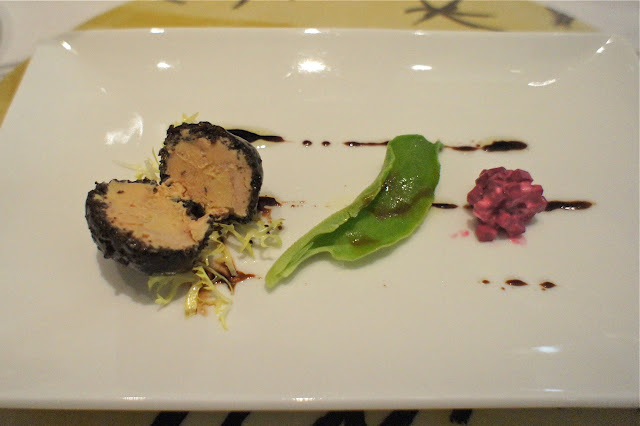 This was followed by the chestnut cream soup with crustaceans and iberic lomo, which was also excellent. I felt that the alaskan king crab, on its own, was a tad bit salty, but this was balanced out nicely by the sweetness of the chestnuts (hence it could have been deliberate on the part of the chef to accentuate these flavours). 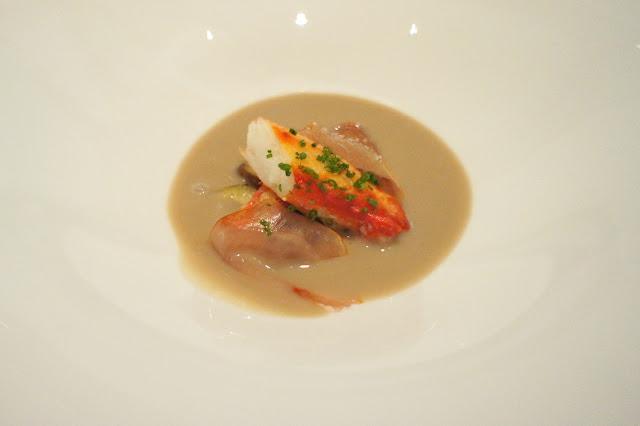 Of all the courses, the seasonal mushroom cocotte with swiss chard and truffle butter was the least impressive (that's not to say that it wasn't good). They were generous with the black truffles and the mushrooms were delicious, but we had to drink the accompanying chicken consomme then eat the earthy and savoury mushrooms; this course was just a bit too rich for us and I felt like I was going to get a nosebleed after eating it. 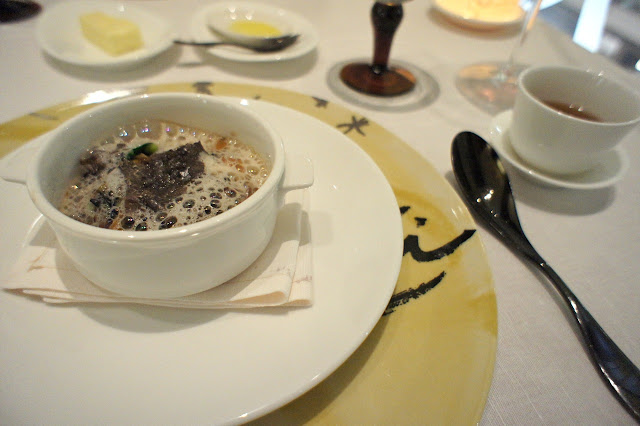 The seabreem and bamboo clam with artichokes, japanese pumpkin and spiced sauce was next and it was very good. The bamboo clam was grilled to give it a slight burnt flavour and the fish was fried to perfection. That said, they gave us a fish knife for this course and it was a bit problematic using that to cut the bamboo clam (one small hiccup with the tableware setting). 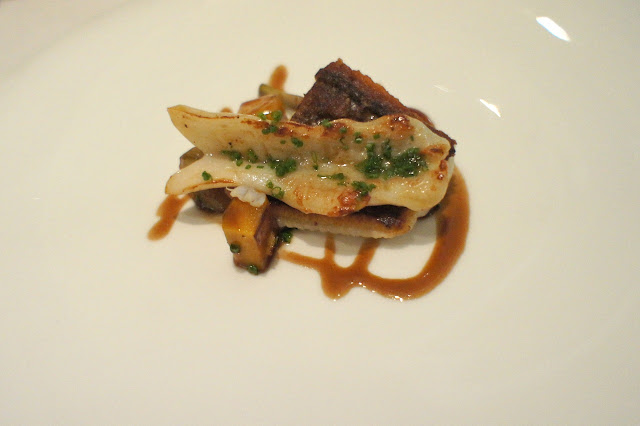 The final main course was the suckling pig with roasted quince and crosnes. The pig was slow cooked for more than 10 hours, which ensured that the skin was very think and crispy while the meat was succulent and tender. The slow cooking resulted in the flavour of the fat being absorbed fully in the meat, which my wife felt tasted a quite 'porky' (I think she meant 'tasted like pork fat'). Nonetheless this was an excellent dish. For this course, the restaurant had another tableware faux pas: our knife and fork were placed wrongly (it was a left-hander's placement with the knife on the left). 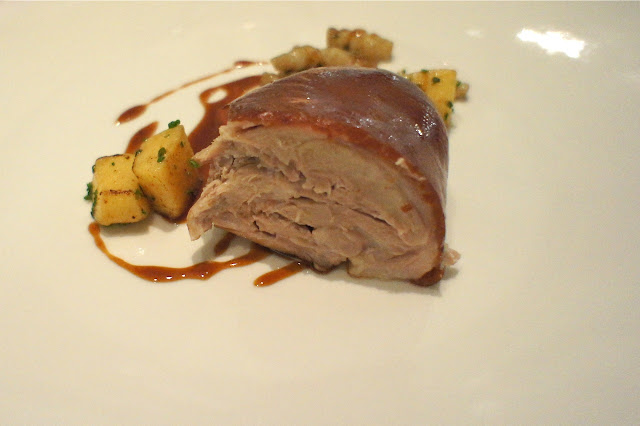 We were very impressed with the cheese trolley, and with the recommendation of the very friendly waiter, we opted for a selection of the usual french cheeses and some spanish cheeses. For me, the ones which really made an impression were the three spanish blue cheeses (picture below - the three on the left). They were really pungent but that was tempered by the port which was used to 'marinate' the cheese, giving it a sweet aftertaste. 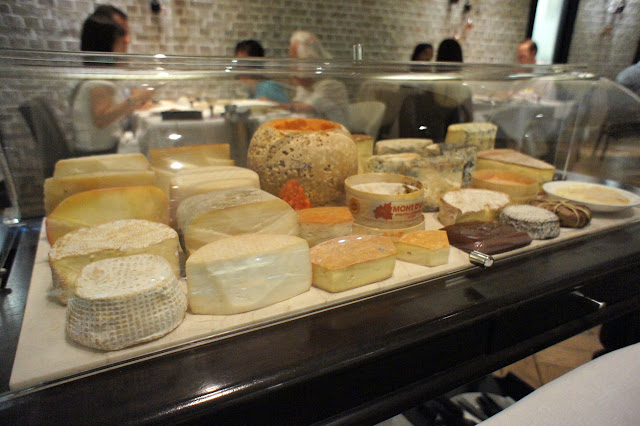 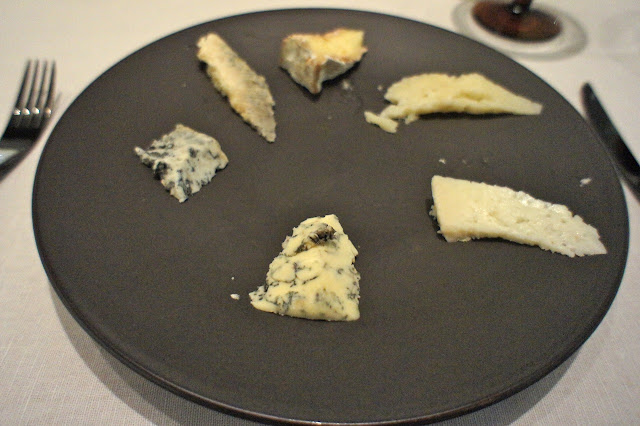 Pre-dessert was the lychee sorbet on cherry and port reduction, which was light and refreshing after the strong cheeses. For my dessert, I opted for the passion fruit pavlova which was very well made (though I felt that it came out a bit warm and would be nicer slightly chilled). My wife had the chocolate bunyols which were essentially donut buns filled with molten Godiva chocolate and armagnac. Both desserts were very good. 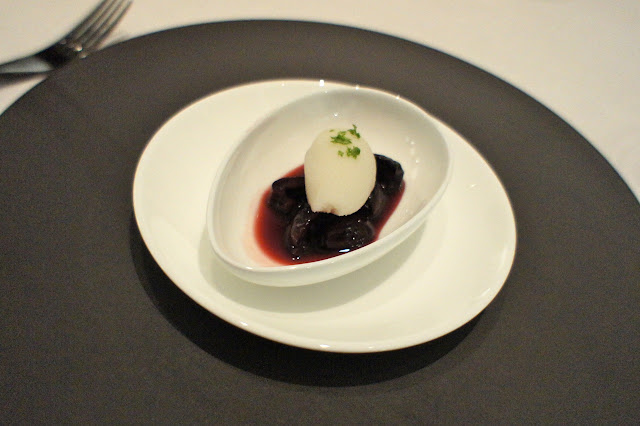 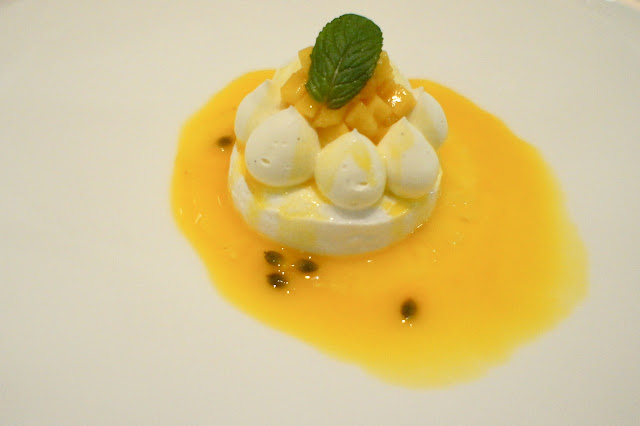 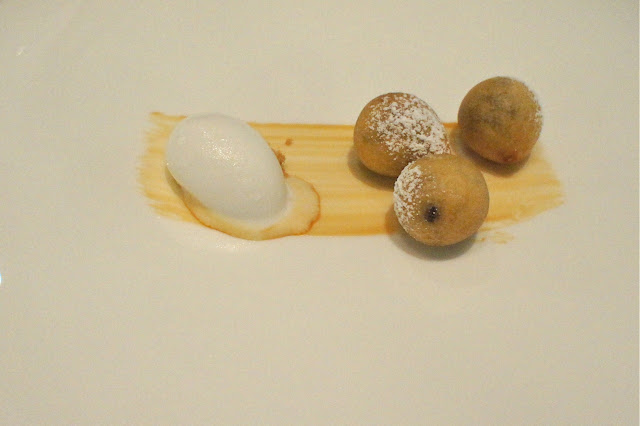 After dinner, we were presented with a box each of petit four, which we could eat there or take home. It was a nice touch and a good end to an excellent meal. Service standards were very high, and there was a staff member who was constantly overlooking the rest of the staff to ensure that they did things right. 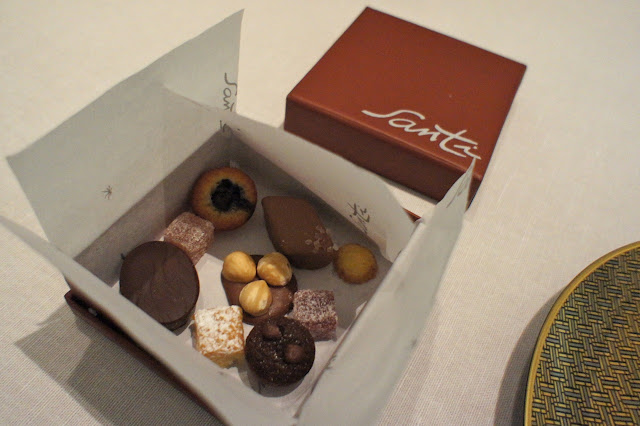 Food: Excellent, the bar has been raised for the fine dining scene in Singapore
Wines: Wine list was decent but prices were on the high side (though not exorbitant). It would have been good if the list included more reasonably priced wines for those not to keen to spend $500 or more on a good bottle of claret
Ambience: Feels quite casual and relaxed, chairs were not very comfortable
Service: Very good, in line with expectations for a restaurant of this standing