Villa D'Amelia is an 'expected' 1-Michelin star (which the Michelin guide classifies as a restaurant which is expected to get 1 star the following year, a kind of probationary star) Italian restaurant in the hamlet of Benevello in the hills of Piedmont, a half-an-hour's drive from Alba town centre. The restaurant is part of the Villa D'Amelia, a boutique resort where we were staying. This was our second time staying at this resort and we love it here, as in addition to its modern amenities (wifi, nice rooms, stylish lobby etc.), the location is quite central to explore the Alba region and it's got great views, plus now we know that it's got a great restaurant. 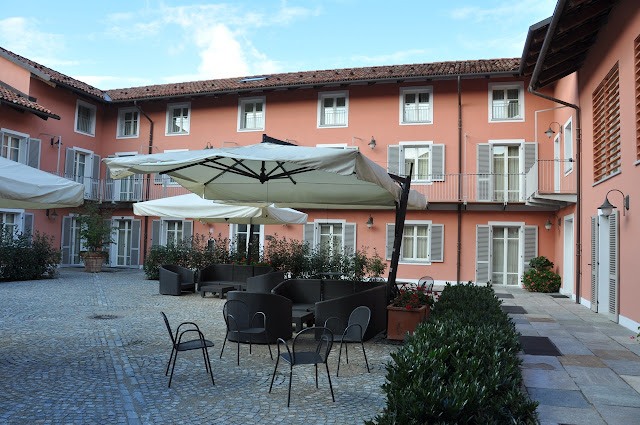 We had just arrived from Bologna after a tiring 4-hour drive and was fortunate to catch the restaurant still open (we had a reservation but was previously informed that we had to get there sometime before 2pm when the kitchen would close). Restaurants in the hills of Piedmont are typically quite quiet during a weekday lunch (especially during the off-season), and there were only 2 tables (including ours) during lunch this time. 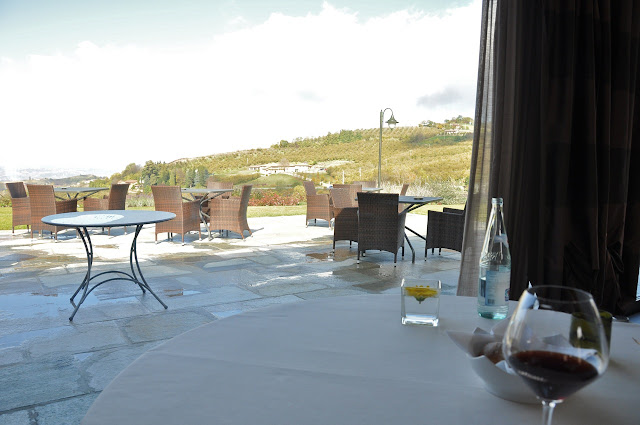 We were seated at a table overlooking the vista of mountains in the distance and the hamlets in the valleys below us. It was a little misty that day but the view was nonetheless quite beautiful. We chose a bottle of 1998 Francesco Rinaldi Barolo which was good for it's price, and ordered a light lunch from the ala carte menu. 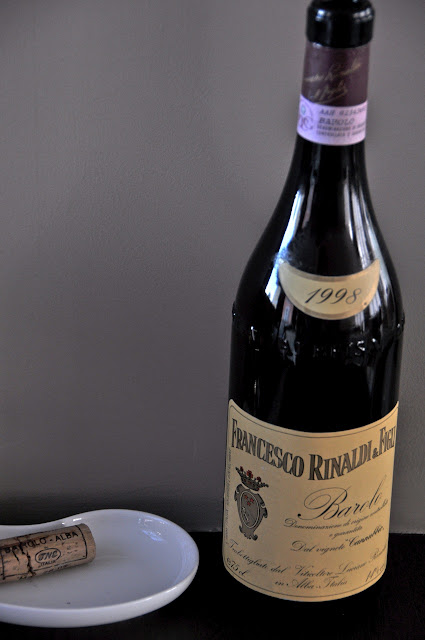 We started with a dish of vitello tonnato (which is apparently a favourite in Piedmont as it was present in almost every menu we have seen in this region). It was very good. We ordered one portion to share but they ended up giving us a large portion each. It was simple yet wonderful. 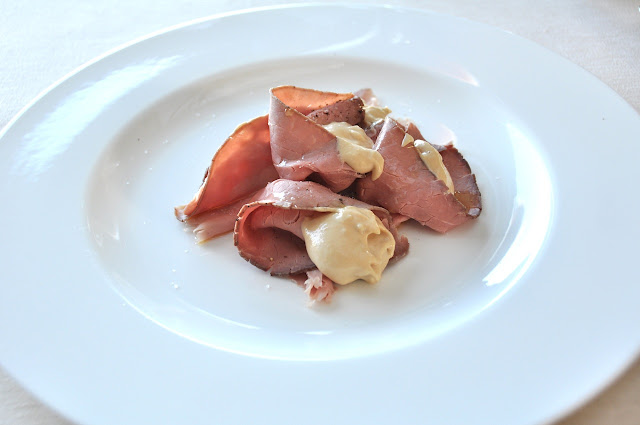 For the mains, I had a tajarin with white truffles; I had about 11 grams of white truffles for this dish and the truffles were very reasonably priced. For a dish like that, it's all about the truffles and there's nothing much else to say about it, other than the fact that it was a real treat. 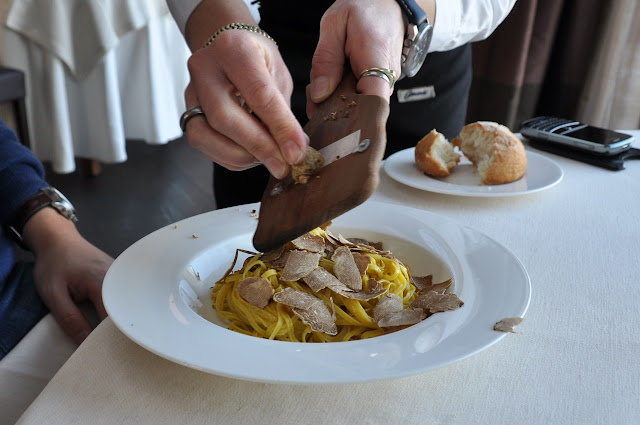 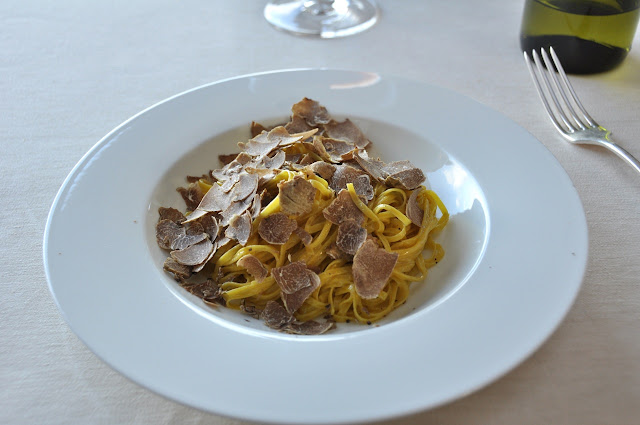 My wife ordered the agnolotti plin which was stuffed with veal, rabbit and pork. She absolutely loved it. Also a Piedmont favourite, it was delicious, although we would to find ourselves eating this almost every day we were in Piedmont. 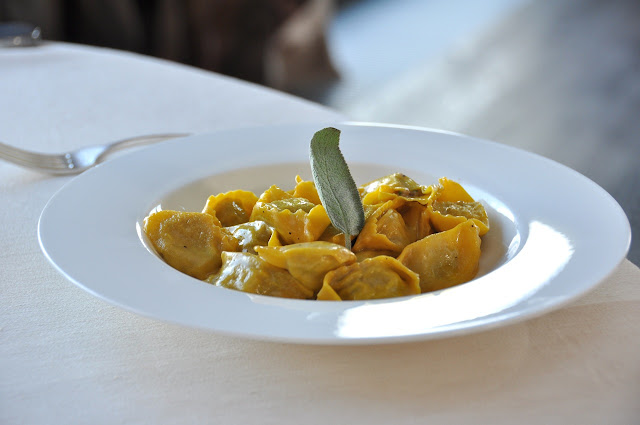 For dessert, my wife had the amaretto pudding which tasted lighter than it looked, and I had the caramel panna cotta which was also very delicious. We ended a very satisfying lunch with espresso. Given the very nice setting and views, with good food and a good wine list, we'd look forward to having dinner the next time we stay at this resort. 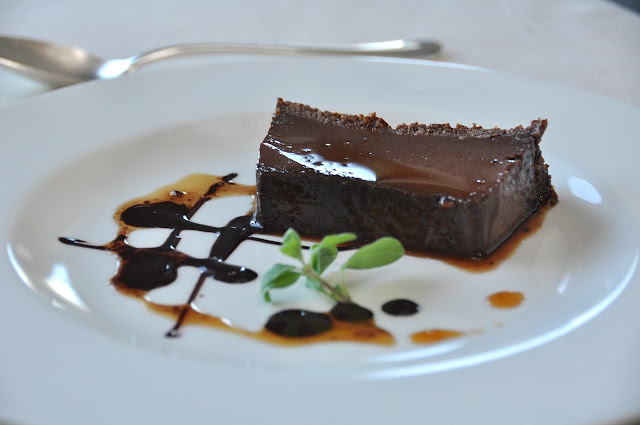 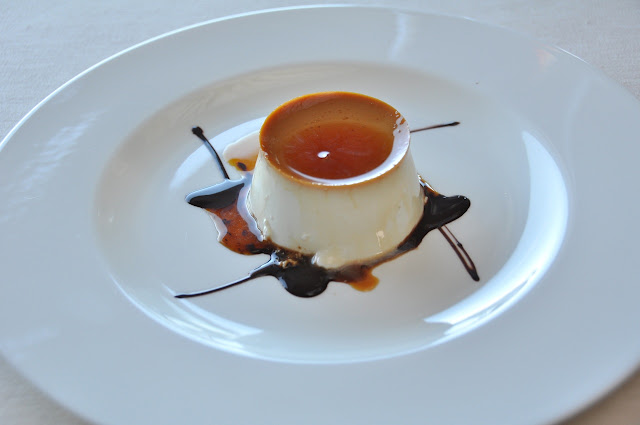 Food: Very competent, especially the plin which was very good. The menu was also reasonably priced
Wines: Decent wine list which was decently priced and had a good range of Piedmontese wines
Ambience: Lovely views, especially during lunch in daylight
Service: There was only one waitress during lunch but she was most friendly and helpful