La Calandre is a 3-Michelin star Italian restaurant in an affluent suburb 15 minutes outside Padova, Italy. It takes up an entire building which comprises 2 restaurants (the formal one, La Calandre, and the bistro, Il Calandrino) and a 3-star hotel (Il Maccaroni), as well as a grocer across the road. The area is not exactly charming Italian country as we have come to get used to, instead, La Calandre is situated in a commercial/industrial district, where it is more common to find warehouses, wholesalers, car showrooms and mechanics' workshops rather than a fine dining establishment. 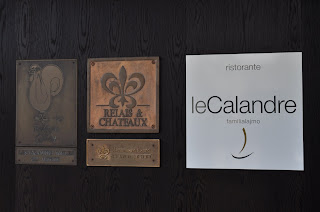 The Alajmo brothers behind the restaurant take their food very seriously. In addition to their 3-star flagship, they also have a bistro (Il Calandrino) which is a modern trattoria and espresso bar, and a gourmet shop which sells fresh ingredients, wines, dried pasta and sauces. To make it easier for their guests who come from far to eat at their restaurants, they also run a simple hotel (Il Maccaroni) next door which is functional, clean and comfortable. Art and design form a large part of the family's philosophy. The chef, Massimiliano Alajmo, is also an artist and painter, and has expressed his creativity with the brush on the walls of his restaurant (though we're glad that he stuck to cooking as his principal profession). The dining room is modern and sleek, with pinewood tables which are uncovered (messes with our photography as the wood reflects light), in a minimalist style. The tableware such as the drinking glasses are also conversation pieces (forgot to ask if the glassware was done inhouse as well). They even have their own cookbook, which apparently won the award as the best cookbook around, and which they managed to convince me to buy (despite it also being the most expensive cookbook I've ever come across).

The dining room was run by one of the brothers, Raffaele, and his staff were all very professional yet approachable. After we were seated, the chef, Massimiliano, came out to greet us and speak to us briefly. We like it when chefs at these restaurants do that, because firstly, it shows an effort on their part to connect with their guests, and secondly, it assures us that the chef is indeed in the kitchen (so that it's not one of those nights when the chef is out and the kitchen puts up a less than stellar effort).

We started with some bread and cheese pastries with some prosecco, while we chose our wine. The sommelier was very helpful and knowledgeable and after discussing with us the kind of wines we liked, strongly recommended a bottle of Barolo Gramolere 2005 from Fratelli Alessandria, which was also the cheapest barolo on the wine list. This was despite us having our eyes on a few of our favourites which cost 2-3 times the bottle he chose for us. This was the one less than perfect thing about our meal here; we expected to drink (and was prepared to splurge on) a nice fancy bottle of barolo, and though the Fratelli Alessandria was a nice barolo and was good value for its price, it was not exactly what we were expecting to have for dinner that night. That said, it's really hard to fault the sommelier who genuinely thought that he was helping us find a good value bottle of wine. On our part, it was difficult to overrule the recommendation of the sommelier as we wouldn't have known if the bottle he chose would indeed be the same or better than the one we were prepared to pay for. You can complain about the sommelier who aggressively upsells you the more expensive wine, but in the opposite scenario (where the sommelier tries to recommend you a good value wine) it's harder to get upset about it. The wine glass we each had was huge though; it was the largest wine glass we had ever drunk out of. 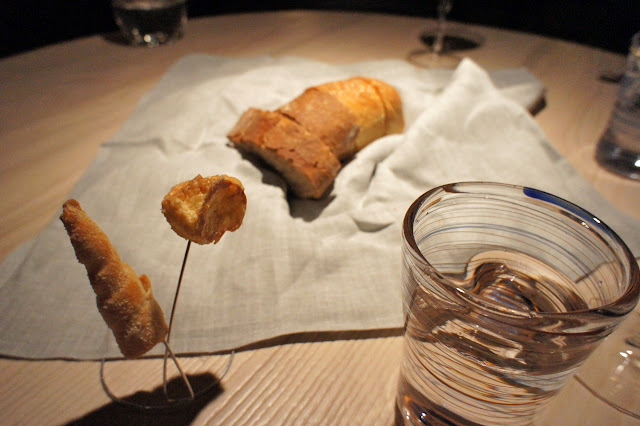 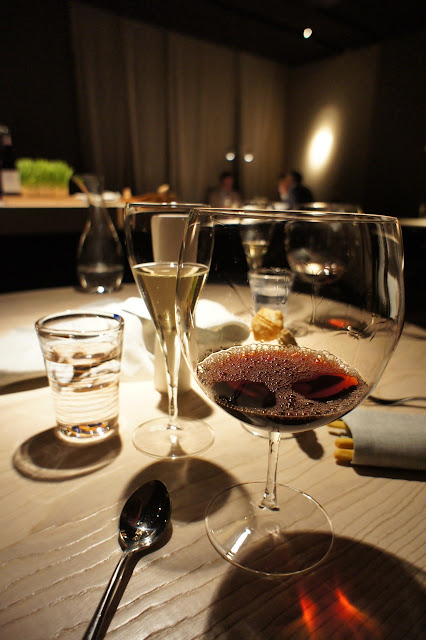 There was a tasty and interesting selection of amuse bouche, among which was the mini pizza which was a small crust pastry with mozzarella and tomato, as well as an egg custard with almond slices in an egg shell. 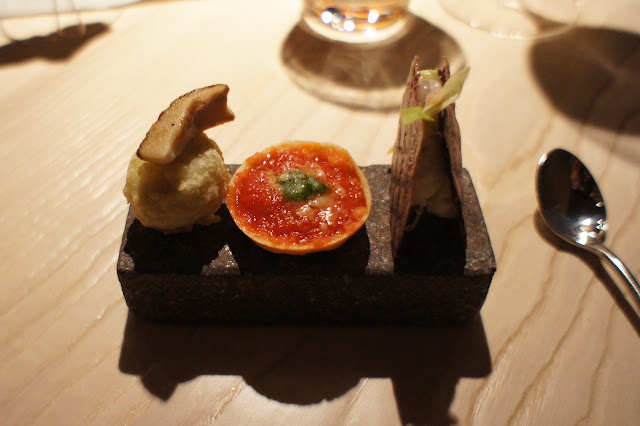 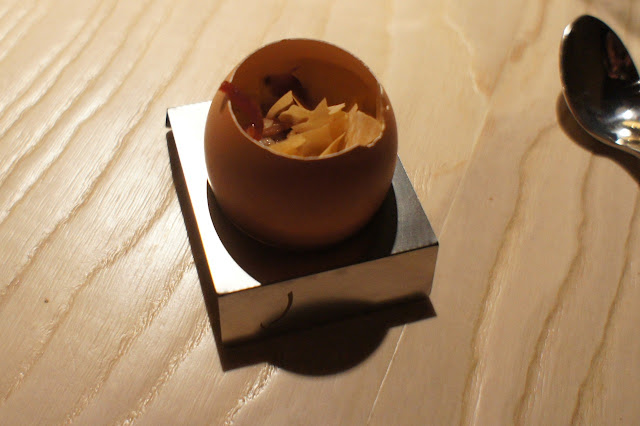 The first course was an excellent roasted shrimp on a bed of fresh milk cheese and beans with radicchio (a kind of vegetable) and apples, followed by the cappuccino of potato cream and squid in black ink, which was very rich and delicious. 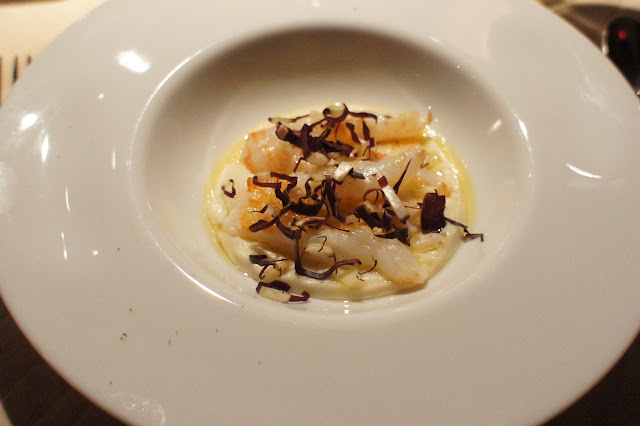 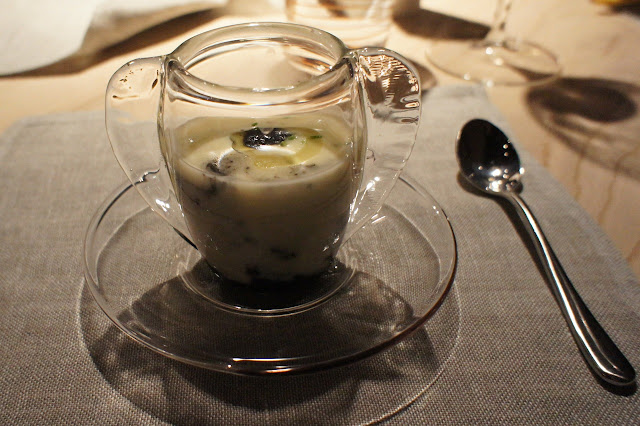 The chef continued with his innovative cuisine with the crispy cannelloni stuffed with ricotta and buffalo mozzarella cheeses with tomato sauce dip, which tasted very light and made us wanting for more. The next dish was off the menu and was supposed to be a palate cleanser (which did not look like it as it appeared to be a full pasta dish). It turned out to be a tortellini stuffed with beetroot juice and accompanied with beetroot foam, and was light and refreshing. 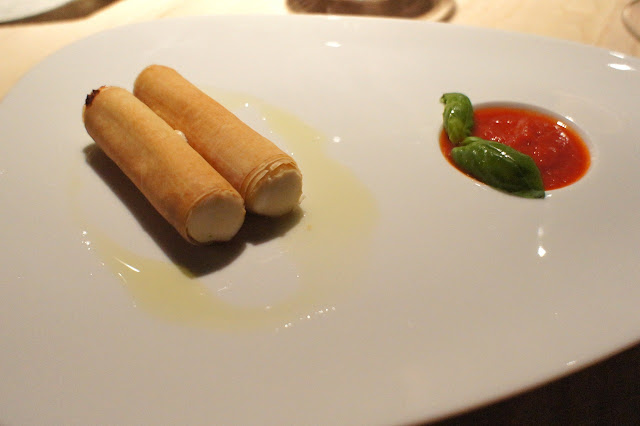 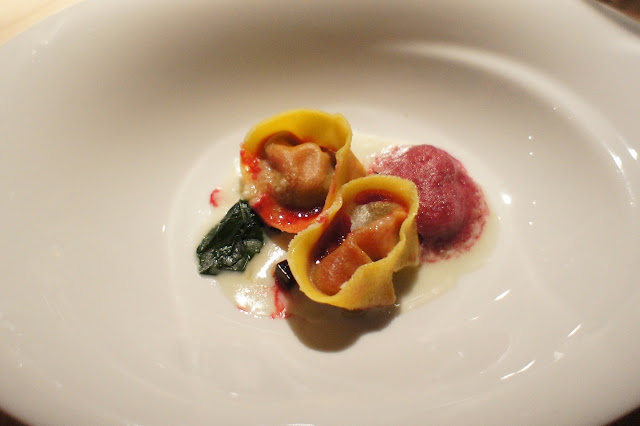 The next dish was quite traditional: the saffron risotto with licorice powder. This was well cooked and very good. My wife, having had the risotto the previous night at Dal Pescatore, asked for a different dish and the chef came up with the ravioli of folded raw fish with mussels and clams sauce, which was very good but rather filling. 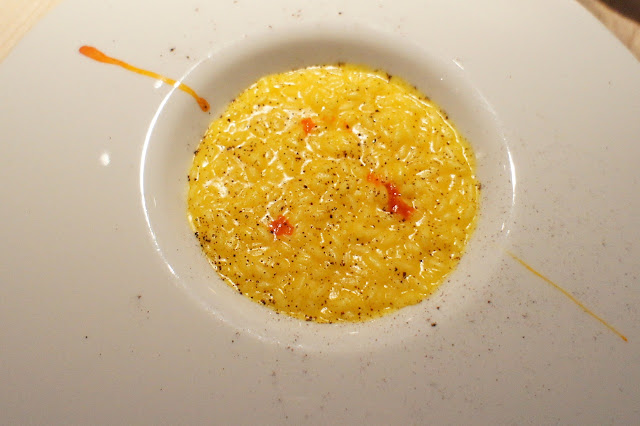 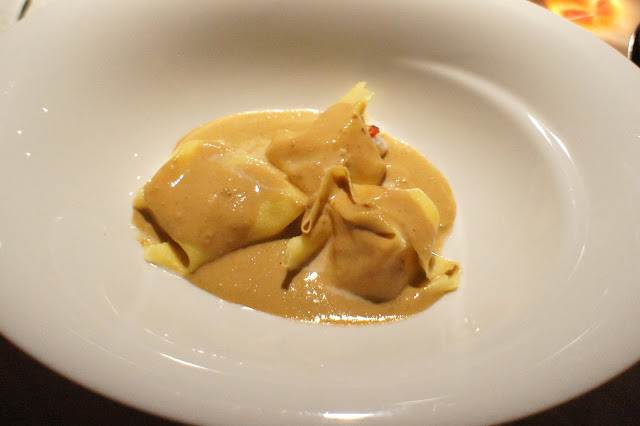 The main meat course was the very impressive raw beef tartare with white truffle; this was meant to be eaten with our fingers and they provided a wet towel to clean our hands after the meal. It was an unexpected but very good dish. 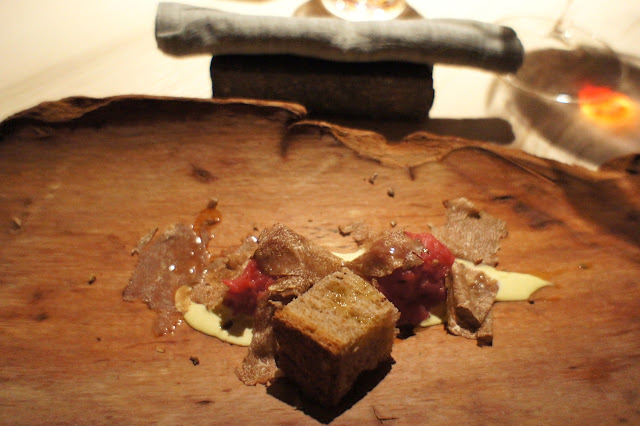 But the highlight of the evening was the final main course, the roast suckling pig with mustard sauce and coffee powder. Previously we had always thought that the Cantonese make the best roast suckling pig, but this really threw that view out of the window. It was a superb effort. The pork was cooked to perfection and the skin was crispy yet not too hard or salty. In addition, the meat under the skin was not fatty but tasted quite lean. The preserved vegetables complemented the saltiness of the pork very well. 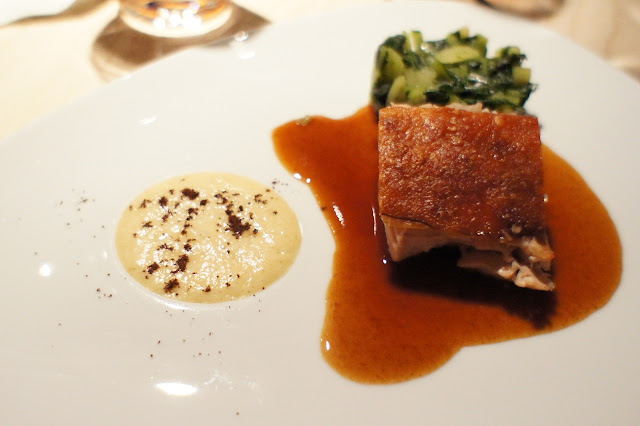 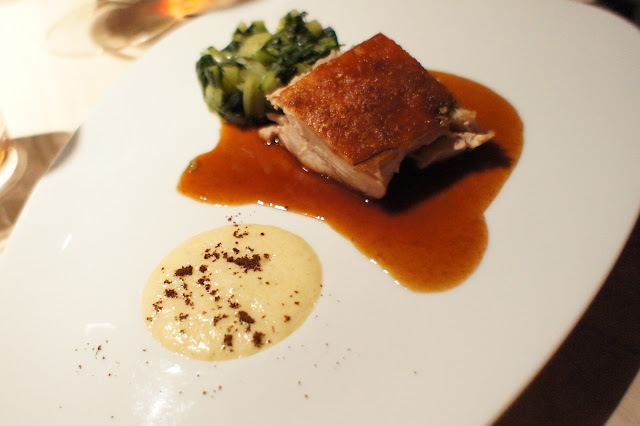 Desserts at La Calandre were taken very seriously, which was great for us as we had started to get used to rather simple desserts at Italian restaurants. Petit four was served on thin skewers, on which were a variety of sweets, grapes and marshmallows, followed by a berry jelly with a gold leaf. 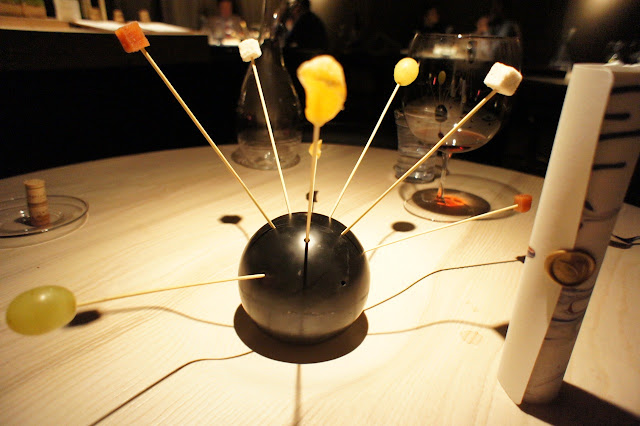 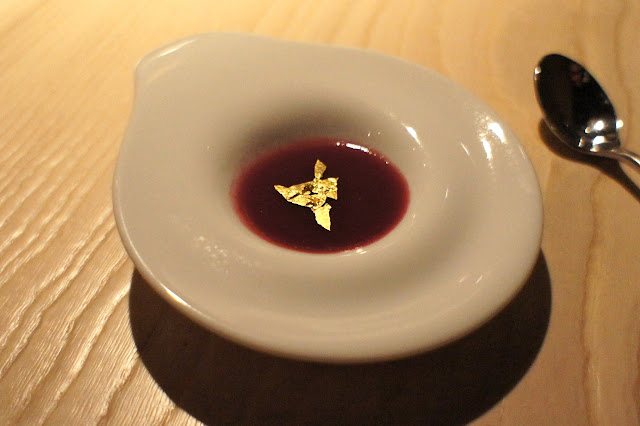 Dessert number one was the minestrone ice cream sorbet with fruits and bergamot, and the second dessert was the millefueille made with olive oil with cream, which was surprisingly light dessert (made without butter) which we were able to finish quite easily despite being very full by that time. We thought that the millefueille dessert was perfect. 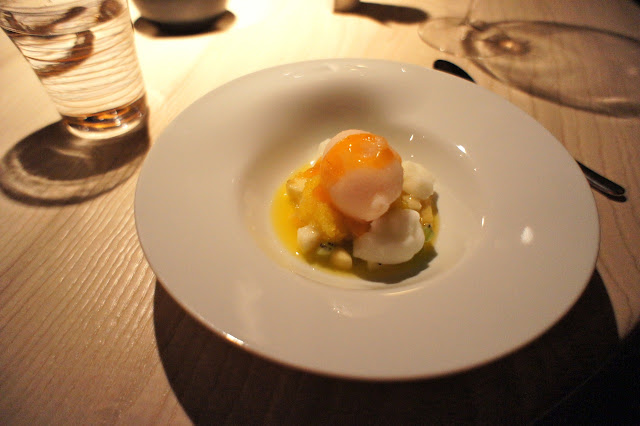 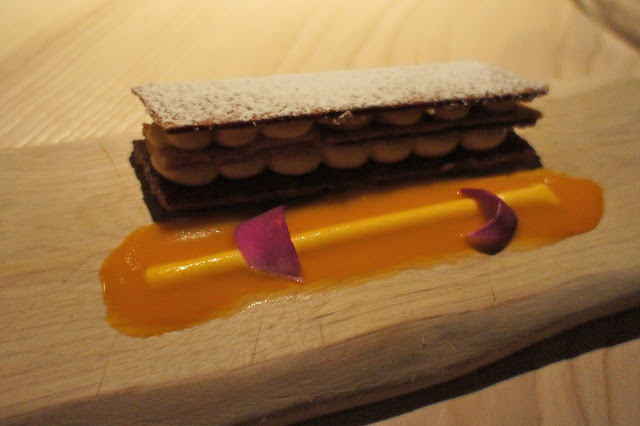 We had tea in a glass which looked like it was made by the chef himself (maybe he made it when he was five). Nonetheless, it was a superb meal which we enjoyed tremendously. The whole experience with the innovative and great food, the modern interior and table setting, and the spotless service, made this truly a meal to remember. 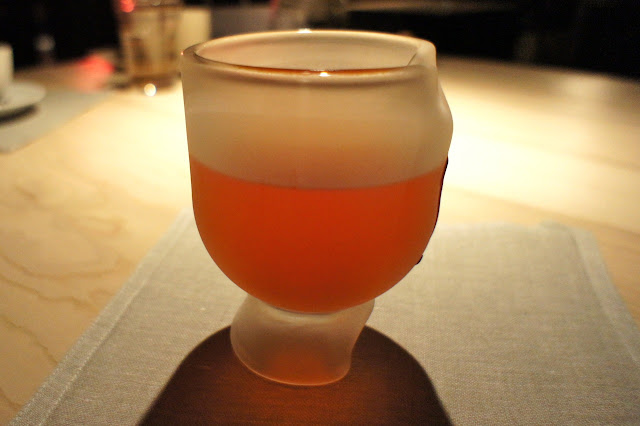 In case one hasn't had enough of Massimiliano's food, one can also have lunch at the bistro, Il Calandrino, which serves salads, pastas and burgers. It is quite a popular and hip lunch joint as there were city folk from the nearby Padova (we can only assume) coming by for their lunch. Some of the city folk came in their Porsches and Aston Martins. 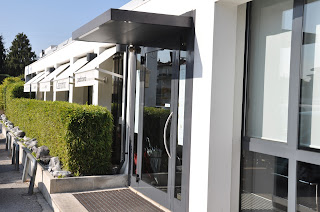 Having nothing else to do in that area, we decided to also have lunch there. We had the lasagna which was a single sheet of pasta over braised rabbit and mozzarella, which was very good, and the Calandre burger, which was also very good and a nice change to the normal Italian food we had been having for a week. 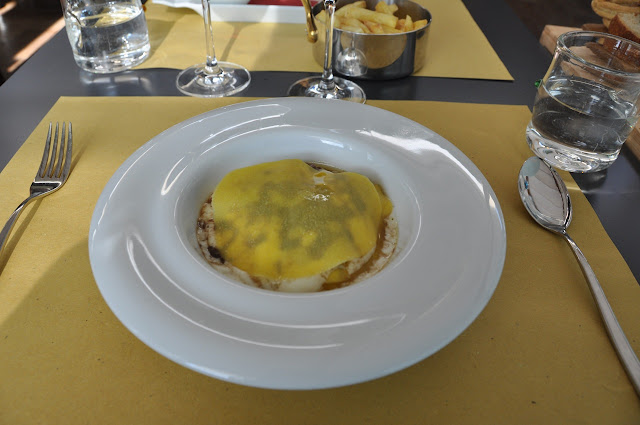 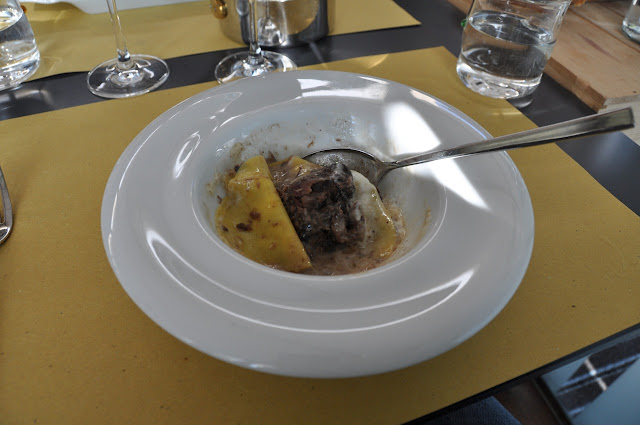 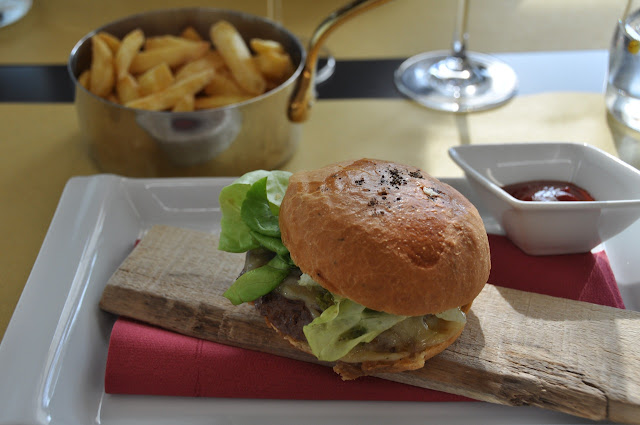 (For La Calandre)
Food: Innovative and excellently executed, a fantastic meal
Wines: A very good wine list, but like Dal Pescatore, certain labels were overpriced. Unfortunately, due to the 'initiative' of the sommelier, we did not have the extraordinary bottle of wine we were expecting to pick at this restaurant
Ambience: Modern dining room which is dimly lit (to ensure privacy) yet each table is individually illuminated, ensuring that you can still see your food well; a very sensible design. There was a sophisticated yet relaxed atmosphere which ensured an enjoyable dinner
Service: Top notch. Every member of the staff was very enthusiastic (the sommelier a bit too much so) and friendly