Tim's Kitchen is a 2-Michelin star Cantonese restaurant in Hong Kong, and it is located in along a narrow street of shophouses with a rather discreet entrance. We were a group of four and were looking forward to dining at this restaurant, after having read reviews and heard from friends how good the food was. In fact, we recently attended a dinner at the China Club in Singapore where Chef Lai Yau Tim of Tim's was the guest chef, and were very impressed with his cuisine (especially his crab claw with winter melon).

Many of the dishes at Tim's require pre-ordering and we had diligently spoken with the restaurant a week before we got there for recommendations and to place our orders. After we had taken our seats, we were served with an 'amuse bouche' of century egg with sugar, which is an acquired taste and not for everyone due to the pungent flavour of the egg.

The dishes then came thick and fast, starting with the roast pork which was competently done, though I felt that the crispy skin was a tad bit too salty and hard. Next was the winter melon soup with white cabbage, crab meat and yunnan ham. This was a very good dish as it was light, refreshing and the various tastes mixed well together. 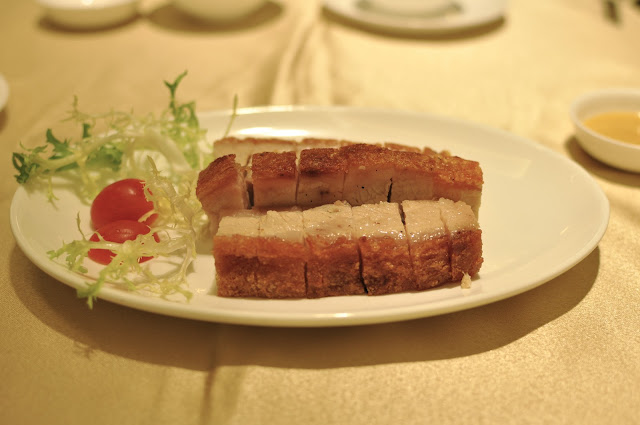 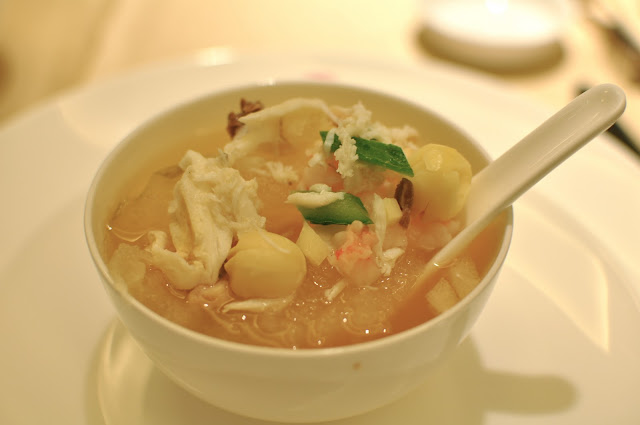 Then came what was supposed to be a real specialty of this restaurant (we have read blogs of people who just cannot stop dreaming of this dish); the shrimp roe with pomelo skin. To us, it tasted like mash potato with sour sauce. Try as I might (I was really wanting to give it the benefit of the doubt), I just could not taste why this dish was so special. Perhaps it was also an acquired taste for which we had not developed yet. This was followed by the crispy roast chicken which, like the roast pork, was good but not extraordinary. 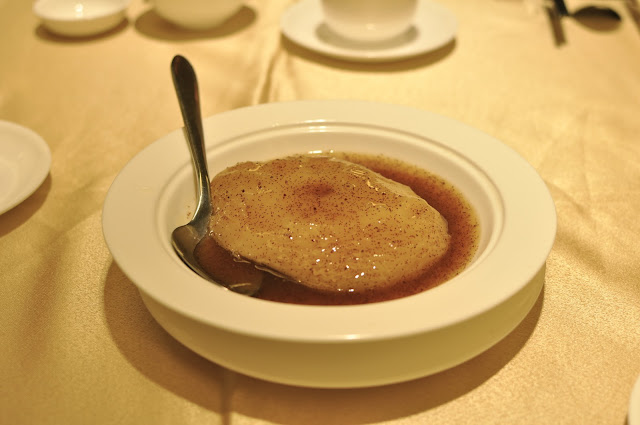 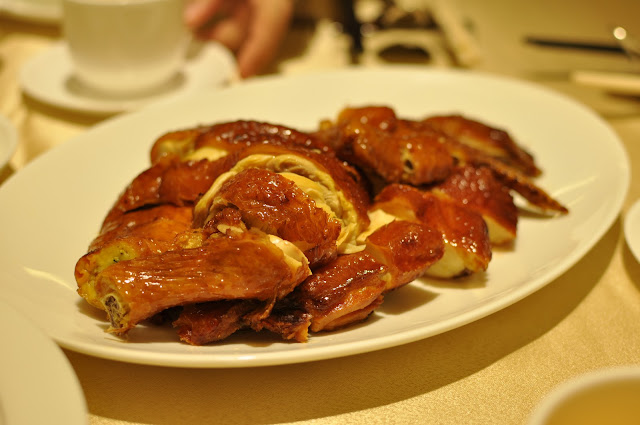 Then came the most pointless dish of all (it was on the list of recommended dishes in the menu); the deep fried tofu. This did not come with any sauce and we had to eat the dry tasteless tofu as it was. Needless to say, we did not finish it. The baked pigeon with preserved vegetables which came next was gamey and dry, it was ok but not extraordinary. 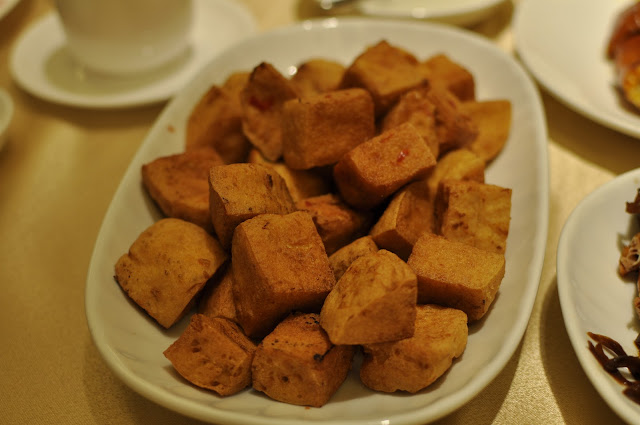 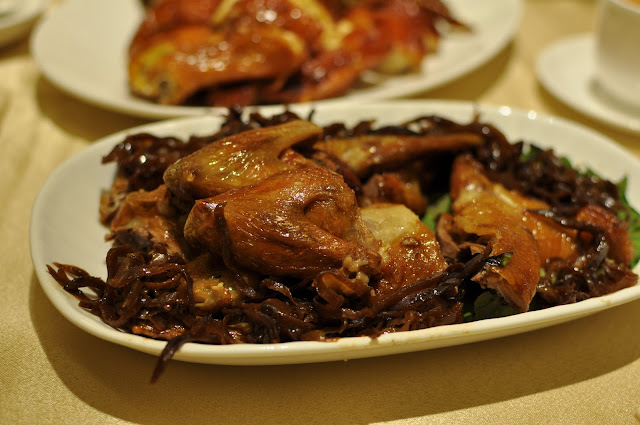 The brinjal with minced meat, though, was quite delicious and this was polished off quite quickly. However, we were brought back down to earth by the quite incomprehensible crispy noodle with creamy garlic sauce with garlic chicken. When it was served to us, it looked like someone had puked on my uncooked instant noodles. It tasted as bad as it looked and we were thoroughly disappointed by it, though I'm quite sure that this was also one of the recommended dishes. 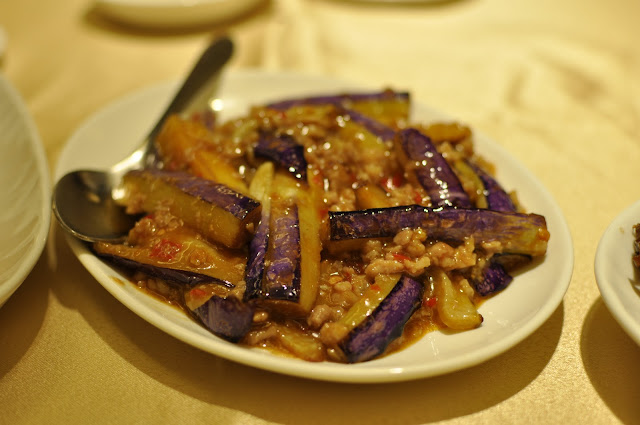 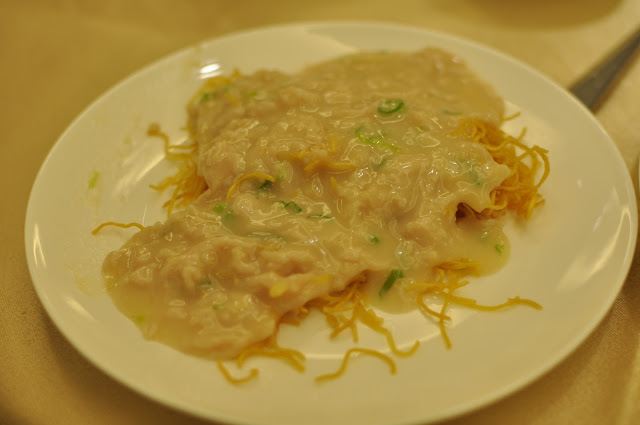 Pre-dessert was a quite tasteless pastry followed by a very ordinary mango pudding. It was not a great end to our meal. 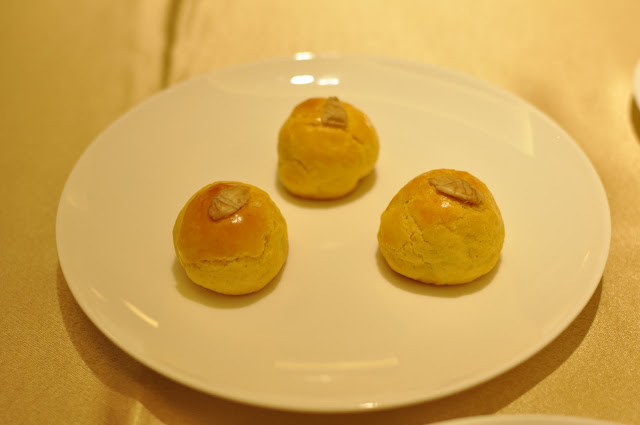 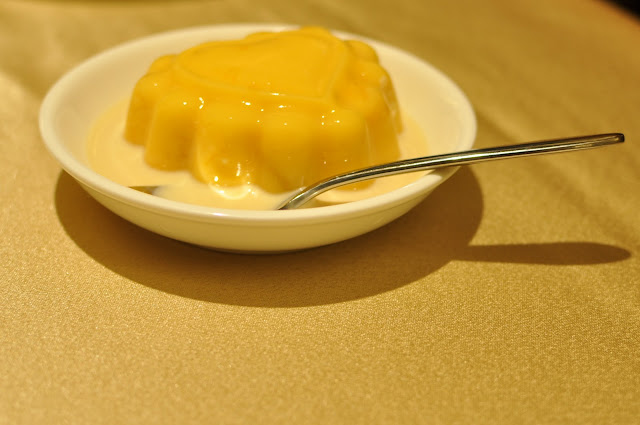 In conclusion, our meal at Tim's was a series of highs and lows; there were genuinely good dishes and rather ordinary (at times poor) ones as well. I remained puzzled as to why I did not have as good a meal as people who I speak to swear I should have had there. Someone suggested that I could have ordered a few more of the specialty dishes (like the crab claw in melon soup; but I tried that in Singapore, excellent though it was, and wanted to try something else). That said, a 2-star restaurant shouldn't stand only on a few selective speciality dishes but should either get all its other dishes up to scratch or just remove them from the menu. Also, I expected much more innovation from the dessert menu.

Overall it wasn't a bad or overly expensive meal but for all the hype, we expected to be 'wowed' by it. Perhaps the chef was not in that day..

Food: Hit and miss, some really good and some rather unimpressive food for a restaurant of such reputation. This is just our opinion only, maybe we just don't get esoteric Cantonese food
Wines: N/A
Ambience: Very pleasant for a Cantonese restaurant (which can be terribly noisy), as the tables were well spaced and there were several private dining areas which kept different groups of diners apart
Service: Very polite and attentive