Guy Savoy is a 3-Michelin star french restaurant in Paris, near the Arc du Triomphe. It is one of the institutions of fine dining in the city and we had to dine at this restaurant while we were here. Guy Savoy recently opened a restaurant in the Marina Bay Sands Integrated Resort in Singapore and we were holding off dining there till we sampled the food at its flagship locale. It also has the reputation of being one of the most expensive restaurants in Paris amongst its peers, but we were warned that in return for that, dinner would be really long and would test the limits of how much one can eat in one sitting (though we would never shirk from such a challenge).

This restaurant is not just about food, there is a strong emphasis on the whole dining experience, which includes the art in the restaurant (many paintings and sculptures - many of them asian or asian-influenced) and the service. There was an army of waiters, each of whom had a specific task; the maitre d' would come over to chat with us and take our orders, the 'wine waiter' (as they call it) would give us advice on the wines, there was a bread waiter who specialised in the bread and could tell you which bread would go with which dish, waiters whose only job was to serve the food and those whose job was to clear the empty plates, etc. The service here was impeccably clockwork. 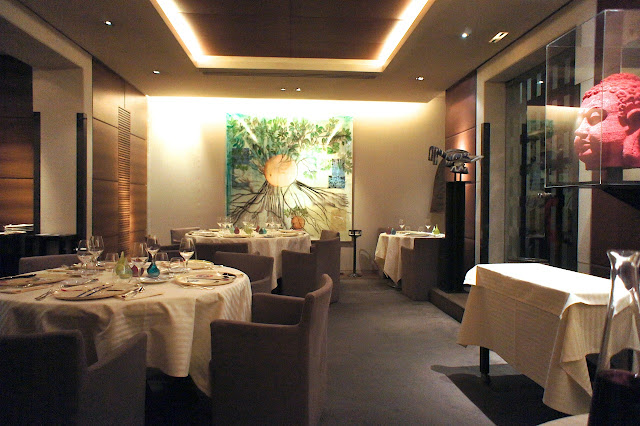 When we were seated, we were given menus which were in several languages; in addition to French and English, there were Chinese, Japanese and Russian translations as well (could have been more but didn't look too closely). Clearly the restaurant gets its fair share of foreign diners. We were also served the house Champagne which was pretty good.

Before long, the bread waiter came around with his bread trolley (they have so much bread they can't just carry the basket around). The bread waiter had so much passion for the bread that we allowed him to finish describing in great detail each and every variety of bread in his basket. 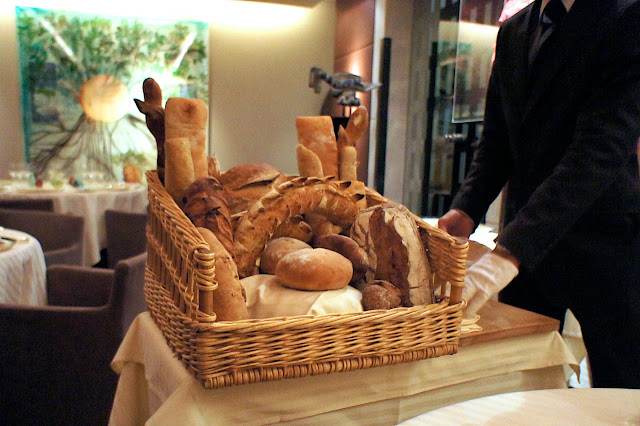 Then we were served some amuse bouche; they were small sandwiches of foie gras between 2 slices of toast skewered on a stick, as well as a pumpkin soup (with a line of pepper on the side which you can push into the soup with your finger) with a small foie gras tart under the reversed cup (picking up the cup to drink the soup reveals the tart below). Unfortunately, I was a bit distracted at that time, as I was speaking to the 'wine waiter' on which bottle of wine to order, hence the amuse bouche was lost on me. In the end, we settled for a 2007 Vosne Romanee from Domaine du Comte Liger-Belair which was delicious despite its youth. 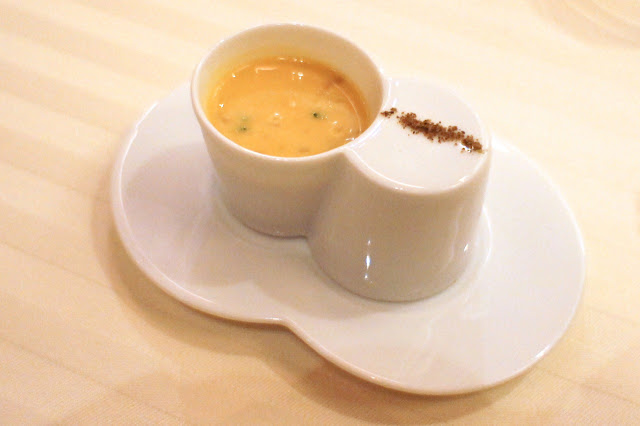 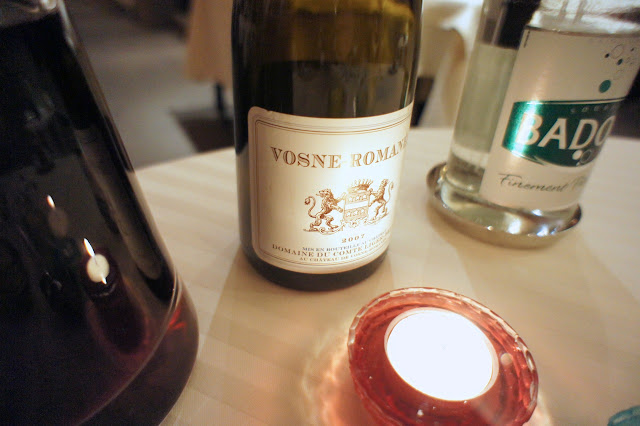 Then off we went on our dinner marathon; we started with the clear ice poached oyster, which was a very luxurious start. 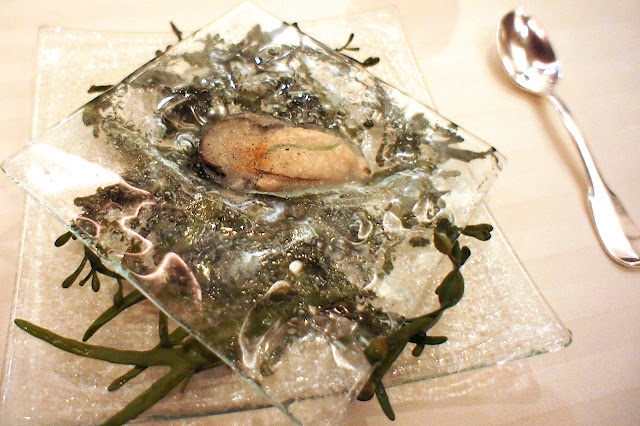 This was followed by the blue lobster 'raw cooked' in cold steam (not sure whether scientifically this is possible - can you cook something with dry ice steam?): this dish was a bit of a show - when served, all you see is a large white plate with mist covering it, after a moment, the mist dissipates and the blue lobster becomes visible (the mist is dry ice evaporating out of the holes in the plate). The lobster was very well prepared and very tasty. 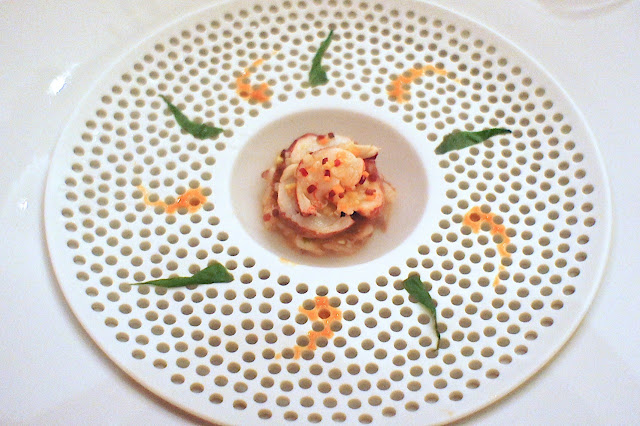 Next was the grilled sea bass with sweet spices, which was very nicely done. The scales were savoury and fried to a crisp, which was a good complement to the tender flesh of the sea bass. 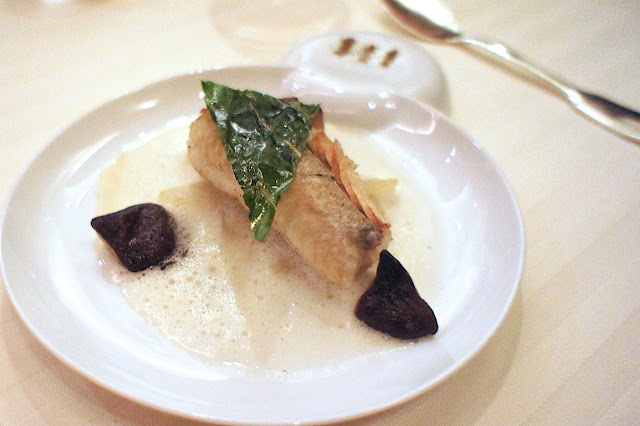 This was followed by the 'colours of caviar', which were four layers of caviar and caviar cream. The chef was very generous with the caviar, however, one of the layers of cream was slightly too sour and this overpowered somewhat the rest of the dish, and hence what would otherwise have been a opulent treat had a muted impact. 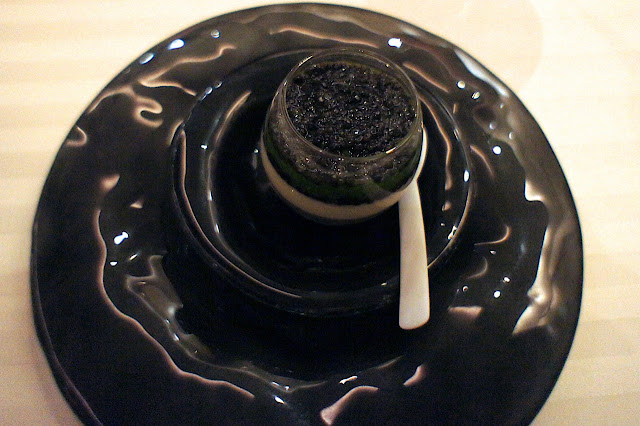 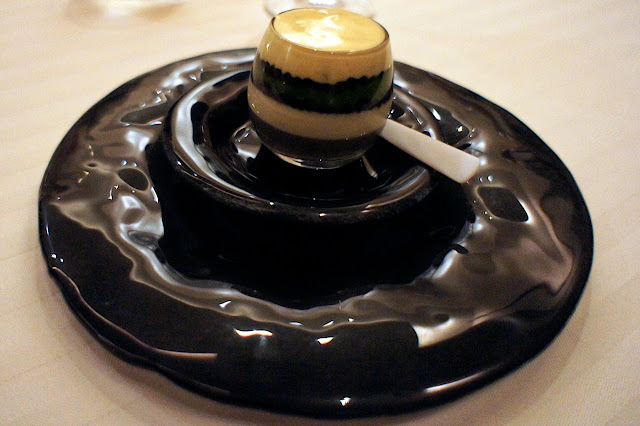 At this point, we were entertained by what was happening at a table next to us; a young french guy was bringing his girlfriend to meet his family for the first time. His girlfriend was not french (but was European nonetheless). It was classic: the mum was trying to be friendly and would ask the girl various questions to keep the conversation going, the dad would just look bored, the girl was trying to look demure and yet engage each member of the guy's family, and the younger sis clearly hated the girl (she was scowling whenever the girl spoke but would fawn over every word her brother spoke). The guy had the hardest task trying to hold it all together, by ordering really nice and expensive wine and constantly filling up his dad's wine glass, hoping to win his approval in that way.

These events helped us get through the next 2 courses which were rather uneventful: sauteed chanterelles with cream broth (which was good but not stunning), and a roasted foie gras in radish sauce. The foie gras was cooked well enough, but the radish sauce was too sour for our liking. 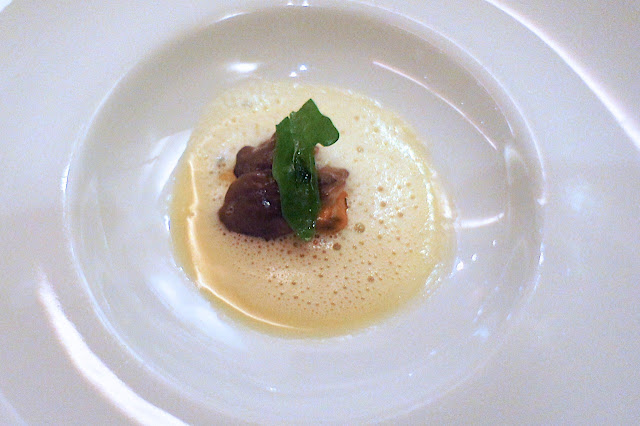 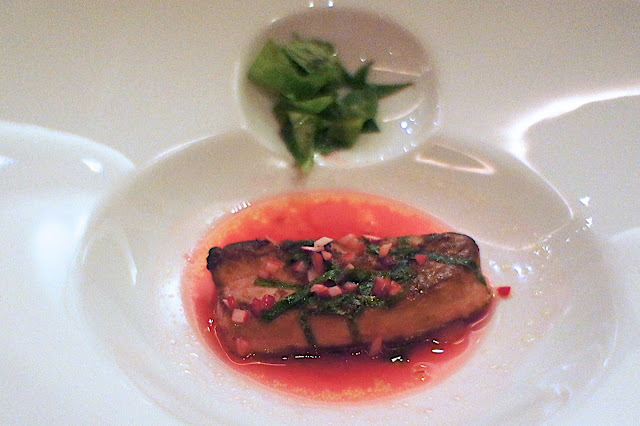 The highlight of the dinner was the much-anticipated artichoke and truffle soup, which we had heard a lot of previously. This was very exquisite, it didn't taste too much like either of artichoke or truffles but was a nice balance between the two. We were previously warned that this could be too heavy (especially given the amount of food we were expected to eat that night) but we found it just right (the waiter buttered a piece of brioche with truffle butter to go with the soup; it may have been too much if we had finished the bread). 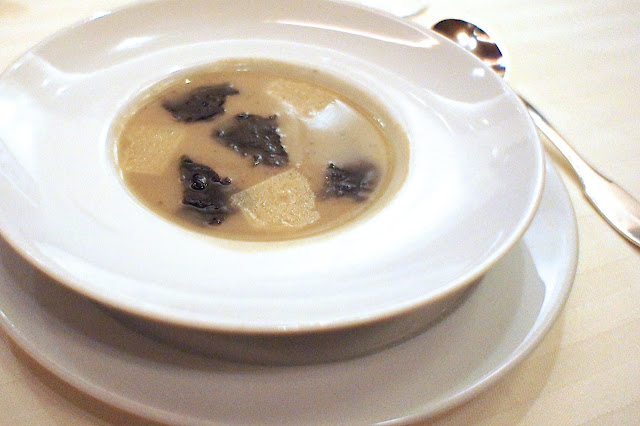 The final main course was the veal prepared in four ways: saddle of lamb stuffed with herbs, lamb chop with potato gratin, mash potato with lamb jus and confit shoulder of lamb with crispy skin in lamb consomme. It was a very good dish, with each portion being of the right size and of varying textures. The lamb dish was accompanied by a sauteed carrot and mushrooms (dish was named 'orange and black' - not much originality there). 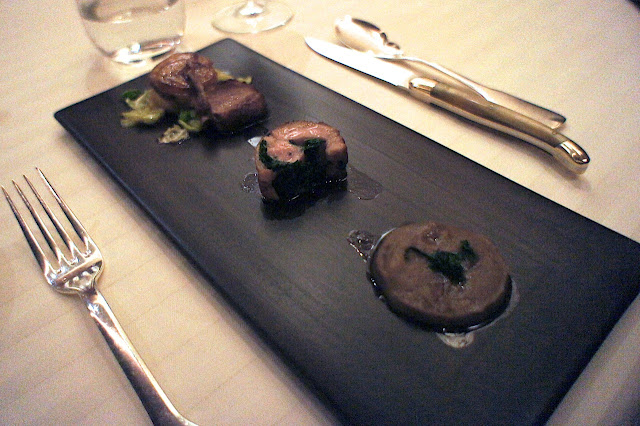 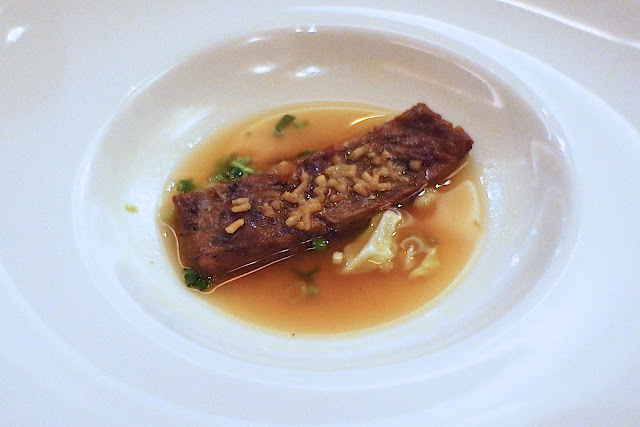 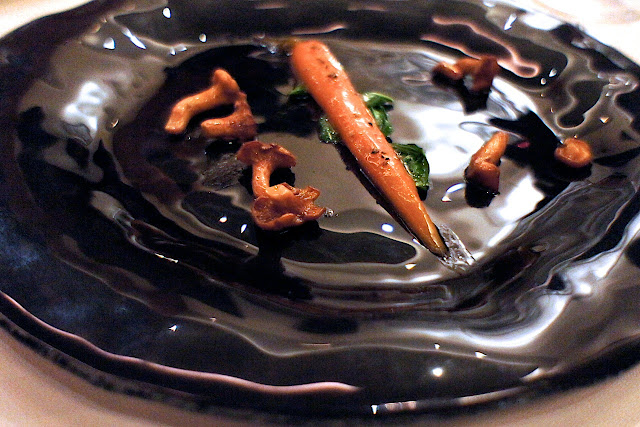 The cheese selection was the most impressive we had come across: 2-tiers of more than a dozen cheeses, with a mix of the cow, goat and sheep cheeses. I settled for a piece of comte and one each of the goat and cow soft cheeses (could have had more but seriously couldn't eat any more at that point in time). 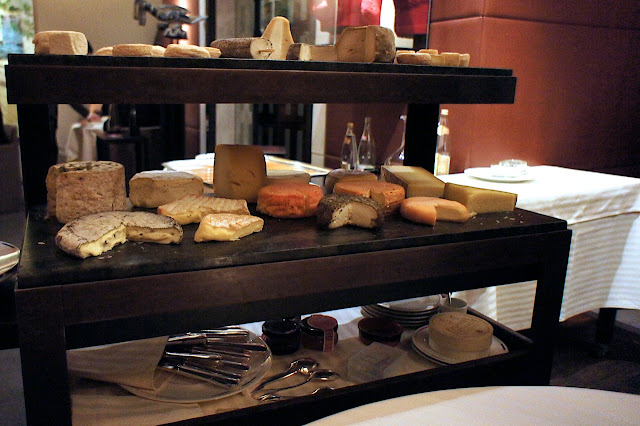 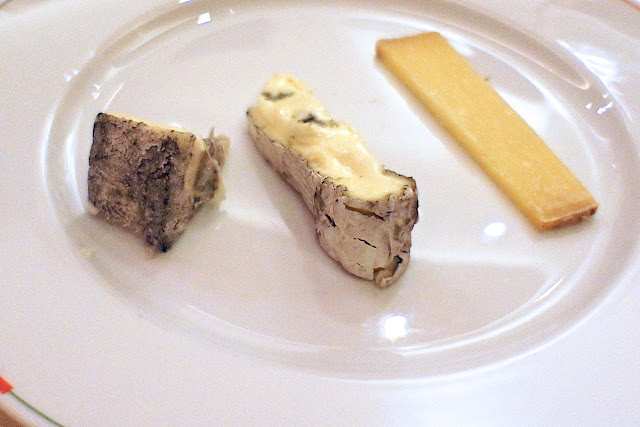 We were given some chocolate lollipops and marshmallow on a spoon as a pre-dessert palate-cleanser. We then requested a rest period for us to catch our breaths after all that food. 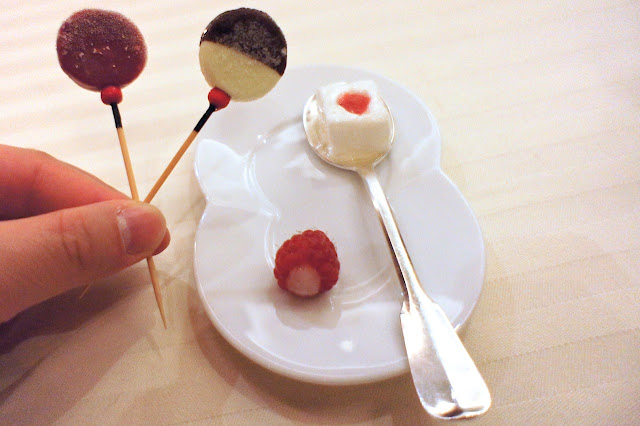 After the 20-minute hiatus, we were served the first dessert of melted chocolate and fruit with petals, and the second dessert which was an ice cream ball encased with a gold shiny sugar coating which melted once the waiter poured the hot molten black chocolate on it. Both desserts were very good. 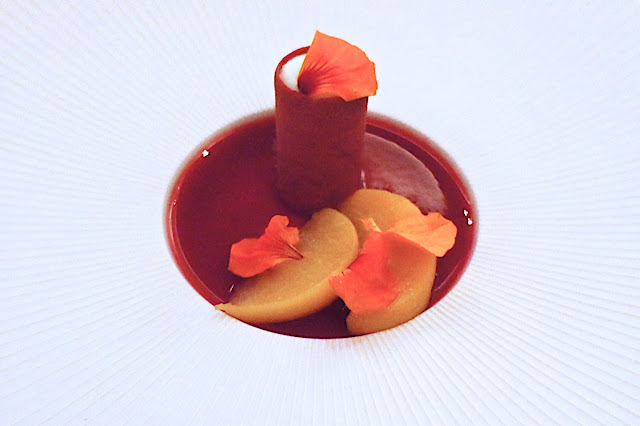 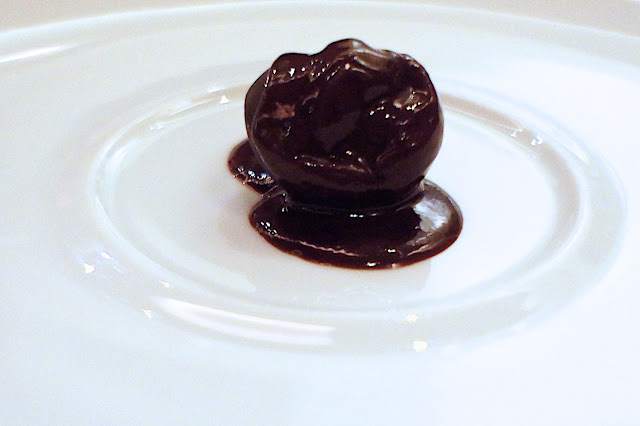 Dinner was rounded off (it was past midnight by now and we were the only ones left in this section of the restaurant) with the trolley which had a selection of tarts, pudding and ice cream, from which we picked out some ice cream and sweets to go with our tea. 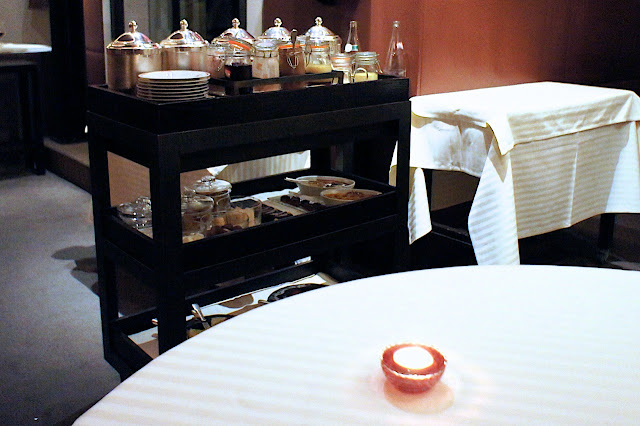 Final Thoughts: In conclusion, it was a very expensive yet very good meal, which was to be expected in one of the bona fide temples of french fine dining. We expected to enjoy the food more though, and the cuisine itself was less mind-blowing than some of the other restaurants in Paris we had dined at. In hindsight, it might have been a better idea to go with the ala carte menu instead. The service was first rate and the wine list and cheese trolley were also excellent.
Posted by Smiling Lion