Astrance is a 3-Michelin star restaurant in the 16th Arrondissement of Paris (just across the Siene from the Eiffel Tower) in a rather dark and quiet small street intersecting with Avenue de New York. It only does 25 covers per night, which makes getting a table there a bit of a challenge. We were fortunate that our concierge at the Le Meurice was able to get us a table there on the day which we wanted (he managed to get all the bookings for our desired restaurants for this trip; admittedly we did ask him 2 months ahead of time). 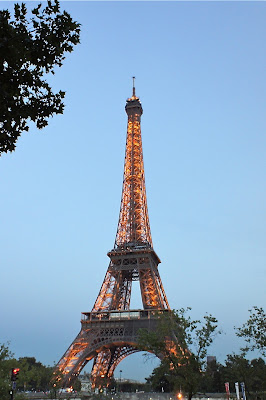 We were really looking forward to this meal, as Astrance had the reputation of being very cutting edge in its cuisine, especially as it does not have a fixed menu for each evening (it has no menu at all, in fact) and the chef will cook whatever he thinks will match your food preferences (they will ask if you have any allergies or dislikes etc) and the wine you ordered, with whatever fresh ingredients he has for the day. 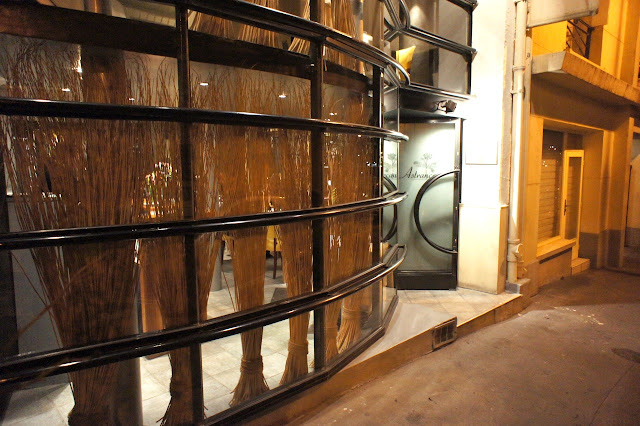 One word on the interior; unlike the grand, classical and sometimes opulent environments of top restaurants in Paris, Astrance is very simple. The tables on the ground floor are well lit but set rather close to each other, whereas the 2 tables they have on the mezzanine level are more private but can be quite dark. There is nothing fancy about the decor or tableware in the restaurant, which raised our expectations that the food must be extraordinary to deserve the accolades it gets.

They have no bar or waiting area, so when we arrived 10 minutes before our 8pm reservation, the restaurant was not yet ready and we were told to come back again in 10 minutes. This was inconvenient as the neighbourhood was really not conducive for standing around; it was poorly lit and there was a big garbage dump just round the corner which we could occasionally smell, while waiting by Avenue de New York waiting for the restaurant to admit us. On a positive note, the Eiffel Tower was just right in front of us across the river and we spent the 10 minutes watching getting lit up (and hence we managed to do one touristy thing in Paris during this trip).

When we went back to the restaurant, they seated us in a quiet corner on the mezzanine level. It was a bit dark and we were next to the glass window overlooking a dumpster on the sidewalk (there was some construction going on for one of the units along the street), however the positives were that our table was private (compared to the tables downstairs which could get quite noisy) and we overlooked most of the downstairs tables so we could see what everyone else was eating. They didn't offer a small chair for my wife's bag though, which we thought was quite standard in such restaurants in Paris.

Instead of the usual bread basket, they presented to us some bite-sized bread drizzled with olive oil. Fortunately, this wasn't a restaurant where they constantly bombard you with bread every 5 minutes, where the waiter looks personally affronted if you don't pick up a piece of bread each time he comes around. 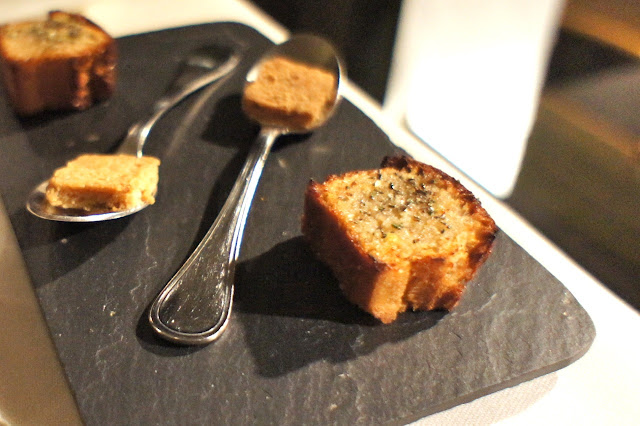 We had some champagne and were served with the amuse bouche which was a very interesting foie gras terrine sandwiched between two pieces of very thin wafer. 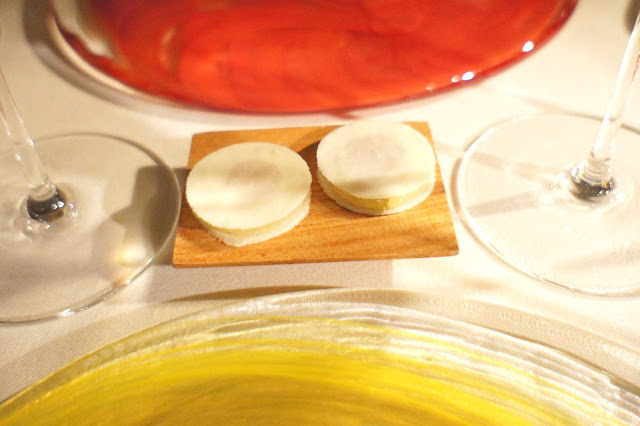 Their first course was a highly intricate mushroom tart, with layers thinly sliced cepes mushroom piled amongst green apple slices, foie gras au torchon, cinnamon powder on top and sweet wafer (the kind of wafer you get with kinder bueno) as the base, and accompanied with a large drop of lemon puree. It was an absolutely stunning dish, both in appearance and in taste. I have some form of mushroom allergy, but all my concerns went out the window and I could not miss having a taste of this (I ate the whole thing, in fact). 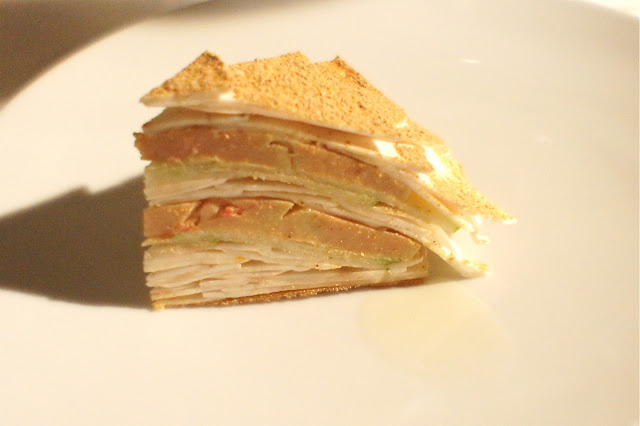 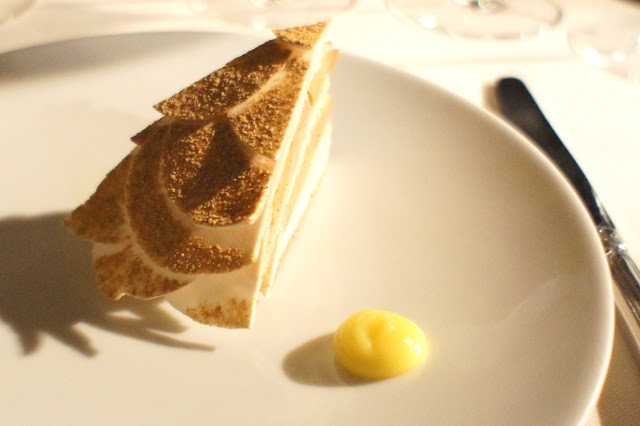 This was followed by a palate cleanser of tomato puree, with a base of goma (Japanese black sesame) pudding and caramel foam. Initially, it tasted quite ordinary (just tomato juice) until we scooped up the goma at the bottom, which made all the difference. 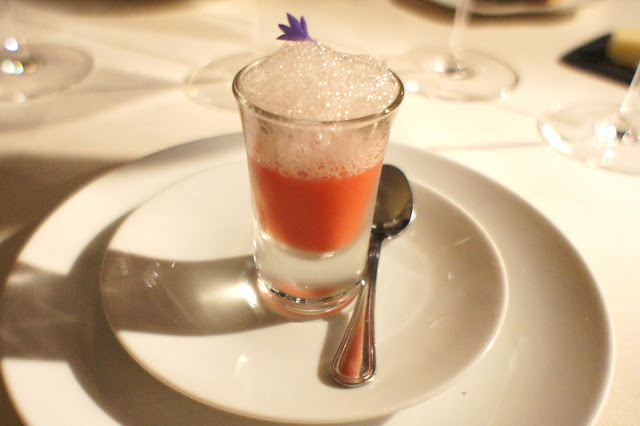 Following the Japanese-inspired theme for the evening, the next was the langoustine in langoustine broth of ginger, garlic and Japanese soya sauce with hints of thai basil. This was another superb dish and we were practically lapping up the consomme from the bowl. 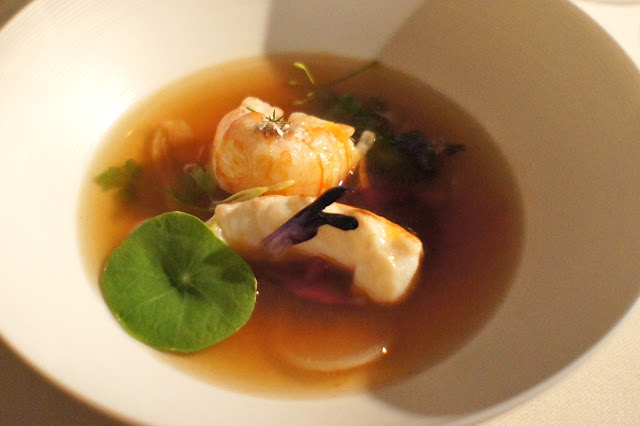 Then came the first of 2 fish dishes. Firstly, we had the sea bass with tamarind puree, lemon sauce and spinach. This was paired with an Gewurztraminer from Alsace (managed to guess this correctly), which was sweet and hence went very well with the sourness of the tamarind and lemon. 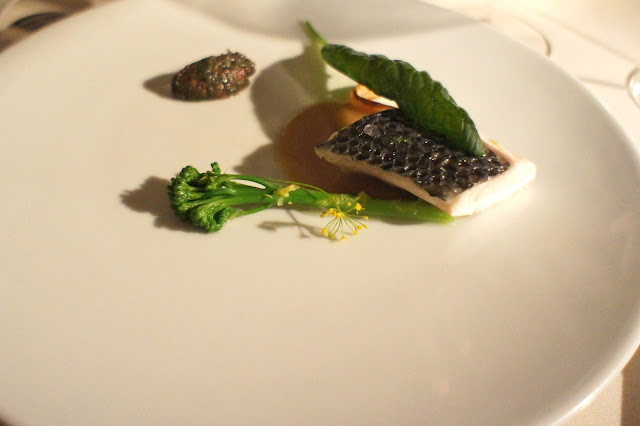 Secondly, the mackerel marinated with miso and topped with buckwheat seeds, sardine and raw leaves which remarkably taste exactly like oyster, accompanied with an anchovy soup (not pictured). The mackerel was cooked in a way which tasted like Japanese Saba, but without being grilled till dry. It had the texture and consistency of being steamed instead. The buckwheat seeds were very interesting; they were crunchy and tasted like roasted peanuts. This was well paired with a white bordeaux from Pessac Leognan - Domaine de Chevalier 98 (did not manage to guess this - who would have thought of a white Bordeaux?). 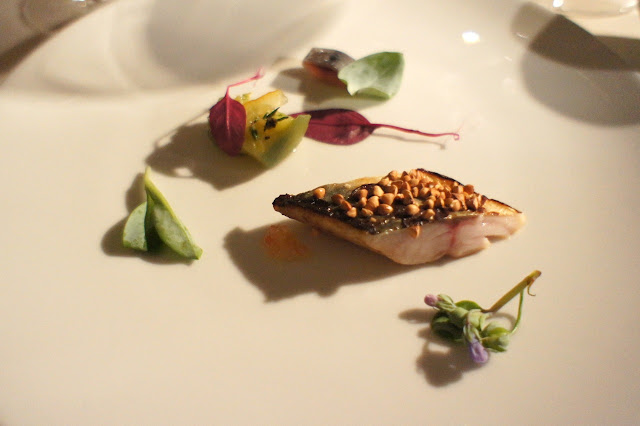 Main course was veal with cepes mushrooms again and parmesan mash potatoes. The veal was very tender but on its own relatively tasteless (the cepes mushrooms did not add to its taste, but instead contributed to the texture of the dish). The veal and mushrooms had to be eaten together with the veal sauce and mash in order for the flavours to be understood. This was paired with a Pouilly Fuisse 2001 Chardonnay, which was an unusual choice given that the white wine was expected to pair with the red meat, but given the relative blandness of the dish, this went quite well. 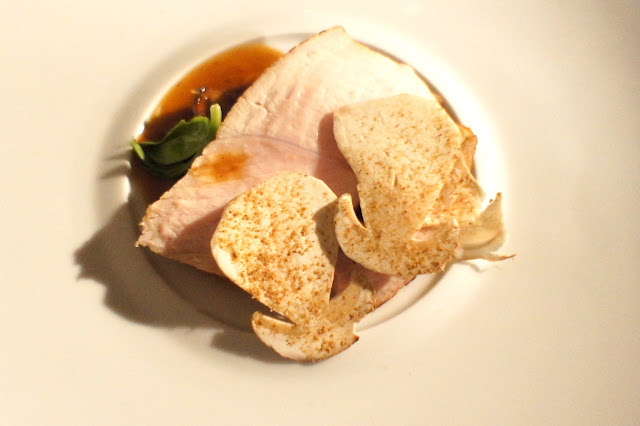 The final main course was the roast pigeon with beet puree and duck liver pate on toast. The bird was nicely cooked and very well marinated, with the meat retaining its juice and remaining very tender. This was paired with the 2006 La Colombiere Vosne Romanee, which was a lovely wine. 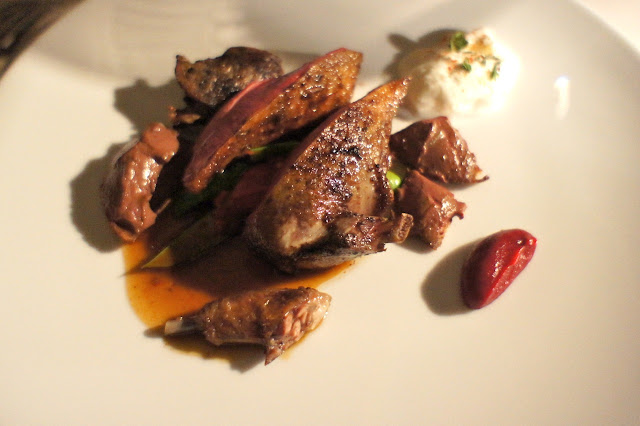 Cheese course was an interesting zucchini flower stuffed with gorgonzola and paired with a 2007 late harvest Languedoc Grenache (no way I would have guessed it). 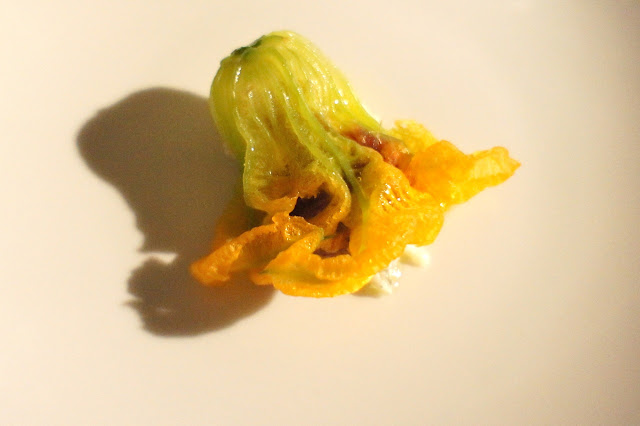 Like all french restaurants in Paris, dessert is an event in itself. There was an assortment of sweets, from the raspberry tart (with perfectly textured raspberry cream/foam), to the almond foam topped with a very thin pastry (this tasted like chinese-style almond cream) to the homemade chocolate ice-cream. Of the three, the almond cream was positively mind-blowing. 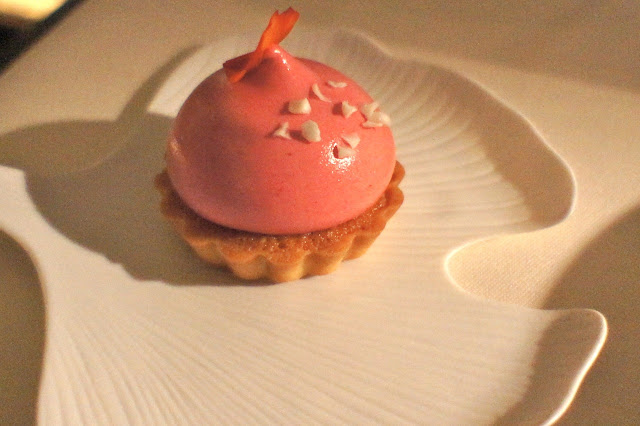 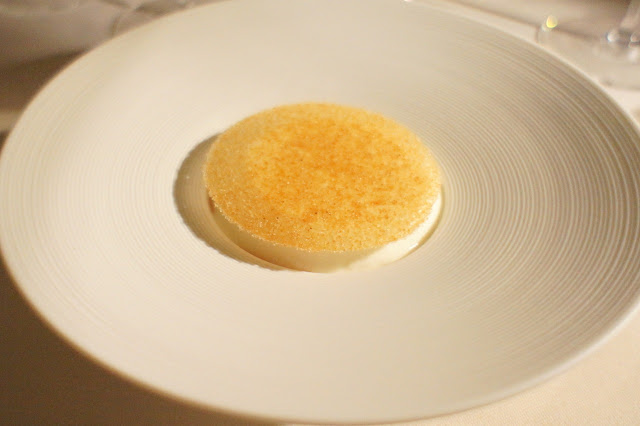 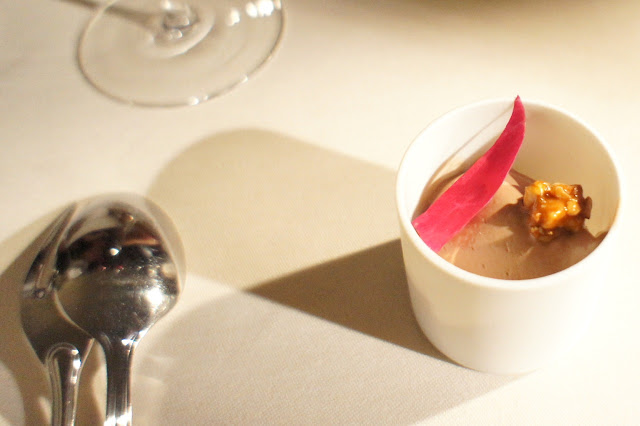 Then we were served a plate of fresh fruits, accompanied with 2 very interesting desserts; firstly, we tried the spicy chili pepper, lemon grass and ginger ice cream, which was delicious. Unlike normal ice cream, this one was not sweet, instead it was spicy. This was followed by the chrysanthemum jasmine eggnog in egg-shell with chestnut madeleines. The eggnogs were delightful to drink (we would drink them from the egg-shell), though we were too full to finish off the madeleines. 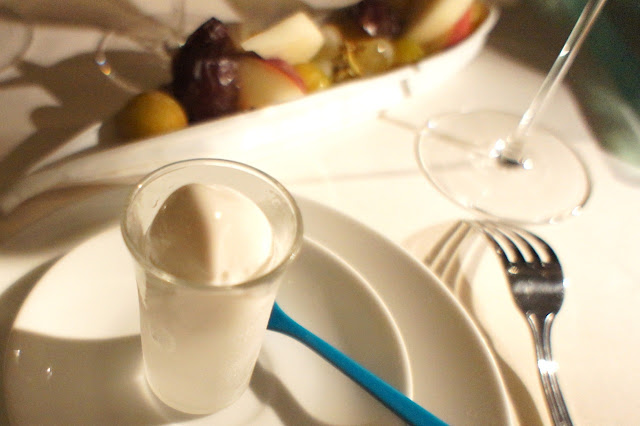 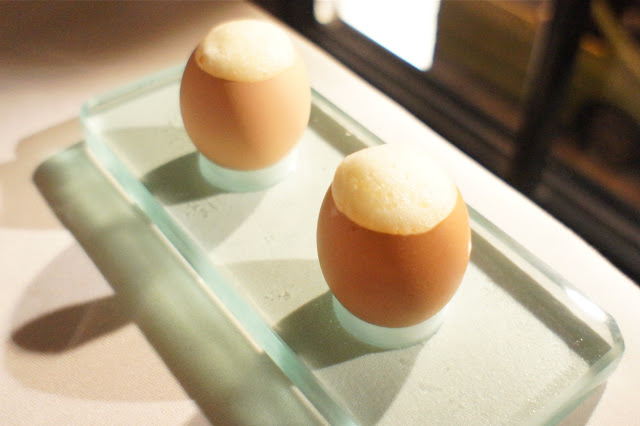 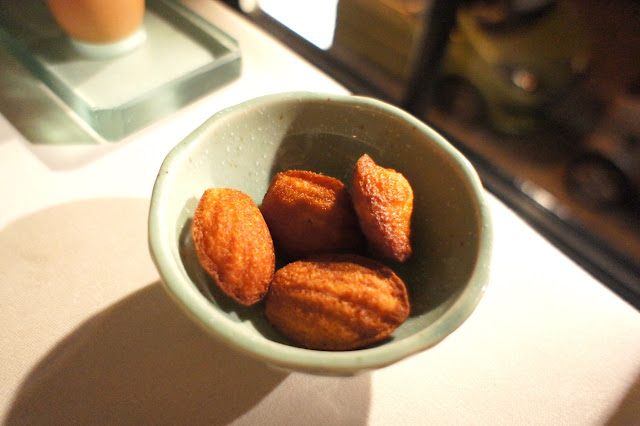 All in all, this was a fantastic dinner, and all the dishes (except for the veal which we found a bit bland) were real winners. This is probably the most innovative and original french restaurant we have dined at. Service here was excellent too, with the sommelier being very helpful in explaining the wine pairing and the maitre d' coming over to chat with us frequently as well (he found it interesting that for such a small restaurant in Paris, they have had quite a substantial number of Singapore guests in recent years).

(Note: If you are wondering why the lighting in the photos looks strange, that's because our table was mostly lit by the street lamp outside. Again, you wouldn't expect this from a 3-Michelin star restaurant in Paris, but then the food was so good that we just laughed it off)

Final Thoughts: The food was very creative with its frequent use of asian ingredients. The bowl which my wife had with the langoustine was chipped in two places, yet this place has 3-Michelin stars; must only be because the cuisine is exceptional, which it was. Despite its lofty position in the universe of Michelin restaurants, the service was relaxed and casual and the staff were friendly and chatty with us throughout the meal. Top top restaurant.
Posted by Smiling Lion