La Ciau del Tornavento is a 1-Michelin star restaurant located in a standalone early-1930s traditional building in a small town of Treiso, close to Barbaresco. They opened at 7pm, and as we were early, we had to sit outside across the carpark on a bench by a school playground with a view of the surrounding countryside (one has to wonder what kind of childhood one would have if one were to go to school in a place like this - it's practically heaven on earth). When we entered the restaurant, we were ushered through the restaurant to the back garden for prosecco and some amuse bouche. The garden overlooks beautiful view of hills and valleys dotted with vineyards. This is clearly a restaurant which stuns you first with its view then stuns you later with its food. 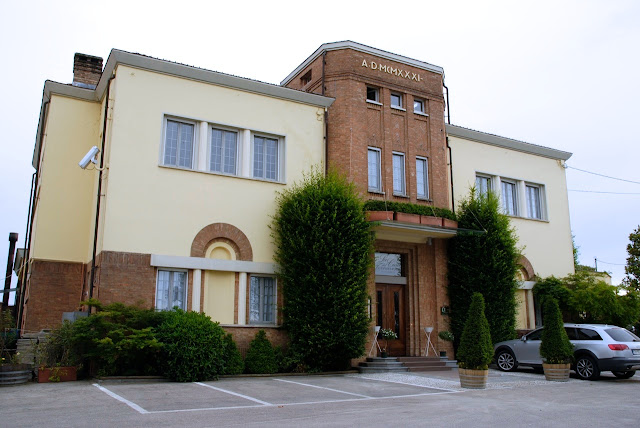 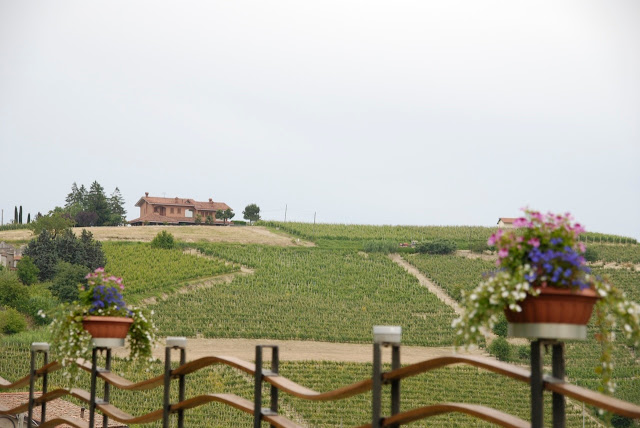 For the amuse bouche, they served a deconstructed pizza (i.e. a shot glass containing tomato cream topped with a layer of mozzarella cream), as well as an interesting leaf battered tempura-style. This was all served to us while we were sitting on the bench in the garden admiring the views and enjoying the cool breeze. 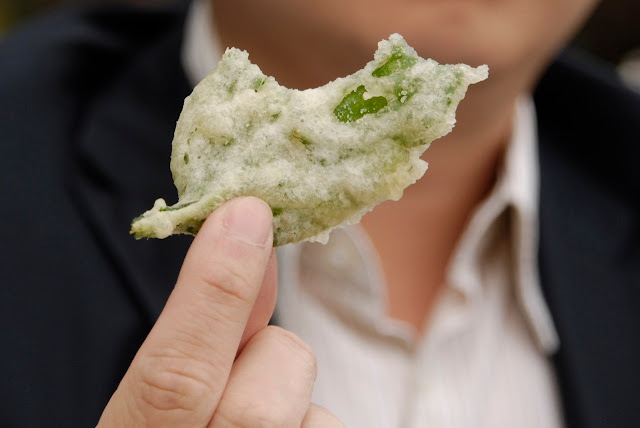 At around 8pm, we were led back to the dining room and given a choice table with a good view of the surrounding countryside. We had originally picked a Paolo Conterno Barolo 2001, but the sommelier was quick to make an alternative recommendation: the 2001 Aldo Conterno Bussia Barolo, which was a stunning choice. Kudos to the sommelier for being so helpful and showing lots of initiative (turned out that the Aldo Conterno was cheaper than the Paolo Conterno, which justified a larger tip for the sommelier!). 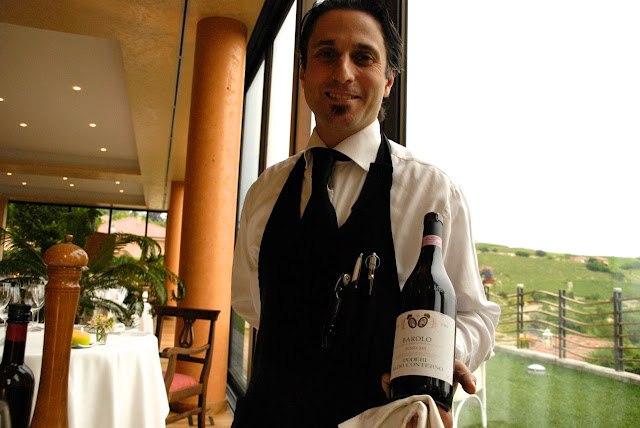 Being in truffle country, we had a choice between the all-black truffle menu or the regular menu, which wasn't a choice at all as far as we were concerned. And we were well vindicated as it turned out. The first course was a simple salad with copious amounts of black truffles and egg yolk sauce, which was an absolute treat as the subtleness of the greens brought out the intense flavours of the truffles and the egg yolk (truffles always go well with egg). In this case, the truffles used were of an extremely high quality (which isn't always in the case in fine dining restaurants which charge a huge premium and serve black truffles that have neither taste nor smell). 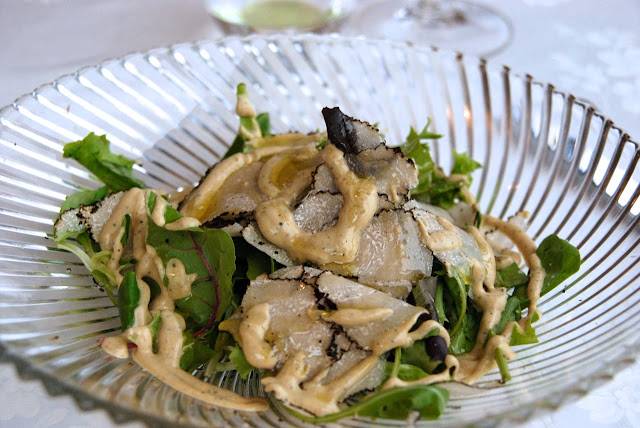 The second dish was the best of the evening: a soup made out of cream cheese, spinach mousse, black truffles and a poached egg yolk sitting at the bottom. A true masterpiece. 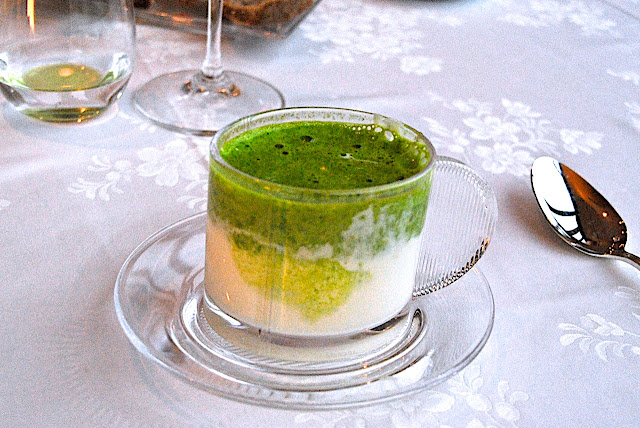 The third dish was the quintessential Piedmont agnolotti "plin" stuffed with 3 different meats with truffle shavings. A delightful pasta dish as the plin was firm without being too hard and had the right texture, and the truffles complemented the eggy taste of the plin very well. 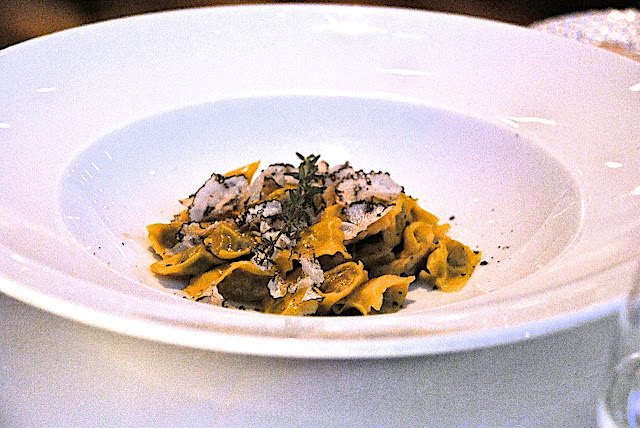 The fourth was a quail stuffed with foie gras in truffle sauce (complemented with a fried egg). It was a very elegant effort and in keeping with the rest of the meal, was light in touch but full of taste. 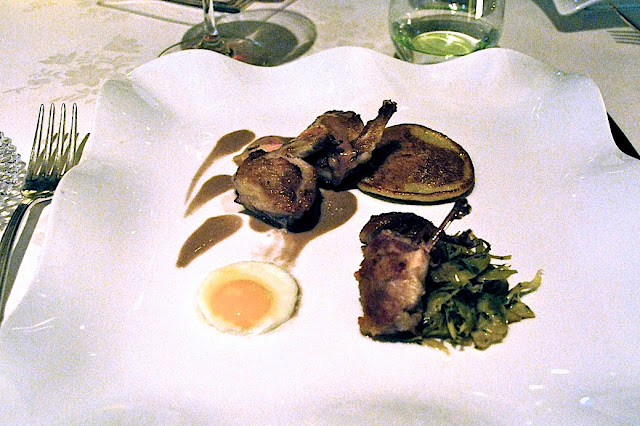 Pre-dessert was a very interesting and refreshing fruit minestrone (the only dish without truffles, we felt so cheated and wanted to complain!). 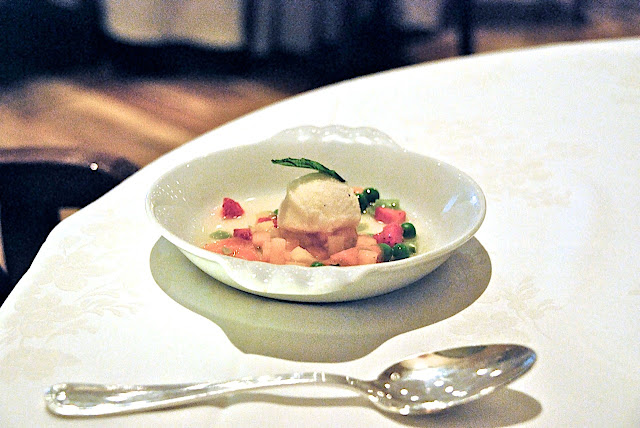 That was a minor 'aberration' and our truffle fix was satisfied with the dessert which was an apple creme brulee with truffles (first time we have had truffles for dessert)! Seemed a bit of an overkill to us but hey, if you are in truffle country, there's no reason why you can't have truffles with everything! 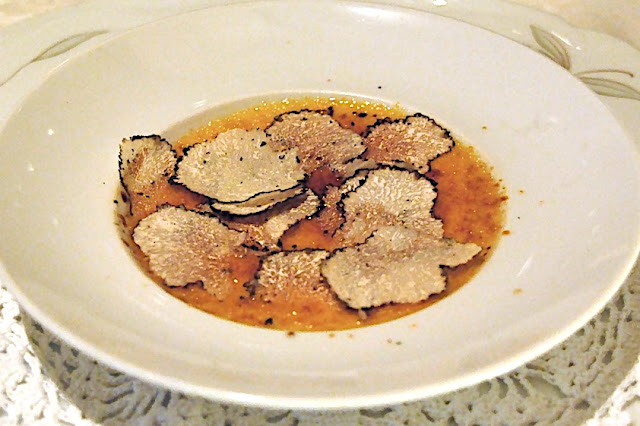 Petit four was a fitting end to this incredible meal. Credit must go to the chef for being able to put together such a great truffle menu, whereby the truffles go well with each and every course. We have had many 'truffle' dinners where chefs simply shave truffles on everything and expect the meal to taste better (very often the food overpowers the truffles so they end up being wasted), but this was a well thought-out meal prepared for us. 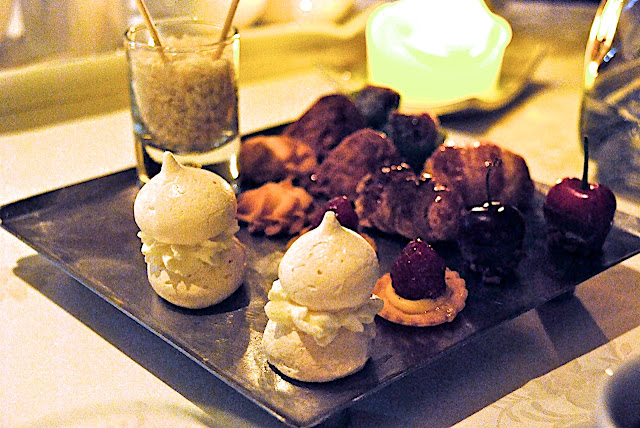 Final Thoughts: An excellent meal, though our judgement was sure to be clouded by the truffles which gave the chef an unfair advantage. Service was first rate and we were treated with much warmth and attention. The dining room was quite grand and had great views but what really stood out was the very extensive wine list which was impressive not only in its depth of Italian wines but also the reasonable prices.
Posted by Smiling Lion